The all-mahogany 000-15 reissue became a cult classic in the Martin range, and the 000RS1 is pretty much an economy version with stage-ready electronics as standard. Review by Rick Batey. 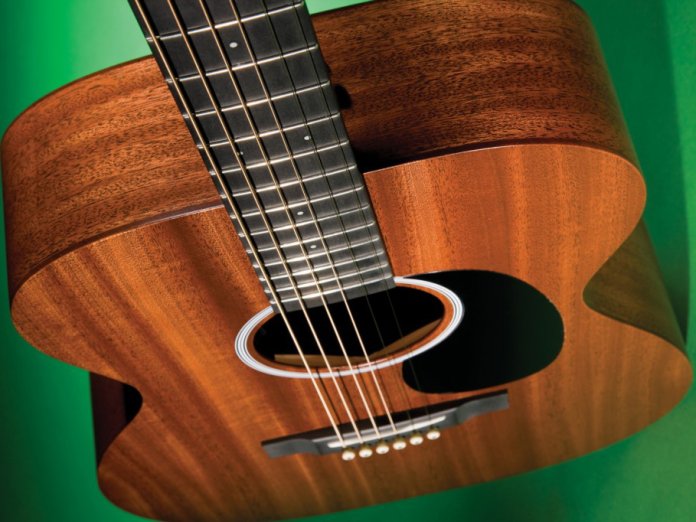 Martin’s affordable Road Series and 1 Series guitars went through some changes over the years, and sometimes it felt hard to keep track of the various specs – solid backs here, laminated sides there, solid-wood necks on this model, gloss tops on others. The current combined ‘1/Road’ Series is a lot easier to get a handle on, and this 000RS1 is the latest model to join a line-up that has served well in keeping the hallowed Martin name available to players at a more affordable price.

The main alteration, about four years ago, was when Martin decided that since savings had to be made, there was a good chance that all-solid top, back and sides in combination with a laminated neck might work better overall than semi-solid body construction with a solid wood neck – and that’s exactly what we have with the 000RS1. The other change is that the current 1/Roads are not made in Nazareth, Pennsylvania, like the original Roads, but in Navajoa, Mexico.

The 000RS1’s top, sides and back are solid sapele, harking back to the hugely successful 15 Series, the Martins that brought all-mahogany body construction right back into the mainstream. Sapele tends to be a little stripier-looking than true mahogany but most feel that to all intents and purposes it’s tonally indistinguishable; our 000’s back is two-piece and slightly veed, the top is also two piece but more straight-grained. The all-over satin finish suits it well, as does the lack of any body binding; it’s a folky, minimal look, although the soundhole rosette is a somewhat stark white. 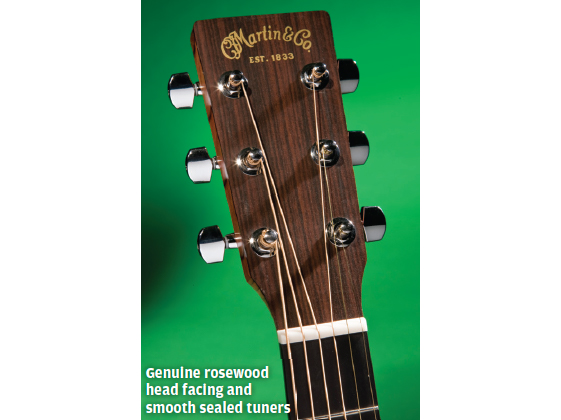 The bracing is the ‘A-frame X-1’ which has an X-brace with an A-shape pointing from soundhole to neckblock, an angled bridgeplate, and simplified struts that are not scalloped, but tapered towards the ends; essentially, it’s minimal in the lower bouts and sturdy in the upper bouts. The back bracing is regular, and there’s no central backstrip.

In Martin’s world the A-frame goes hand-in-hand with the mortise-and-tenon neck joint, and the 000RS1 also has a ‘Rust Stratabond’ neck. Stratabond means multi-laminated, like certain Framus guitars from the ’60s, with around 20 strips making up the width at the nut. ‘Rust’ means it’s tinted in production, and not all the strips reflect the colour evenly, but we quite like the look, as we also like the Modified Low Oval neck shape and the nicely-fitted bone nut. The fingerboard and the bridge are Richlite, an ebony-imitating phenolic resin; the frets are narrow and vintage-style, and though the nut width is only 1 11/16″/42.8mm, it feels just about roomy enough, as does the 2 1/8″ spacing at the bridge.

One slightly surprising thing – especially for a brand-new Martin –is that there isn’t much saddle left. With a current action at the 12th fret of 2.8mm on the bottom E and 2.4mm on the top you wouldn’t be considered nuts for wanting it to come down a smidge, especially if you’re a fingerstylist with a light touch. The saddle, though, is a mere 2mm high, which allows sufficient adjustment at the moment but might not do so at some point in the distant future. It’s not a huge warning bell, but worth mentioning. Final details: the 000RS1 comes with a strap button at the heel… top marks. Electronics are taken care of by the Fishman Sonitone system; the tuners are sealed units and very smooth, and the strings are .012″-.054″ Martin Lifespans. 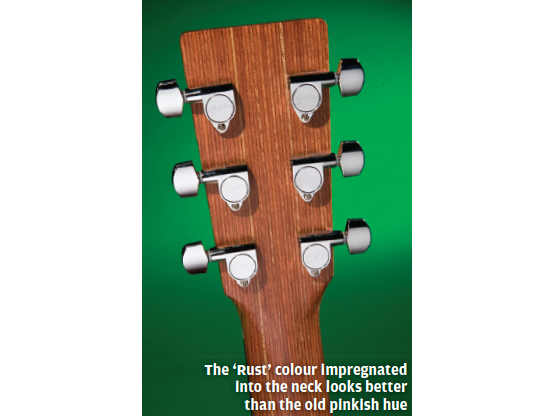 Sound
With a 14-fret long-scale 000 you know what you’re going to get: brightness, balance, and a sound well suited to the fingerpicker or finger/pick player. The 000RS1 once again shows’s Martin’s skill at providing a Martinesque sound even on a guitar with many non-traditional elements built two and a half thousand miles away from Nazareth, PA. It’s bright, sure, but it’s got a good sense of softness to the trebles, bouncy, wiry mids and a nice solid bottom string. Volume is medium, the sustain is good.

The killer question, of course, is – does it sound like a 000-15M? Well, to a degree, yes. It’s got a dry, sweet, slightly compressed, mid-focussed tone and it’s very much in the same ballpark, as our US cousins would say; not quite the same openness or sensitivity, we’d venture, but they say you can’t remember a precise sound for longer than seven seconds, and it’s been a heck of a lot longer than that since we picked up a 000-15.

So, it sounds pretty good. 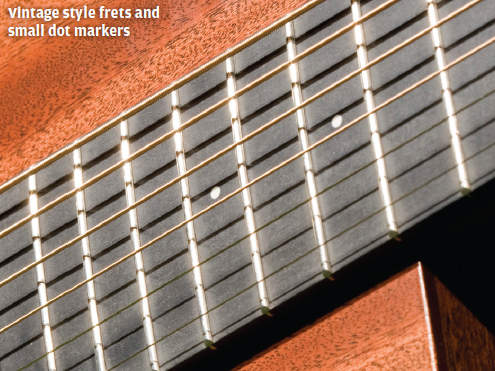 We’ve reviewed the Fishman Sonitone before; it’s a simple flexible braided undersaddle piezo linked to soundhole-mounted volume and treble controls. The sound is typically Fishman, string-to-string balance seems fine, and the soundhole controls aren’t that easy to tweak but their invisibility is laudable. The two drawbacks are the fabric battery pocket, which no fun to access without removing all the strings, and the lack of proper multi-band EQ, not to mention phase reverse, but it’s good enough to allow you to jump up at an open-mic night and get a decent level while having control over a degree of top-end zing. Aside from that, you’ll be depending on an outboard preamp – or the whim of the sound person. 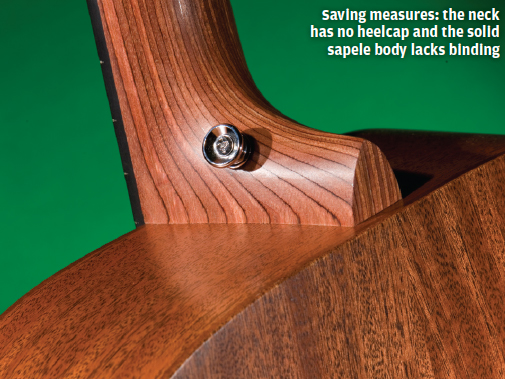 Verdict
The 1/Road Series is a well-honed part of the Martin range, slicing spendy production processes without sacrificing the most vital tonal factors or build quality. The new 000RS1 undercuts the gloss-top, sitka-belly, scalloped hybrid X-braced OM-1GT in price while adding a useful flavour to the line.

This guitar sits at a delicate point – risking, perhaps, the emigration of the trad-minded customer to whom the idea of phenolic fingerboards and multi-laminate necks just doesn’t seem right. It’s also unlikely to win the electro race with those who need fine onboard EQ control, but conversely likely to attract those who reckon that an all-solid mahogany body, a nice sound, a simple pickup system and the Martin name adds up to a pretty tasty deal. 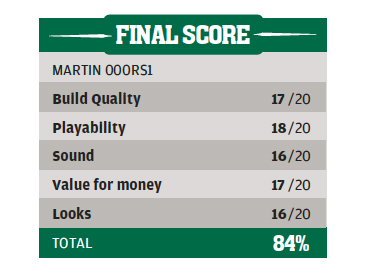