A relatively new name to the guitar-making scene comes with a strong pedigree. 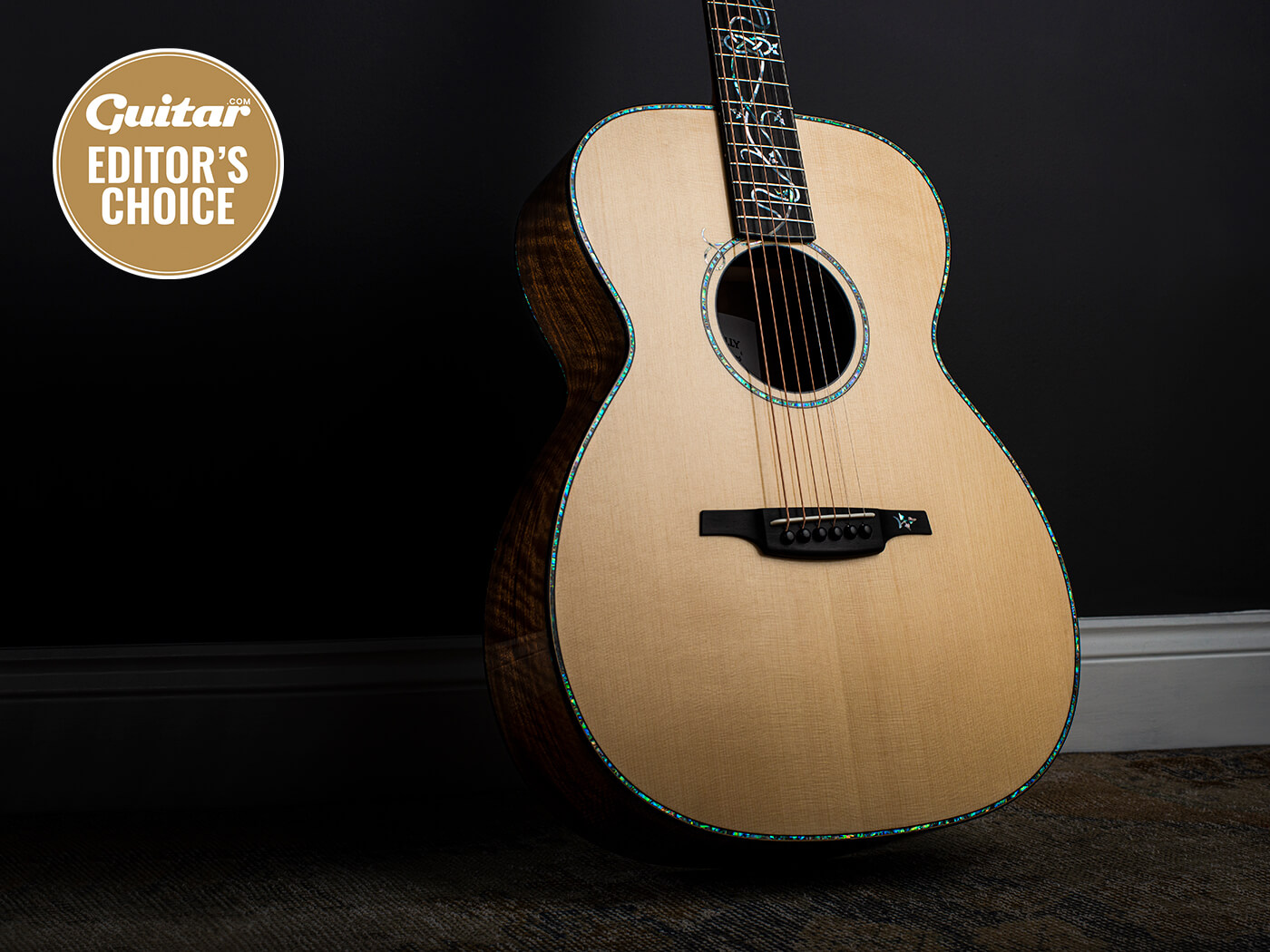 A powerful and expressive instrument from a young luthier who shows a great deal of promise.

Ciaran McNally began his career as a luthier at the tender age of 16, studying at the Lagan Lutherie School in Northern Ireland. Now 29, McNally spent the interim years working at two of the UK’s most august acoustic institutions – Lowden Guitars in Downpatrick and Atkin Guitars in Canterbury. McNally now builds independently from his workshop in Craigavon, County Armagh, and though he has made more than 300 complete instruments during his career to date and has had a hand in over 1,000 builds, our review guitar is only the 45th created under his own name.

Given the number of mid-size guitars on the workbenches of luthiers around the world, the Orchestra Model appellation can now mean just about anything from an ultra-traditional, Martin-inspired instrument to a futuristic Somogyi-style art piece. Considering his pedigree, it’s no surprise that Ciaran McNally takes inspiration from both sides of the Atlantic, perhaps leaning more towards the USA. This elegant guitar, with its slightly deeper body and tapered headstock, is certainly more Santa Cruz, California than Nazareth, Pennsylvania. 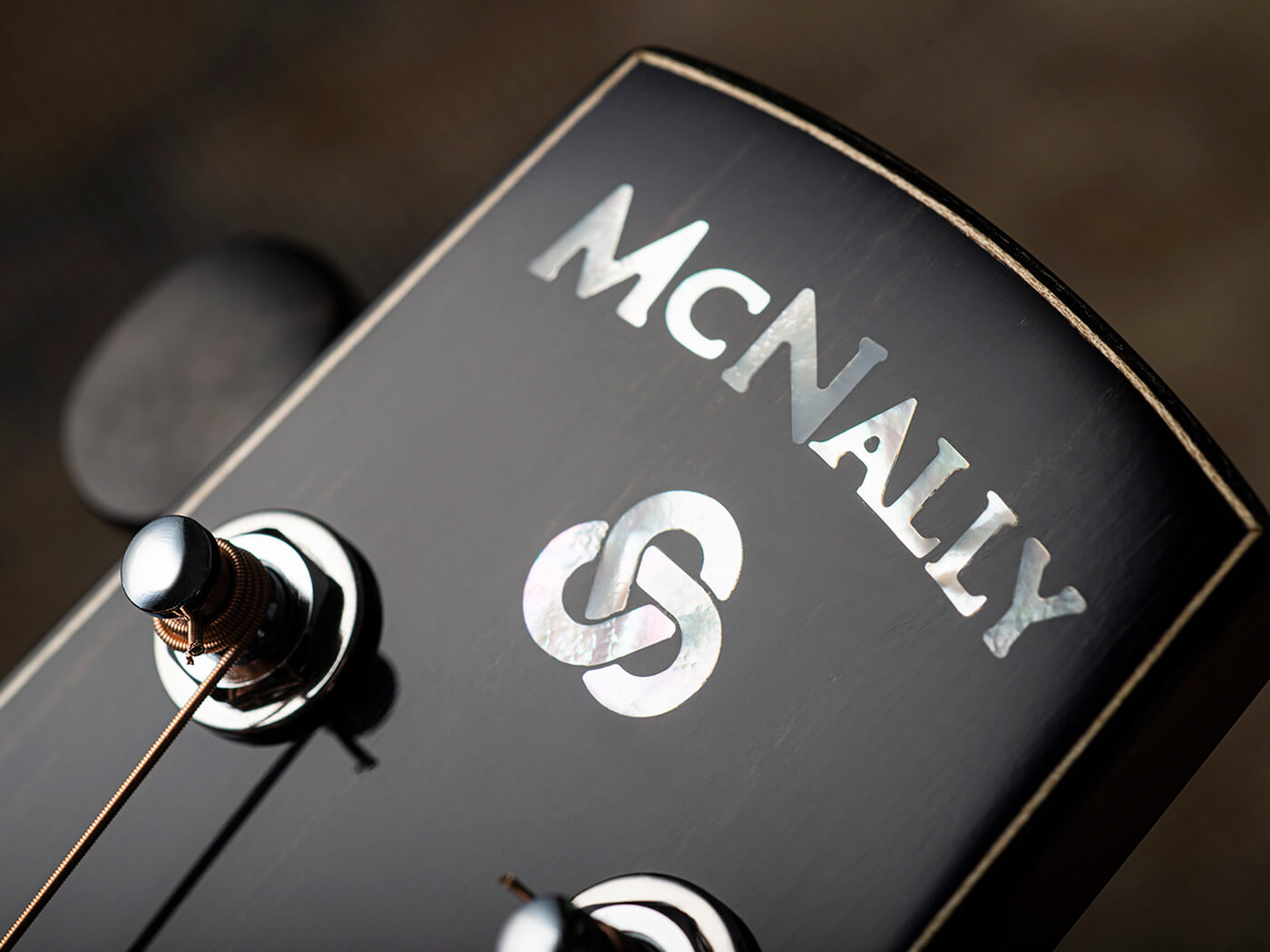 The combination of an Adirondack spruce soundboard with walnut back and sides can be wonderful in the right hands, especially when used in a medium to large body. We’ve found it most effective in the work of luthiers who blend modern and traditional techniques such as Vermont’s legendary Froggy Bottom Guitars and, as we’ll learn, Ciaran McNally.

It’s immediately clear that McNally not only knows his woods but has an informed grasp of what works within the context of his own guitars. He also has an eye for quality – the set of English walnut chosen for the back and sides (that’s Juglans regia for the uninitiated as opposed to the more common Claro and black walnut varieties) is superb, with a deep 3D chatoyance and a slight gold-green sheen to the back that lives up to the guitar’s name. The creamy white Adirondack soundboard (braced with baked European spruce) is flawless and vibrant with a deep, resonating sweet spot behind the bridge. 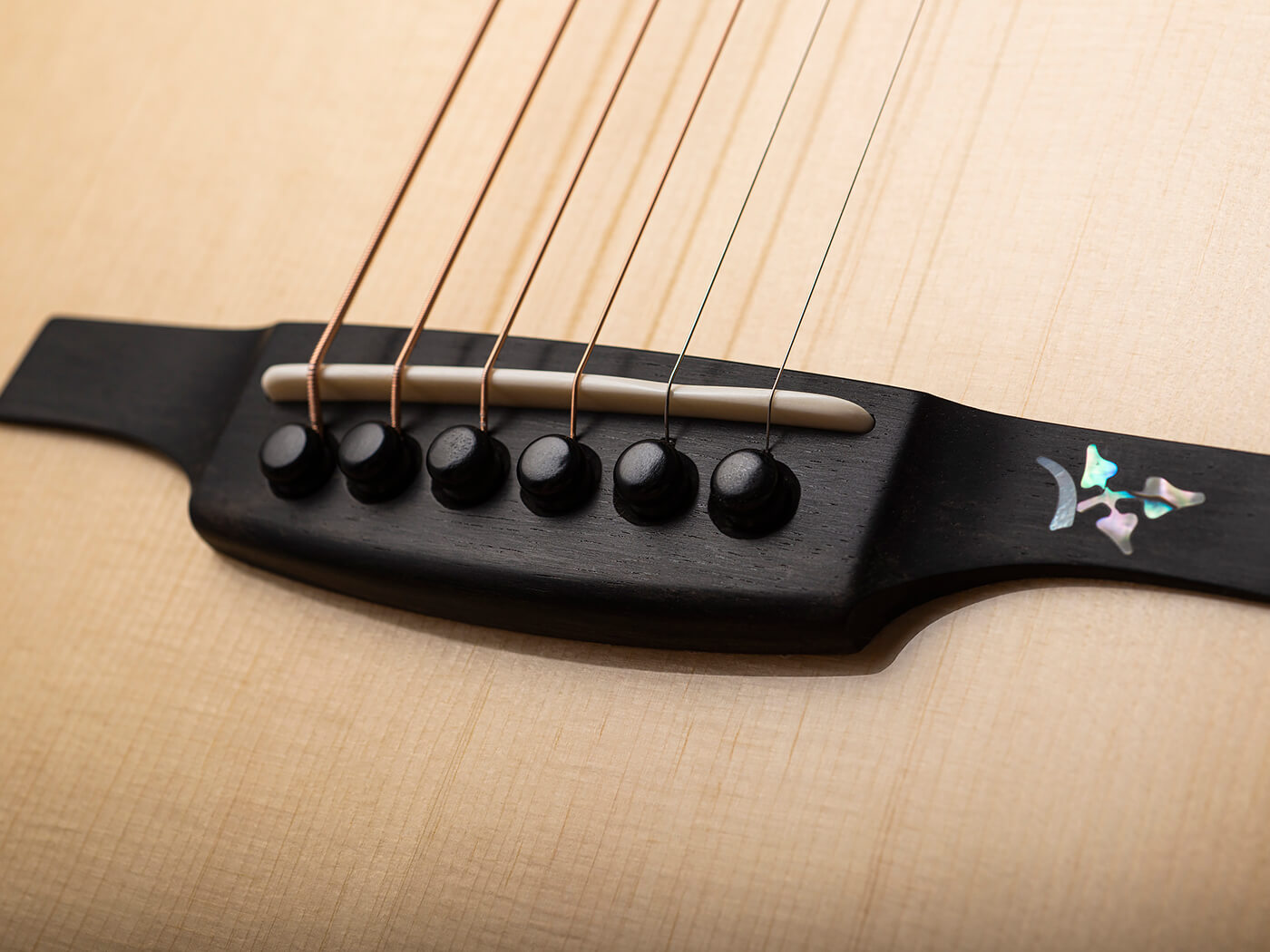 But for the lack of laminate construction, the 14-fret mahogany neck looks like it could have come from a Lowden in both colour and finish. It’s a girthier squeeze than you’d usually find coming out of Downpatrick, though, with a deep ‘D’ carve that fills the left hand beautifully. The heel starts to flare before the 12th fret and the neck itself has already reached a depth of 26mm at the 10th fret. It’s robust, solid, and inspiring, but we would have liked to see something other than a single side dot to mark the octave. McNally can, of course, carve any neck shape with any markers you’d like if you are considering a custom order.

The Celtic Ivy OM of course takes its name from the intricate abalone inlay work which adorns the entirety of the ebony fretboard with delicate tendrils extending onto both the headstock and the rosette. It’s a flowing, organic design that brings together European and American luthiery flourishes, the single ivy leaf inlaid into the sculpted ebony bridge being a particularly nice touch. There are a couple of small areas that could use a little ebony dust and Super Glue to fill the gaps but that’s the work of a moment. The abalone theme is reinforced with full top, back and sides edge-purfling in shining rainbow abalone. 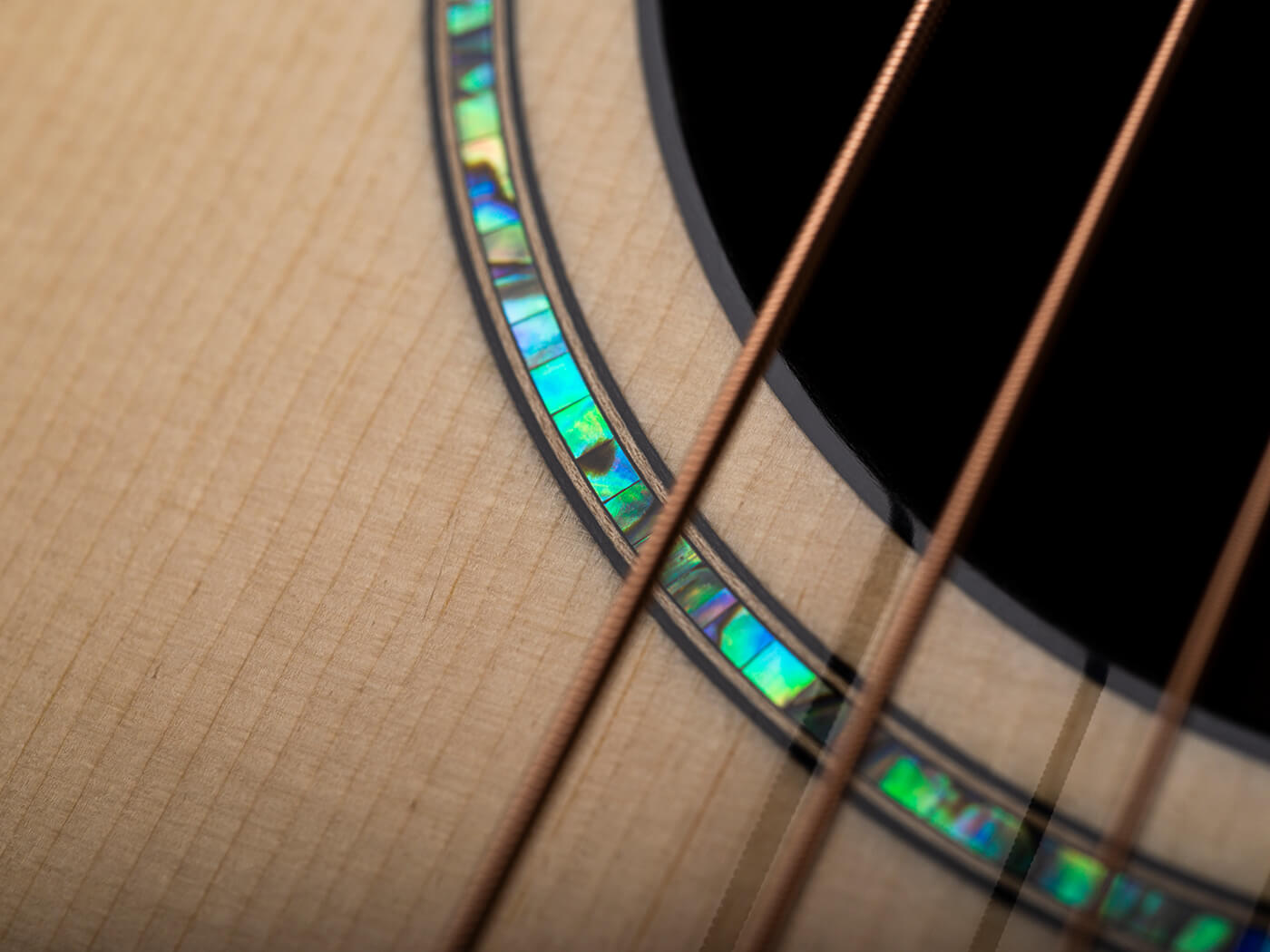 The McNally arrived with its strings slackened off for transit and simply getting it to concert pitch reveals a great deal about the instrument’s character.  This is a powerful guitar but it remains balanced across the register. The trebles are crisp and detailed along the length of the neck and the midrange is woody and expressive.

Walnut tends to lend a fundamental quality to the note and this is perhaps most noticeable in the Celtic Ivy’s bass response. This is no pillowy Bay Area ‘woomph’, instead we are greeted with a stentorian ‘bong’ that remains articulate and sonorous up the neck without overpowering the rest of the sonic spectrum.

Tonewood controversy is most assuredly a thing, and there are no shortage of internet-poisoned individuals who will dismiss Adirondack spruce as needing time to open up. That may /occasionally/ be true in the context of production instruments made in numbers, but in the case of the McNally, we have a prime example of how a skilled luthier will bring the best out of their carefully selected materials, creating a guitar that sounds impressively good from day one.

DADGAD immediately feels like the Celtic Ivy’s natural habitat and this guitar really does shine in dropped and altered tunings. The fast response of the lightly braced soundboard in conjunction with the 25.4-inch scale length making this an immediate and inspiring instrument for the solo fingerstyle player. Complex chords ring with gravitas and grace, and single-note lines come through with enough power and focus to make their point unaccompanied. Critically for some positions, the nut is smoothly carved with no sharp corners. 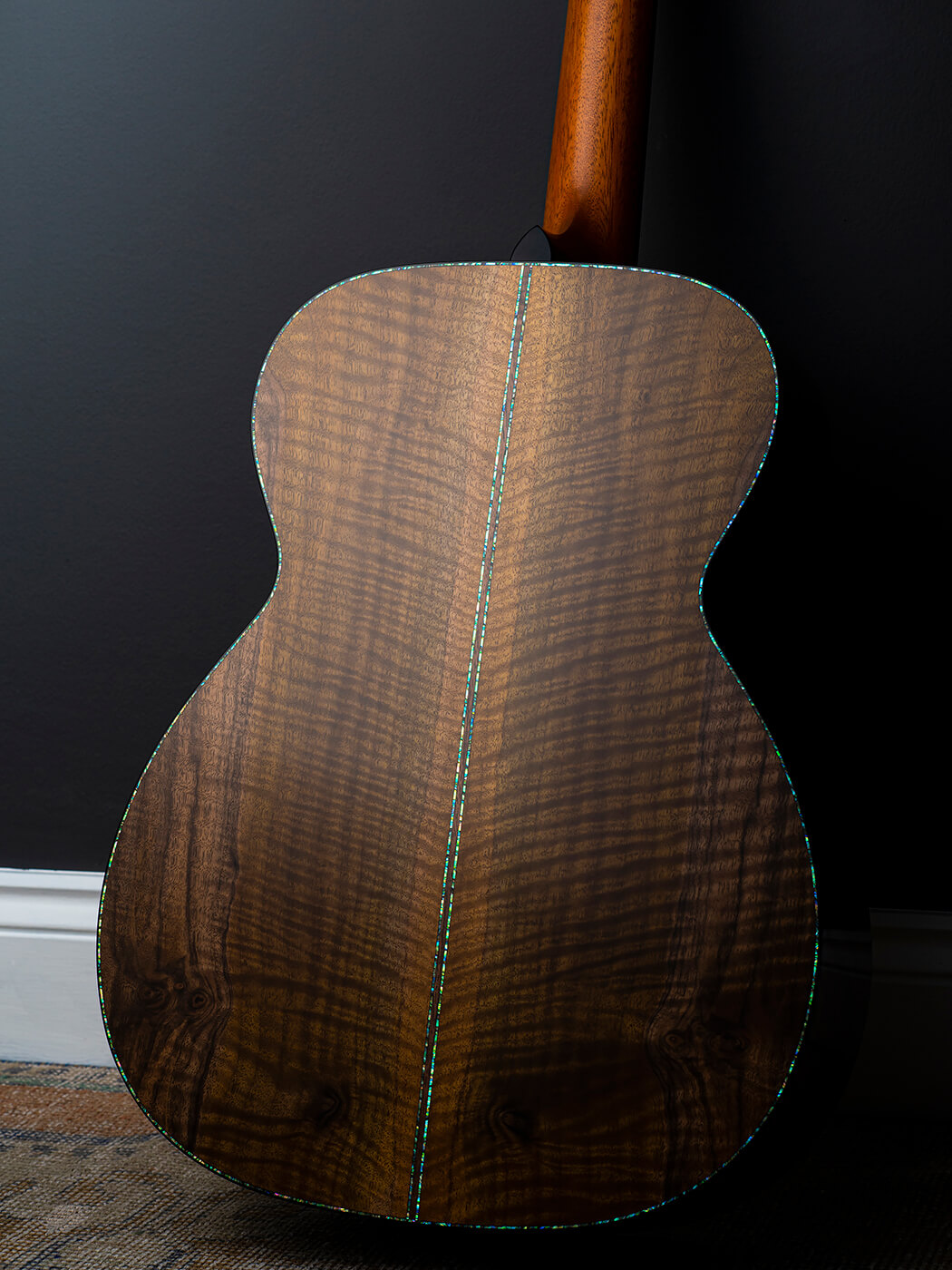 Many have tried to make a convincing marriage of transatlantic styles of luthiery but few have succeeded in the custom acoustic guitar world – it’s an interesting scene where clients often spend more on tonewood upgrades than Ciaran McNally currently charges for a finished instrument. It’s also a market that demands the highest standards of fit and finish and there’s still some scope for improvement in the more nuanced aspects of this guitar’s execution. The headstock logo and maker’s name inlay for example feel a touch ungainly when compared to the delicate inlay work on the rest of the instrument, and the fret ends could use another kiss with a file on the treble side, but it’s an impressive shot across the bows.

On the basis of sound alone, a McNally Orchestra Model, even in full presentation format, represents exceptional value for money. At his current price-point it would be no surprise to see Ciaran rising further up the ranks in the acoustic luthiery scene – we very much look forward to seeing what he does next.