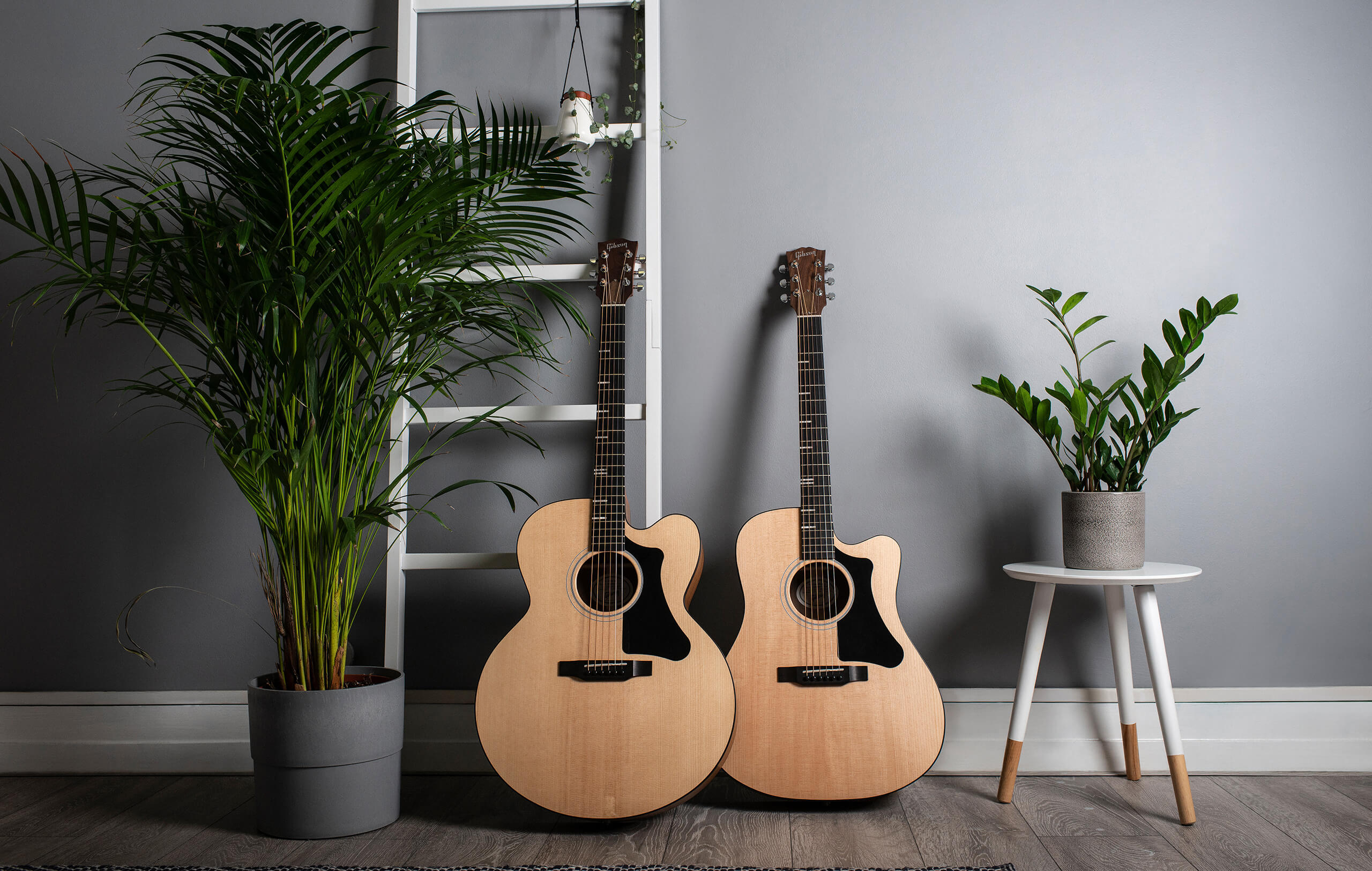 It’s always the way, isn’t it? You wait 120 years for Gibson to make an acoustic guitar with a shoulder-mounted soundhole and suddenly four come along at once. Last time out we explored two of these new models, the fully acoustic G-00 and G-45. Here, we’re looking at the upper end of this nascent range with the G-200 EC and G-Writer EC, both of which apply the minimalist Generation Collection design language to existing Gibson designs.

While the callipygian silhouette of Gibson’s J-200 needs no introduction whatsoever, the same is not necessarily true of the Songwriter model. This slinky dreadnought outline – originally designed by Ren Ferguson – first emerged in the 1990s in the Gibson Custom Line series before becoming the Songbird and finally the Songwriter. 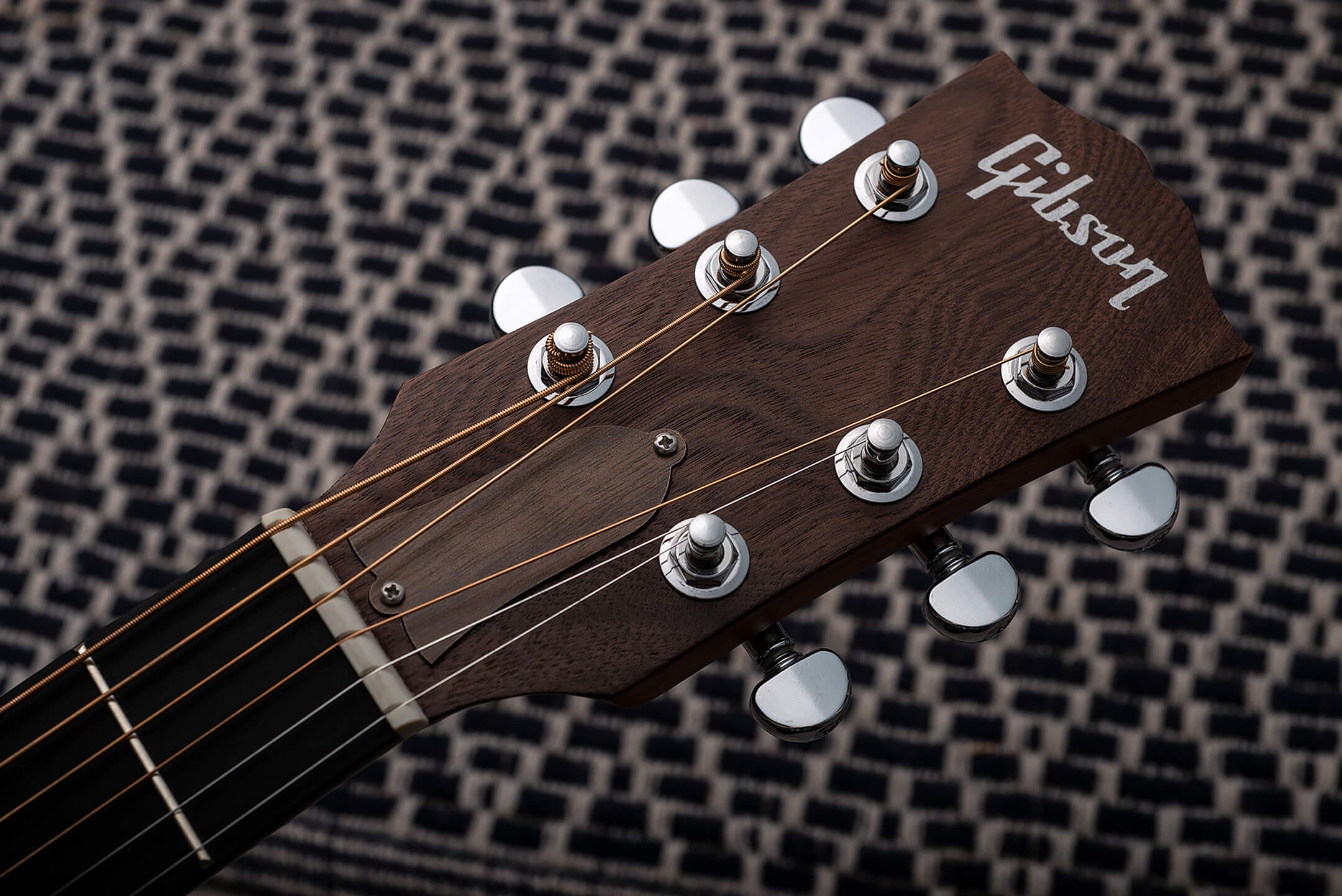 The Generation Collection, made in Gibson’s dedicated acoustic facility in Bozeman, Montana, is inspired by a recently discovered blueprint from the Gibson archives. Dating back to 1964, the ‘Modern J-45’ never went into production but the design featured a large circular sound hole in the lower bout. Gibson has since done extensive research culminating in the Player Port, an elliptical plastic-edged soundport in the shoulder of the guitars in this range.

As with the other Generation Collection instruments we looked at, the Player Port also functions as a handy viewing port. Peaking through it reveals not just the X-bracing and two tone bars but also internal construction that’s a little rough and ready. That said, we loved the sonic impact that the Player Port design had on the G-45 and G-00 so it will be fun to see how it works here.

The G-Writer and G-200 take things up a notch in terms of both functionality and aesthetics. Each has a Venetian cutaway, more elaborate bar inlays on its striped ebony fretboard, body binding and an LR Baggs Element Bronze pickup system. As with the other models in the range, the back and sides are made from figured walnut, the soundboards are Sitka spruce and the bodies are a little slimmer than usual.

The necks are made from utile – an African mahogany often referred to as sipo – carved to Gibson’s Advanced Response profile, which in real terms is a slim and slinky C shape. The ebony ’boards and bridges of both guitars are well cut and the fretwork is uniformly smooth.

Unable to resist the call of the jumbo we begin our playing session with the G-200. Now, here’s the thing about the SJ-200 and its variants – despite its size, it is not by nature an excessively loud guitar. Instead, what you can expect is a rich sound by virtue of the size of the chamber with a slightly ponderous response as the large soundboard flexes with each new attack. This fact has led collectors of vintage J-200s to refer to them as “whispering giants”.

This G-200 doesn’t so much whisper as growl. Maybe it’s the walnut back and sides which can often lend a more immediately musical response to a factory-made acoustic guitar than maple. Or maybe it’s the slimmer body, maybe it’s the Player Port, maybe it’s the longer 25.5” scale length, or a combination of all these things and more. But what rises up is a big sound with a faster attack that we’re used to from a jumbo.

There is a slight imbalance towards the low-end, however, meaning that bass notes within a chord will often last longer than the mids and trebles. This is particularly marked in root six barre chords further up the neck. Open strings are loud and vibrant but once again there is a contrast with their fretted equivalents. It’s subtle but discernible, especially when playing fingerstyle. Once you take a pick to the G-200, however, the clouds part and a chunky rhythm personality reveals itself which, rather like an orchestral gong, works best when you warm it up a little.

Slipping into DADGAD is a smooth process – the well cut nut and Grover Mini Rotomatic tuners make sure of that. The extra sympathetic resonance of the octaves does make things a little mushy when playing intricate pieces but conversely works very well indeed for slow airs and other expressive contexts.

This is still a very big guitar, though, and playing it seated for extended sessions can lead to fatigue in the right shoulder for shorter players. This is much less of an issue when playing standing, and an added advantage of this approach is that the guitar’s lively back is effectively decoupled from the top when in full contact with your body. This calms down those rogue bass frequencies to some degree.

You don’t call a guitar the Songwriter without being extremely confident of its capabilities as an instrument to serve the vocalist/instrumentalist. This instrument’s ancestor, the CL model, was intended as a direct competitor to the Martin dreadnought that saw a resurgence in the 1990s due in no small part to the MTV Unplugged series. 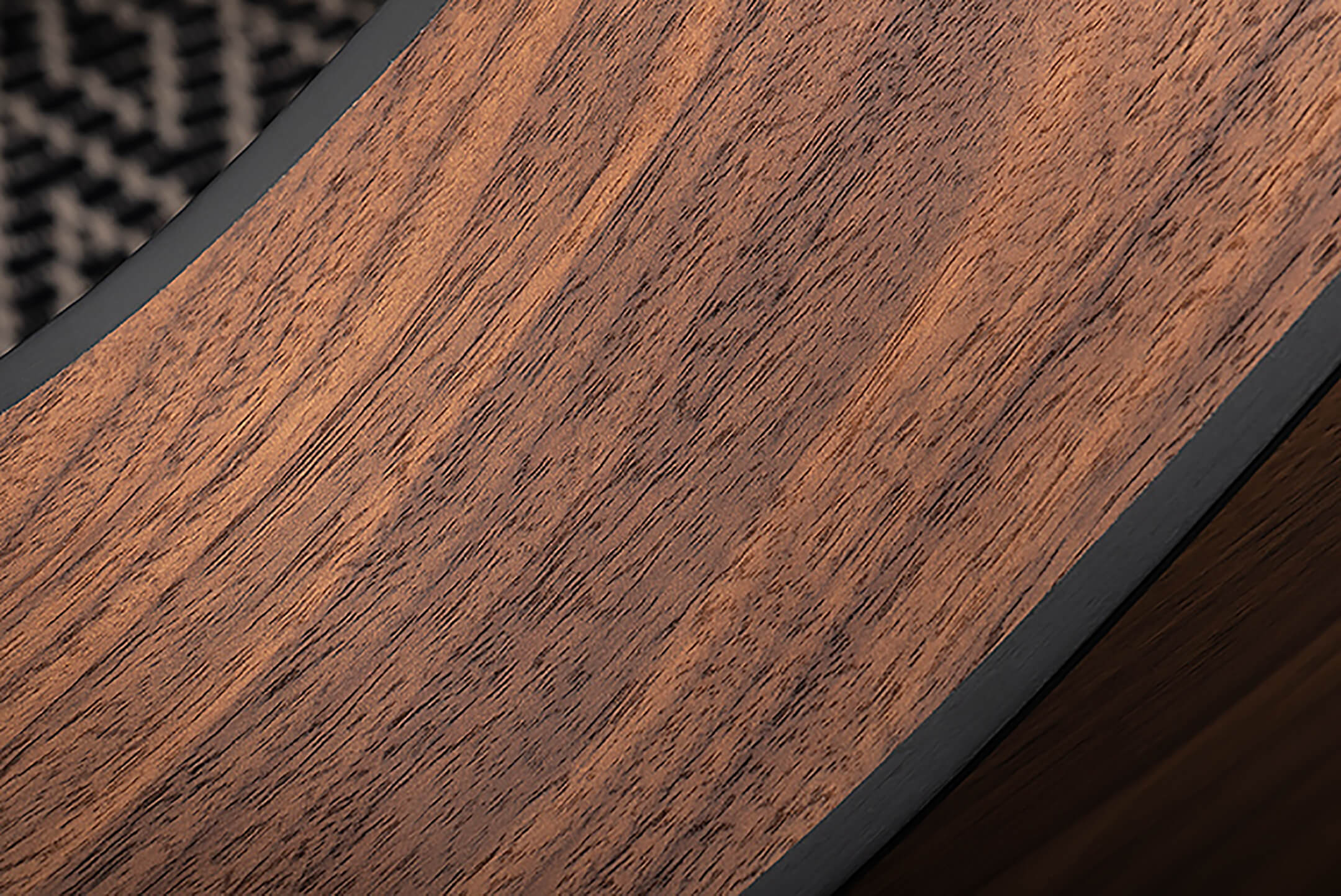 Despite the 25.5” scale length and square-shouldered body shape, the G-Writer feels and sounds very Gibson. There is a distinct sparkle to the treble strings in open chord sequences and, despite its intended purpose, it makes for a very capable bluegrass flatpicking machine. Where it really excels, though, is with the gentle fingerstyle and expressive strumming typical of the Simon & Garfunkel meets Bon Iver school of modern folk balladry.

Once again, the application of altered tunings reveals new facets to the guitar’s character. It turns out The G-Writer just loves C tunings, revelling in the depths of both Orkney and C sus4 while maintaining the same detail and articulation we experience when in standard tuning. 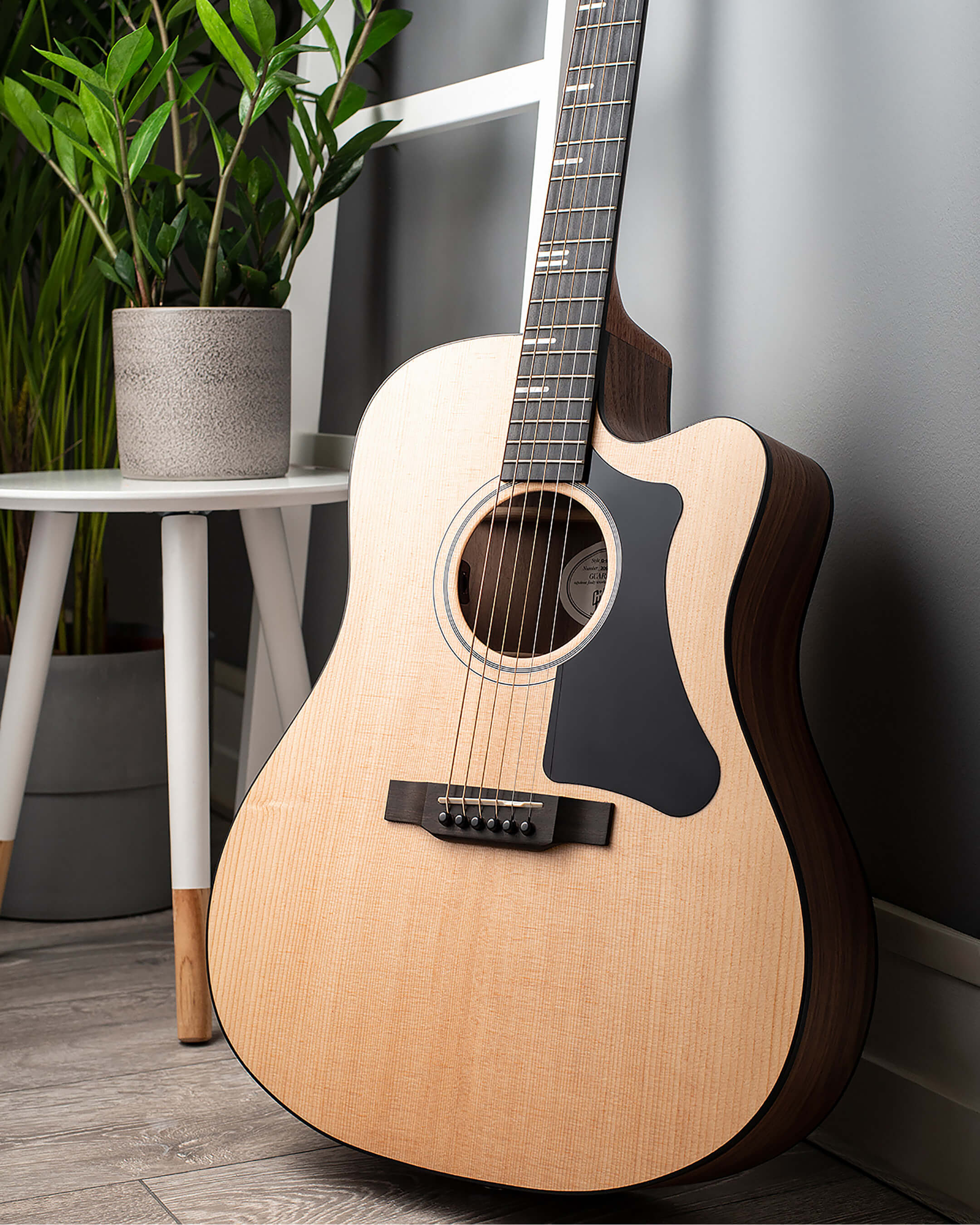 While the LR Baggs pickup sounds convincing with a little EQ and reverb, we do notice that these instruments are more susceptible to feedback than their non Player Port-equipped equivalents. We understand, however, that a full range of accessories for the Generation Collection is planned which includes various feedback-busting devices optimised for stage use. Bring it on! 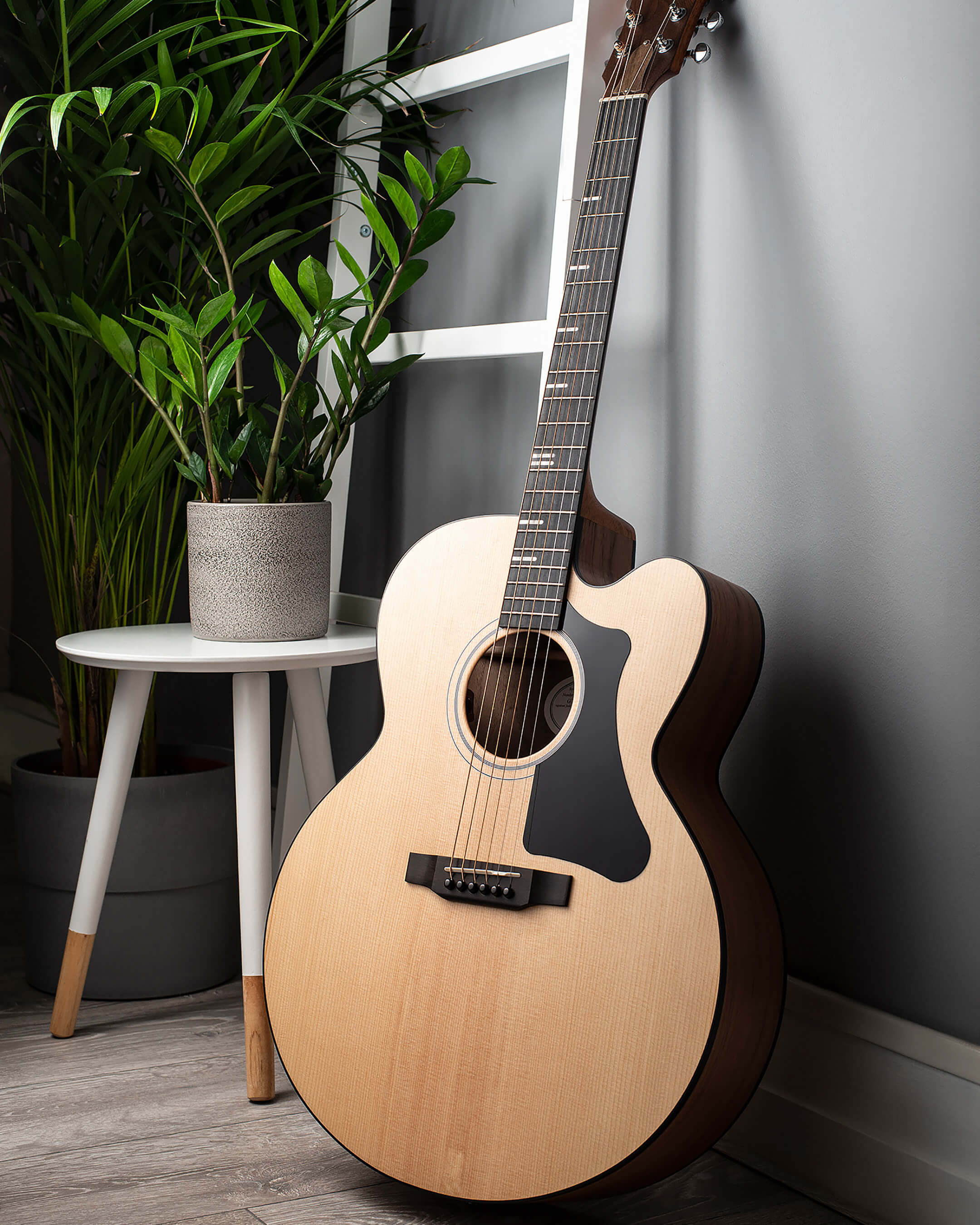