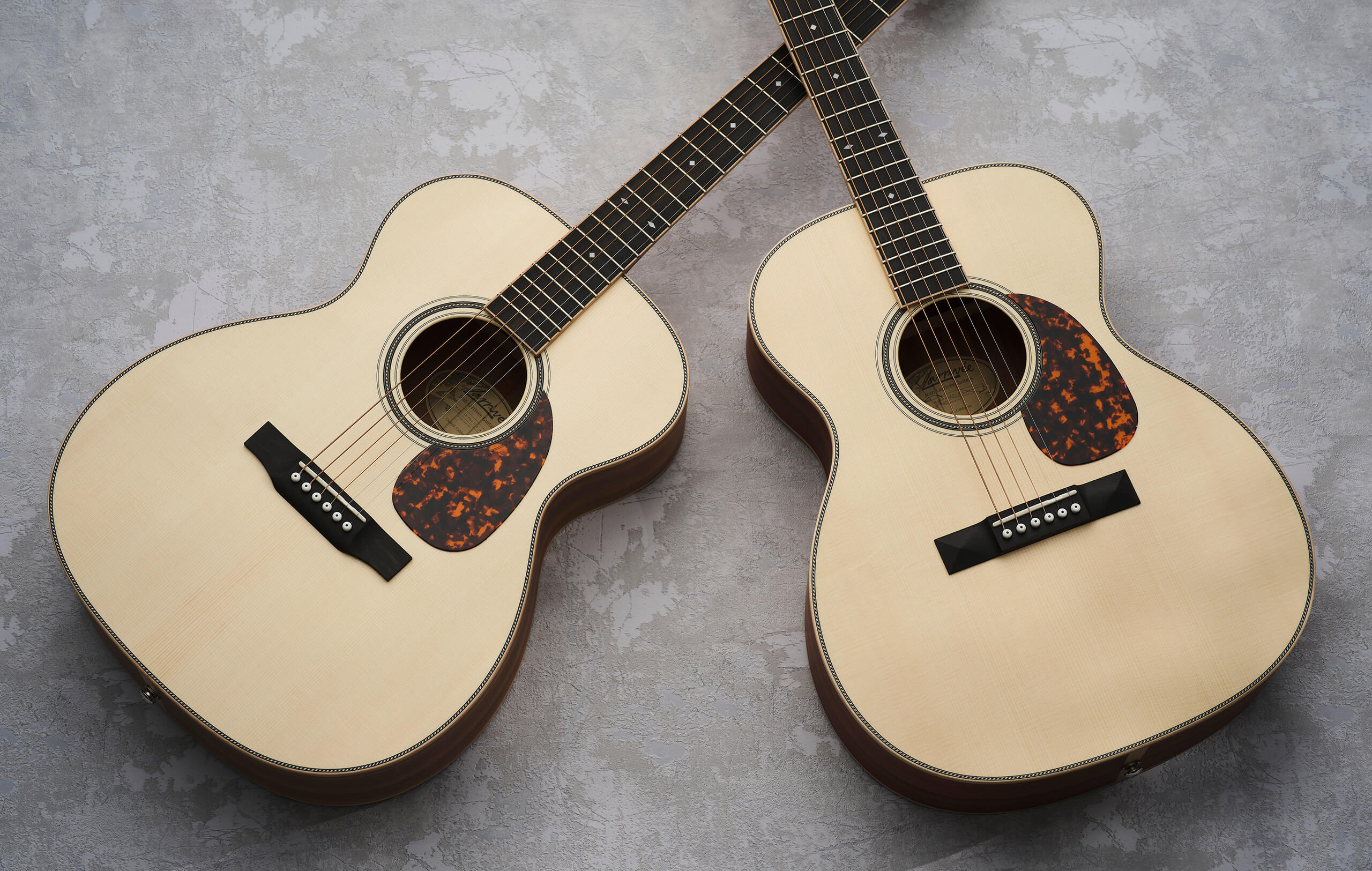 With moon-harvested tops and silken tones, Larrivée’s new OM guitars are as flexible as they are stylish.

Established in 1967, Larrivée’s Toronto workshop quickly became a centre of excellence for acoustic guitar making, with alumni such as Linda Manzer, David Wren, William ‘Grit’ Laskin and others joining Jean Larrivée himself in the pantheon of luthiery greats.

Now based in Oxnard, California, Larrivée continues to walk the path of characterful hand-made guitars with an extensive range of instruments that blend vintage and modern designs and processes.

Our guitars for this review are essentially two flavours of the same instrument: Larrivée’s popular OM model, which brings a tweaked approach to bracing as well as a matte-finished, wood-binding aesthetic to the original Martin Guitars design. We have one OM with back and sides of Claro walnut, and another that sports Hawaiian koa back and sides, as well as an ebony pyramid bridge and a custom abalone vine inlay on the headstock. These specs alone would usually be enough to quicken the pulse of even the most jaded acoustic enthusiast but the real kicker comes in the choice of the soundboard wood: moon-harvested European spruce. Exotic!

Even if it has become something of a buzzword over the past decade, especially in the world of luthier-built steel-string guitars, the use of wood harvested according to the lunar cycle has been an integral part of European instrument-making for centuries.

This traditional approach involves cutting the tree when the sap is at its lowest. The trees are then arranged facing downhill so that any remaining sap deposits run into the branches, which are then removed, leaving an immaculately seasoned trunk – lightweight, strong and just the thing for a responsive steel-string soundboard. This wood has long been the preserve of sole-luthier workshops so it’s good to see it filtering towards the mainstream now.

Aside from the back and side woods, and the koa guitar’s bridge and headstock upgrades, there is little to tell these two instruments apart. Fit and finish on both is close to immaculate and the standard of materials is high. The walnut is not the most figured set we’ve ever seen – there’s just a little of that familiar Claro figure on the back. The same is true of the koa guitar, which features a back and sides more reminiscent of wood used by Martin in the 1920s – wide, dark stripes – than the crushed velvet koa sets so beloved of the instagram #Loothing community. Either way, we can’t escape the feeling that Larrivée is guided primarily by sonic considerations in its choice of wood – just as we’d hope.

We kick off with the walnut guitar in standard tuning. Playing fingerstyle, the opening notes are beautiful even for such a young instrument. The bass and mids are perhaps most persuasive, with a beautiful breathy quality throughout the satisfyingly wide timbral range. By contrast, the treble response is a touch raw, which is typical of guitars with a 650mm scale length, especially so early in their lives. There’s every chance things will smooth over with time. That said, we would never recommend buying a guitar in the hope that its voice will change.

Introducing a medium-gauge pick demonstrates the charms of an OM as an instrument to support vocals. There’s a real sweetness here. But don’t expect a bluegrass cannonade – this guitar is a lot more James Taylor than Molly Tuttle. But that should come as no surprise. While moon spruce is prized for its nuance and detail, if you’re looking for headroom then Adirondack spruce is often more convincing.

Moving into DADGAD, we find much of that aforementioned detail on tap. The bass lower mids are articulate and musical, and the lower frequency range and more relaxed string tension go some way towards taming the treble end into something very attractive indeed.

Resisting the urge to make massive, sweeping generalisations about the musical properties of different species of wood, we pick up the koa instrument mindful of the fact that its list price is almost £1,000 higher than its walnut equivalent.

A lot of well-intentioned guff has been spoken about the law of diminishing returns but the first few notes on this guitar show exactly where your extra expenditure is going. Yes, there are a couple of extra spec upgrades which may or may not be your thing but there is no arguing with the voice of this instrument.

While the walnut OM-03 is a fine guitar, the Koa OM-40 outperforms it in just about every respect. From the added power to the velvet bass and silken trebles, this guitar impresses in every context we try – not hard flat-picking obviously, we’re not hooligans…

A notable aspect of the playing experience is the sensation that this guitar is breathing with every strum. The attack is smooth and the bloom of the notes as they sustain is balanced and musical. There is a pronounced haptic response, bass notes purr against the chest and we feel the neck vibrating our palm as we play.

These are all signs of a diffusive acoustic instrument, warm and intimate. Once again, this guitar is clearly not intended as an artillery piece. Instead it makes for an excellent choice for singer-songwriters and fingerstyle soloists alike. We even drop into Orkney tuning (CGDGCD) to explore life at 65.41Hz and are duly rewarded as the genteel, breathy voice gains a growl in the bottom end while the trebles retain their silk and clarity.

While the admittedly a little noisy matte finish and wide maple fingerboard binding typical of the Larrivée house style may not match everyone’s taste, there’s no denying that this is a pair of guitars that cover a lot of musical ground – and do so in style.