The ever-evolving APX line now has a handsome and improved entry-level model with a pickup and preamp that promise to be better than ever before. Review by Rick Batey. 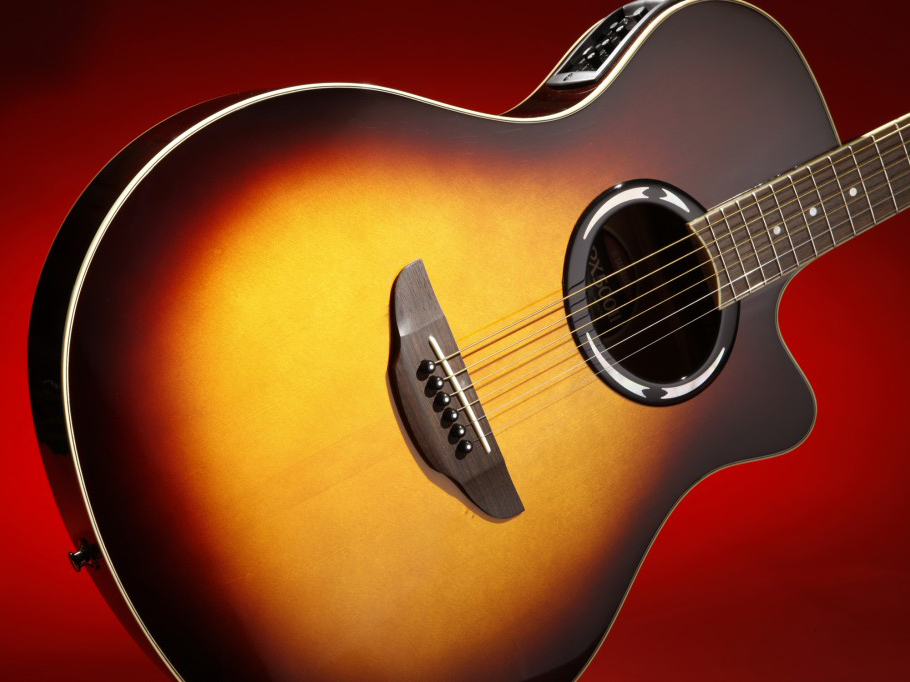 With a quarter of a century of service under its belt, the Yamaha APX must now be one of the most-gigged guitar designs on the planet. The current line-up is based around four main models, the APX1200, the APX 1000, the APX700 and, sitting proudly in the ‘most affordable’ slot, this APX500II (its sister model, the APX500FM, has a flamed maple top). This latest version has undergone a number of tweaks including a new preamp, a new pickup, a trussrod redesign and a slight change in trim.

Affordable it may be, but this all-laminated guitar makes a great first impression. Take that finish on the spruce top, what Yamaha calls ‘old violin sunburst’; it’s beautifully done, and wouldn’t look amiss on a high-end ES-335 (if sunburst isn’t your thing then you’ve got five others to pick from including natural, metallic red, black, vintage white and oriental blue burst). The back and sides – made of a veneer of nato over meranti – have been stained a very dark brown, with hardly any grain visible, and the body finish is gloss all over (the headstock is also gloss, and faced in black, which is a recent change). Cream plastic binding surrounds the top, back, and fingerboard; the headstock is unbound.

The familiar raised plastic soundhole ring is still in place, and it’s decorated by four stylish pearloid inlays that give a very swooshy look. The bridge is rosewood to match the fingerboard, designed with a slightly curving front edge, and it holds a plastic saddle with basic compensation and six black plastic bridgepins with white dots.

The neck is now built so that trussrod adjustment takes place through the soundhole. The neck is nato, dark-stained to match the back and sides, with a slightly rough-feeling ‘natural’ satin finish. For us, the neck profile is one of the best things about the APX500II; slim and rounded, it’s electric-comfortable. Playability is very good, and much helped by the medium 634mm/25″ scale length, and the action at the nut is really good for a guitar in this price range. There’s no need for any work at all, really, and the chunky Grover-alike chrome machineheads do an excellent job. There’s also a second strap button located on the tip of the heel – a position which tends to tip the guitar slightly, and being super-light the APX also dives a little, but a little forearm pressure keeps everything in place.

There are two main criticisms. Firstly, though the string spacing at the nut is 36mm with an overall nut width of 43mm, which is fine, string spacing at the bridge is a mere 50mm. That’s extremely narrow even by Yamaha’s usual close-spaced standards, so this guitar would be a challenging fingerpicker for those with the most spindly of digits (for strumming, on the other hand, it’s fine). Also, although the action is nicely playable, the neck angle is on the low side, so if you wanted to get a near-electric action – something you might well want to do on a guitar of this type – then you would end up with mighty little saddle left, and that might be a concern long-term.

The pickup and preamp has always been a big APX selling point and this model now comes with six piezo elements instead of a continuous strip, while the quick-change spring-loaded battery drawer on the upper treble side now takes not a 9v but two 1.5v AA’s, so you could use rechargeables. The output jack is integral with the endpin. The System 65 preamp comes with a redesigned control panel with a volume rotary and three tiny centre-detented rotaries for Bass, Mid and Treble, plus a slider to control the range of the Mid pot. There’s also an effective push-button tuner, with dimming ‘sharp’ and ‘flat’ arrows leading you to an ‘in tune’ green dot. Oddly, when plugged in, the tuner does not mute the output, which is a little hard to understand.

Sounds
Taking the APX500II’s electro side first, the System 65 delivers really excellent string balance and sweetly-graduated controls. There’s a perfect amount of gain on tap and well-chosen control over the mids, without any horrid-sounding extremes in terms of treble or bass. It doesn’t sound very piezo-y or elasticky at all, just smooth and rich, with pleasingly full trebles. You could take this guitar straight onstage the day you bought it and get a workable sound without any worries at all.

With its 87mm/3.5″ deep body and laminated spruce top the APX500 is never going to win a campfire guitar/banjo throwdown in the pure volume stakes, but we like the way it delivers. It’s very scooped, with a hint of travel-guitar boxiness, and it’s also pretty forward-sounding on the plain strings, but there’s a sweet warmth and elasticity to the overall attack – an almost jazzy tonality – that lends itself well to single-string work as well as comped chords. Strumming sounds predictably bright, but controlled.

Verdict
The APX500II is such a well-balanced package. It’s a bit like turning up at a car hire place and being given the keys to a Ford Focus; it’ll handle well, go well, nothing will annoy you, and you’ll have a fine holiday. The Yamaha’s neck is a real sweetie and the body and ergonomics are comfy, the pickup sounds very good and is exceptionally even in response, while the controls are well-attenuated for the real world. As ever with the APX line this guitar hangs its hat slightly on the ‘electric’ end of the acoustic-electric spectrum, but the unplugged sound – though scooped and none too loud – is pretty pleasing. Just make sure you can cope with the close string spacing at the bridge, and then go ahead and buy with confidence. 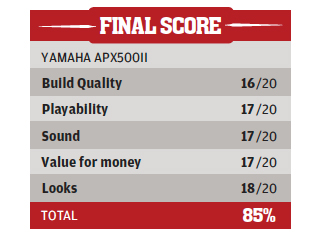