When it comes to outrageous style and solid sound, BC Rich has always pushed the boat out. Marcus Leadley finds out if this tradition lives on… 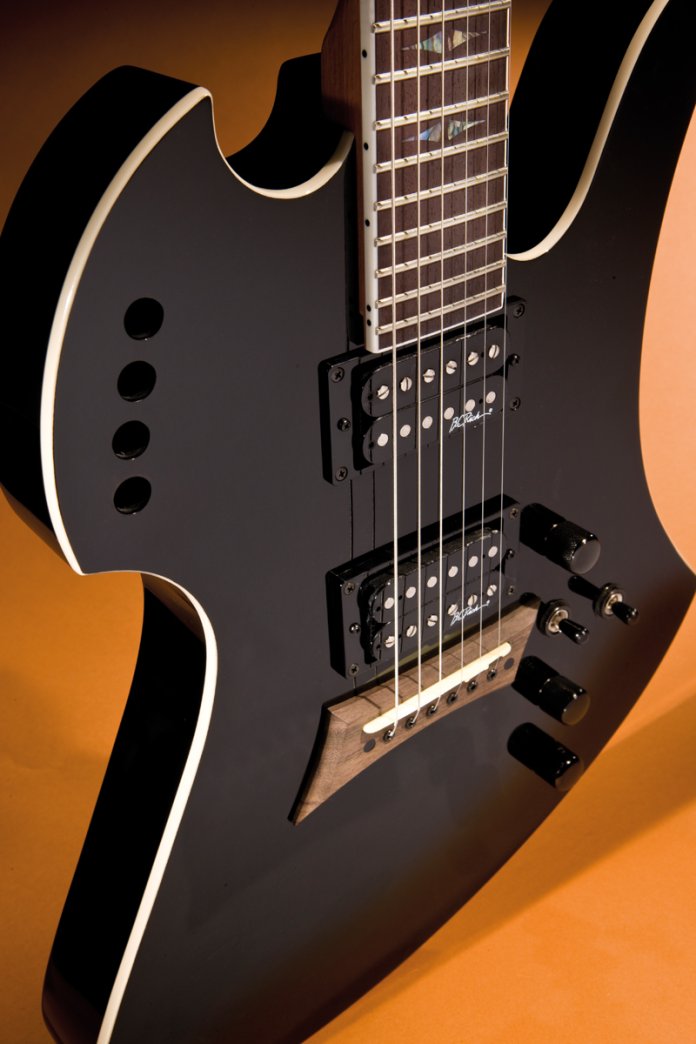 Having built up a reputation as a maker of fine acoustic guitars through the 1950s and ’60s, Bernie Rico executed an extraordinary back-flip into the burgeoning Los Angeles metal scene in the 1970s. Early handcrafted electric designs such as the Seagull and Eagle met with popular approval but when the Mockingbird came along in 1975, things really took off. Early Mockingbirds pioneered neck-through design and came armed with Dimarzio pickups, with the traditional controls augmented with a varitone control, built-in preamps and coil taps. This really was a new era of guitar sounds, and players such as Lita Ford, Joe Perry, Kerry King and subsequently Slash were all drawn in. Today’s Mockingbird range is extensive and features guitars for every budget. 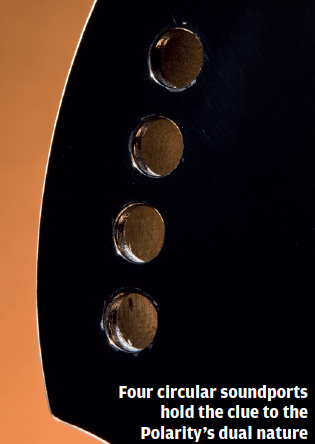 The new Polarity Standard (along with its sibling the Polarity Deluxe, which features a set neck and Seymour Duncan pickups) is a quintessential contemporary hybrid electric, designed to deliver both electro-acoustic sounds as well as electric tones. To achieve this the bridge is loaded with an undersaddle piezo transducer which is routed through an active 9V SOHO preamp.

The instrument features a pair of BDSM humbuckers, and there’s a coil tap push/pull on the Volume control so you can get single-coil sounds as well. There’s a standard three-way pickup plus a second that lets you access just the electro-acoustic tones, a blend of piezo and magnetic pickups, or magnetic pickups alone. Finally, there’s an independent Volume control for piezo and a master Tone for the other pickups. This sounds complicated, but once you get a handle on the switching options (which takes about 10 minutes) the range of tones you can create is quite remarkable and the interface becomes remarkably intuitive. 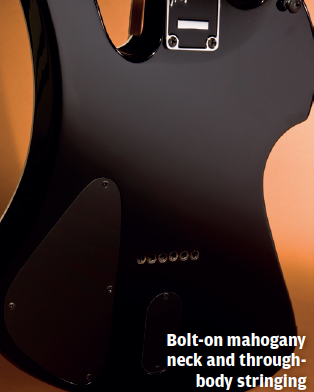 In terms of construction the Polarity mixes up features from many different styles of guitar making, but the overall package comes together really well. The body is chambered mahogany with a mahogany top (the Deluxe comes with figured maple).

The body is thicker than most contemporary electrics, so it feels more like a semi-acoustic when you put in on a strap, and the absence of a ribcage chamfer accentuates this comparison – as do the four small soundholes on the upper bout that reveal the internal void beneath. The mahogany neck is scarf-jointed under the third fret, and satin-finished, which gives it a similar feel to the rosewood fingerboard.

It’s a full two-octave neck, but the thickness of the body and the structure of the neck joint makes getting beyond the 22nd fret a challenge. The bolt-on construction is a surprise, which, in a way, suggests the Polarity might be thought of as distant relative of the Fender Starcaster. The choice of an acoustic-style non-adjustable rosewood bridge really sets the ground rules for considering this guitar; nailing the electro-acoustic sound and performance is the starting point. Visually the bridge sits surprising well on what is essentially a hard rock electric guitar body shape. 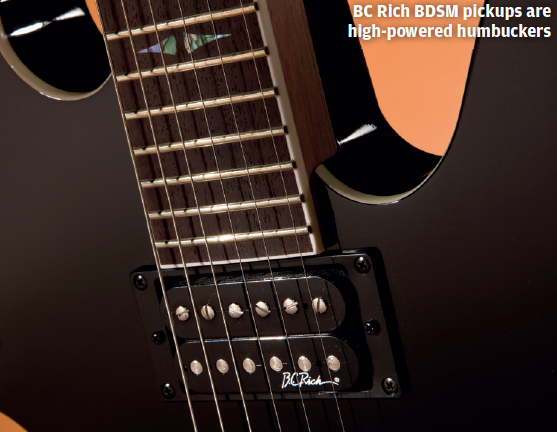 Sounds
Viewed from the perspective of having the guitar on your knee, putting the lower of the two three-way selectors in the ‘down’ position gives you the piezo output on its own. Its volume is controlled by the knob furthest to your right. The basic sound is beautifully rich, with sparkling top end and solid, gut-grabbing lows. There’s no tone control, so what you hear is what you get (without resorting to external processing), and overall the balance of the performance is really appealing. Anything you’d play on an acoustic sounds great, so picked chords and melodies work really well. The open richness of the sound is ideal for strummed vocal accompaniment.

Moving the selector to the ‘up’ position gives you just the humbucker output. The piezo output is actually louder than the humbuckers – and a quick check confirms that the humbuckers are, in turn, louder than the single coils. This isn’t surprising as there’s an active preamp in the piezo circuit. However, to use the Polarity to best advantage in a live setting, you may need either a twin-channel amp or a boost pedal somewhere in the loop – or possibly a twin boost if you want to switch seamlessly between single coil and acoustic tones.

The humbuckers are very well-voiced. There’s no hint of boxiness in the midrange, so even the bridge position can be used for clean chords. Adding some mid-level drive creates a very bluesy and articulate tone. The sustain is good without being overly extended, but the acoustic bridge design gets the most out of the instrument’s natural materials so the sound is pleasingly full – again, rather like a good semi-acoustic.

Pushing up the gain brings on some very classic blues and rock tones. The neck humbucker in particular sounds great for boogie rhythms and glam-style stomping. All in all, the lead performance errs generally on the ‘classic’ side, and the absence of a tremolo bridge sets the agenda. In terms of tone, it’s not unlike a Gibson SG – even the feel, as a result of the 24.75″ scale length, is pretty close. The coil tap sounds deliver a sharper edge with the sort of microphonic clarity you’d expect. Basic Strat-style tones can be found here, but not the out-of-phase voices. 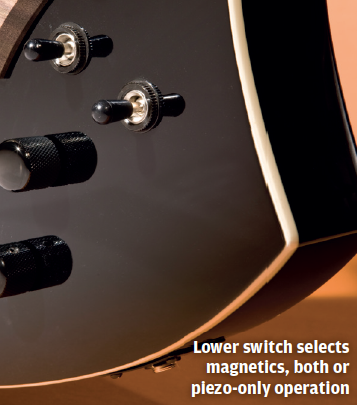 Moving the lower selector to the ‘middle’ position allows you to blend humbucker or single coil tones with the piezo, and the result is very rewarding. As both piezo and magnetic pickups have master volume controls, you can create very subtle blends to nuance your tone. As the piezo output is hotter than the humbuckers you can also use its volume control as a form of variable boost when you’re in blended mode.

This is very subtle, and the ‘playability’ of the control means you can create both volume ramps and tremolo-style effects. Generally speaking, introducing the piezo tone to the humbucker sound adds clarity to individual notes and a whole extra dimension of sub-bass content. Adding it to the single coil sound warms things up a bit and fills out the frequency spectrum, smoothing the midrange and clarifying the bass.

Verdict
The Polarity Standard is a very versatile instrument. Electric guitars usually excel at either clean tones or driven sounds, but this one delivers right across the board. As a contemporary hybrid electric it’s an ideal rocker’s choice for the times when you want to bring the energy level down and introduce some light and shade; while the tone is there, it’s hard to imagine a folk or pop musician opting for a look with such strong metal associations. There’s a lot to be said for using your ears rather than your eyes when it comes to instruments and the BC Rich Polarity is a good example of a guitar where its looks will work both for, and against, player preference. 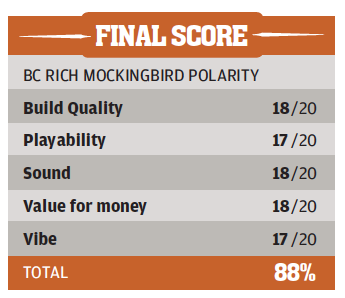