B&G Guitars prepares to step into the big time with the alluringly affordable Little Sister Crossroads. We discover that it’s no hard bargain… 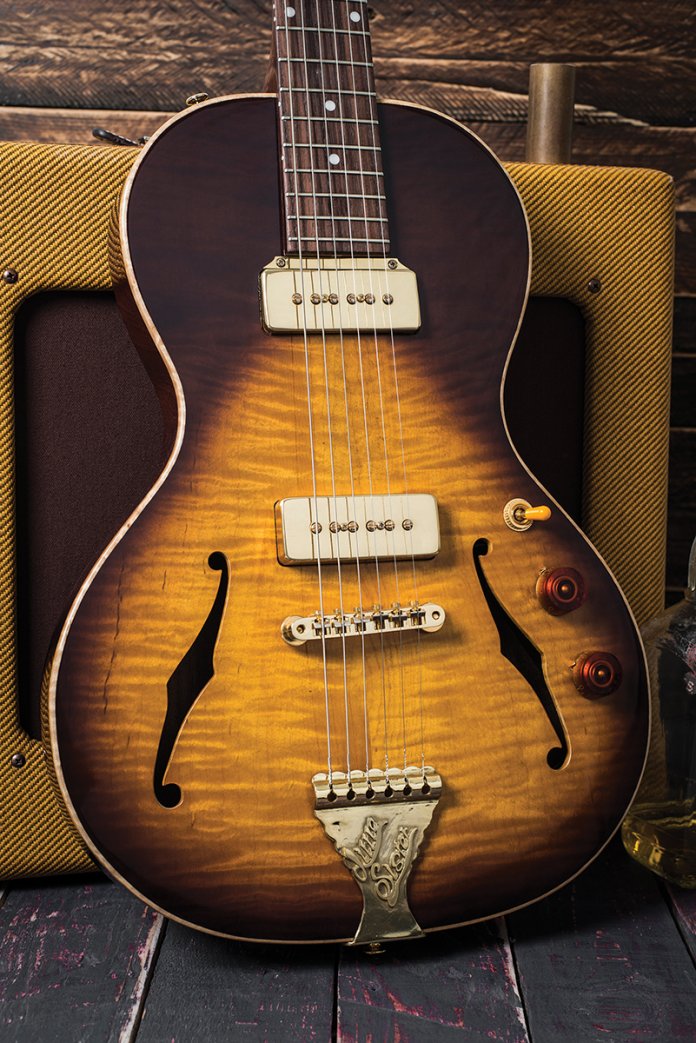 Crossroads loom large in blues iconography – being emblematic of change and tough choices. You can continue on the same path, head in new directions or go back the way you came, but standing still is not an option. And so it was for B&G.

According to CEO Avi Goldfinger, it was never B&G’s intention to be exclusively a boutique guitar maker. B&Gs have always been made in Tel Aviv, but even working flat out, the company only completes around 30 instruments monthly and demand outstrips supply.

So B&G decided to outsource production to increase capacity and offer the standard model at a lower price point. Various options were considered, including opening a factory in Israel, but having crunched the numbers Goldfinger recognised that hitting that price point would compromise quality.

Instead, he turned to Asia, and began researching factories and checking samples. The stumbling blocks were specifying the correct woods and achieving a thin finish, but the best match was eventually found with a factory in China.

Once prototypes were completed, B&G’s co-founders and head luthiers Eliran Barashi and Yotam Goldstein went to China to provide feedback and technical training for the factory employees. Now everything is up and running and the Little Sister Crossroads retails for just under 40 per cent of the cost for Private Build equivalents. The Tel Aviv operation will now concentrate just on custom orders with a wide variety of options.

So, what’s different? Well, not a lot, as it turns out, because B&G envisaged the Crossroads and Private Build models akin to Fender’s American Standard and Custom Shop models. Consequently the quality remains high. 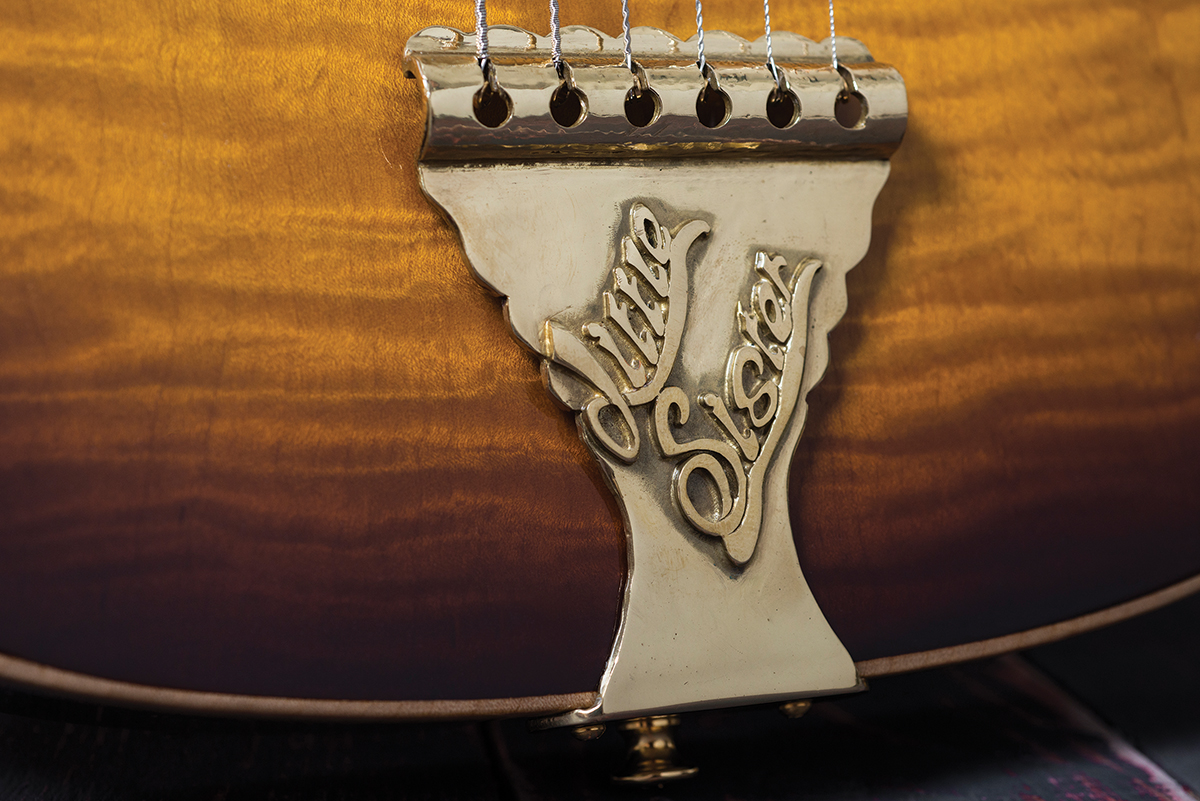 The body is made of three pieces of African mahogany, rather than a single piece, and the fingerboard dots are plastic rather than pearl, but the latter has more to do with recent export restrictions than cost cutting.

Rather than nitro lacquer, there’s an ultra thin UV-cured poly finish that looks and feels almost identical and the pickups, electronics and hardware all come from China and Korea. Modern glues are used rather than the vintage-spec animal protein and urea formaldehyde ones reserved for the Private Builds.

But there’s a twist – should you want to narrow the gap between a production model and the Israel-built line while spreading the cost out a bit, B&G offers its Private Build-spec pre-wired harness, solid brass bridge and pickups as aftermarket items.

This model is so new we’ve been sent a prototype, so we have to take it on trust that the production models are built to the same standard. We’re told this review model’s neck profile is a little fatter and less V shaped than the production guitar, and once production is fully underway, the fingerboards will be ovangkol rather than East Indian rosewood.

Little Sister Crossroads in use

Like the Tel Aviv-made model we tested last year, the Crossroads feels like the easiest playing and best sustaining parlour imaginable, however the deeper non-cutaway body here intensifies the effect (it’s also available as a cutaway should you want one). The unplugged tone is reminiscent of a really good ES-335, but with more jangly sparkle and bass definition at the expense of some low midrange woodiness. 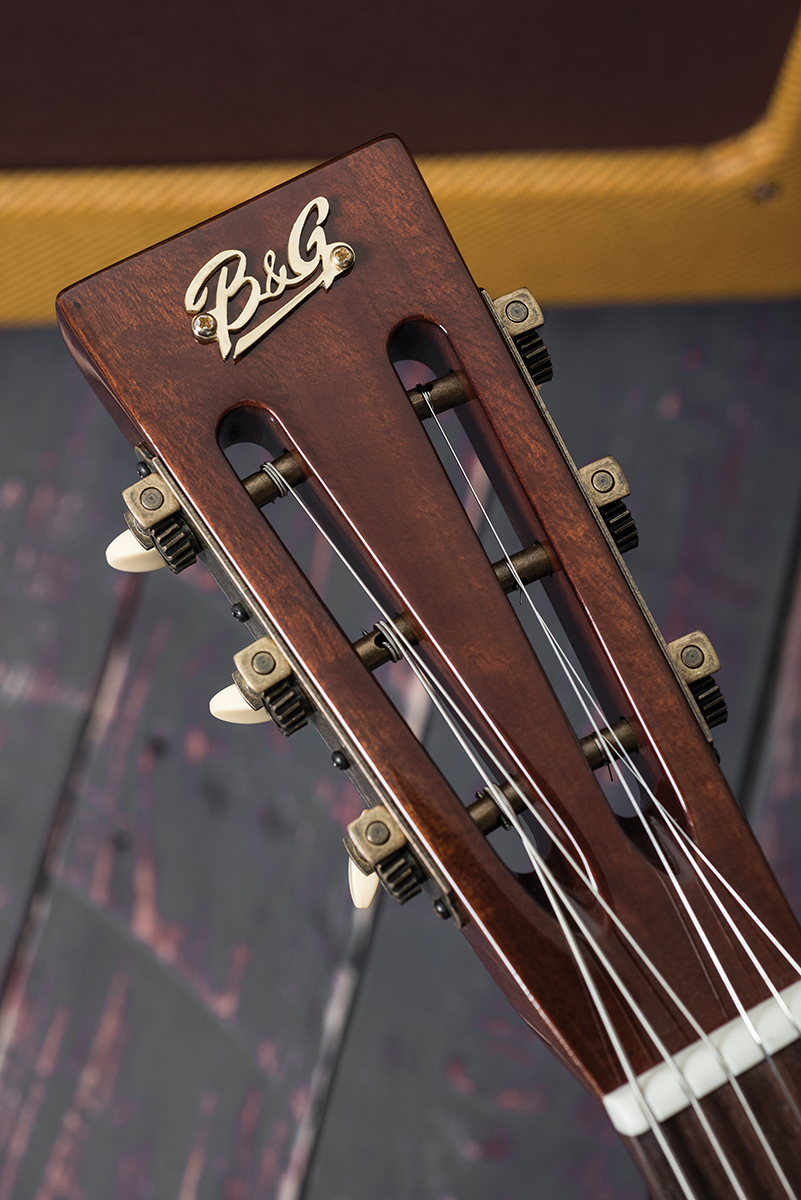 The pickups certainly do the Crossroads justice by taking those acoustic qualities and running them into raunchy and powerful overdrive with ample harmonic bloom, impressive definition and plenty of tonal contrast between the three positions. They’re quite microphonic, however, despite being wax potted.

While the bridge quacks and growls, the neck is fuller, rounder and woodier. The semi-solid tonal characteristics are also more apparent in the neck and middle settings and although it sustains like a solidbody, the fullness of the tone is somehow more ES-175 than ES-330.

The pickups are set quite low out of the box, and raising them improves clarity, touch sensitivity and sustain – just like vintage P-90s. Even so we can’t quite hear the harmonic sheen of the real deal and with the stock wiring, things darken slightly as you back off the volume.

Maybe the wiring upgrade would remedy that, but instead we opt to move the tone potentiometer feed wire from the input to the output of the volume potentiometer, 1950s style. Problem solved! 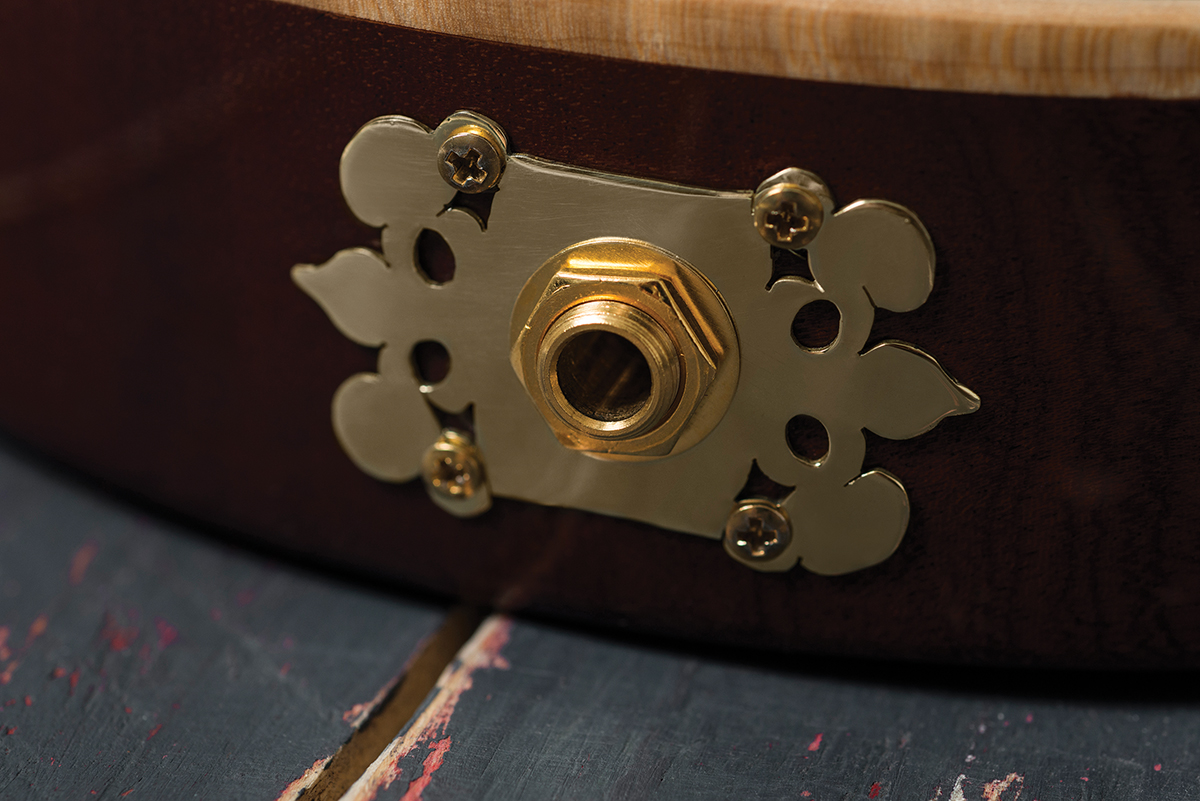 The brass bridge weighs 15g more than the standard gold-plated one, and the difference in tone is noticeable both acoustically and electrically. With the brass there’s a marked increase in sparkling frequencies, note separation, twang and sustain.

We also hear more of the acoustic character coming through and the Crossroads’ touch dynamics improve. The wiring loom upgrade isn’t quite as much of a no brainer, however. You could buy the individual components for a lot less money, but obviously you’d have to put it together yourself – whether that’s worth it depends on whether your time or your money is worth more!

The pickup-swapping outcome isn’t as clear-cut as you might expect either. The Private Build pickups are refined and certainly mellower, with a more pronounced upper harmonic bloom and vocal articulation.

They’re not as clear, however, and there’s less contrast between the neck and bridge. The middle setting has plenty of character, but lacks that harmonically loaded vintage ‘brrrang’ from the bridge and horn-like bark from the neck. Their softer tone is superb for warmer clean and semi-driven picking, but less exciting for rockier styles. We like both sets for different reasons – which you prefer is down to personal taste. 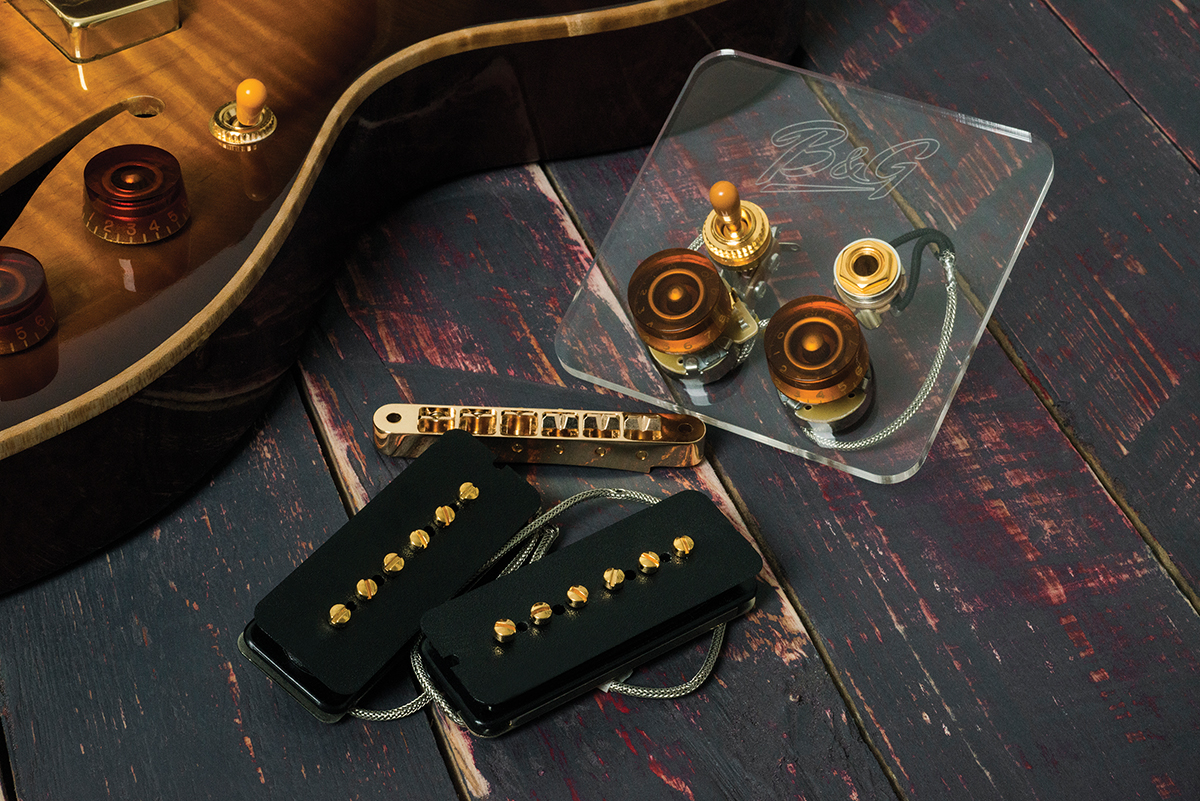 We loved the original Little Sister so much, we were both excited and a little apprehensive about B&G’s move to mass production. We needn’t have worried – picking up a Crossroads for the first time feels like catching up with an old friend, and it’s actually hard to find the catch as to why this guitar is less than half the price of its sibling.

B&G went down to the crossroads, and has come back with its soul fully intact. 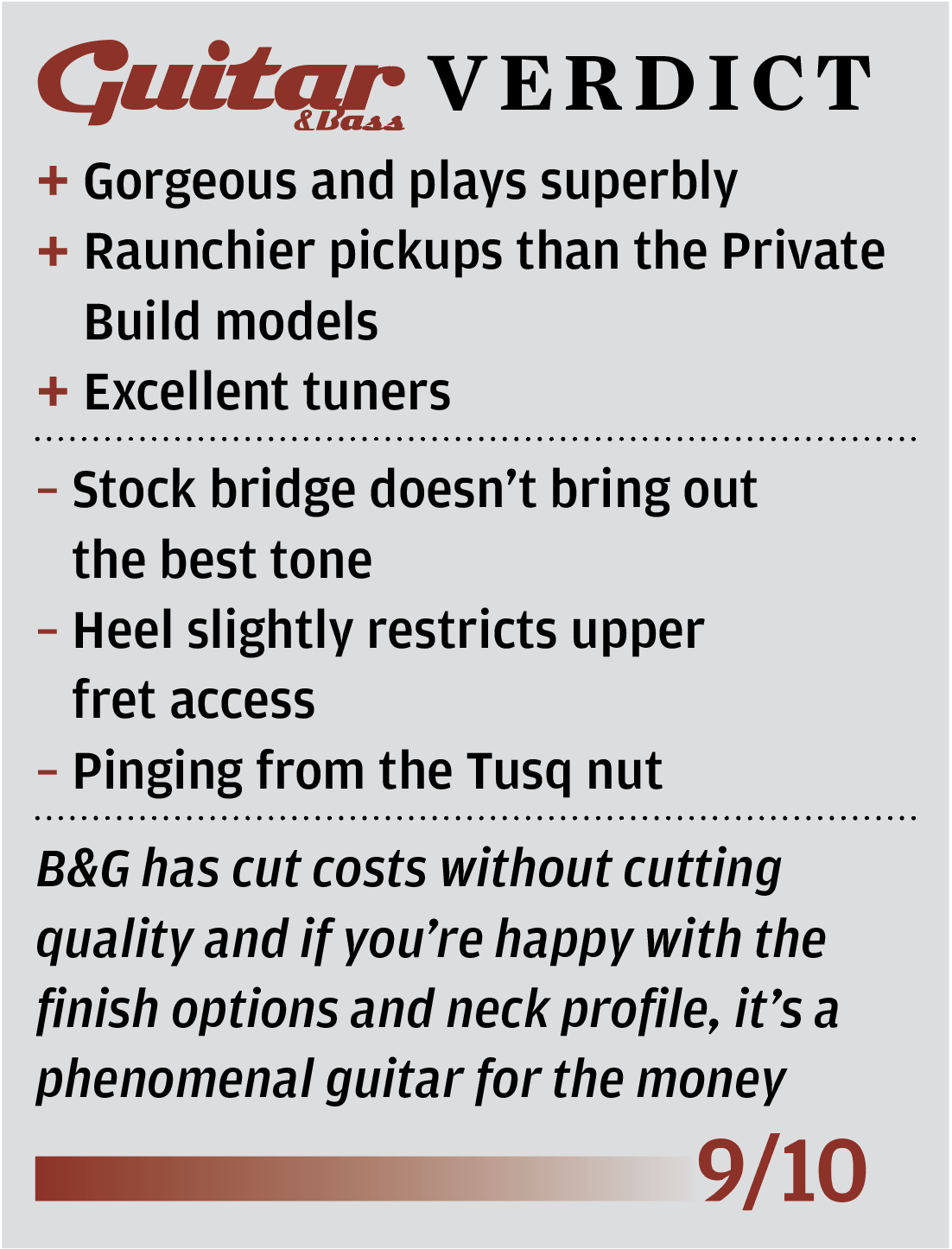