Many players will remember their vintage Höfner Verithins fondly, but the new Verythin models offer classic looks together with concessions to modern player needs. 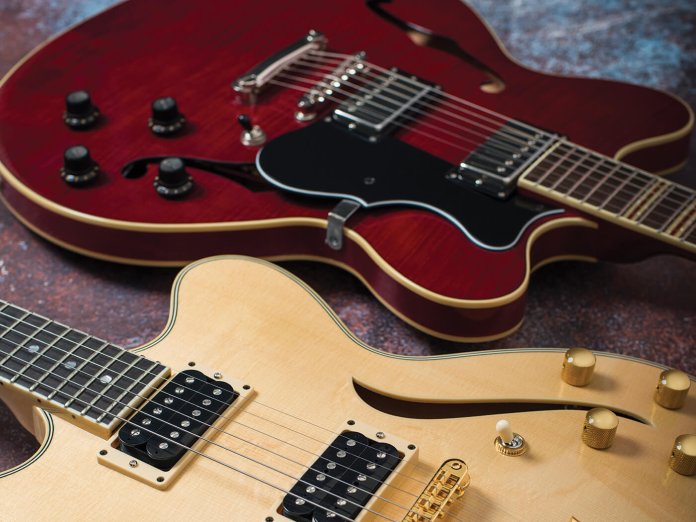 Höfner was a long-established maker of fancy jazz-box guitars before rock ’n’ roll even came along. Inevitably, however, the German company soon had to respond to the increasing popularity of American-made electric guitars young musicians were so enamoured with, and the Verithin was introduced in 1960 to emulate the ES-335.

The key difference, however was in the name – because at 1.25 inches deep, the Verithin was very thin indeed. The name may have been slightly altered, but the Verythin guitars reviewed here have the same body dimensions as the originals, along with a host of new features. 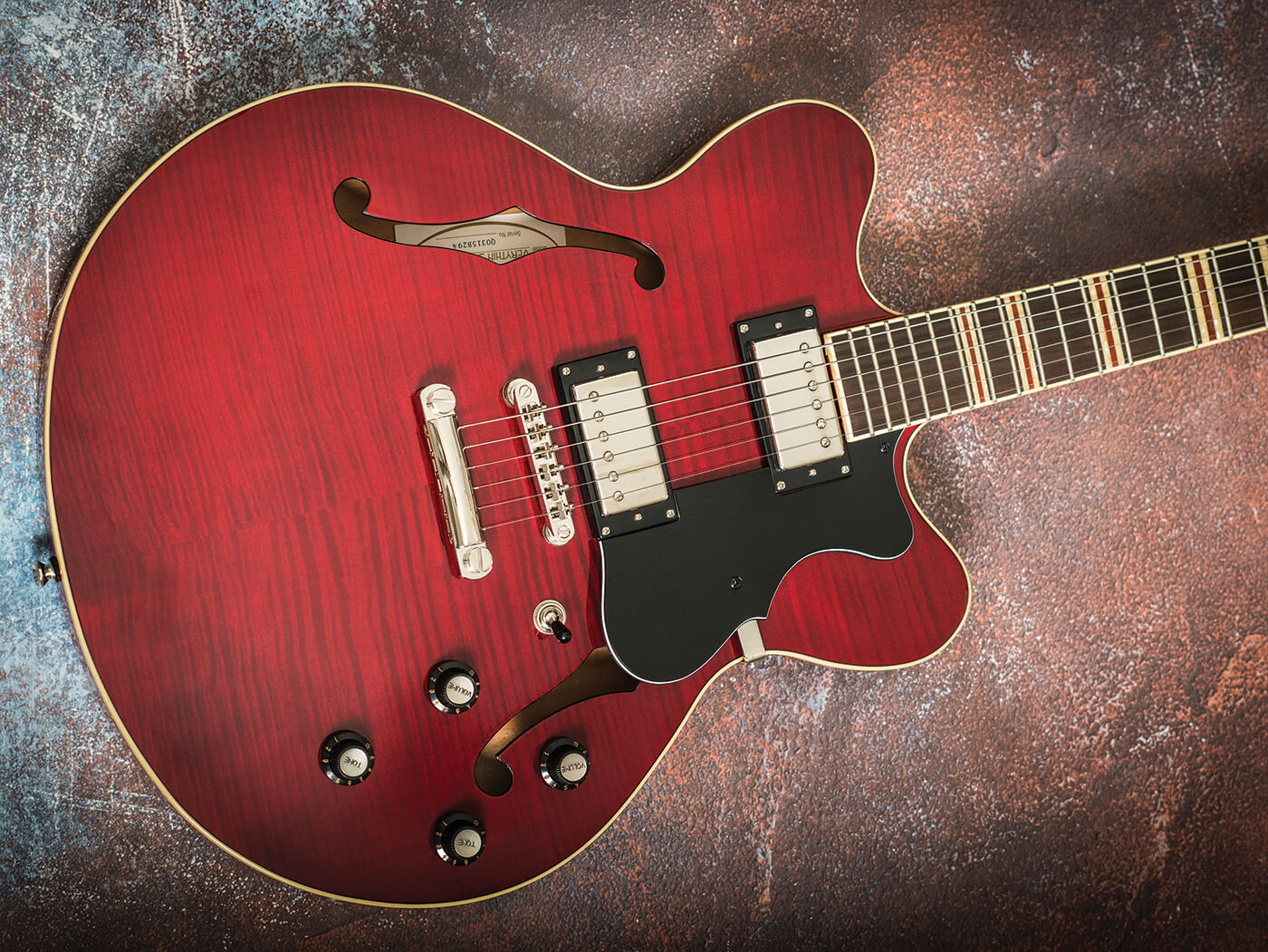 Now manufactured in China rather than Germany and coming from Höfner’s Contemporary Series, the CT looks and feels not unlike a vintage Verithin. The headstock shape, striped fingerboard inlays, and rectangular pearl tuner buttons all look the part. We’re less enamoured with the headstock inlays, but the knobs and pickguard shape add to this affordable thinline semi’s vintage aesthetic.

While by no means a deal-breaker, the thick poly gloss finish (with noticeable build-up around the neck join) and the slightly scruffy dress of the tall jumbo frets betray its mass-produced, budget origins. At this price, however, some build and finish inconsistencies are to be expected.

Fiddleback maple grain pattern can be seen all over the body through the transparent cherry finish and inside, there’s a centre-block to enhance sustain while reducing feedback. Stop tailpieces weren’t a period feature, but many players will prefer this one to the earlier trapeze-style tailpiece.

Little information is provided about the pickups, besides the fact that they’re ‘full sized’ Höfner humbuckers. They combine with the tune-o-matic bridge, three-way switch and conventional control layout to make the CT an attractive hybrid of Höfner style and ES-335 practicality. 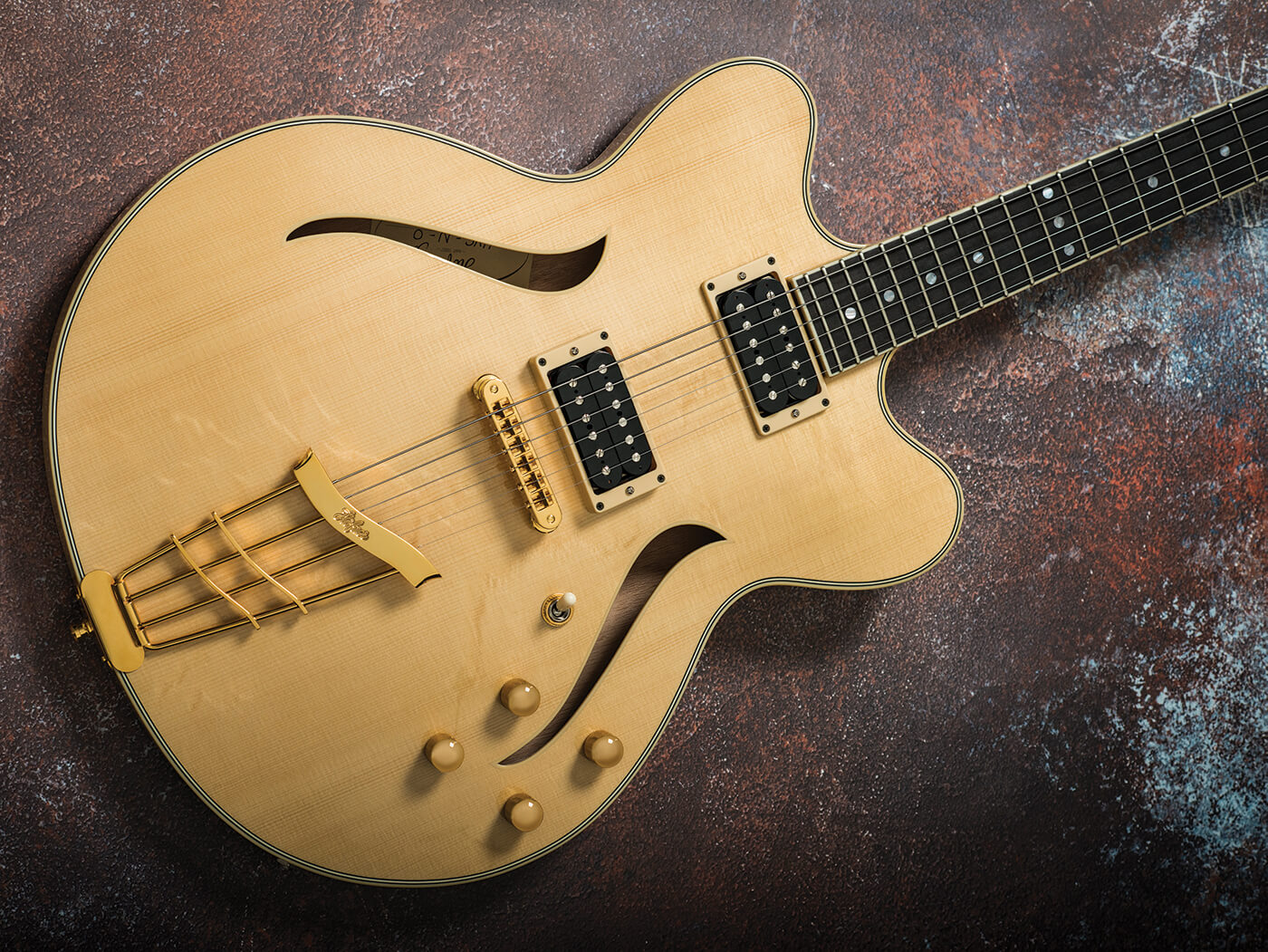 Höfner enthusiasts may conclude that ‘Classic’ is a misnomer, because this guitar has relatively little in common with the Verithin models of the 1960s. Besides the body outline, laminated spruce top and the ‘lyre’ tailpiece, this is a substantially different instrument.

The soundhole and headstock shapes are changed on this German-made guitar, but more significantly, there’s a very wide solid-spruce centre block running through the body. Since the Verithin was an attempt to emulate the ES-335, it’s probably something Höfner should have done in the first place, but better late than never…

All the hardware is updated, too, with modern mass-produced gold-plated items. The tune-o-matic bridge is fair enough, since it’s not too dissimilar to Höfner’s 60s design, but the knobs and Schaller tuners are rather blandly functional and detract from this model’s character.

Gone, too, are the single-coil pickups with the diamond Höfner logo stamped in the cover. Instead, we have an uncovered set of Bavarian-made NOwaxx humbuckers, with conventional surrounds. The most striking difference between these guitars, however, is the neck set. The Classic’s has a steeper angle, which results in the bridge being adjusted unusually high. We measure about 12.5mm from the body to the base of the bridge, which is double that of the standard CT.

The wood does look very attractive under a thin and well applied gloss finish. In true Höfner style, the best is saved for the back and sides, where the outer layer of the laminate is flamey fiddleback maple. Overall, the finish quality impresses – with the exception of the fret dressing.

The fret ends are extremely rounded, which is fine. But in the process, the file has scuffed up the finish and the binding, leaving it feeling almost as rough as it looks.

There’s little to choose between these two in weight or feel, but the Classic has a slightly fuller and more comfortable neck. Acoustically, the sonic contrast is greater, with the CT having the darker and more subdued tone of a typical semi-solid, while the Classic is louder, brighter and more dynamic. Impressive sustain is a shared characteristic. 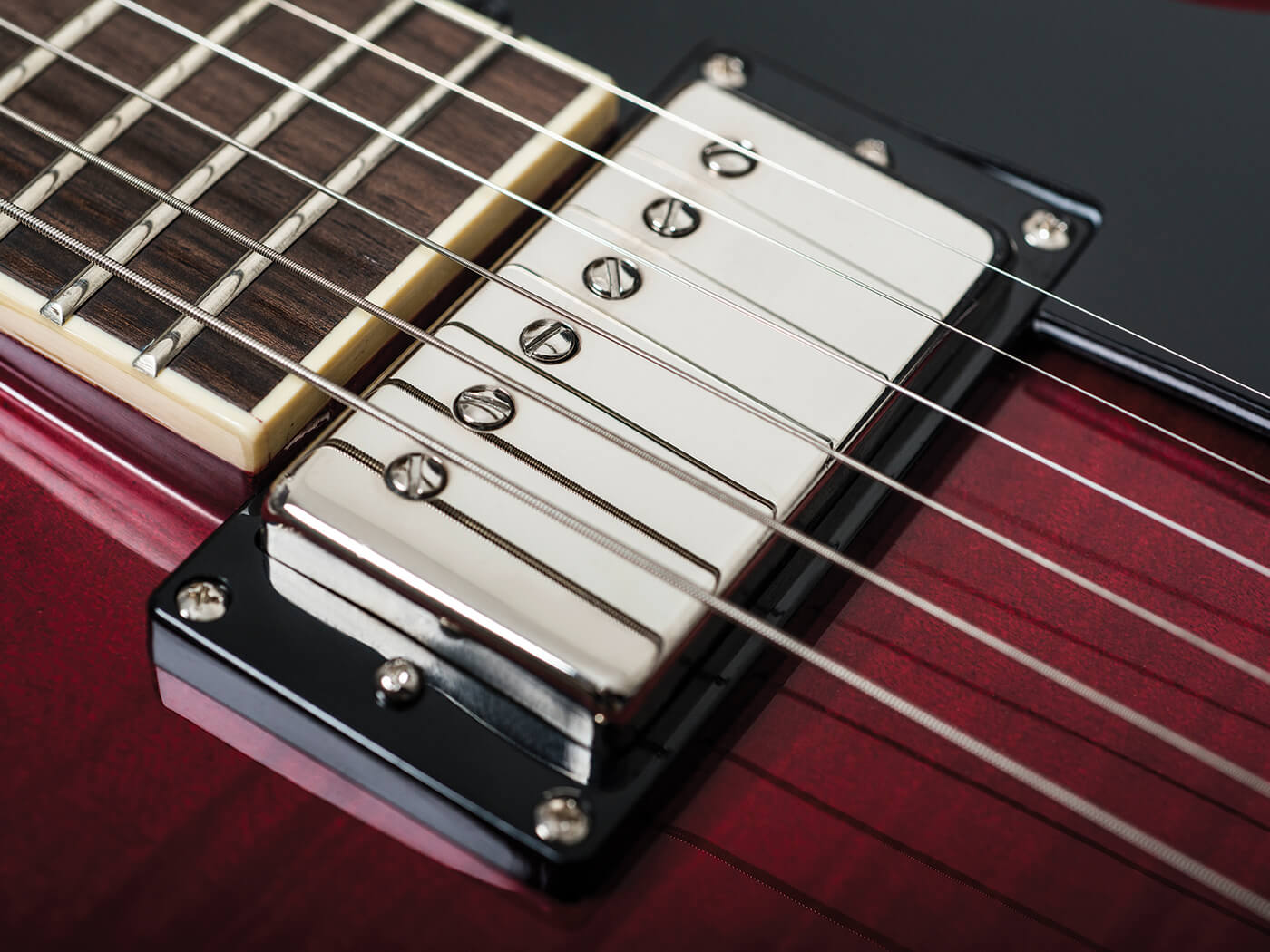 The CT’s pickups provide some pleasant surprises. They have something of a classic voicing, in a ‘Pat. No’ sort of way, with good articulation, strong mids and moderate power. Played clean, you get a nasal quack off the bridge and a more rounded and vocal tone from the neck. This eases into a thick, clear and slightly aggressive voicing as the amp is turned up. In other words, it’s a very creditable ES-335-type guitar.

The Classic’s humbuckers produce bright and clear tones with impressive definition. Compared to the CT’s pickups, there’s a touch more sweetness and refinement, but the NOwaxx units don’t have quite as much character. They greatly impress for clean and semi-driven jangly tones and chord inversions cut through with authority when overdrive and distortion are involved. The fast attack-and-release characteristic makes the Classic less smooth than the CT, but it’s even better for rhythm and picked-chord work as a result.

Most heritage guitar manufacturers have to balance the fondness some players feel for vintage instruments with the need to remain relevant and expand into new markets. With respect to Höfner fans, despite its considerable charm, the original Verithin was very much an instrument of its era. During the 1960s, most serious players upgraded to American models as soon as they could afford to – for a reason. 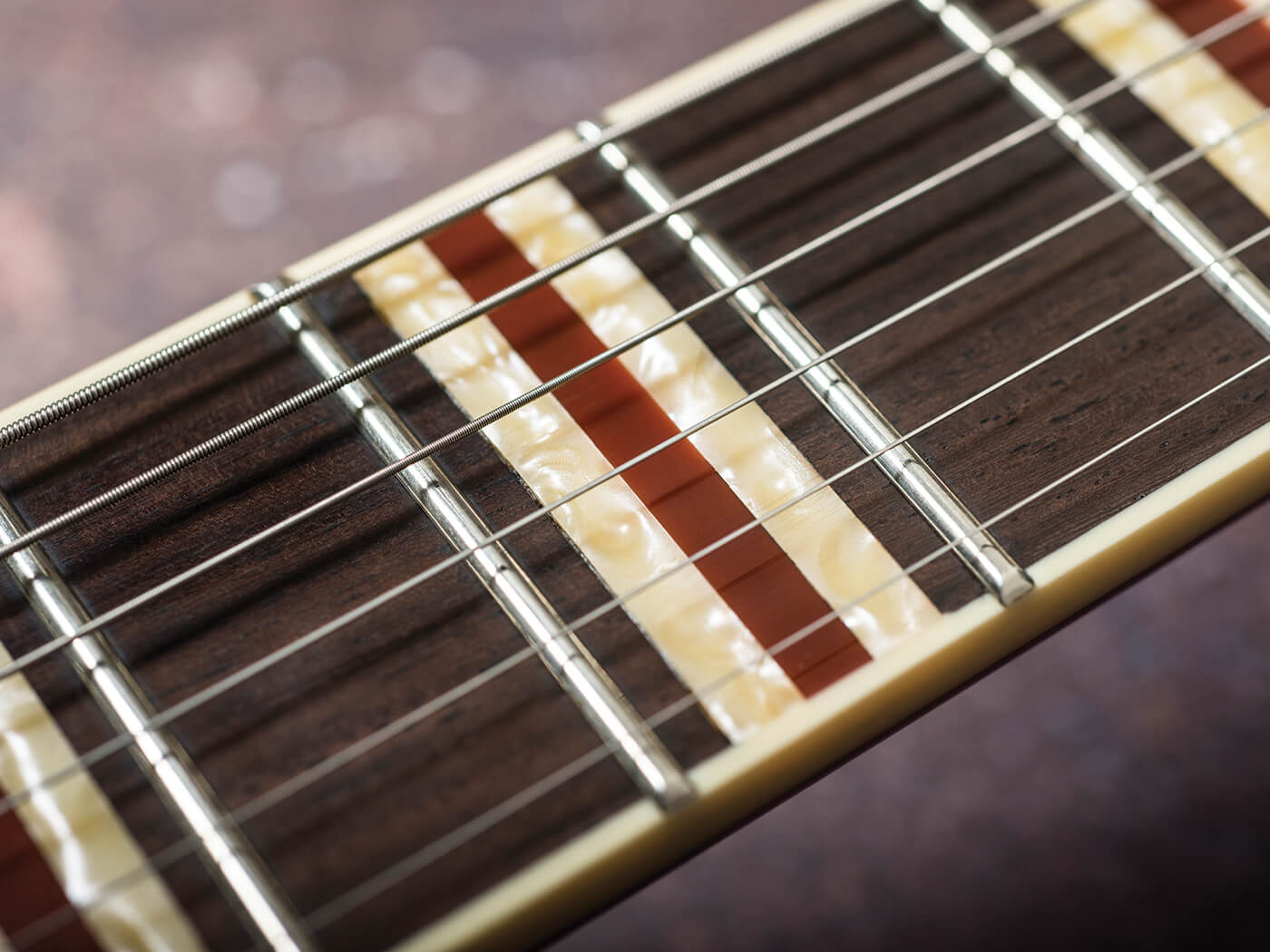 In order to make the Verythin Classic suitable for contemporary players, Höfner has made some bold and sensible changes. It’s an attractive and well-made instrument – besides the fret-dress issues – but it’s also a bit charmless and uninspiring. Having solved the playability and feedback issues, and cleaned up the basic styling, it seems like a last-minute decision was made to throw on a bunch of industry-standard parts in a misjudged attempt to modernise.

The end result is a guitar that is neither classic nor contemporary – especially when you consider the boldness, care and understanding of company tradition that goes into designing similarly priced modern Gretsch and Gibson models.

The Verythin Classic lacks the ‘X-factor’ that would inspire us to buy one at this price, but it plays well and has slightly better tone than the significantly cheaper CT. On the other hand, hardware and pickups can easily be upgraded, and if combining vintage Höfner vibe with classic ES-335 tone and playing feel appeals to you, then the CT is a very attractive and affordable semi-hollow electric alternative.