Precision engineering and modern design combine to make a boundary-pushing guitar from the foothills of the Swiss Alps. 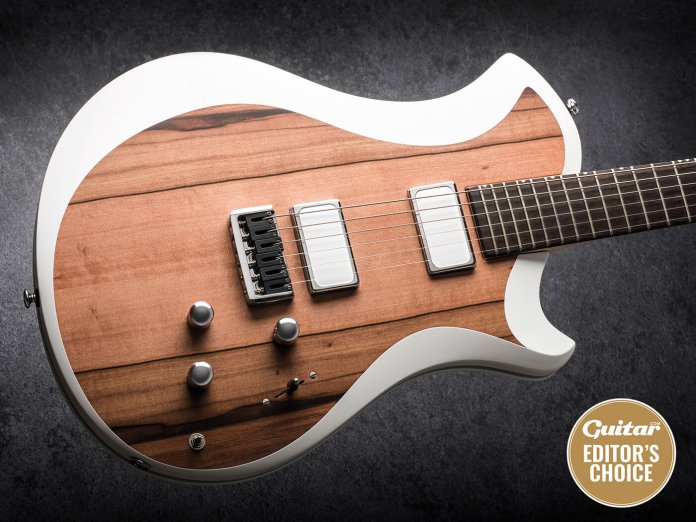 In a little over five years, Switzerland’s Relish Guitars has introduced and refined a line of hand-made instruments that challenge traditions and preconceptions about the electric guitar from the ground up. Making around 250 instruments per year, Relish has two core models in its line and this is the Mary One, a 24-fret single-cut which offers an eyebrow-raising level of versatility in addition to its bold looks.

At the heart of the Mary One is a lightweight machined aluminium frame, to which the maple neck – featuring stainless-steel frets set into a strand-woven bamboo fretboard – is securely bolted. The neck itself is one piece, with the back angle on the headstock created using a specialised Scandinavian wood-bending technique rather than a potentially weak angled joint. Relish Guitars believes its approach makes the headstock almost completely unsnappable, which is reassuring.

The Mary One’s aluminium frame is covered fore and aft by the two halves of the guitar’s body with what Relish calls a ‘floating sandwich construction’. The top and back are separated from the aluminium core by rubber layer connectors which, according to Relish, “allow the aluminum centre to vibrate freely and produce an increased resonance, similar to a soundboard inside of a piano.”

The magnetically attached back is made from high-density, high-pressure wood laminate and the bevelled front is a medium-density slice of the same, in this case adorned with a veneer of beautifully figured Chilean Tineo wood, although other equally spectacular and environmentally friendly options are available. The headstock is given the same elegant veneer treatment, although its abrupt lines may divide opinion.

These initial specifications already hint at an instrument that differs from the norm, but there’s more to be discovered. Opening the stylish hard case for the first time, we find that the guitar arrives with a pair of hand-wound P-90s installed. However, the Mary One also comes with a pair of humbuckers in the case, in addition to an onboard active Graph Tech Ghost piezo bridge, which lets you blend more ‘acoustic’ textures into your playing.

Each of the conventional electric pickups is mounted on a magnetic chassis with a four-pin connection. This allows you to pop the back off the instrument and swap pickups in less time than it takes an open E chord to die off. You can also raise and lower the height of each pickup. This is impressive, but you’ll also have to remove the back to change the piezo battery or indeed, the strings.

Despite a potentially intimidating palette of sounds on offer, the control system is intuitive enough with single master tone and volume knobs for the magnetic pickups and a push/pull volume knob for the piezo with a mid-boost. There’s a three-position selector switch for the magnetic pickups and a mini-toggle switch which moves you smoothly through magnetic only, magnetic/piezo blend and piezo-only options.

On a strap, the Mary One is a well-balanced guitar with a sleek, ergonomic feel – this is perhaps surprising from an instrument that owes more to Ulrich Teuffel and Ken Parker than it does to Leo Fender or Ted McCarty. The semi-matt-finished neck has a gentle C carve and the 10-inch radius board feels open and fast under the fingertips.

With its 24-fret neck and 650mm (25.59-inch) scale length we can expect a lively, vibrant response and the first strummed chords through a clean amp don’t disappoint. The P-90s cover a lot of tonal ground and stay articulate and musical across all positions. This is very much a modern sound, with power at the front of the note blooming elegantly into smooth sustain.

Blending in a little piezo adds shimmer, which moves us into boosted lipstick territory. As we kick in some dirt from a Beetronics Royal Jelly, the Mary One reveals a snarling SG-meets-Tele character, which encourages a nuanced and dynamic approach from the picking hand. It’s a lot of fun.

It takes only a few seconds to pop the hood and load the Mary One with a pair of humbuckers, which ramp up the power and take us immediately into classic rock and hard blues. Interestingly, the neck pickup’s response is very Burst-like – there’s a surprising level of clarity on offer and an immediate, bell-like response with extended chord voicings ringing through beautifully.

The bridge humbucker is throaty, rich, and powerful – more reminiscent of a hollowbody PRS than anything from Kalamazoo. If shred is your thing, there’s ample amounts of poke and aggression available with plenty of scope for sustained, expressive bends along the neck – although access to the very top frets is a little hampered by the relatively shallow cutaway.

The piezo pickup, although it won’t fool anyone on its own, sounds surprisingly natural and acoustic in a band mix. It also features an active boost and with a Y-cable you can split the stereo signal, allowing for some expressive blended textures such as clean piezo and stereo delay via an acoustic amp or the PA, with the magnetic pickups routed into a traditional tube amp. That’s just a serving suggestion, of course – the opportunities are only limited by one’s imagination.

The Mary One offers an exhilarating playing experience across the board with rock-solid tuning thanks in no small part to the Graph Tech nut and Gotoh tuners. Its relatively light weight also makes it a pleasure to play standing for more than an hour.

There was a time when a review of any instrument designed later than 1960 would inevitably begin with a sweeping caveat about the fear and mistrust that the shock of the new can instil in the guitar buying public. While it remains true that classic 20th-century designs will always have a place in the hearts of many, there are modernistic new instruments out there that really should not be ignored.

Drawing a parallel with the timepieces for which the Swiss are perhaps better known, if the Fender Stratocaster is a vintage Patek Philippe Calatrava, then the Relish Mary One is a Hublot Tourbillon. Bold, challenging, in your face, and very good at its job.