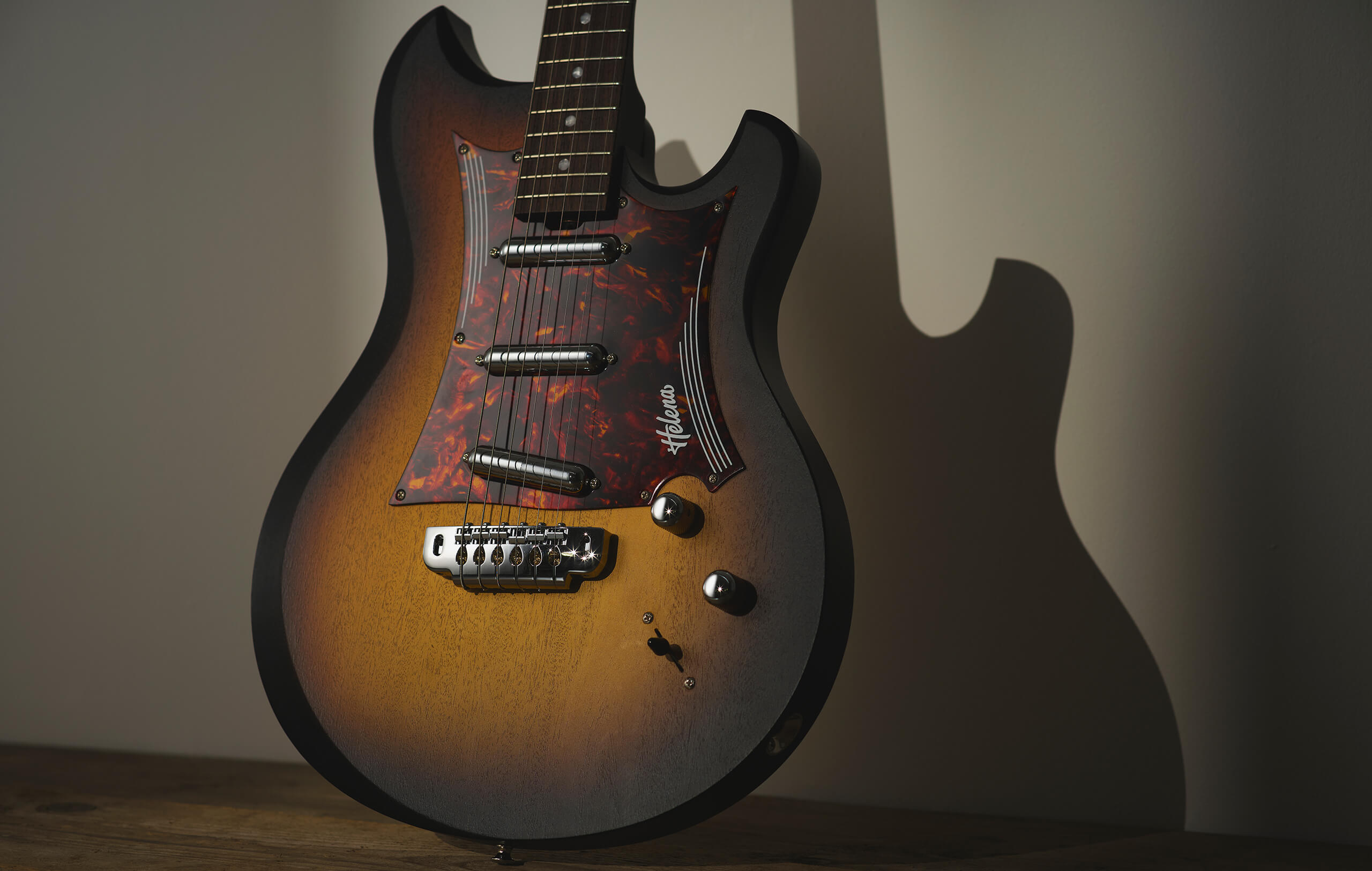 It’s a brand we associate with small but perfectly formed semi-acoustics, yet B&G’s latest is a solidbody with some interesting pickup options.

Israeli company B&G Guitars first came to prominence in more innocent times with a range of designs based on its handbuilt Little Sister – an electric semi-solid slot-head parlour model that leaned heavily on early Gibson visuals to create a vintage guitar that never was.
While that design remains available in several versions and price-points across a newly-robust international dealer network, B&G has since branched out into both acoustic and solidbody guitars… including this, the new Helena. And it’s quite a departure.

Removing this guitar from its padded gigbag, we’re greeted by the sight of a vintage-style sunburst over a one-piece mahogany body. But the double-cut design is nobody’s Little Sister, being equal parts Gibson SG, Teisco, Silvertone and Maton, with just a dash of Burns. The nitrocellulose finish is open-pored and B&G expects it to relic nicely as you subject the instrument to bouts of frenzied artistic expression over the course of its life. 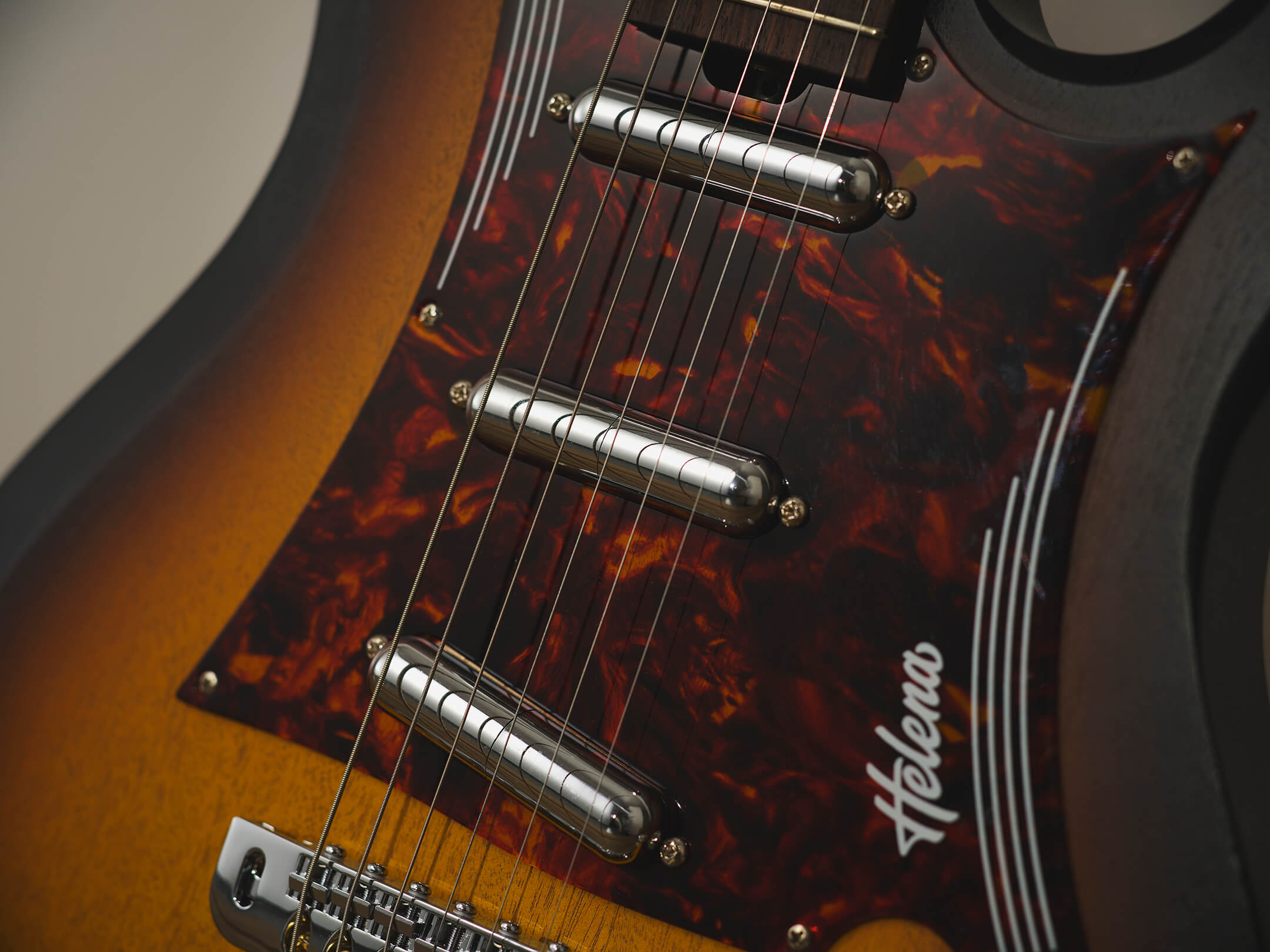 Never shy of defying expectations, B&G has opted for a four-bolt neck join featuring an elegantly swept heel. That sunburst finish extends from the body join to the 12th fret, where it becomes a solid TV yellow up to the headstock; the neck itself is a vintage V-carve that fills the hand comfortably. The truss-rod is single action only, which B&G prefers as it allows for a smaller channel to be cut.

Typically of B&G, the Helena is available with a number of different pickup options, including a Junior-like single P-90, double PAF-style humbuckers and, most intriguingly of all, the triple lipstick stance featured on our review guitar. Although most commonly seen on budget guitars by Danelectro, the lipstick pickup’s sibilant voice has an undeniable appeal: as soon as Stevie Ray Vaughan had a Strat fitted with a set they became indelibly stamped with coolness, and now you’ll see them in everything from Fender reissues to boutique instruments by luthiers such as California’s Scott Walker. 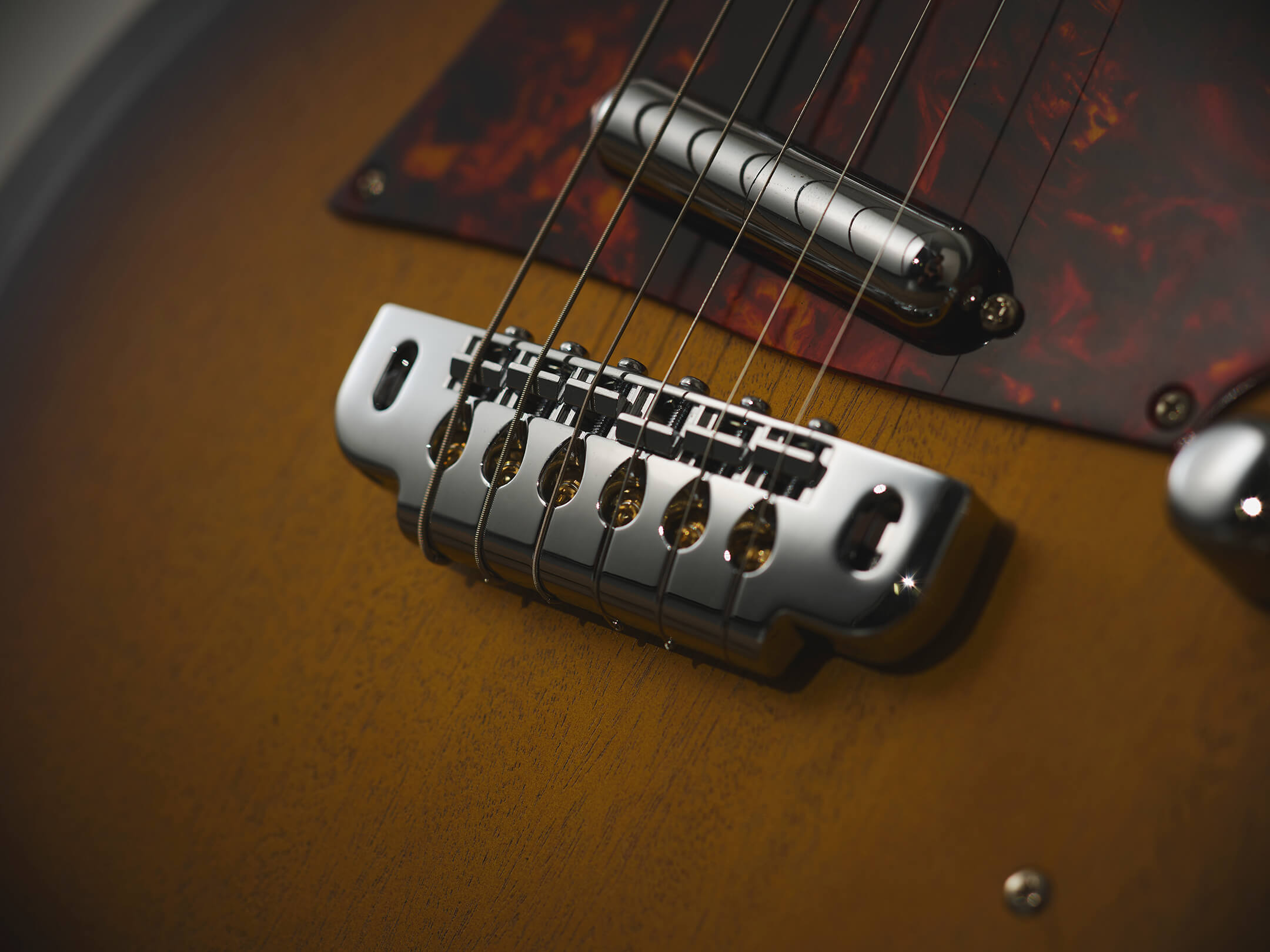 We’re immediately taken by the relatively light weight of this well-balanced instrument. The lines and carves are sharp, and approach Nik Huber levels of precision. The rosewood-capped headstock is less of an immediate success, simply in the sense that it doesn’t stand out from the crowd in the same way the body shape does. Anyway, it fulfils its pragmatic purpose as somewhere for B&G to put those custom Gotoh tuners as well as screwing in its metal logo.

While the intriguing hybrid scale length of 25⅛ inches feels good along the whole of the fretboard, the overall playing experience is comfortable rather than luxurious. The fretwork is well executed but, when you consider that production guitars are now hitting the market fully Plek’d, there is a little room for improvement in the initial setup in terms of both action and intonation. Mind you, the same could be said of many instruments with a wraparound tailpiece and at least this one offers the possibility of individual saddle adjustment. 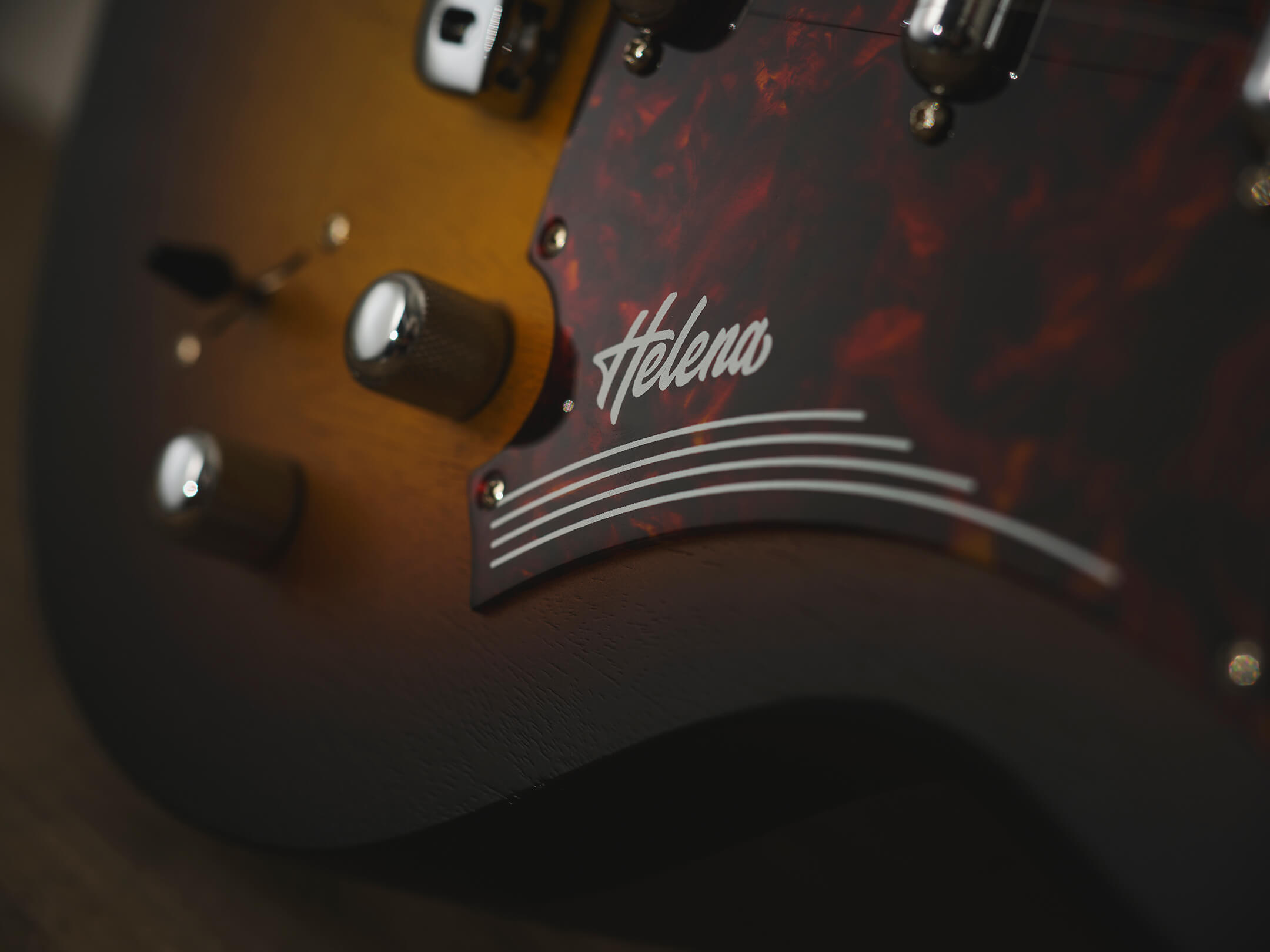 ‘Shimmer’ is the word most commonly used to describe the low-output voice of lipstick pickups, and the Helena does not disappoint in that department. Starting off in the bridge position we hear a beautifully liquid clean voice that’s high in top-end information and upper overtones, while maintaining a smooth attack even with a heavy pick. That’s not an easy trick to pull off and one that certainly bodes well.

But as good as this sound is, it’s perhaps the least convincing clean timbre on offer here: as we move along the five-way selector, we encounter some frankly ridiculously silky sounds that, with amp reverb alone, are pretty life-affirming. Positions two and four are the most obvious candidates, with a beautiful quicksilver feel to chords and arpeggios. This is not a Stratocaster, and yet these are some very high-quality Fender-ish sounds – suddenly that sunburst starts to look increasingly 1954-flavoured. 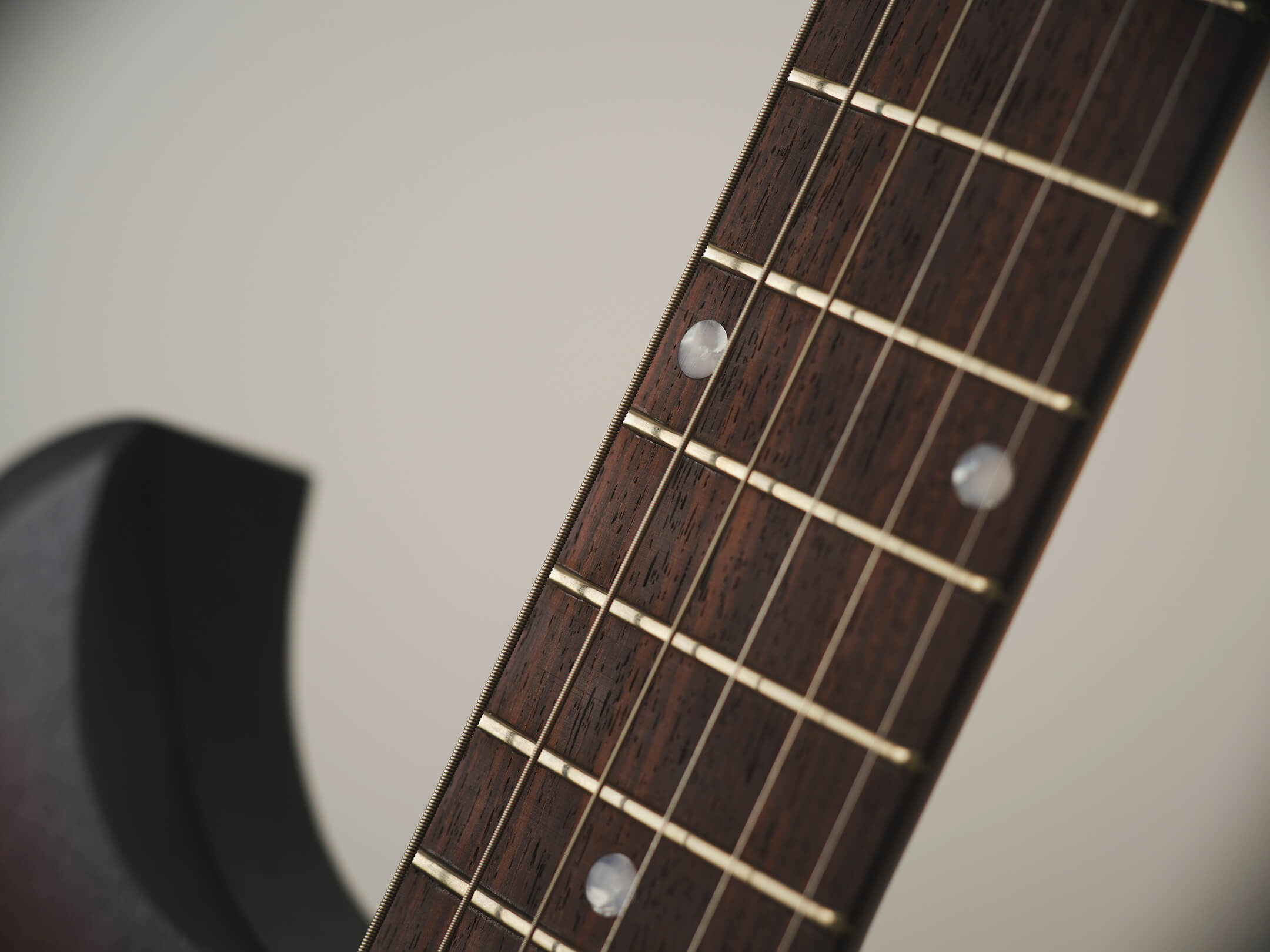 The middle and neck pickups on their own are also very expressive, with an immediate response that makes our playing sound extra-classy. The output is relatively high for lipsticks too… although if you’re planning to run multiple guitars in your live rig, then a boost pedal of some kind will still probably be useful for levelling up.

Dialling up the amp gain brings out a satisfyingly chewy grunt from the bridge pickup. It’s the sort of lo-fi vintage grumble that many would associate with an old Melody Maker or any number of gold-foil-wearing retro-styled guitars currently available. 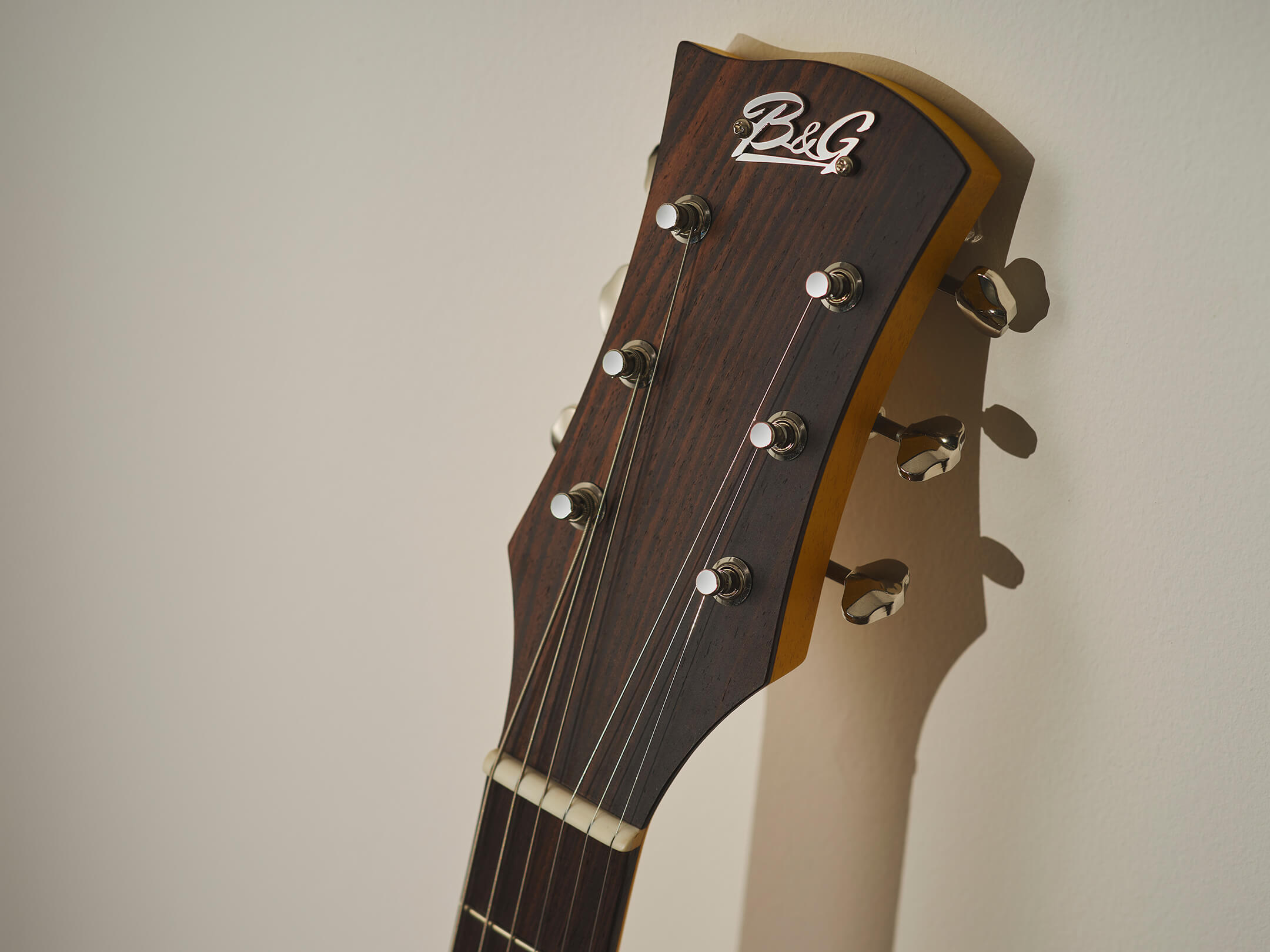 As we head towards the neck pickup we find that the overdriven sound becomes increasingly indistinct, bordering on the woolly as we add even more gain – not unlike a neck-mounted P-90, in fact. Our best results are found on the edge of breakup, the in-between sounds in particular gaining a cocked-wah vocal character that’s highly musical.
Once we start adding effects, the Helena really hits its stride – moody tremolo, backwash reverse delays and dirty flange all sound as good as they do with pretty much any other instrument we’ve played, and in some cases better. Tape delay with crunchy repeats is absolutely wonderful. 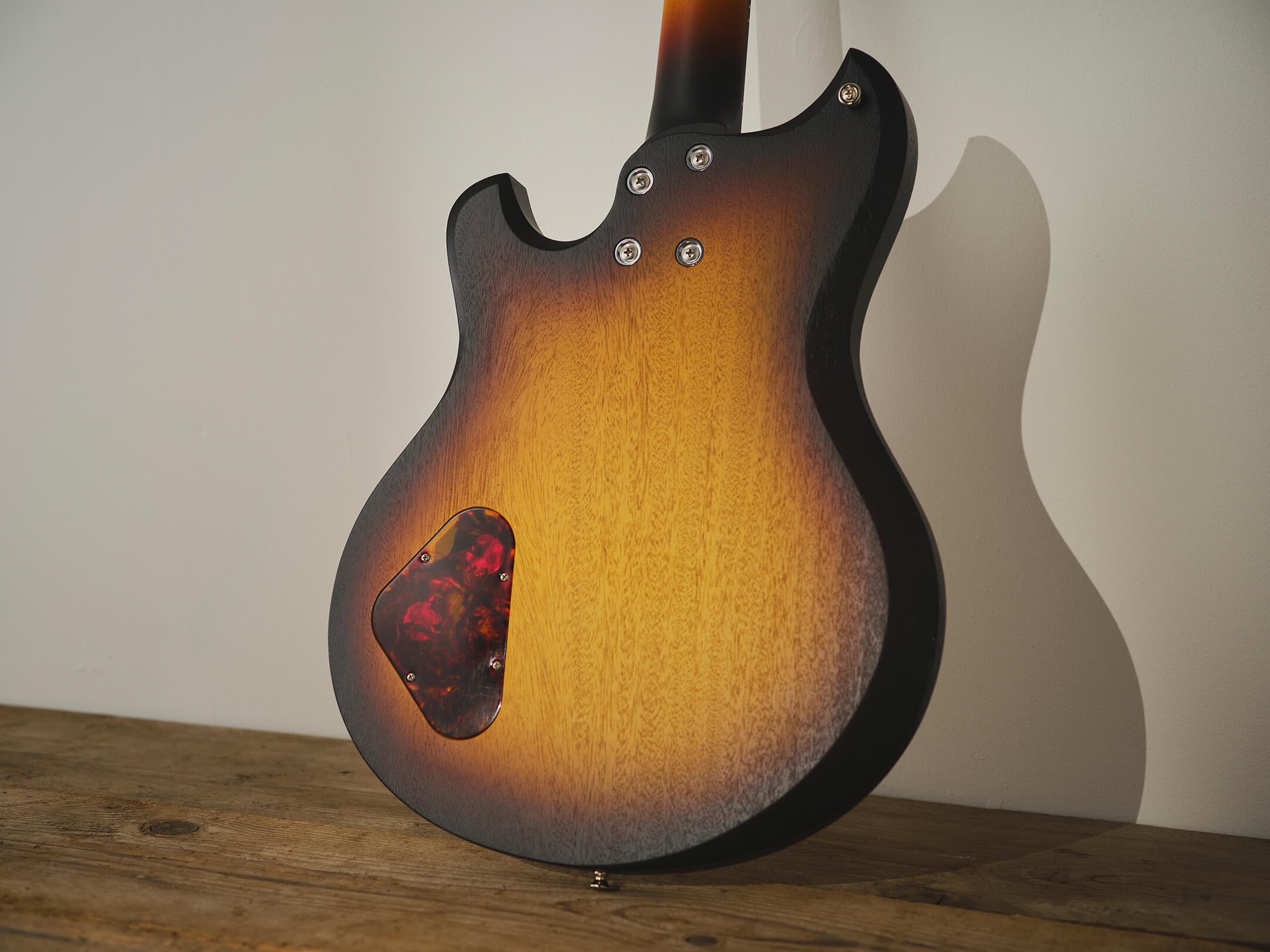 Seeing as we’re veering off into more esoteric territory, a Big Muff-style fuzz feels more than appropriate – and the results are a borderline illegal amount of fun. The Helena is capable of some very heavy and aggressive sounds when sufficiently riled, with that mild-mannered clear shimmer of the lipstick pickups mutating into all manner of madness, ranging from squalling harmonic feedback to a triumphant wall of chainsaws with a flick of the pickup selector.

The B&G Helena is capable of some truly stellar sounds – they may not be the most mainstream tones but we all know where to go for those. This is something else, something cool.