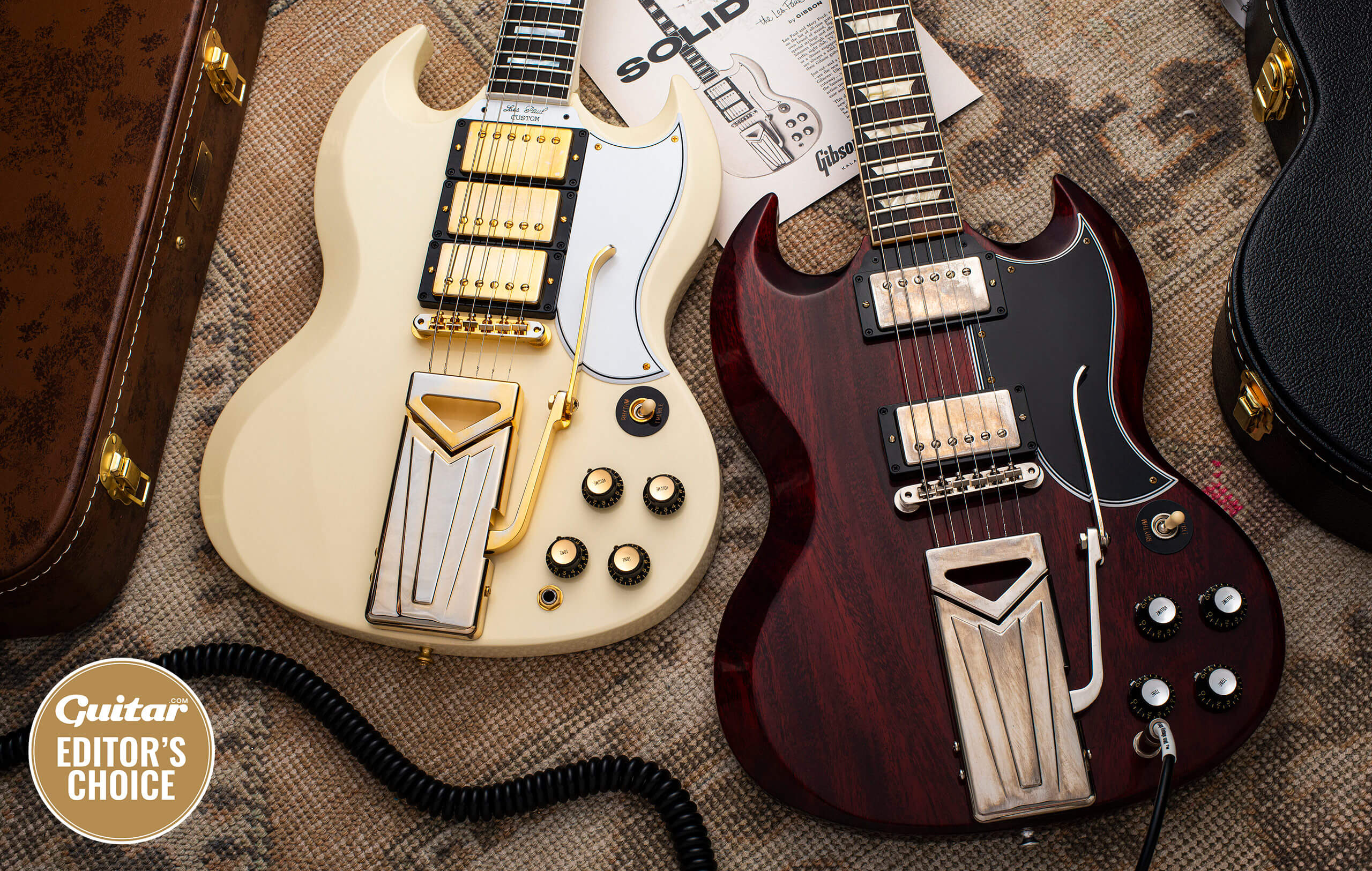 The first adverts for Gibson’s newly redesigned Les Paul signature models described them as a ‘solid hit’. It may have seemed presumptuous at the time, but you can’t argue with the sales figures and, unlike other iconic Gibson designs, the SG, as it would become known, has never been out of production.

Other than repro ads among the case candy, and engraved and painted logos on the control cavity covers that read ‘A Solid Hit For 60 Years’, anniversary branding has been kept to a minimum. But you’ll have to move fast if you want one – these guitars will only be available during the anniversary year.

The first features that strike us are the mahogany body’s fabulous grain pattern and the shade of the deep cherry finish. Gibson is once again using fretboard binding with a vintage-correct colour and thickness, and the aged celluloid nitrate inlays look especially good. Although Brazilian rosewood is long off the menu, this Indian rosewood board is suitably dark and there are no traces of sanding lines.

The vintage-spec frets have been installed flawlessly and the fret nibs are uniformly perfect. For a factory manufactured guitar, this is impressive stuff, and we’re pleased to see a nylon nut and a headstock that tapers in thickness by almost 1.5mm. It’s a vintage reissue, so the details matter. 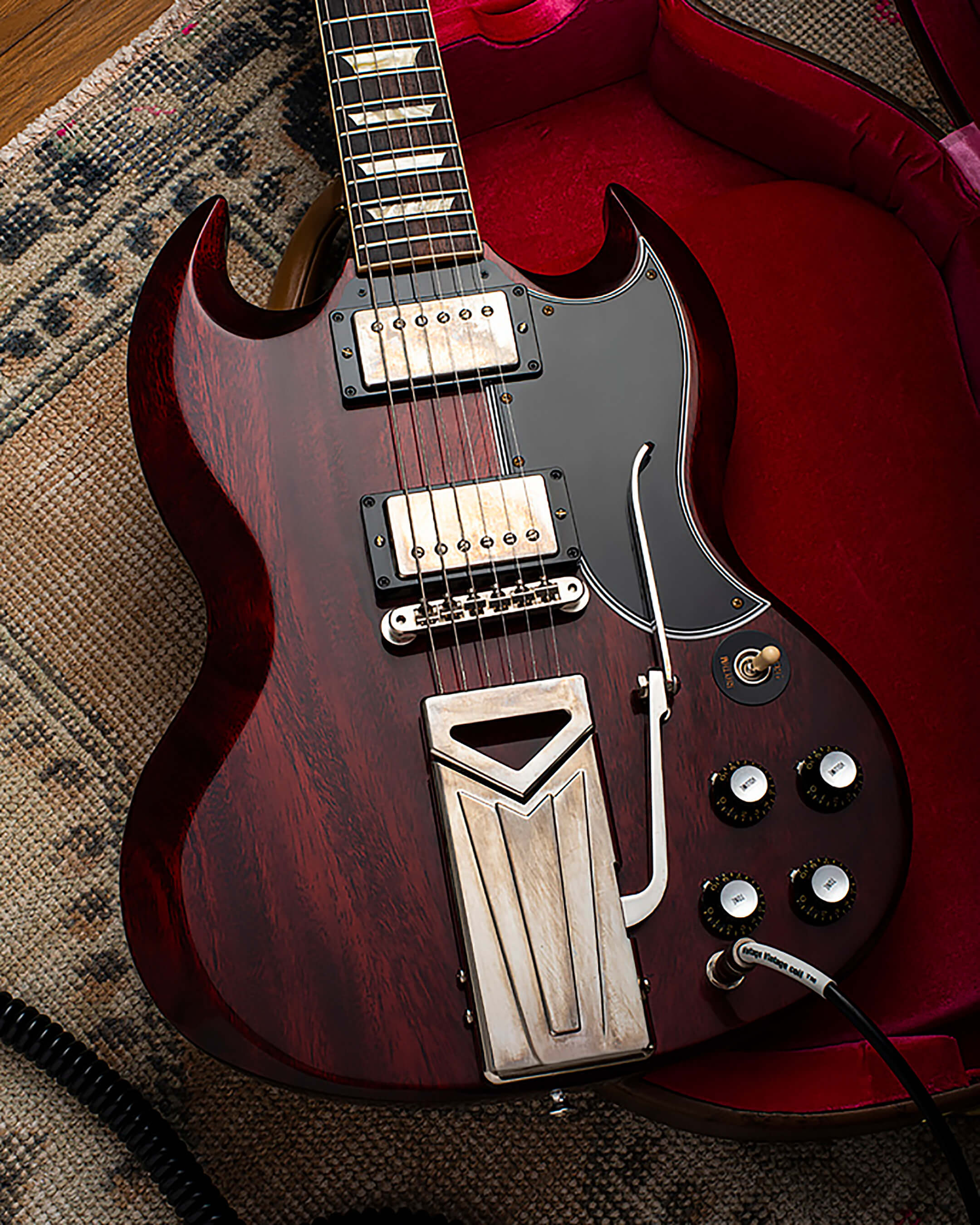 In that spirit, the Kluson Deluxe tuners have double ring buttons, and like the pickup covers, they’re lightly aged. The tiny dimples around the cover screw holes are another nice touch and the shape is pretty close to vintage PAF specs.

A wireless nickel-plated ABR-1 bridge is teamed with Gibson’s Sideways Vibrola complete with foldaway arm. In its stashed position, there’s not much room left for the controls and access to the neck pickup’s tone pot is compromised. But that’s the way it always was, so that’s the way it is here.

We like the plastics too. The ‘Les Paul’ truss-rod cover has a vintage-correct ledge and the four-ply pickguard’s bevel is spot-on. Other period details include the way the Cherry finish is bleeding into the neck binding edge – at present it looks suitably vintage, but we hope it stops where it is.

The Custom represents the ‘more is more’ school of guitar design. More binding, more pearl and, most significantly, one more pickup. Here we have three Custombuckers rather than two, and of course of the metalwork is all gold-plated. Thankfully, subtle relic’ing has kept things just on the right side of bling.

When the first SG Customs were made, the paintwork and plastics were perhaps intended to match more closely, but the contrast between the three-ply pickguard and creamy Polaris White finish is an iconic look. Here, the Les Paul branding appears on the plastic plate that bridges the gap between the fretboard and the neck pickup and conceals the neck tenon.

As befits a Custom, the fretboard is ebony with pearl block markers and there’s a split-diamond headstock inlay. Happily, the controls are easier to figure out than you might think. The three-way toggle switch selects neck, middle plus bridge and bridge alone. When the switch is in the centre position, the bridge pickup’s volume and tone controls act on the middle pickup too.

A peek under the covers – which can be swapped for plain covers provided in the cases if preferred – reveals Gibson-branded CTS potentiometers with replica Black Beauty tone capacitors and yellow plastic insulated wires. Everything has been hand-wired to a very high standard and looks suitably vintage-correct, albeit with the tone controls connected 1950s style.

The Custom feels heavier and has a slightly chunkier and more rounded neck. In contrast, the Standard’s neck has a wide and slim D profile that feels pretty much spot on for a 1961 Gibson. Both are superb and we have no clear favourite.

There’s quite a contrast in the unplugged tones too, with both guitars exhibiting impressive resonance, but in somewhat different ways. The Standard has more woodiness and warmth, with the liveliest transient attack. The Custom is louder, brighter and clearer, with slightly compressed transients and noticeably longer sustain. 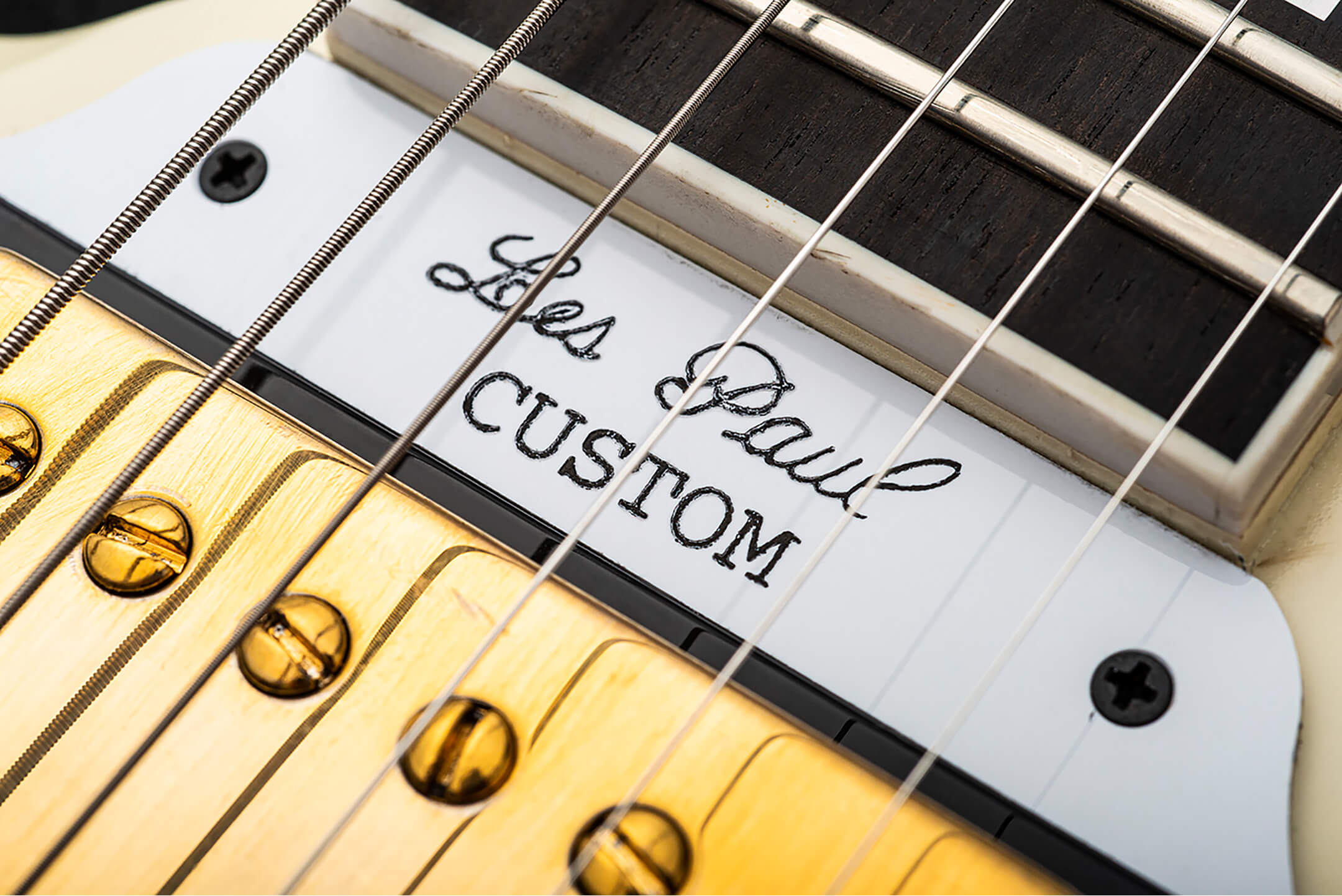 Before getting into the amped up tones, we should mention the Sideways Vibrolas. All attempts to use them are accompanied by unwelcome mechanical noises and both guitars go straight out of tune. Despite these failings, at least we can say that the vibrato performs a useful function on the Custom. Thanks in part to its Grover tuners, without it, this guitar would be inconveniently neck heavy. Happily, the added bulk at the body end results in near-perfect strapped-on balance.

Through a 20-watt Marshall head, the tonal differences are even more apparent. Without stompbox assistance, the Standard struggles for sustain and never quite achieves the singing bloom of the Custom. We like the Standard’s woodiness and it excels for rhythm and slide duties, but it doesn’t really cut through mixes that well and we can’t quite channel our inner Angus. 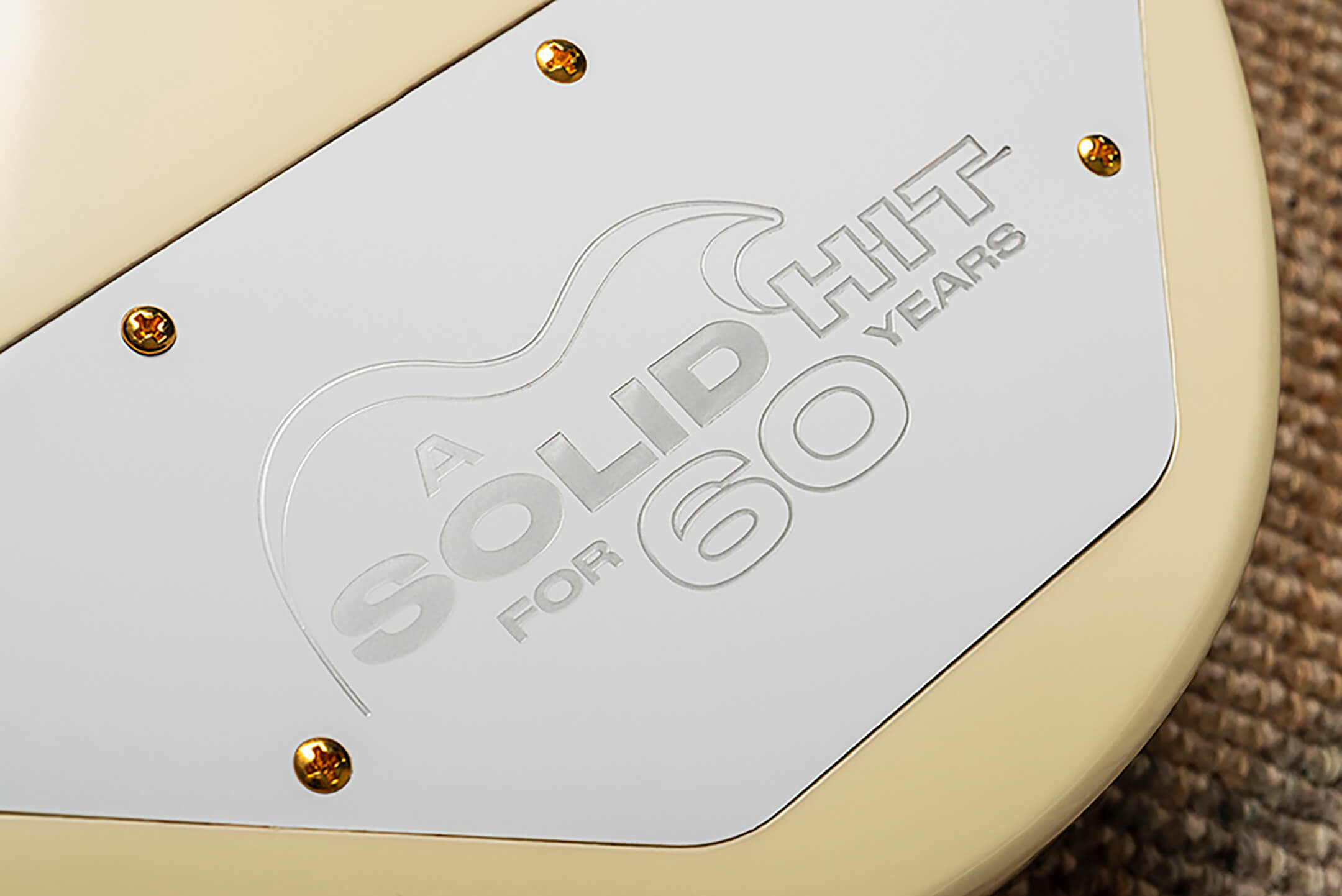 The Custom has no such difficulties, always coming through cleanly and clearly irrespective of pickup settings. There’s a far broader range of tones, with a wiry nasality on the bridge and a sweetly vocal bite on the neck. The middle setting adds depth and complexity to the bridge pickup, along with a hint of midrange scoop. It’s not a million miles away from the sound of a neck-and-bridge setting with the bridge pickup knocked back a touch on the volume control, and it offers a slightly different but likeable tone.

Admittedly, there’s always some degree of variation between apparently identical guitars. Were we given another two review samples, we wouldn’t be surprised if the tables were turned. But overall, the Custom wins out here due to its precise attack, its definition, its extra aggression and its easy sustain. Since the Custombucker pickups are unpotted, any contact can be heard through an amp, so if you are one of those players whose pick collides with middle-position pickups, be aware that you’ll have to adapt your technique accordingly.

Other than the somewhat archaic vibrato design, both guitars are hard to fault for build quality and playability and it’s clear that Gibson has recently made tremendous strides forward in those areas. It’s pleasing to see Gibson making such great guitars again and these SGs are a fitting tribute to a classic electric guitar design with timeless appeal.