With a single owner from new, this White Falcon from the tail end of the Baldwin era is in near-mint condition and comes with a case that looks like candy. Time to embrace the bling… 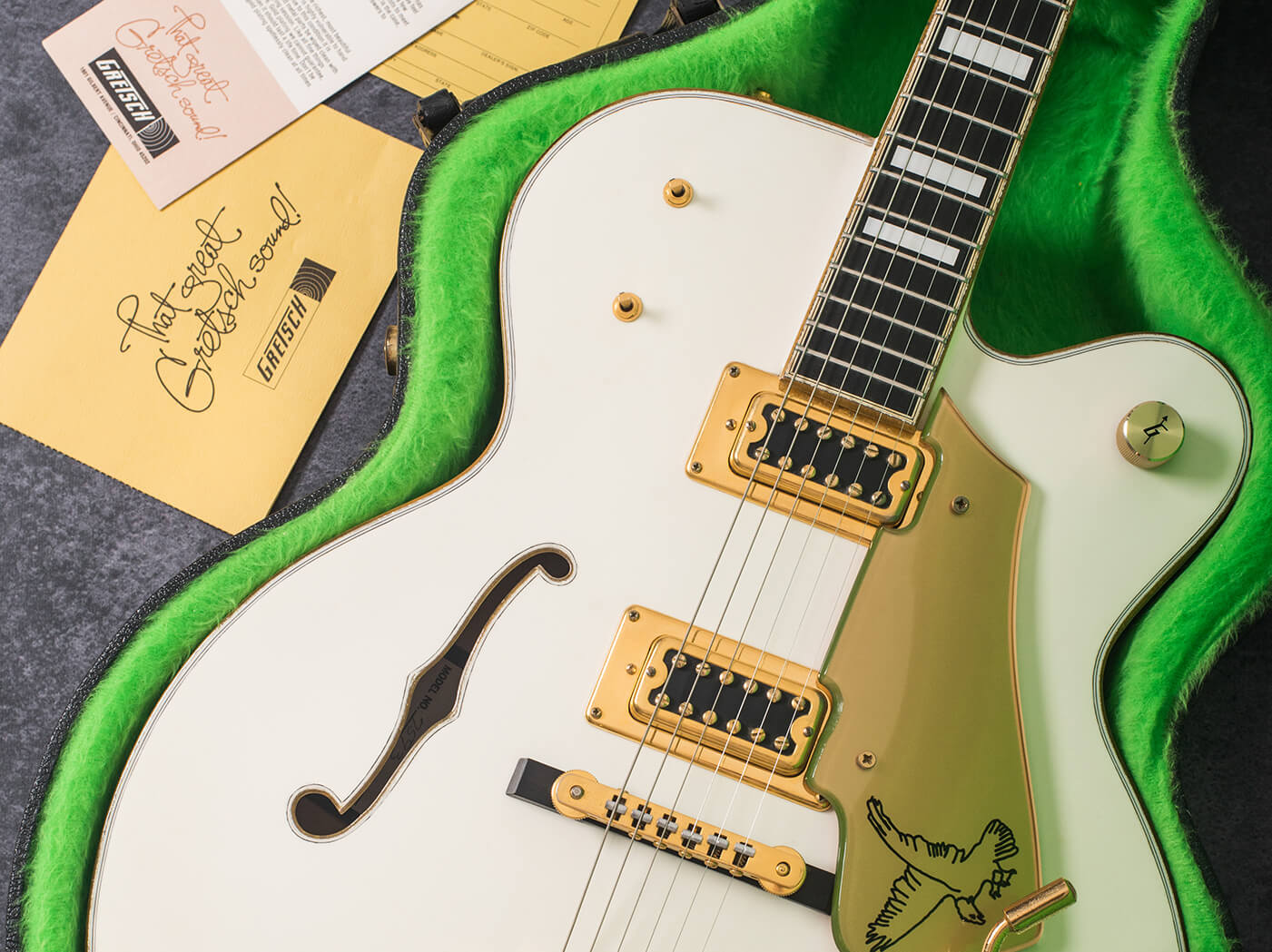 If you think this guitar is flashy, it really has nothing on its case. When we first open it up, the most striking thing isn’t the Gretsch inside, but the furry dayglo-green lining. To upstage a White Falcon is no small achievement, but fear not – this is still a guitar that will get you noticed.

At 40 years of age, it’s indisputably a vintage instrument, but if it can be said that Gretsch had a ‘golden era’, this White Falcon was made some time afterwards. Yes, this is a Baldwin-era Gretsch and as such, it’s quite different from the guitars made in the original Brooklyn factory.

Fred Gretsch took the decision to sell his company to piano manufacturer Baldwin in 1967. By 1970, the new owners were in the process of shifting Gretsch production 1,000 miles away from Brooklyn to Booneville, Arkansas. Baldwin already had piano factories in the area and labour was cheaper, but few of the New York workforce – the folks familiar with the process of building Gretsch instruments – made the move.

Consequently, build quality suffered and even the company’s main endorser Chet Atkins declared: “They just couldn’t build Gretsch guitars at Booneville.” By the early 1980s, he had shifted his allegiance to Gibson. Baldwin Gretsches have always been somewhat stigmatised, although some Gretsch fans argue that it’s not entirely justified.

So what can we say about this Gretsch, which was made in the year before Baldwin decided to cease guitar production? Build quality is a tough thing to quantify and it might be helpful to approach it from two different angles – structural integrity/playability and standard of finish.

We have no concerns about this guitar’s solidity, because it’s built like a tank. Weighing in at over 10lbs, it’s heavier than many 1970s Les Paul Customs and the neck joint is as solid today as when it left the factory. Considering Booneville’s reputation for flimsy neck joints, that’s quite something. We’ll discuss the playability in detail later, but suffice to say, the neck is arrow straight, action is low and the guitar plays perfectly.

Writing regularly about vintage equipment, we are able to distinguish between finish flaws and the inevitable wear and tear that goes with the territory. However, there can be no confusion here, because it’s clear this guitar has spent more time on display than on stage and since it’s in near-mint condition, no allowances are necessary.

The white lacquer has yellowed slightly and it was laid on very thickly – you can see and feel a distinct step where the white was scraped back, or masking tape was removed, to reveal the multi-ply black/white and gold-sparkle binding. These edges are far from crisp and the transition along the fingerboard binding is particularly sketchy. The paint is also fairly uneven and the gloss has subsided to a dull and slightly sticky surface.

The most bizarre aspect, however, is the filler around the neck joint. Whatever they used back in Booneville, it was slathered on in large quantities and appears to have been wiped smooth with someone’s finger rather than sanded.

It’s also clear that Baldwin was cutting costs and the chunky Switchcraft switches that Gretsch always used had by now been discarded for a pair of cheaper toggle units. Don’t be deceived by the gold plating – these are the type you can source from electronics outlets. What’s more, the lack of corrosion on the knobs can be attributed to the fact that they’re metallised plastic, while the head of the screw fixing the Bigsby to the top of the body is too large to fit into the countersink on this B12.

The ebony bridge base has either warped over the years or no attempt was made to fit it to the top in the first place. On the plus side, the bridge appears to be pinned because it doesn’t move and the individual saddle adjustment means this Gretsch definitely plays in tune. The Grover tuners work really well too, and those big buttons tally with the White Falcon’s ostentatious image. Just try not to look too closely at the fingerboard inlays, because some are not square with the frets.

The two-way truss-rod adjustment mechanism is another period curiosity. Prior to acquiring Gretsch, Baldwin bought Burns and the system fitted to this White Falcon is actually a Burns design. Adjustments are made by removing a cover plate adjacent to the heel and inserting a special tool to turn the 16:1 gear mechanism. Unfortunately, this tool isn’t supplied with the guitar, but the relief is perfect at the time of writing and we sense that this isn’t the type of neck that has a tendency to move.

It’s hard to tell through the characteristically small Baldwin-era f-holes, but it appears that a series of wide notches was cut into maple brace stock, allowing it to bend and conform to the inner curve – exactly like kerfing on the rims of an acoustic guitar.

Two of these kerf/braces are glued to the back and they’re both about an inch square. Glued between them, directly below the bridge, is a substantial block of mahogany and an inspection mirror reveals that there are two more of these braces on the top.

All this wood undoubtedly contributes to the weight and the fact that, acoustically at least, this White Falcon is nothing like our trestle-braced 6120. Despite being large and hollow, the White Falcon sounds and sustains much more like a loud solidbody and its slinky feel and slim-necked playability is more rock than rockabilly.

Any concerns about the finish quality quickly evaporates when you plug in because the ‘black top’ Filter’Trons sound just as good as 1960s units. They can growl, chime and bite – generally simultaneously – and one big advantage of the body’s rigidity is that it takes a lot of volume to make it feed back.

The switches feel as cheap as they look, and the tones offered by the ‘mud’ switch are predictably unappealing – but after a few squirts of DeoxIT in the pots, you’ll soon be channelling your inner Stephen Stills and Billy Duffy. Vintage White Falcons are rare, and rarer still in this condition, but this one could be yours for less than the cost of a nitro-finished reissue.