Having wowed us with the Lester single-cut, Maybach’s Albatroz offers another take on a familiar vintage theme for sensible money. 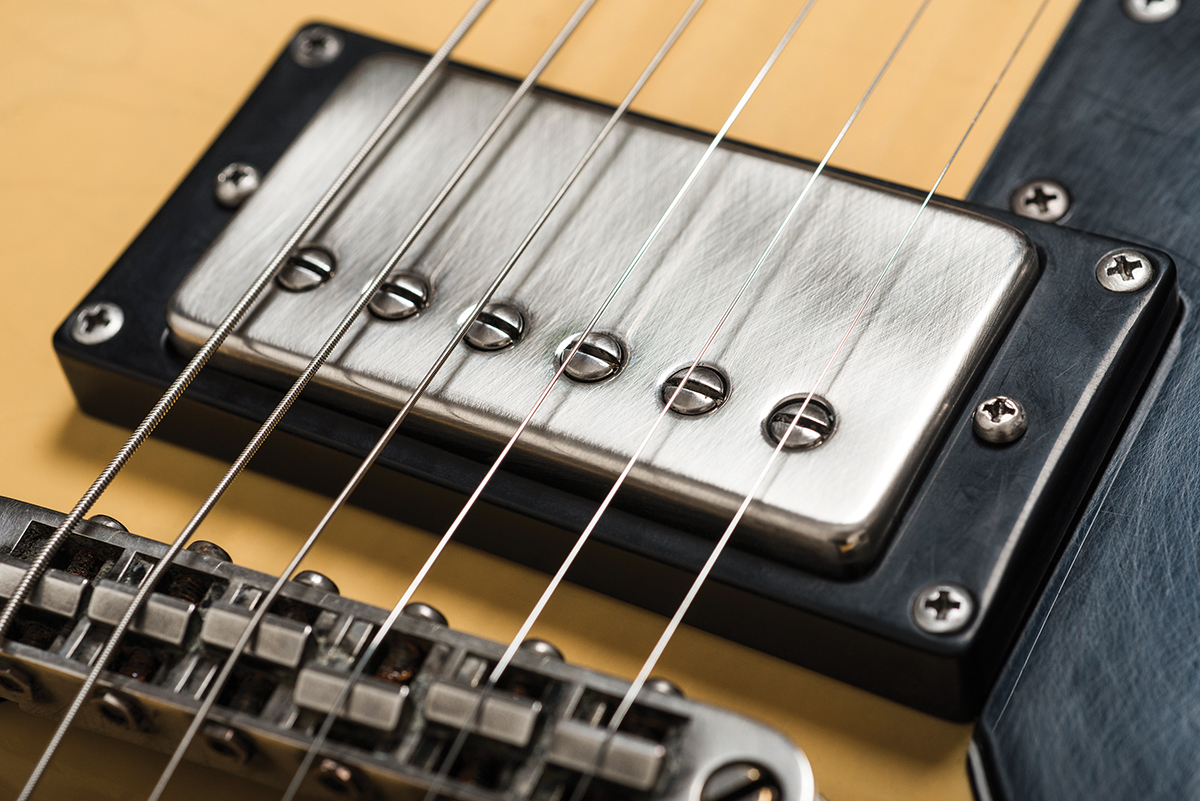 Maybach isn’t coy about what this guitar is all about. What the Lester models are to Les Pauls, the Albatroz series is to SGs. Until recently, all of Maybach’s Albatroz models replicated the single-P-90 ‘student’ model, but this is the first with double humbuckers – a set of German-made Amber Spirit Of ’59 PAF replicas.

The Albatroz even has the little three-ply plastic insert between the neck pickup and the end of the rosewood fingerboard that characterises the earliest SG Standards that came equipped with PAFs. Besides being a clever little design motif that echoes the shape of the fingerboard’s pearl inlays, it goes with the original pickup positioning and neck join. On later SGs, the neck appears to be set a little deeper into the body and the neck pickup ring butts up against the fingerboard. 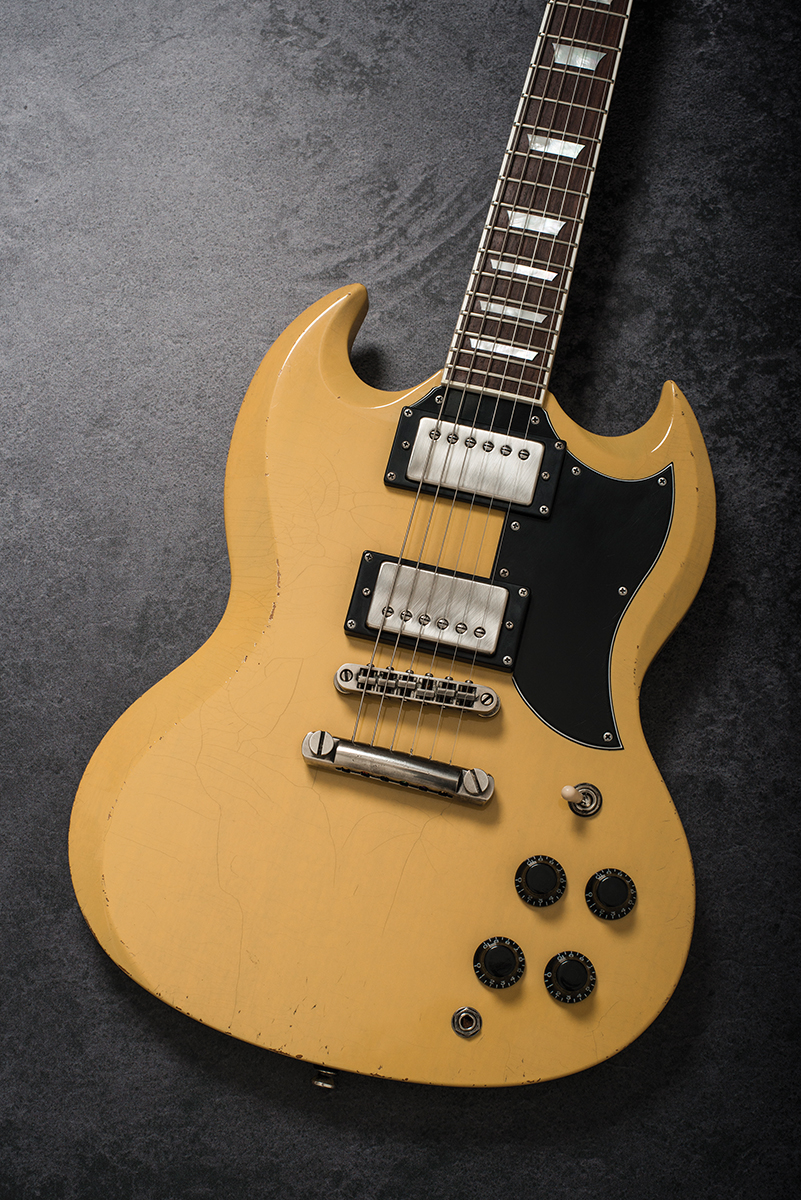 It’s well documented that Les Paul felt there were inherent problems with the SG design and it has been suggested that he declined to have his name associated with the model. In subsequent years, even the most diehard SG proponents would probably concede that Les made some fair points. With its ultra thin body, the SG’s neck join has become notorious for its weakness.

What’s more, the skinny necks that featured on some of the early 60s models gave the SG a somewhat ‘whippy’ quality – part guitar, part bow and arrow. Pete Townshend exploited the SG’s lack of rigidity to great effect, but many owners endure an ongoing struggle to keep them playing in tune.

For this reason, we’re pleased to note that Maybach is building the Albatroz with a fair degree of heft to the neck. It’s by no means a fat 50s profile, but there’s sufficient depth to the D profile here to ensure a far more stable and solid feel. Maybach describes this as the ‘Handy 65’ neck shape.

The neck, like the body, is carved from solid mahogany and it’s just about possible to make out the grain through the TV Yellow nitro finish. We’re not sure that Gibson shipped any early SG Standards with this finish, but one of the best things about tributes is that you can have the feature set that you want rather than be constrained too much by vintage correctness. 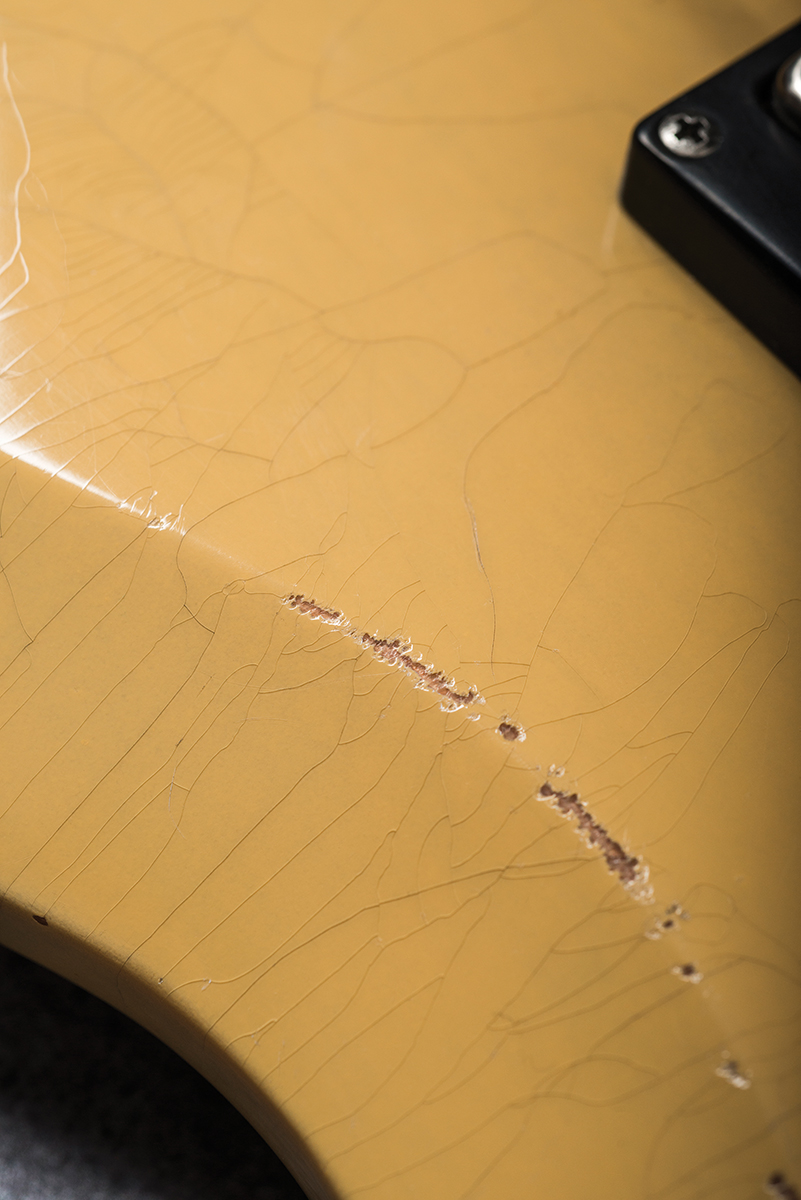 Ditto the artificial ageing and, as we have come to expect from Maybach, it’s rather well done. There’s restrained and convincing lacquer checking, with some light chipping around the edges. The newness is taken off the nickel plated Gotoh hardware and the plastic parts are devoid of glassy shine, but there’s no sense that arbitrary damage has been inflicted and the guitar has a look that’s clean and inviting.

We’re not quite so impressed with the thick fingerboard binding or the sharp lacquer line running all along its length. We suspect the binding was masked off when the TV finish was applied and the clear lacquer top coats have insufficient depth to smooth the transition. Damage has also been done to the clear lacquer through rough fret edge dressing when the bevel was being created.

Fortunately we have no such quibbles about the electrics, with CTS pots, cloth covered hookup wire and exceptionally neat soldering. Maybach has also lined the control cavity and cover plate with copper foil – always nice to see. 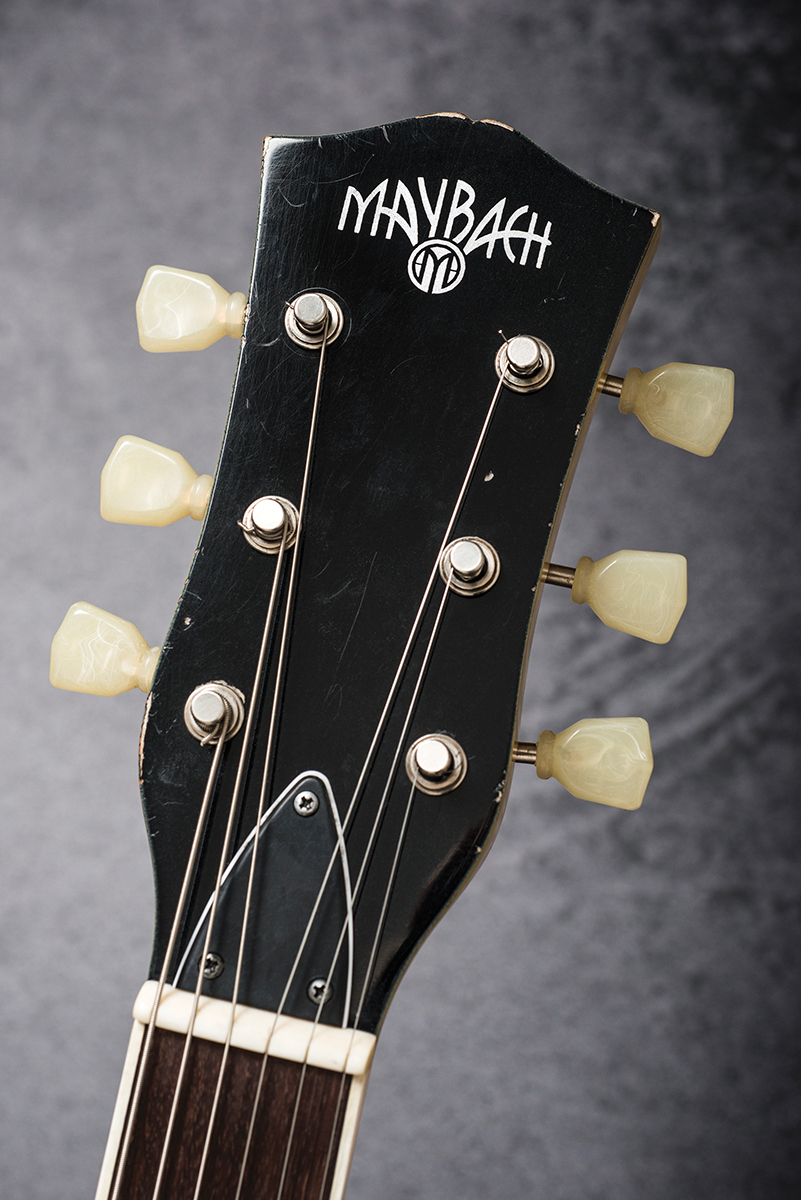 Through the employment of vintage Kluson-style tuners, the neck heaviness is kept to a minimum and while we were slightly underwhelmed by Maybach’s neck profile on the Lester model we reviewed, the carve here feels entirely in keeping with the style and vibe of the Albatroz.

With a low and slinky action, the Albatroz arrives with a decent setup. Our only gripe is an A string nut slot that’s cut a tad too deep, which causes the open string to buzz.
Acoustically, the Albatroz gets off to a flying start. The unplugged tone has a fast and lively response with an abundance of harmonics, an even response across the frequency range and plenty of natural sustain. After a pleasant interlude of Townshend inspired strumming, we get serious and fire up a Vox AC10.

Although the pickups are the same units we tried on the Maybach Lester, we are slightly more impressed with their tone in the Albatroz. Once again they are quite microphonic, but this time the midrange dominance isn’t as pronounced and we hear an effervescent bite at the front of single notes and more tautness from the low strings.

The bridge combines nasal upper-mid honk with a hint of twang that is undeniably ‘vintage’ in nature. Chords have a satisfying ‘brrrang’ quality, with superb string-to-string definition and an in-built compression that’s ideal for rhythm playing and fingerpicked slide. 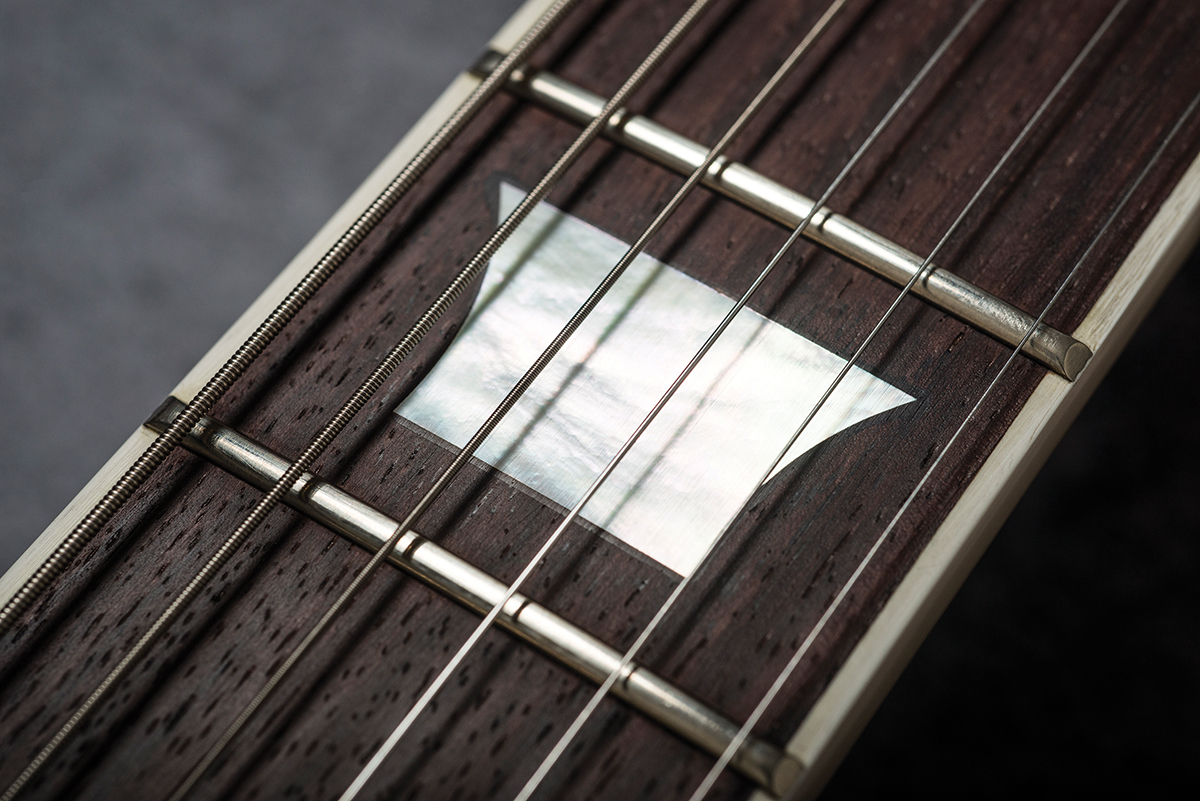 Perhaps surprisingly, the acoustic airiness that’s almost entirely absent from the bridge setting comes through with the neck pickup. It’s a smoother, more rounded and woodier tone, but it’s an ocean away from the pseudo jazzbox tones you can pull out of a Les Paul. All in all, the clean tones are serviceable, in the way they tend to be with SGs, but the Albatroz finds its true voice through a cranked amp.

Cutting straight to the chase, the Albatroz is a very fine SG-style guitar and to borrow a telling phrase that’s recently been heard a lot around these parts… “it sounds just like the records”. The bridge setting may not be as versatile or nuanced and a Les Paul, but for straight ahead rock tone that will cut through any mix, it’s hard to beat.

With the Albatroz, you get a fine contrast from the neck pickup that can veer in tone from flutey to something that’s closer to a clarinet. What the Albatroz lacks in complexity and versatility is balanced out by a directness and no nonsense simplicity that’s very easy to fall for. It does get a tiny bit muddy when you turn down and, depending on your amp settings, the tone controls may venture beyond ‘woman tone’ into muddiness. But for vintage-voiced blues, rock and metal tones it’s the real deal. 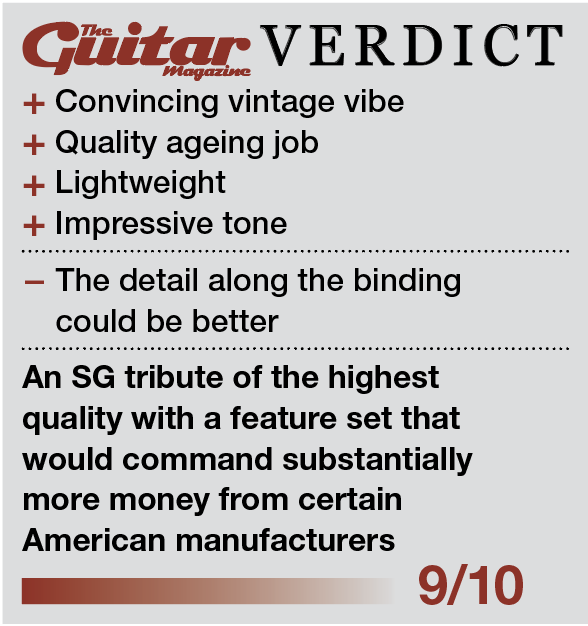