An exotic bolt-on hot-rod crafted lovingly in Shropshire. Will Chris Vinnicombe have a timber tantrum? 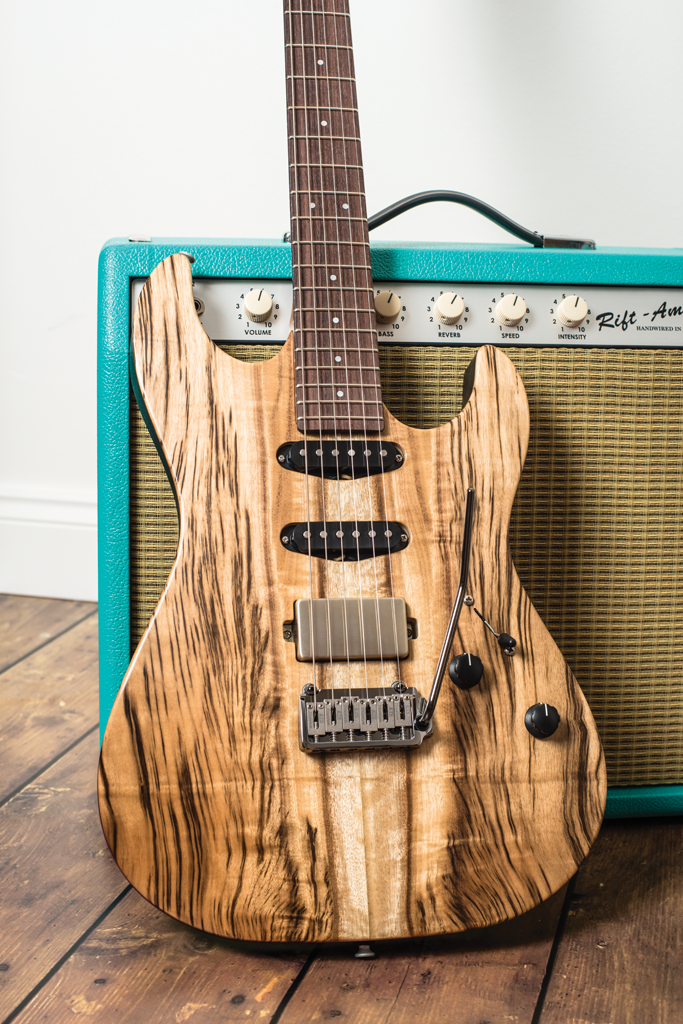 In 2015, Patrick James Eggle’s glorious Macon Carved Top scooped a highly commended badge in the `best electric guitar over £1,000′ category of our Gear Of The Year awards and heralded the return to electric manufacture of one of the UK’s finest luthiers. As we wrote at the time, “and what a return” – the chambered double-cut was a work of fine six-string art with serious tones, glorious tonewoods and a fabulous neck.

Georgia is once again on Eggle’s mind as he follows the Macon (named after the city known as `the Heart of Georgia’ that gave birth to Little Richard and raised Otis Redding) with the 96 – named after the state’s west-east highway. Based on a personal gigging guitar that Eggle developed over a decade ago while living in the Netherlands, the 96 is available in Carved Top and, as here, Drop Top incarnations, the latter so-named because of the way its top follows the curve of the forearm contour.

Our review instrument’s top is a striking section of myrtlewood; Eggle, long a devotee of exotic timbers, describes its tonal properties as similar to maple, but while maple “grows like a weed” all over North America, myrtlewood (Umbellularia californica) is considerably more scarce, much-prized and native only to the coastal forests of California and southern Oregon. 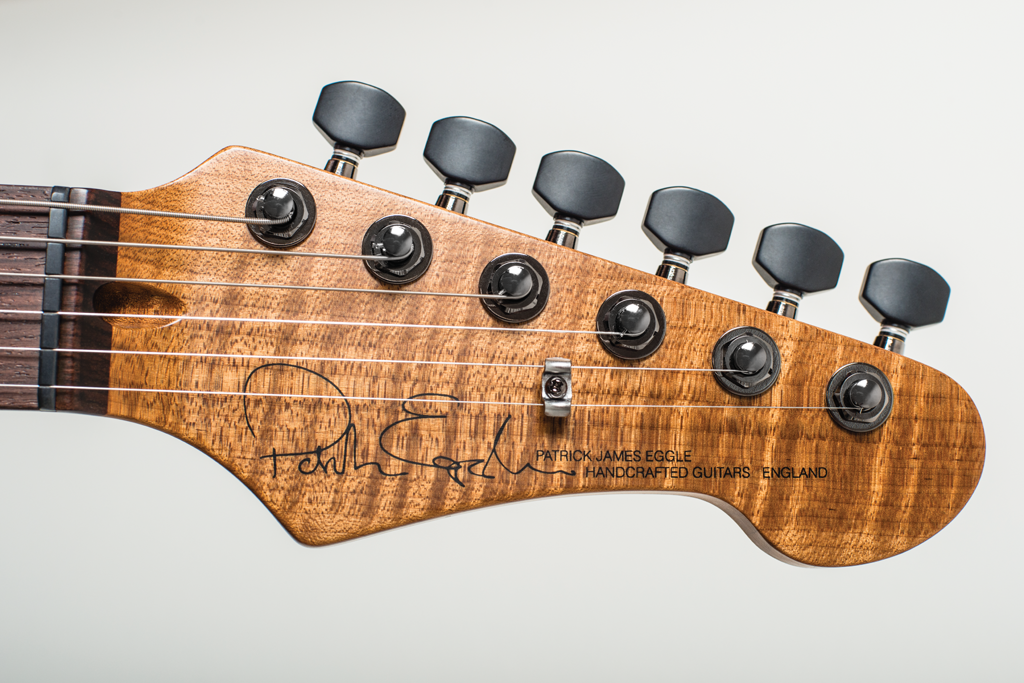 It’s not just the wood that’s special or carefully chosen here; the smooth-operating Gotoh vibrato bridge features a bespoke block hand-milled from solid bell brass and custom KTS titanium saddles, while the handwound pickups come courtesy of Mojo Pickups’ Marc Ransley in West Yorkshire. All three pickups are scatter-wound and feature alnico V magnets. The neck and middle single coils are wound with 42-AWG wire and have a DC resistance of 6 and 6.2k respectively, while the 14k bridge humbucker is wound with 43-AWG wire.

If the 96 is the Fender-style yin to the Macon’s Gibson-esque yang, in common with every example of Patrick’s luthiery we’ve ever encountered, the 96’s neck feels instantly inviting. Aside from the visual appeal of the incredible figuring in the roasted maple that shimmers under lights like water lapping at the shore in some tropical lagoon, it also smells delicious – like caramel.

We’ve discussed the weight and resonance benefits of torrefaction in these pages several times of late and are confirmed believers, but it certainly doesn’t do a neck any harm when it’s also carved into a beautifully soft V shape that disappears into the smoothly rolled edges of a Santos rosewood fretboard, the access to the upper reaches of which is an absolute joy thanks to an elegantly engineered heel. We’ve said it before and we’ll doubtless say it again: Patrick knows how to make a fine guitar, alright. 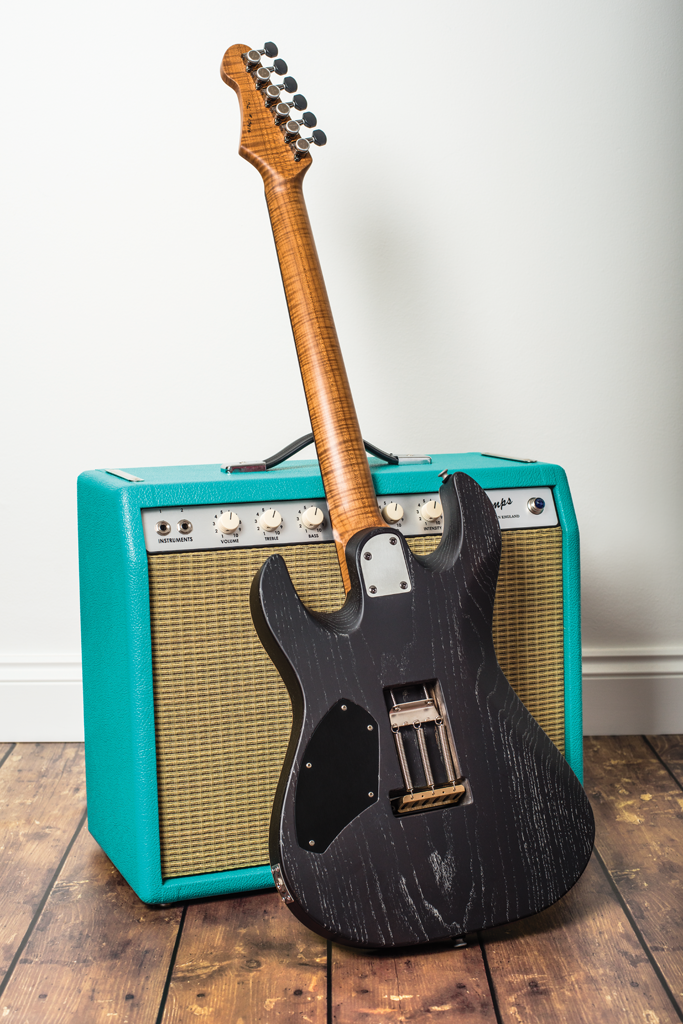 With a hotter-than-vintage output, there’s plenty of power under the Mojo bridge humbucker’s brushed cover, but crucially there’s character too. Into a hot tweed amp with a decent amount of volume, we end up spending more time than is decent lost in chewy Americana riffs and chords. If you think a drop-top hot-rod S-type can’t do roots with authenticity you are sorely mistaken.

It’s louder and more raucous than our trusty Gibson ES-335’s bridge unit – also wound by Mojo – pushing our amp into overdrive much more quickly but not unmusically so. And while many guitar makers boast that rolling back the volume yields usable cleans, the 96 actually delivers in this regard, retaining treble and jangle in a highly usable way. When we unscrew the back panel, it’s no surprise that there’s what appears to be a treble bleed circuit in situ on the volume pot. 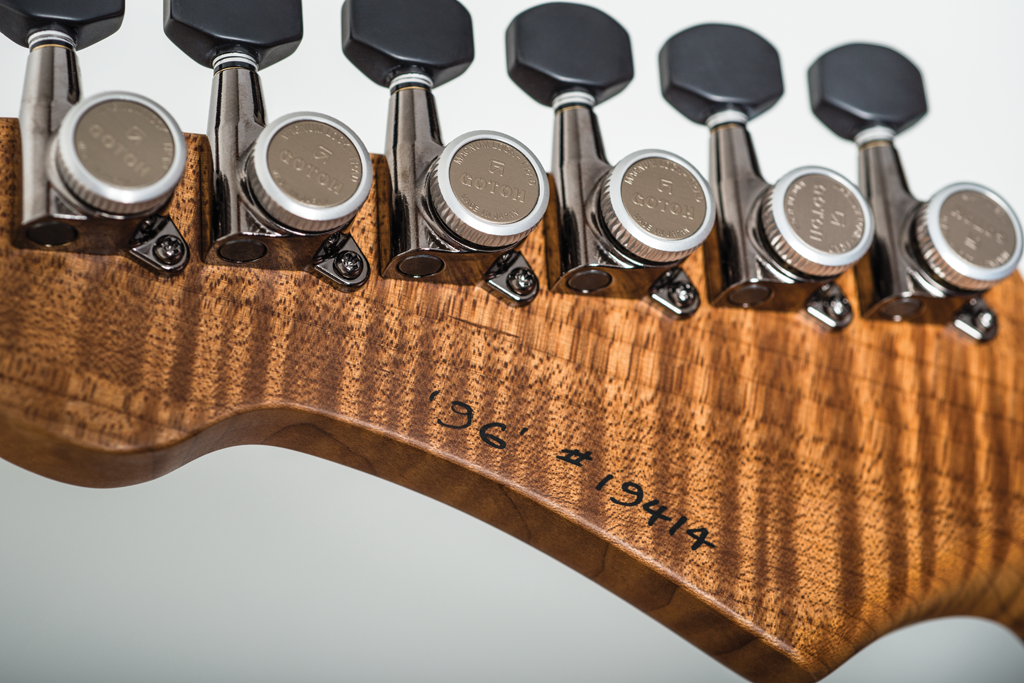 Up the gain to hard and heavy alt.rock levels and the 96 stays free of unwanted microphony, but provides a suitably robust voice for filthy rhythms, singing lead and chuggy palm-mutes. The single coils provide a bright, cutting and percussive array of Strat-type clean tones with explosive dynamics and no hint of mud, while the pull-push tone control offers yet more variation with its stealthy bridge pickup coil-split.

Overall, the 96’s single-coil voices have a sonic signature that pushes us towards the funkier end of the S-type spectrum, and although there are some cool blues tones to be had when you boost the mids, they lean closer to slick and suited than they do to down and dirty. 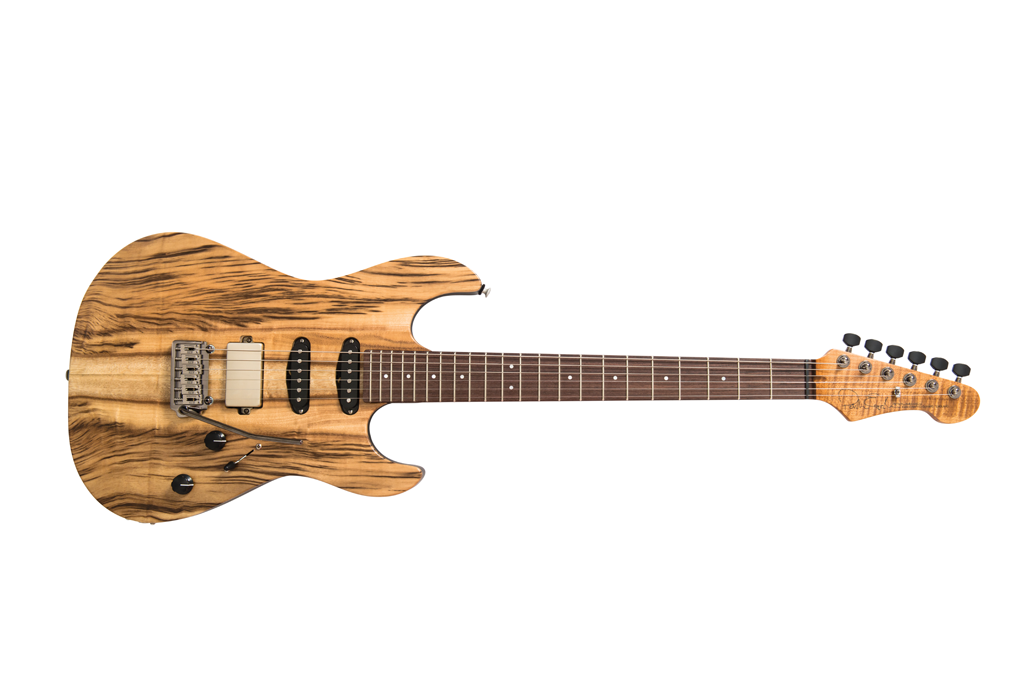 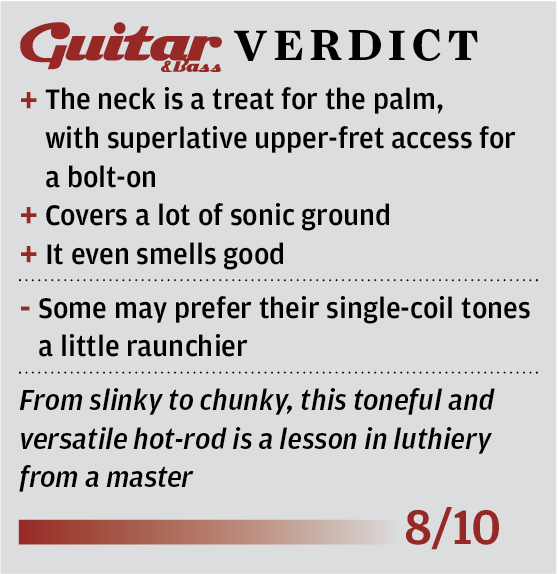