Affordable, American and original – is the Vela PRS’s coolest ever electric? 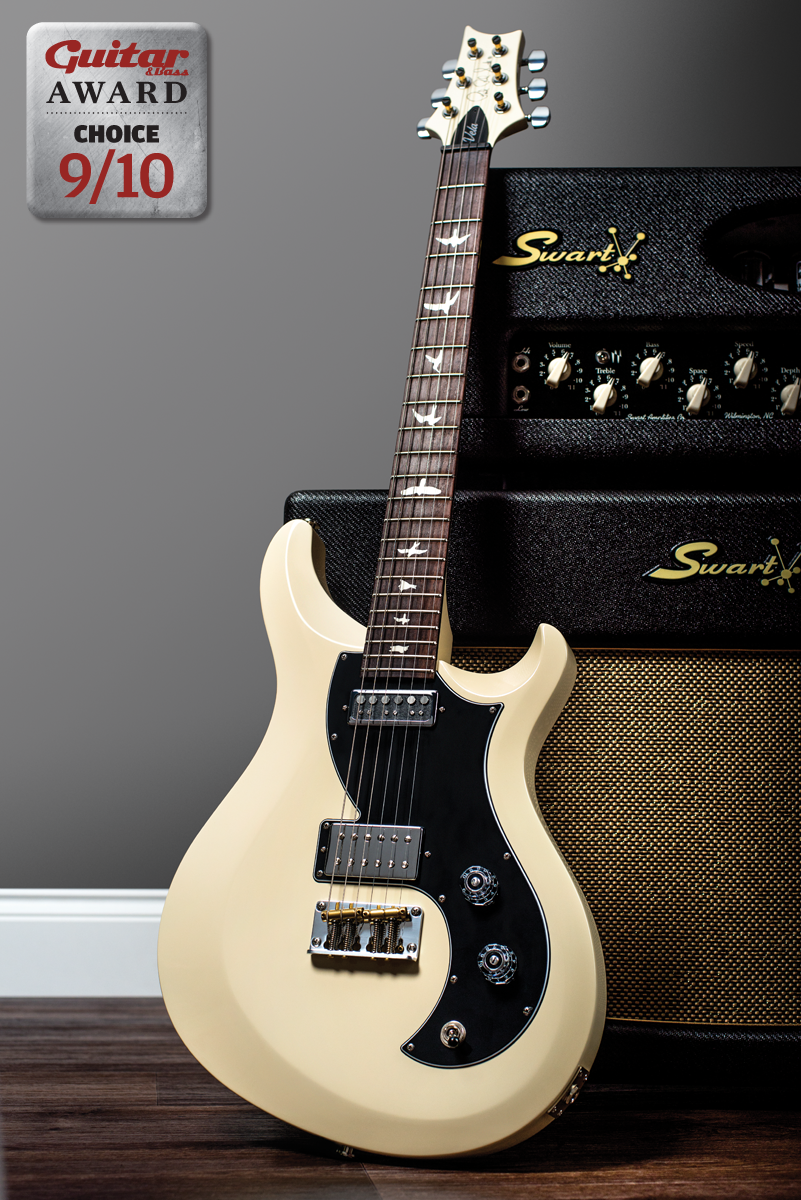 Launched in 2013, the S2 project was PRS’s answer to the affordable American-made electric guitar conundrum. In order for PRS to deliver more wallet-friendly USA instruments, all S2 models are manufactured in the same Stevensville, Maryland factory as the company’s higher-priced ‘Core’ models but on a separate, faster production line using a mixture of USA and offshore hardware and pickups.

The Vela – also the Latin word for a ship’s sails, the Spanish word for wakefulness and the name of a constellation in the southern sky – is the latest addition to the S2 family.
Though it contains instruments that possess more traditional PRS appointments, such as the Singlecut, Custom 22 and Custom 24, the S2 line is also home to PRS’s most overtly retro-influenced guitars, the Mira and Starla.

The Vela arrives with similar styling cues to the latter pair, but has the distinction of being the first S2 design not to have appeared previously elsewhere in the company’s catalogue. Another first: it’s also PRS’s offset body debut, featuring a silhouette created by cutting a Custom outline in half, shifting the bass side forwards and redrawing the lines. 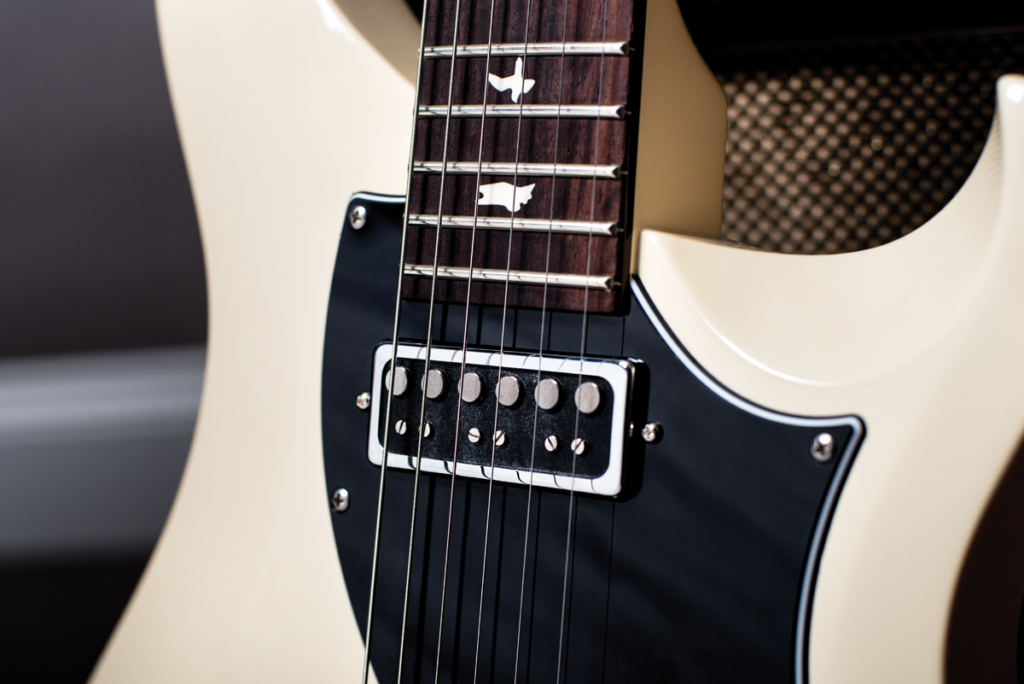 The Type-D neck pickup is unique to the Vela
In combination with the scratchplate shape, there’s a knowing nod to pawnshop, indie-rock aesthetics here, as PRS chases a generation of players to whom heavily figured maple tops and boutique pricing are perceived to be unappealing.

This is further emphasised by electronics that lean similarly towards the leftfield; the Vela borrows the Starla’s treble humbucker and flips it around so the slug coil is closest to the bridge and brings an entirely new pickup to the party in the bass position: the DeArmond Dynasonic-influenced Type-D single coil.

A new design for a new demographic it may be, but of course the Vela still owes plenty to the company’s richly innovative history.

The optional bird inlays here – which first appeared on the instrument that Smith built for Peter Frampton in 1976 – are just one example; the twin brass saddles on the Vela’s ‘Plate-Style’ bridge echo the design that Smith developed for the Sorcerer’s Apprentice guitar from 1982, on his way to perfecting the Stoptail that first became available in 1991.
Here in 2015, the two-saddle concept, as utilised on the Vela, appears in a more Fender-like configuration, with a pair of Telecaster-style brass rods handling three strings per side.
The saddles are perched on a reassuringly chunky nickel-plated aluminium base that resembles a hardtail Strat bridge, but the Vela isn’t strung through-body; the ball-ends of the strings reside in a shallow cavity beneath individual cut-outs in the base plate. 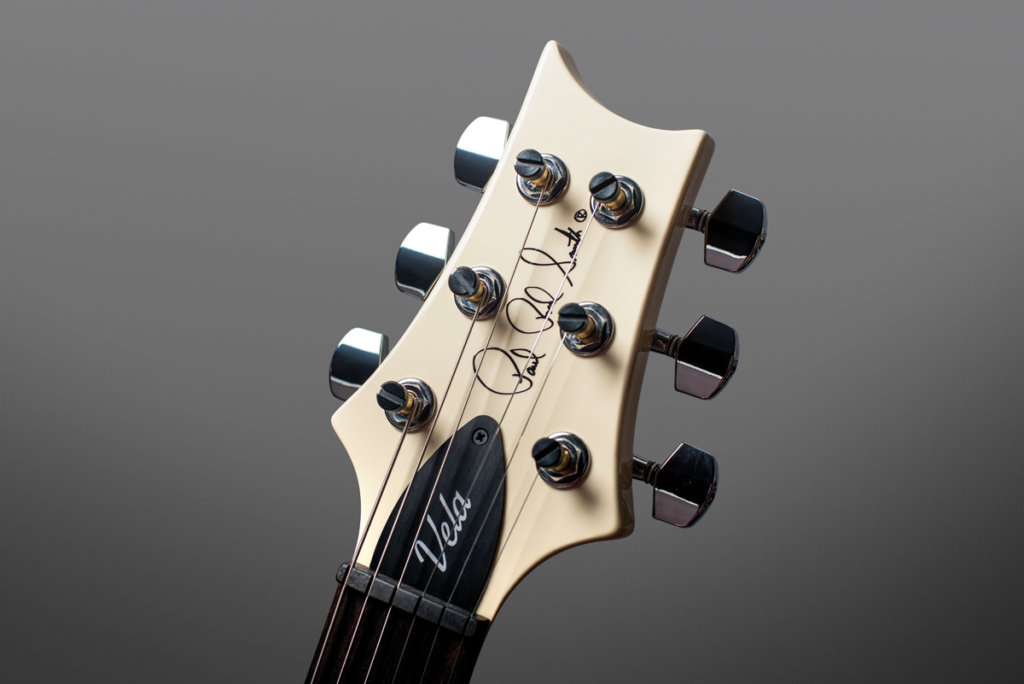 The Vela’s body is a new, offset shape, but its headstock is familiar
In practice, this pseudo-toploader design gives the string a relatively steep break angle over the saddles, meaning there’s still plenty of tension – the feel down at the bridge is taut with a Telecaster-like snap.

The saddles are screw-adjustable, both for height and intonation, and although a six-saddle assembly would theoretically offer more precision, at no point was the Vela found wanting on either the intonation or tuning stability fronts during our testing.

Though appearances and the production line differ from the company’s Core instruments, the Vela’s feel has USA PRS running through it like a stick of Maryland rock. The comfortable, rounded C profile of the Pattern Regular neck is based on the carve of regular PRS necks of the late 1980s, while its 10-inch ’board radius, familiar fretwire and 25-inch scale length all add up to deliver the kind of highly-evolved, player-friendly experience on which Smith has built his empire to date. 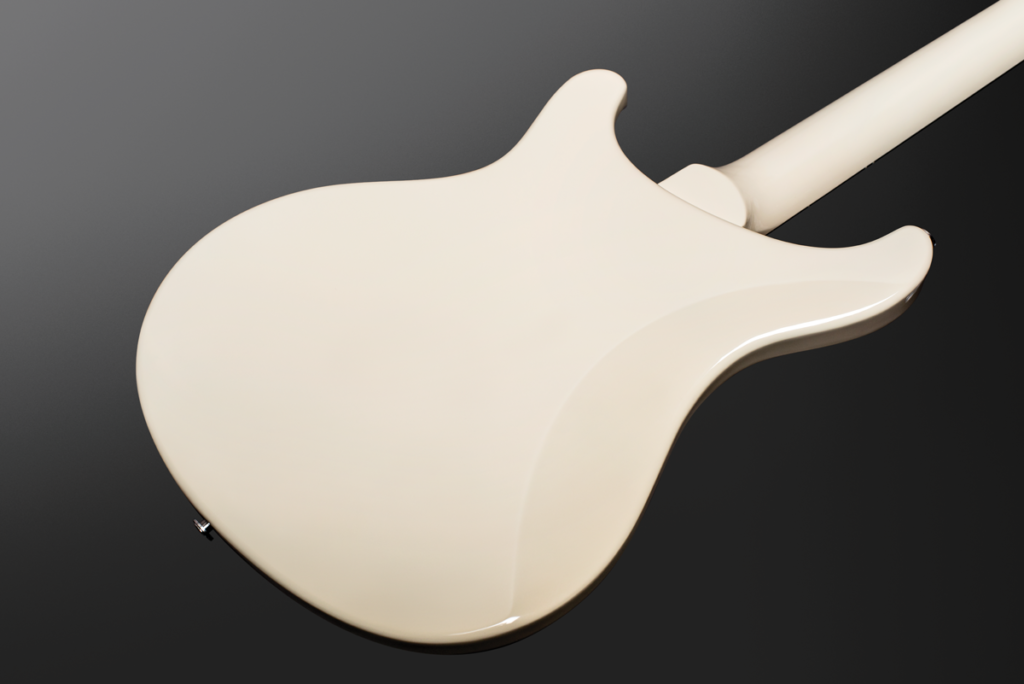 The Vela’s sleek contours are player-friendly
The offset design gives the Vela a compact feel, whether standing or seated, and it balances superbly when strapped on, with a light weight that ought to make lengthy performances a breeze in comparison to many other mahogany-bodied electrics. In short, there’s nothing here that gets in the way of the important matter at hand: making music.

In Use
Played clean, the Starla Treble humbucker has a Gretsch-like accent; when compared directly to a Filter’Tron, there’s not quite as much innate growl or harmonic complexity in the lower midrange, but you certainly benefit from a similarly appealing treble attack.
Sweeter and less brash than a PAF, it’s a great clean tone with bags of dynamic range under the fingers that can be sweet or explosive depending on the ferocity of your right hand. Clean chords are sumptuous, too: chimey and present, inflicting nowhere near as much of the ear fatigue that a traditional bridge humbucker can induce in this context.

Moving into crunch territory, where a PAF-style ’bucker in an all-mahogany instrument can crowd the midrange, the Vela leaves more space, while remaining authoritative – it’s a boon for recording, and whether you use that space for effects or overdubs is up to you.
While the bridge humbucker mode covers several decades of rock ’n’ roll raunch, from

Sticky Fingers to modern indie, if you need more airy jangle and a little less grit, simply pull the tone pot – it’s a great voice for 60s-influenced power-pop that never gets too brittle thanks to the natural midrange push of mahogany. 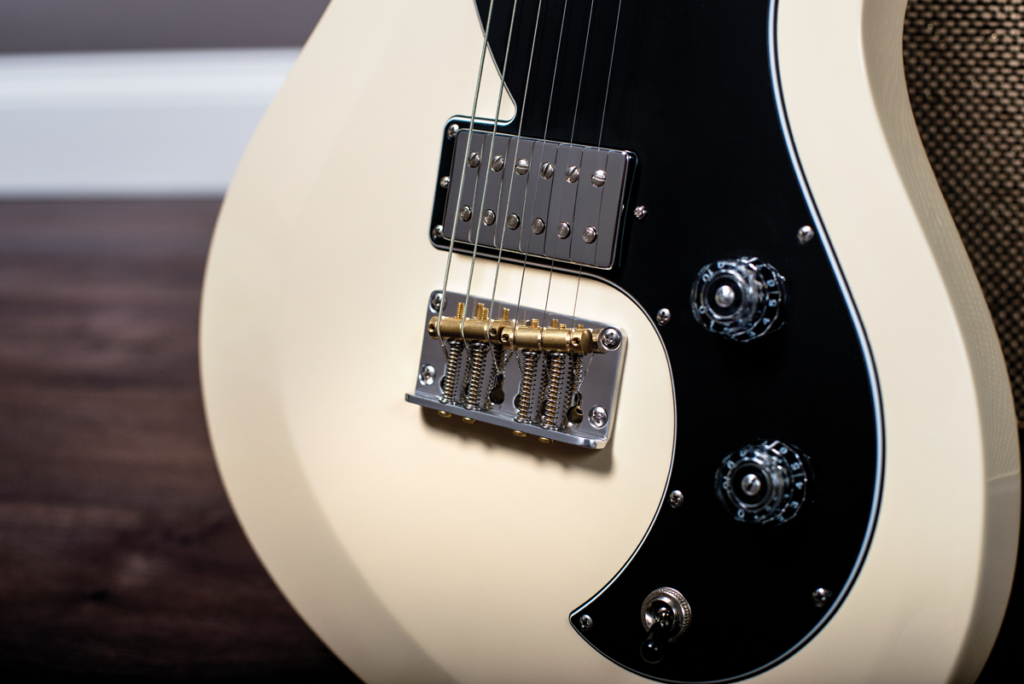 The bridge is also new, but its lineage dates back to the early 1980s
Flipping from the bridge pickup in full humbucking mode to the Type-D single coil in the neck position, there’s a noticeable drop in output, though the balance can be remedied by raising the neck pickup’s height a little from its factory position.

The Dynasonic influence is there, but with more balance; it’s less of a junkyard dog straining at the leash and instead provides a more neutral canvas for expression. PRS’s Jim Cullen describes the Type-D as a cross between a ’54 Strat and a DeArmond, commenting that “a lot of neck pickups can be muddy.

We wanted it to be clear as a sunny day and take pedals well.” While we’re inclined to agree, to our ears there’s also a hint of Teisco Gold Foil in the Type-D’s balance of clarity and smoothness – it’s a sound that’s in vogue right now, and for good reason: it’s a wonderful voice for reverb-drenched slide, heavily-effected atmospherics, fuzzy riffs, garage blues and much more.

The neck pickup in conjunction with the bridge in coil-split mode is yet another highly musical voice from a guitar that’s twangy, snappy and full of sass across the board but possesses plenty of girth when required, too.

Ultimately, cool is in the eye – and ear – of the beholder. Whether or not the Vela proves to be a hit with a younger crowd, this is a serious guitar for sensible money with a juicy array of tones. If the birds are too flash for you, save yourself the cost of a decent stompbox and go for the dot neck version; it might just become a cult classic.

Want to be in with a chance of winning our PRS Vela review guitar? Pick up a copy of the August issue of G&B and complete our Reader Survey. 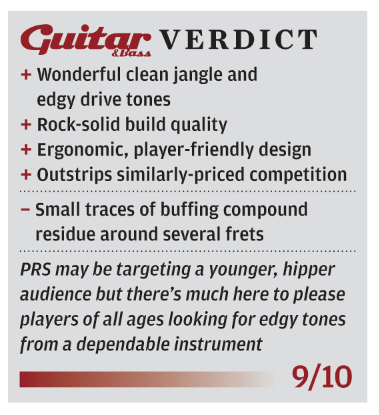