The pride of Northern Irish guitar-making moves into new sonic territory with an exotic combination of timbers. 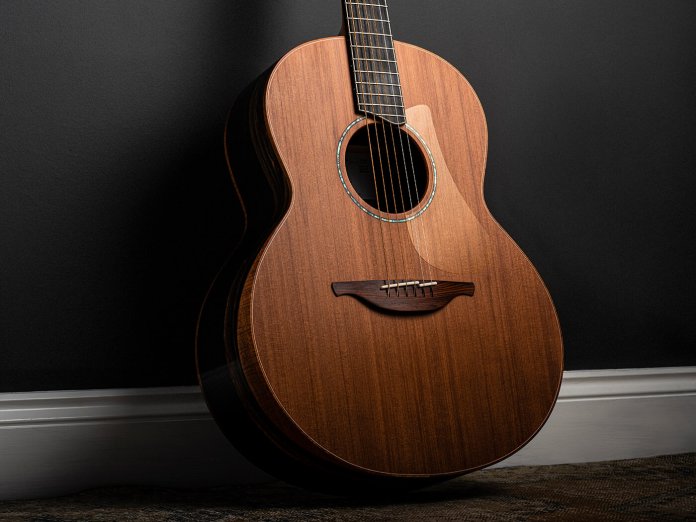 Many describe the past three decades as a golden age of acoustic-guitar production. The fruitful period has been characterised not only by the evolution of the instrument’s quality of timbre and response but by the exploration of alternative tonewoods by luthiers and players alike.

About 15 years ago, it was fashionable among custom-guitar buyers to opt for eye-catching woods, possibly just for the sake of it. This led luthiers to explore some unlikely combinations for back and sides and soundboard materials. Some proved to be sonic dead ends but, in the hands of skilled luthiers, the visually impactful duet of heavily figured ebony and striped sinker redwood (often bound in equally exotic cocobolo or snakewood) revealed an overtone-laden and expressive voice with an often astonishing capacity for sustain. 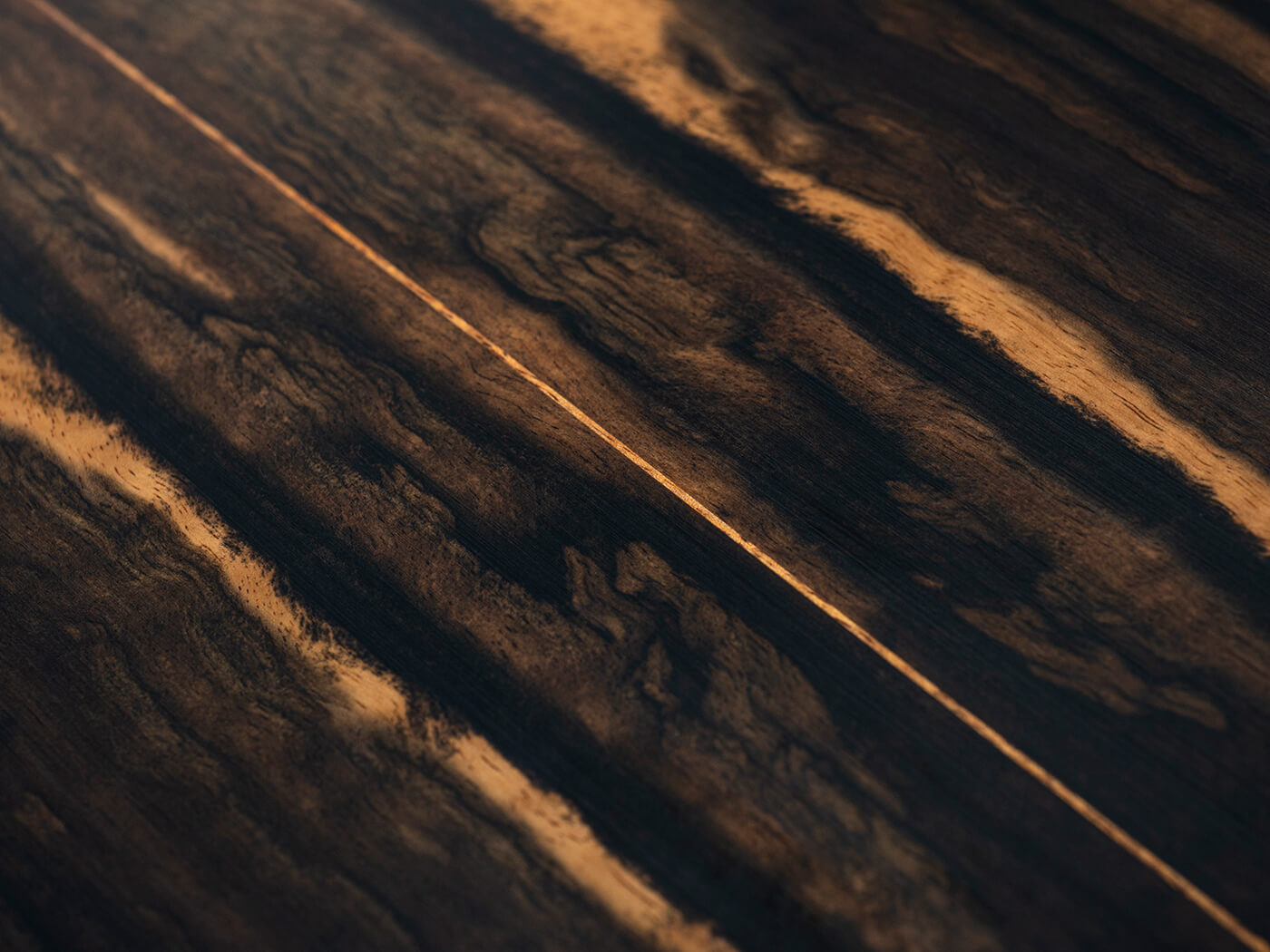 New for 2020, County Down-based Lowden is offering this fabled wood combination on its equally fabled 35 Series. Here we have the F model, replete with an outrageous set of AAAA-grade black and white ebony, tastefully bound with Tasmanian blackwood and topped off, literally, with sinker redwood. The aesthetic is typically understated, with Lowden’s elegant sense of line and beautifully applied satin finish lending grace and dignity to a wood combination that can often be something of a retinal vuvuzela.

An established all-rounder, the F model is built around a 650mm scale length with a 402mm lower bout, and Lowden has softened the 120mm body depth with a Kevin Ryan-style forearm bevel. The choice of materials means the guitar is weighty in comparison to rosewood and mahogany instruments but it’s comfortable on the lap nonetheless. If weight is an issue for you, be advised that this guitar comes with a beautifully made custom Ameritage case that weighs in at almost 6kg on its own.

The neck is standard Lowden: five-piece laminated mahogany, rosewood and walnut construction topped with gold Gotoh 510 machine heads. The front and back of the graceful headstock are overlaid in ebony, as is the heel. It goes against this reviewer’s sense of line, however, to see a heel cap end some 4mm shy of the back of the guitar, barely overlapping the back binding. 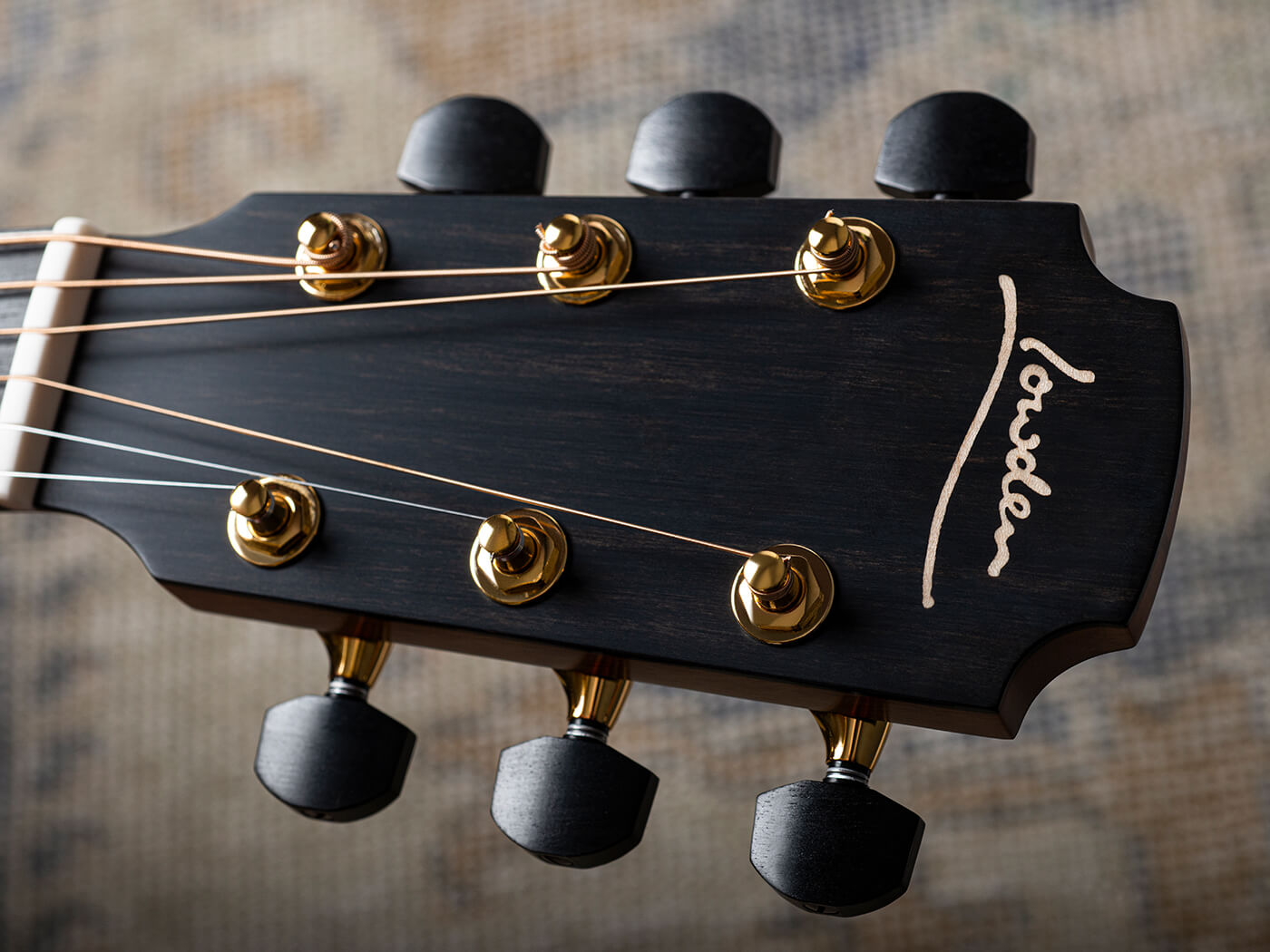 The neck itself is an absolute joy for both fingerstyle and flatpicking players, with an expertly shaped C carve and exceptional fretwork along the length of the ’board. The ebony fingerboard – unadorned aside from a tasteful line of sycamore – might go from smooth to sublime were it given another round of buffing.

The string spacing at the nut and saddle is well judged for all styles and the all-important spacing between the outer strings and outside edge of the fingerboard means it’s possible to complete vibrato and bends without slipping off the neck. 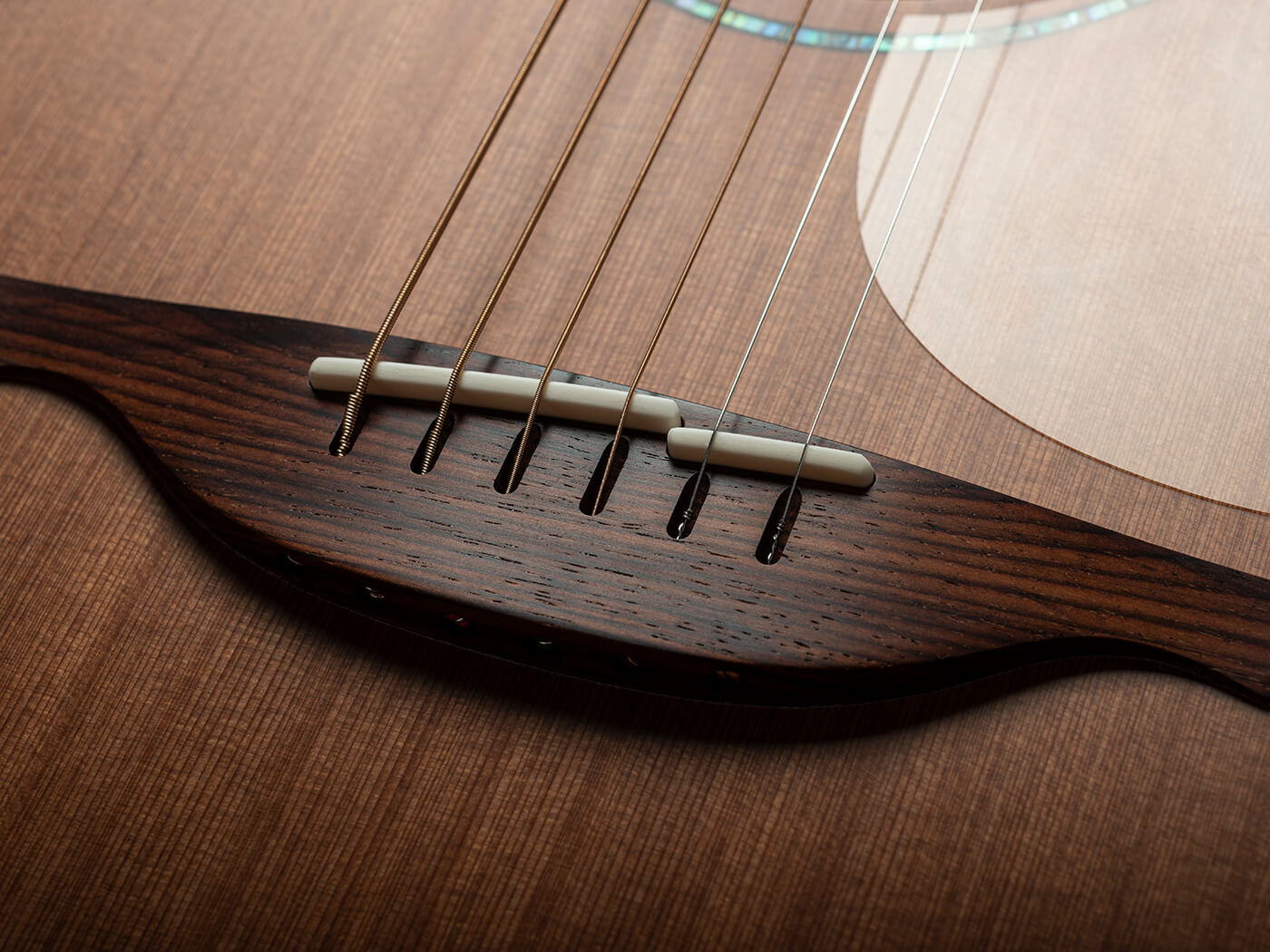 Sinker redwood takes its name from the log itself, which spent more than a century at the bottom of a Californian river, collecting silt from the mineral-rich water. Sinker redwood’s vitreous nature can make for an extremely fast initial response but can also make instruments exceptionally sensitive to high-frequency noises, such as string and finger squeaks. This is certainly the case here, and it encourages the player to focus on accuracy, timbre and quality of attack.

It’s characteristic of good sinker-redwood tops to lend a distinct bloom to each note, meaning they require barely a touch of vibrato to bring them to a sustaining high overtone. It’s akin to playing an electric guitar on the cusp of harmonic feedback, and here it’s particularly present on the wound strings and can be exceedingly expressive. The bass response is present but not overwhelming – but that’s to be expected given the slight closing off of the soundboard that’s an inevitable sacrifice when incorporating an arm-bevel design of this nature. 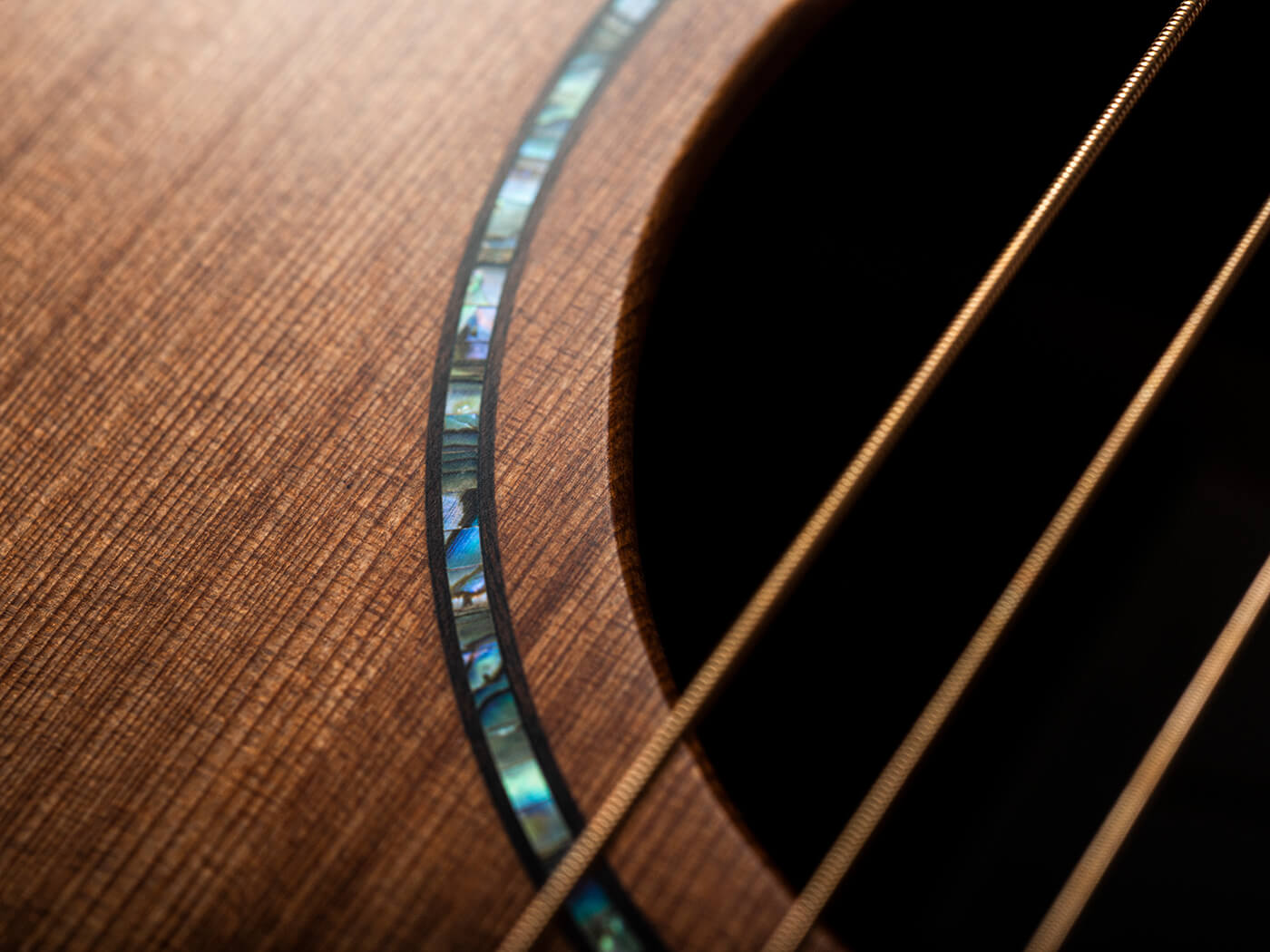 This F-35 sounds full and rich even when played gently with bare fingers. Although a delicate redwood soundboard would not be our first choice for heavy strumming, the clear scratchplate provides some protection and, when digging in with a pick, another of the more readily identifiable aspects of redwood instruments comes into its own: no matter how heavy your attack, the guitar’s voice remains clear and precise. Rather like using a limiter in the studio, there’s a point at which the output won’t increase no matter how hard you wail on the thing. All these characteristics add up to a clear-voiced and articulate instrument that excels when you give it some room to breathe.

Wildly figured ebony has been a popular choice for the back and sides of luthier-built guitars for many years and its present fundamental characteristics provide the perfect backdrop for the high upper-partial content of the soundboard. The carved rosewood bridge, although something of an aesthetic mismatch given the abundance of ebony on this model, doubtless adds another dimension to the sound. 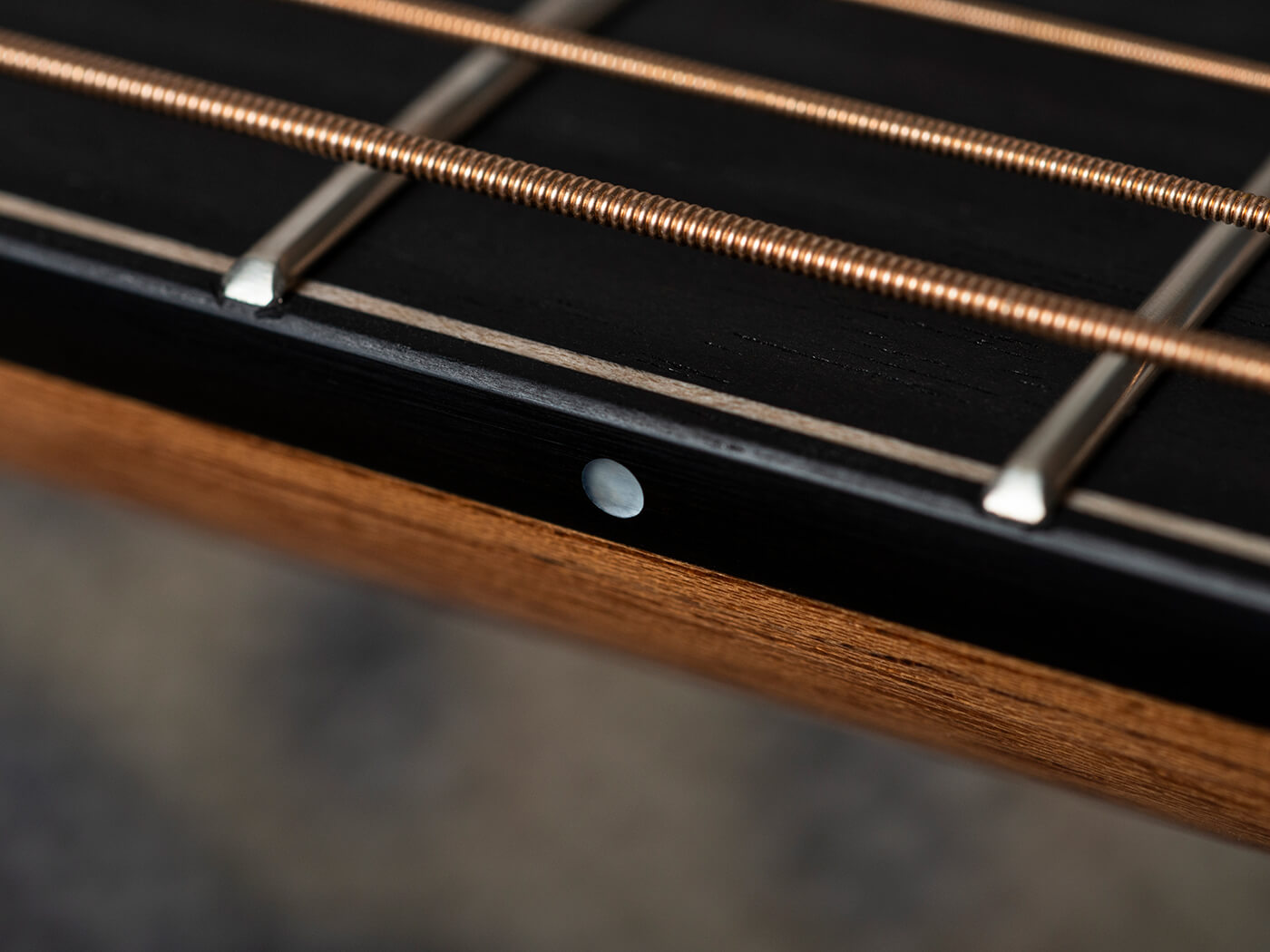 In standard tuning, the rich overtone content brings shimmer and sparkle to chord work and single-note lines. Things get a little raw closer to the neck join but this is a brand-new instrument and you can expect it to mellow as the wood gets used to its new job as a guitar.

Open and altered tunings are arguably the natural habitat of Lowden instruments and this F-35 immediately springs to life in DADGAD and CGDGCD, where it’s especially impressive. The distinctive Lowden sound may be most closely associated with spruce and cedar but this novel combination of ebony and sinker redwood has unlocked in the maker a bevy of beautiful new textures. 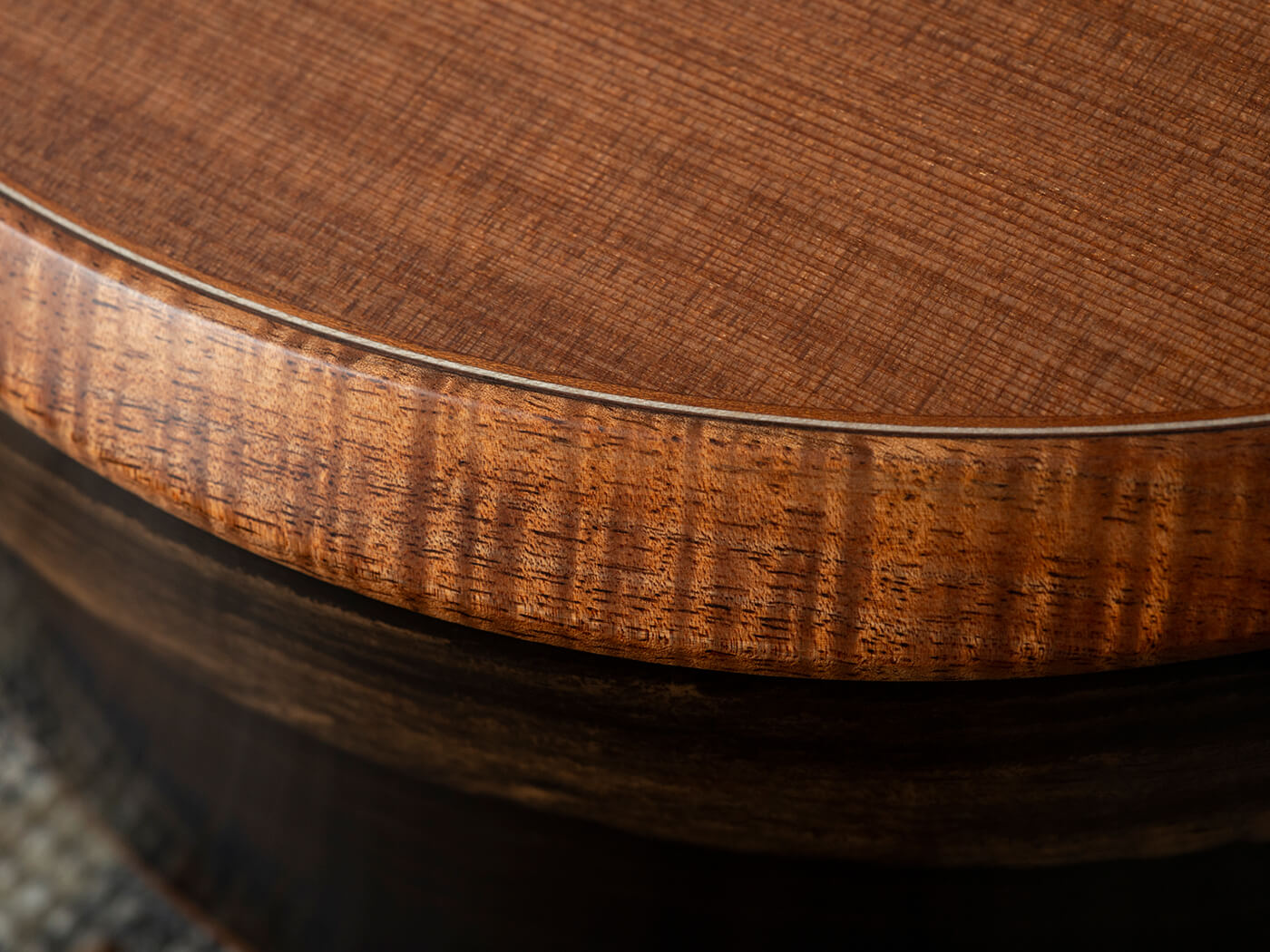