Mystery surrounds the exact identity of this beautiful Gibson archtop, which shares elements of both the ES-350T and Byrdland. 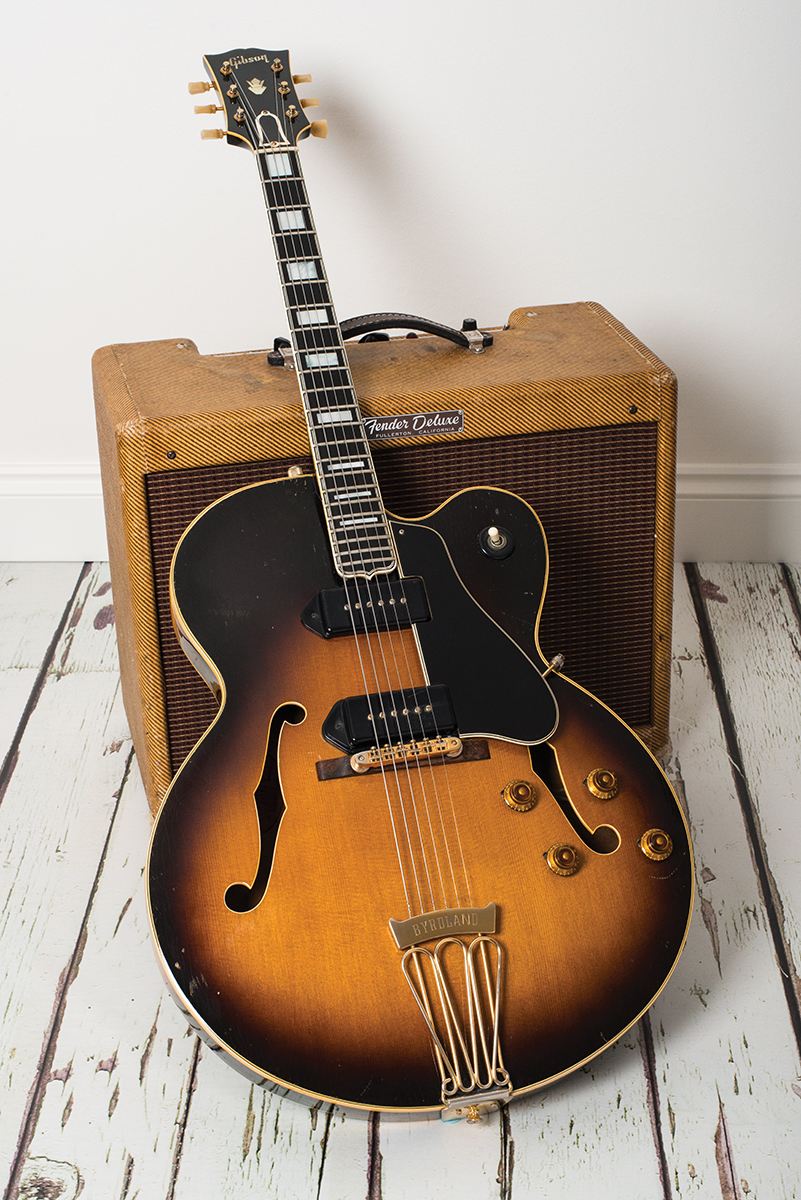 The starting point for this Vintage Bench Test is a bit of a first because nobody, including myself, is entirely certain what this guitar is. My first impression is that it started life as a 1956 Gibson ES-350T that somehow ended up with a Byrdland fingerboard and tailpiece. So how can we be certain that it’s one thing and not another?

The weight of evidence supports the ES-350T theory, so let’s start with the orange label under the bass-side f-hole. It appears original and ‘ES-350’ is handwritten in the Style column. Beneath that, there’s a ‘GUITAR’ stamp followed by a stylised ‘T’ for Thinline and a serial number that corresponds with a manufacturing date of 1956. The FON has a ’56 letter, too. A 2.25-inch deep body became standard in 1956 when production of the full-depth ES-350 ceased. 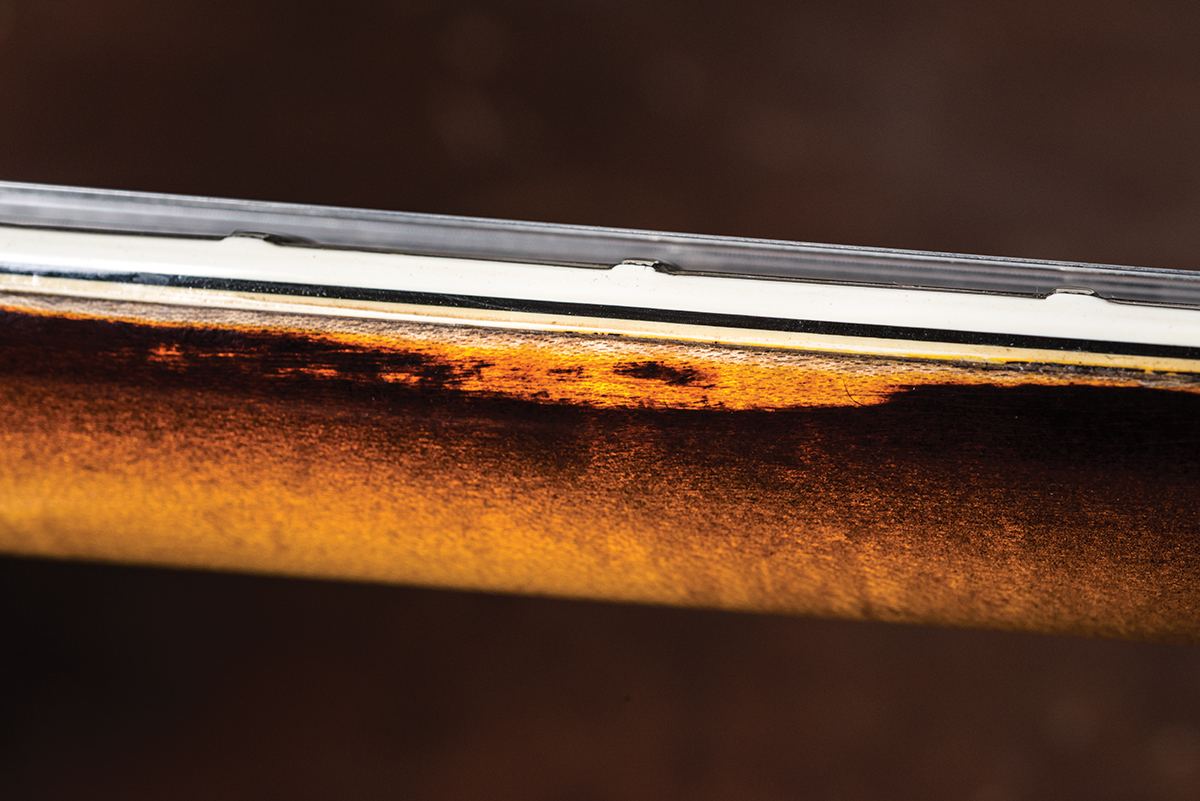 The low frets were a feature on mid-50s Gibson jazz guitars, so these probably aren’t as worn as they might appear

Both the ES-350T and Byrdland models had the rounded Venetian cutaway in 1956, but the Byrdland looked much fancier. Like the ES-350T, it had three-ply binding on the back, but the front binding was seven-ply. This guitar has three-ply front and back. ES-350Ts were also fitted with pickguards that were black celluloid rather than tortoiseshell. So everything about this body corresponds to a regular ES-350T, except the top.

The ES-350T had a laminated maple top rather than the Byrdland’s carved solid spruce, and although this ES-350T is a rare example with a spruce top, it is actually laminated rather than solid. 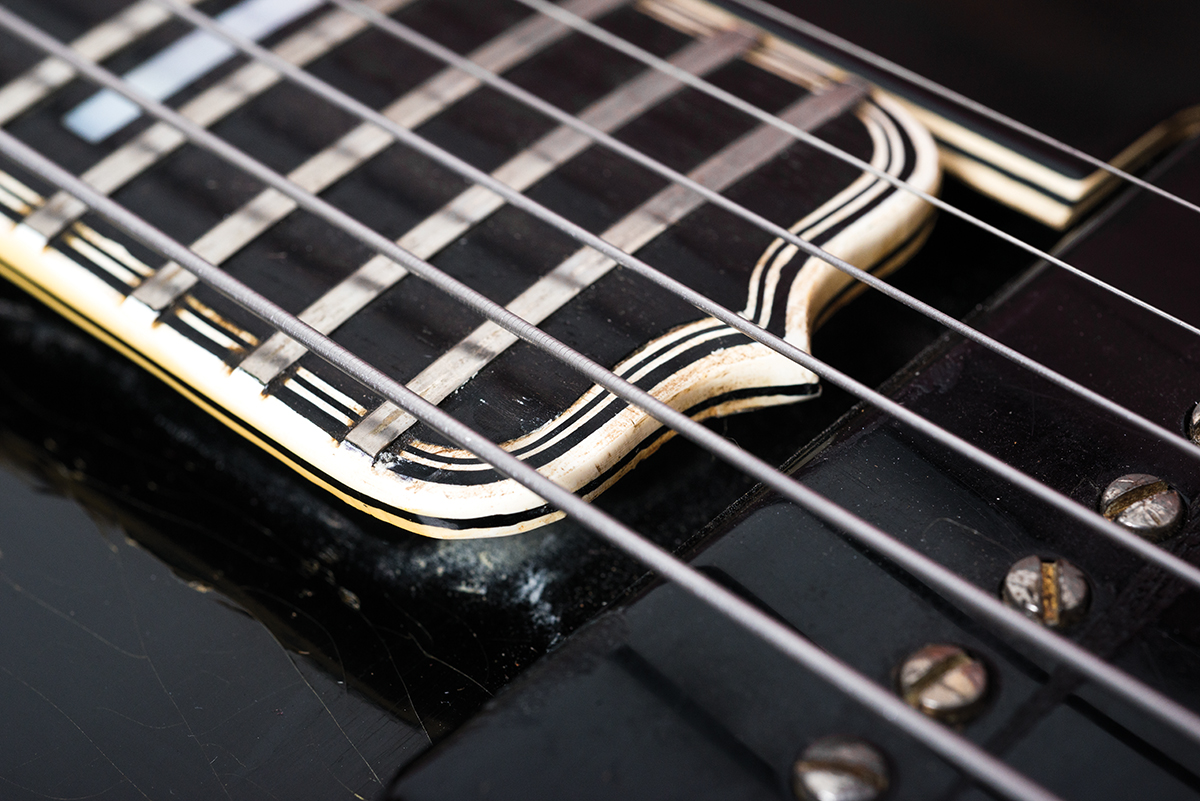 The multiple binding and ‘widow’s peak’ indicate that this is a Byrdland fingerboard, and it’s most likely a later addition

The main point of contention is the neck. Both models had the short 23.5-inch scale length, but the fingerboards looked very different. The ES-350T’s rosewood board had single-ply binding with split parallelogram markers, but the Byrdland’s ebony ’board had block markers and five-ply binding with a ‘widow’s peak’ decoration at the pickup end. The binding differences were the same around the headstock, and the ES-350T had a crown inlay rather than the jazzier flowerpot inlay of the Byrdland.

So this is almost certainly an ES-350T neck with a Byrdland fingerboard. The neck shows no signs of having been removed from the body, but there is finish chipping all along the join line between the fingerboard binding and neck, and those areas are the only parts on this guitar that don’t black light.

The body and headstock binding also look much yellower than the fingerboard binding – even in areas where the lacquer hasn’t worn away. My best guess is the fingerboard was retrofitted, either as a cosmetic ‘upgrade’ or to replace a worn-out or damaged original ’board. 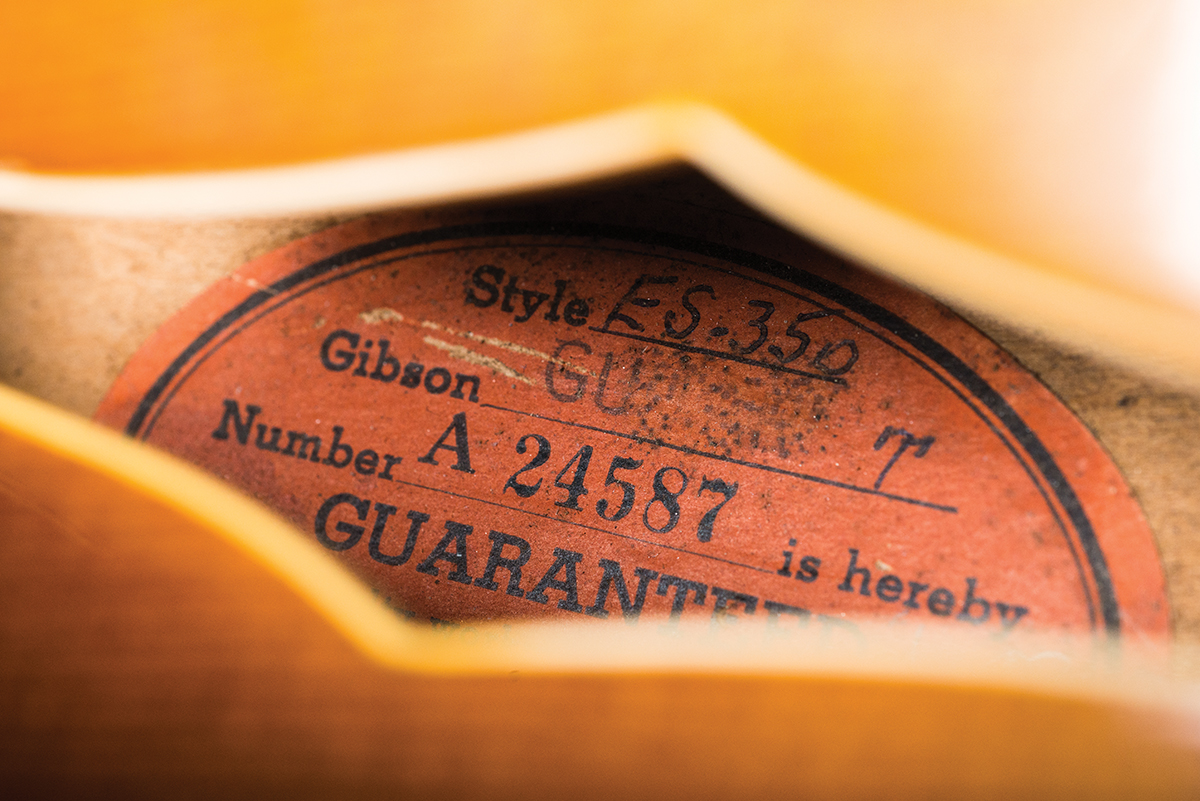 The orange label is present and correct, dating the guitar to 1956

A competent luthier could have done this quite easily without even removing the neck, and this Byrdland tailpiece may have been added at the same time. There are no added holes to accommodate it, but one of the tailpiece screws entered the body at a fairly jaunty angle, which suggests some degree of ‘force fitting’.

You could probably cover the cost of a replacement ES-350T tailpiece by selling this old Byrdland unit. Then again, Fretted Americana is selling a natural finish spruce-topped ’56 ES-350T for $19,500, and that appears to be fitted with a Byrdland tailpiece too. So maybe it’s original after all. 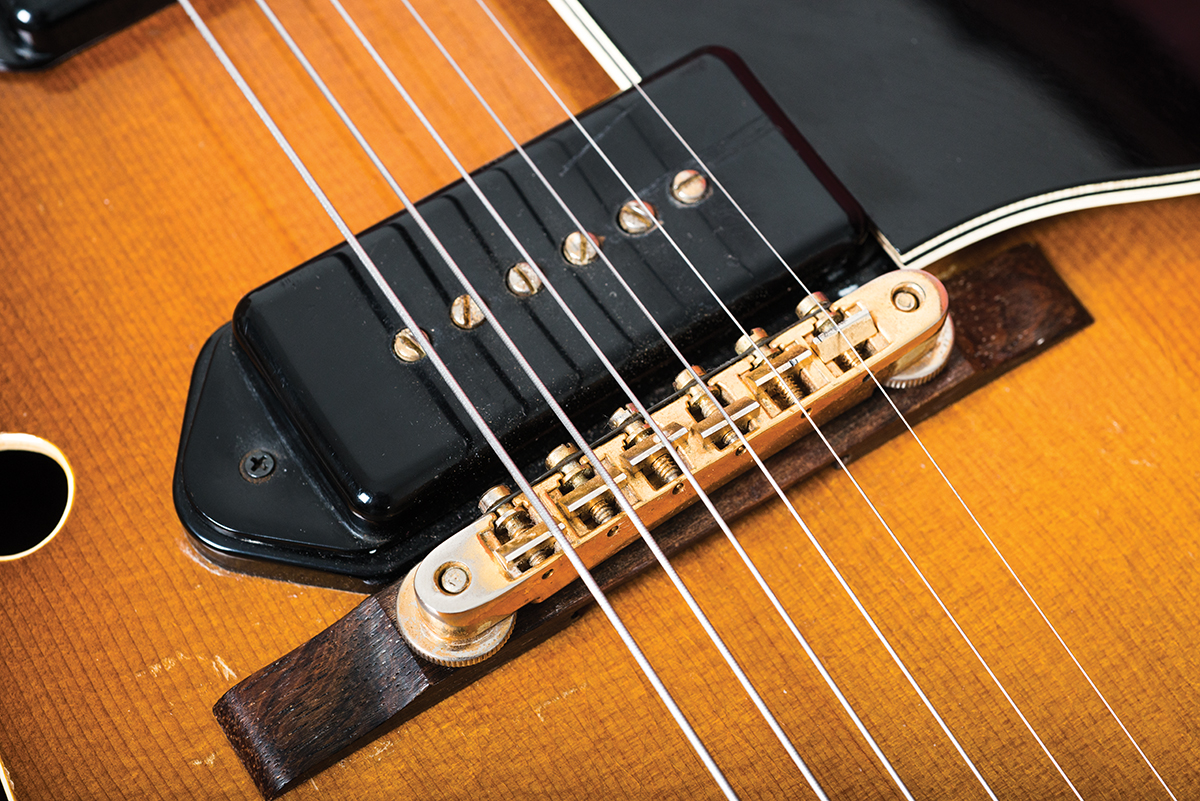 The retaining wire and casting marks on the base indicate this bridge is much younger than the guitar. Look closely and you can see traces of gold plating on the pickup screws. The P-90s appear to be the real deal and they’re originals, too

Byrdlands had fancy Sealfast tuners, but ES-350Ts had Klusons. This guitar has the latter and, what’s more, they carry the single-line and Patent Applied number stamps, which places them in a late ’56 to late ’58 timeframe. They also have the single-ring tulip buttons, and they’re the only style of tuners that have ever been fitted to this neck.

Although the Tune-o-matic bridge appears to be mounted on a nice Brazilian rosewood base, it’s fitted with a retainer wire, and on the underside there’s a Gibson patent number stamp and a foundry mark. So it’s an ABR-1 in shape and size, but was probably made some time between 1966 and the early 1970s. 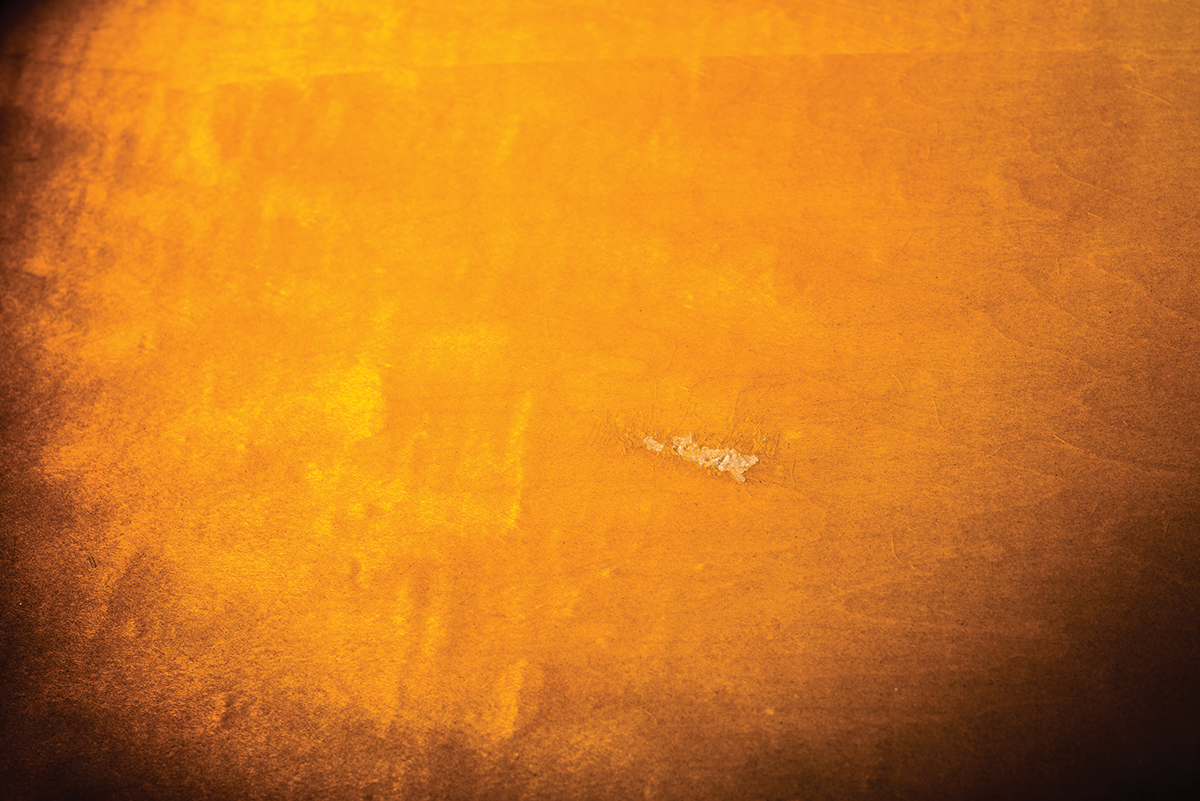 I lifted the covers from one of the pickups and it became clear that P-90s are the only pickups that have ever been on this guitar. These ones look very old, but there are slight traces of gold plating left on some of the screws. The rubber switch grommet probably isn’t original because research suggests they began appearing around 1960 on the humbucker models. The switch tip looks like a replacement, too. The white plastic strap buttons have been replaced, with a Gretsch button added to the upper bout. 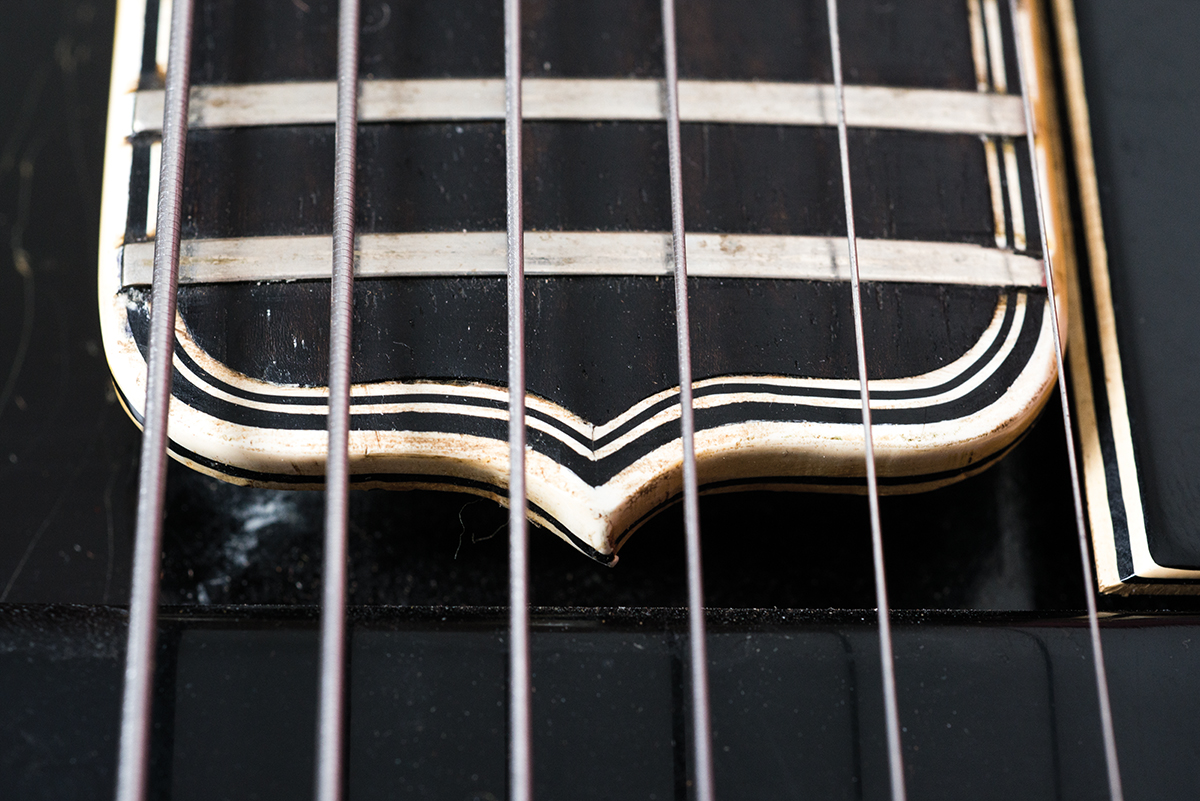 Overall, the ES-350T is in decent but well-used condition. Besides the dings and dents, and a fair bit of lacquer checking, there is one long and highly visible side crack that runs from just past the pickguard bracket and stops just short of the jack socket.

The original case comes with the guitar, but it’s looking fairly sorry for itself. It’s probably repairable, but you could buy a 50s replacement, and at the time of writing there was a four-latch ‘Cali Girl’ 350T/Byrdland case on Reverb for £380.

The guitar arrived with flatwound strings but, much as I have tried, I just can’t get along with them. Some players sound great with flatwounds, but I’m no jazz guy and I find myself getting bored with the tone and feel after a short time. When I see an ES-350T, I’m inclined to think of Danny Gatton, so I wasted no time in putting on a set of pure nickel 11-gauge roundwounds and tweaking the bridge height and truss rod. 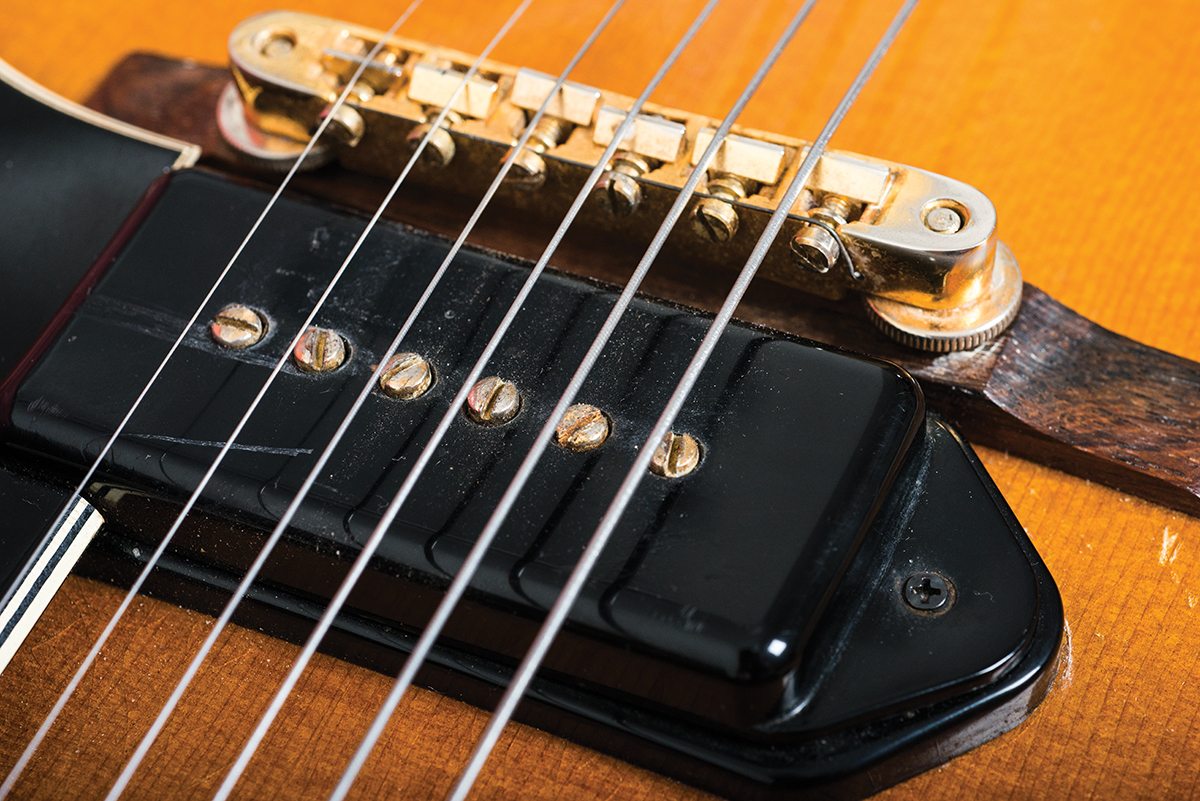 I don’t think my attitude to any guitar has ever moved from indifferent to besotted quite so quickly. Those flatwounds just didn’t drive the top properly. However, once the body started resonating, the ES-350T’s archtop pedigree came to the fore. It’s loud, smooth, mellow, dynamic, deep and surprisingly powerful. Then again, although it’s a thinline, it measures 17 inches across, so there’s a lot of space inside the box.

When I was finally able to stop playing long enough to plug in, the ES-350T just kept on giving. Single notes have extremely articulate definition and there’s way more substance and complexity to the tone when compared to an ES-330. There’s more sustain, too, but the ES-350T is quicker to feed back. 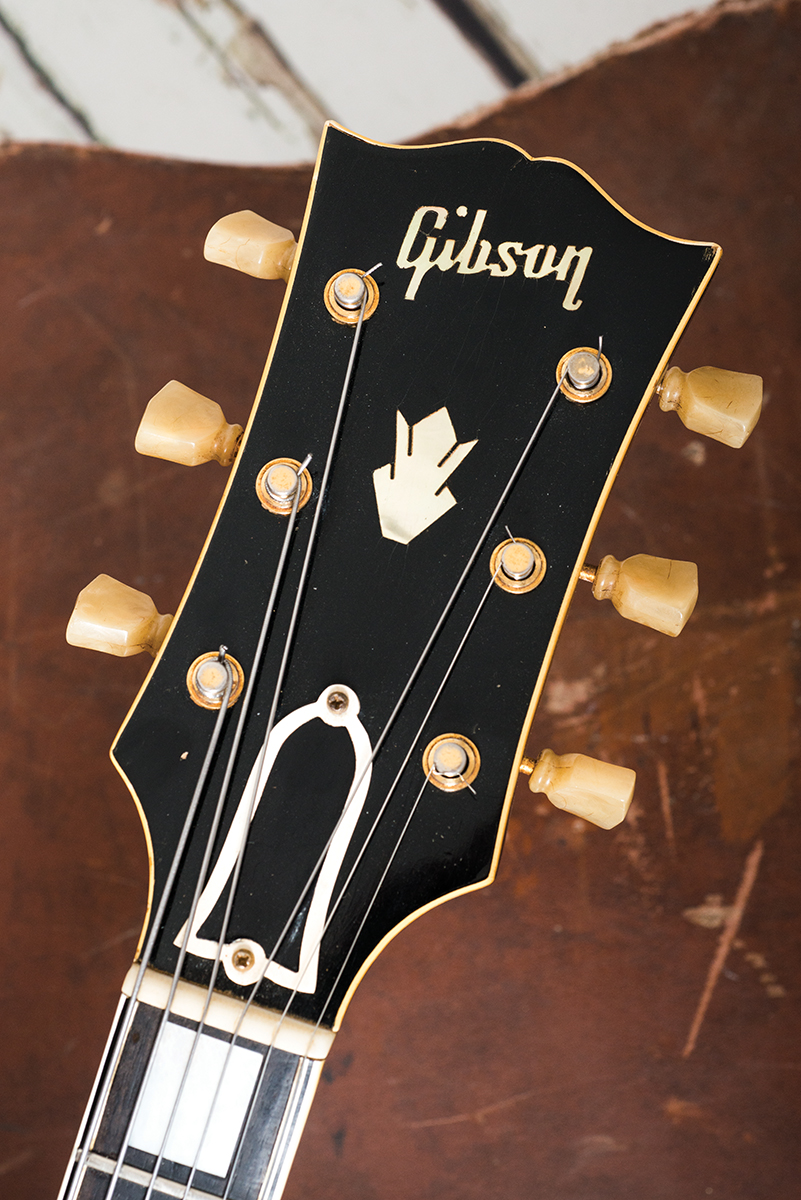 As you would expect on an ES-350T, the bound headstock has a ‘crown’ inlay

Each pickup has its distinct tone, but the big surprise was an out-of-phase centre setting. Instant T-Bone Walker fun ensued and I love the tone so much that I wouldn’t change a thing. It’s likely someone just flipped one of the P-90’s magnets, so it would be an easy fix for someone who felt differently.

As well as the old-school jazz tones, the ES-350T proved to be a consummate blues and R&B instrument, so it’s no wonder Chuck Berry used one to cut some of his greatest tracks. It’s so expressive and responsive to playing touch it’s a constant source of intrigue and inspiration. Add a touch of overdrive and fuzz, and you can even play fusion, but you’ll have to watch that feedback. 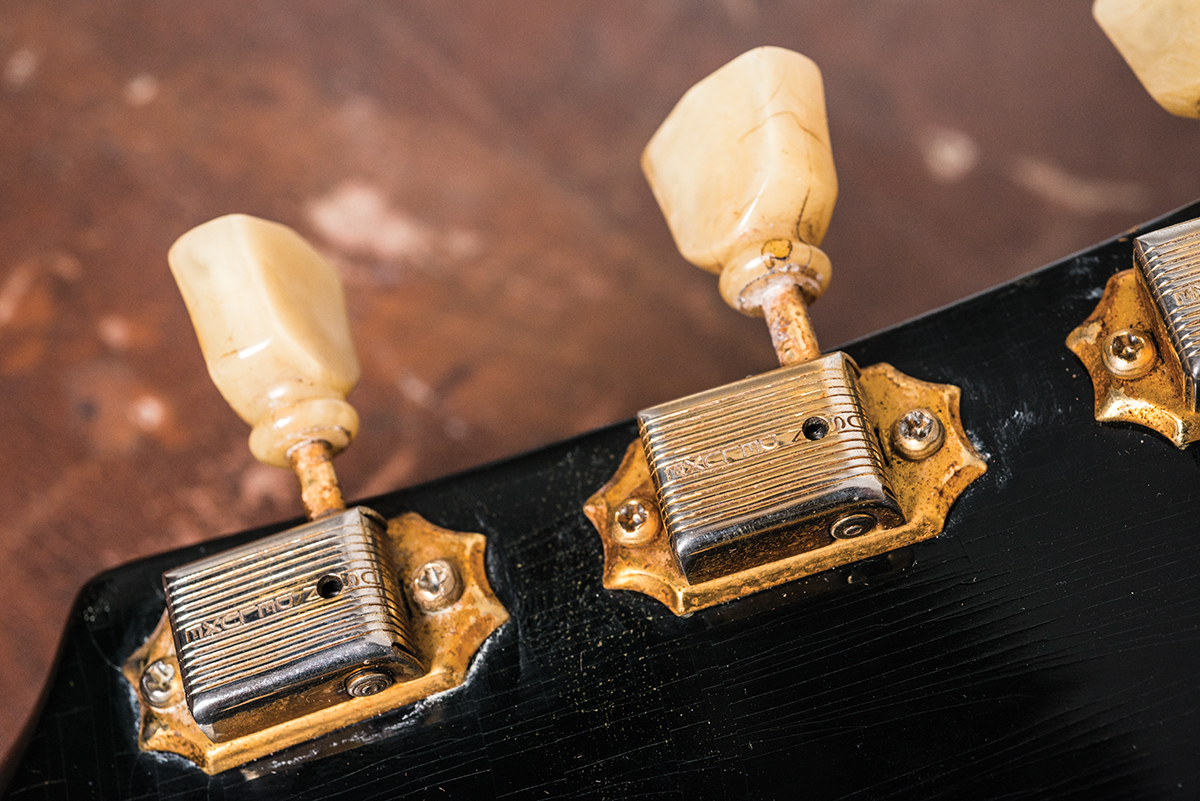 Besides the fingerboard, bridge and tailpiece swaps, and of course that side crack, there is something more fundamental that may limit this guitar’s appeal. The neck has depth, but the short scale combines with a very narrow fingerboard and string spacing and frets that are ultra-low, wide and flat. Jazz guitars of this era often had very low frets because string bending wasn’t ‘a thing’, and Gibson even called the Les Paul Custom a ‘fretless wonder’.

So, although these frets appear heavily worn, in reality they may not be substantially different from new. Given the changes already made, a refret would do no harm to the saleability or playability from a non-jazzer’s perspective. The guitar actually plays pretty well with the current frets and the short scale feels effortless. 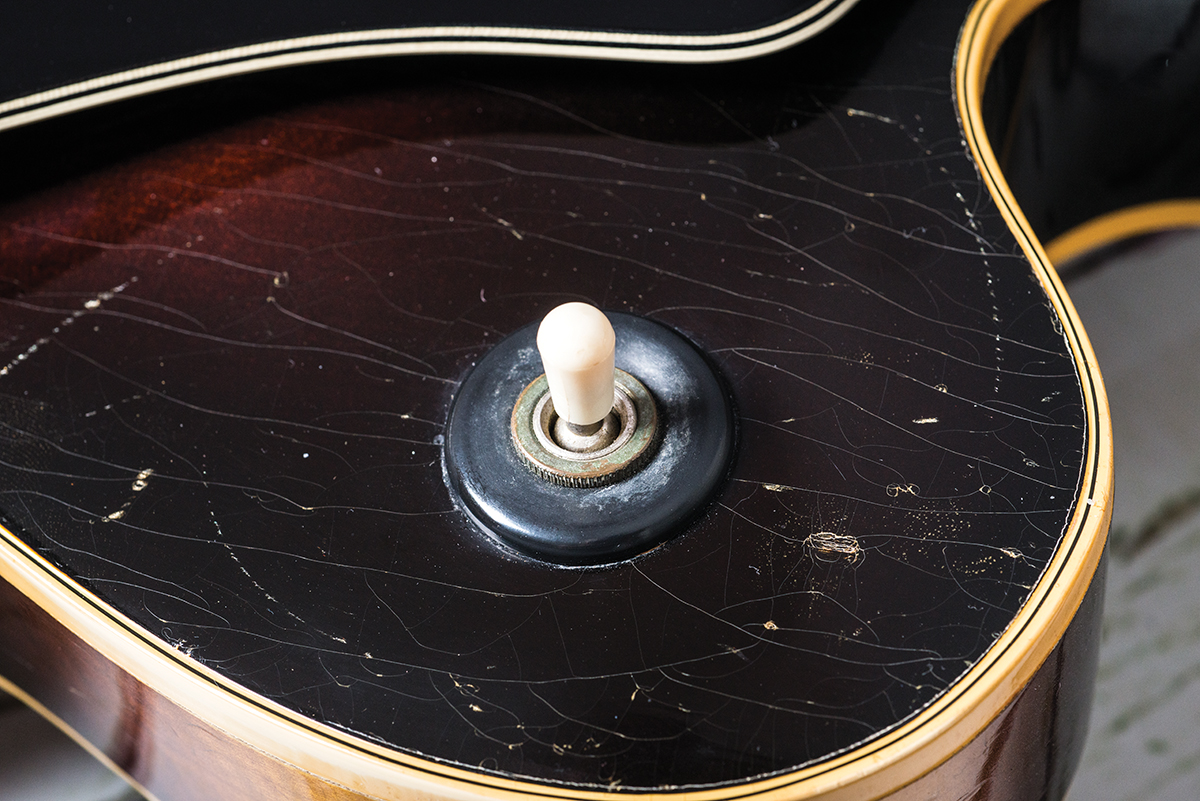 The rubber grommet and switch tip are later additions, but the switch itself appears original

My only complaint would be that the narrow string spacing makes fingerpicking a bit tricky, which is a shame because the sound lends itself perfectly to that playing style. However, if you want to play chord melodies without the painful stretches, blues and jazz solos or rocking rhythms, like me you may find this ES-350T a revelation.