With all of its original hardware in place and a sympathetic refinish by Clive Brown, Neil Ivison’s vintage Tele is a player’s grade gem. 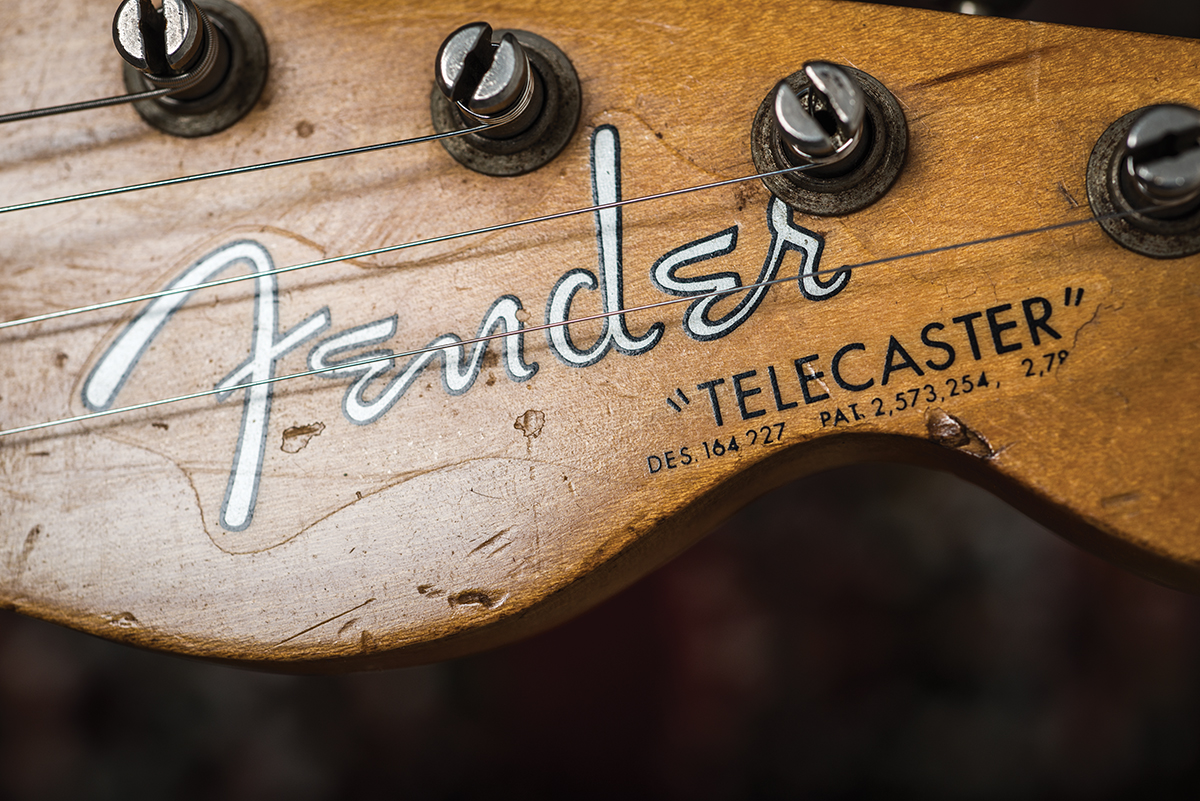 Taking the rose-tinted glasses off for a moment, it would probably be fair to describe this as a common or garden ’65 Telecaster. But before you conclude I’m damning it with faint praise, it’s worth pointing out that in the period prior to and immediately after the CBS takeover, Fender was producing some of its finest guitars – and a good vintage Fender is about as good as any Fender can possibly be. 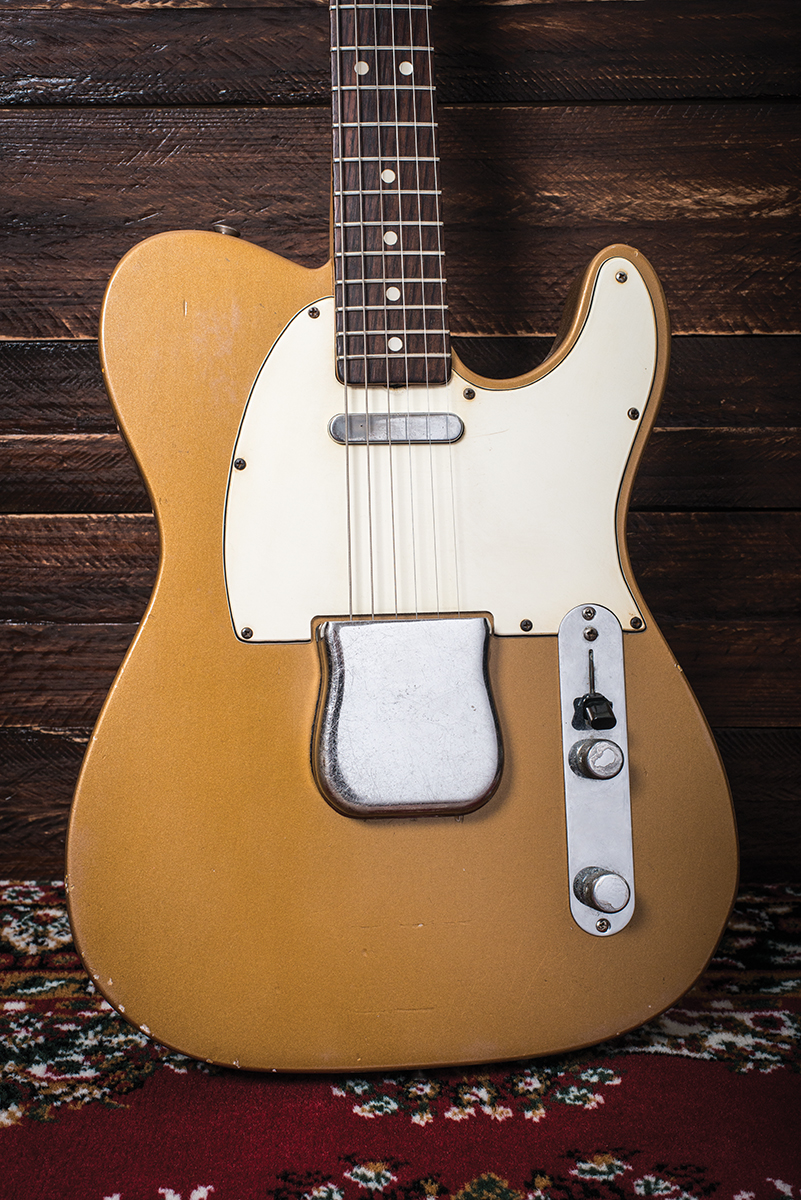 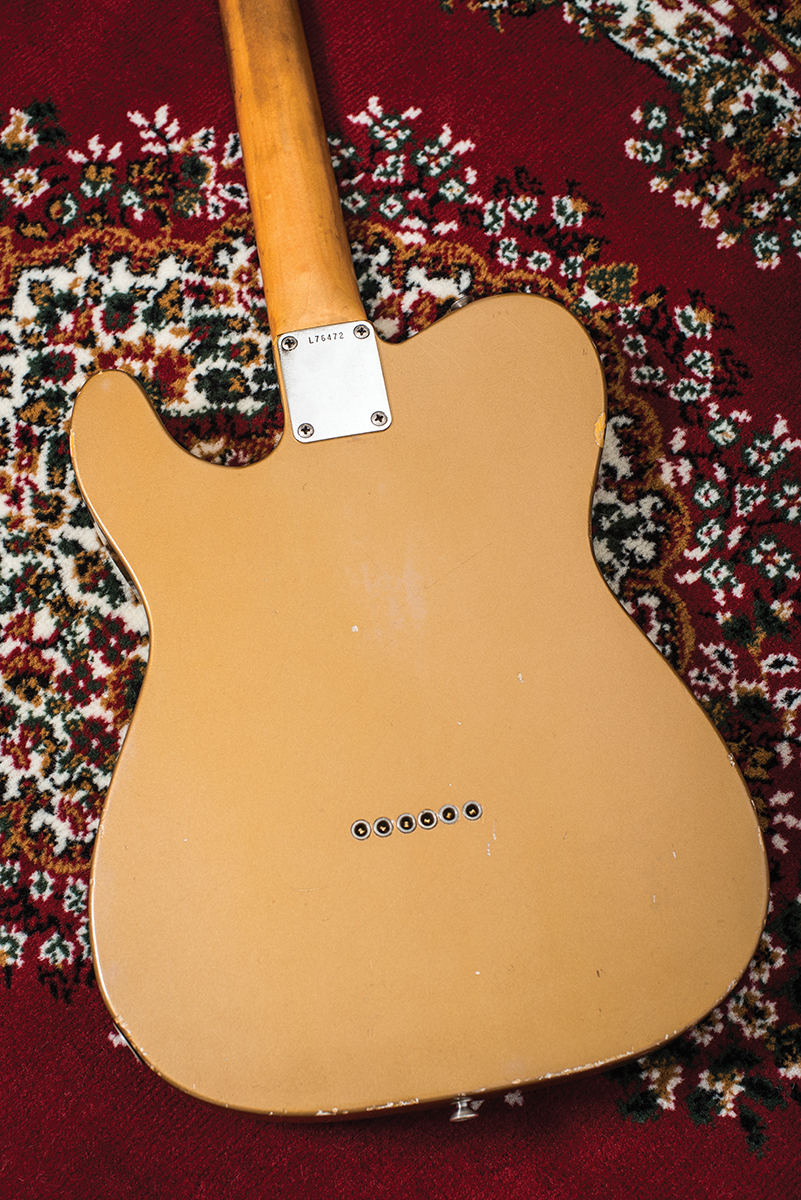 Examining this neck closely, it strikes me that from the late 50s onwards Fender was consistently ahead of the game on neck profiles as things at the factory became more standardised. 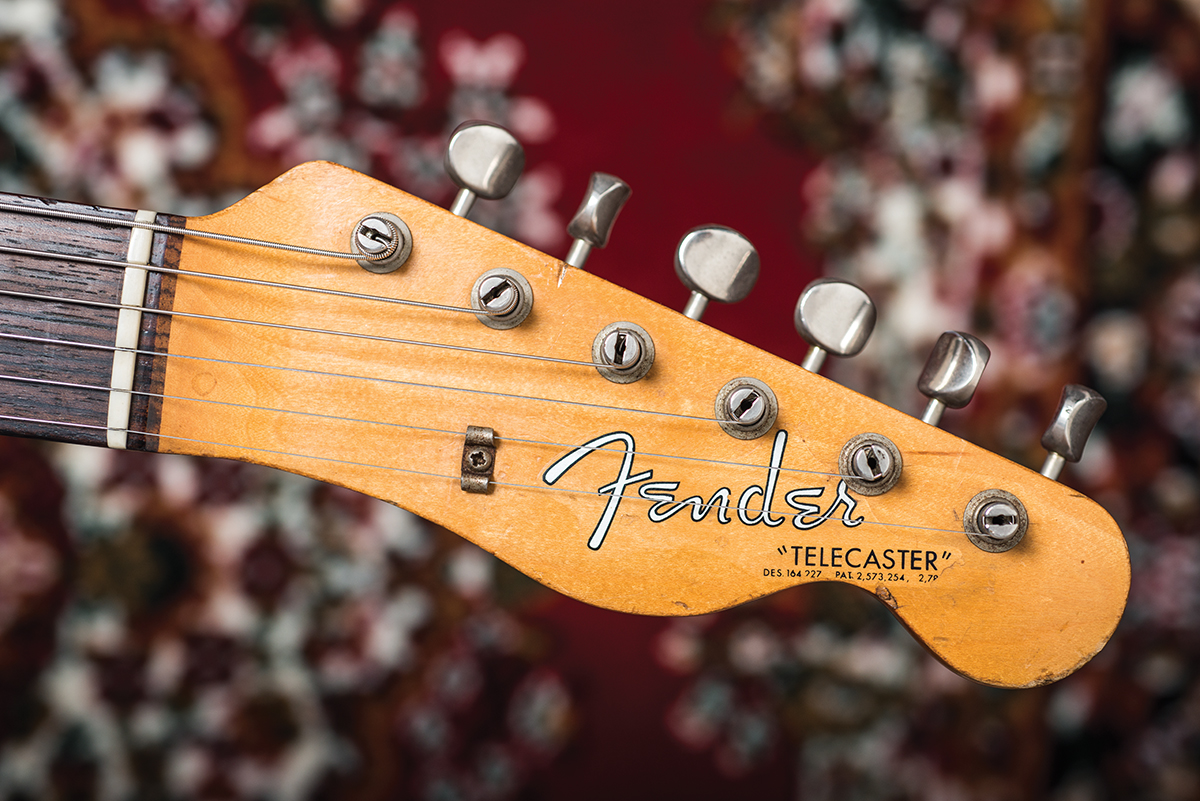 As a ‘crossover’ Telecaster, it’s fortunate this one got the earlier ‘spaghetti’ logo

Traditional guitar necks had been chunky because truss rods weren’t commonplace and necks had to withstand string pull unassisted. Even after truss rods became standard, some manufacturers were slow to slim things down.

At Fender, skinnier neck depths were the norm by the late 50s, and you can sometimes make a pretty good guess at a pre-CBS Fender’s date of manufacture from the neck profile alone. Although there were exceptions, most late-50s Fender necks were comparatively slim, but they retained a rounded profile. 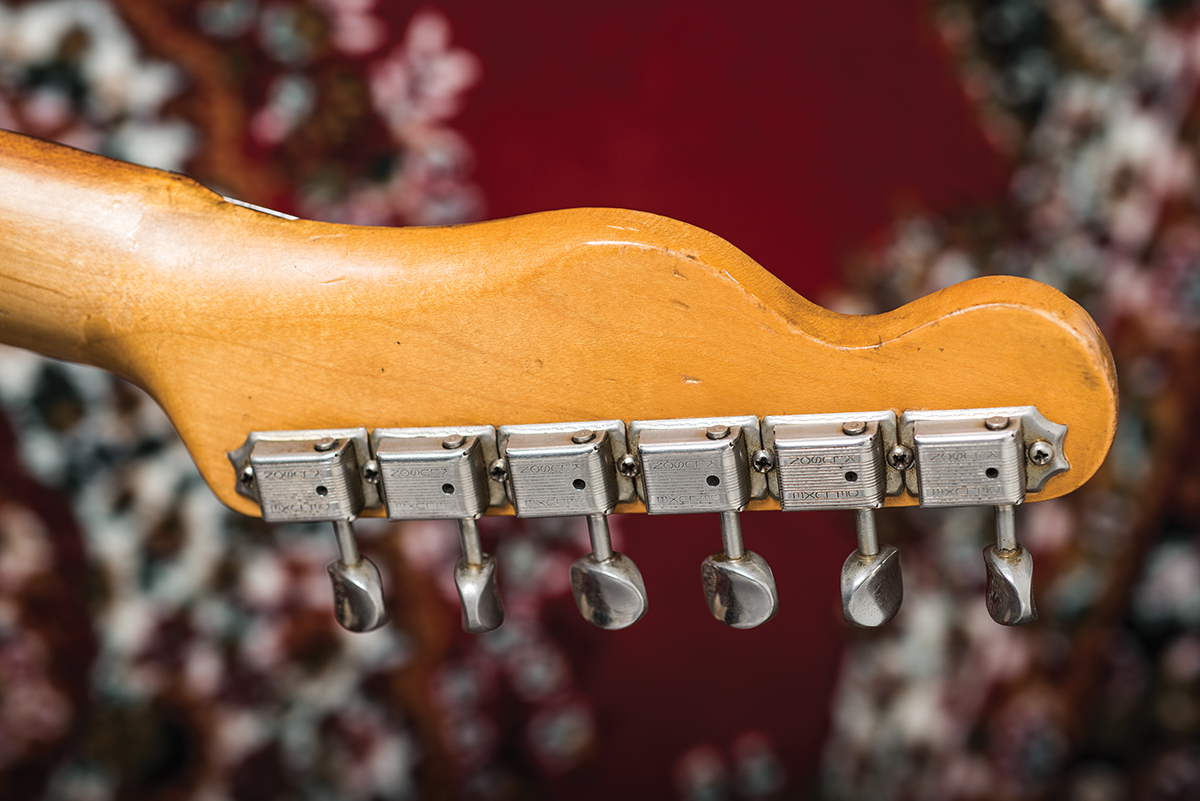 During the early 60s, the neck depth reduced noticeably under the first few frets, then thickened considerably from the fourth or fifth fret onwards. Up around the 12th fret, many early-60s necks feel almost clubby, so there’s a noticeable contrast between top and bottom. 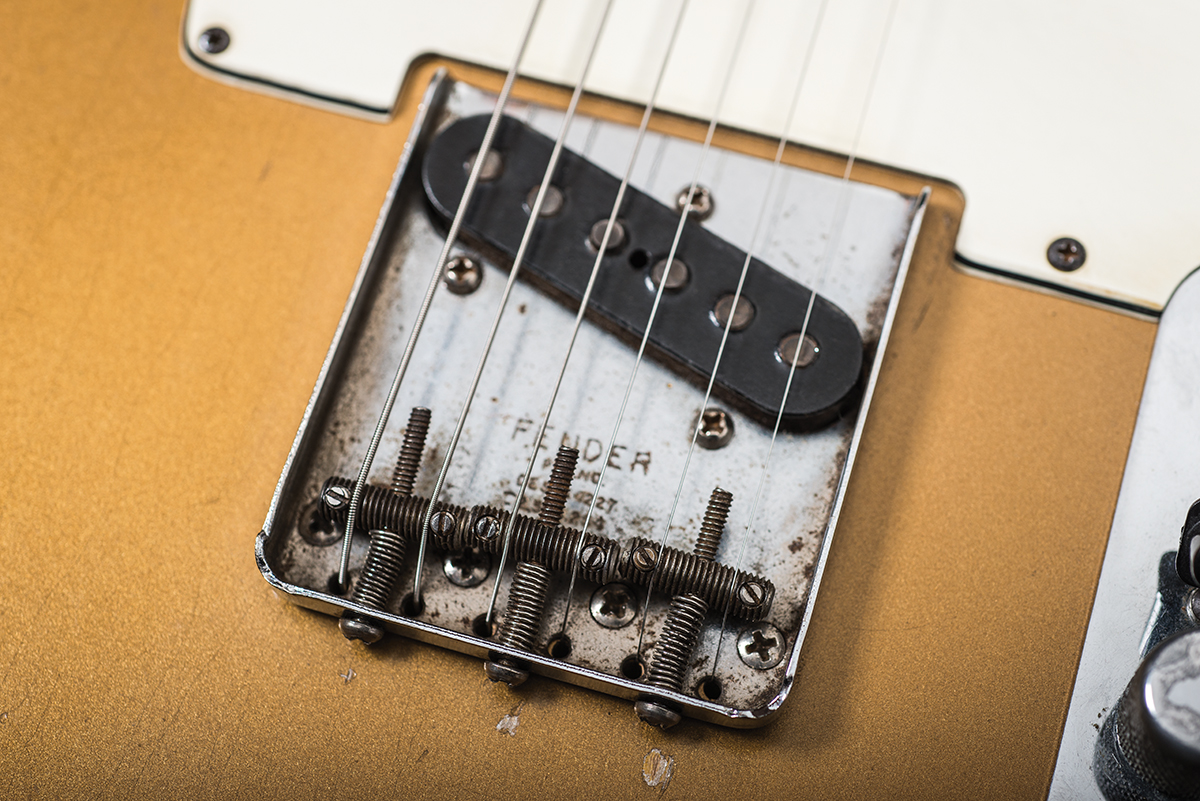 During the period between the introduction of serial numbers with the L prefix and the CBS takeover, Fender necks began to even out and open out from a D profile to more of a C shape. Depth increased under the lower frets, making for a more gradual transition along the length. 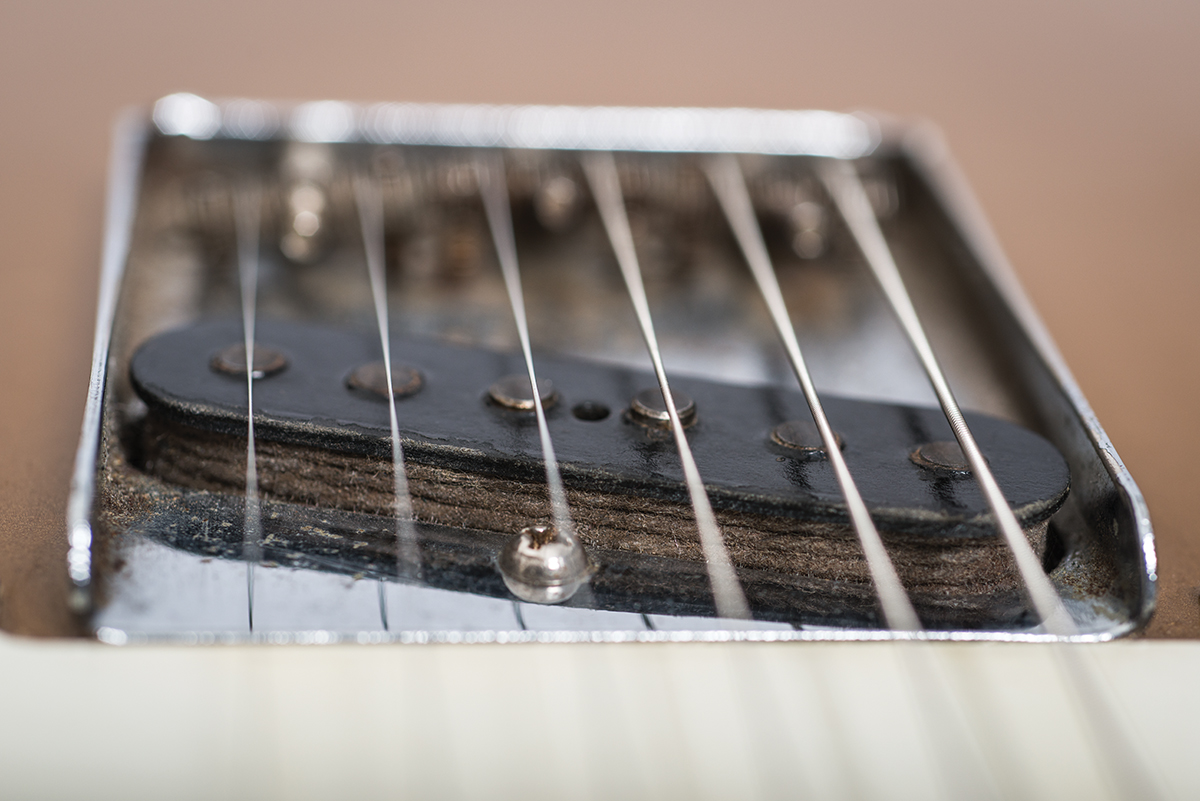 By around 1967, Fender necks often retained a fairly uniform depth from headstock to body as the upper end slimmed down, and it’s the type of modern/classic feel that remains commonplace on many contemporary boutique instruments.

For entirely different reasons, I find the best of the Fender necks from the L-series era to be every bit as good as Gibson’s necks from the mid-to-late 50s – and this Telecaster’s neck is a superb example. Its curve feels as though it was carved especially for my hand, and it somehow feels slim yet also substantial. The date stamp reads ‘February 65’. 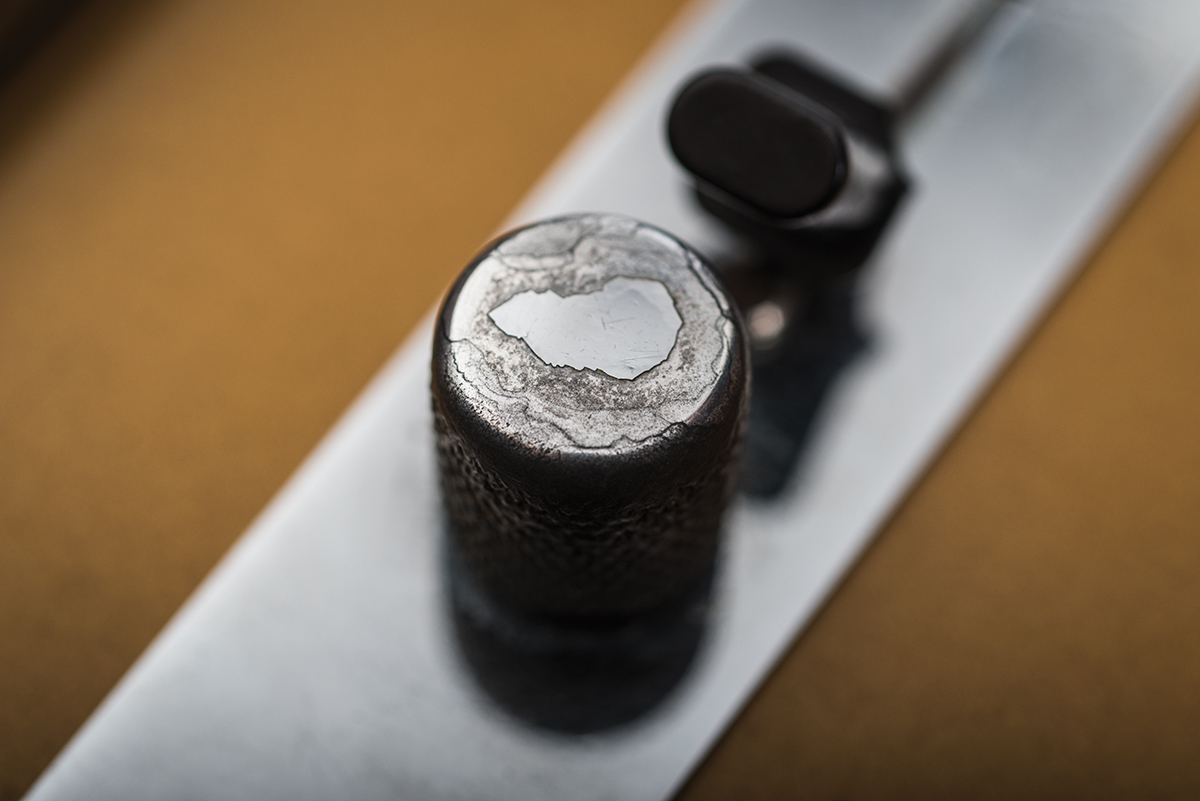 Some depth has been lost, which is probably due to board levelling when a refret was carried out. The fret tangs all touch the maple and the radius feels slightly flatter than Fender’s usual 7.25 inches, which many would consider to be an improvement.

Fortunately, that refret was a particularly good one, and the fret edges conform nicely to the rolled fingerboard edges. Owner Neil Ivison has also set up this guitar beautifully using the original threaded saddles, and it intonates sweetly all over the board. 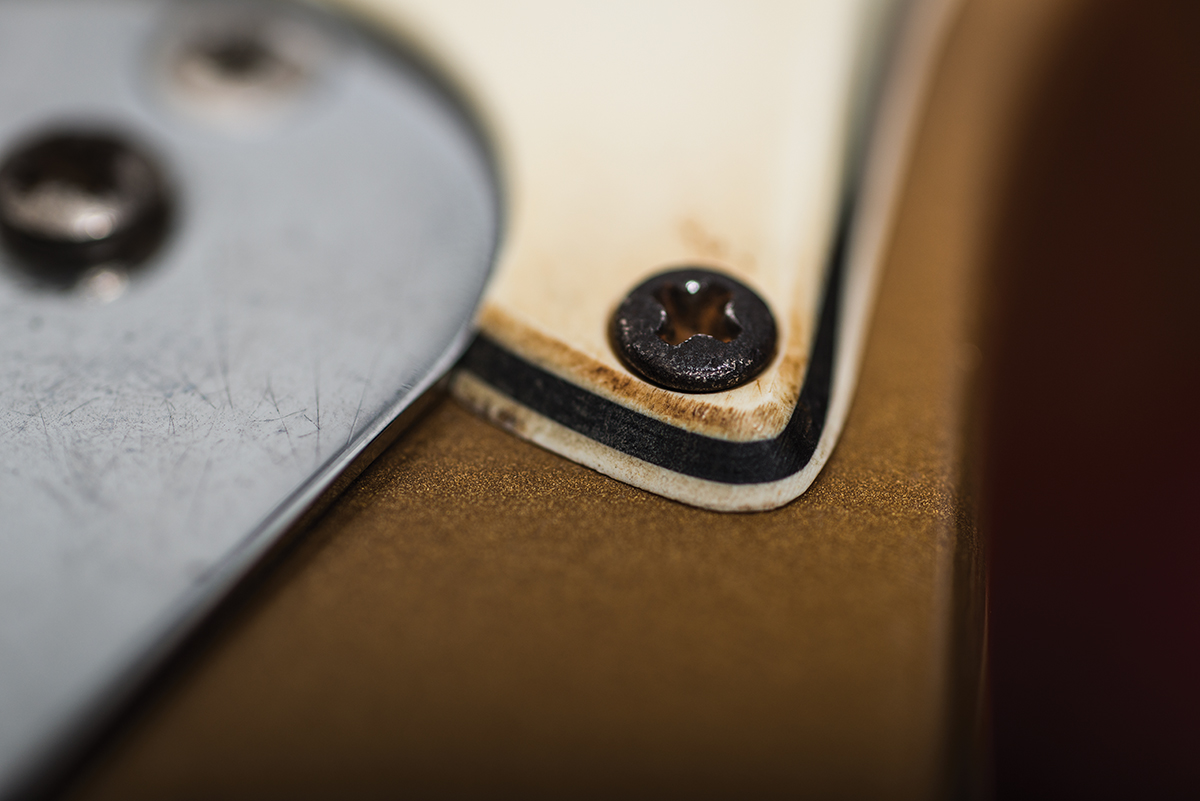 Some might call this dirt, but we think of it as patina

Under black light, everything checks out except the body finish. Neil believes renowned restorer Clive Brown performed the refinish and, although it was sold to him as a Shoreline Gold, the darker hue suggests it’s Firemist Gold. A surviving paint patch in the neck pocket confirms it was this Tele’s original colour.

A previous owner routed the body for a humbucking pickup, but the hole was filled during restoration. You might describe the look as ‘light relic’, but I’m going to go with ‘scarily convincing’. 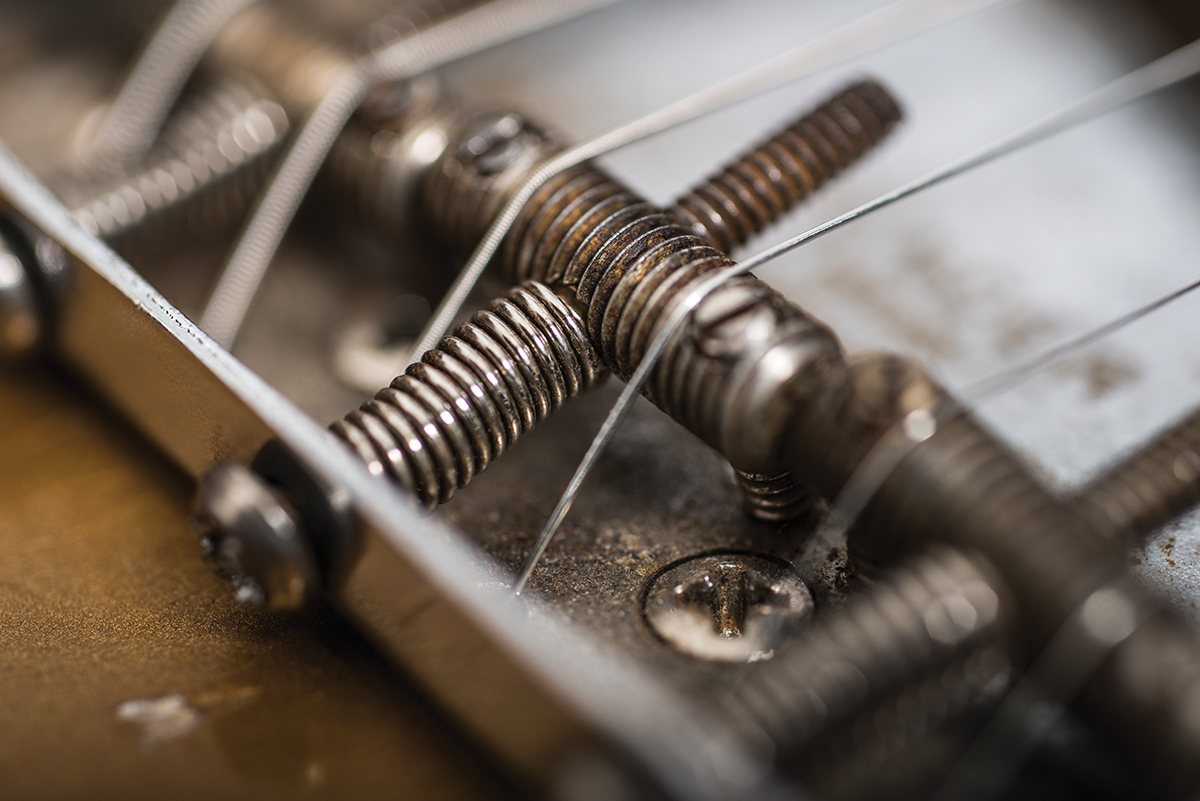 The threaded saddles are correct for a 1965 Telecaster, and for once the height adjustment screws don’t mute the strings

Under the control plate is the 0.05 ceramic tone capacitor I’d expect to see on a ’65 Telecaster, and the Stackpole potentiometers date to the 40th week of 1964. The switch looks right for the mid-60s, too, with a ‘half moon’-shaped Bakelite board and a white plastic centre wheel.

1965 Fender Telecaster in use

The wiring is non-standard because the tone control works only in the bridge and middle positions. When the neck pickup is selected, the tone circuit is disengaged, and the absence of treble bleed goes hand in hand with natural microphony to provide a lot more air and clarity than we’d usually expect. In fact, the neck position sounds as bright as the middle setting. 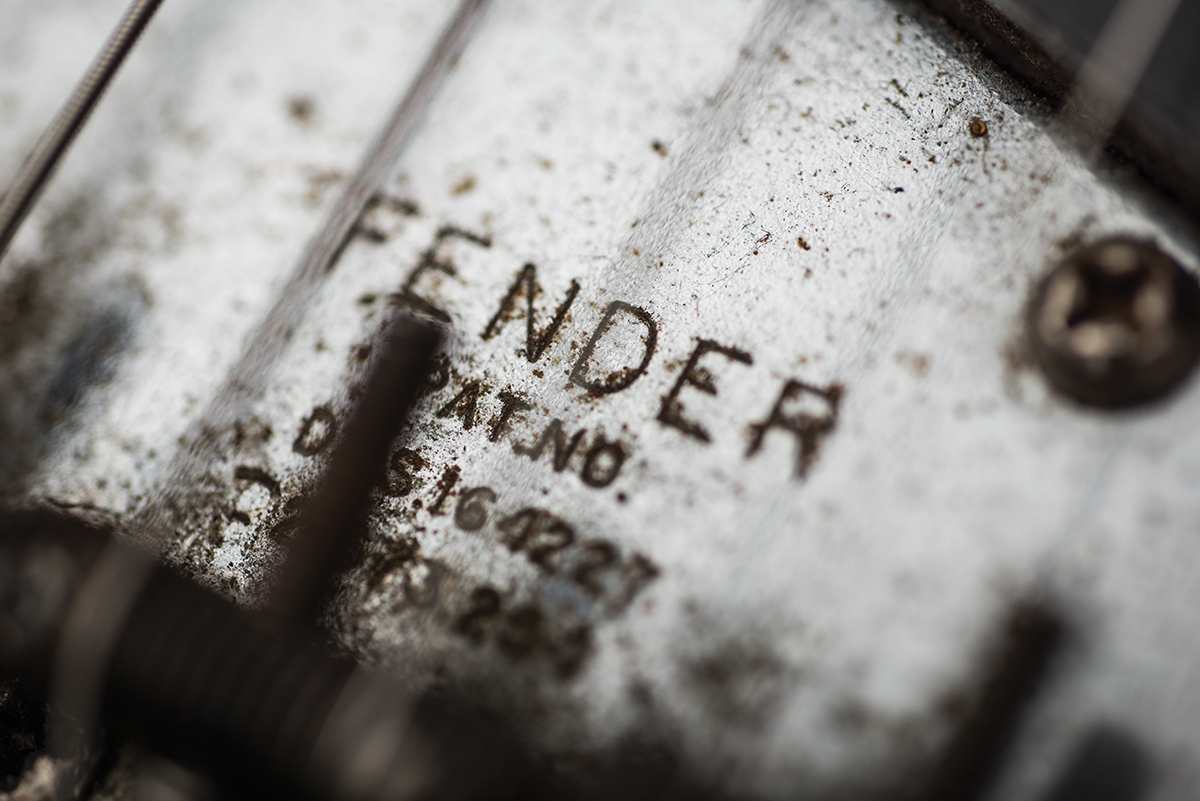 In the early days, Fender stamped the guitar’s serial number on the bridge plate, but by 1965 the plates were stamped with patent numbers instead

Like a typical mid-60s Tele bridge pickup, this one sounds cutting, twangy and snarly, so having it routed through the tone circuit balances things out. 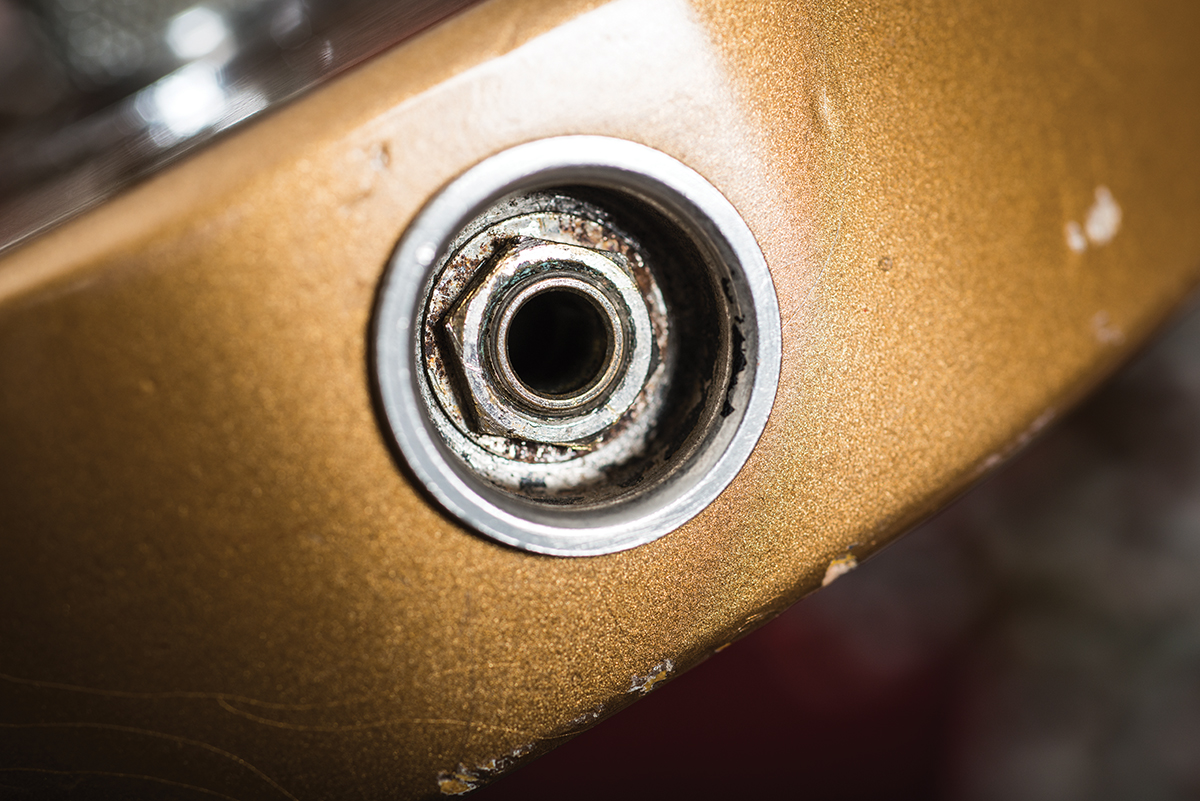 You don’t have to deal with the too dark/too bright contrast that blights some Telecasters. Compared to an early-50s spec Tele, this guitar doesn’t have the woody jazziness at the neck or the pronounced quack at the bridge.

Instead, you get a more metallic jangle, a less forward midrange and extra low-end punch. It’s certainly closer to Steve Cropper’s tone than Danny Gatton’s, and in rhythm and lead modes this Tele can cut through any mix with its extended but shrill-free treble. 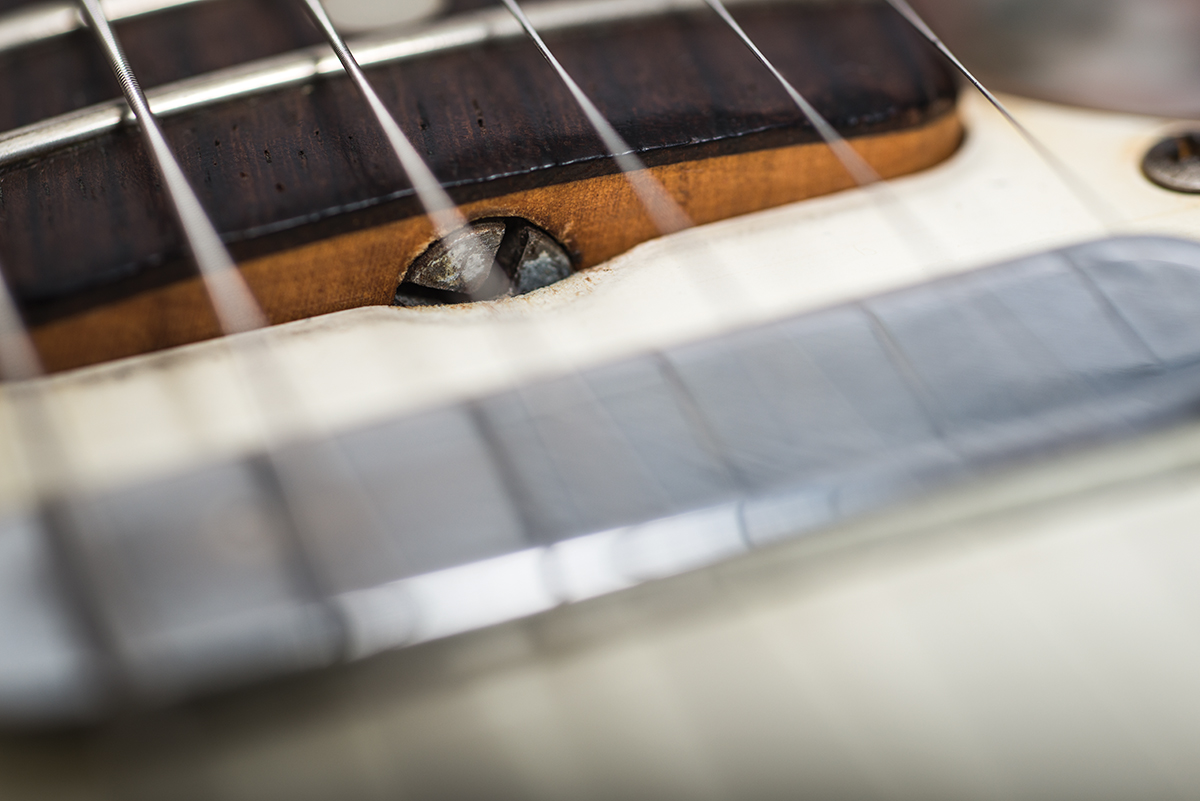 Through a blackface-style amp, the lively transients might have you reaching for a compressor pedal, but with squashier-sounding tweed and Vox-style circuits the slight spikiness becomes more of an asset. Essentially, it’s the classic 60s Tele tone you’ve heard on thousands of records, and all you have to do is tune it up, plug it in and play. 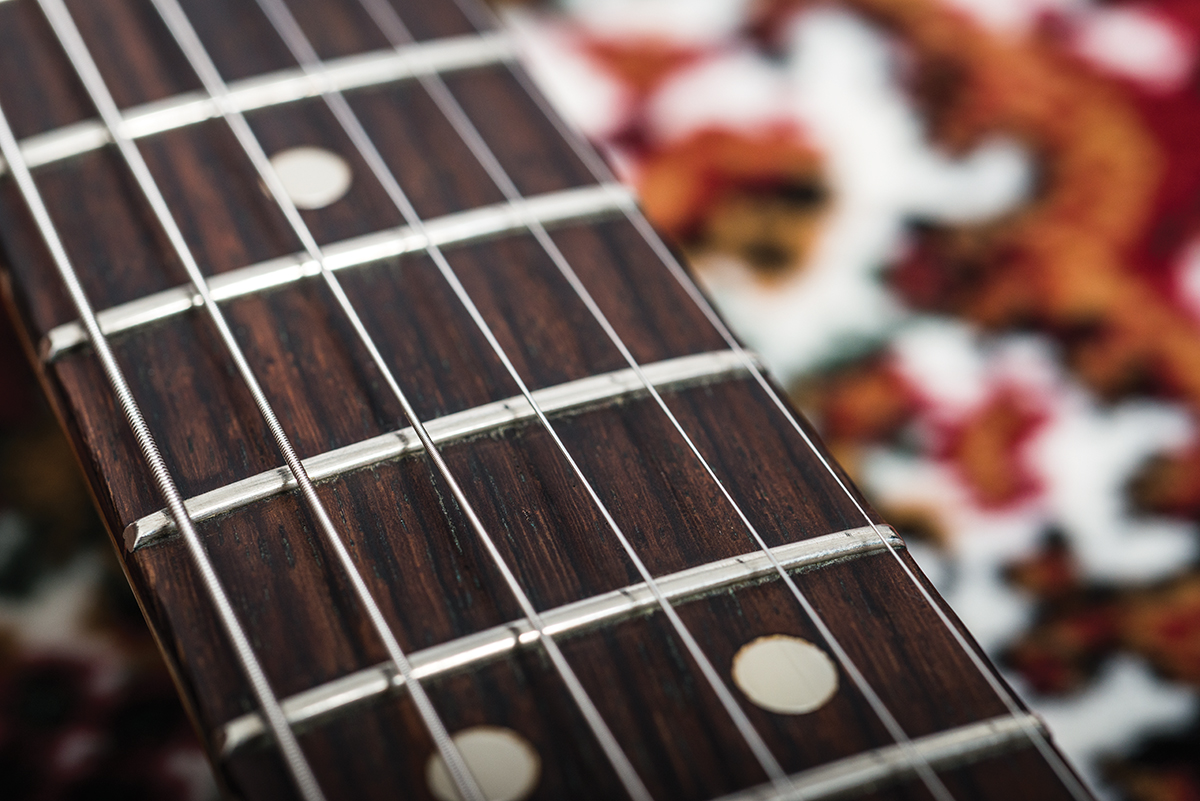 The marker dots are CBS-era pearl, and this neck probably missed getting ‘clay’ dots by a matter of weeks

This Tele has had some routing filled in and its body has been refinished, but so what? All the original hardware is still present and correct and, to put it bluntly, a finish like this doesn’t make any difference to the tone or playability. Thanks to the refinisher’s considerable expertise, you certainly wouldn’t look at it and think, ‘Shame about the refin’.

He’s restored it to its original colour and, unless it’s being examined under black light, the result is outstanding and sympathetic. A refinish – even of this quality – makes a vintage Fender a more affordable proposition for we mere mortals. 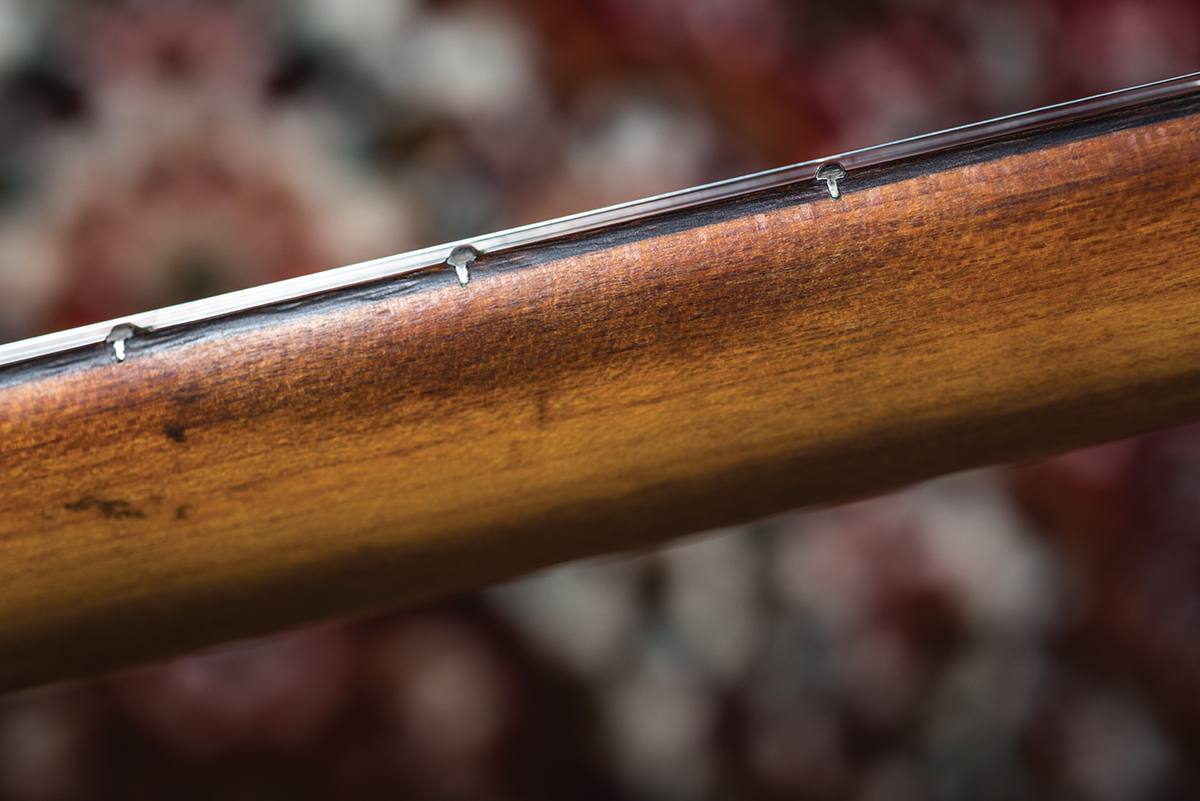 If anybody has replicated the feel and look of the oxidised maple of a vintage Fender neck with complete success, we have yet to see it

After all, gigging a player’s grade classic is a far less daunting experience than gigging an irreplaceable museum piece, and if you dent the thing you can call it honest play wear. So our thanks go once again to Neil for the loan of his absolutely stellar Telecaster. 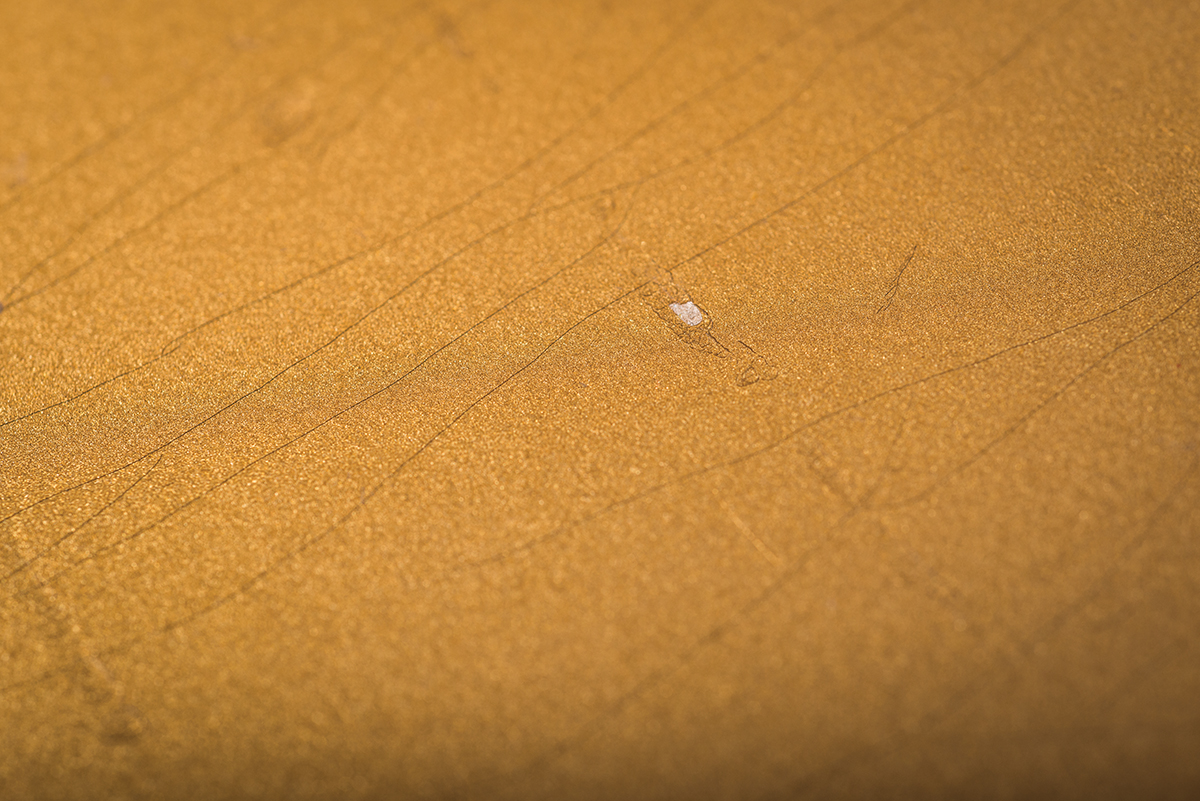 Lovely longitudinal lacquer checking, and not too much of it is a hallmark of a pukka relic refinish