With more than 50 years on the clock, this classic semi-acoustic is still in near-mint condition. We take a closer look… 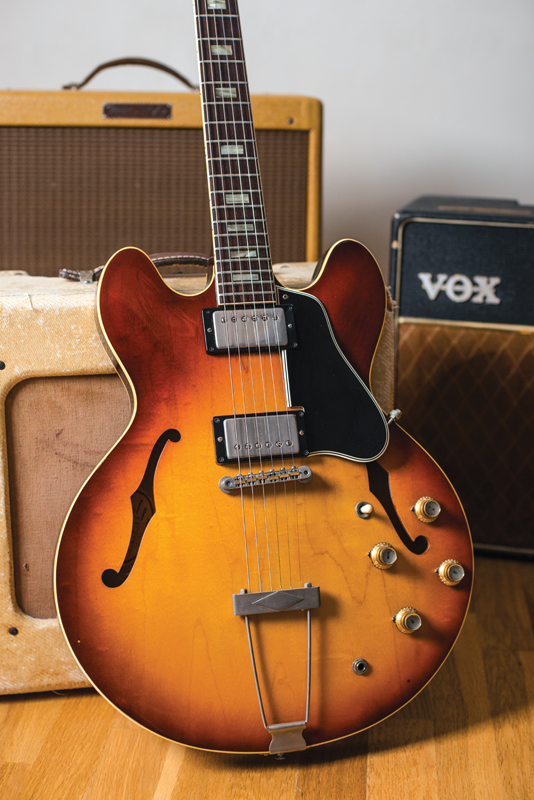 It’s never been entirely clear if ‘iced tea’ and ‘honeyburst’ were actually official finish options that Gibson offered during the 1960s, or whether they are simply amongst a number of terms dreamed up by collectors and dealers to describe the various ways in which sunburst finishes have faded.

This ES-335’s finish corresponds with what I understand to be a honeyburst, and I’m pretty certain it looks much the same today as it did when it was new. Because the back looks identical to the front, I can report with some confidence that this ES-335 has barely faded at all, and it’s in near-mint condition.

Almost everything seems present and entirely correct. The only changed part, as far as I can tell, is the nut, but the bone replacement has been done properly and the factory nylon nut can be found inside the original case.

As a 1965 example, this ES-335 just squeezed in under the wire to get nickel hardware and a fingerboard that’s almost certainly Brazilian rosewood. The pickups carry patent number stickers, and an attractive patina has developed on the covers. 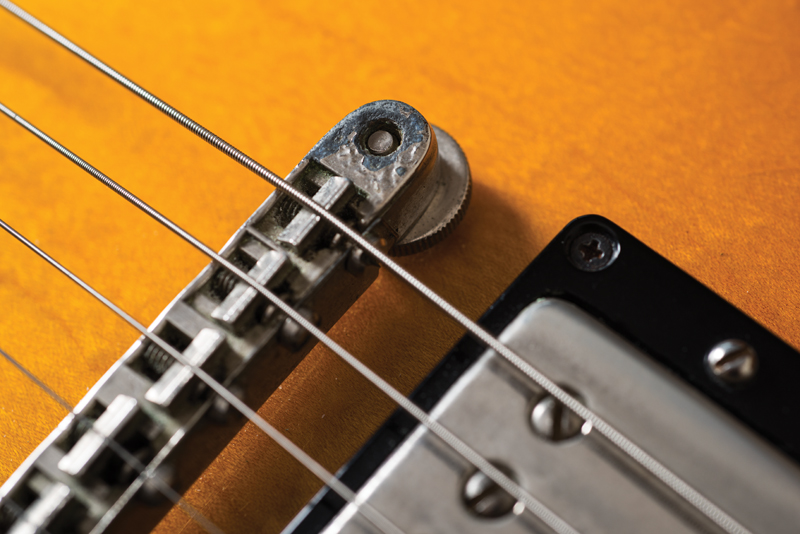 Playwear is minimal, with just a small area of corrosion on the bass side of the bridge. It’s the correct ABR-1 with a retaining wire and metal saddles. Personally, I think ES series guitars sound nicer with nylon saddles, and it’s a cheap, easy and reversible modification to perform. The back of the neck retains all its lacquer, and the binding nibs are still there to be seen, along with original frets that appear to have plenty of life left in them.

The back is unblemished, save for a small area of buckle rash that’s no more than 10mm in diameter. There are some tiny chips in the finish on the front, but you have to look closely to spot them. An attempt has been made to drop fill one with lacquer, which might have worked out better if the person responsible had used the correct colour. It’s also worth noting that finish checking is minimal on this guitar.

It’s good to see the original multi-ply pickguard hasn’t gone AWOL. Some old Gibson pickguards curl up dramatically, and can even obstruct access to the treble E string, but this one has curled only very slightly around the neck pickup surround.

I will always test an electric guitar acoustically before I run it through an amp, and many solidbodies are a lot of fun to play that way. You might reasonably expect semi-solids, such as the ES-335 and its close cousins, to sound even better unplugged than solidbodies. In reality, the experience can sometimes be pretty uninspiring. 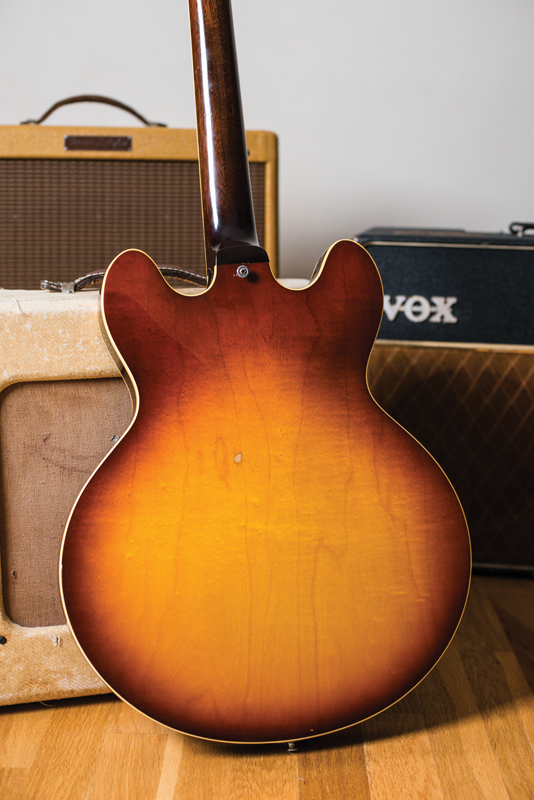 Many ES-335s have a plunky, banjo-like quality, with very little natural sustain and a muffled wound-string response that makes them sound worn out, even when they’re brand new. Oddly enough, the electric tone can often sound fabulous even when the acoustic sound isn’t. So where does this 50-year-old beauty reside on the resonance spectrum?

The tone is very full and very mellow, but there’s plenty of sustain and even the low strings sound fairly crisp. There is some degree of treble roll-off, but the tone is smooth and even across the strings. Although fine acoustic tone is not always a signifier of quality plugged-in tone, it is nevertheless a good start.

Like PAFs, these Patent Number humbuckers are extremely sensitive to height adjustment, and proximity to strings can dramatically alter the tone and character of a guitar. When I got hold of the ES-335, its pickups were set relatively close to the strings, and the result was a quite gutsy, thick tone. At the same time, it was very smooth and somewhat compressed with a soft treble response that worked really well with amp overdrive and pedals alike. 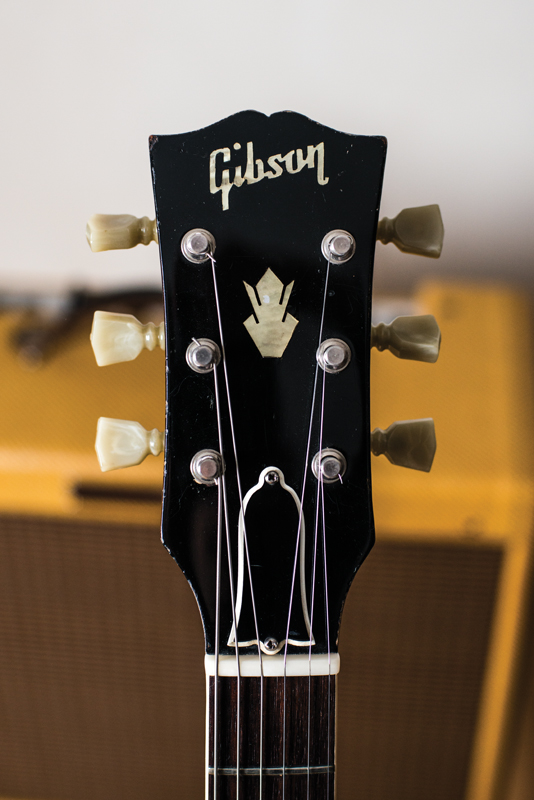 Dropping the pickup height opened out the sound a little more, and really brought the in-between setting to life. This is where setting the pickup height makes all the difference, and can veer the tone from a nondescript amalgam of two pickups into something distinctly different. This ES-335 acquired an extra degree of woody honk that proved quite inspiring for clean and funky rhythm playing and bluesy licks.

Having a ’57 Goldtop Les Paul on hand for comparison revealed how very different PAF and Patent Number Gibson humbuckers can sound. The PAFs are far more touch sensitive, they’re brighter and there’s a layer of upper-harmonic complexity that seems to be uniquely theirs.

In contrast, the Patent Numbers are more forgiving in some ways, and they have a mellow and even quality that really works for jazzy chord voicings and smooth soloing. The midrange is also thicker and more up-front. 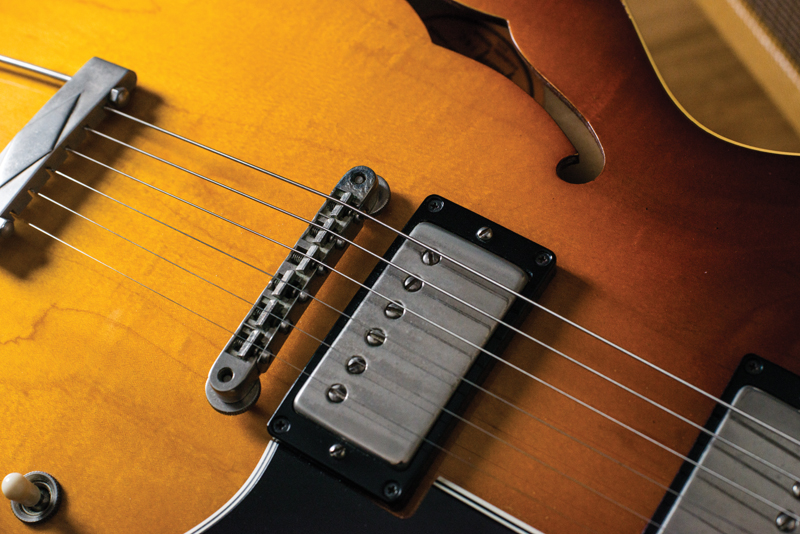 Another big plus mark for this ES-335 is the neck dimensions. Some mid-60s Gibson necks feel slim and narrow, and depending on your preferences, they can seem a bit cramped. While it’s no ’58 or ’59, this neck has a really comfortable medium depth. The regular string spacing at the nut also helps to make this a very easy-playing vintage guitar.

On closer inspection, the frets are serviceable, but fairly low and very flat on top. If you use a lot of string bending and vibrato, a full fret job may make this an even better player, although you may devalue the guitar in the process.

The trapeze tailpiece is another thing to consider because some players think it has less sustain and makes string bending harder due to the extra string length. Bear in mind that many late-60s ES-335 players, Larry Carlton included, have installed stop tailpieces on their guitars. On the other hand, the trapeze does allow them to resonate in a different way, that results in a mellower and jazzier tone.

There are no playability issues, tuning is stable and everything works as it should. Although the pickups sound quite different to PAFs, their smoother and softer response and direct tone might well be better suited to certain playing styles. This fine-looking ES-335 is almost perfectly preserved, and it’s unlikely you’ll find a cleaner example from this year.