A vintage Gibson acoustic is many a producer’s secret weapon and this gorgeous example certainly has ‘that’ sound.

Over the years, Gibson’s more spartan designs have often proved more popular than its top-of-the-range bling machines. Les Paul Standards are generally preferred to Customs, the simplicity of the ES-335 has greater appeal than the ES-345 and ES-355, and so it is with the J-45 and J-50 acoustics.

In the case of the aforementioned electric guitar models, there were significant structural, stylistic and even electronic differences within the range, but the only feature that distinguishes a J-50 from a J-45 is the J-50’s natural finish. It takes longer to spray a sunburst, of course, but maybe Gibson was able to hide the imperfections of lower grade spruce tops in the shade. 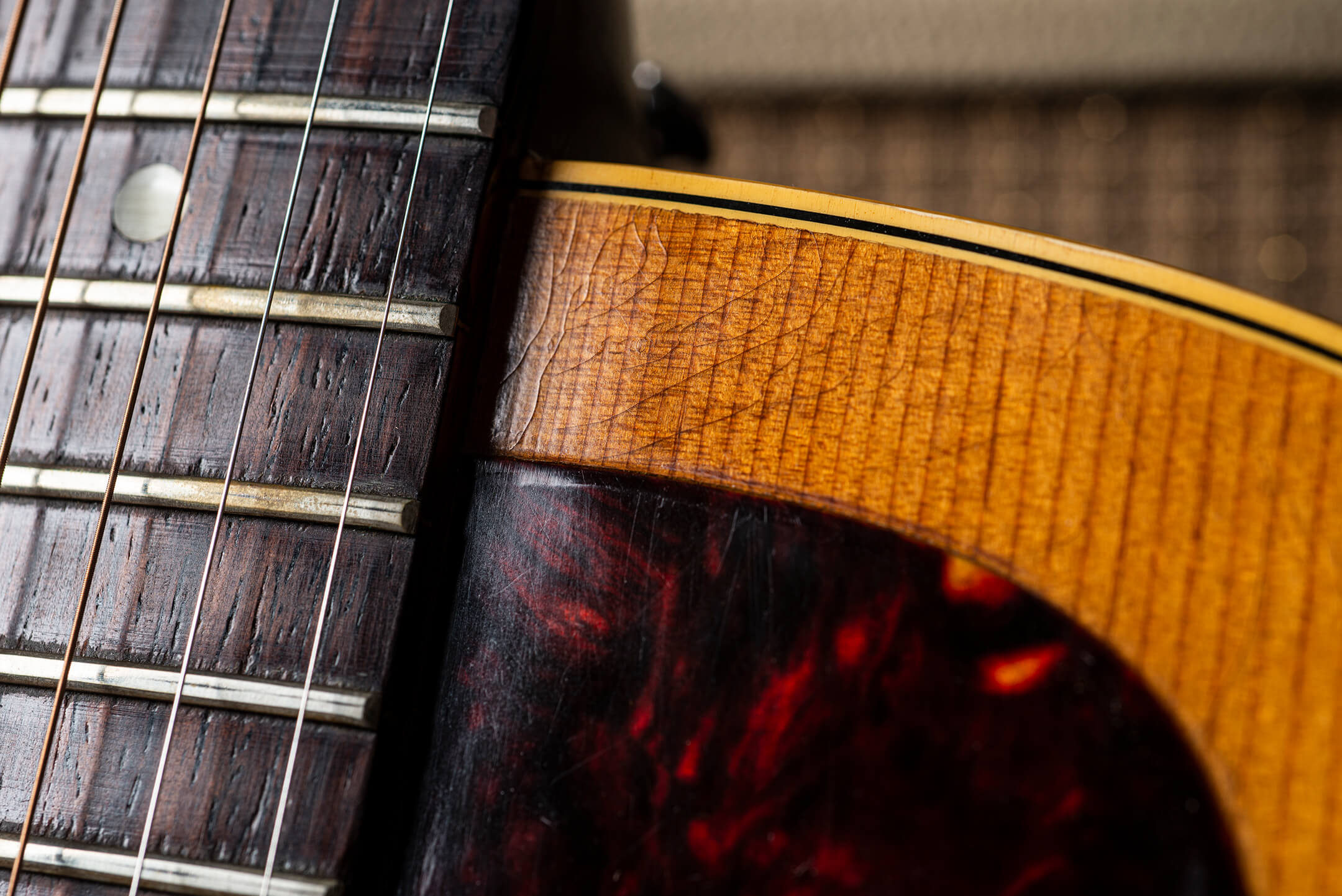 Otherwise, the pre-1969 slope-shouldered dreadnought body shape, with its spruce top and mahogany back and sides, is identical. There’s nothing fancy on the inlay or pickguard fronts either, so in essence, the J-50 is a J-45 with a different finish.

This 1963 model is a lovely example, but it clearly has some history. There’s nothing sinister, just evidence of the running repairs that will always be needed on a vintage acoustic that somebody actually wants to play rather than hang on a wall. 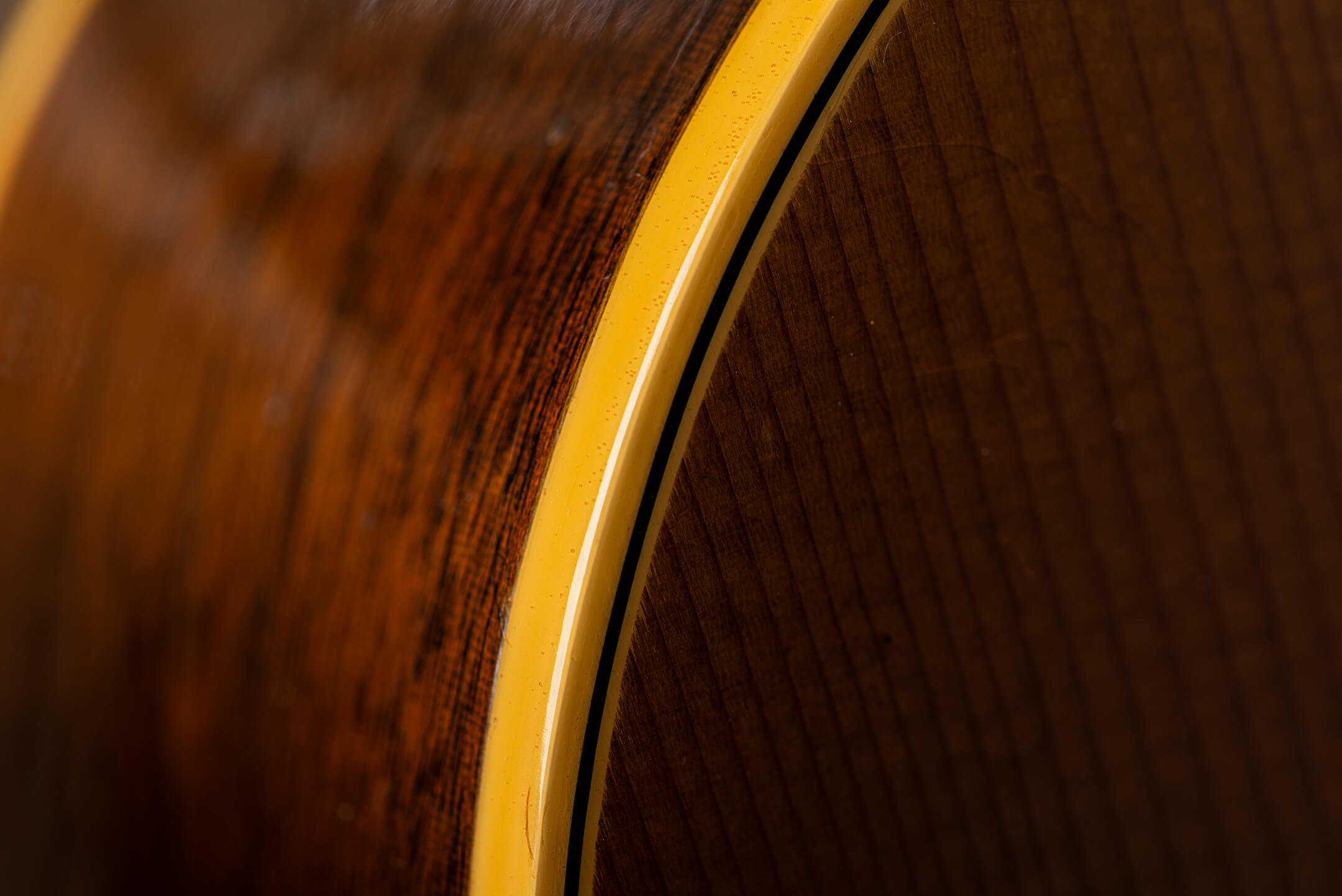 There was a time when celluloid was the only pickguard material available, but in retrospect, gluing it onto wood tops was asking for trouble. Celluloid tends to shrink and warp, and ditto spruce, but these two materials don’t always agree on the direction or extent of movement. This may explain why Gibson changed to thicker and more stable styrene pickguards later in 1963.

Here the top has cracked from the soundhole to the bridge, but somebody had done a solid repair – closing the gap and reinforcing with cleats to prevent the crack from opening again. The guard has also caused the top to curl upwards around the perimeter of the pickguard rings, but again it appears stable and solid.

“The dry, warm and mellow tones are even more familiar than the neck profile”

The top’s centre seam has seen some glue over the years, but it was done professionally and almost invisibly. There are some scratches behind the bridge, which suggests that the bridge may have be re-glued. It appears tightly bonded to the top, although there are some tiny gaps at the edges and rear.

Two additions have also been made, with a strap button on the treble side of the heel and a fine-sounding K&K three-sensor pickup system beneath the bridge plate. The strap pin on the heel has been replaced with a strap button/jack socket combo, so this J-50 is gig-ready. 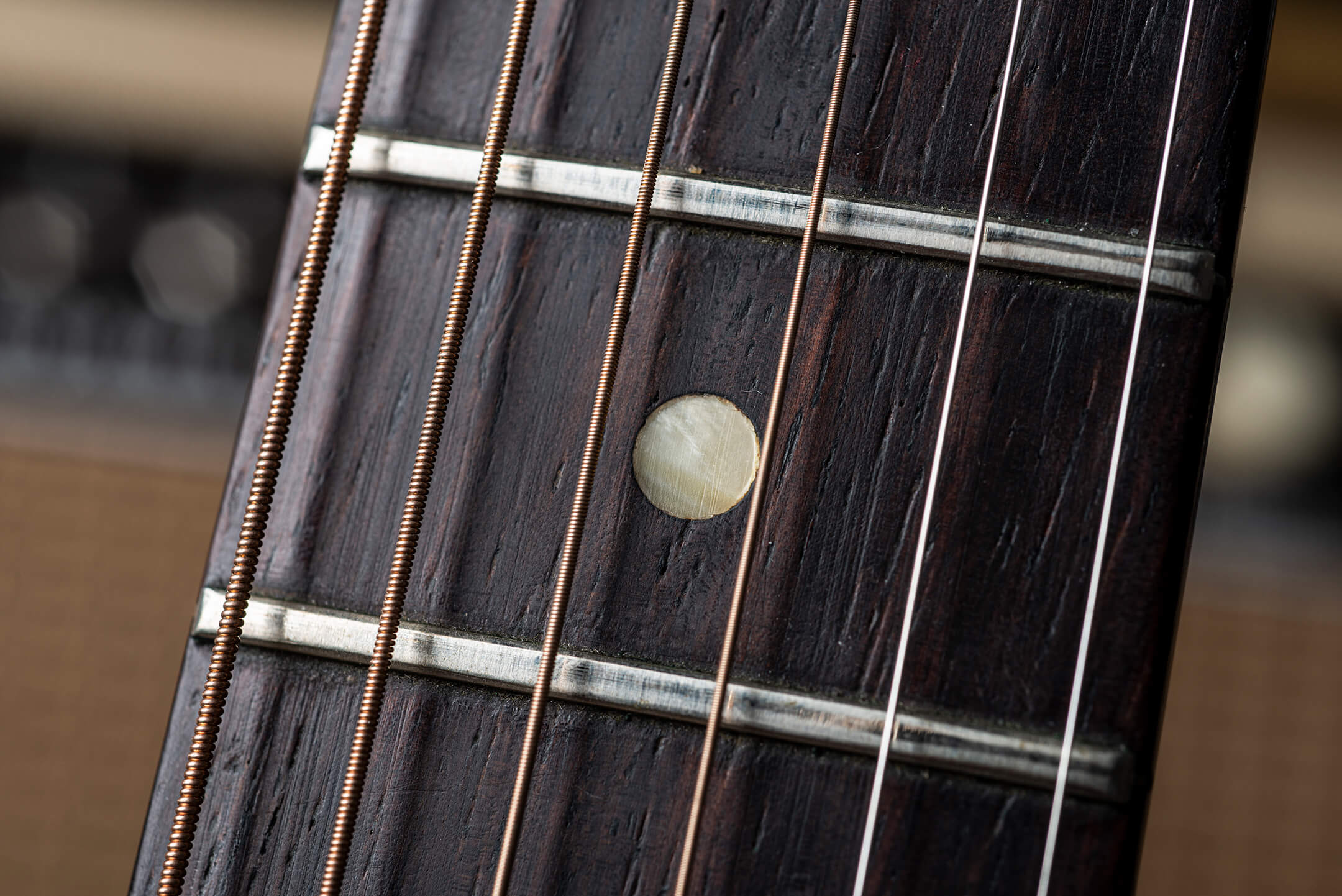 We’re pleased to see the original single line three-on-a-plate Kluson tuners are still fitted, and they’re in fine shape. In fact, the whole guitar is in fairly remarkable condition, with no discernible playwear on the back of the neck and barely a hint of buckle rash on the back.

The all-important neck joint looks absolutely rock solid, with no heel gap or lacquer cracks along the join line. The original frets are hardly worn and this J-50 still has its factory fitted nylon nut. The Brazilian rosewood fingerboard shows some very minor wear over the first three frets and the neck lacquer looks shiny up to the fourth and a bit dull above that. It’s reasonable to conclude that whoever owned this guitar previously rarely ventured beyond the cowboy chord positions. 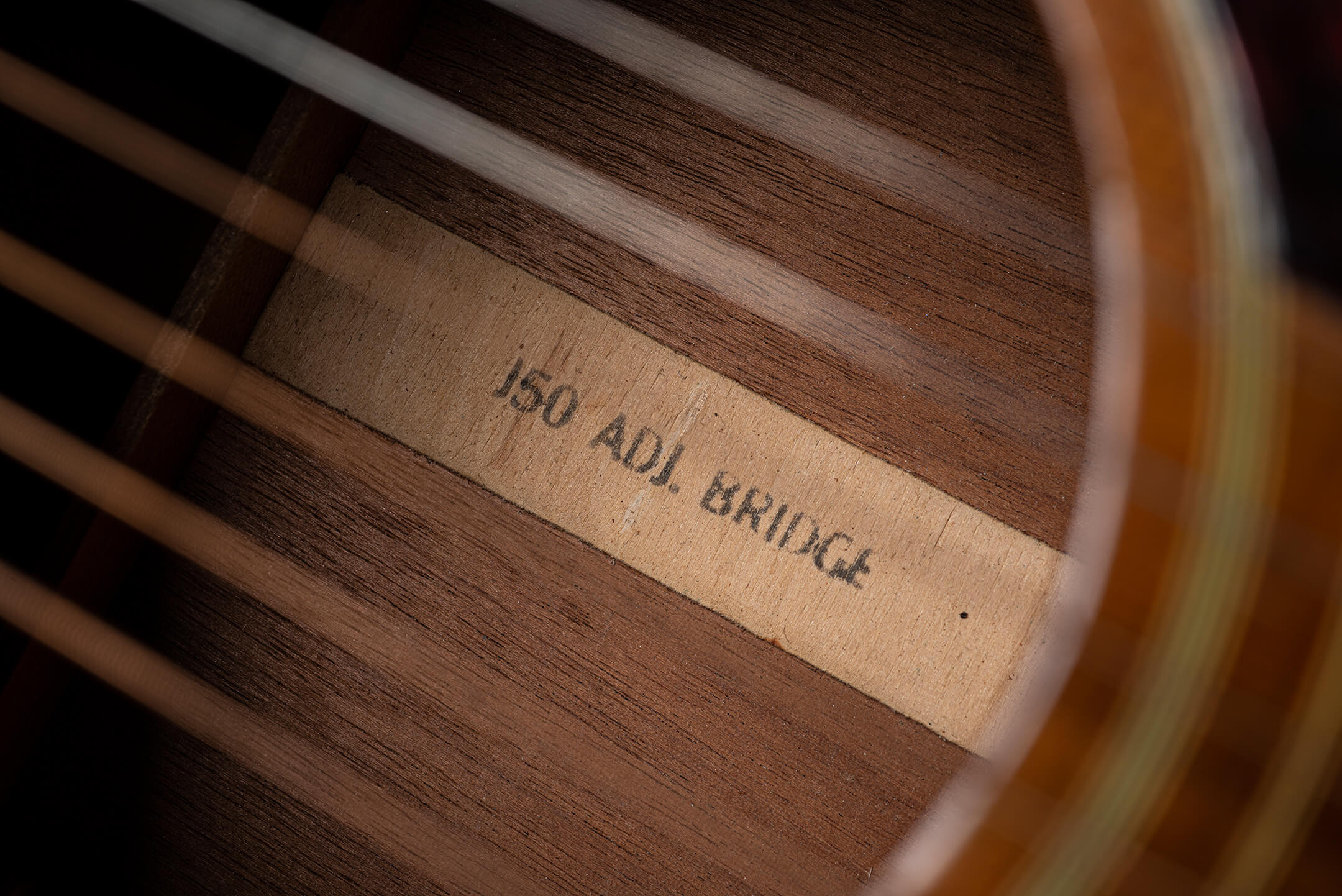 In 1963, Gibson made the lamentable decision to replace the rosewood bridges on the J-45, J-50 and various LG models with plastic bridges. You may wonder how they glued plastic onto the spruce, and the answer is that they didn’t. Instead they were bolted to the top – we’re pleased to see that this guitar never suffered that fate.

“The all-important neck joint looks absolutely rock solid, with no heel gap or lacquer cracks along the join line”

Here, there’s Gibson’s ‘backwards’ rosewood bridge with two pearl dots covering the locating bolts, and a full set of original bridge pins. It also features Gibson’s adjustable saddle design. The saddle here is rosewood and there’s a small screw at each end to set the height.

It’s widely accepted that transferring sting energy to the top as efficiently as possible is fundamental to achieving great acoustic guitar tone, and acoustic builders put considerable effort into ensuring that saddles are perfectly square along the bottom so that maximum physical contact is made. With Gibson’s adjustable arrangement, the saddle is only coupled to the top at each end. Is it detrimental to tone? Let’s find out. 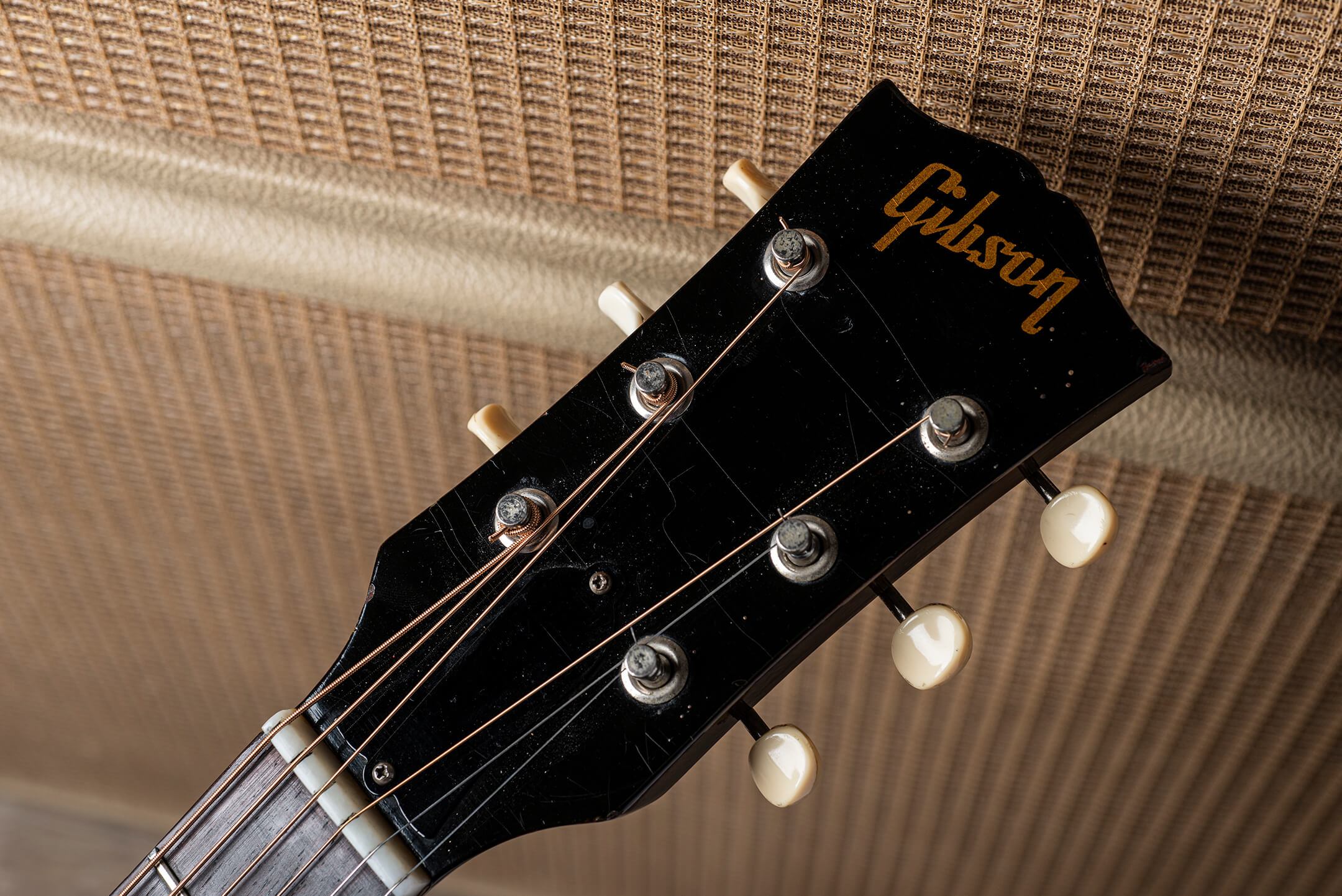 This guitar plays flawlessly. The neck profile has a medium depth, with the soft shoulders that grace Gibson’s finest necks. This one eases into your hands and makes the guitar feel like you’ve been playing it for decades. In addition, the nut is in perfect condition, the action is fairly low and could even go lower, and the original frets still have years of life left.

The dry, warm and mellow tones are even more familiar than the neck profile. It doesn’t do airy harmonics, or thunderous bass. Instead the focus is on the midrange, with a gentle punch and clear string separation. 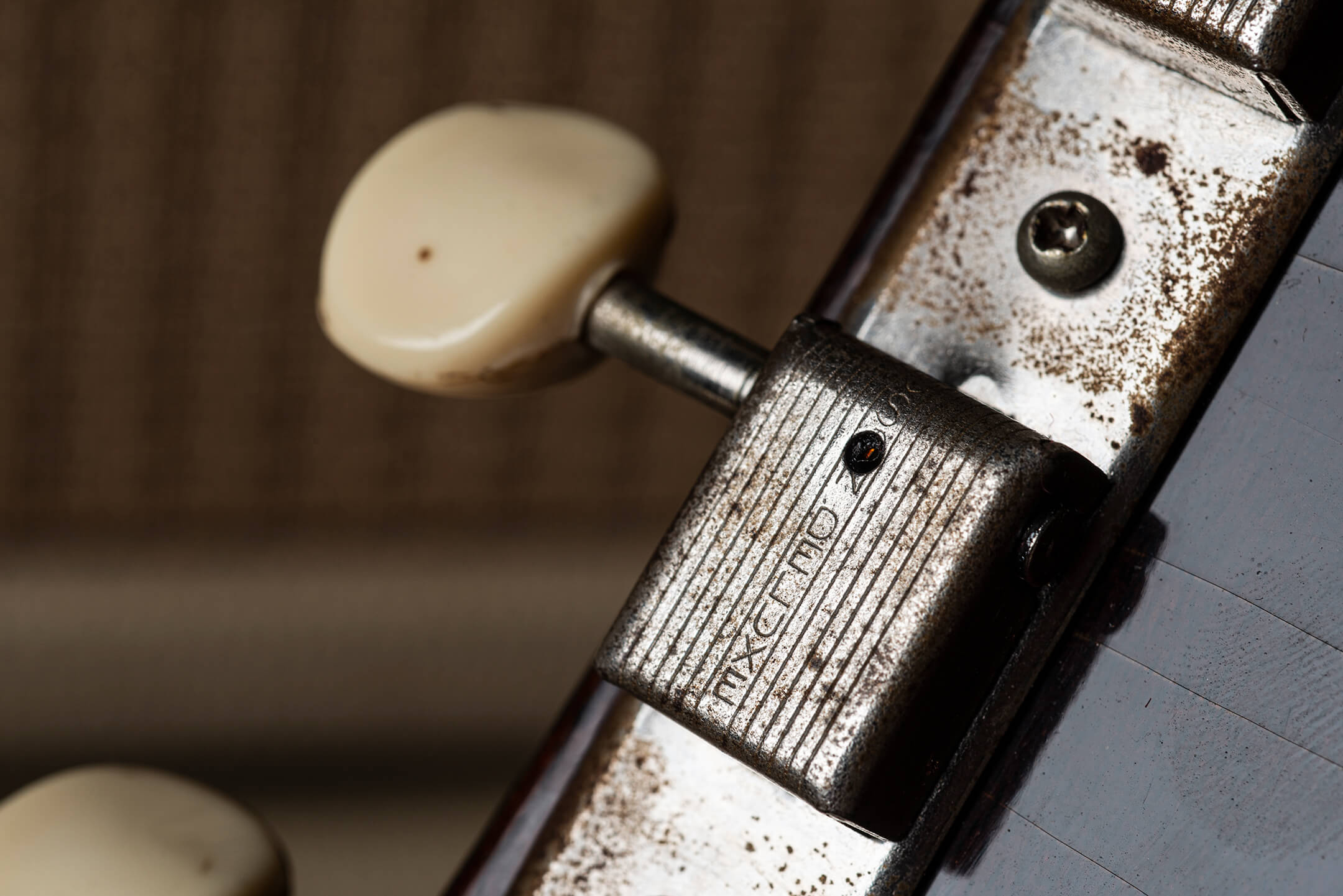 Some vintage J-45s and J-50s of the adjustable bridge era have been converted with bone, ceramic and Tusq saddles. It’s probable that a saddle swap would enhance sustain, treble response and harmonic complexity, but the case for doing so is far from clear cut. In short, this guitar is a one-stop solution if you hope to emulate those fantastic Gibson acoustic tones heard on so many classic recordings.

Yes, there’s a muted quality and, from a player’s perspective, it’s not especially loud, but the J-50 projects into a room very nicely and doesn’t overpower a singer. The shorter sustain also provides rhythm parts with percussive drive and brings superb clarity to intricate fingerpicking. Microphone tests also demonstrate that it’s extremely easy to record and sits in mixes without cluttering anything up.

This guitar may have had some minor issues in the past, but we feel that its best years lie ahead. It has a charming old-school tone, but doesn’t sound dated at all. The warmth, intimacy and gentle dynamics are extremely player-friendly and it’s one of those guitars that is almost impossible to put down.