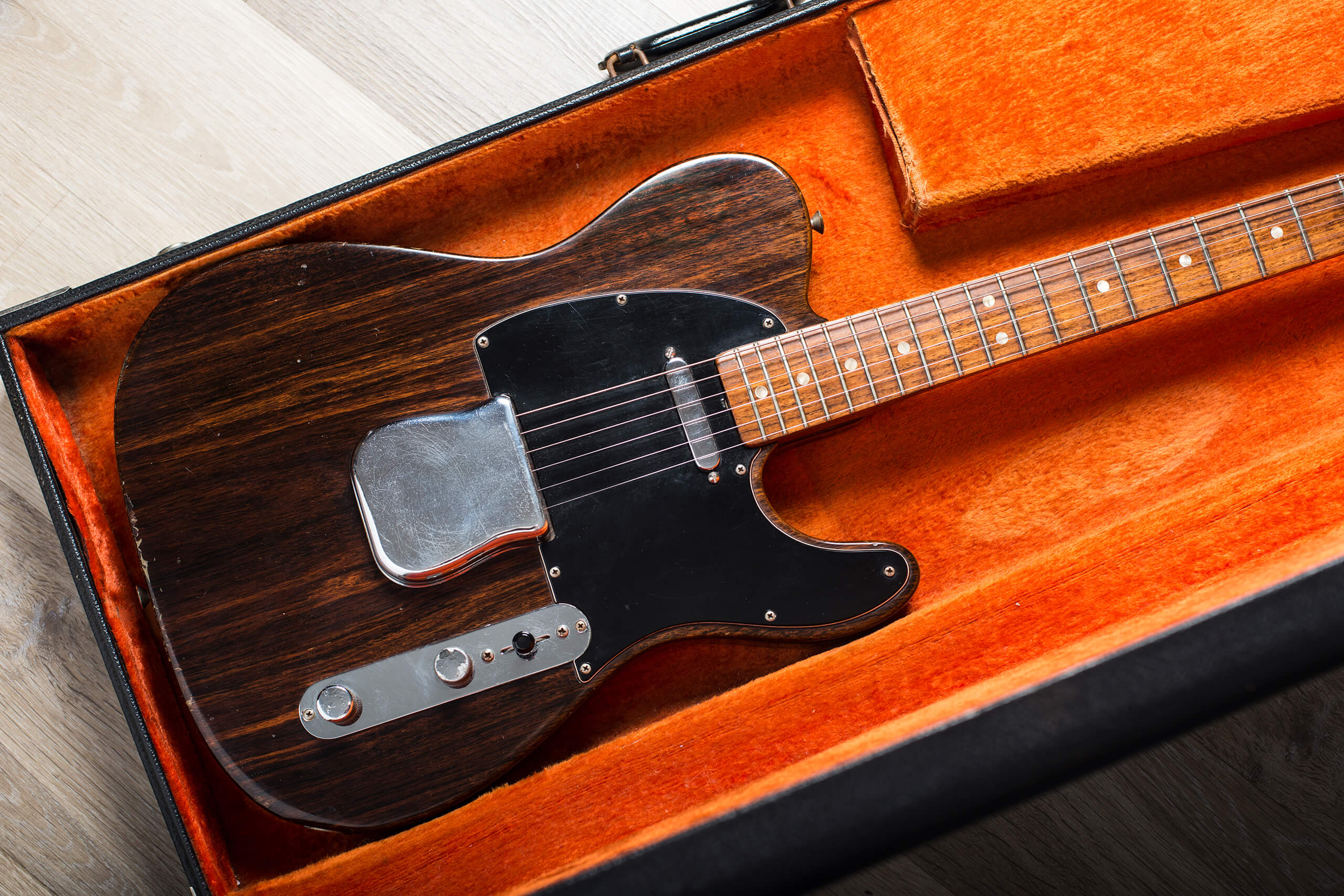 Late-1960s Telecasters are not especially rare or collectable – unless, of course, they happen to have a rosewood body and neck like the guitar George Harrison played on the roof of the Apple building in 1969.

The superb sonic qualities of rosewood have long been known to acoustic guitar makers, but rosewood is usually deemed unsuitable for electric guitar bodies because it’s too heavy and expensive. However, the latter isn’t much of a concern when you’re making a handful of instruments for some of the biggest names in contemporary music.

That’s certainly how it must have seemed to Fender when employees Roger Rossmeisl and Phil Kubicki were tasked with building some very special instruments indeed. According to most accounts, four Rosewood guitars were made initially: two Stratocasters and two Telecasters. The best of the Strats was earmarked for Jimi Hendrix, but he died before it could be presented to him. According to some accounts, Elvis returned his Telecaster because it was so heavy – and a Rosewood Tele said to have been sent to The King went unsold at auction in 2018. 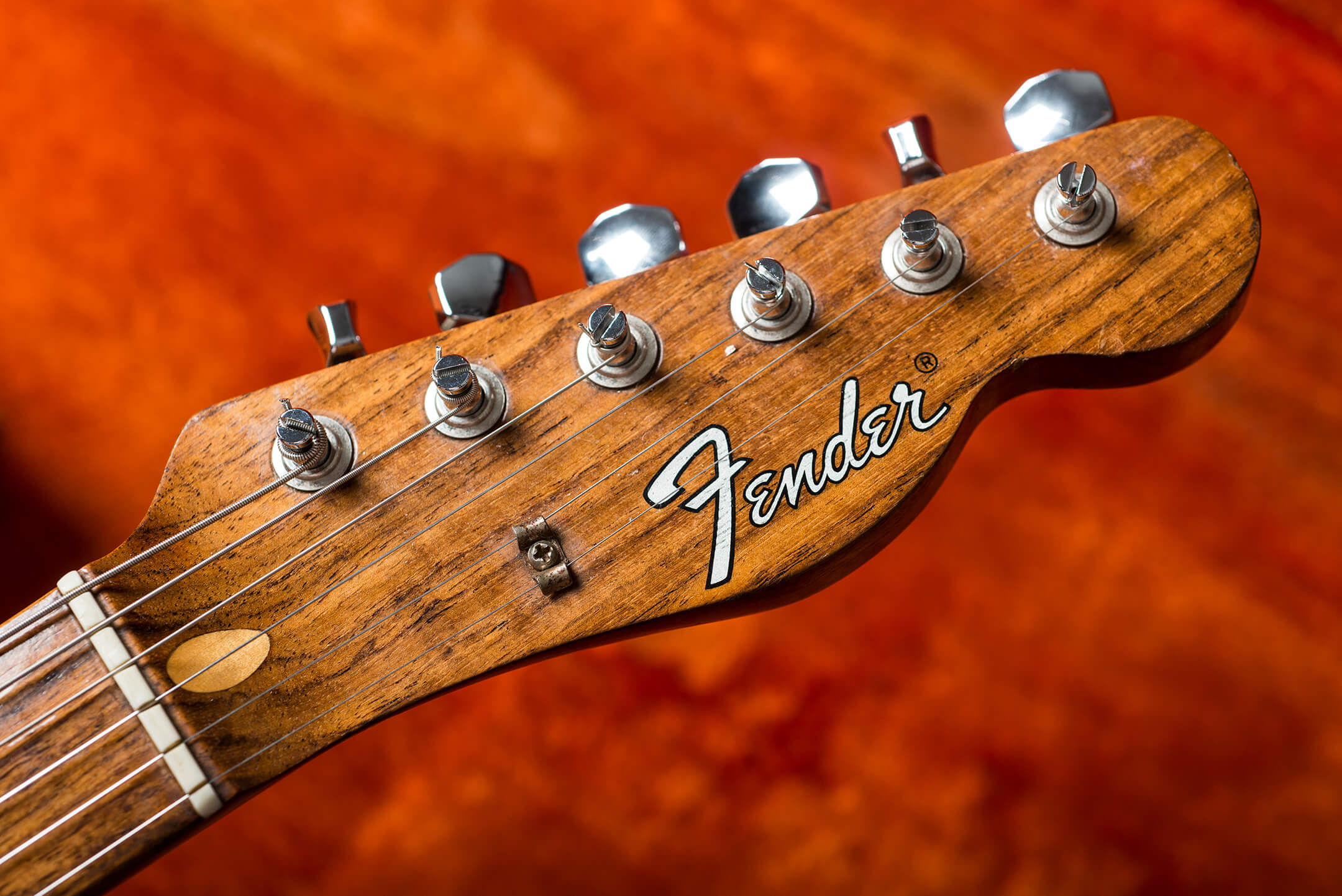 Fender’s head of sales, Don Randall, had been trying to get the company’s instruments and amplifiers into the hands of The Beatles for some time, but Brian Epstein was notoriously prescriptive about the equipment his charges could be seen using. After Epstein’s death, Randall finally secured a meeting at Apple HQ and an agreement was made to supply The Beatles with a load of Fender gear – including a Rosewood Telecaster for George.

Randall’s meeting with The Beatles took place in summer 1968, and a courier boarded a London-bound plane with George’s Tele in the seat next to him later that year. George famously used it on Let It Be and the rosewood Tele can be seen throughout the film documenting the sessions, along with the rooftop concert that would prove to be the group’s final public performance. 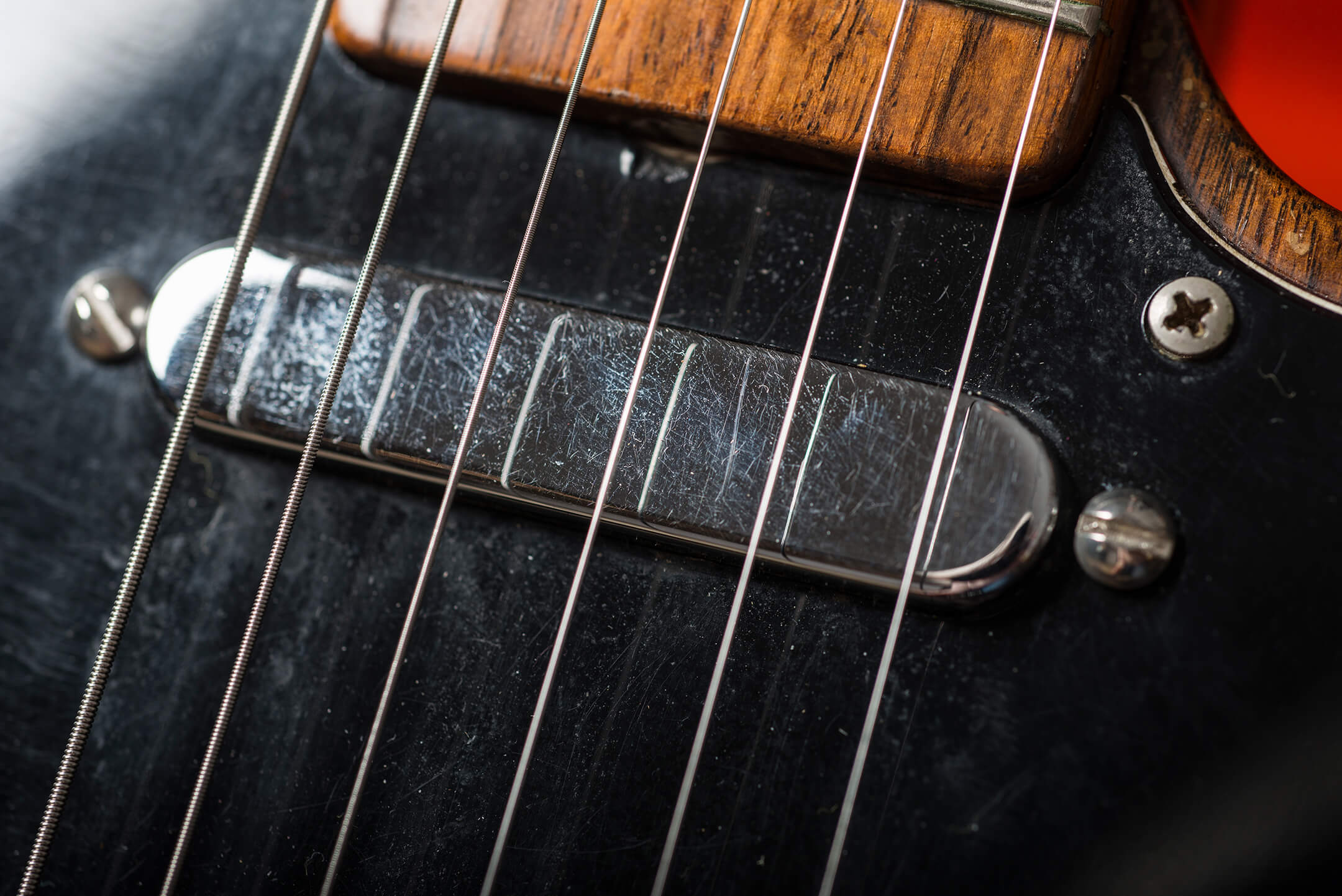 In the manner typical of rockstars of that era, George gifted the Rosewood Tele to Delaney Bramlett in 1969. Bramlett eventually sold it at auction in 2003 and the guitar is now owned by George’s widow Olivia.

The initial run of guitars can be considered prototypes and only the Telecaster went on to become an official production model. It was launched in 1969 but only lasted a couple of years, and there were several points of difference between the prototypes and production models such as the 1969 example featured here. 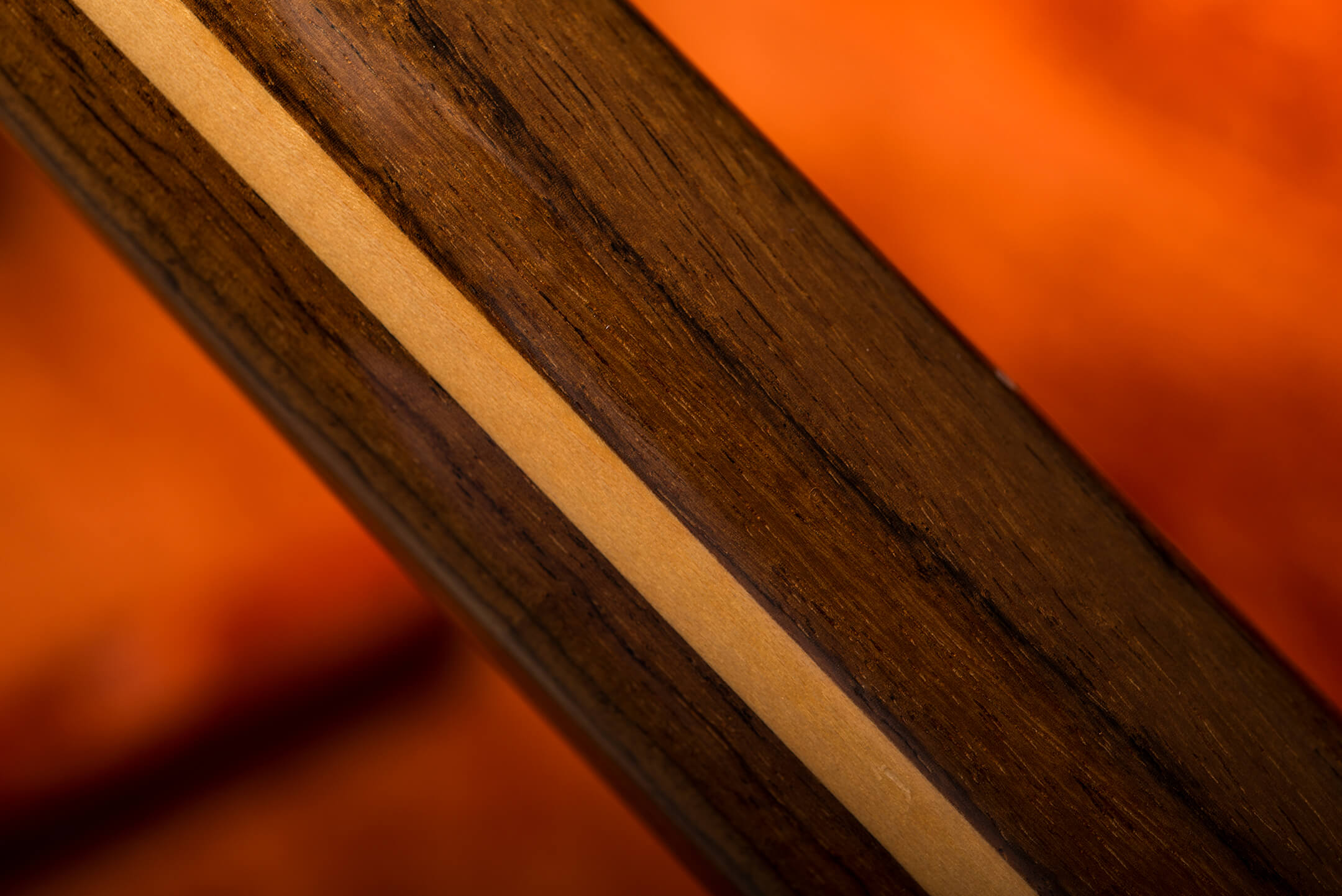 The most obvious is that George’s guitar had a satin finish but our Rosewood Tele has a gloss poly paint-job that would have been standard in 1969. Compare the necks and you’ll notice that this guitar has a contrasting maple headstock plug and skunk stripe along the back. It’s significant because it indicates that Fender returned to making 1950s-style one-piece Telecaster necks. When George’s Rosewood Tele was made, rosewood veneer boards were standard and ‘maple necks’ could be custom-ordered with the maple fingerboard glued on. George’s must have had either a rosewood veneer or slab ’board.

“It’s fatter and warmer than a Thinline, but it’s still every inch a late-1960s Telecaster”

Less obvious is the fact that Fender did something to minimise the weight issue, and given Rossmeisl’s background at Rickenbacker and his design work on the Telecaster Thinline in 1968, you might be able to guess what that was. 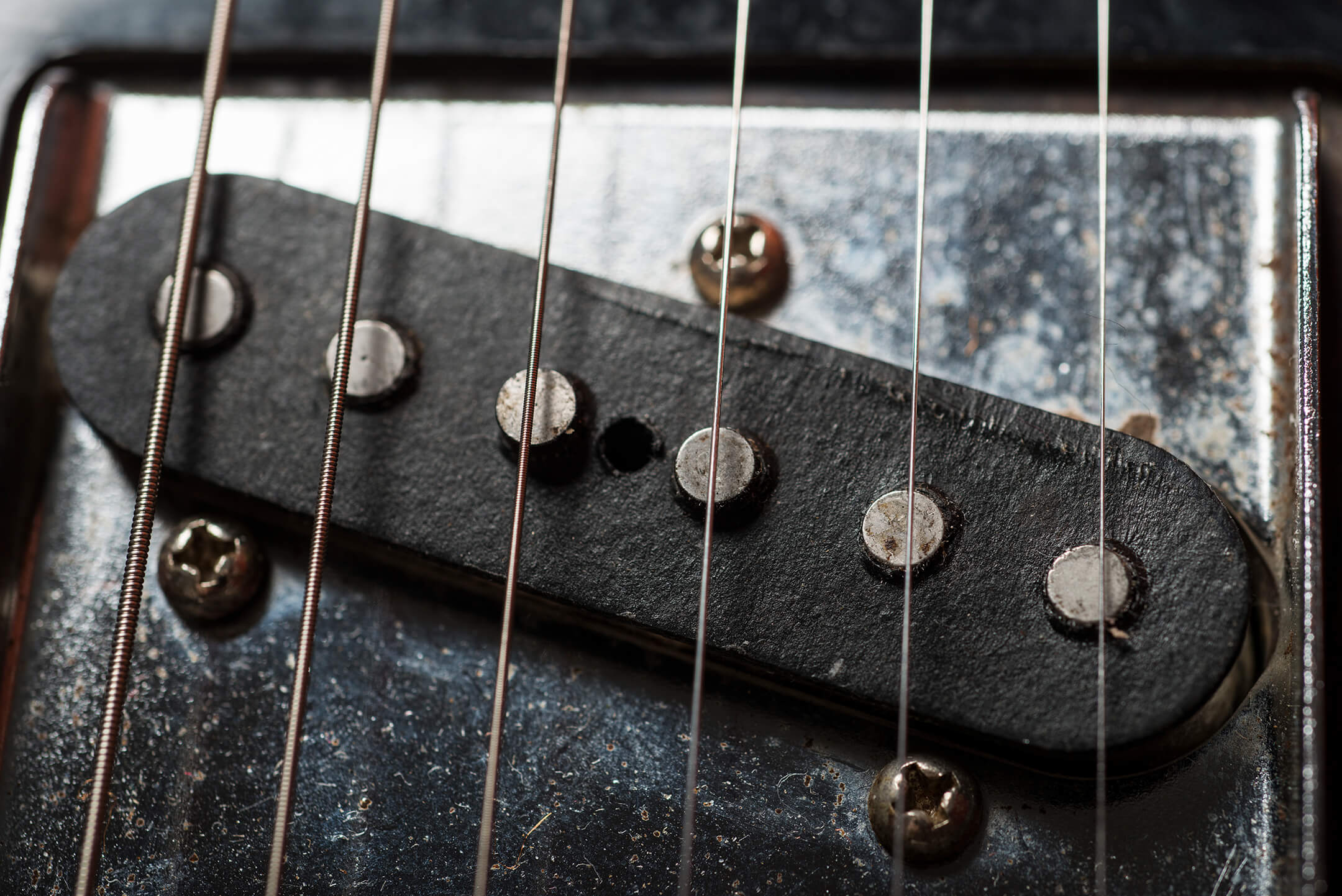 Production Rosewood Teles had chambered bodies and this example weighs in at a very comfortable 3.55kg – the guitar given to Elvis is reported to have tipped the scales at 5.9kg. The Fender Custom Shop’s video of the Harrison Tele reveals it was made from four pieces of Indian rosewood jointed together with a thin layer of maple in between.

Our Telecaster body is almost certainly made with two pieces of rosewood and the grain lines are carefully arranged to create a mirror-image effect each side of the maple line. Despite the fact the finish is on the road-worn spectrum, the look evokes sophisticated Scandinavian furniture of the era. It’s definitely more ‘Danish sideboard’ than ‘Bakersfield bar-room bruiser’. 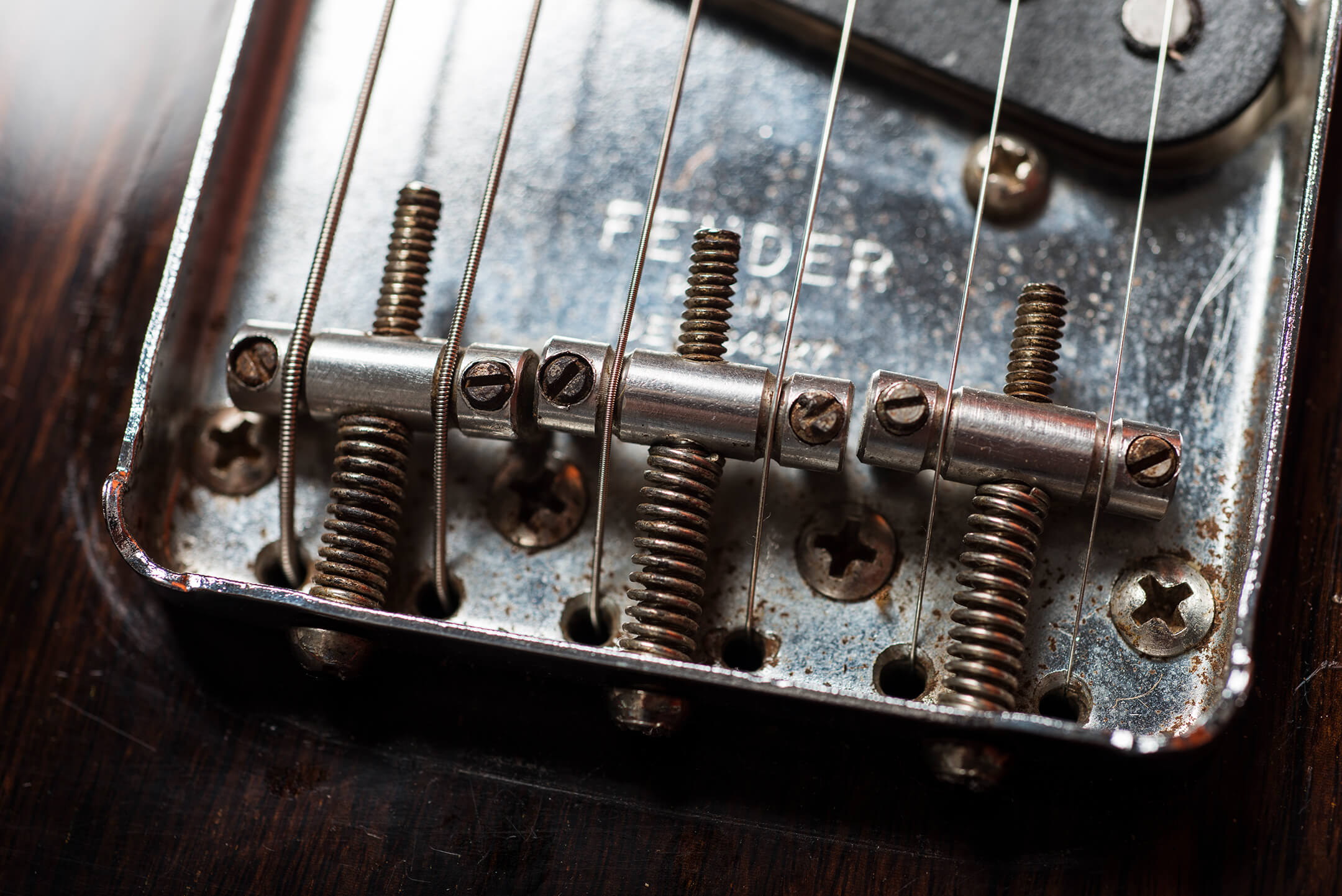 At some point the tuners have been changed, but current custodian ATB Guitars has refitted original F-stamped tuners and vintage bushings. The telltale signs are some rash around the smaller vintage bushings and a couple of screw holes peeking out from the edges of the high and low E tuner casings.

This guitar still has its original frets and they are far from worn out. A light crowning might enhance playability a bit, but it’s not a big issue. Like all lacquered fretboards, this one shows some wear. It’s mostly confined to the bass side of the board under the E and A strings, which suggests its owner was ‘strictly rhythm’ and tended to favour barre chords. 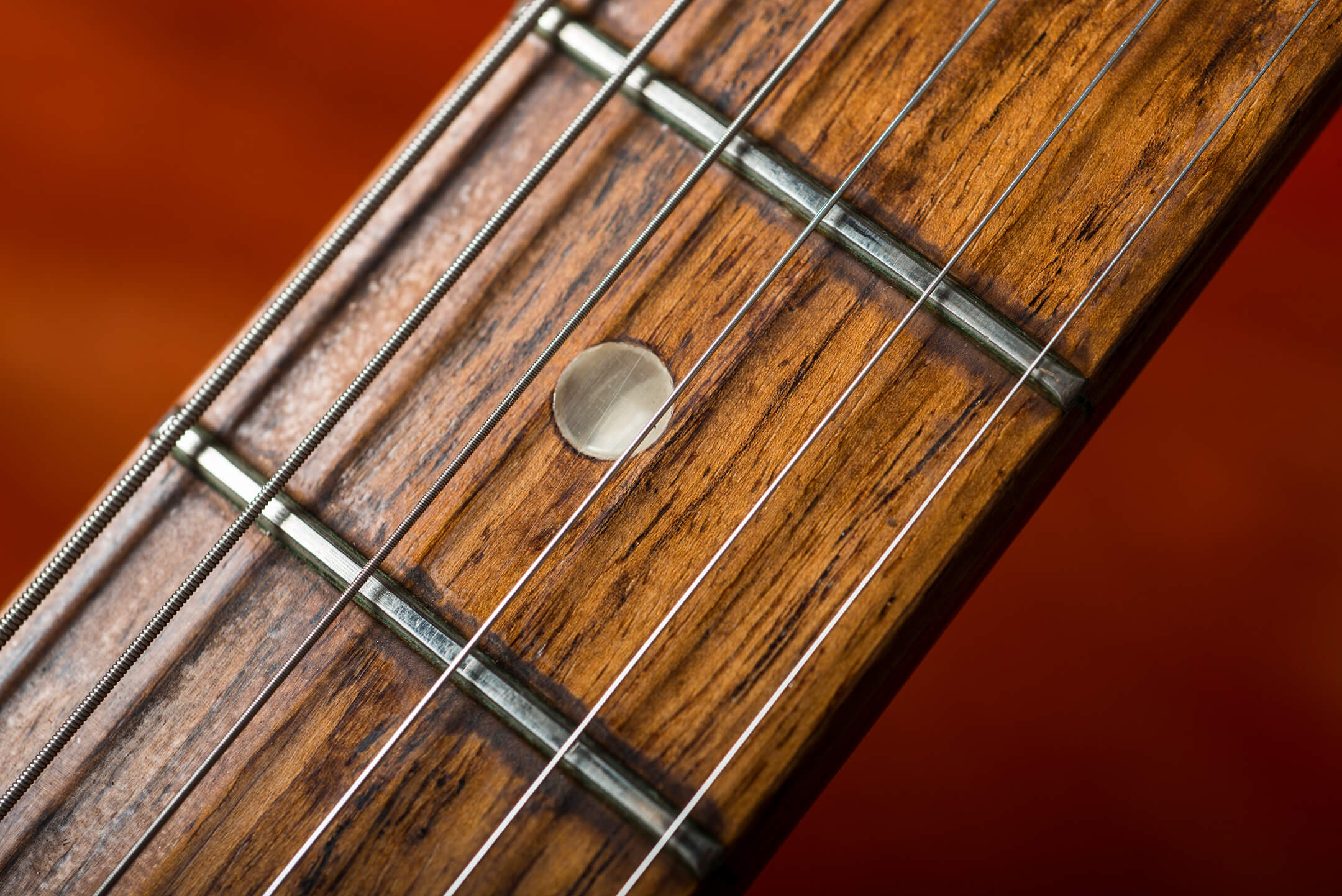 Lifting the control plate reveals extensive chambering inside the body, with the front thickness measuring about 7.5mm. The wiring all appears 100 per cent original, including the two yellow bridge pickup wires. The pickups look right too, with the white string wrapping the bridge coil looking unusually pristine.

The potentiometers are one-meg rather than the 250k. Fender instigated this change in 1969 so George’s Tele, with 250k pots and a solid rather than chambered body, would have had some significant sonic differences. If you’re chasing George’s late Beatles tones specifically, it’s worth bearing that in mind.

There’s also some case candy, in the form of a 1984 receipt from Dadi’s Music House in Paris for 12,000F, and a handwritten note proclaiming that the guitar was located in the South of France near Bayonne. 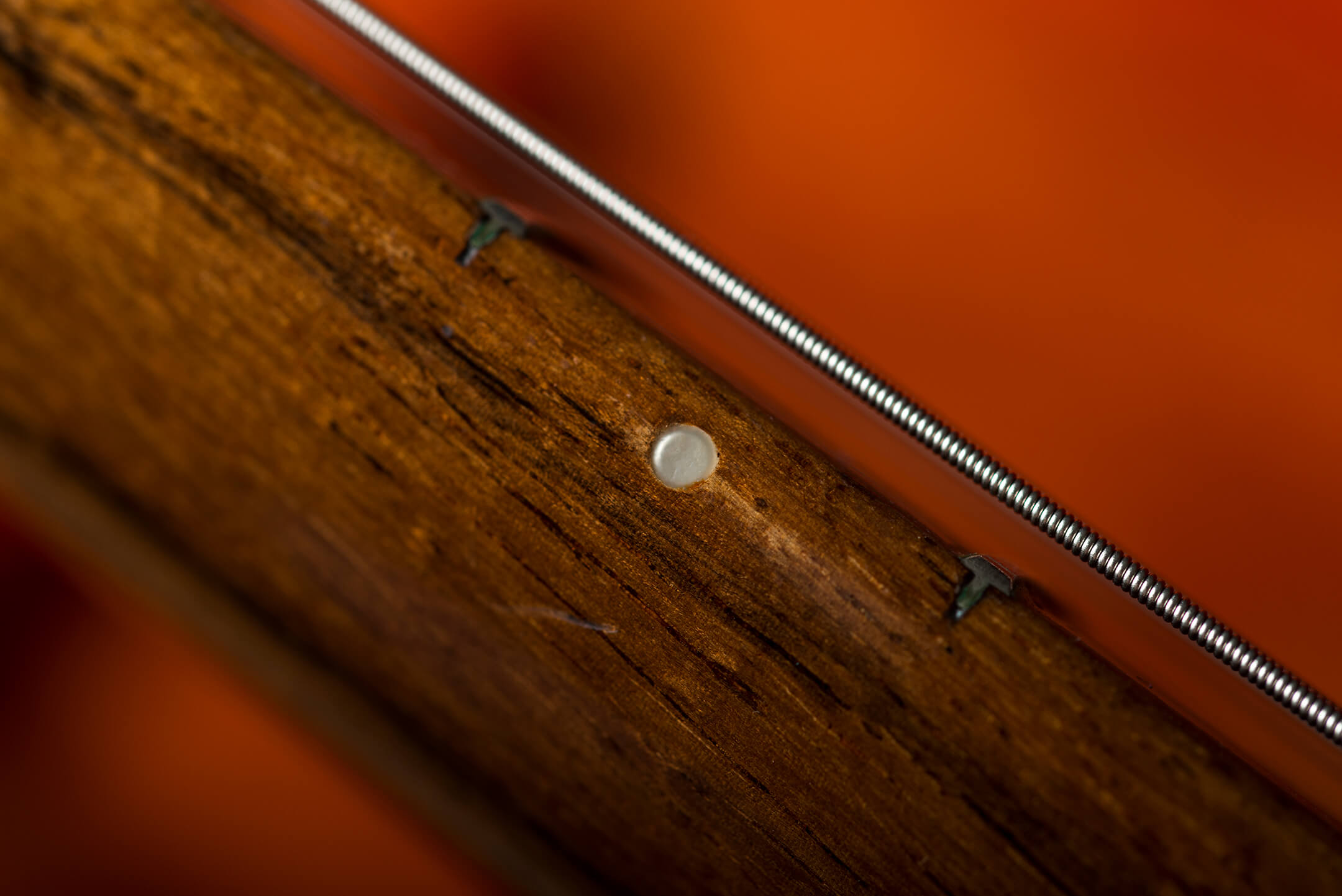 Although this is essentially a rosewood Telecaster Thinline sans f-hole, the chambering isn’t especially noticeable in the guitar’s unplugged tone. Instead, it sustains like a solidbody and has a clear chime as well as plenty of warmth in the low mids.

We have mixed feelings about the amped up sounds because the one-meg pots help with neck pickup clarity but bring out a wiriness from the bridge unit. It has a very quick response and it’s one of those Tele bridge tones that just cries out for a compressor. 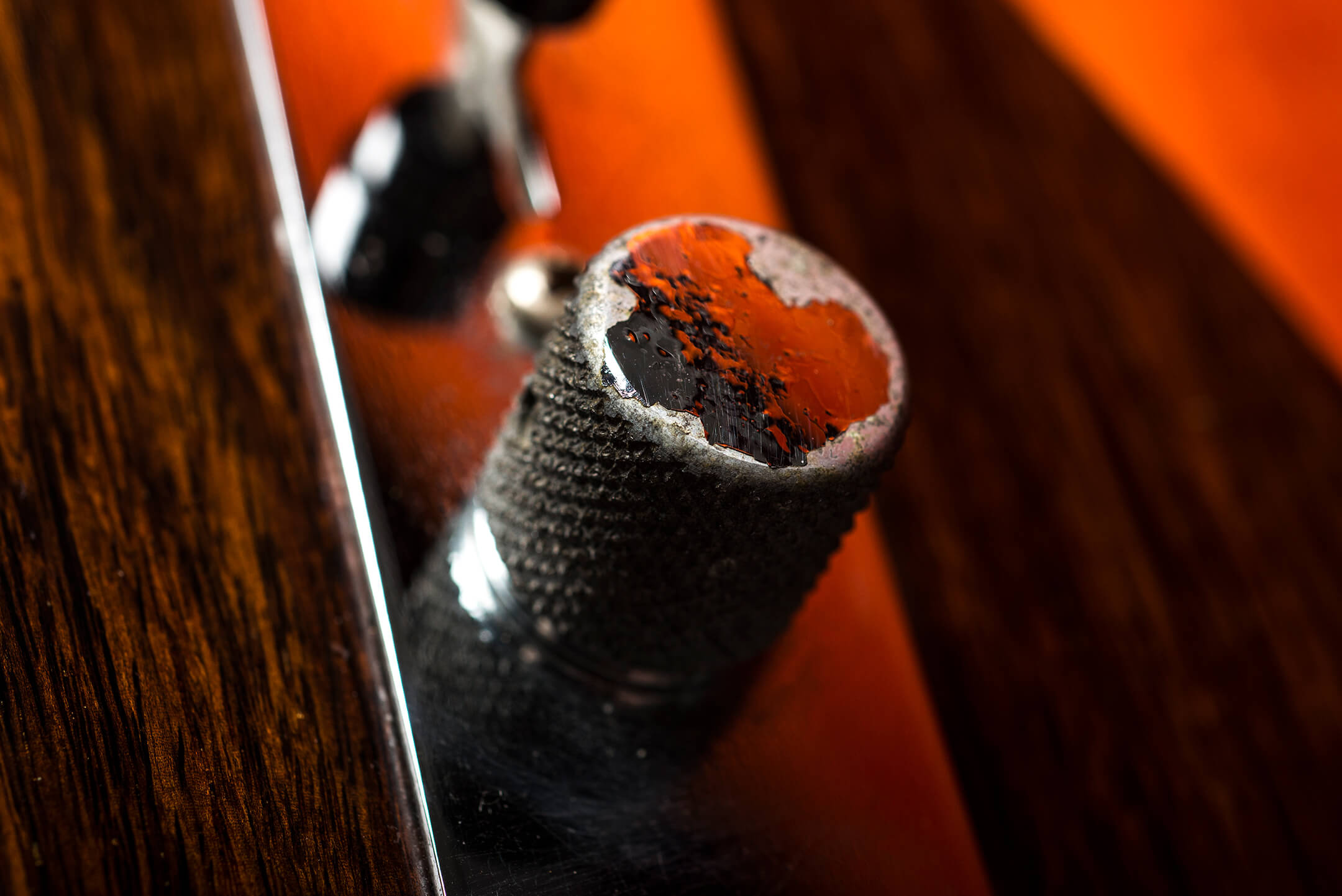 On balance we feel the rosewood has far more influence on the look than the sound, because there’s nothing radically different about this guitar’s sonic character compared to a traditionally appointed Telecaster of the era. It’s perhaps a little less punchy and aggressive than mid-60s solidbody Teles can be, and it’s fatter and warmer than a Thinline, but it’s still every inch a late 1960s Telecaster.

The full and rounded neck profile delivers a really lovely playing feel and it sounds like a very nice but unexceptional old Tele. With 250k pots it could be an even better one, but it’s almost entirely the rarity of the rosewood that makes this guitar so special.