Gear Of The Year: Best affordable electric guitars of 2019

Ten of our favourite affordable electric guitars of the year, starring the Fender Vintera range, a super Sterling by Music Man and a Chapman Strat-style guitar. 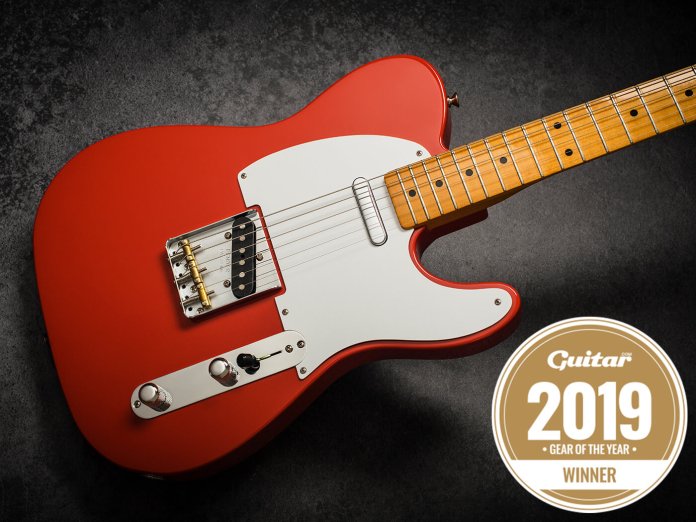 Whether your Tele tone tastes veer towards Bloomfield or Bakersfield, there’s plenty of cut with this Fender offering. It’s the desirable, musical kind though, it’s largely thanks to its pair of Tim Shaw-designed alnico V single-coils. Add the kind of characterfully chunky neck you don’t see too often at this end of the market, and you’ll realise it’s every inch a serious guitar.

WE SAID Of the 21 instruments in Fender’s new MIM Vintera range, it’s the ’50s Telecaster that we’d take home. 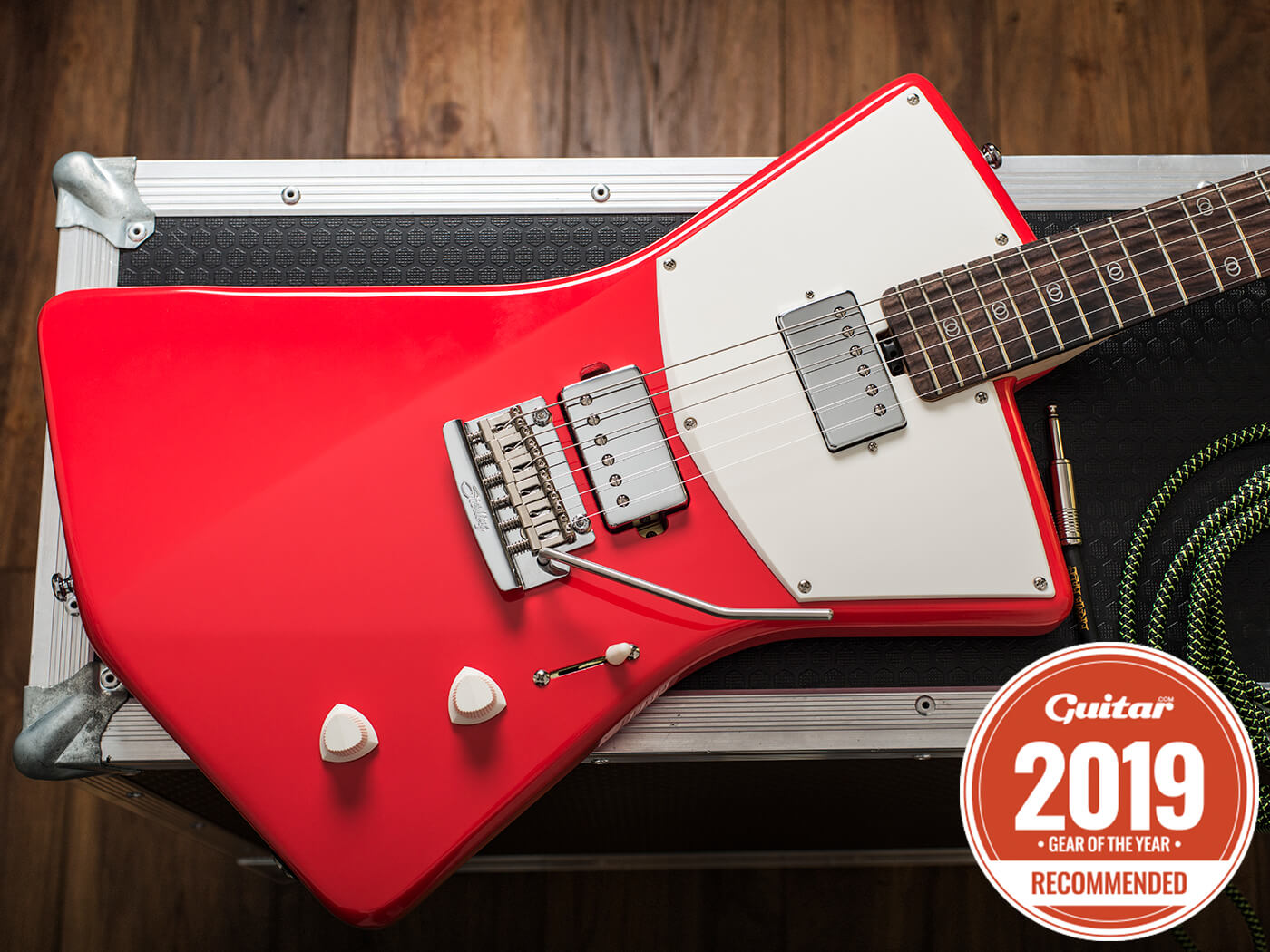 Music Man’s St. Vincent signature model is one of the most important and striking artist collaborations of recent times. Users of dense fuzz or lots of ambience will appreciate the way the treble response stops everything turning into inarticulate mush, but it’s equally useful for breathing life into more traditional classic- and alternative-rock overdrive tones. Outside of the versatile full-humbucker voices in positions one, three and five, position two’s combination of the outer coils has springy, Telecaster-like tones in abundance, while position four’s inner-coil combo has a Gretsch-like jangle with an almost semi-acoustic character.

WE SAID With stellar playability and tones, this sensibly-priced, distinctive signature instrument is very close to greatness. 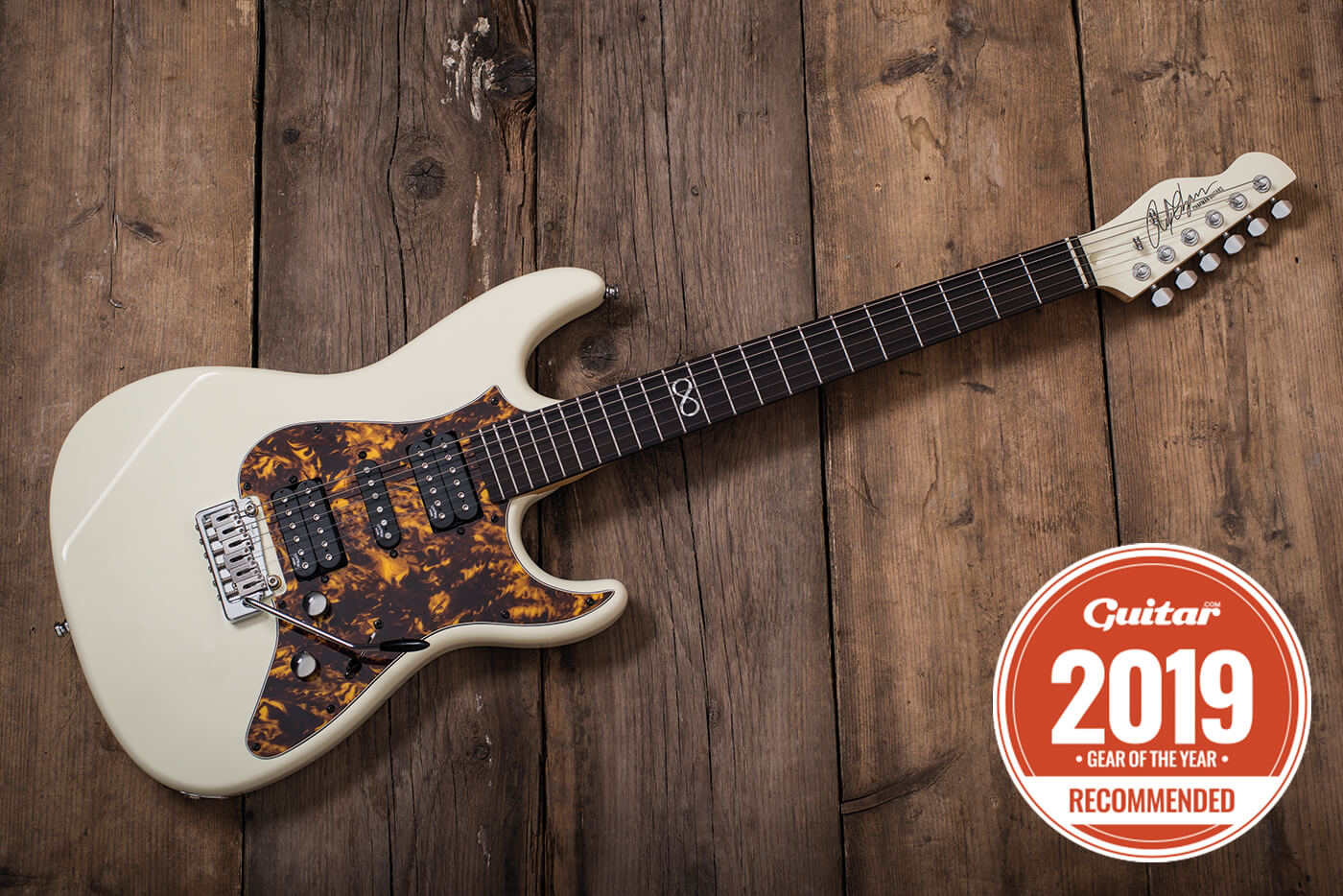 Rob Chapman, YouTube sensation and co-founder of Chapman Guitars, set out to create a signature guitar for his onscreen partner Lee Anderton back in 2013. Based on the latter’s 1986 partscaster, the CAP10 has been a stalwart in the brand’s stable up until 2016, but this current incarnation was only released late 2018.

Many guitarists aren’t particularly keen on humbuckers in Strat-style guitars as they can sound a little unwieldy at times, so the relatively measured and controlled output of the Chapman pickups compared to full-on metal pickups – may appeal to those players. In contrast, the neck humbucker is a little more dynamic than its counterpart and, while meaty on high-gain settings, still has enough poke and punch to remind you of its primary Strat influence.

WE SAID A Strat-style guitar with a little more under the hood, the Chapman CAP10 is a must-try. 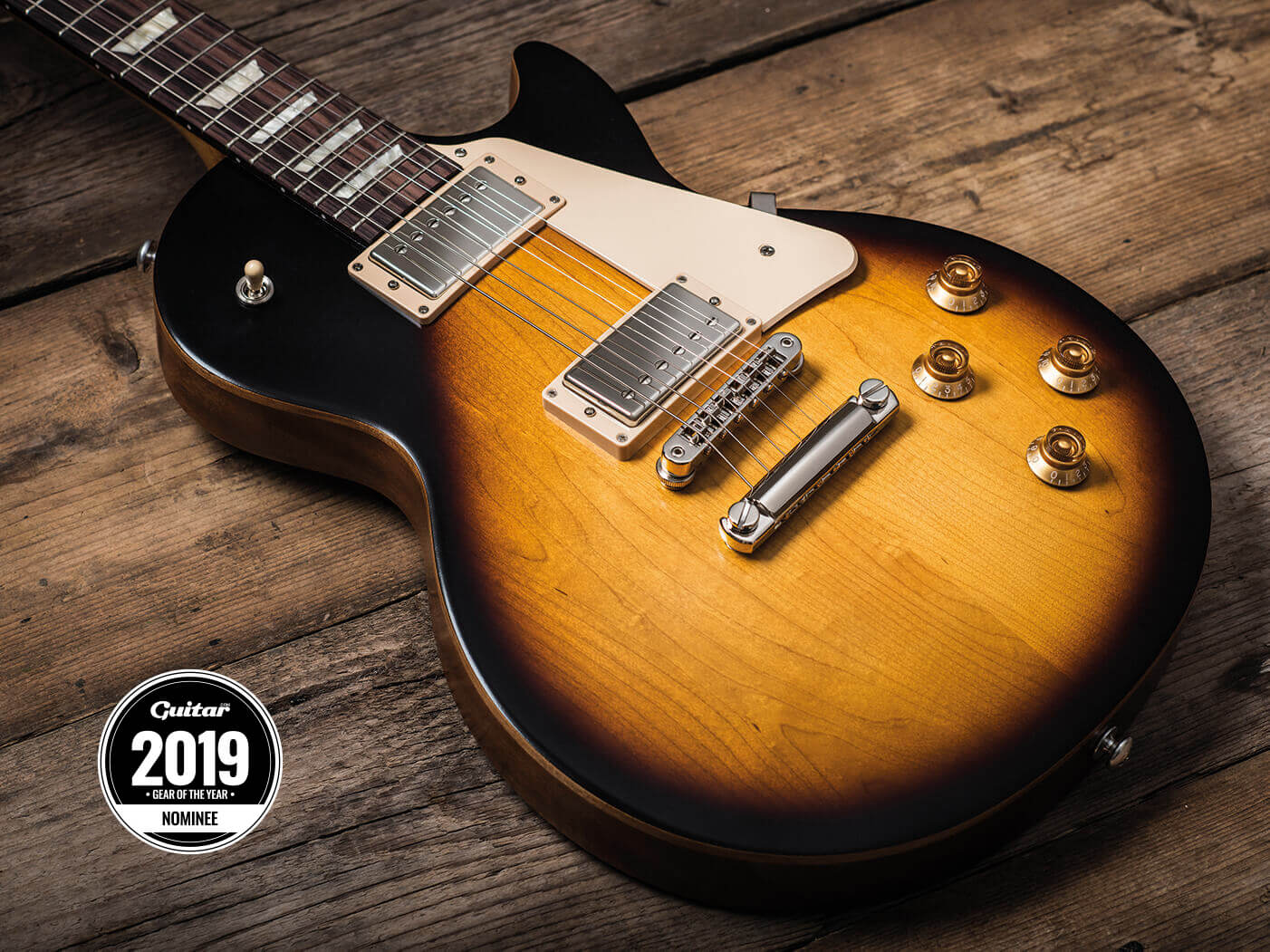 Gibson’s new revitalised Modern Collection, the Les Paul Tribute is an upgrade from the recent Les Paul Studio Tribute. This is far from a look-but-don’t-touch collector’s piece – it’s a real-world gigging guitar that’s stripped down but wears its heritage on its sleeve.

The Tribute’s maple neck and ‘ultra modern’ weight relief translate into an airy and enthusiastic performance that’s really appealing and although it lacks some of the midrange power of a solid-body, mahogany neck Lester, there’s plenty of sustain – and many guitarists today will prefer its breezier sound.

WE SAID It’s simply a well-put-together, fuss-free instrument that does exactly what it’s supposed to and can cover a lot of ground. 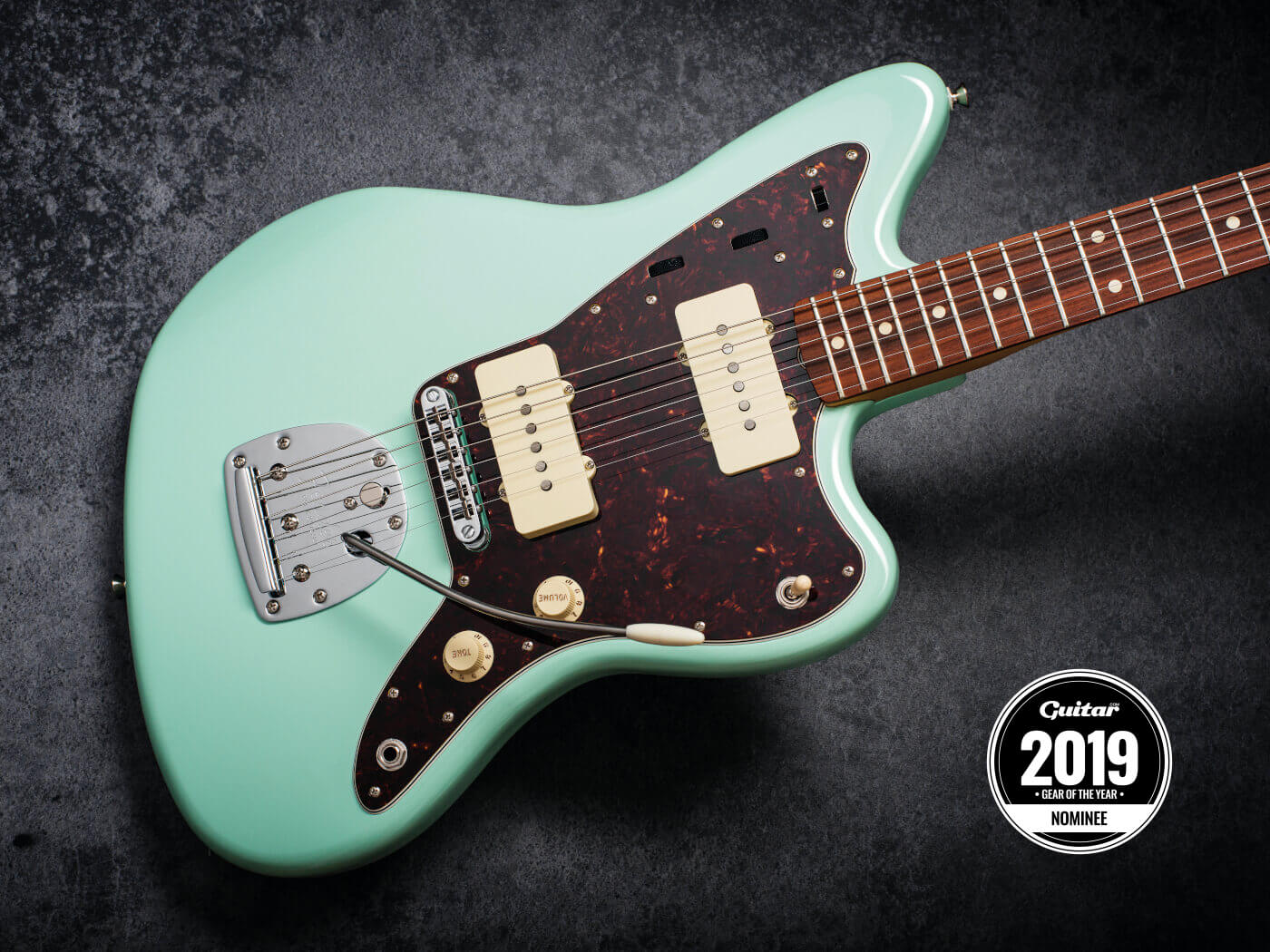 Where the ’50s Telecaster attempts to recreate the magic of the decade, the Modified Vintera guitars throw more modernity into the mix, as evidenced by the ’60s Jazzmaster. It shifts the vibrato tailpiece closer to the bridge, increasing the break angle and therefore sustain, while a modern ‘C’ neck profile and 9.5-inch fingerboard radius offer a less old-school playing experience. And don’t discount that rhythm circuit: it’s smooth and moody rather than muddy and hugely enjoyable into ambience as well as fuzz.

WE SAID There’s a range of beguiling sounds on tap that are simultaneously classic and contemporary, with enough air in the pickups that they don’t sound overcooked. 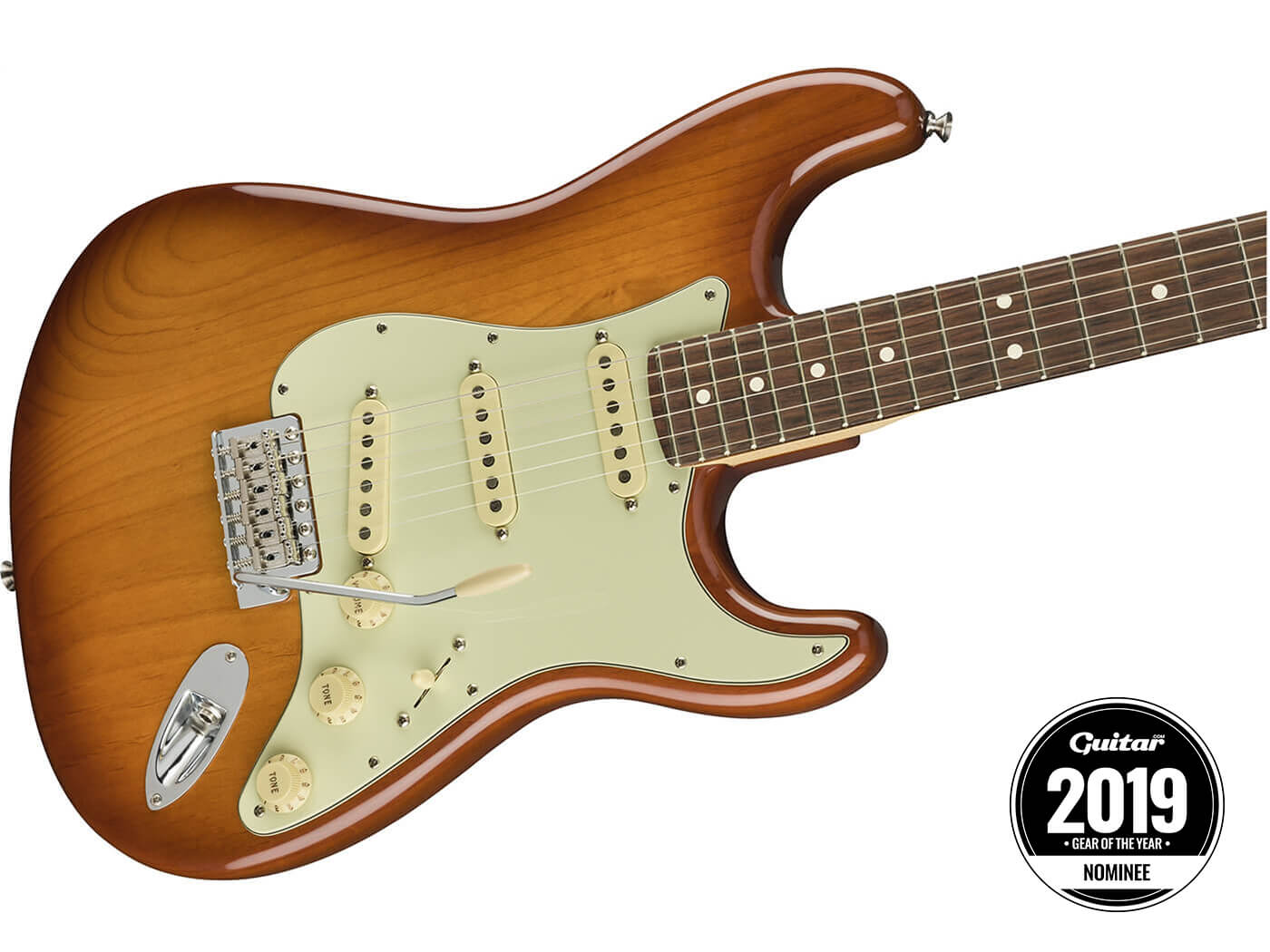 The Performer designs are mash-ups of various eras of Strat and Tele evolution, so this Strat is 1970s at the end of its oversized headstock, but its alder body and mint ’guard offer more of a 1960s persona.

There are an awful lot of useful voices that come courtesy of the Yosemite pickups, also designed by Tim Shaw. The bridge unit can be softened without losing upper harmonics via judicious use of its dedicated Greasebucket-equipped tone control, while pulling the pot and bringing the neck pickup into the mix is a great secret weapon for slippery pseudo-Tele soul tones.

WE SAID An affordable USA-made Stratocaster that borrows aspects of different eras, re-introducing them to the modern player. 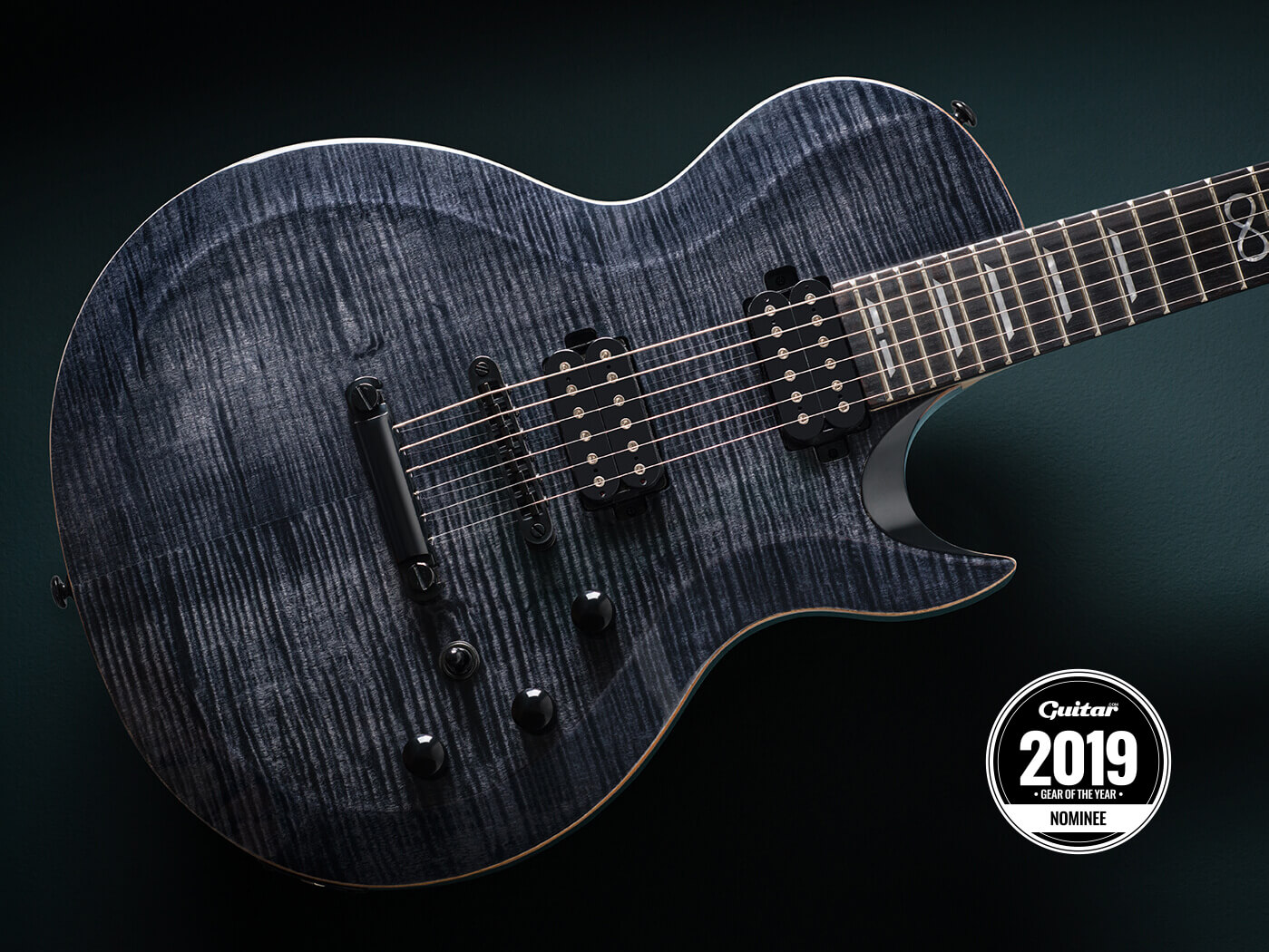 This year, Chapman Guitars introduced its V2 Standard series. The new guitars are still built in Indonesia, but now at a different factory: a move intended to address quality inconsistencies that the brand felt had dogged a small percentage of its original Standard series.

A/B’d with our PRS Singlecut loaded with Bare Knuckle Black Dog pickups through a Plexi patch on our Axe-Fx III, the V2 ML2 matches our reference guitar in terms of output. Where the PRS offers a moodier, darker tone, the Chapman possesses a snappier top-end clarity, thanks in part to its maple neck and ebony ’board.

WE SAID Modern in its design but relatively traditional in its sound, the ML2 is a worthwhile consideration for a high-octane blues-rock player. 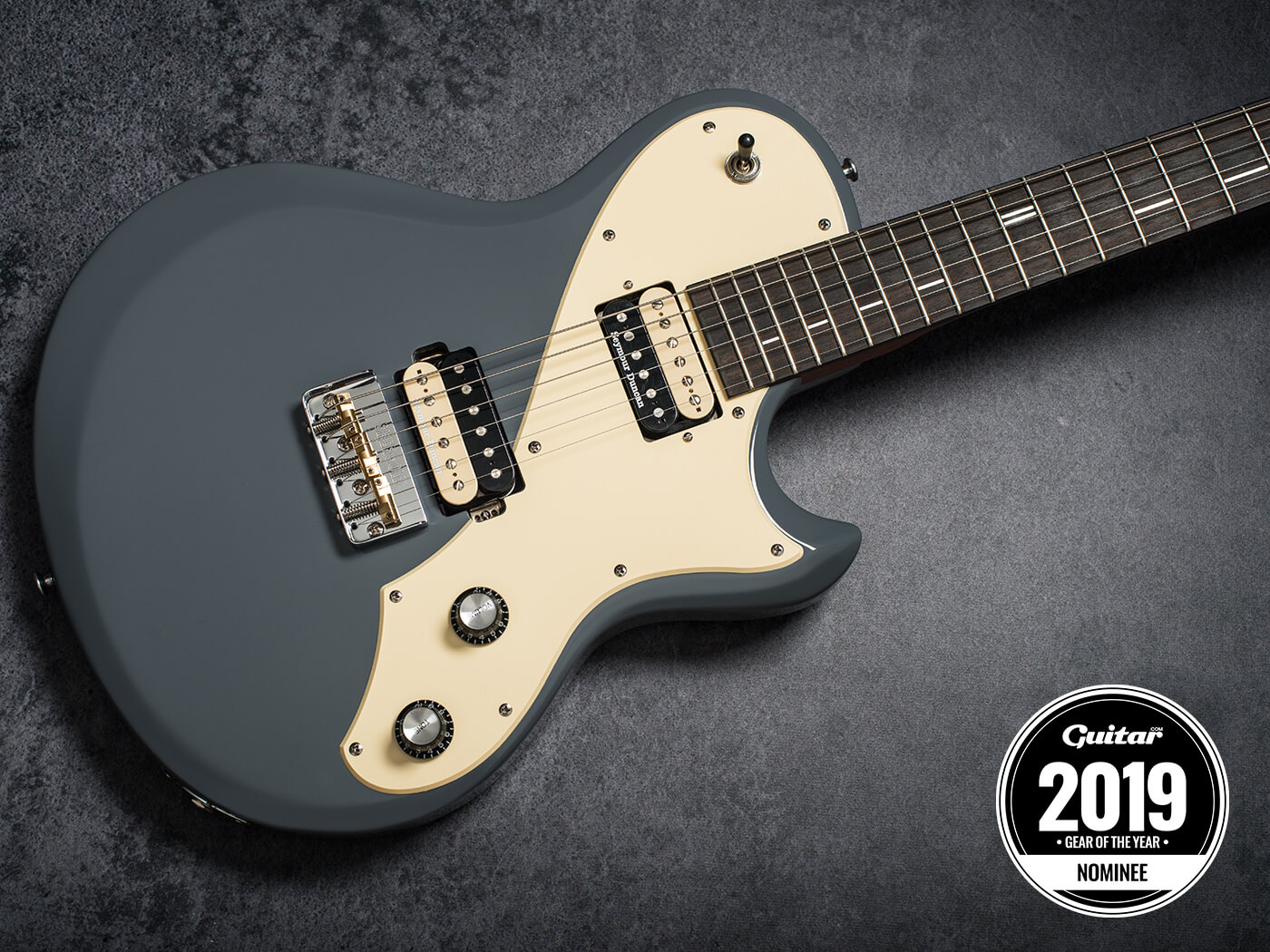 While the vibe on the Shergold Provocateur SP02-SD is definitely more Gibson than Fender, the strung-through Tele-style bridge and bolt-on neck certainly add some sparkle to the guitar’s acoustic resonance when played unplugged. It’s quite lively for a solidbody – always a good sign.

The Seymour Duncan ’59 humbuckers here offer a nice mix of high-output humbucker-y goodness with a modern sheen that begs to be paired with loads of gain. That said, the middle position is a welcome surprise: it has a warm, chiming tonality that’s perfect for gently picked clean lines and atmospheric effects, especially with the tone rolled back. Plus, there’s more versatility to be had by pulling up the tone pot and engaging the coil split.

WE SAID Excellent build quality, name-brand pickups and quirky stylings. It’s a rock-ready single-cut for the player who wants to be a little different. 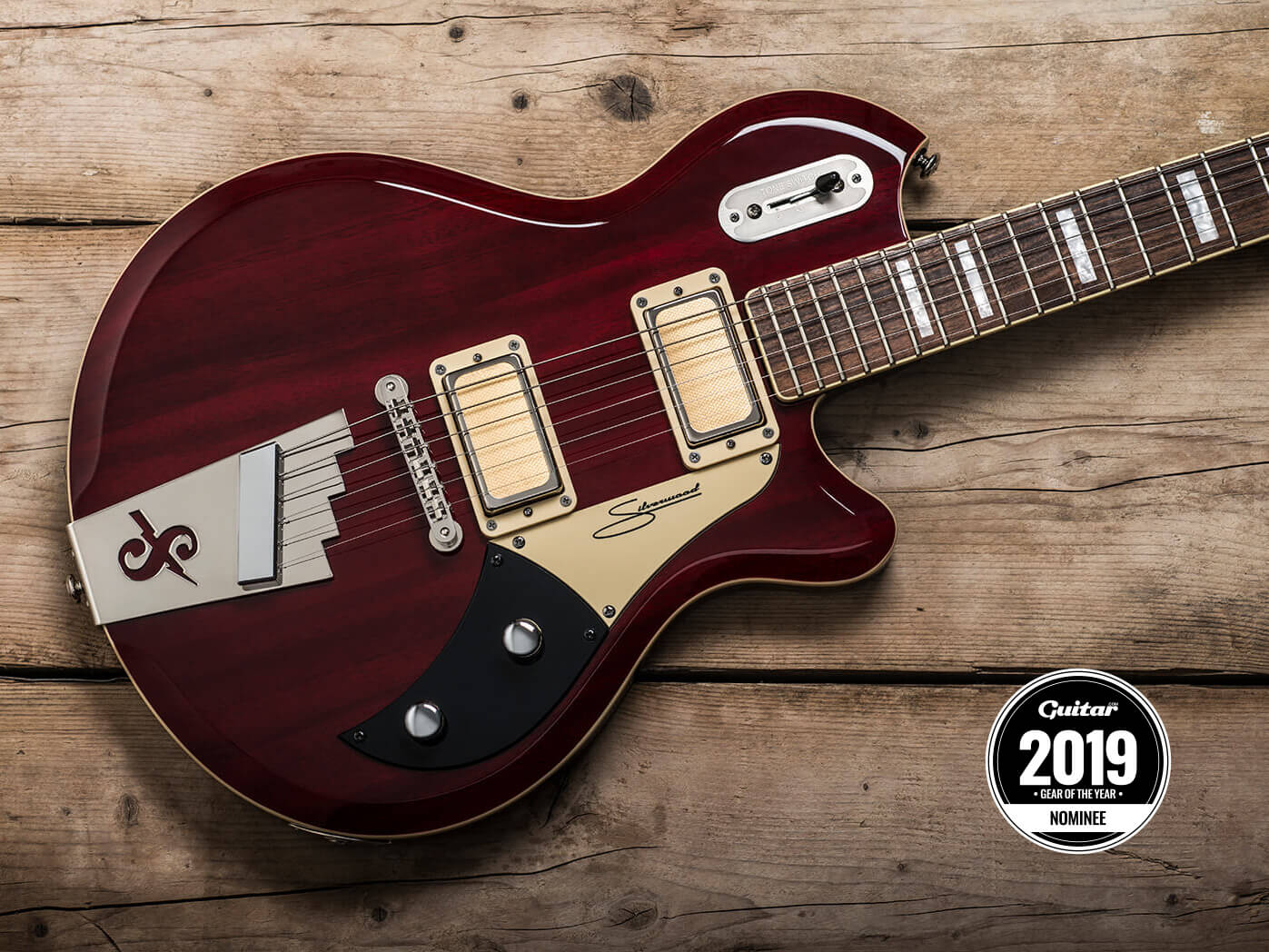 In the case of the 1296 Silverwood, Supro has veered towards playability and practicality over period-correctness. We think it’s a good call. Many original Supro guitars were blighted by a plethora of oddly placed and fairly impractical knobs and switches. Things are simplified here, with a single three-way pickup-selector switch combining with master volume and tone controls.

The Gold Foil pickups are an update on the Clear-Tone pickups of old: they’re humbucker sized and offers an unusual combination of hi-fi clarity and lo-fi attitude that gives the Silverwood bags of sonic character.

WE SAID It’s a product that ticks many of the boutique boxes, yet is available at a much lower and very tempting price point. 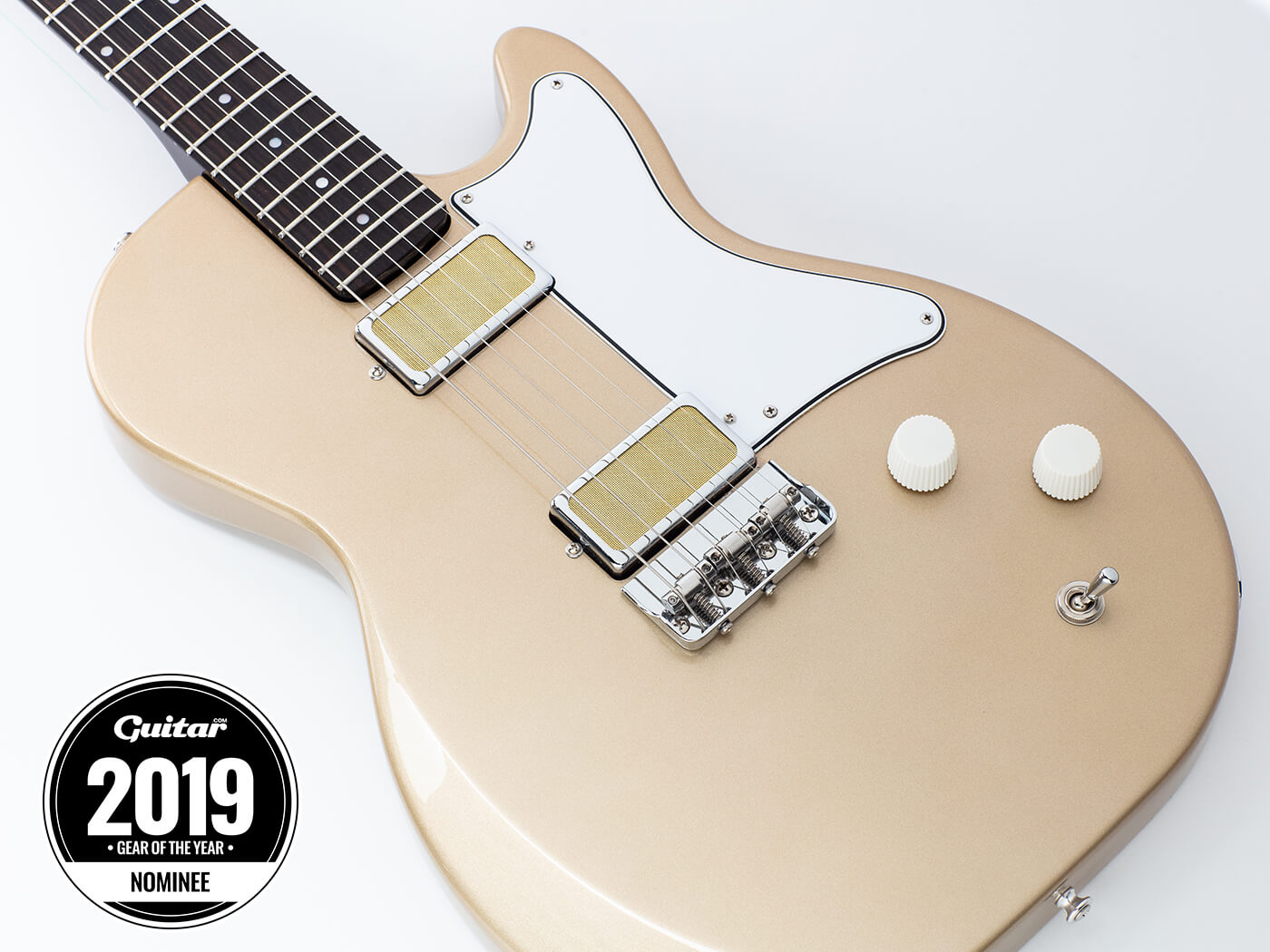 As one-third of Harmony’s new rebooted Standard Series, the Harmony Jupiter is a straightforward single-cutaway model that blends affordability, playability and stellar construction from being made in the iconic 225 Parsons St. factory in Kalamazoo. Two hand-wound Gold Foil humbuckers and a solid mahogany body provide the heft, while soft edges, body contours and a 12-inch-radius ebony fretboard keep things player-friendly.

WE SAID The Jupiter exudes creamy, vocal-like lead tones which do exhibit a bit of bite, but are otherwise surprisingly elegant and refined, though still adept at rocking pretty hard.