Gear Of The Year: Best premium electric guitars of 2019

These instruments may come with eye-watering price tags, but if you’ve got the dough, you’ll find no better electric guitars on the market today. 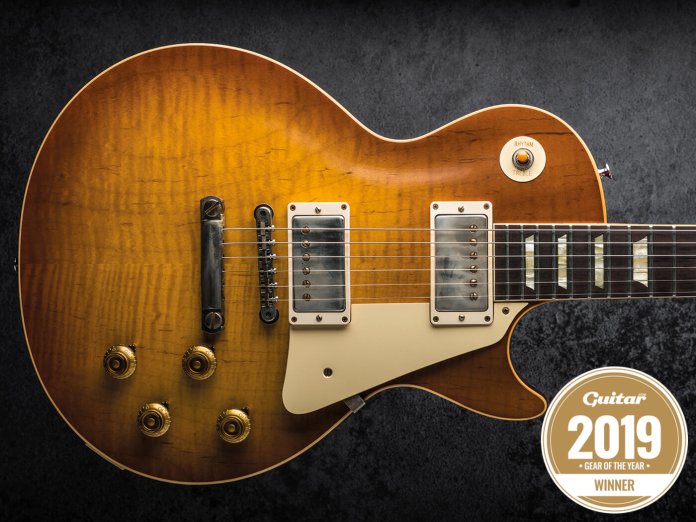 For most vintage-guitar collectors, sunburst Gibson Les Pauls from 1958-60 are the Holy Grails. And this Custom Shop take on the legendary ’59 is billed not as a tribute, but a ‘clone’. From period-correct hangtags to 3D-scanned top and neck carves and chemically recreated old-school plastics, the idea is to give Les Paul aficionados a guitar that ticks all the right boxes without costing as much as a house.

Without being shackled by heavy potting, the alnico III Custombuckers on the 60th Anniversary model have plenty of air in the high end. There’s an abundance of light and shade on tap thanks to volume and tone controls that have no shortage of usable, musical range.

WE SAID Overall, this is a dream guitar for most players and Gibson Custom has done a fine job of recreating a mid-century classic for the modern world. 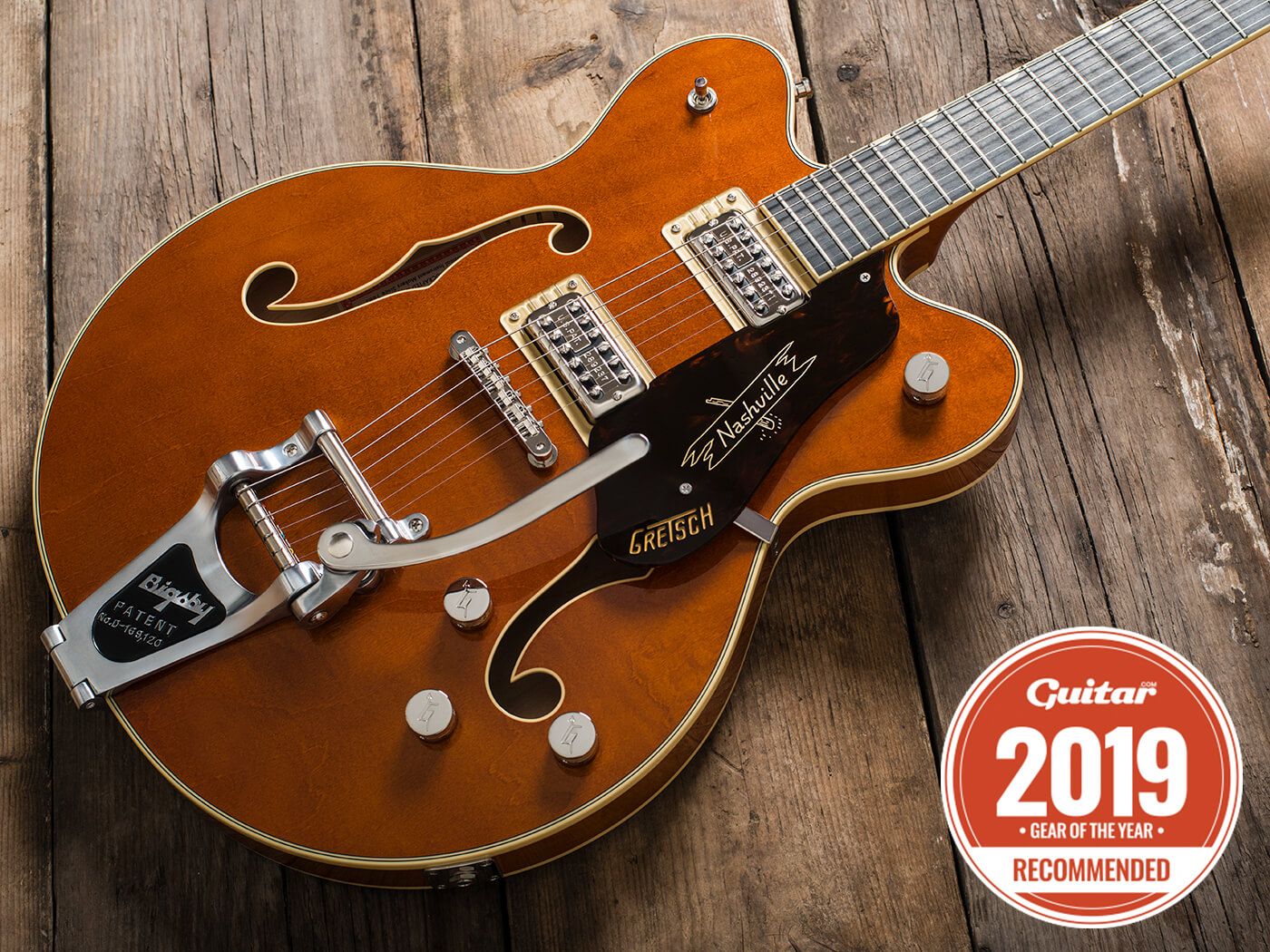 The G6620T delivers ‘that great Gretsch tone’ from a business-class seat – unlike the rollercoaster ride of old. Our favourite model in Gretsch’s NAMM 2019 collection, this instrument represents the brand’s newest evolution of its centre-block equipped, double-cutaway semi-hollow format.

Despite the myriad aftermarket Filter’Tron-style humbuckers available and the numerous in-house variations developed by Gretsch in recent years, we still think these High Sensitive pups have a lot to offer. Underrated and versatile, they can go from Johnny Marr to AC/DC, or George Harrison to Jack White in a heartbeat. It’s a great guitar for heavier alt-rock styles too, with a saw-toothed combination of power and grit that works brilliantly for aggressive QOTSA-style rhythms and white-knuckle lead. And, yes, it’ll still sing the blues. 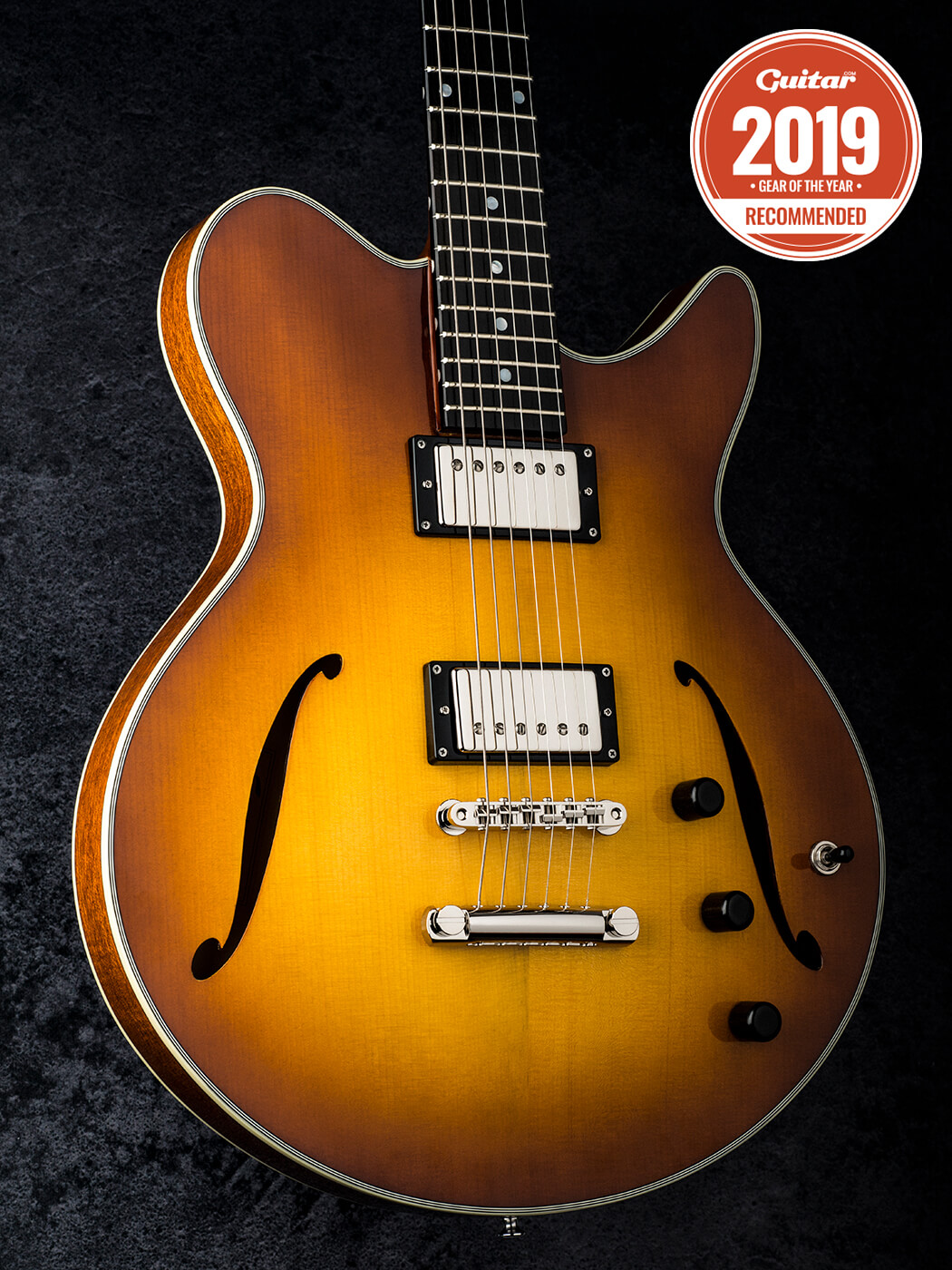 Versatile, handsome and soulful, there’s much to love about the Eastman Romeo. From the semicircular pearl side-dots to the ebony dome knobs and the straight-grain spruce top with its gorgeous Goldburst finish, the Romeo is an exercise in understated elegance.

The amplified tale of Romeo – it has two custom-voiced Lollar Imperials – is one of three distinct acts. At the bridge, you get a versatile blend of ES-335 and Telecaster with a raunchy twang. The hollower middle position on a twin-humbucker archtop tips the scales a little further towards Fender with a light, spanky flavour. But it’s in the neck position that this spruce-topped hollowbody is perhaps at its most predictable, as there are sophisticated blues and smooth fusion tones aplenty.

WE SAID Versatile and soulful, there’s much to love about this classy new original hollow body design from Eastman. 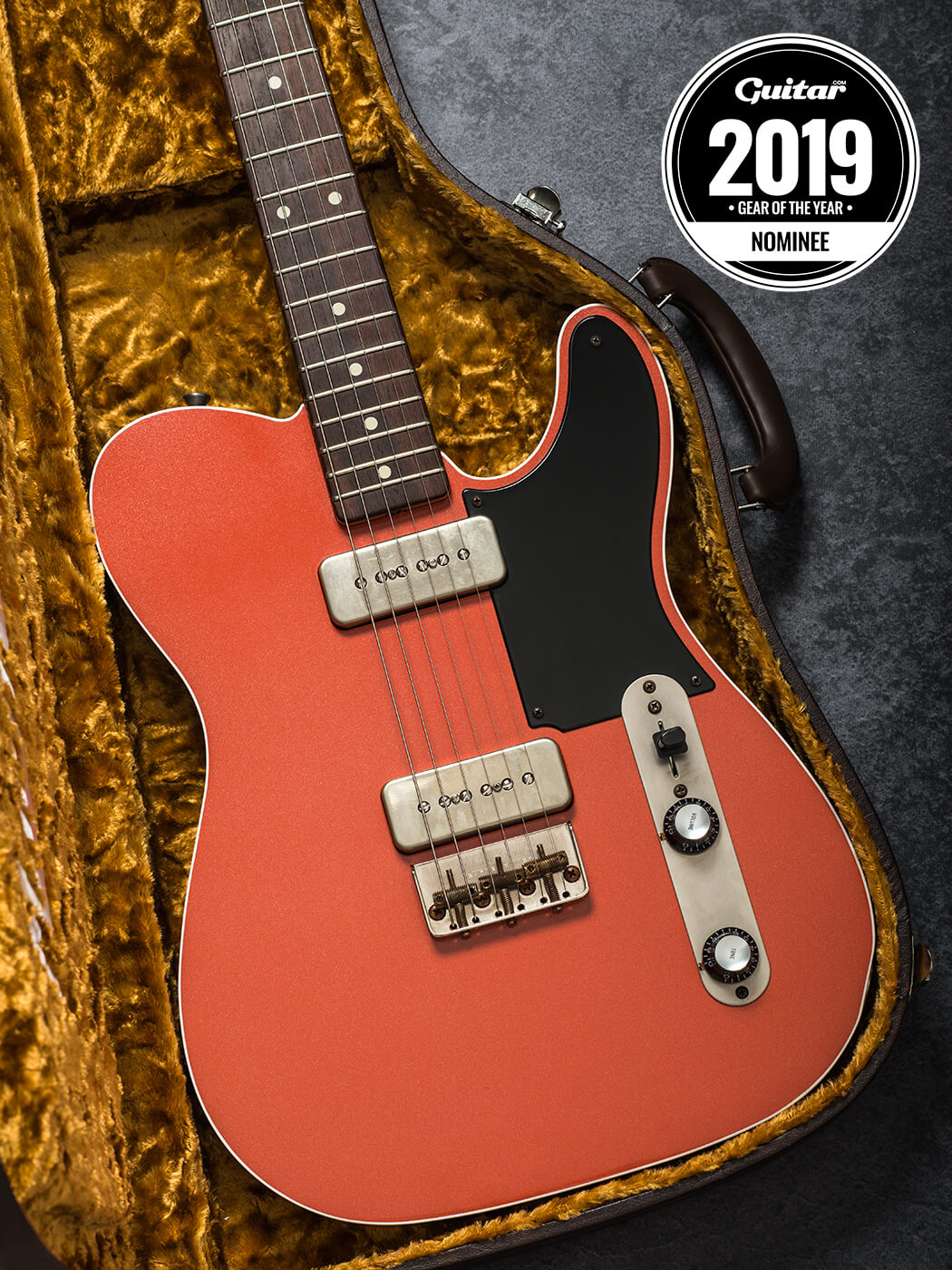 The brainchild of luthier Tal Macmull, producer/sound engineer Amit Sadras and pro guitarist Sharon Levi, Macmull Custom Guitars is based in Jerusalem, but its high-end wares were brought to our attention by The North American Guitar in London.

Combined with bespoke pickups and premium components, the Heartbreaker’s simple array of controls can deliver an extraordinary range of inspiring tones. Try rolling the tone control off with a rasp of tweedy overdrive dialled in on the amp and flip to the neck position – where many guitars would be unusably woolly, single notes here are rich and complex, with a prominent ‘woo’ vowel sound that’s evocative of Cream-era Clapton available all over the fretboard. Tune to open G and it’s deliciously swampy, and as you roll a little treble back into the mix, the sounds get throatier and rawer.

WE SAID Macmull’s burgeoning reputation for fine electric guitars is thoroughly deserved and we can’t wait to see what the company does next. 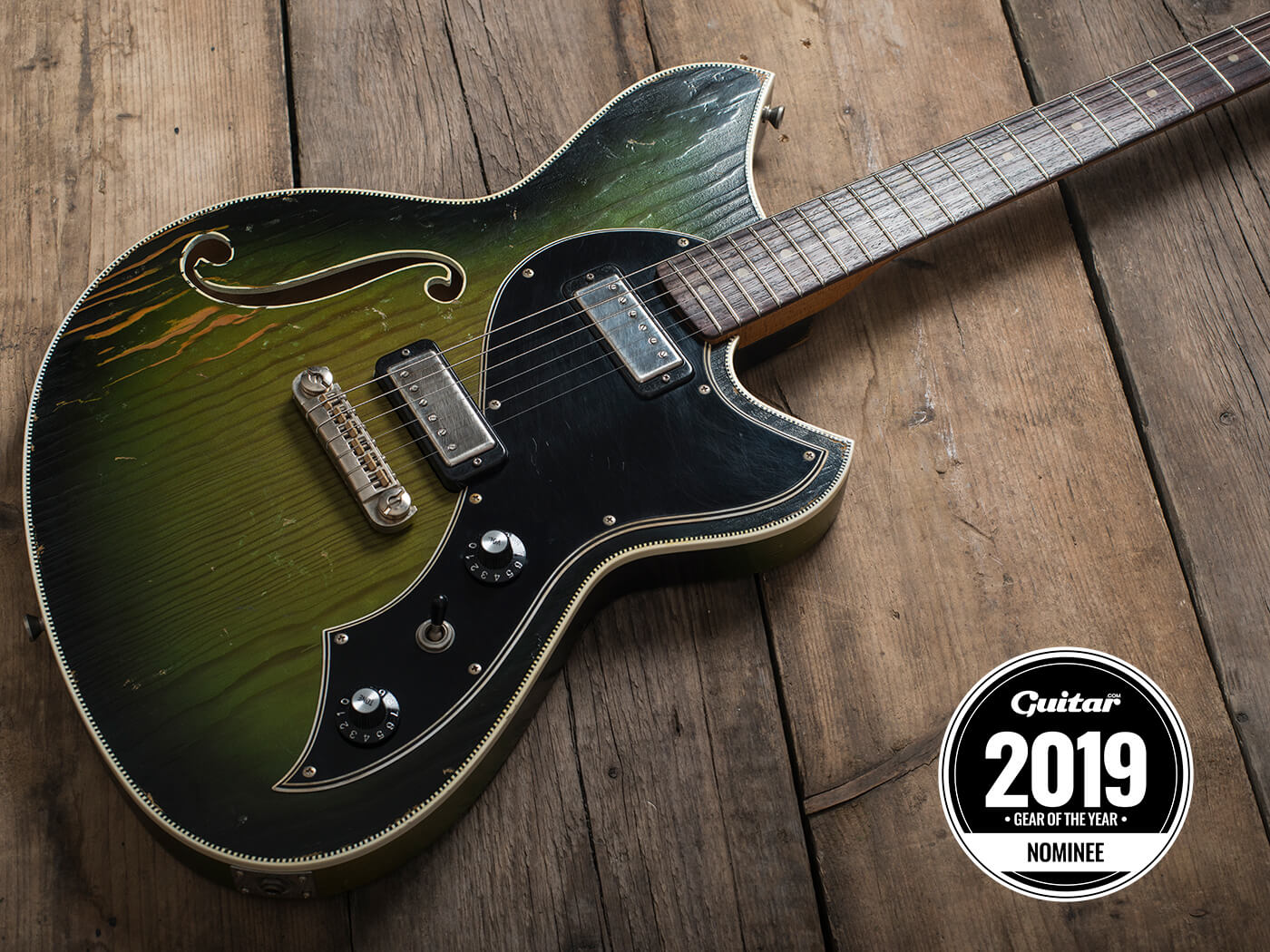 The Novo Mirus J represents another virtuoso performance from one of the world’s leading electric-guitar designers: Dennis Fano. It’s a wonderful collision of an offset-body outline that’s Jazzmaster-like below the waist and the pointed horns of Rossmeisl-era Rickenbackers. At the body end, though, things get a little less Fender and a lot more Gibson, thanks to a pair of Lollar mini-humbuckers mounted in Les Paul Deluxe-style rings and a Schroeder wrapover bridge, which incorporates six individually adjustable brass saddles.

Tone-wise, the Mirus J’s acoustic air and resonance working in unison with the clarity of mini ’buckers is a golden combination and there’s touch-response here in spades. With a small US-voiced valve combo on the point of breakup you can explore lush, sparkling clean voices by playing softly with fingers, dig a little harder for gritty blues or attack the strings down near the bridge with a pick for nasal lead tones evocative of the early Stones singles.

WE SAID Spectacular tones with the looks to match. The Mirus J proves that Dennis Fano is anything but a ‘boutique’ trend-follower. 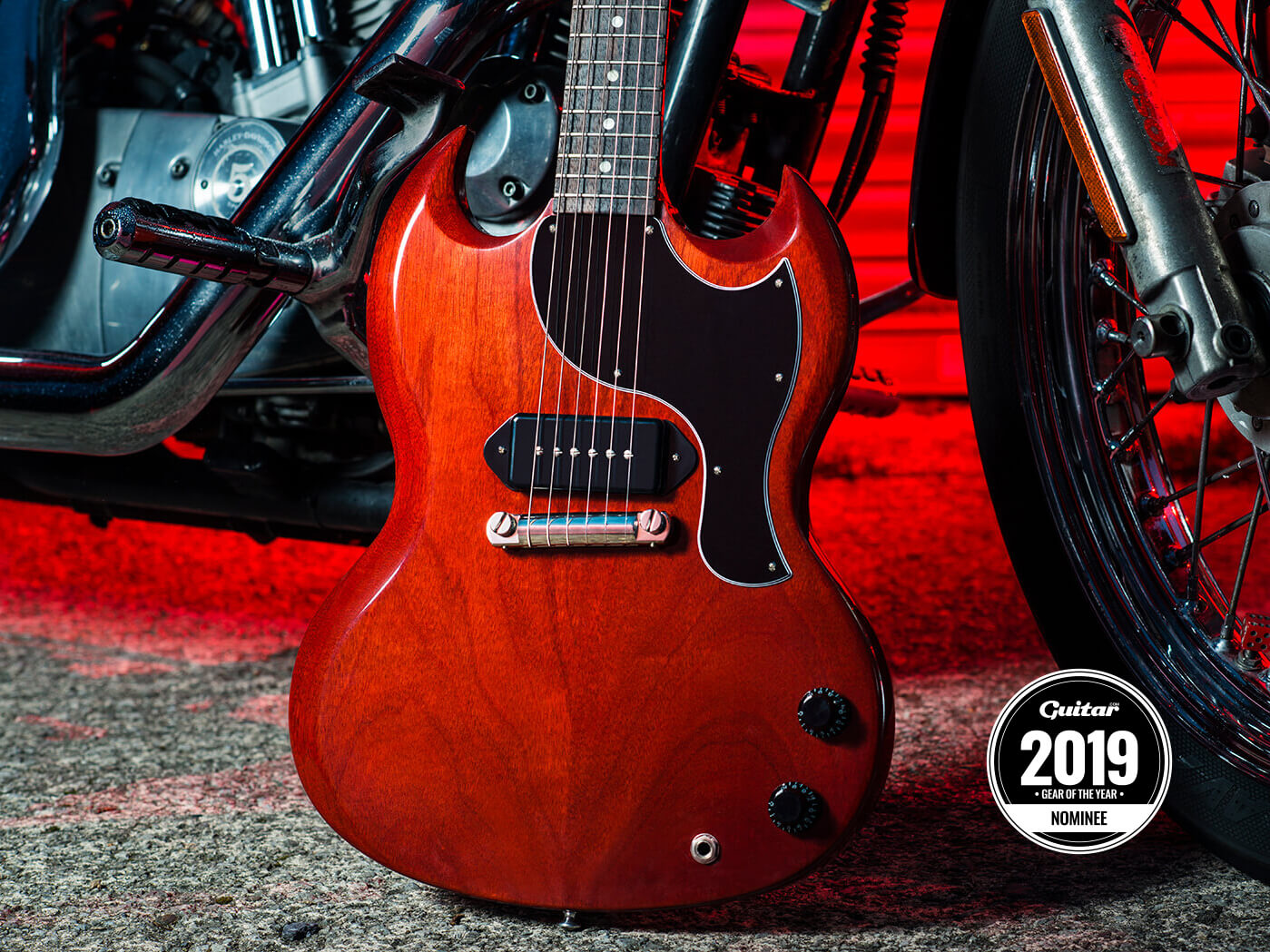 As you might expect from its stripped-back specifications, the ‘student’ model SG Junior is the lightest of the new Gibson SGs from the Original and Modern Collections. It feels very vintage, and its unplugged tone is nothing short of astonishing – strum any chord and vibrations can be felt through the body and neck.

There are no real surprises when we plug in, and frankly, we wouldn’t want any. The P-90 is hot without being over the top, there’s a strong midrange push, growling lows and plenty of bite in the upper mids and treble for articulation. We compare it with the bridge P-90 in a 1962 ES-330 and it has to be said that the SG Junior acquits itself very well.

WE SAID Instant tone, fabulous sustain and playability and nothing to fuss about make this a near perfect plug-and-play guitar. 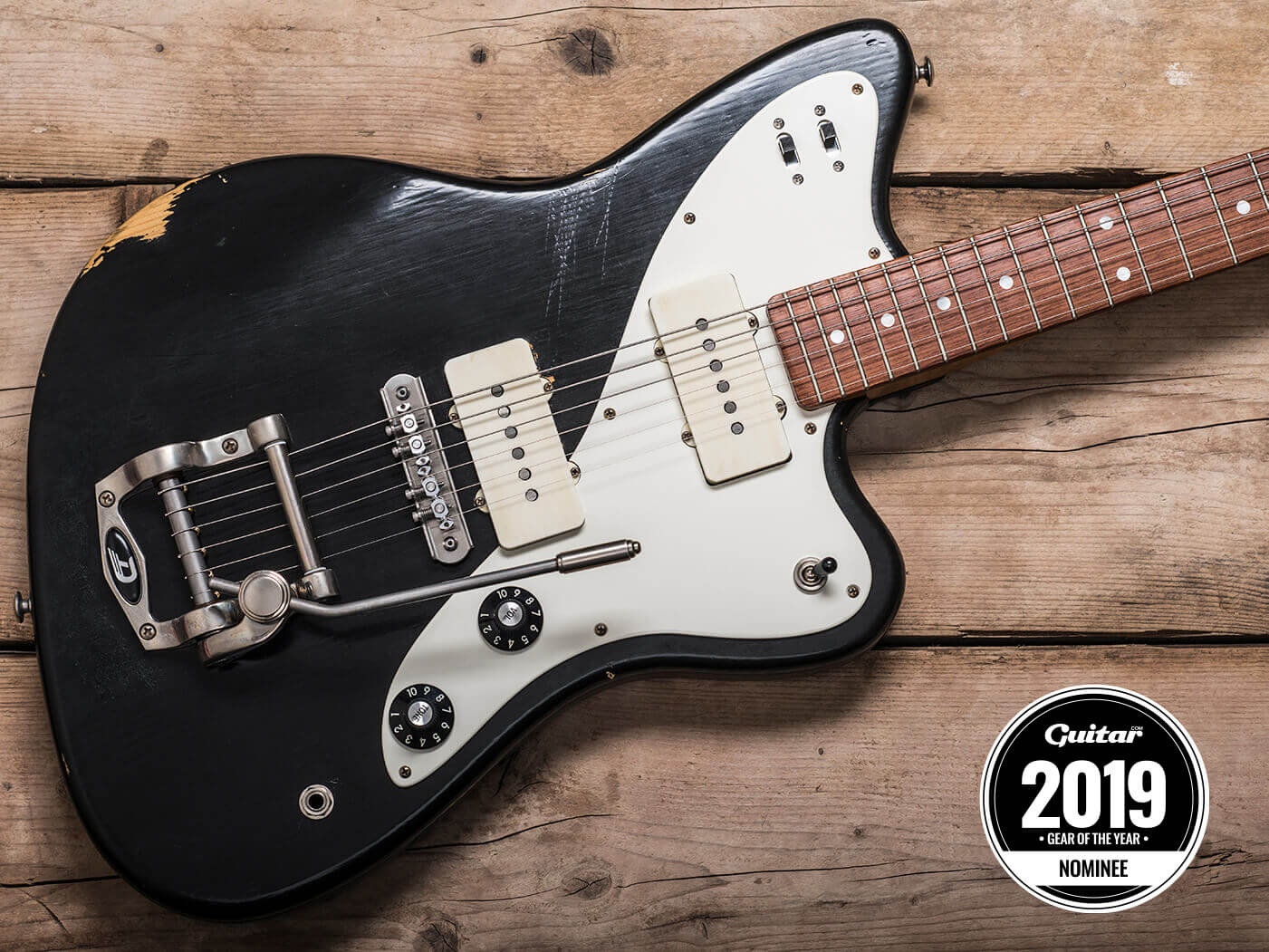 The Bunting Melody Queen’s outline is rather like a Jazzmaster with a softened upper horn, but it’s quickly apparent that there’s plenty to differentiate this instrument from the Southern Californian offset that inspired it. For starters, the body is made from German spruce and is remarkably light.

When driven, the Mojo Jazzmaster pickups have those raw, abrasive punch and sinewy dynamics that put us in the right ballpark for The Black Keys and garage blues; everyone associates offsets with the salty splash of surf, but there are plenty of juke-joint tones in the good ones, too. Clean things up and there’s twang and shimmer in abundance. The Melody Queen’s acoustic resonance and sustain translate into a longer and more even decay than you might expect from an offset and it really suits the smooth Duesenberg vibrato.

WE SAID There’s a versatile array of tones to suit many styles, from indie and funk to Americana. 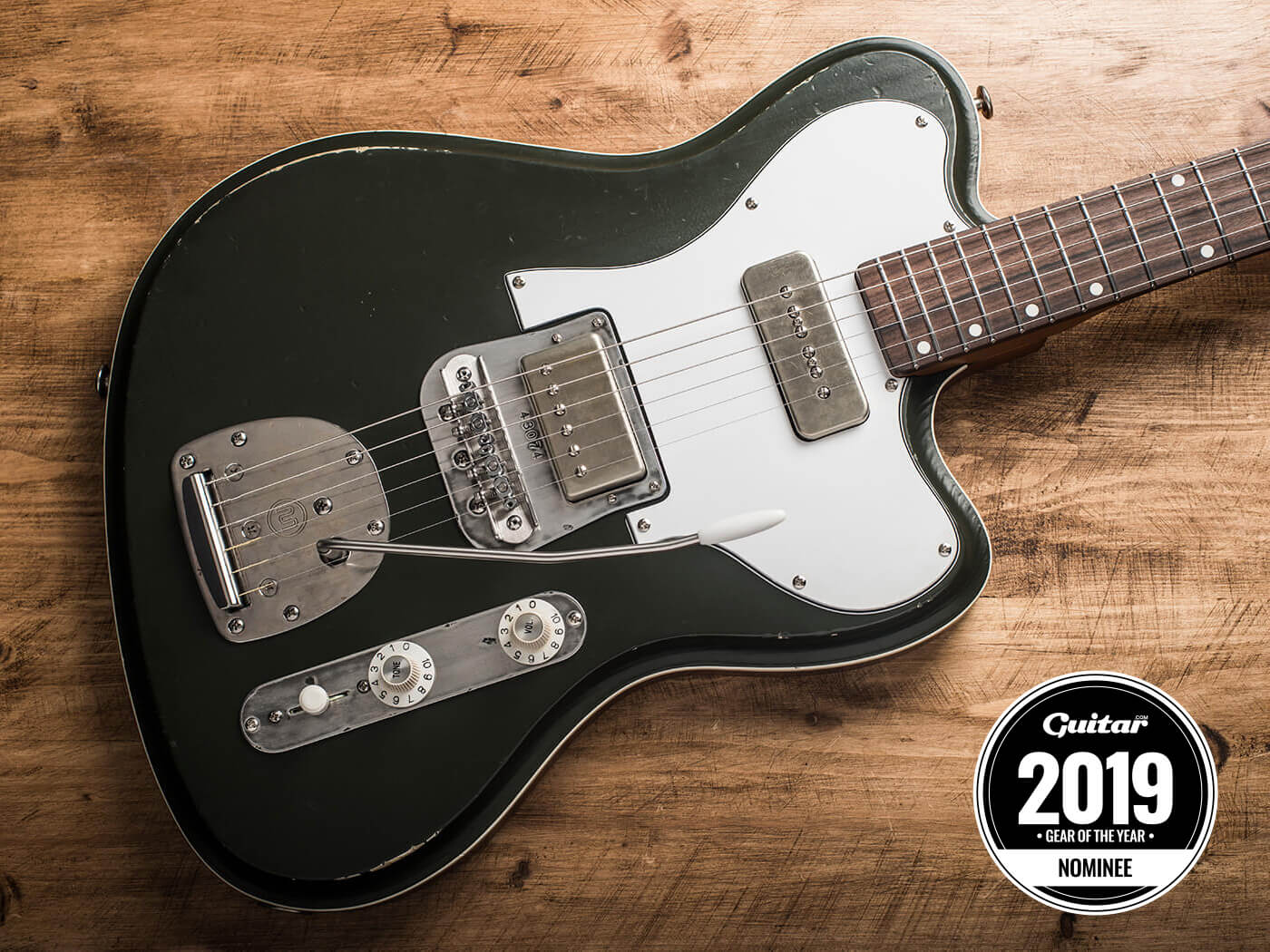 Saku Vuori’s designs are inspired by old Finnish architecture and often make use of pine trees, one of the country’s biggest natural resources. However, the Vuorensaku T Family ‘Birke’ speaks of another of Vuori’s loves: Fender offsets.

A clean amp makes it clear from the off that both hand-wound pickups have the hi-fi chops to preserve the guitar’s innate fullness of tone. The neck P-90 does the jazzy thing with style, though it has little of the ‘snap’ you might be expecting based on P-90s in Gibson solidbodies. Likewise, the ’bucker at the bridge doesn’t sound much like a PAF, at least not in this setting: slam on the overdrive and it’ll gladly get stuck in.

WE SAID There’s certainly an element of Jazzmaster in the body shape, but that’s combined with a Tele-style control plate and, most distinctively, an elegant German carve around the front edge of the body. 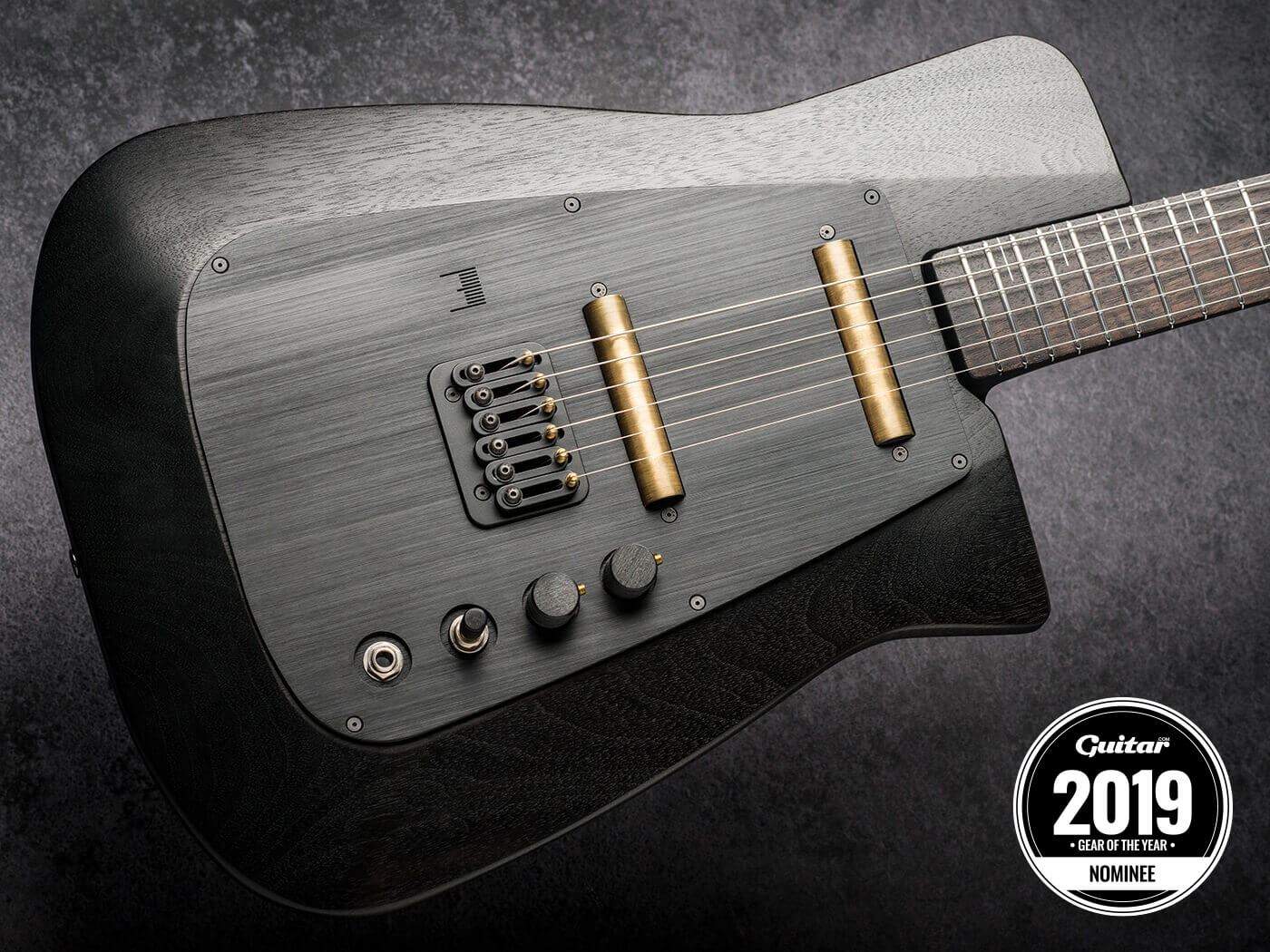 Founded by Florian Bouyou, who studied graphic design and furniture-making before turning his hand to luthiery, Millimetric is all about custom builds – so the MGS2 isn’t actually available to buy.

Our review instrument’s black walnut body and neck have a pleasing satin finish and the flat-backed body tapers to an audaciously thin edge on all sides. Yet for all its bold design elements, the MGS2 is fundamentally a lightweight single-cutaway guitar, so there’s nothing radical about the playing experience.

Well, we are dealing with single-coil pickups and a Fender scale length here – so while the mismatch between sci-fi looks and retro tones is perhaps slightly jarring, it shouldn’t really be a surprise. On the bridge pickup especially, the MGS2 delivers a snappiness that’s halfway between Danelectro and Strat. Things stay bright and lightweight on the neck pickup, which is all about clean precision rather than jazzy soulfulness.

WE SAID If there’s one word to sum up the sound of this guitar, it’s ‘twang’. 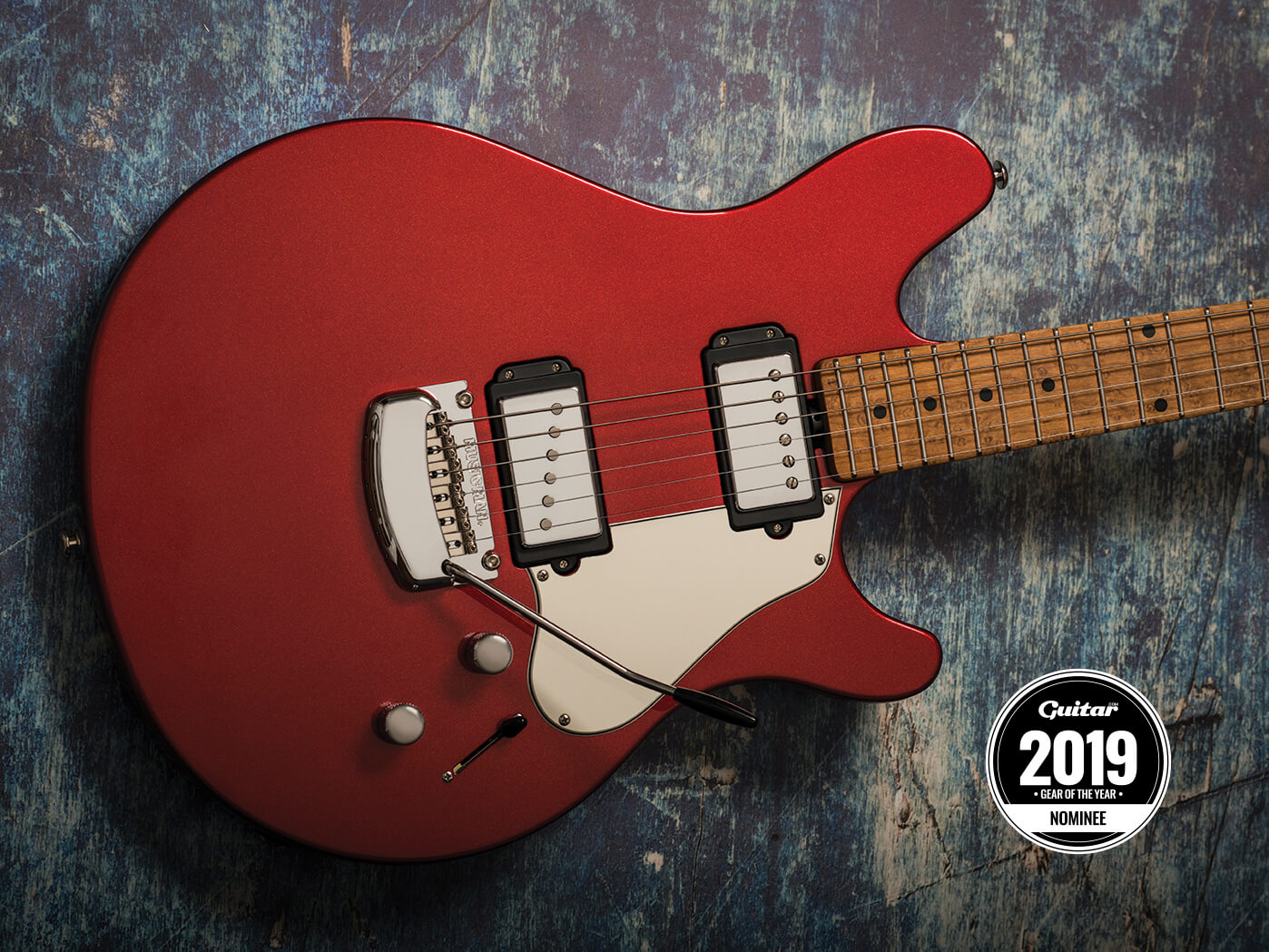 Although the original Music Man Valentine, released in 2016, covered a lot of ground already, this late-2018 iteration ups the ante with the addition of a vibrato bridge. The Valentine’s impressive acoustic resonance and sustain translate to a similarly excellent electrified performance.

WE SAID Whether your poison is pop, funk, soul, Americana, rock ’n’ roll, experimental indie-rock, this guitar has you covered.