UK company Stone Deaf Effects & Amplification builds innovative stompboxes that have graced the boards of some of the biggest stars in rock. Main man Luke Hilton explains tells the story of the firm’s rapid growth and idiosyncratic designs… 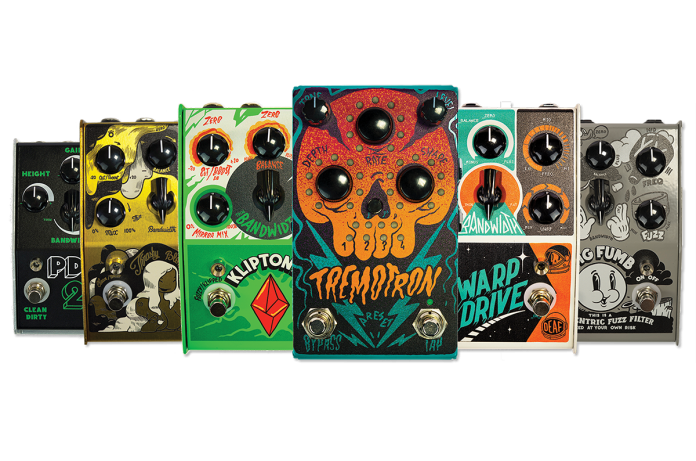 Q. When did you first get into effects pedals?

“I first got into collecting pedals around 2008. Started off with Boss, then got a Subdecay Flying Tomato, which was a great pedal. Then got some D*A*M Pedals before they became really popular and then an old Coloursound, and an original Way Huge.”

Q. How did that grow into making pedals for yourself?

“The collecting led me to see gaps in the market. One was in active EQ, and I had an original Maestro pedal as used by Josh Homme at the time. This was designed by Bob Moog in the 1970s and was called the MPF-1. I thought it was a wonderful pedal but too large and over-engineered. So, I went online, found the schematic, reverse engineered it and had it made using local suppliers to make Stone Deaf’s first pedal, the PDF-1.”

Q. Was it just a straight clone of that Maestro pedal? How has that changed with your revamped PDF-2?

“Yeah, the PDF-1 is a direct copy of the MPF-1 but with component improvements, lower noise floor and smaller footprint. Some of the PDF-1s are quite sought after now, and we still mod them occasionally for expression control, as some didn’t have it at first. The expression and gain controls came in with the PDF-2. Although the PDF-2 does sound slightly different, it can still do the sounds of the PDF-1, but with expression control, a gain control pot and footswitchable channels – all of which customers wanted – as well as a lower price.”

Q. What are your favourite pedals you’ve built?

“My personal favourite is the Warp Drive and the Tremotron, and the new delay we have coming out. I like all of them, because I spent hours doing listening tests to make sure all of our pedals when on the same pedalboard wouldn’t sound the same! The Tremotron is in mine and many other guitarists’ opinion the best analogue square wave tremolo on the market, and it’s all made in the UK. The Syncopy, which is the new delay, sounds great and also does vibe and chorus tones with its in-built modulation and one second of analogue delay. The Warp Drive is brutal, and again is the most responsive high-gain pedal I’ve ever played, and has the best noise gate we’ve come across in such a pedal.”

Q. What makes Stone Deaf pedals different to other boutique boxes out there?

“We’re different because not one of our products is the same as each other – we cleverly design to reduce cost but to also incorporate individual features to each product. People don’t want to buy an overdrive in a different colour that just sounds the same as the one they already have. We also incorporate digital control, and this is going to play a large part in our future. It will allow the guitarists to be able to recall a huge palette of textures and tones at a given moment but still retain the analogue sweetness of the tone. We’re reasonably priced when you consider the R&D we do on our products, as well as the fact that they are made in the UK. You’re supporting UK manufacturing!”

Q. The graphics that you use on your pedals are very distinctive – who does those?

“We had previously used other artists and I had done the artwork on the PDF-1 when we first launched the brand. It always had an identity with the brand name but not the look of the brand. A guy called Matthew or commonly known as ‘McBess’ purchased the first PDF-1 off me and later we became friends. I was working with an illustrator and it didn’t work out as how I had envisioned so I spoke to Matt one day and he agreed to help. He’s super talented and created this visual style that’s sort of Steamboat Willie-esque, but with a satirical demeanour.”

Q. Your pedals have been used by the likes of Josh Homme, Simon Neil and others – how did that come about?

“Right place, right time, right product! I met Josh Homme at Leeds Festival and I am a huge QOTSA fan. I’d also gigged previously with Biffy Clyro in Manchester as a support band on their first EP and toilet tour, so I’d spoken to Simon at Leeds and he remembered me. The Chili Peppers just bought some stuff off me. I met a guy in a pub who was friends with Duff McKagan, and he got some stuff off me. I got an e-mail off Nick Valensi of the Strokes asking to buy some PDF-1s and Fig Fumbs. I gave Fall Out Boy some pedals as I was back stage at Download, and Joe Trohman was such a nice guy and we hung out briefly. All a lot of luck and charm to be honest!”

Q. How has that big-name artist association helped build the Stone Deaf brand?

“It has helped us grow our business and Josh Homme is a god when it comes to tone. He knows his sound and how to get it – and his set-up is fascinating. I think people are really interested in how the songs they love are created, and artists are fascinated by the equipment other musicians use, too.”

Q. What’s next for Stone Deaf?

“I wish I could give you an insight in new releases in the future, but we have the Syncopy coming out soon and this is going to be a flagship analogue delay with one-second worth of BBDs and ability to act like a chorus and vibe pedal. For other stuff people just need to go to our Facebook and Instagram pages to keep their finger on the pulse.”
For more information on Stone Deaf Effects & Amplification, visit stonedeaffx.com.