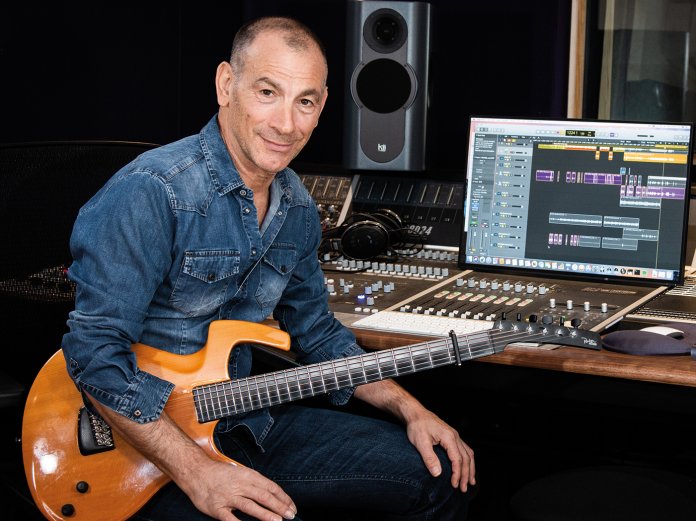 Carmelo Luggeri’s guitar journey began when he was sitting on an Italian beach and heard Santana’s Samba Pa Ti. From that moment, he knew that he wanted to be a guitar player, and set about it with some considerable gusto. He eventually signed to Bill Wyman’s Ripple Productions as a writer and worked with the former Stone on various projects, before going on to collaborate with the likes of Julian Lennon, Andy Williams, Paul Rodgers, Chris Rea and Ralph McTell.

For the last decade, however, Carmelo has performed as a duo with one-time Elton John foil Kiki Dee. “I’ve been a musical collaborator, arranger and performer with Kiki since the mid-90s,” says Carmelo. “We have our own studio well-stocked with guitars we use for live work and recording on our own label, so we’re pretty much self-contained.”

The pair met when Carmelo was brought in to produce some tracks for Kiki on a best-of album, but the late Steve Brown – the man who discovered Elton John – clearly saw something in their dynamic, and suggested the pair start touring together.

“We were delighted and said, ‘Who is in the band?’ He said, ‘It’s just the two of you!’” Carmelo recalls. “We just thought he was mad, it seemed odd at first after being in bands. I like to think that we turned left! We did a lot of experimenting and we still are today.”

Brown also ended up having a direct impact on the makeup of Carmelo’s gear collection.

“Steve said that while I was a good electric player, there was magic happening when I played acoustic,” he remembers. “He told me to go out and buy a few decent acoustics, so I toddled off to the now-defunct Acoustic Centre in Wapping, London, and bought a pair of custom Lowdens – an O25C with a mahogany body and an O23C with a walnut body, both with cedar tops – and a Martin D-93 160th Anniversary model with all the trimmings including a mahogany body and spruce top. Needless to say, the Martin is gorgeous, and one that Kiki has written many songs on, but since that day, it’s the Lowdens that have been first choice for live and studio work.

“The O25C I use for the more delicate fingerpicking, there is some wear now around the soundhole so I fitted a clear scratchplate. I’m not that physical with a guitar, so I still can’t figure out how the top of the O23C had worn so much! I use it for the more aggressive approach but it’s worn to the extent that the top has started to buckle. I fitted a red tortoiseshell guard for a little protection and maybe to help with the stability.

“I talked to George Lowden about replacing the top but he said the cost would be almost as much as a new one, so I bought a backup O25C with the same specifications. They are amazing guitars.”

When it comes to acoustics in a live environment, Carmelo adds an unusual item into the signal chain, for acoustic guitars at least.

“I use a Tube Screamer, with the gain wound right back,” he explains. “It just gives them a little bit more upfront in the mix. I use that pedal on a lot of my instruments, including my little Sherwood eight-string Irish bouzouki, which is also on most of our albums. I fitted an old Tele pickup, and I’ve just noticed how much the top is also wearing from my fingernails. I’m starting to wonder if I’m a bit of a hooligan player!”

While acoustic guitars are his primary focus when it comes to his shows with Kiki, Carmelo does bring some more esoteric instruments, namely a very unconventional Parker Fly Concert hybrid.

“Ever since I used it for our set on the BBC’s Old Grey Whistle Test anniversary programme earlier in 2018, I’ve had a lot of people asking what model it is,” he explains. “They didn’t make that many with just a piezo system at the bridge, and I think only in this bronze finish. It doesn’t have an acoustic body, of course, but it has a very good percussive acoustic response. Some of the plus points include the individual saddles which allow perfect intonation and tuning, and like all Parker models, it’s incredibly stable.

“I know Joni Mitchell uses one with her band. It’s one of the few guitars I keep in standard tuning. I’ve used it to effect on a lot of recordings where you can’t tell if it’s electric or a real acoustic. It’s beautiful, but not a complete substitute for my working acoustic models, and not quite a full-on rock guitar, for which I have many to choose from here, including my faithful ’62 Strat.”

“I bought it in the late 70s and it had already been refinished in this metallic copper colour by a guy called Sam Li, a well-known luthier in London at that time,” Carmelo explains. “I’ve changed a lot of parts, the machine heads and one of the pickups but I still have all the old parts in a box somewhere. I like this colour but often wish it was the original colour, but what did we know back then about Strats being vintage? I saw another ‘62 just after I bought this one, it was ridiculously cheap, but I thought ‘Why do I need two Strats?’ Something I regret now of course!

“It’s been through a lot, to say the least, including being involved in a bad road accident up near the Danish border in 1989 when I was touring with Frank Ryan, who had a couple of big hits in Germany. The car went off the road and rolled over several times. I rummaged through the rubble and the case was really beaten up, luckily the guitar was fine!”

Like many players who have been in the game for a long-time working musician, Carmelo has had many guitars pass through his hands.

“I was using an old Les Paul and this PRS Custom 24 in a band called Rhino Men in the early 90s,” he recalls. “It was mainly for humbucker output and versatility of the coil-tapping pickups on the PRS, but for some regrettable reason, I sold the Les Paul, which I really missed.

“I bought the PRS new, but I wasn’t really happy with the neck profile, compared to the Les Paul, it was far too thick for me. I called English luthier Dick Knight and asked him to shave it down to a vintage Les Paul profile. He thought I was mad to do this to a brand-new guitar, but it was intended to be a working guitar and I’ve never looked back!

“The Strat and PRS handle most of the electric sounds we need on our albums, but now and again when Kiki hands me a sheet of new lyrics, I use other guitars to bring out the best of the song. The track Useless, on our Walk Of Faith album, is a prime example where my dear old Gibson ES-335 was the best choice.”

His collection is such that several of the guitars here have yet to see a great deal of use.

“I do have a few electrics here that I’ve yet to use in anger,” he admits. “Like this Duesenberg Starplayer TV, which family and friends bought me for a special birthday recently. I was really wondering how it was going to compare to my favourite Fenders and Gibsons. I was so impressed with the sound and playability. I love the fact that it has a sound of its own.”

As 50 per cent of the duo, Kiki has plenty of studio guitar experience to draw on as well, and she struggles to choose her favourites from the wealth of instruments that the pair have accumulated over the years.

“There are so many,” she says. “My Yamaha FG-110 has played a big part in my life. I’ve written so many songs on this guitar including Sugar On The Floor, which was from the same batch of songs that I wrote for the Loving And Free album that Elton John produced. I took Justin Hayward from the Moody Blues with me when I bought it back in the 70s as I really didn’t know what to buy. I think we made a great choice between us, it’s more or less used on a daily basis and still in very good condition, unlike my dear old acoustic made for me by British luthier Stephen Delft in ’74, which was a gift from Steve Brown.

“The soundboard has split several times – a victim of travelling a lot through different climates, and I think I may have left it in the sun a few times when I lived in LA in the late 70s. Each time it splits, it gets a new paintjob, even with all that paint it has a nice ring to it. I have small hands but long fingers so I’m more or less comfy with most neck profiles and ’board widths, and my Daion Legacy L 999, made by Kamaki in Japan during the 1980s, is perfect for me. There’s a beautiful sweet sound happening here and again, it’s been on a lot of our albums and a great songwriting guitar. This one was also in the crash and was extensively damaged.” 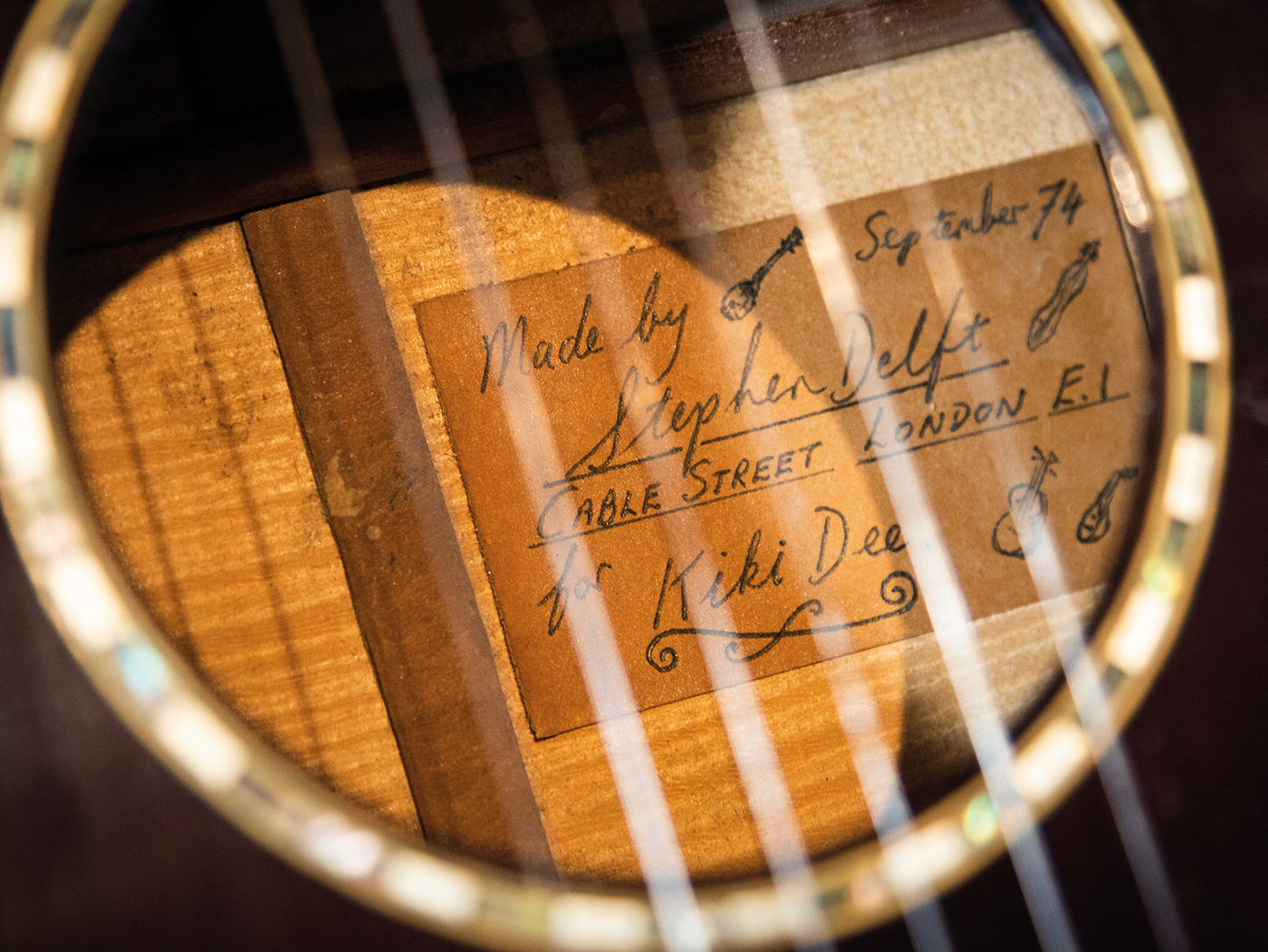 Kiki tends to leave the guitar work to Carmelo live, and when they’re playing the likes of I Got The Music In Me, Sugar On The Floor and a “slower, more soulful” version of Don’t Go Breaking My Heart, he needs a fair number of tools.

“I’ve tried to limit the number of guitars on stage,” Carmelo insists, “But I need as many as eight for tunings like C6, open E♭ and ones I’ve created myself – all of which can take time to tune to pitch. I’ve tried to group my tunings to certain guitars for stage work… tuning on stage can be the bane of my life!”