“I went from playing football to being obsessed with guitars”: Mojo Pickups founder Marc Ransley’s collection of vintage and catalogue guitars

Known for his acclaimed range of hand-wound pickups and specialising in esoterica, Marc Ransley has a guitar collection that’ll set pulses racing among offset fans.

Deep in the rolling green hills of West Yorkshire, nestling equidistantly between the great English cities of Leeds and Manchester, lies the village of Ripponden. In juxtaposition with the centuries-old exteriors of the sandstone buildings that line its narrow roads, the village is also home to the headquarters of one of the most imaginative, creative and cutting-edge brands in the guitar pickup business.

Mojo Pickups founder and head honcho Marc Ransley not only creates custom guitar pickups and accessories, he is also the proud owner of one of the most eclectic, interesting and plain coolest guitar collections we’ve seen in quite some time. Vintage Jazzmasters, Jaguars and a Firebird bump elbows with Supro, Danelectro, Guyatone and Harmony guitars, while lap steels from the 1940s can be found next to vintage and custom-made amplifiers. It’s not all old gear, either – Marc’s collection also includes the work of some of today’s top luthiers, many of which feature pickups wound by the Mojo man himself. 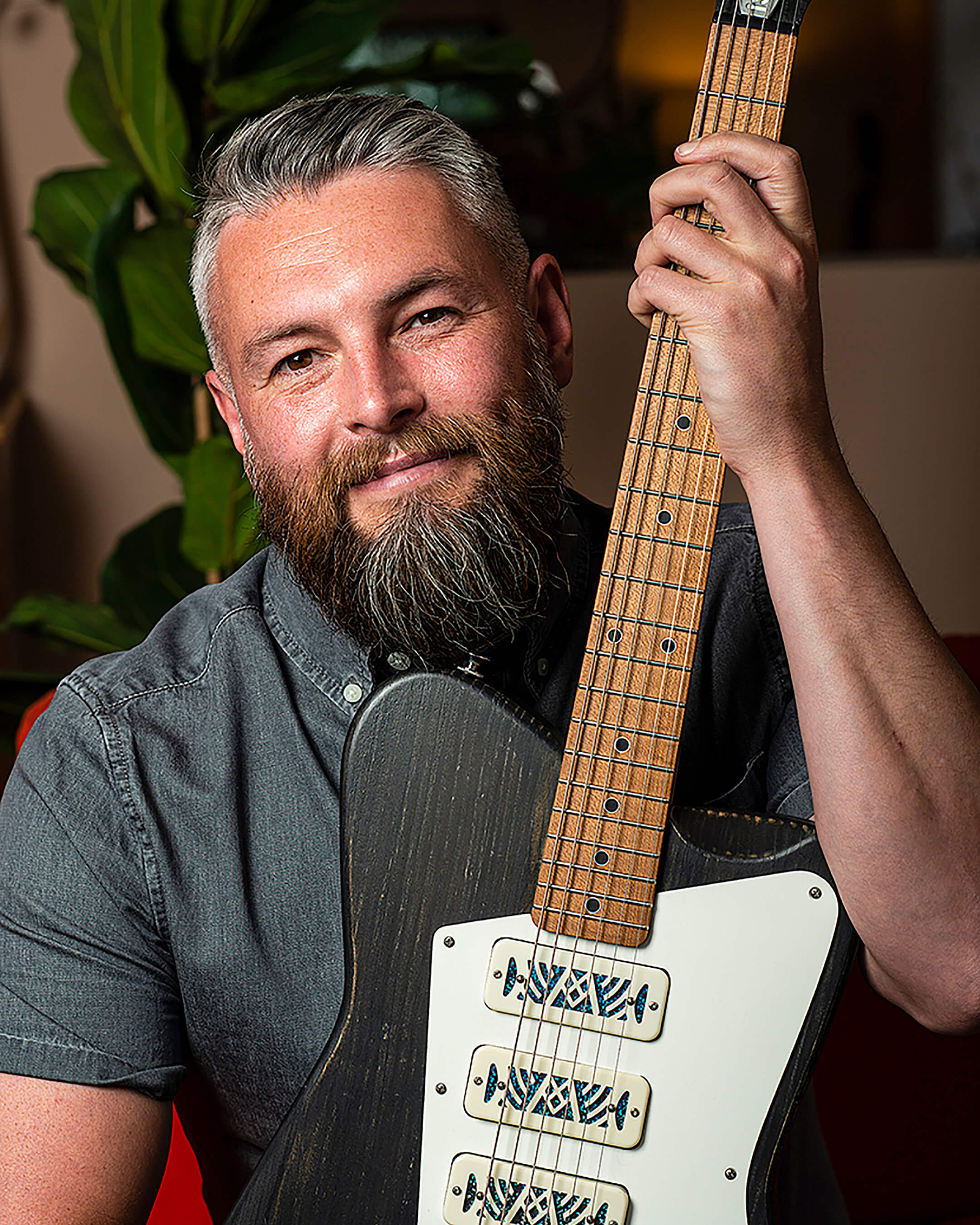 A lifelong guitar player and enthusiast, Marc has been fixing and tweaking his guitars as long as he can remember.  As is often the case, this well-trodden DIY path led to winding his own pickups, and in 2010 he established Mojo as his full-time job and business.

Before all that, like many growing up in the 1980s, Marc recalls how one record in particular was life changing for him. “I must have been about 11 when Appetite For Destruction came out, and it just got me completely,” he says. “I went from playing football to just being completely obsessed with guitars and music. I think I got a crappy catalogue acoustic for Christmas and it just went from there. As you get older and older and you get a bit of money, you just keep buying more and more guitars… well, I do!”

Marc played in bands as a teenager, which he continued to do until he was “too old and uncool”. “We had a lot of fun and some success,” he recalls. “Festivals, MTV, a few recordings – that sort of thing.” Yet although his introduction to the guitar came via mainstream rock, Marc’s taste in music has long been more leftfield, something reflected in his Mojo Pickups product line.

“I got into loads of American indie bands like Pavement, Yo La Tengo and Sonic Youth to a certain extent, that kind of stuff that’s typically called slacker music,” he says. “There’s one thing you might notice about my collection is that there are no humbuckers, really. They’re just not my thing. I completely understand people that want that big thick creamy sound from them, and I have started making PAFs again due to demand, but you couldn’t do that kind of music I was into with them.

“Jazzmaster pickups, lipsticks, Dynasonics, gold foils, P-90s… I just love the clarity of single coils,” he enthuses. “My whole personal thing is high-headroom amps that don’t break up easily. If I want distortion then I’ll use a pedal.”

We notice a beautiful blue amplfier in the corner of the room that we can’t quite place. “It’s made by Andy Pih from Motion Custom,” Marc explains. “He used to be Kevin Shields’ guitar tech and he’s a genius. It’s designed to be very clean and clear to my spec. It’s about 22 watts, more of a hifi amp circuit in some ways. A bit like some of the old Hiwatt amps were – very pure and linear.”

The gorgeous amplifiers don’t end there. “I’ve also got this beautiful old Magnatone High Fidelity Custom 261 with a pair of Celestion creambacks in it,” he says. “The tremolo is just gorgeous. And this old Fender Tremolux from the mid-60s that has had quite a life and needed recovering. It looks so much better now.”

Like many of his indie-rock heroes, Marc was drawn to Fender’s offset classics. He now owns a few, both because of their unique visual and sonic identity, and also their comparative affordability compared to vintage Strats and Telecasters. “I remember finding the really battered sunburst 1963 Fender Jaguar on eBay back in the early 2000s,” he says. “It was much more affordable that other Fenders, and importantly it just looked so cool I had to have it.”

He hands us the beautiful 1963 Jaguar in question. It’s all stock including the original pickups and invitingly worn Brazilian rosewood veneer ’board and clay dot markers. It’s one of the most vibey guitars we’ve played in some time but immediately apparent is Marc’s choice of string gauge. “I string all my guitars with quite heavy strings,” he explains. “13-56 on nearly everything. There definitely is a greater fidelity and clarity with thicker strings that works superbly well with the single-coil pickups but mainly I just like the tension and feel with them, it suits the way I play.”

A 1965 Fender Electric XII, a beautiful ’66 non-reverse Firebird with a trio of P-90s, vintage Danelectros, a 1967 ES-330, a 1947 ES-125…  the lustworthy guitars just kept on coming. “After getting my first one, I soon went out to find a few more Jags and Jazzmasters and the collection just grew from there,” says Marc. “I came across this stunning blonde 1960 Jazzmaster a few years ago. It has an ash body and that’s really rare, apparently. It’s a beautiful weight and balance and I love the feel of the neck. The pickups are just about perfect to me, in fact that’s kind of where it all started for me with making pickups.

“Back in the day there weren’t many options for different sounding pickups for guitars like these. If your pickup broke or something, there were maybe a few Seymour Duncan pickups, but not many options, so I’d start to make my own. You could find an original set for like £75 or something that someone had in a drawer – this was kind of pre-internet and all the knowledge that’s easily available today. I still maintain that the best way to learn about how to build and repair pickups to this day – to learn how pickups work and how they are made – is to take them apart and learn from there.”

Before the Guitar.com inbox explodes with complaints from budding pickup winders who have ruined their original PAFs by dismantling them on the kitchen table, we should point out that much of Marc’s hard-earned learning was carried out with, as he puts it, “the kind of cheap pickups you could pick up on eBay for 20 dollars or something back in the day.”

It was Marc’s inquisitive nature and search for unusual sonic attributes in his own pickups that led him to the pickups his brand is perhaps best known for today: gold foils. “I love the old Vistatone gold foils on vintage Supros, and I love old Japanese Teisco guitars” he says. “I was always fascinated by the gold foil thing. Luckily for me, this was years before they became popular, so anything they came up on eBay I’d buy for a few dollars. I’ve got pretty much every version ever made.

“The interesting thing is that, although the cosmetics do change a fair bit, construction-wise, there are lots of similarities between them. It’s difficult to fit them onto many guitars, so we make a range of gold foil pickups of all sizes to accommodate almost any guitar – built just like the originals, just different sizes.”

Marc shows us a pair of blue Supros, bought in the name of research.   “The bigger one is a 1965 Tremo-Lectric but is missing the built in tremolo, the small is a 1965 Sahara in Wedgewood Blue and both have their original Vistatones.”

The knowledge Marc gained from examining original units has been indispensable in his creating some of his own designs. “I’m a bit of a purist when it comes to pickups,” Marc notes. “If the vast majority of original gold foil pickups I’ve tested all read at 6k, for example, then I try to make mine match that output so they are drop-in replacements. I use the same parts they used to use, rubber magnets et cetera, and try to get them exact. There has been a huge increase in demand for gold foils over the last few years. The clarity of a good gold foil is brilliant in lots of different guitars.”

In addition to direct sales via his website, an increasing number of guitar builders use Marc’s unique pickups in their creations. “Patrick James Eggle is one of my biggest customers,” says Marc. “The growth in popularity of the Coodercaster has meant that Waterslide Guitars in the USA order a lot of sets of gold foil and string-through pickups from me.”

Where there are opportunities to tweak and improve original designs, Marc is happy to oblige. “We have sorted out the phase issues that plague vintage originals,” he says. “We used to do them that way and people would complain they had a broken pickup or something as they didn’t understand. We’ve come up with a way to fix that issue and now it’s much better. On a more practical note, the originals had sharp corners that would really dig into your hand. We’ve rounded them off a bit for comfort.”

Shortly before we depart, we notice some achingly cool modern builds, both made by independent luthiers as keen to push sonic and creative boundaries as Marc is. The Danelectro-inspired back Galo by American luthiers Island Instruments features three prototype units Marc is currently developing, while the Stella Rosa by UK builders Fidelity again featuring his pickups. This time it’s a trio of what, when pushed, Marc reveals to be his favourite ever pickup, the Charlie Christian. “Maybe not in the guitars they originally came in,” he says, “but in other guitars they sound simply amazing. And this Fidelity is such a cool design. There’s always room for a few more!”