When Black Keys mainman Dan Auerbach created his new musical project, he wound up playing “a lot of bass”, blending Mariachi with psychedelia and producing an unofficial East LA hit he has dubbed “kind of low rider music”. 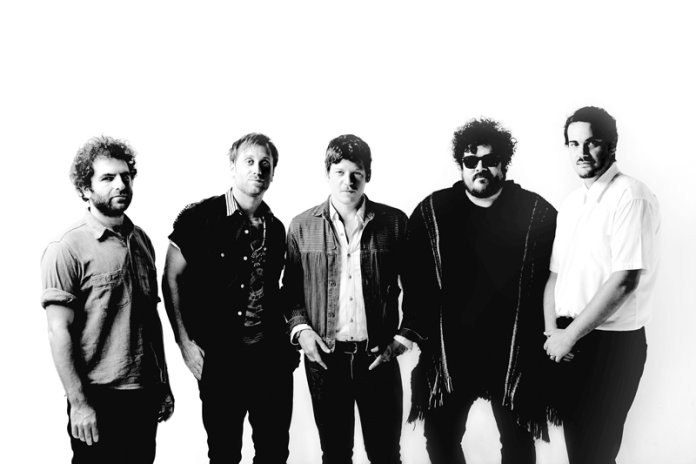 Have you heard the story about the teenager who traded the Strat his mum bought him for a dodgy Far Eastern guitar with four pickups? The individual in question is Dan Auerbach, main man of the Black Keys – and he’s still using his Teisco today.

This is a man who knows his mind. And his decision to step off the rock ’n’ roll roundabout that’s seen him and Black Keys partner Pat Carney rocket to worldwide stardom in the past decade is one he’s certain is right for him at this moment. So much so that he’s unwilling to discuss his main band’s future directly. But more of that later… 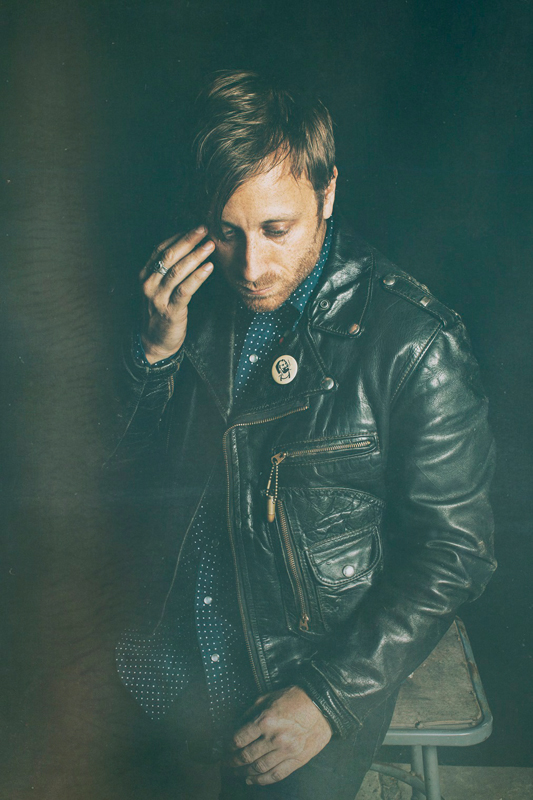 Far from being a one-record wonder, new project The Arcs is destined to have a life of its own, with winter dates in the US and Europe already announced. Like a modern-day Ry Cooder, Auerbach blends Mexican Mariachi, rock, psychedelia and Al Green-esque soul to produce a mix all of his own.

“This has been going on for so long,” he drawls. “The guys in the band are some of my best friends and some of the people I’ve made music with in the past, so we’ve kind of been making Arcs music for years; it just never had a name. So yes, this will definitely continue.”

Advent of The Arcs 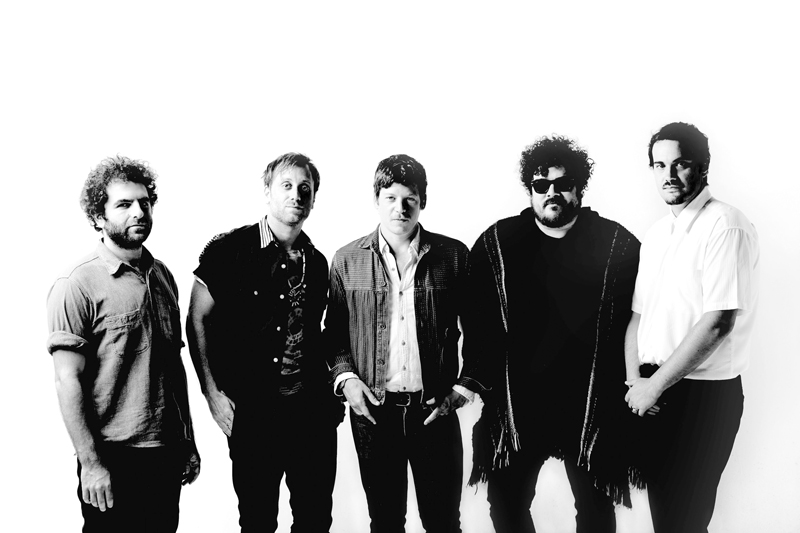 The Arcs played their first show in East LA in early August. The line-up consists of Auerbach, Leon Michels, Richard Swift, Homer Steinweiss and Nick Movshon. Swift was the last live bass player with the Black Keys, while Movshon carried out that role in 2010, with Michels employed on the same tour to add keyboards and percussion.

Also involved is a Mariachi trio, Mariachi Flor de Toloache, a studio booking having resulted in a permanent liaison. “Leon and I were writing a song (Pistol Made Of Bones) and we thought it would be cool to have a Mariachi instrumentation section,” says Auerbach. “So we hired a band and they turned out to be all girls, which was an interesting dynamic. I don’t write music, so I sang it to them; they picked it up by ear, wrote their part and it sounded beautiful.

“So we put them on another song, then another, and they kept doing it. Then we said, ‘Hey, can you guys sing?’ and the rest is history. They were what Leon and I had been looking for for years. So they get lead vocal parts on some songs.”

All material is credited to the group. “I am part of a larger team, and it’s pretty satisfying,” confirms Dan, revealing that, while the music is very different to his usual, his approach as a guitar player remains unaltered.

“Nothing changes. I still just do what’s best for the song, not just what I am personally interested in. No matter how simple or minuscule, if that’s what needs to be done that’s what I do.”

But Black Keys fans should be prepared to settle for less guitar. When asked which tracks were of particular interest to six-stringers, Dan deadpans: “The real lesson for a guitar player is to listen when I am not playing the guitar – that’s when they should focus the most.”

The songs were “created together for the most part. Maybe I had one or two skeletons, but pretty much everything was created in the studio.” Recording was done in piecemeal fashion: “Days were set up by having a couple of people available.

We didn’t set up a two-week session. It was just ‘Are you free this weekend? Let’s do something’. So we ended up recording all over the place with different gear and it still sounds pretty cohesive; it’s about having the same people.” 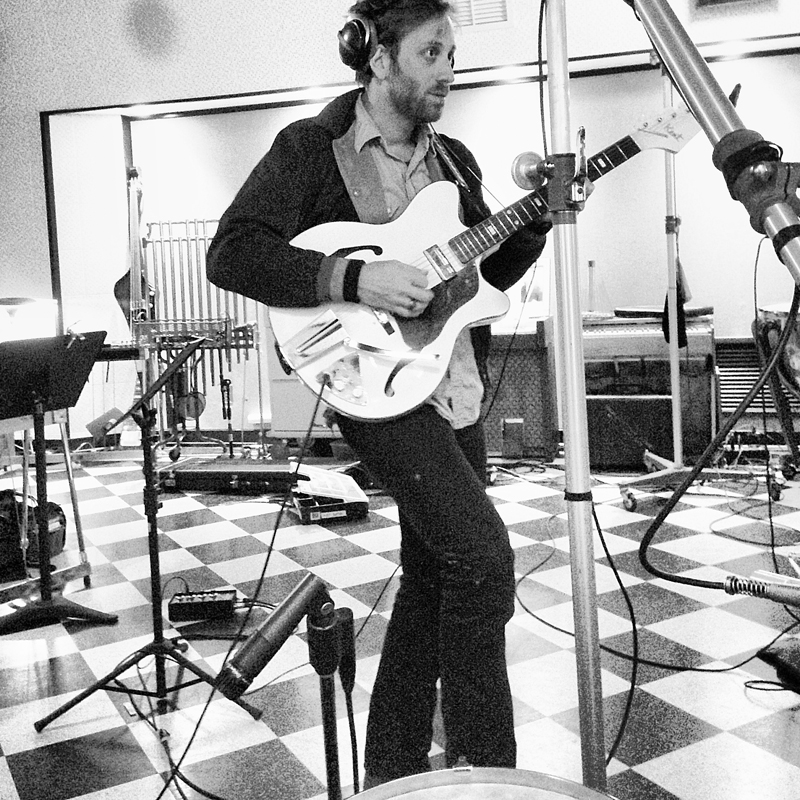 These informal sessions took place across the US, in Los Angeles, Nashville and in a lounge room at the legendary Electric Lady Studios in New York, where Jimi Hendrix latterly recorded.

One unexpected by-product for Auerbach was a venture into the four-string realm. “I played a lot of bass on the record, I feel like I have turned a corner on bass in recent years, started to figure it out more. I use a short-scale Fender 60s Mustang bass through an old Triad.”

Auerbach is a Grammy-winning producer after an award for 2011’s El Camino (he has also produced Dr John and Hacienda, among others). “Everybody better listen!” he crows self-mockingly, before revealing that working with other acts has given him a broader palette on the production front. “I’ve been growing and changing ever since I started. Every experience I have in the studio affects me and changes me.”

Only two guitars were used in this project, his fabled leather-pickguard Telecaster from early Black Keys days and the previously mentioned greenburst Teisco. “I have never stopped using the Tele, it’s always been my first love,” says Auerbach. “My Uncle Tim played in a blues band around Ohio; he had a tobacco burst Tele with binding, which looked super-cool, and he had the best tone using an early pre-CBS Super Reverb.

“Tim has a day job and works in an office, but he was a big influence on me; that guitar and amp always cut through whatever was around it. When I first started the Black Keys I had my uncle’s setup, a tobacco burst Telecaster and a Super Reverb, because it sounded awesome.” 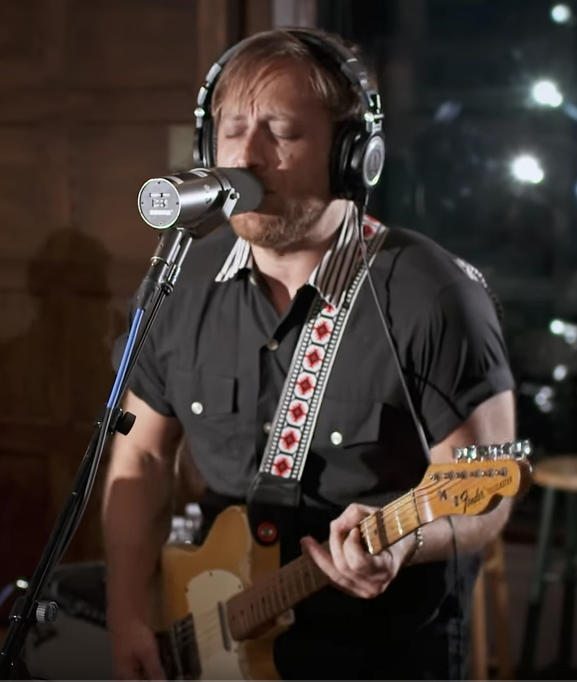 As for his beloved Teisco, he credits this and his subsequent love for vintage, off-brand guitars to a man called Clive who “ran a fantastic guitar shop just west of Cleveland. He was one of those who, 20 years ago, had displays of Teiscos before that was hip.”

“I was a big fan of Hound Dog Taylor and he played a Teisco Del Rey with four pickups through a Super Reverb. I had a video of him, which I sent away for and studied… so when I hit the road, I have a Teisco and a Tele.”

Dan Auerbach’s middle name is Quine – and, as well as Telecaster-toting Uncle Tim, he had another guitarist to look up to in the family, in second cousin (once removed) Robert.

Robert, like Dan, hailed from Akron, Ohio, but made his name in New York as lead guitarist in punk pioneer Richard Hell’s Voidoids. He was then recruited by Lou Reed, with whom he made some notable recordings, including 1982’s The Blue Mask, and also sessioned for acts as diverse as Marianne Faithfull, Lloyd Cole and Brian Eno. He sadly ended his own life in 2004 after the death of his wife, but not before passing on some of his knowledge to his young, enthusiastic relation.

“I had family meals at his mum’s house when I was 19, 20,” Dan recalls, “and my parents asked him to spend time with me. He thought I was going to want to learn Limp Bizkit songs, and I turned up with my Teisco! He was excited by Junior Kimbrough (a bluesman Dan idolised in early life); he loved it and got very excited, but he died before I got to look him up in New York. He would have loved all this [The Arcs].”

The Arcs took their stage bow at a small arts gallery in East LA. “We just did about half an hour with six songs. We played Manflower, which really killed, and Pistol Made Of Bones was great with the Mariachi girls. Stay In My Corner has become an unofficial East LA hit, kind of low rider music.”

Mariachi bass is supplied by a Columbian woman on a guitarrón. “We recorded them on a couple of microphones and couldn’t really hear the bass, so we said we’d record the bass later and bring it up in the mix,” Auerbach explains. “It made the coolest sound, the weirdest bassline because of the way that instrument is strung. So she ended up playing bass on three songs. We wiped out my and Nick’s bass – on Cold Companion, it’s all guitarrón bass.”

Dan’s amplification rig on the last Black Keys tour was “a 45-watt Marshall, a Fender Quad Reverb and two small Danelectros – one’s a suitcase amp like the one Little Walter played harmonica through – with eight-inch speakers. They’re just there to look cool. All give me much the same quality; I set the amps at that sweet spot, then run them all together.”

He faces the amps away from him, a trick he learned from late, great American-Indian guitar legend Link Wray of Rumble fame. “He had the amps turned away from the audience, because if they faced the audience it would have blasted everyone’s ears. I tried it, and it sounded so much better.”

His board is “a switching pedalboard. We’re always fixing pedals as the boxes get smashed, so this little relay switches instead and the pedals sit in a rack.” The Arcs show saw him use “completely different gear – two (Fender) Deluxe Reverbs and a Tele. This one is original with single coils… the one I play with the Black Keys has humbuckers; a very different thing.”

While Auerbach didn’t play any bass as The Arcs went live, there was plenty going on. “I stuck to guitar, Nick is going to be covering all the bass. Richard and Homer are switching; Homer is getting up and playing fuzz bass and Rich is playing percussion and keyboards.”

“The girls all play instruments, too – a tiny five-string guitar, violin and trumpet. Put ’em together and it sounds like the band from Star Wars!” 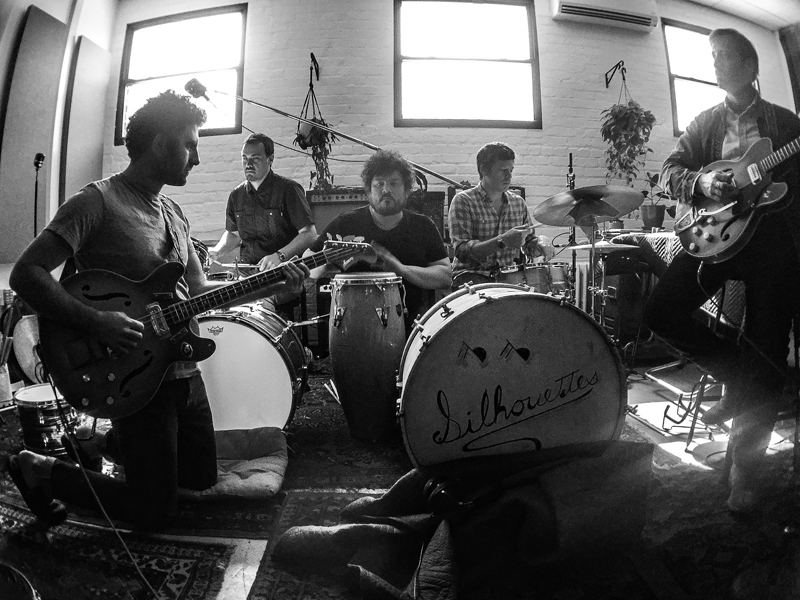 The new outfit’s name came from a track on the album and was a last-minute choice. “That song was called The Arc first, and when we were thinking of the band name we thought we could be called The Arcs and have a song, The Arc… it came out favourite.”

In 2010, Auerbach cut a solo album, Keep It Hid, during a period of tension between Carney and himself, that turned out to be a temporary step off the rock ’n’ roll roundabout. Ask Auerbach if this is another brief diversion or his future, and he becomes slightly defensive.

“I wouldn’t be able to answer that definitively; I am just living in the moment,” he says. The Keys’ UK tour was curtailed after Carney got injured, but while his percussionist partner is now fit and well, it seems unlikely cancelled dates, maybe any dates, will be (re)scheduled. “Asking me what my plans are for the future is weird. We were touring non-stop for four years…”

The Grammy-winning producer is similarly cagey when asked if there’s anyone he would like to work with in the future. “I do have a few people, but I can’t say – they’re already lined up.” Dan worked with Ike Turner before he died in 2007, and reveals unheard music exists from this fascinating match-up.

“We did a couple of songs. Brian Burton (Danger Mouse) hooked us together, asking us to write the music and have Ike singing. They have stayed in the can; I heard one the other day and his voice was like Screamin’ Jay Hawkins times 20… quite extraordinary.”

So will Auerbach’s extraordinary Arcs reach a wider audience than the Black Keys? Dan admits he has “no clue. You hope that people will like it, but you never know what is going to happen. Nothing is guaranteed in this business; we didn’t make this music with any particular audience in mind.”

Open your mind to The Arcs… you might just be surprised!