They’re the Firebird-wielding twins at the heart of one of the world’s biggest indie-rock bands, and on album seven they’ve embraced guitar solos. We meet The National’s Aaron and Bryce Dessner to talk about Sleep Well Beast…

“It’s my 1959 tweed Champ,” says Aaron. “I bought it at Chicago Music Exchange the same day I bought my 1965 Firebird, a couple of years ago. It was a good day! It sounds amazing if you turn it up. I plugged directly in with a short cable and my ’63 Jazzmaster on the bright pickup. To be honest, I don’t remember the day I actually did it… but it’s definitely that guitar into the Champ, turned all the way up.”

The Dessner twins are the beating heart of this thinking man’s stadium band – they write all the music, with Aaron handling production. It’s been a slow and not always smooth passage to their current lofty position.

Their first two albums, The National and Sad Songs For Dirty Lovers, sailed under the radar, and by the time of 2005 cult-classic, Alligator, they were struggling both to make the breakthrough and to make ends meet. Freshly signed to Beggars Banquet, it was the record that began their rise.

The majestic, brass-heavy Boxer followed in 2007, with Barack Obama borrowing its opening track Fake Empire to soundtrack his victorious election campaign. By the time of 2010’s expansive and anthemic High Violet they were playing arena shows and festival headlines, before the sonically lush, deeply morose Trouble Will Find Me completed their elevation to the indie-rock big league.

Along the way, Aaron and Bryce’s near-telepathic interplay has seen them become revered as two of the most interesting guitarists in a modern landscape that places more importance on textural soundscaping than pentatonic acrobatics. That mutual understanding began in childhood, growing up in Ohio with their father’s collection of jazz and classic-rock records for shared inspiration. As Aaron remembers, it was a challenge from their sister Jessica that provided the initial motivational spark.

“Early on, we’d take all our dad’s Beatles, Stones, Grateful Dead, Allman Brothers, The Band and Dylan records and make elaborate notes. He was like Keith Jarrett-obsessed and Gary Peacock, jazz fusion, he was into Charles Mingus…

“We’d be fighting over records and when our sister felt like being nice she’d help us and be like, ‘Here’s The White Album, now don’t bug me for it anymore…’ We were probably seven years old. Then, at some point, she challenged us, because there was an Allman Brothers instrumental called Jessica. She said, ‘You’ll never be able to play that’. We were like, ‘You just wait and see…’” 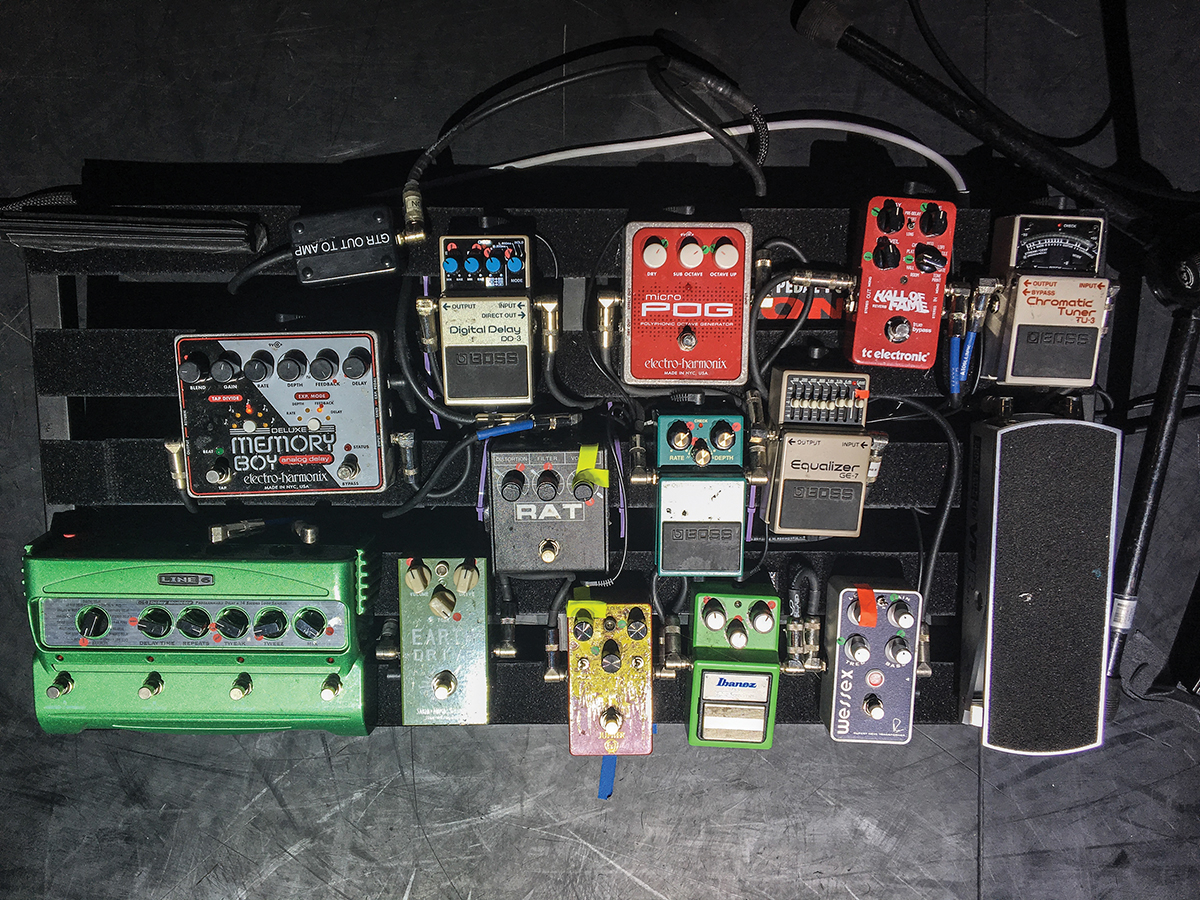 Today, Bryce is one of the world’s most sought-after modern classical composers, having studied at Yale under Benjamin Verdary. The veteran classical guitarist proved a pioneering virtuoso mentor, while the work of contemporary composers such as Philip Glass and Steve Reich have also fed into the Dessners’ intuitive playing style.

The brothers eschew traditional rhythm/lead roles, their phrases weaving together, finishing each other’s sentences, in a vocal style known as ‘hocket’, which dates back to the 13th century.

“We spent our formative years together,” says Bryce, “So there’s a shared knowledge that’s a powerful tool. We don’t have to teach each other a song, we can walk into a room when one of us has been working with musicians for two weeks and we’ll know more in an hour than the musicians, just on the basis of our shared intuition.

“That’s a basis that we’re always trying to push. When we pick up a song together, to say, ‘I’m not going to play what he’s playing’, and we have the agency to do that because we trust each other. On this record, we’re pushing it in both more mysterious and more obvious ways. On Turtleneck you can hear it, I’m on the left, he’s on the right and we’re playing against each other, that kind of duelling guitar solo.”

“A lot of our good songwriting in the past, there’s harmonised guitar,” adds Aaron. “I might be me playing fingerpicking bass [notes], and Bryce will be playing off me, or playing a harmony, but it almost sounds like the same person playing one part.

“We’ll take that further in some cases. On Sleep Well Beast, the pianos are playing off each other by an eighth note. Then there’s other elements, where we’re creating this lattice work of notes.”

“Because we aren’t a guitar-rock band, there’s no hierarchy about who’s playing rhythm or lead,” adds Bryce. “Those kind of old paradigms don’t interest us.”

What does interest the Dessners, however, is hip vintage gear, with both twins having 1960s Firebirds and Jazzmasters in their guitar collections.

“I have a weird Frankenstein ’65 Firebird I rebuilt that has Lollar pickups in it,” says Bryce. “Ben Lanz, our trombonist and keyboard player, is a gearhead and sleuths around on eBay. I’d been wanting a Firebird and he found this guitar covered in stickers and bad paint and stripped of its electronics. But he could tell it was a vintage instrument because the brass electronics plate was still in it.

“The person was selling it for $200 or $300. I stripped it, and found the serial number. The body alone is worth quadruple and more than that. That’s my primary tour guitar and is on the record.”

Bryce also used his ’65 Jaguar during the Sleep Well Beast sessions, with Aaron mainly trusting a 1970s Telecaster, as well as his own Firebird. 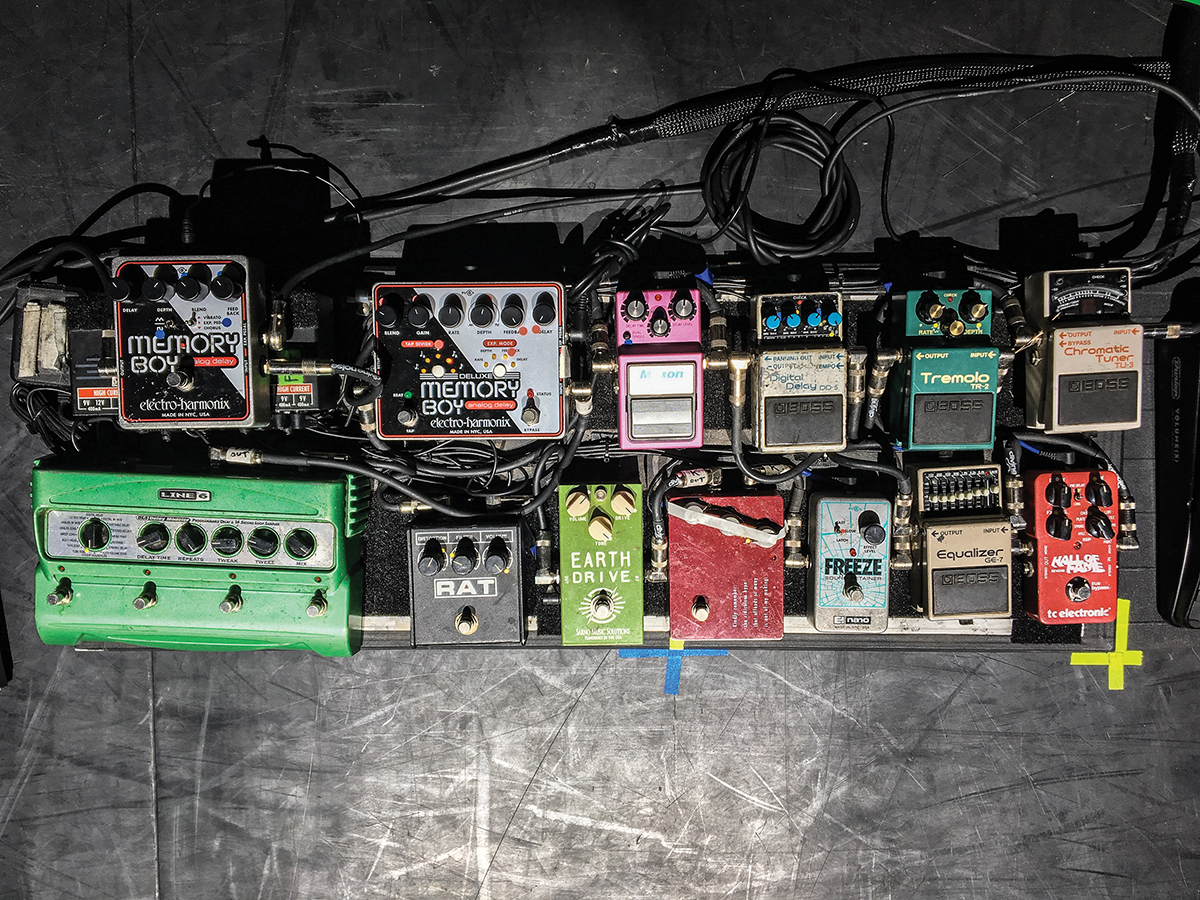 Bryce’s ’board is fittingly similar to his brother’s, but with a few key differences, notably a Klon KTR

“I’ve got a 1972 Telecaster and a lot of the solo lines I’m playing on the record are that guitar,” says Aaron. “I really fell in love with it. Live, I generally split between my ’63 Jazzmaster and the ’65 Firebird. We both have Firebirds. Bryce’s is the more beautiful, interesting adaptation and mine’s a classic old-school all-original Firebird.

“We have a great friend in LA, Reuben Cox, who has a store called Old Style Guitars. He customised two early 60s Silvertone acoustics for us with little lipstick pickups, and we used them on all kinds of things. You can hear it on I’ll Still Destroy You. We have a ’65 mahogany Guild, the model that Nick Drake plays…

“The amps we used on the record were that 1959 Fender Champ… there’s a late-60s Fender Princeton and a mid-70s Music Man with one 12-inch speaker, that has a great gain channel. And there’s an Ampeg Gemini, an old Fender Bassman.”

Those album sessions began immediately after the end of 2014’s Trouble Will Find Me tour, which saw the band headline London’s 20,000-capacity O2 Arena, with Aaron building the Long Pond studio, named after the lake at the Hudson Valley house he calls home when he’s not at his main base in Copenhagen.

They also took in sessions in Berlin and Paris – where Bryce now lives. The Berlin work was the most experimental and electronic in the band’s career, with the Dessners and friend Justin Vernon, of Bon Iver, curating the Funkhaus collaboration of 80 musicians, including members of Wye Oak and Alt-J.

With the demos of Sleep Well Beast in the bag, they invited these disparate musicians, notably the German electronic act Mouse On Mars, to improvise over the playback, infusing the record with its adventurous electronic spirit.

“There was never a conscious decision to go more electronic, it was literally that we wrote so much music,” says Aaron. “Some of it was very natural, us in a room playing, and others were experimenting with all kinds of software, drum machines, samplers and using them as compositional tools. It wasn’t meant to be leaving behind analogue sounds.”
“We’re never deliberate in terms of we don’t make concept records,” adds Bryce. “There was a feeling that we’d never really captured the sound of the band live.

The big difference with this record is Aaron built a studio, where we’re finally able to work all together in a non-pressurised environment. That did lead to a looser recording atmosphere. There is a more experimental, more architectured sound, but also there are songs like Turtleneck and Day I Die that are all of us playing live.

“This process was a lot more fun. There was room for everyone, we all enjoyed being there. Our past records, at least the last few, even when we were living in the same city we were more separate. This time, Matt really enjoyed being there and spent a lot of time with us, which was really healthy.”

“As a band, we tend to be quite open in our process,” says Aaron. “This goes back to how Bryce and I grew up playing music, always in the same room, and then our friends were round… we were never alone writing a song. We’ve always had collaborators. Early on, it was Padma Newsom, Sufjan Stevens, Richie [Reed Parry] from Arcade Fire, Justin Vernon, Thomas Bartlett, and all these people have really influenced the music.

“All that stuff feeds in, and we’re definitely not the kind of band to be in love with our own shadow. We’re still pretty critical and self-aware. It’s not like we think we have the best guitar tones, or best anything, we’re just trying to make great albums we can believe in, whatever it takes. Whether that’s writing with other people, trying something totally new, or building something up and knocking it down – we’re pretty restless as people and I think that ends up pushing you forward.”

With Sleep Well Beast topping many 2017 album of the year lists, The National are going from strength to strength, and have already booked their largest headline shows yet for June 2018 at London’s Victoria Park, with The War On Drugs in support. It feels as if, after an early career that saw them struggle for recognition while peers such as The Strokes and Interpol made immediate breakthroughs, The National have played the long game – and won.

“I think there is definitely a sense of ‘we earned it’,” reflects Aaron. “Nothing came easily, we didn’t compromise, we never benefited from any hype. It was hard and we put in a lot of work, craftsmanship and obsession. I wouldn’t say it’s myopic, but it takes a long time to make records and it took us a long time to become a good live band. I don’t know how many shows we’ve played, but it’s thousands and we’ve earned the right to enjoy this.

“It’s humbling when you find yourself in front of 80,000 people at Glastonbury and you’re like, ‘Really? Our awkward little rock songs?’. We used to play in basements and attics for three friends, and for quite a long time it was just a small thing, but we kept at it and at some point we started to have this drive and really put our heads down to make something great.”

The National’s new album, Sleep Well Beast, is out now on 4AD.