We caught up with Paul Smith at the European launch of the Silver Sky to find out more about a project that has been two years in the making and all-consuming for those involved. The result of so much perspiration is a guitar that even Smith himself struggles to stop playing. A big part of the appeal is undoubtedly down to the instrument’s supremely comfortable, vintage-style neck.

“During the whole process the one thing that got me emotionally was I wrapped my hand around the neck and I went, ‘That’s the first time that’s been tooled up in 50 years’,” Paul enthuses. “That shape. That is a 1963 neck. Everybody who wraps their hand around it goes, ‘I like that’. And I did too. When I felt the raw one I went, ‘Oh my god…’”

The Silver Sky’s 7.25-inch ‘board radius has been the source of a great deal of debate among online commentators. We’re curious to hear Smith’s response to those dissenting voices. “When I listen to Machine Gun I don’t hear any problem with Hendrix playing solos,” Paul notes. “When Stevie Ray Vaughan was playing I don’t hear any trouble. When John Mayer is playing Gravity I don’t hear any trouble. You’ve gotta be kidding me!
“Machine Gun is some of the best electric guitar playing ever. I spent a year trying to learn to play that tune and it isn’t what you think! I mean, Blackmore didn’t sound bad! Mark Knopfler did okay on Sultans Of Swing! I don’t hear it buzzing!”

All that said, he does acknowledge that when using a vintage-style ’board radius, “if the neck’s not dead straight and the frets aren’t dead level then there is a problem, but if you get the frets level, oh my god, it’s just a whole different ballgame.”

Does that mean that levelling the Silver Sky’s frets takes longer than it would on a PRS with a flatter radius? “Yes and no,” says Smith. “I spent more time training the fret leveller ’cause there’s less fretwire. The natural inclination is to level them all the same, but you can’t do that. You have to train somebody to work three times harder on one side than the other.

“We don’t use a Plek machine, it’s not our thing. As a matter of fact at one point they were telling people the only guitar that doesn’t need a Plek machine is a PRS. The guy selling ’em was telling people that. But we’re very careful. I use what I call a straight stick, it’s an old-school method of levelling frets, it works like a charm, and we’re very good at it. The frets are dead level. In order to do a good job levelling frets, first of all the neck’s gotta be straight, a lot of people level the neck by levelling the frets.” 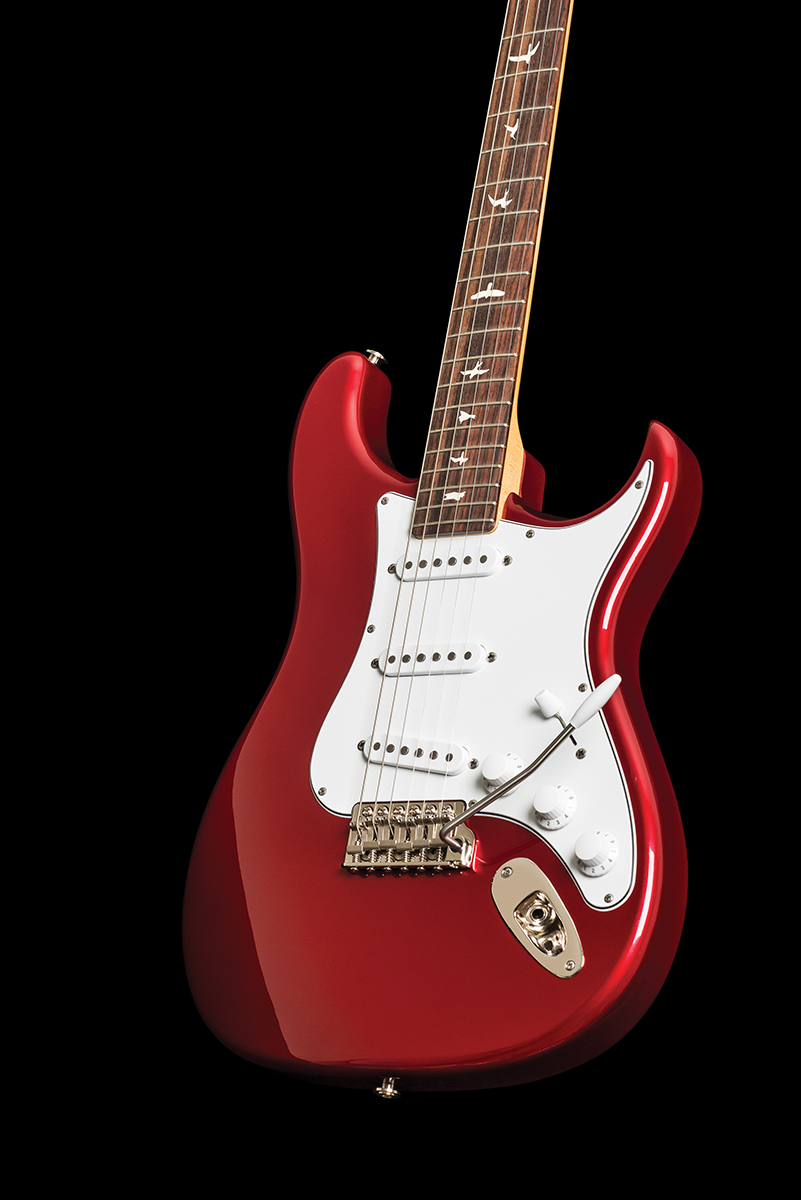 When it came to the voicing the 635JM pickups, although sounding like a “really good” pre-CBS Strat was part of the plan, it wasn’t a simple matter of replication. “The definition of insanity is doing the same thing over and over again and expecting a different result,” says Paul.

“You can’t just wind ’em up the way the internet tells you to wind ’em up and think they are going to sound like that, that’s not the way it works. We had to figure out what was going on and it’s not simple. We have a machine that tells us what a pickup sounds like before we ever plug it in. I had the screens right, and they looked like the old ones, finally, and I plugged it in. When I heard it I went, ‘Well, there it is’. I wasn’t guessing any more.

“On the old guitars it was a crapshoot. This is not a crapshoot. Now we have computerised winders and the engineering has been done so it sounds good. I made [the polepieces] staggered but not the way it would be for a wound G – I changed the staggering for modern strings and it didn’t hurt anything. It has a plastic bobbin not fibreboard. When we were struggling with the pickups I suspected maybe it was the plastic bobbin but it ended up not being that at all.

I don’t hear a difference between the fibreboard and plastic bobbins. I do hear huge differences in the magnets, the wire gauge and other things. I like these pickups! I think they sound good.”

Take It To The Bridge

All Silver Sky guitars ship with the Steel Tremolo bridge set flush to the body so that the vibrato arm only lowers pitch. Paul says that this isn’t purely a set-up preference – it also helps minimise hum: “The guitar is a little louder [that way] and you need every dB of string volume and pickup volume in order to get the signal-to-noise ratio down. The louder the pickup is, the less the hum is.”

The process also included other refinements that aimed to make the experience of playing a vintage-style bolt-on somewhat less of a white-knuckle ride. “The arm’s higher so it doesn’t hit the knob,” Paul explains.

“We have our version of these old saddles but with narrower string spacing. With the old ones the strings would hang off the side of the neck. It’s wider than a regular PRS but narrower than the F-brand. We made the neck a little wider at the end and the right width at the nut. I didn’t want the strings hanging off the edge of the neck. What I wanted was that when John played it, he wouldn’t have to look, he’d know exactly where he was.”

Finally, we wonder if either Smith or Mayer were surprised at the scale of the reaction to the Silver Sky’s launch. “I’m a guitar maker and I’m getting fried at the stake by the internet guys.” laughs Paul. “But everybody has a take on this old thing. It’s like building a violin. John called it all along. He told me almost to the day what was going to happen! This is not his first pony ride on social media.”