“I can’t call this art! I wrote everything in my fucking underwear!”: Bonnie Fraser on Stand Atlantic’s new album, f.e.a.r.

Stand Atlantic on Australian lockdowns, continual progression, and how they turned fear into f.e.a.r.

There was a time in the not so distant past when, by her own admission, Bonnie Fraser hated her life. Nothing was working as she wanted it to, be it professional or personal, and she found herself bouncing between fear and frustration without much of a break. Oh, and of course, there was the small matter of the pandemic to deal with, denying her the chance to escape from the turmoil by getting on stage and throwing her energy into performing. In a way, she’d been severed from a vital part of her identity. “I was left as a shell of a person,” she remembers. Shortly after, she began her first-ever stint in therapy.

The circumstances of her relationship were also having an effect on her feelings of home and identity. Because her partner lives in the UK, she splits her time between here and her native Australia, spending six months of the year in each. It left her feeling displaced, belonging nowhere.

“If it were up to me, I’d have just gone to an island somewhere,” she says. “It was super-taxing, being away from my partner that long. When your partner is going through shit and you can’t be there for them, it’s truly hard. I felt like I didn’t have any control over my own life. I wanted to run away.”

Activity in the Stand Atlantic camp was constrained by circumstance just as much. The band had an album scheduled for release in the hellfire year that was 2020, with sophomore effort Pink Elephant released in August of that year after having been delayed from May. While the album secured the band’s first-ever chart position and visibly gave fans a colourful escape from a grey reality, its release was rather unceremonious without the band able to tour to promote it.

“It was so strange to have the album out and then, a day later, you’re back in your underwear watching Netflix,” says Bonnie. It made her realise just how much satisfaction she got from playing live – the feeling of seeing the overjoyed faces on fans when they hear the first chord of their favourite song could never be matched by watching their monthly Spotify listeners tick up and up. “That doesn’t fucking mean anything to me unless I see it [with my own eyes],” she adds.

Fuck everything and run

Without much else to do, Stand Atlantic’s attention quickly turned to making their third album, f.e.a.r. (‘Fuck Everything and Run’). While Pink Elephant saw the Sydney quartet come into their own with brilliantly vibrant pop rock that was equal parts fun, flirty and cutting, f.e.a.r. is a heavier, cortisol-spiked listen that bristles with the unbridled frustration that may not have had anywhere else to go.

The band took this album as an opportunity to do everything, musically speaking, that they’ve ever wanted to do. In a way, f.e.a.r. is a positive product of its very namesake. Uncertainty abounded: what if they were never able to tour this record? What if they could never make another one after it?

There was never a specific conversation about whether the pandemic was going to kill the band but, individually, guitarist David Potter, bassist Miki Rich and drummer Jonno Panichi wondered how long the stasis was going to last. The group also had Australia’s zero-covid policy to contend with, which meant states could be locked down in a flash if even one positive test was reported – hardly the ideal conditions for a band on tour.

Bonnie ended up on Centrelink (Australia’s Universal Credit equivalent), hoping she wouldn’t be in this state for the rest of her life, while more than one of her bandmates confessed on their first post-lockdown tour that they had considered quitting the band and getting a ‘proper job’, especially if the situation continued.

Stand Atlantic kicked off their new era with deathwish, a distantly alternative hip-hop-influenced track that has no less of a guitar-driven punch, and which featured their first-ever guest feature in the form of a verse from emo-rap star nothing, nowhere.

“Before this record, I didn’t believe we were in much of a place [to do that],” says Bonnie. “That’s my self-doubt going again.” The band held off reaching out to the rapper for a while, unsure of whether he’d accept. Ultimately, insecurity had to come second to creating an opportunity they weren’t sure would ever come around again. On a creative high and having seized back a slice of normalcy, the band came back to the studio to record the rest of what would become f.e.a.r., squeezing another collaboration out of those sessions in the form of playful middle-fingers anthem pity party, featuring Royal & The Serpent.

Bonnie winces as she talks about the lyrical inspiration behind deathwish, the idea for which came from just thinking about cigarettes (“[It reminded me that] we have all these vices that aren’t good for us, and we know that but we keep doing them anyway.”) “It sounds so vain and stupid.” The reasoning for her reaction becomes clearer later, when she describes how she envisions f.e.a.r. as something she calls an “anti-concept” album. There’s something about the notion of being a musician who ‘makes art’ that, metaphorically speaking, makes her go a little green in the face.

“I can’t call this art!” she exclaims. “I wrote everything in my fucking underwear!” She might be right – the purpose that music serves in her life can’t be window-dressed as art; it’s too human, too messy. “What I was going through wasn’t linear. There was nothing artsy I wanted to create about it. I do music because I don’t talk about my feelings and this is how I [express them]. I know that sounds fucking douchey as hell but it’s the truth, and I was just so sick of trying to make it into something that it wasn’t. This is just feelings. That’s all it is.” 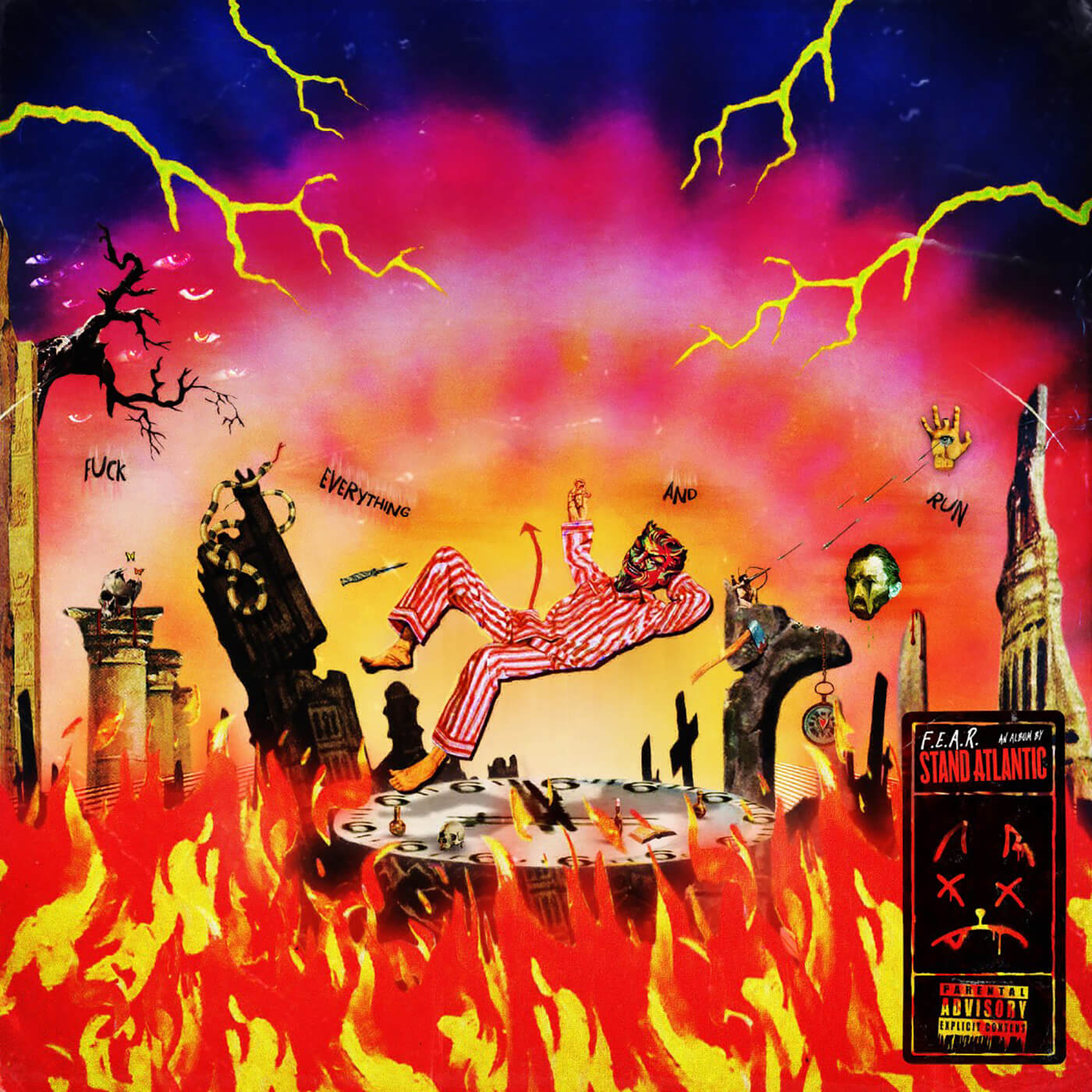 Guitar-wise, Bonnie’s been mostly faithful to the Mexican Fender Tele she bought when she was 17 with money saved up from working a dry job in a call centre. She unlocked a whole new level of sound, however, when she put a P-90 in the bridge. “As soon as I changed that pickup out, it was magic,” she says. “It’s never let me down.” When the band’s ascent began accelerating, Fender endorsed them and gifted her a sparkly Sea Foam Green American Professional II, on which she swapped the bridge pickup to a hotrail. Everything else is taken care of by Kempers. “We used to do pedals and stuff but then we realised we’re plebs,” says Bonnie, wryly. “Don’t ask me anything about it because all I know is how to turn it on! Potter sorts out everything else.”

There’s a compelling argument to be made that 2022 is a great time to be making guitar music, not least when rock bands are topping the charts again and popping up all over TikTok. The resurgence of pop punk continues, with the genre finally putting women and people of colour centre stage, affording them a visibility that they’ve never quite had in the genre before. Even though the band has been kicking around for close to half a decade now, Bonnie considers Stand Atlantic to be a part of that resurgence. But, at the same time, she’s keen to stress that the band is not swimming with the tide of whatever happens to be trendy at any given moment.

“In my eyes, trying to follow a trend is stupid,” she says. “It takes us a while to write songs and record them and everything, and by the time you’ve done that, the trend is gone. If a song is good, there are always ways to make it sound a bit more current if you want. But at the end of the day, [you want to] do shit that’s genuine because people will see through other shit.”

What Stand Atlantic want to be, instead, is reliable. They’ve evolved from one album to the next in frequently unexpected ways but they’re intent on proving that different doesn’t have to mean poorer quality. It’s their sense of personality, ultimately, that glues the records making up their discography together, and even as they’re growing as people, their humour, their sense of fun and Bonnie’s way with metaphors remain a constant. “I just want to show that when people change their sound, it’s not a bad thing,” says Bonnie. “I don’t want people to box us in. I want to progress.”

f.e.a.r. is out now on Hopeless Records.