“There’s something so sexy about guitars and that world in general”: Ben Crowe of Crimson Guitars 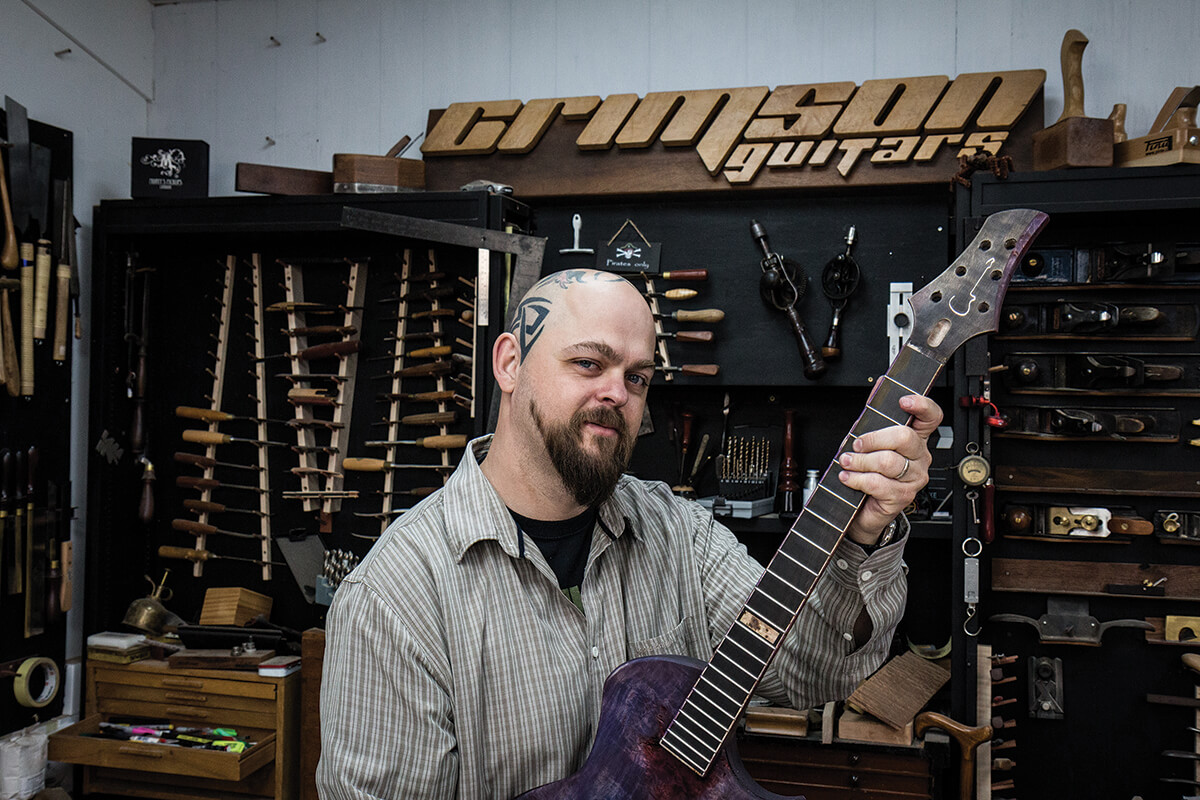 Based in an old dairy in the pleasant surroundings of sleepy rural Dorset, Crimson Guitars is no ordinary guitar company. Headed up by master luthier and founder Ben Crowe, Crimson has been designing and hand-building distinctive guitars for 14 years now, but a key distinction between the brand and other boutique operations is that Crimson also offers a range of guitar building, maintenance and repair training courses, and it also manufacturers and sells its own luthiers’ tools. The company was also quick to embrace online video and has built a 100,000-strong community on YouTube.

“I’ve always wanted to build things,” recalls Ben when we ask how it all began. “I realised quite rapidly that I was never going to make a living playing guitar.

I just didn’t have what it takes. I’d always been playing around, chopping headstocks off instruments, customising and repairing and I thought, ‘If I can’t make a living playing guitars I still want to work with the things’. There’s something so sexy about guitars and that world in general… I thought!” 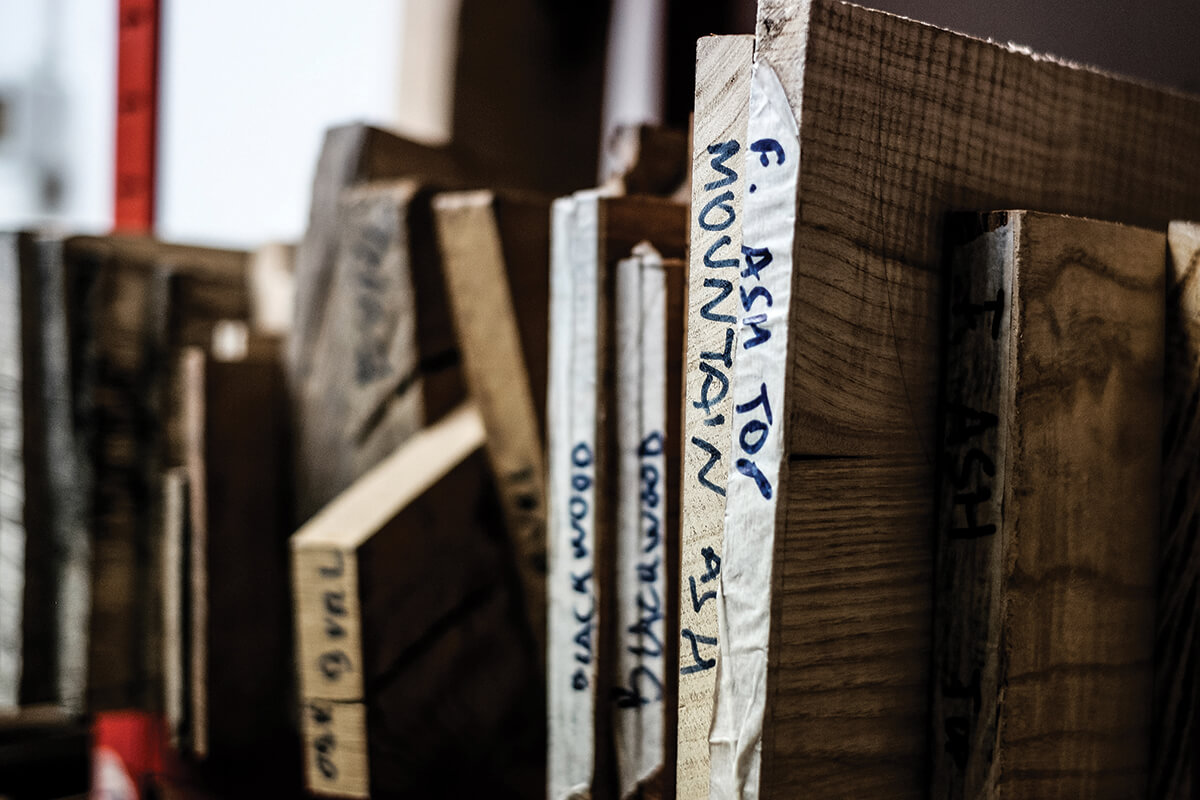 It didn’t put him off, though: “I fell in love with using hand tools and with the proper craft side of things – there’s a difference between using that level of tools versus a CNC machine or even a router and a bandsaw. But, through all of that I always wanted to build electric guitars.” 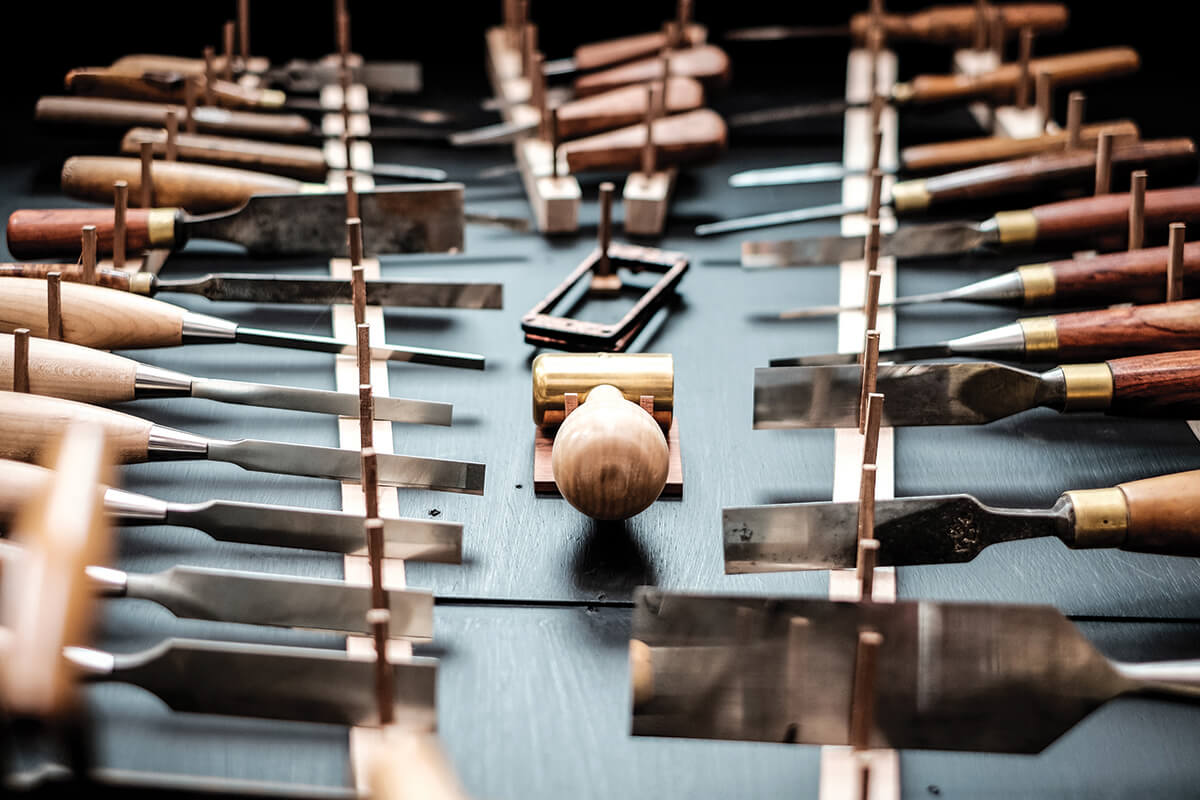 All that said, there were certain principles that were transferable from the baroque world into electric guitar-making: “The final fit and finish, especially on a production guitar, is one of the most important parts of it,” Ben affirms. “You can choose the wood, and I know that this type of wood is going to sound good, pretty much whatever I do to it, as long as my joints are good, it’s going to sound good. The last five per cent of what I do as a luthier is the first thing that the customer will see, and that’s what I learnt specifically in the violin world.

“There’s a certain amount of insanity in anybody who starts a business,” Ben grins. “From day one I thought I was going to take over the world! Absolutely! We’re going to have the biggest guitar factory in Europe and we’re going to make thousands of guitars! And this was me in a really, really shitty shed at the end of my garden with spiders dangling down from the ceiling! Even back then I thought, ‘Yeah, we’re going to do this’. And quite luckily, because there’s a lot of luck involved, we are now achieving some of the things I’d hoped for.”

See you in the court

Crimson’s growth in the physical world of sawdust, tonewood and hand tools has been mirrored by the company’s impressive online footprint. Surprisingly, Ben’s inspiration for his digital strategy came from an encounter with progressive-rock royalty. “I was very lucky. Very early on I met Robert Fripp,” he explains. “When I was brainstorming the name for Crimson Guitars, King Crimson came up on whatever music TV show I was watching at the time and I thought, ‘Ooh, Crimson, nice… strong… powerful… good for a logo, it’s red!’ So that was the name.”

Coincidentally, two or three months later, Ben’s business mentor from the Prince’s Trust happened to mention that he had grown up with Fripp. After an initial introduction, “I met him and started repairing some instruments for him and then he commissioned a guitar. My favourite thing he ever said was, ‘Ben, the luthier is the rockstar’s rockstar. Go away and build me a guitar, whatever you want.’ And I built him a guitar and it was all wrong! ‘Now go away and build me what I want!’”

For Ben, Fripp’s approach to the internet proved as much of an inspiration as his guitar-playing: “He has a blog. He takes photographs almost every single day and puts them out there on his website. And I saw that, and he has so any people who follow that, and I started doing the same thing. I started taking photographs, 30 or 40 a day, of whatever I was building, and they would go out through Twitter and Facebook and Tumblr and all of those things.

“While looking at the numbers of people who were coming to learn how to build guitars because I was documenting it, I was thinking, ‘Okay, what’s the next stage? How do I get these people to buy something from me?’ Because most of them are hobby builders who can’t afford or don’t want to buy a guitar, they want to build their own.

“YouTube was three or four years old at that point and people were saying, video is the next thing, we’ve finally got the bandwidth to utilise the internet for streaming purposes. And obviously guitar making is the only thing anybody wants to watch on video on the internet! And that was it, I thought, ‘I’m going to learn how to make video’.”

After videos promoting Crimson Guitars helped generate more orders than Ben could physically make, the company quickly expanded and now has around a dozen staff on the payroll. “I always thought that I was going to be in the workshop, in the dust, and not in an office dealing with things,” admits Ben.

Happily the company now includes managing director James Blackburn along with a director of operations, accounts manager and media manager, taking care of daily business, freeing up Ben to spend more time prototyping, experimenting with finishes and working with his beloved tools.

“I want to make things, I don’t want to be sitting behind a bank of computer screens,” Ben insists. “I am a craftsperson, I am a maker.” And long may the guitar-making continue.

Visit crimsonguitars.com to find out more about the company’s instruments, luthiers’ tools and guitar-building courses, which start at £210.