“The Strat is the most iconic electric guitar”: Cory Wong on channelling the magic of Strats into his new signature guitar

The Strat-slinging rhythm monster on how he developed his new signature Cory Wong Stratocaster, paying homage to his favourite guitar, and the ‘unique’ feature that means he’ll never accidentally knock his selector switch again. 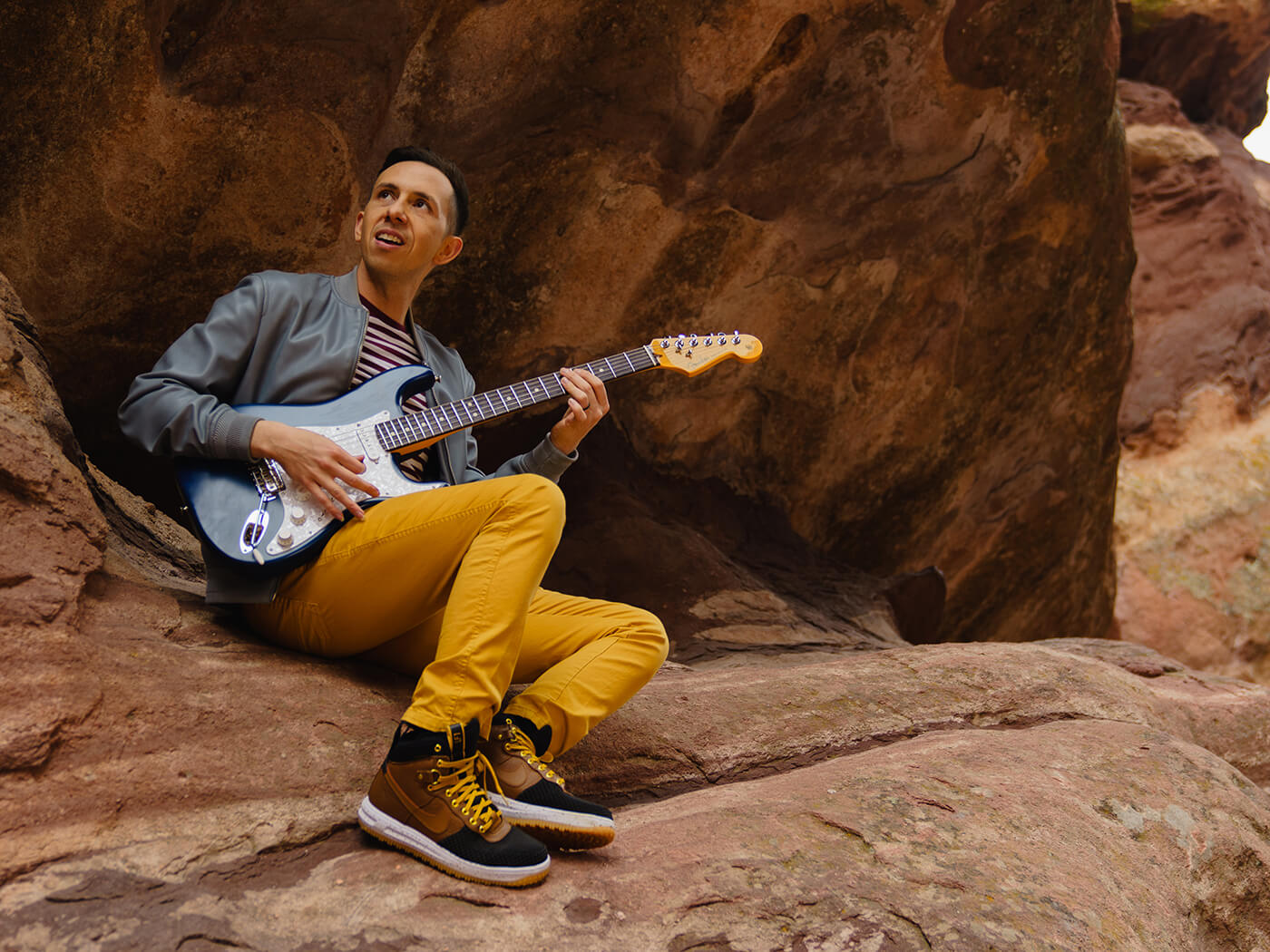 Since its explosion on an unsuspecting world in the spring of 1954 many players have explored the delights of Leo Fender’s iconic Stratocaster design. In recent years however, very few have left such a palpable mark on the instrument as Cory Wong whose powerful, deep-pocket clean playing is a vital part of Vulfpeck’s joyful funk as well as Wong’s Grammy-nominated solo projects.

Following the release of the Fender Cory Wong Signature Stratocaster – a Strat inspired by the Highway One model he’s been using since he was a teen. We caught up with the man himself to find out more.

The Stratocaster is a famously versatile instrument. What attracted you to it in the first place?

“A lot of people from my generation play around with a bunch of different guitars and I like to play Telecasters and other things too, but the way things worked out it felt like I went from being a Strat guy to being the Strat guy, which is kind of insane and really fun! I hope to be an ambassador for this instrument.

With so much variety across the Fender range, how did you approach the specs of this guitar?

“It’s true, there are so many options with the Stratocaster – you go to the store and you see 50 of them on the wall and the average person might think they’re all the same, just different colours. To me the Stratocaster is the most iconic electric guitar and there are so many subtle nuances in each model.  When we were developing this guitar Fender gave me basically a blank menu with every single spec choice possible and said, ‘What do you want? Fill in everything – there’s options for it all!’ That’s just incredible right?

“I wanted to pay homage to my blue Strat so we kept the Sapphire Blue nitrocellulose satin finish and the 22-fret neck with the Rosewood fingerboard like you’d see on a Highway One or an Ultra model and that’s my preference. I chose alder for the body. We tried a bunch of different things – I like the feel and the weight of alder. Also it looks great through the transparent finish. The wood grain is so beautiful!

“The body shape is more contoured and technically it’s something like three per cent smaller than usual. I’m not sure that most people will really notice but when I went out and tried every Strat I could lay my hands on within a 10-mile radius of where I live – I found that for my style of playing and what feels comfortable to me this option just suited me better.”

Neck carve is an extremely personal choice. What works for you?

“Fender has the Modern C and Modern D shapes and the Highway One feels to me like it’s in-between those two. The neck on this guitar is an ultra-modern D shape and the compound fretboard radius goes from 10 to 14 inches, a little more like the Ultra, and also there’s a contoured heel. I play a bunch of weird chord shapes and stretches, doublestops, all over the fretboard. This neck feels faster and little more effortless no matter where my wrist positioning is.

“When you play a guitar long enough you learn to adjust to its nuances – to compensate even just a little bit as you learn your instrument. With this guitar there is no need for that.”

You have a long-standing relationship with Seymour Duncan – this guitar is loaded with a newly designed set of your signature Clean Machine pickups.

“I had been swapping out pickups constantly for about 15 years, then I discovered the Seymour Duncan Antiquity Surf set and I absolutely loved them – pure vintage creamy Stratocaster tone and that became my favourite clean sound. That being said, when I start to push it a little bit more and dig in towards the edge of breakup, I noticed those pickups started to get a little floppy, wobbly in the top end. Just a little unstable! Of course, that’s by design, that’s how vintage pickups often respond and some people want that.

“So when I met with Fender and Seymour Duncan to develop a pickup set for this guitar I posed them the challenge of giving me the exact same clean tone as the Antiquity Surf set but with the same stability when I hit the gas as when I’m playing clean.

“Well, they rose to that challenge! They used Alnico IV magnets and the pickups are wound just a little bit hotter. Then I noticed that whenever I went to the bridge pickup or position two, it felt like the guitar would take on a different characteristic – it lost a little bit of the body.

“At that point they asked me, ‘Are you completely opposed to a humbucker?’ Well, I like the classic look of three single coils on a Strat. So Seymour Duncan made a stacked, single-coil sized humbucker that looks and sounds like a single coil while still giving me all that body and complexity I’m looking for. I’m not that much of purist – I’m just looking for the sound, I have no reason not to use a stacked humbucker and this is just perfect – game over – exactly what I was looking for!”

There can often a trade-off between clarity and character, your work is incredibly dynamic and detailed – it demands an instrument with a quick response.

“Absolutely! That’s how I landed on the alder body and the rosewood fretboard too. Every aspect of this guitar is to get that immediacy I need – to shape the transient so that you get a phenomenal response but sometimes when you’re only focused on that transient attack, that bite, it gets too spiky. The rosewood board in particular helps to round that transient out a little bit while keeping the sound characterful and musical.

“Also, when you start looking at immediacy and transient attack then the next thing to consider is the decay. I use four springs on the vibrato for stability and that means there is more reverberation from the body. I use an elastic hair tie – and we’ve included one as case candy – which I tie around the springs and that mutes them. This gives the guitar the immediacy, precision and decay of a hardtail Strat like Nile Rogers’ Hitmaker. You know, I like to address these things right from the guitar itself so that once you plug into your pedals and your amp it’s all been taken care of!”

With so much love and attention going into the sonic side of this guitar it’s no surprise to learn that you’ve added some practical wiring too!

“Yes! Okay, so, if you’re familiar with my playing you’ll know that 85 per cent of what I do happens on the middle/neck position. Also my right hand sweep is pretty wide – that’s part of my sound –  and I have traditionally used a brick wall of gaffa tape to keep the selector switch in place!

“I wanted to offer players something unique and completely functional with this guitar – so the second tone control has a push/push switch which puts you on the middle/neck position no matter where the pickup selector is at the time.

I’ve had the idea for this panic button for the longest time but I hadn’t been able to get it together – Fender solved that problem! That’s the only cute thing with the wiring, there are no coil taps or anything like that. You know, if I’m putting my signature on the back of the headstock then why not do something that’s really fun and very me!”

Given the contexts in which this guitar will be played from huge stadium shows to studio work and live streams it could be argued that you demand more of your instrument than most players!

“Well, I try not to think too much about that! I guess what helped was the fact that Fender let me be the quarterback in this case and be deeply involved in the process and I am so appreciative of them for that. It means that whatever I’m doing, whatever situation I’m playing this guitar in, I don’t have to worry about it. It just works every single time and I’m ready to go!

“It’s about joy – that is the driving force for me in music. Yes, having a signature guitar is absolutely incredible. Having a successful musical career – okay, that’s awesome too. Those are things that I am massively grateful for, but the thing that is actually more fulfilling for me is hearing that the music that I make with my friends brings people joy. That’s what I’m here for and this guitar helps me do that.

Find out more about the Fender Cory Wong Signature Stratocaster at fender.com.