You've heard about their collection at large, now learn about the stories behind some of their favourite guitars.

Earlier this week, we spoke to Jay Edema and David McArthur about their jaw-dropping collection which numbers at over 770 instruments. In this instalment, Edema takes us through the fascinating stories behind a choice few guitars, ranging from a 1990 Gibson that was supposedly made for Jimmy Page to a 1979 Peavey prototype. Learn more here: 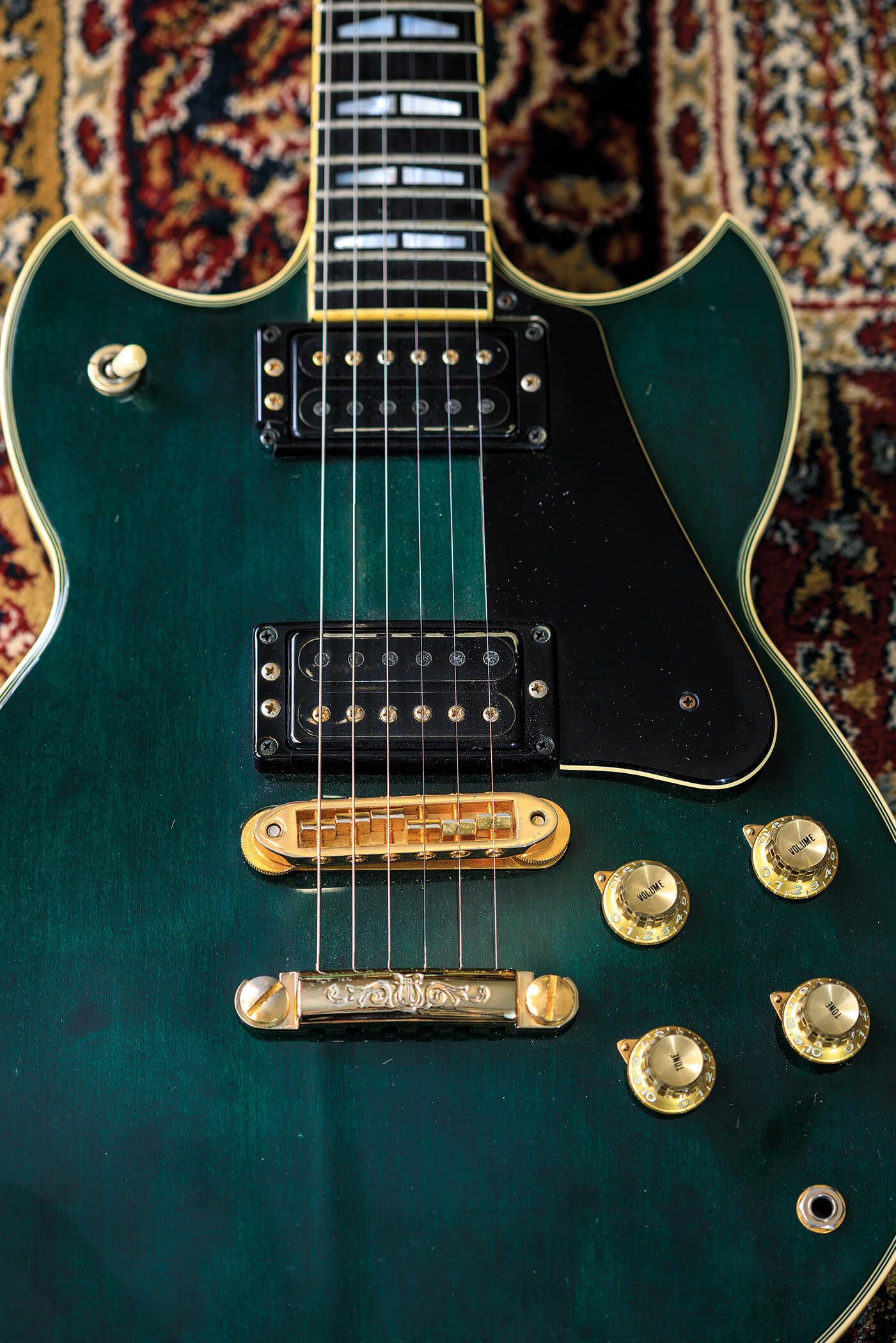 “This was developed from the SG-175 line. Carlos Santana helped with the development of the SGs to such a degree they became contoured bodies at the back, through necks and a sustain block was put in underneath the bridge. It has a hard ebony fretboard which makes it easy to bend strings. It is a very resonant guitar and heavy as hell. The ‘S’ stands for slim, which means it has a slighter slimmer tapered neck. It is a great guitar with great pedigree from the master builders at Yamaha.” 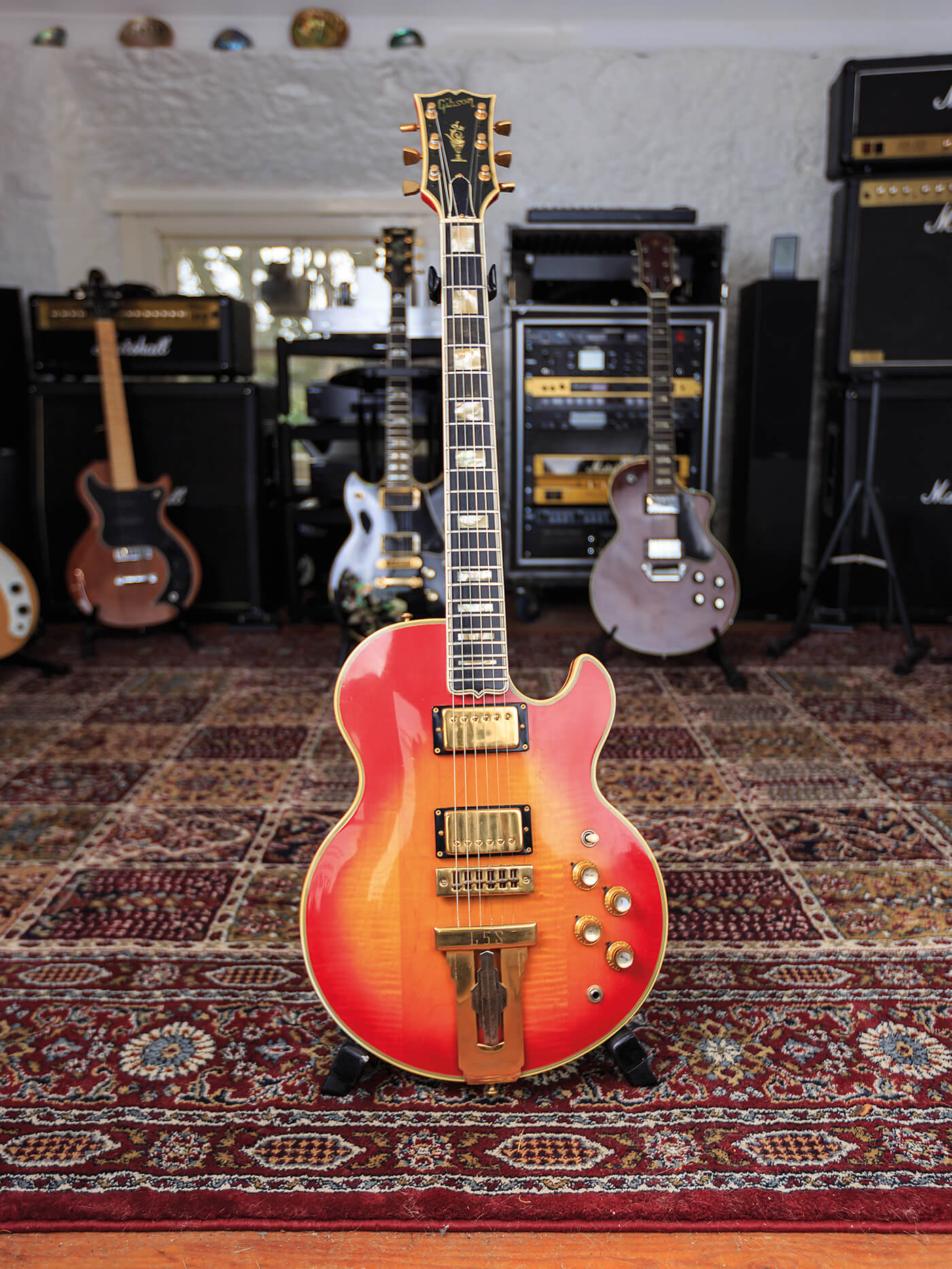 “These started with low-impedance pickups in 1972-3, but this one has the standard Gibson humbuckers. It’s a very heavy guitar and a lot of work has gone into it. It has a trapezoid tailpiece and concertina bridge. The guitar has a 22-fret ’board heavily adorned with abalone and double binding. It looks like a jazz guitar, but it isn’t. It’s a solidbody and bigger than a Les Paul. It’s a lovely guitar and one of the best in my Gibson collection. It’s definitely a keeper.” 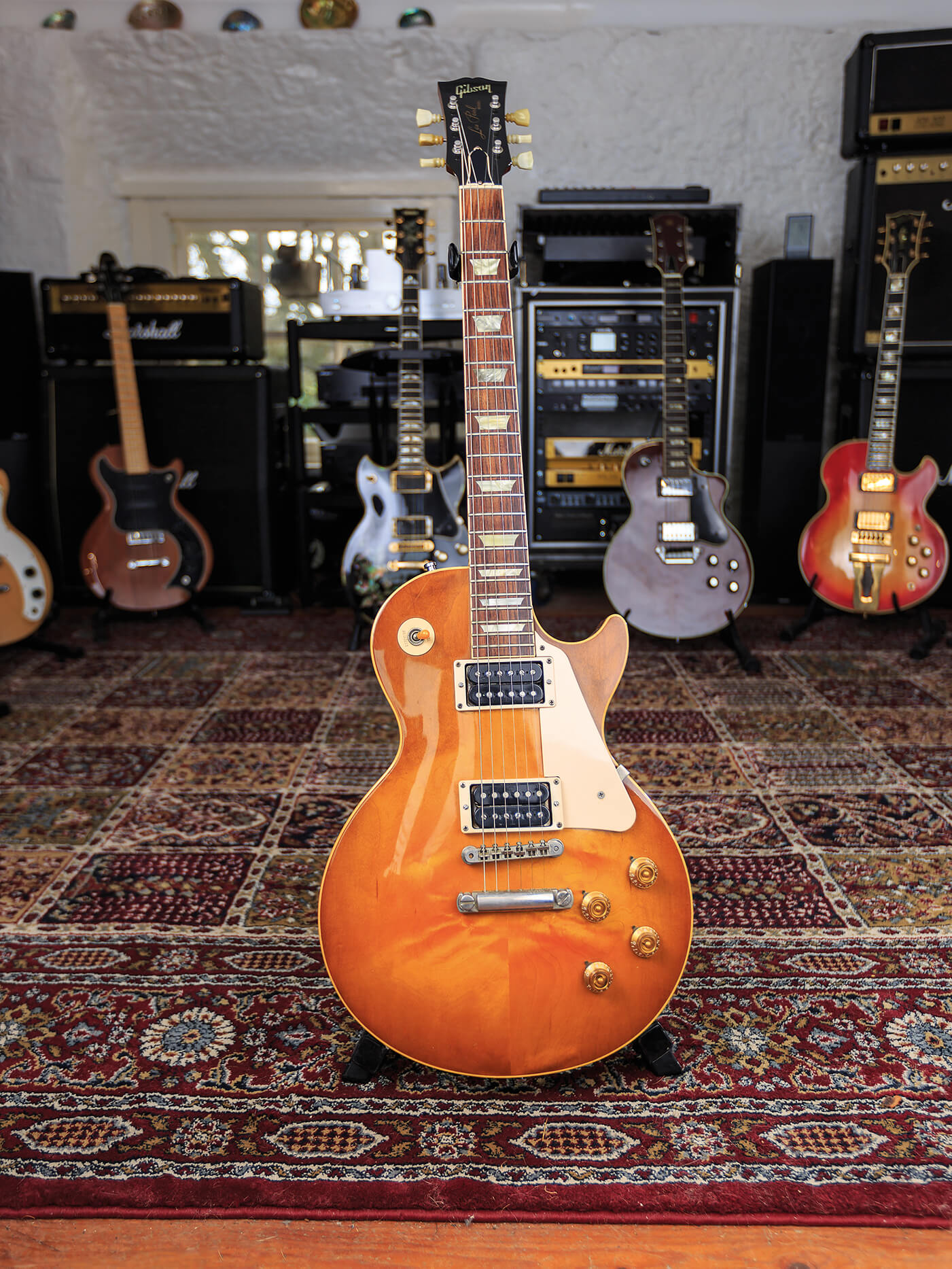 “This one has a special story. I got this guitar in 2017. You could say it’s a reissue, but it’s not. It’s a custom-made guitar that was apparently produced for Jimmy Page. There is some paperwork to suggest this is the case, but on the back of the headstock, it says ‘Promotional Use Only Not For Resale’. So this is not your run-of-the-mill production guitar. It’s a Lemon Burst Les Paul Classic, so it has a slim neck and standard mahogany body with a maple cap. It’s a Custom Shop job. According to the previous owner, it was one of five and it has a built-in wah-wah system. It’s a wonderful piece of work, one of the nicer guitars in the collection. A few people have indicated they would like it, but I think I’ll be reluctant to sell this one!”

“This is an old guitar. You can see that the finish has started to crackle. It has a maple neck and rosewood fingerboard. It’s a great guitar that has had some wear and tear on the body. It’s not pristine, but then again, who wants that? It’s a player’s guitar.”

“It has the SG shape, but it’s not what you think. One volume, one tone; it’s the Gibson SG in its most simple form, but it’s called a Les Paul. The word on the street is, Les Paul didn’t like the shape. This is the Junior version with a single P-90 and some modifications. The original tuners, for example, would have been three and three connected together, but these look like Grovers. This may be the third set of tuners on this guitar. The fretboard is rosewood, but as this is the 1961 model, it is likely to be Brazilian. The finish has a nice checking pattern that guitar collectors love.” 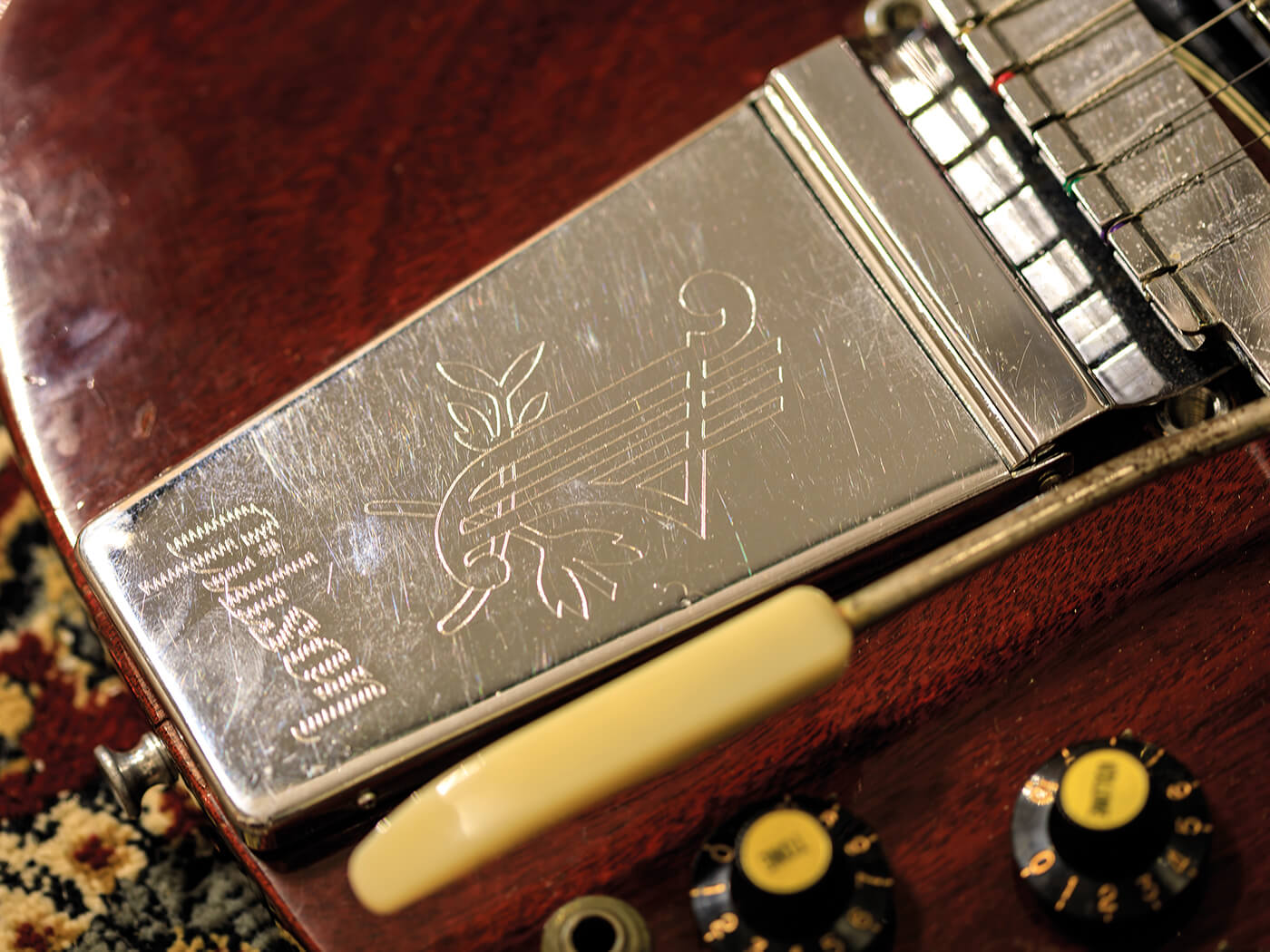 “This is a Gibson SG with a tremolo. It oozes vintage, despite it having some mods done in the past and then rectified. The trem system looks original, although someone had a fixed bridge on it and now it’s back to what it was before. Nice and functional.” 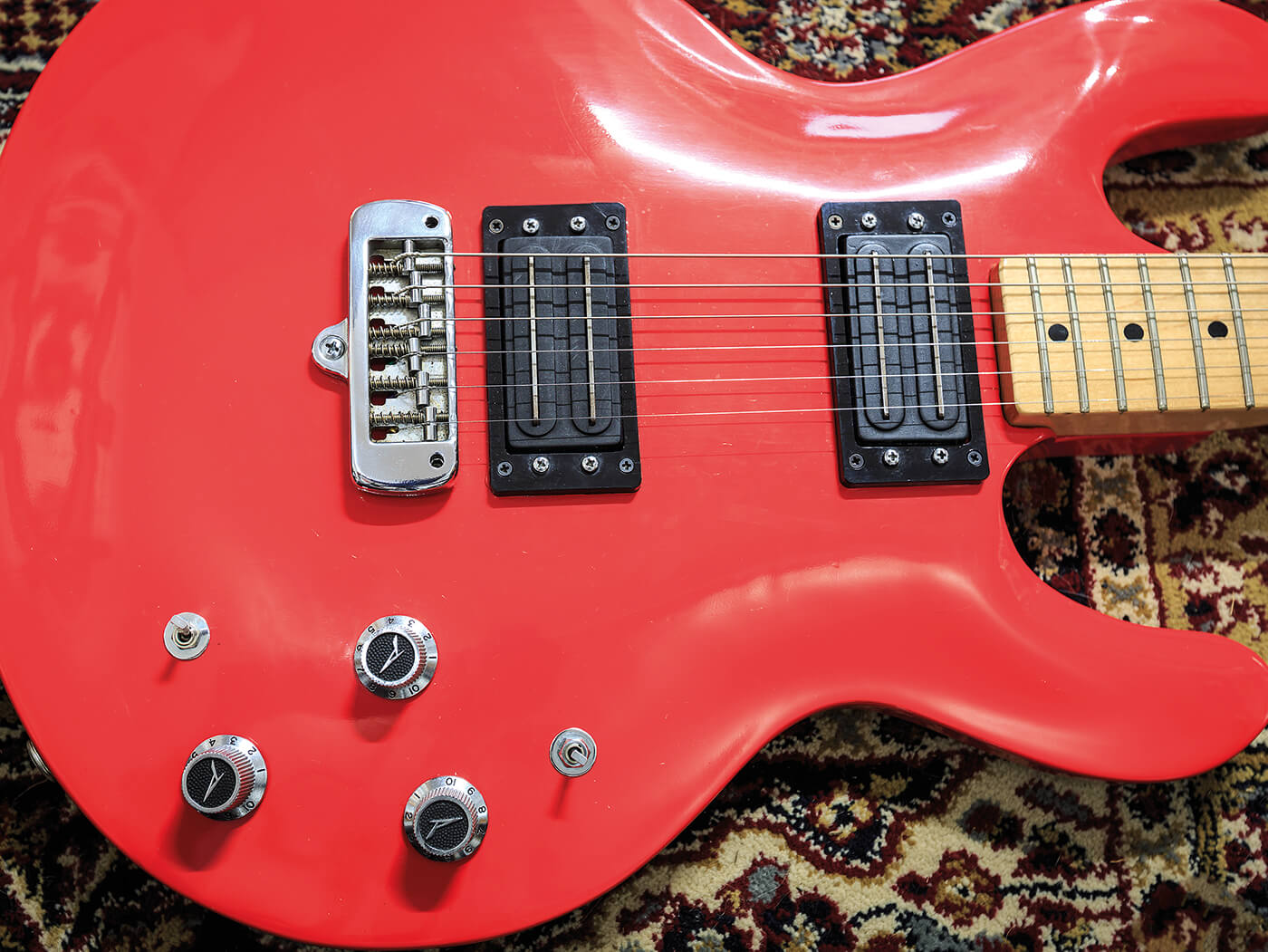 “This is a strange beast. People often ask me what is a Peavey doing in a vintage-guitar collection? It was designed by Chip Todd, who was one of the designers working for Peavey in the US. It’s a prototype of what would become the famous T Series, which started in the late 70s and ran until the 1980s. I did a bit of digging around and found out it was one of three prototypes built for Hartley Peavey, the CEO of the company. It has an all-maple neck and a resin body. This one was sent to a distributor and somehow found its way to a collector in Glasgow and then on to me. This is a unique piece of guitar history. It’s not an expensive guitar, but it is unique and it’s going nowhere.”