Dropkick Murphys have traded in their fiery Celtic punk for an unamplified acoustic album based on unpublished Woody Guthrie lyrics. Founder Ken Casey tells us more.

With more than 25 years behind them, Boston’s Dropkick Murphys are proper punk veterans. Their latest album, though, is something entirely new for the band while also trading on an act much, much older. This Machine Still Kills Facists is a collection of 10 songs based on unpublished lyrics penned by the late, great Woody Guthrie.

The Celtic band are well known for their blasts of amplified, flesh-tingling guitar. But you won’t hear that here. The album doesn’t feature a single amp. Instead, Dropkick Murphys did the most punk thing they could think of by presenting Guthrie’s anti-fascist, proudly working-class lyrics against a purely acoustic backdrop.

The record is named after the words Guthrie scrawled on his guitars in the 1940s during the Second World War: “This machine kills fascists”. “As a weapon against ignorance or hate, music can cast such a wide net in terms of reaching people and garnering their attention, more so than a news article or something,” says Ken Casey, the Murphys’ chief songwriter, in his earthy Bostonian accent with a vaguely Irish lilt. “It can come at you in a more subtle way.”

The band has seen significant line-up changes since forming in 1996 but founder Casey has always been at its core. The original line-up – Mike McColgan on vocals, Casey on bass/vocals, Rick Barton on guitar, Jeff Erna on drums – played in the basement of a friend’s barbershop before taking their raucous Irish-folk-infused punk rock on the road. A year after forming and a few EPs later, the band were signed to Hellcat Records and, together with producer Lars Frederiksen (Rancid), released debut Do or Die in 1998. McColgan quit mid-tour the same year. Al Barr took his place.

As for guitars, Casey says “the guys broke out the good ones for [This Machine Still Kills Facists]”.

Brennan relied on a 1968 Gibson Country Western, a flat-top acoustic also beloved by Sheryl Crow, only with a narrower neck and a lighter build than the original late 1950s version. Lynch wielded a 1960s Gibson J-45, with its golden mid-range and full, juicy bass, as well as a small-bodied acoustic Martin 000 for a couple of overdubs. The power of the album, however, lies in the history rather than the instruments.

Woody Guthrie, who passed in 1967, was a pioneer of American folk, lauded for his ability to wield poetry like a weapon in the fight for socio-economic justice. He fought for peace even when his country didn’t want it. When the Second World War broke in 1939, Guthrie moved from Texas to New York, where he wrote and recorded Dust Bowl Ballads in 1940, a record that recounted the Depression-era dust storms in his home of Oklahoma in the mid-1930s, which had driven many of the young and working Okies to California in search of work. Though not part of that record, the same year, he released the iconic song This Land is Your Land.

“It took us 26 years to get around to doing this,” says Casey. “I don’t know whether we would have been ready to do it any sooner. The plan had been to do this album for 20 years, ever since we went down to the Guthrie archives [in New York, at that time]. But if we’d done it when we first talked about it, it probably would’ve been an album that sounded like our normal stuff. It was definitely a challenge when we got to the studio and decided not to use any amplifiers. It’s one thing to do an acoustic album, it’s another thing to not even go through an amp.”

Without the amps, pedals and the wall of electric noise, there was no room for messing up a lyric, missing a beat or delivering a line without integrity. Rather than effects, the band relied on a few other old-school studio tricks to create unusual sounds.

“For little parts where we wanted the guitar to sound overdriven, we ran a piece of paper through the strings to create an overdub,” says Casey. “It creates a buzzing effect. Obviously, it mutes some of the strings so it has to be done in an overdub format, but we used that in Talking Jukebox and Cadillac, Cadillac during some of the instrumental passes, for more oomph. We used a lot of cool little tricks to get whatever extra boost we could but for the most part the intensity had to be gained through the delivery and through the arrangement of the songs. It made us a better band, for sure.” 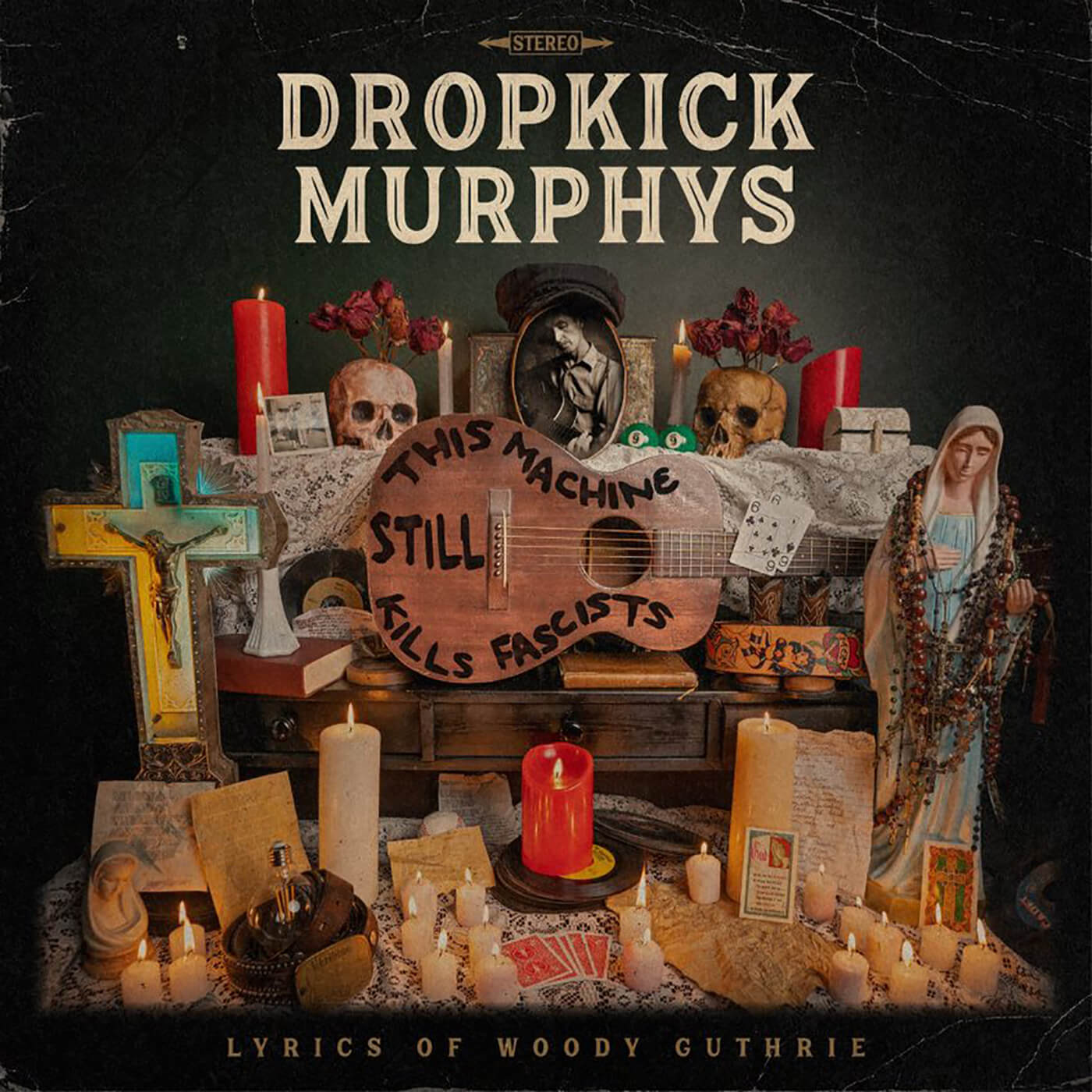 Guthrie’s daughter, Nora, had been collecting her father’s lyrics for Casey and the Murphys, recognising Woody’s spirit in these like-minded rebels. Involved throughout, Nora and her daughter Anna Canoni were co-conspirators with the band in their choice of lyrics and the realisation of them.

There are some other high-calibre collaborators too, including Nikki Lane, Dom Flemons, and Evan Felker, forming more than two decades of links between the band and Guthrie’s legacy – Dropkick Murphys made reference to Guthrie’s lyrics and ethos as far back as 2003.

“We first went to the archives in 2001, and took 10 or 11 unpublished lyrics,” says Casey. “But at that stage we were so busy. We toured for nine months a year and put out an album a year.”

Those unpublished lyrics debuted on the Murphys’ 2003 album Blackout, on the song Gonna Be a Blackout Tonight, as well as on I’m Shipping Up to Boston, their most beloved track, from 2005’s The Warrior’s Code.

That 2001 meeting at the archives established an ongoing friendship between the band and Nora. Casey recalls holding the original handwritten lyrics, to which Guthrie had attached anecdotes, dates and places for future reference.

“Woody would always write a little anecdote or a sentence about anything that was on his mind when he was writing it but, at the same time, it was a puzzle because he never wrote the music down, so we had to say, ‘How should this sound?’”

Though the band eschewed amps, you’re never likely to mistake a Dropkick Murphys album for the folk of Pete Seeger or Nick Drake – even an acoustic one. There’s nothing soft about this emotional, political gut-punch of an album.

Of the 20 songs recorded for the album, half made the cut. The first cut, that is – there will be a second volume soon. The Murphys are confident, then. And why shouldn’t they be? If any band could put Guthrie’s puzzle together, it’s them.

“We mostly stuck to the instrumentation we always used,” says Casey. “On Talking Jukebox, we used the tuning pegs on the banjo to create a guitar solo sound, but it was tuning and untuning the banjo pegs on the fly. We concentrated on rhythms and opposing rhythms. You can’t just ring a loud powerchord, you have to get into the nuances. There weren’t so many new instruments used but the way things were mic’d was different.”

The amp-free album shouldn’t have come as an entirely alien concept to the band’s fans either – last year’s Turn Up That Dial featured acoustic elements too.

“Our last record had a lot of acoustic songs and only one electric, so it was a lot more acoustic in the percussive sense,” says Casey. “We’d already taken it in that direction and now we’ve stripped it back farther. The goal was to do an acoustic but have it be powerful. We didn’t want to sound like a bunch of guys on stools in a pub. There’s nothing wrong with that but that’s not what we were going for.”

Guthrie’s lyrics may have gone unheard for more than 50 years but their sentiments are disturbingly relevant to the fractious world of 2022.

“Who woulda thought,” muses Casey. “I’m sure Woody wouldn’t have wanted his songs to be so relevant because it means bad times have come around in certain areas.”

Dropkick Murphys have always been a political band. Casey acknowledges that this album and the next volume represent an even harder shift to the political left, which not all fans will appreciate. But the Murphys founder believes that the band’s fans are at least willing to listen.

“If you perform with good intentions and integrity, even if people don’t agree with your message, they’re more open to receiving it,” he says. “A lot of the time, my discussion with fans is about how the music lifts their spirits and gives them hope. The core fans of the band always look a little deeper into the heart and the energy of it. People in this day and age only read the headline, not the full story. We’ve already had people go, ‘What’s going on here’?. But this is a project, taking Guthrie lyrics and trying to do something different. The feedback so far has been really good. A lot of these songs we’ve rehearsed and will sound really good electric live in the future.”

That’s the plan. The band kick off their five-week acoustic tour of seated theatre venues across 30 US states in October, before returning to the full kit-and-caboodle amped-up punk-pirate rock show that fans are accustomed to for future tours. Meanwhile, the acoustic tour, like This Machine Still Kills Facists, is a whole new experience.

“This tour is all seated theatres and we’ve never done anything like that before. We thought with this thing, we’d create an alter ego. So [from here on] one out of every five tours is seated in a theatre, doing it acoustic. It’s important to give people different experiences. You don’t want to play the same venue in each city every time. We’re trying to create some diversity.”

That said, just as politics is in the Dropkick Murphys’ DNA, so is big, fast, loud Celtic punk.
“We’ll never get away from that,” says Casey. “That will always be our main sound because that’s what we do best.”

This Machine Still Kills Facists is out now.