Gibson’s Generation Collection acoustics have been 57 years in the making. We speak to Cesar Gueikian and Mat Koehler to find out how a soundport concept from 1964 finally came to fruition. 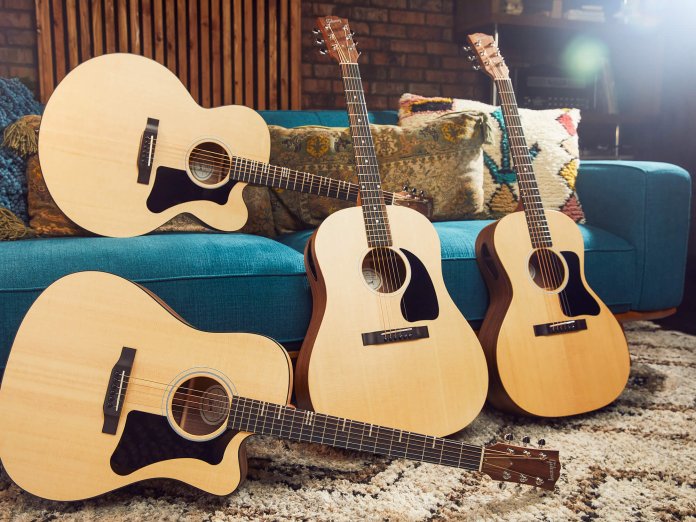 One of the joys of taking the helm of a heritage brand such as Gibson must be having unfettered access to the company archive, which in this case spans back as far as the late 19th century. Imagine the sense of wonder, then, that came with the discovery of a blueprint in the Gibson vaults from 1964 illustrating what was, for the time, a startlingly innovative approach to acoustic guitar making.

Labelled the Modern J-45, the blueprint depicts the familiar outline of Gibson’s iconic slope-shoulder jumbo with some surprising additional features – most notably a large, circular soundhole in the lower side of the guitar. Rather like fanned frets and body bevels, soundports have been a not uncommon sight in modern luthier-made acoustic guitars since the late 1990s, but this is Gibson we’re talking about… in 1964!

From the initial spark of inspiration provided by the Modern J-45 design came the idea for a new line of boundary-pushing acoustic guitars. Hand-made at Gibson’s dedicated acoustic facility Bozeman, Montana, the Generation Collection mixes over a century of instrument-making experience with modern techniques and player-friendly features. 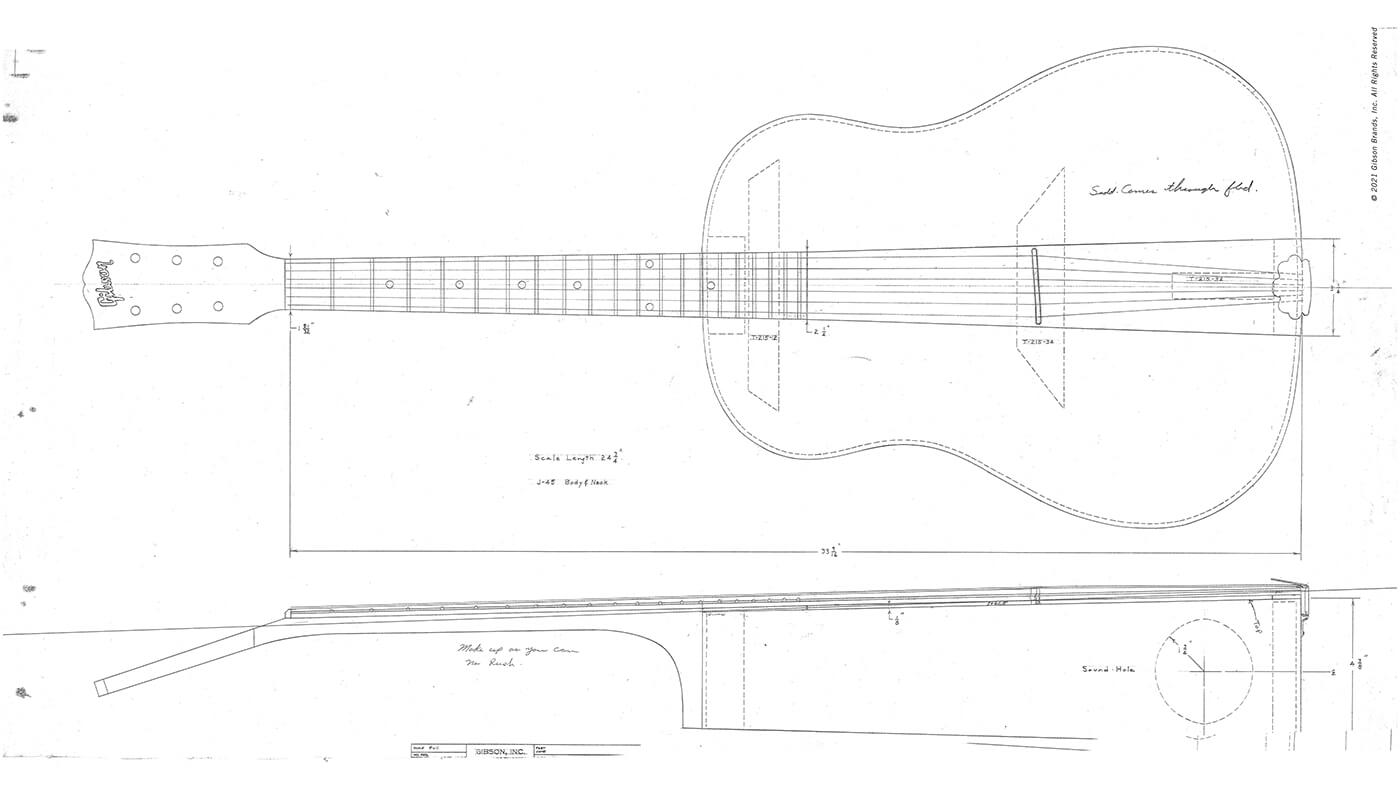 Gibson Brand President Cesar Gueikian tells us how it all began. “One day,” he recalls, “Mat Koehler [Gibson’s Head Of Product Development] and I were looking through our archives here in the Gibson vault, and we found this blueprint of a J-45 with a soundhole projecting up to the player. There was no soundhole in the front of the guitar at all.

“We were inspired by this to explore the concept in the Generation Collection that we are introducing now in 2021 but it’s a project that goes back to one of the most creative periods of Gibson’s history. This was inspired by that original blueprint from our golden era back in 1964.

”You know, the classical guitar is built in a way that projects to the audience, that’s how it should be. But over the years, various luthiers and guitar companies have experimented with sound holes in different places, especially on the sides. There is a lot going on in this new Generation Collection but the biggest innovation is the Gibson Player Port which, as you can hear, gives you a full sonic experience – it gives you more of you! You get to hear your playing, just like the audience would.” 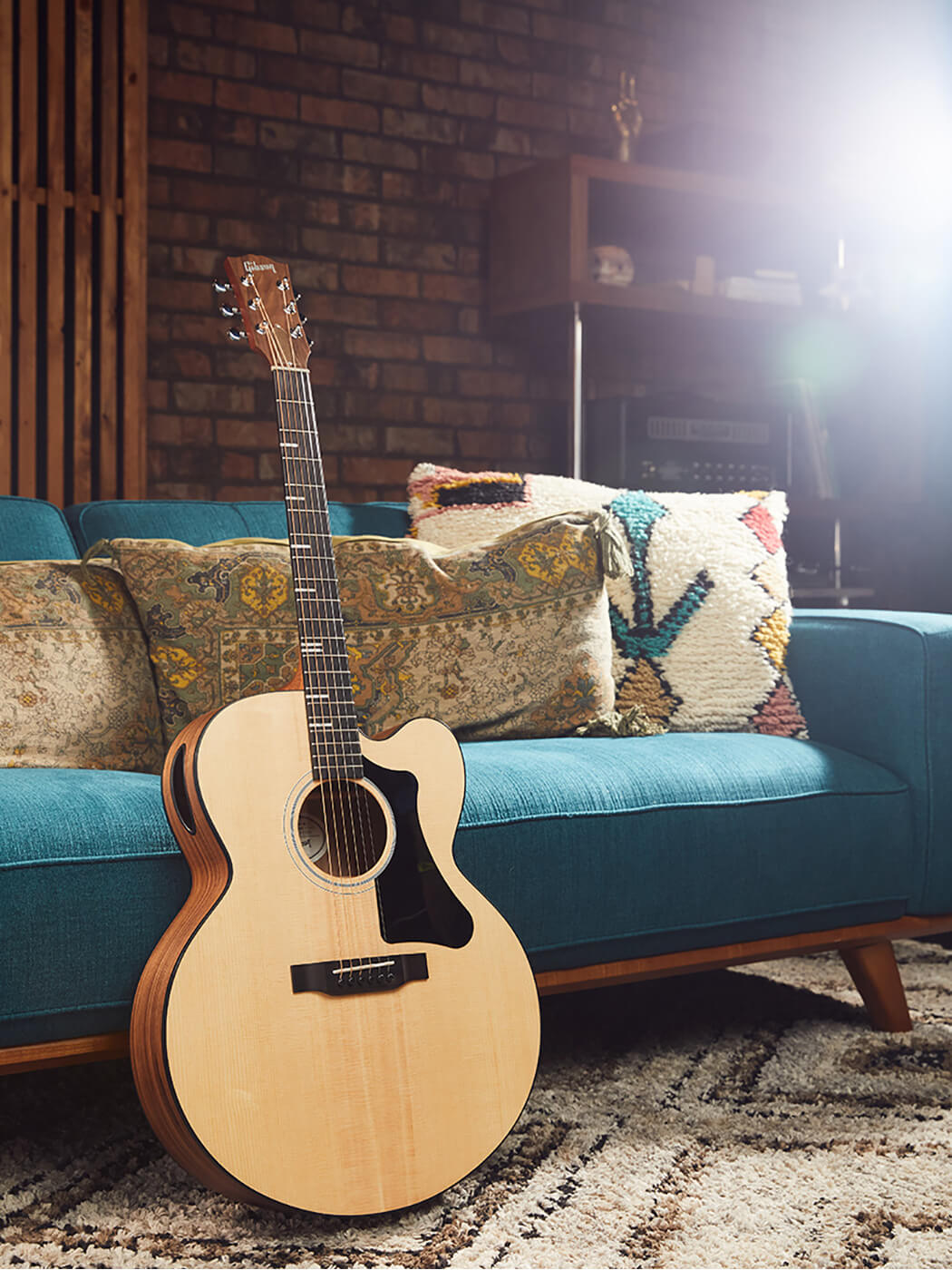 A man whose Instagram feed is full of devastatingly beautiful one-off vintage Gibson and Epiphone instruments, Mat Koehler looked at this discovery as a scientific and creative challenge. “Really, this is an investigation,” says Matt. “We started with an observation – this incredible blueprint from 1964 – then we researched the topic area. What was Gibson pursuing with this idea at that time and what were they finding? And then we had a hypothesis that we could make it better. The next step was finding out how, and with our modern technology we made many advancements in understanding the sonics and construction of acoustic guitars.”

It’s certainly tempting to wonder what Gibson’s 1960s design team might have been looking for in that extraordinary, experimental approach. Mat Koehler thinks he knows, if not the expected outcome, at least the intent that went into the first design.

“That original blueprint stands out from the pack,” Mat remarks. “They’d actually labelled it the Modern J-45, which is interesting because they used an archtop-like set-up of a bridge and tailpiece which was not necessarily the most modern approach, even back in 1964. My understanding from the blueprint is that they were trying to explore wildly creative new takes on acoustic guitar design while still using classic Gibson shapes.

“Not coincidentally, that is the same intention that we approached this project with. We wanted to do something new and exciting with designs and materials but without straying away from our identity. While it may be game-changing news to the guitar world in general that Gibson may have been the first company to explore soundport techniques, it’s not exactly a surprise to us to see evidence of just how focused on innovation Ted McCarty and his team at Gibson were at that time. Looking at the work of the period you could see that it was game on – they were an incredibly creative force. 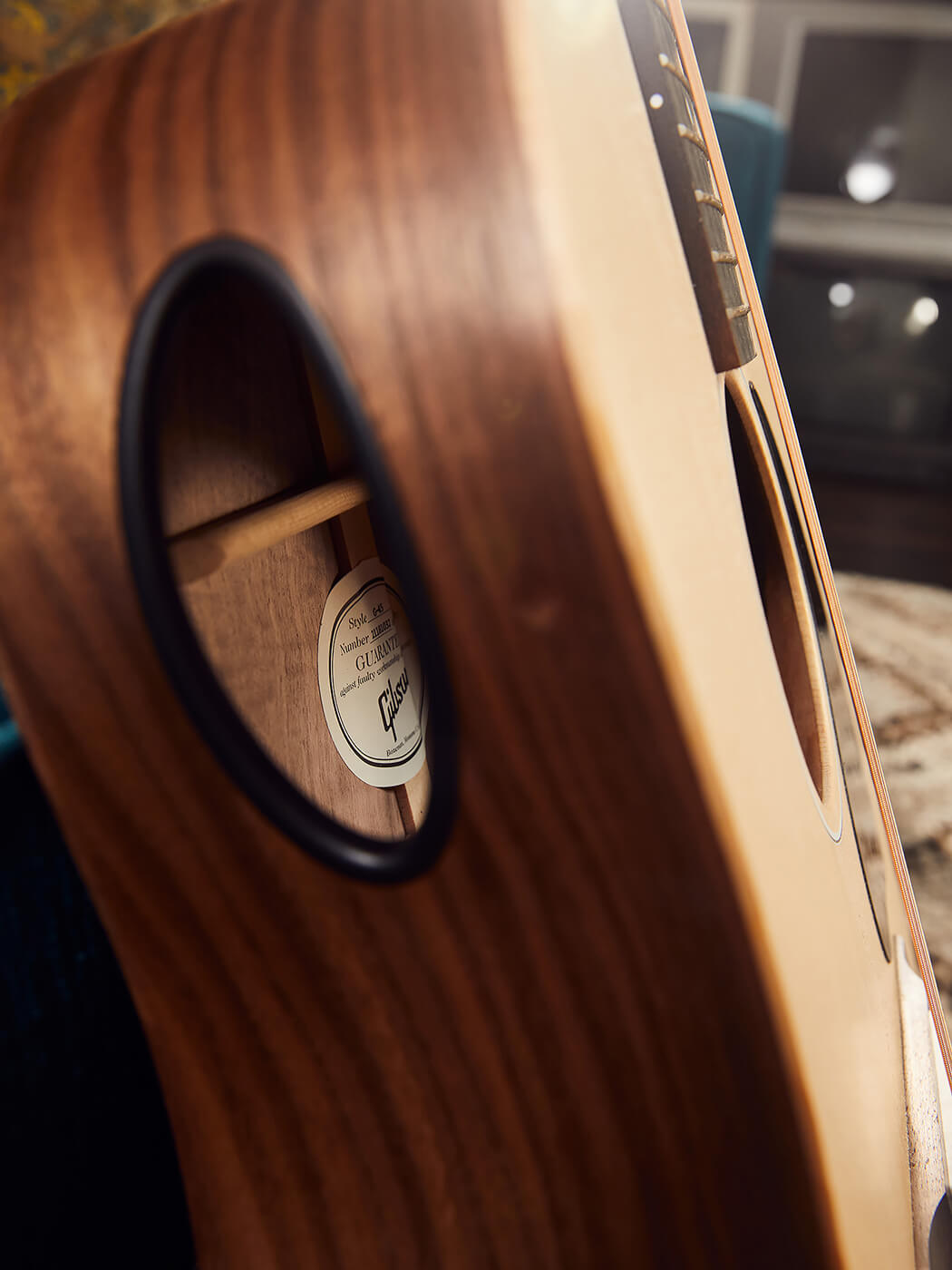 “This is something that is clearly authentic to Gibson’s innovations so why not explore it in the 21st century – we felt a sense of responsibility to find out!”

Getting from an initial prototype to the launch of a whole new line is not a simple process, of course, but with Gibson’s new leadership team driven to honour the company’s heritage, for Cesar Gueikian, it felt like a natural progression.

“The last three years have been a celebration of craftsmanship – of what has made Gibson such a historically important company. We make handcrafted instruments in the USA and we are proud of that. Our acoustic guitars, made in Bozeman, Montana, are resonant, vibrant instruments that project amazing sounds. This is indicative of how we are paying attention to every aspect of the construction.

“After we built the first prototype we went into thinking mode in the Gibson Lab. How would we bring this to life today? So we started testing with different tonewoods and designs – we were really getting excited by this point! What was really amazing was how well our traditional acoustic guitar-making techniques worked with this design. Yes it may have some very modern aspects but it’s the same bracing, the same voicing, the same degree of a dome to the top, the same hide glue – the same way we’ve been making guitars since Orville Gibson!”

Bringing the creative power of the Gibson Lab to bear, Mat Koehler began to translate the McCarty-era vision to the 21st century with an extensive run of prototypes which would bring the concept up to date. 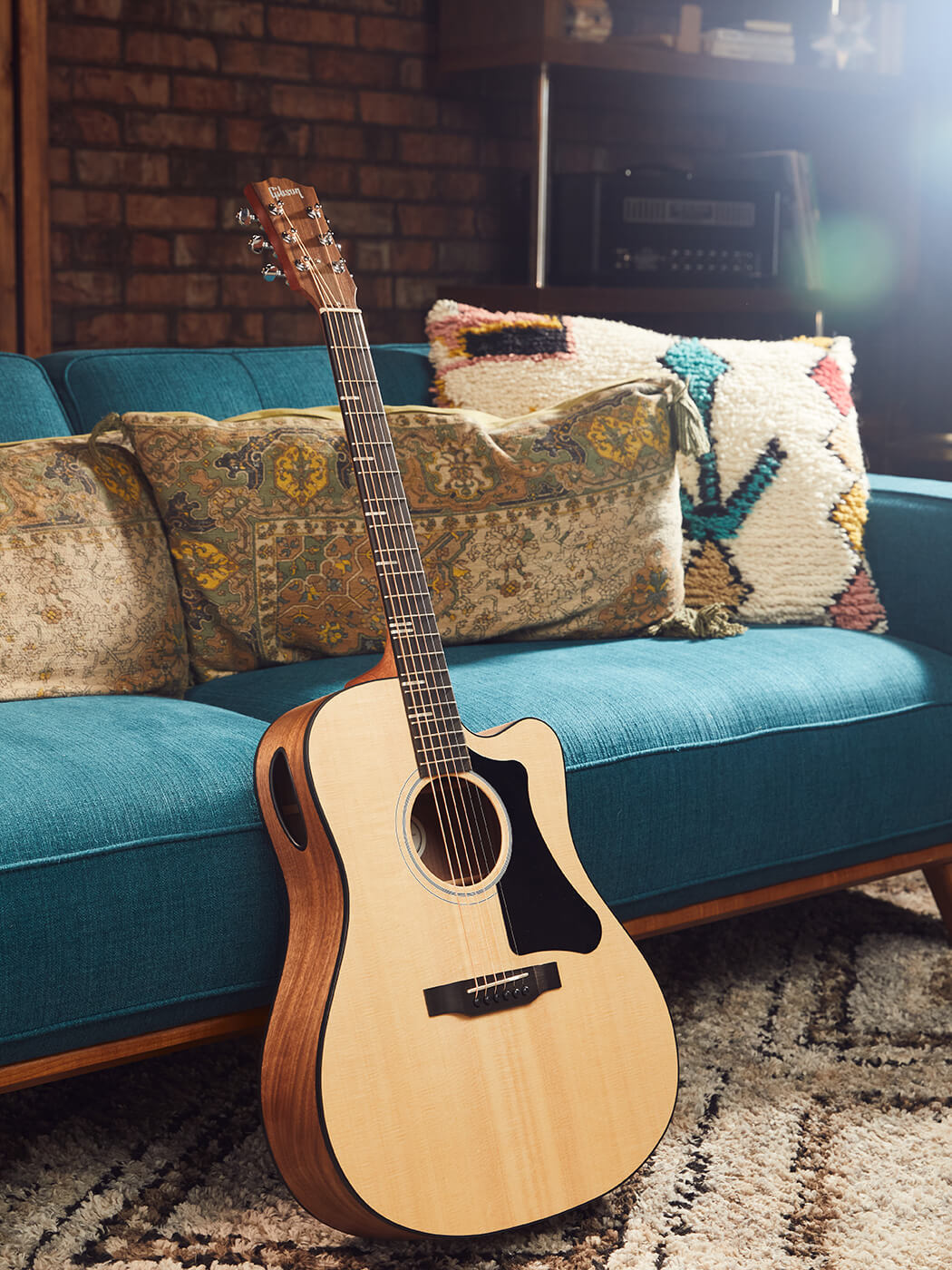 “There was a lot of research and development with different soundhole locations, shapes and sizes,” says Mat. “The designs definitely changed because we were trying to harness the full power of a Gibson guitar. We tried a lot of different woods too but we knew we wanted something that was readily available and sustainable and obviously walnut is at the top of the list there. It’s such a beautiful wood, both sonically and visually. Some of the best Montana guitars I have ever heard were made from walnut – I also have a 1973 Epiphone FT79 made from walnut that I just love. It splits the difference between mahogany and rosewood, when used in a Gibson design, in such a beautiful way. It’s just killer!

“Once we had established that we would be using walnut we were able to design the whole range around that fact. The shape and location of the soundhole, everything was informed by the sonic characteristics of that wood. The aesthetics are important too – we didn’t want the body wood looking wildly different from the neck, for instance. We wanted an elegant look that would play well within the Modern Collection.

“After a long time spent testing and researching we completed the final prototypes and they blew everybody away here in Nashville! Everyone was using the same words to describe the new guitars – immersive, you can hear more of your playing. It’s funny, everyone had a similar response, so it was really exciting. We knew we had something special at that point but I’m not sure we even understood the scope of it at the time. That this could be a really important addition to our range.”

Gradually the Generation Collection concept began to crystallise with an emphasis on high-performance, ergonomics and sustainability – not an easy balance to maintain in the modern world, as Cesar explains.

“We were able to evaluate and evolve the design in our lab where we do all our research and innovation and now we’re bringing it to players around the world. The challenge was creating a guitar for the next generation of players – it has to be something that is really comfortable to play, with a great neck and it has to be offered at an accessible price point. But it also has to be a forever Gibson, just like every guitar we build – they’re made as forever guitars.

“Because of the tonewoods that we selected – walnut back and sides with Sitka spruce tops and utile necks with striped ebony fingerboards and bridges, and the super-thin satin finish that we used – we are able to offer this new sonic experience at a new price-point.”

With the Generation Collection now launched worldwide and a rumoured line of accessories to come, we wonder about Gibson’s plans for the future. Will there be other wood options? Will we see Player Ports in other lines? Perhaps unsurprisingly, Cesar won’t be drawn into revealing much at this stage.

“Oh man, we have so many plans that we can’t wait to share!” He says. “That’s why we have the Gibson Lab in the first place. It’s there for us to explore and test and we will continue to innovate and get great guitars into the hands of our artists – get feedback from them and continue the process. We have a new generation of players who love Gibson guitars and they inspire us to offer something new and wonderful but also highly complementary with our existing portfolio architecture in terms of Custom Shop, Historic and Modern acoustic guitars. This is a great addition to the Modern Collection!”

Find out more at gibson.com.