Sparkes is well aware of the responsibility he’s assumed since buying Gordon Smith four years ago. But the UK brand’s rebirth and reinvigoration might never have happened if not for some speculative post-pub googling.

How many of us have found ourselves browsing Reverb or eBay after a few too many drinks and, a few days later, answering the door to the postman only to discover we’d tipsily bought something we hadn’t planned on? One evening a few years ago, Auden Guitars owner Doug Sparkes took online shopping to a whole new level when he placed a bid for something a little larger than a new effects pedal.

“When I bought this building, the idea was that half of it was going to be the Auden office and workshop, and the front half I was going to do up and rent out as a shop,” says Doug, as we tour the old Co-operative building in Higham Ferrers that’s now the workshop and HQ for both Auden and Gordon Smith.

“I got home from the pub one night and I was thinking, ‘Is there something else to do with guitars that we could do to fill that space?’ So I searched ‘Guitar business for sale’, thinking there might be a retailer that could move into it or something, and on my screen came ‘Guitar manufacturer for sale, Manchester’. I thought, ‘That can only be Gordon Smith. It can’t be anyone else!’ So I made contact with John Smith and, over a couple of days and about 1,000 cups of tea, we did a deal for Gordon Smith to join the Auden family and moved it all down to this workshop.”

Gordon Smith has been a British guitar institution for nearly half a century now but, for Doug, the chance to take on the brand’s legacy held a special significance.

“I grew up with the back end of punk rock and I was a big Buzzcocks and Pete Shelley fan,” says Doug. “I always say he was the father figure for Gordon Smith, because he was such a great ambassador for the brand. I grew up loving bands that played Gordon Smith guitars.”

Doug’s love for the history of the maker is evident – the first-ever Gordon Smith guitar hangs pride of place on his office wall – but it’s clear that this process is about more than merely keeping a venerable name in UK guitar making alive: it’s about the industry as a whole.

“Gordon Smith is extra special to me because of its history and its heritage but we want to ensure that British guitar building has a future, not just Gordon Smith,” says Doug. “We still do everything by hand. We don’t have any CNC machines, it’s all templates, hand tools, sandpaper and sore fingers. We still make all of our own pickups in-house, using the same wiring patterns that John used. It’s still 100 per cent hand-built British guitar.”

If you’re going to hand-build a guitar, you need luthiers. Today the shop is bustling with young men and women working under the stewardship of head luthier Rob Bowman, but it hasn’t always been easy to find them. 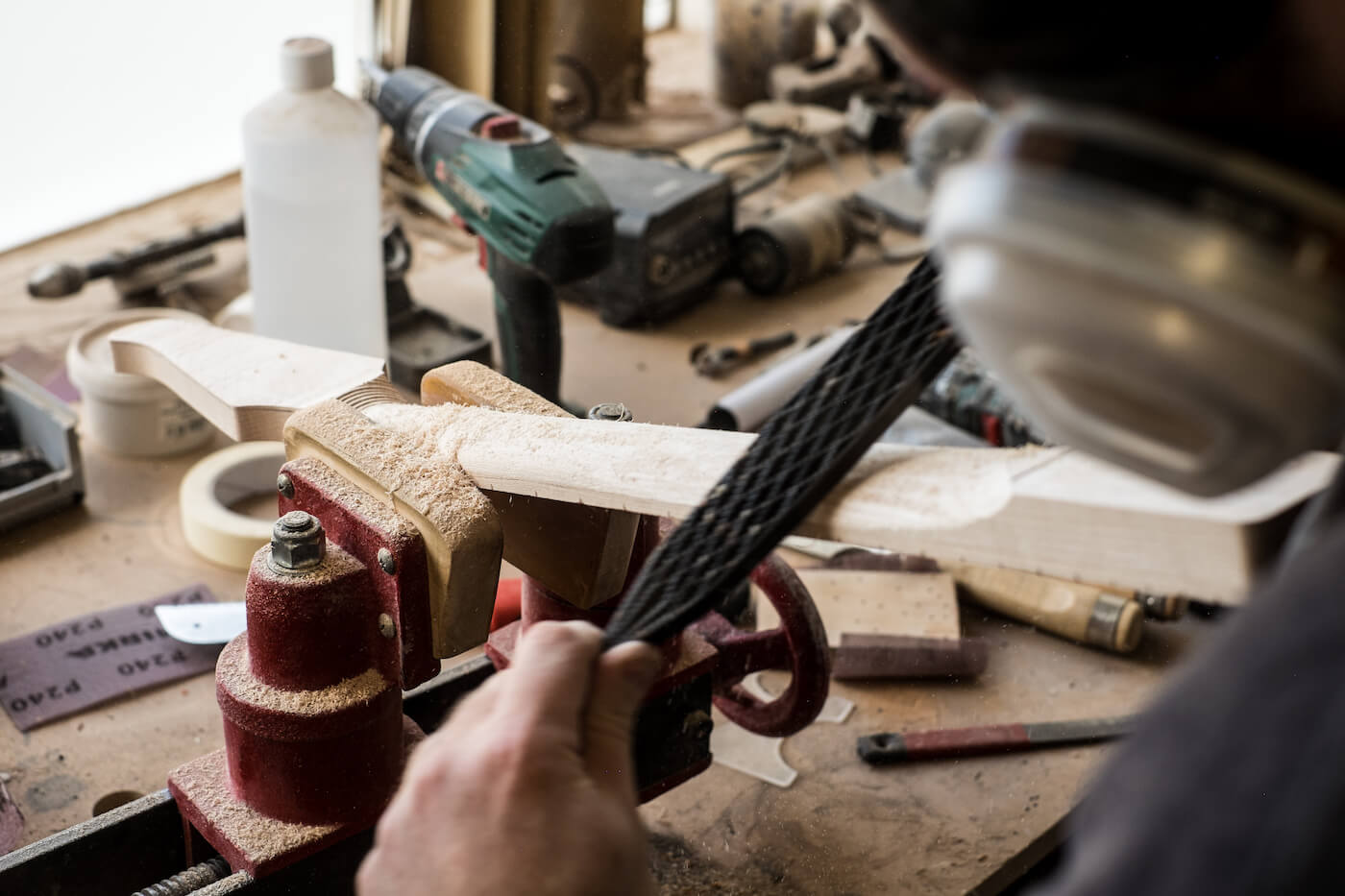 “There aren’t hundreds of people going to the Jobcentre saying, ‘I’d like to be a guitar builder’,” says Doug. “But if we can find the right people, we will invest the time and energy, and give them the skills they need. We brought a couple of apprentices through, and we sponsored a guy who was going through the University of London’s guitar-building course. We’ve brought in guys in who were hobbyists or enthusiasts and trained them.

“If we want to have a British guitar-building industry, we’ve got to take that responsibility seriously. People like us and Crimson, we need support, we need people to buy into what we’re trying to do here.”

What Doug is trying to do is bring Gordon Smith into the 21st century, and carve out an identity that will allow the brand to flourish beyond the dedicated enthusiasts who’ve kept the company alive until now.

“When we took on the brand, the only people that were buying Gordon Smith were people that already owned Gordon Smiths,” says Doug. “The big challenge for us is attracting the next generation of players. How do we get that 17-year-old kid to aspire to play Gordon Smith instead of one of the big American brands?”

Key to this has been some soul-searching about what Gordon Smith is, and what it needs to become, in order to set itself apart.

“I don’t think it’s unfair to say that towards the end of Gordon Smith’s previous incarnation, it had lost a little of its identity,” says Doug. “So we worked hard to develop guitars such as the GS-1000 and the GS Deluxe, which have definite identities as Gordon Smith guitars. Also important was improving the quality of the guitars. Every single component – from the wood to the pickup screws to the plastics we use – has been upgraded. The prices have gone up but I believe they’re still very affordable for hand-built guitars. It reflects the improvements we’ve made in quality.”

It’s easy to talk a good game about how great your guitars are but it’s another to tell the public that they’re welcome to drop by at any time to take look for themselves. But that’s exactly the approach Doug has adopted (at least, when we’re not in the midst of a global pandemic, of course). He’s ready to show the world just what Gordon Smith’s team of luthiers are up to inside the old Co-operative building on a sleepy road in Higham Ferrers.

“It’s important for the customer to see that we’re offering them a genuinely hand-built instrument, so we welcome people here,” he says. “Our doors are open 8:30 to 5:30, Monday to Friday. Anybody can come in and see what we do and get involved – it’s not unusual for people to come here, have a look around, and end up winding their own pickups.

We want it to be an interactive experience for people. Even if you’re not buying and you just want to browse, or if you’ve got an old Gordon Smith and you want to find out more about it, come and see us. There’s lots of stuff here that makes it an interesting day out.”