We hear from guitarists Kyle Seely and Matt Palmer on the making of the Philly rockers’ sophomore record. 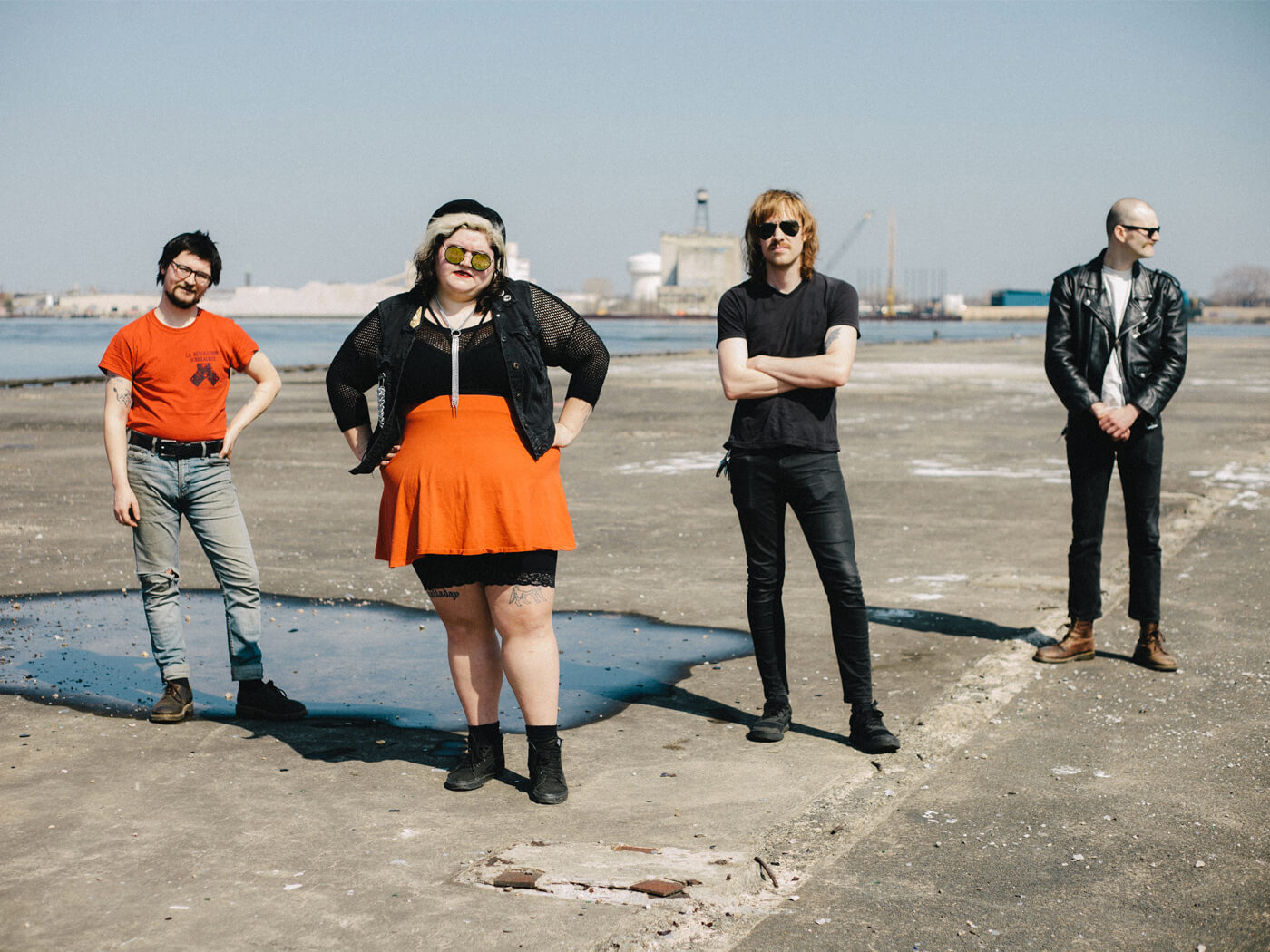 For years, Sheer Mag have made music about pain, struggle and hardship. Yet the Philadelphia group’s songs are anything but bleak. Armed with razor-sharp riffs, Tina Halladay’s powerhouse vocals, and stories with heart and soul, the resolutely DIY punk rockers stand hopeful, their faces always turned towards the light.

With three no-nonsense EPs released between 2014 and 2016, Sheer Mag honed their irresistible blend of classic rock and power pop, touring heavily and leaving a firestorm of hype in their wake. In 2017, they dropped their debut full-length, Need To Feel Your Love, that brought in influences from funk and soul.

Two years on, and Sheer Mag are readying A Distant Call, their sophomore album that’s more focused on story and sound than its predecessor. As rhythm guitarist and principal songwriter Matt Palmer tells Guitar.com, the band zeroed in on a rock sound to craft 10 songs that chart the journey of a character loosely based on Halladay circa a few years ago. At the time, the vocalist had to cope with a death in the family, losing her job and a breakup.

Ahead of A Distant Call’s release next week, we caught up with Palmer and lead guitarist Kyle Seely to talk guitars, what goes into the Sheer Mag sound, tour tips and more.

How did each of you get into playing guitar?

Kyle Seely: I started out by playing bass when I was about 13. Hart [Sheer Mag’s bass player] is my older brother and got into guitar first. I looked up to him tonnes so naturally I was drawn to it – a tale as old as time… But at that age if I wanted to play guitar too, I’d be a copycat, so I had to ‘get my own thing’. I thought about trying to become a DJ and learn[ing] how to scratch like DJ Lethal or the guy from Incubus, but bass was much more feasible at the time. Eventually as we got older we both started switching it up and the roles reversed.

Matt Palmer: I started playing guitar when I was about 16. At the time I was a big fan of the Black Lips and all of their songs are really simple chords, so I started learning those and writing rinky little songs of my own.

Who are some of your most unlikely guitar influences?

Kyle: I’ve been meaning to give a shoutout to Xan McCurdy from the band Cake for a long time. That band got so much air time in my parents’ house growing up long before I got into punk, classic rock, indie, whatever. His guitar style definitely had a huge influence on me – such a distinctive way of gluing the band together, adding lots of really interesting melodies to the songs without getting in the way of things. I think he deserves a good seat in the ‘rock guitar’ canon.

Here are some other influences worth mentioning: Devin Ocampo of Faraquet and Medications, Fredrik Thordendal of Meshuggah, Mike Heron of The Incredible String Band and Oliver Mtukudzi. 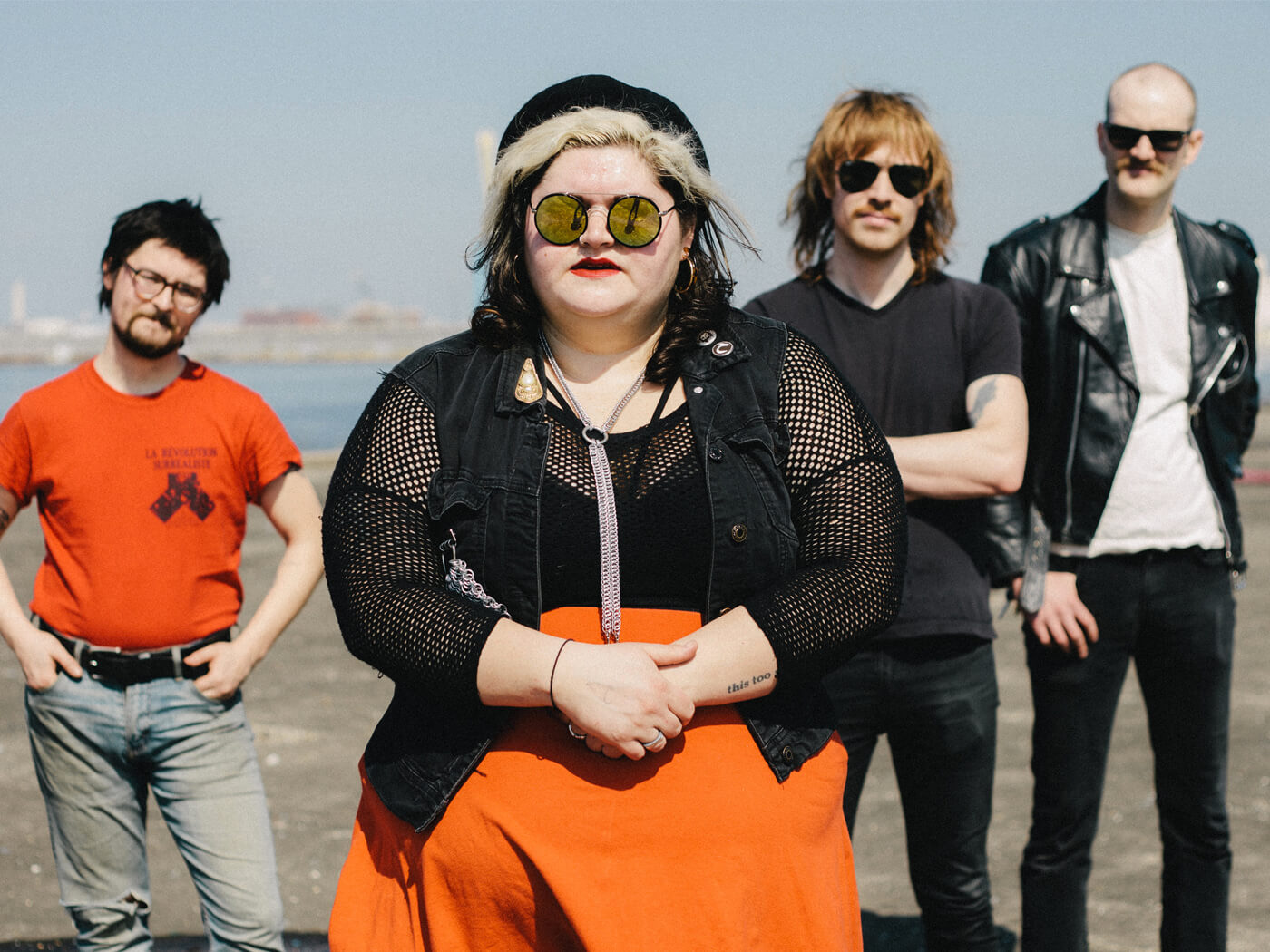 How would you describe the difference between your playing styles?

Kyle: My guitar parts are usually quite a bit more percussive, rhythmic and lead-y. Matt holds it down with clean strumming for the most part.

Matt: Kyle’s a hotshot guitarist and I’m not. I’ve been working on being a more competent guitar player, but most of my focus musically goes towards the songwriting and lyrical side of things. Kyle is the sort of the player who can pick a melody out of the air and replicate it and expand on it immediately. I need to study any part to get it right.

Need To Feel Your Love was Sheer Mag’s first full-length album after a series of EPs, which upped hype and expectations around the band. What was the mood with A Distant Call? Have you gotten more used to a bigger, brighter spotlight?

Kyle: After the last album cycle ended we wanted to hit ’em with another one relatively soon, so this one was written and recorded on a fairly strict timeline, at least by our standards. We had to put our nose to the grindstone right away, which was a great time but also exhausting and inevitably a bit joyless at times – but that’s how it goes.

As far as the ‘spotlight’ thing goes, I think we’re in a good place. Now with a few releases under our belt, it doesn’t feel like we’re proving ourselves anymore and we can just do our thing.

Matt: With A Distant Call, we really wanted to narrow the scope of what we were doing on the record musically. Need To Feel Your Love explored a few genres outside of ‘rock’ music like funk and soul, which we are excited to work with again, but we wanted to make an album with fewer stylistic divergences this time.

A Distant Call is a rock record through and through. There are moments that delve into metal, hard rock and power pop, but there is consistency tying all 10 songs together in a way that there wasn’t on our first album. As for the spotlight – it’s a constant adjustment but we tend to create in a vacuum anyway, so it doesn’t have much impact on us. 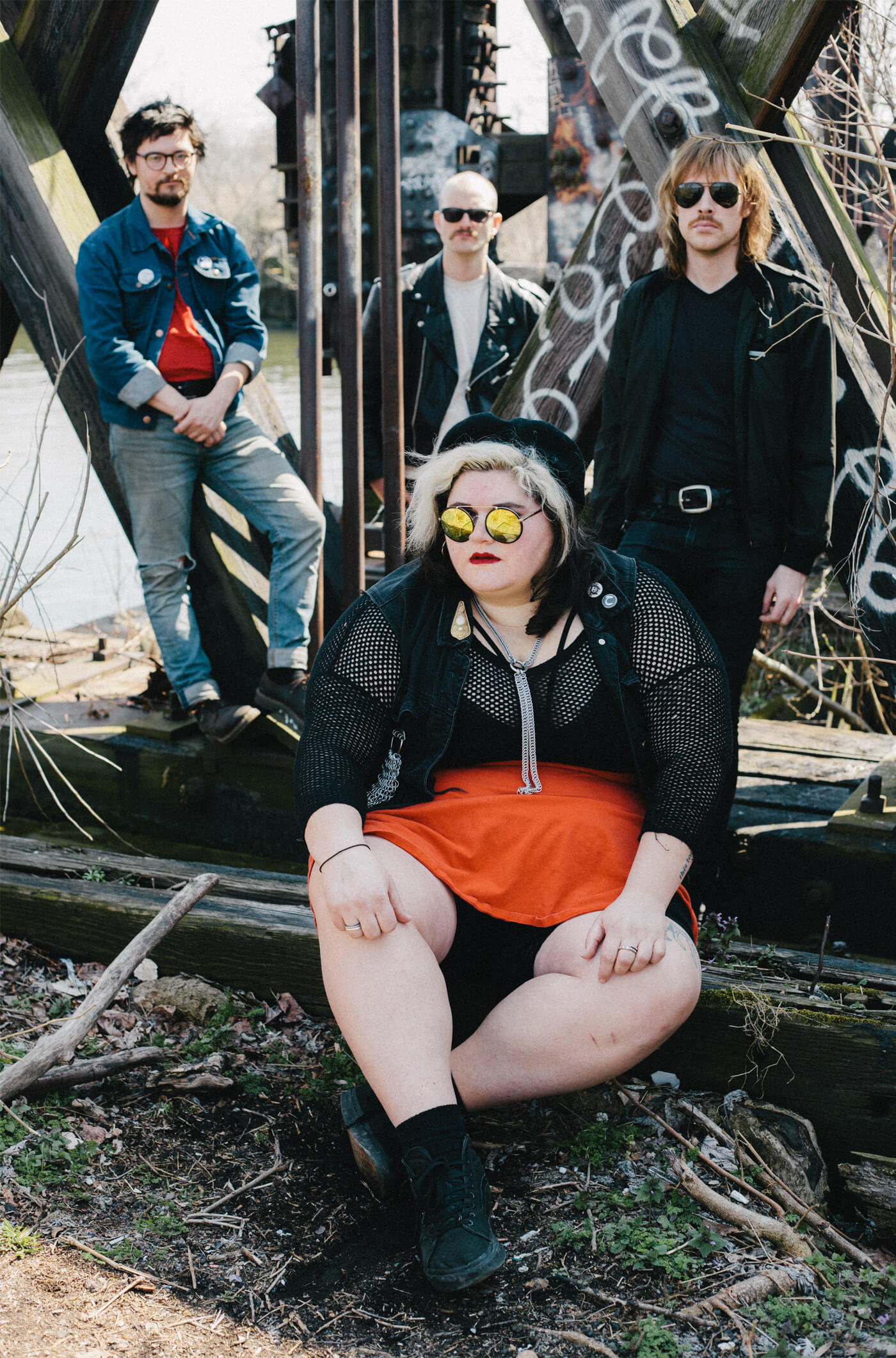 The band’s songwriting process has been compared in the past to an assembly line. Did the process stay the same on A Distant Call?

Kyle: That’s still a pretty accurate analogy, though this album was a bit more collaborative in general, which was cool. Matt brought a few songs to the table, so we worked on music together rather than just supplying them with finished songs and leaving them to it. But yeah, still the same concept, I guess. Music gets written first, then lyrics.

Matt: This time around we thought that it would be useful to have a cohesive concept that ties the record together lyrically, so Tina and I got together and came up with a trajectory for the album. We created the arc of the main character, essentially a slightly fictionalised version of Tina from a few years ago, and then once we got all the instrumentals for the songs we made a tracklist and plotted the story onto the 10 songs that make up the record.

Production-wise, your albums are more polished than your EPs – but not drastically so. How did you approach increasing the production value on both your full-length releases?

Kyle: It pretty much boils down to us getting better at producing our stuff. On the first three EPs, we basically just put mics on things and hit record. I love the way those sound but it’s always a gamble. After a while we couldn’t always guarantee it would sound the way we wanted it to and we would end up having to re-record songs two or three times before getting it right.

Nowadays we’re trying to get it down to a controlled science a bit more. Plus when you have references from your own catalogue of songs, you know what worked and what didn’t, so we’re just building off that.

Matt: Hart has always produced records for bands that he and his friends are in, and now, more than 10 years in, he’s just gotten really good at it. For this record almost all of the instruments were recorded to tape by Hart and Kyle at a makeshift studio in upstate New York, and then we asked our friend Arthur Rizk to help us record vocals and mix everything on the computer. I think the collaboration turned out really great. Arthur is an insanely talented producer who really brought everything together and elevated it in a cohesive way.

What are your rigs like – what guitars and pedals were essential to the sound of A Distant Call?

Kyle: We tracked all the guitars through my Marshall JTM 60 1×12 combo and a 4×12 Fender DeVille, pretty much just my normal live rig. I still don’t use much in the way of pedals in the studio, just a ProCo RAT on some songs and a TC Electronic Mimiq for some doubling.

You’ll probably notice a lot of shimmery chorus and some 80s Judas Priest turbo-style distortion. All of those come from this really cool Ensoniq effects rack we bought. I couldn’t tell ya what the model is, but it’s packed with sweet over-the-top effects which are fun to use.

There’s lap steel on Silver Line. What different types of guitars (or wholly different instruments) did you play around with in the studio?

Kyle: Aside from some keys, that’s about it for this record. We don’t have too many fun instruments at our disposal in there – if we did we’d probably waste too much time. The only reason we have a pedal steel is cause I impulsively bought one online a year and a half ago. There’s a lot of great pedal steel featured in some Steely Dan songs. I guess that’s the idea we were going for.

Sheer Mag don’t come off as the kind of band to spend extravagantly on gear. What instruments/pedals have been with you the longest, and what do you love about them?

Kyle: We’re definitely a pretty bare-bones band although we’ve been investing some more money into gear as of late. I’ve had several different guitars and rigs over the years. For a long time I never really thought I cared all that much, but as we keep going and I’ve been put into situations where I’ve had to use tons of different backlines at fests or had cheap stuff fail me, I’ve started to appreciate the gear that has lasted me.

My Gibson SG has never let me down, same with my Marshall amps. Still working on becoming a pedal buff, though. I have a lot of Boss shit, including a Metal Zone.

Matt: My constant companion is my Peavey T-60, a guitar I got when I was about 18. It has someone’s Social Security Number carved into the back and the gloss on the front was sanded off when I got it, so it just sort of looks like a big piece of driftwood with pickups and strings attached. I can’t imagine ever selling it, and though I’ve played other guitars since I got it, I always end up coming back to it. Live, I play a Fender DeVille and have a pretty simple pedal setup: just a tuner, EQ, compression and overdrive. 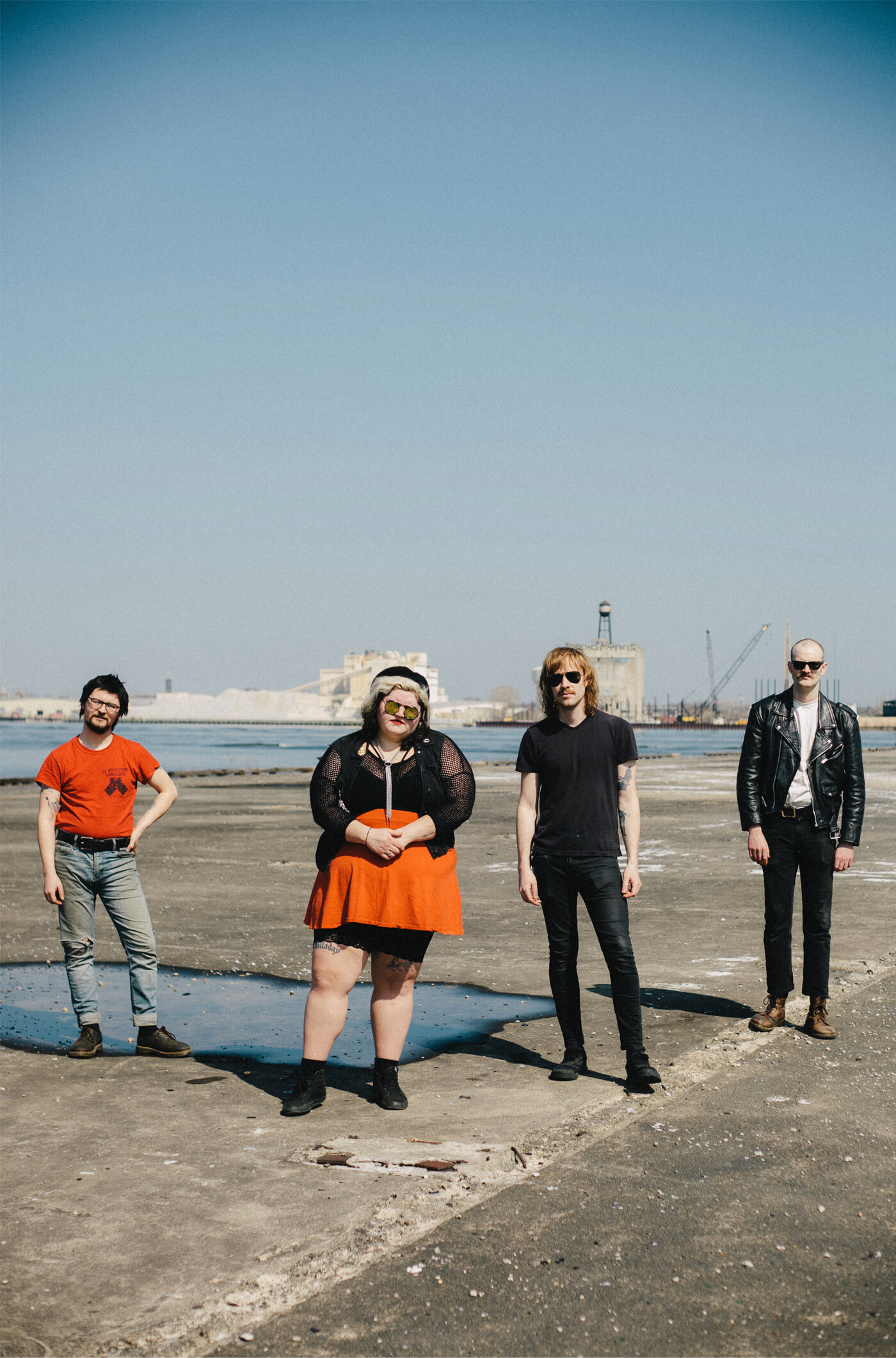 Any touring musician tips on getting your gear to survive long tours and rowdy shows?

Kyle: Oof, not really, haha – shit happens. One thing I know for sure is don’t bother with those curly French fry guitar cables. I tried once when I thought they were cool for some reason, and spent more time untangling the thing than setting my gear up.

And finally, favourite riff on the album and why?

Kyle: My favourite riff on the album is probably Keep On Running – that song got written with the Need To Feel Your Love batch but didn’t make it on the record, then we ended up using it as an intro to our sets. I always loved it so I’m glad we got to use it.

Matt: I really like the riff during the pre-chorus of Unfound Manifest. Tina sings “Sinking in the dark water” over it. That was the first song written for the record and kind of sparked a lot of the ideas I ended up having for the album as a whole. It’s just a really Sheer Mag-y riff to me, very emotional but slightly aggressive at the same time.

A Distant Call is out 23 August. Pre-order the album here.