“If you have something to say, scream it and say it with a guitar”: Rise Against on the power of protest songs

Tim McIlrath and Zach Blair on why there’s no better investment than a Marshall stack, why it’s time to stop mocking millennials, and why being a political punk band is about avoiding obvious targets like Donald Trump.

A lot can happen in 20 years. Bands stumble into the spotlight, pinpointed as rising stars, blow up and lose their spark just as quickly, to be consigned to the realms of nostalgia, or worse, forgotten. Musical movements float in and out of vogue. Genres rise and fall in popularity before being revived or broken apart or mashed together with another genre to create something new. And that’s just music – that’s before we scratch the surface of actual real-world events.

Yet through it all, Rise Against have been there, watching world events play out, pinpointing the injustices, taking notes, and speaking their observations to the world over raw yet polished but nonetheless anthemic punk. Whatever music has been the flavour of the month, whether it is punk or not, people have been listening. A healthy 6.5 million Spotify monthly listeners speaks for that fact, but even then, an algorithm cannot catch every fan who goes out searching for a Rise Against record to hold in their hands as well as blast through their ears.

“We consider ourselves very lucky,” says lead guitarist Zach Blair in regard to this fact. “Bands that have been around for as long as we have might not be experiencing these things at this point in their career.” Indeed, your home city christening a day after you in honour of the release of your most recent album isn’t something that happens to any old band, especially when you hail from a city as large as Chicago. There wouldn’t be such a celebration for any old album either, certainly not for one as vital as this particular record, Nowhere Generation. 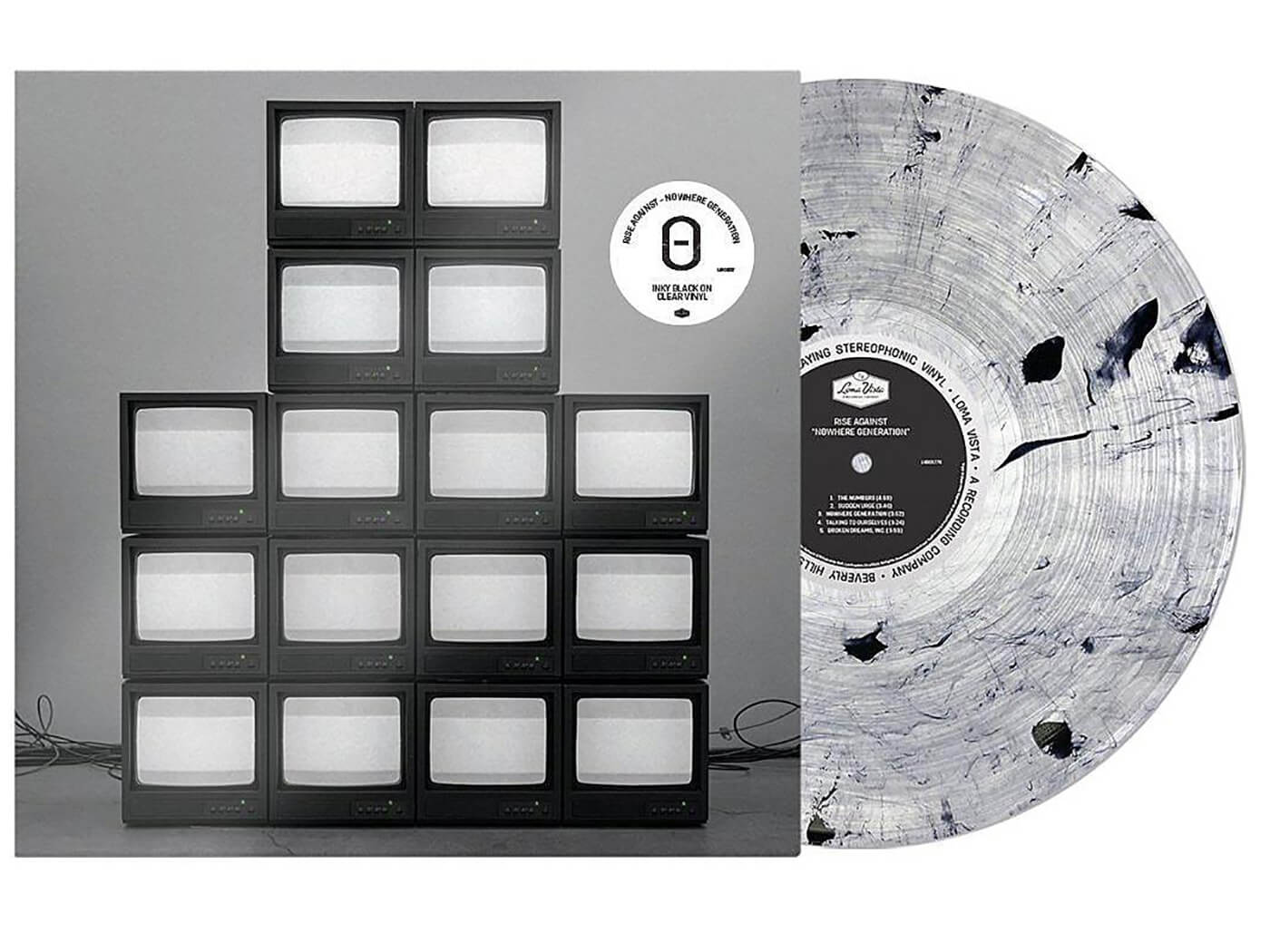 Like many bands who have released records during the hellfire of the last year and a half, Nowhere Generation has been a long time coming, partly due to the pandemic. Its first pieces were assembled around late 2018 going into early 2019 with recording taking place a year or so later. As the band was finishing up, the hotels were threatening to kick them out, with fear mounting over the scale and potential danger of the spread of COVID-19, which the WHO had just declared to be a pandemic.

While this gripped headlines in the short to medium term, the album that would arrive as it (hopefully) dies down tackles a more long standing issue. Inspiration was not a struggle for Rise Against to find. “Being an American political punk band in the year 2020, there was obviously a lot of low hanging fruit to sing about,” explains frontman and lead guitarist Tim McIlrath. “For me as a lyricist, I was trying to figure out where we could add to this conversation. How do you make a record that’s not just timestamped to this year, but discusses the ideologies that were around before everything that happened and the ideologies that will still be around afterwards.”

It would have been easy for Rise Against to, say, write an album attacking the bigotry and barbarity of Donald Trump, yet arguably, that would have also been a mistake. Firstly, that subject matter had already been covered plenty. Secondly, it would have been weighed down by the very timestamp that Tim described, one that only would have aged poorly after Trump’s defeat in November’s presidential election.

“The groundwork that existed to create a candidate like Trump or even to create voters for him was there before he was there,” Tim acknowledges. “And just because he’s out of office doesn’t mean the problems of the world or in our country suddenly disappear.”

The inspiration from Nowhere Generation came from conversations Tim had with fans. A large proportion of them are younger than him, millennials or members of Gen Z, who were feeling disaffected by a society that was setting them up to fail, losing faith in the institutions that are supposed to help them. They are staring down the barrel of a future where they rent for their whole lives instead of buying a home, where they may not be able to afford to start a family, and dread to think of the damage climate change may wreak on their lives. These are grave concerns, and yet they are dismissed.

“To me, this is a bigger issue than whoever is president,” observes Tim. “[Younger people] look at tomorrow with a lot of fear and anxiety. [You have to ask] why people feel disconnected. Why do they feel disenfranchised? And to add insult to injury, we’re making fun of millennials instead of listening to them and realising their experiences are different. These are all realities that we have to face up to, and [we must] start to think about why and what we can do to alleviate some of this pressure.”

Rise Against attack the topic with multifaceted, beautiful nuance across Nowhere Generation. The Numbers is charged with the spirit of collective protest and a refusal to conform, while Sudden Urge encapsulates the anger of those left behind who want to tear the roots of society’s structures up and start again. Meanwhile, lead single Broken Dreams Inc. sees Tim squaring up to authority and challenging their ignorance and inaction. On the flipside, across tracks like Forfeit and the title track add a sense of sobriety to this protest, echoing the weariness of the people in society who are not just fighting, but are simply trying to survive.

It’s a strong, and necessary, statement in isolation, but the spirit of the record is only amplified by Tim and Zach’s guitar work. In fact, it is part and parcel of their protest. “When Tim and I were growing up, guitar was the instrument to get you to open up your ears,” asserts Zach. “The political bands we were listening to played really loud guitars and that’s what kind of drew you in. We were taught by those folks [that] if you have something to say, scream it and say it with a guitar.”

“To me, the greatest instrument is a guitar behind a Marshall stack that shakes a room,” adds Tim. “It’s physical and visceral, and nothing punctuates a message more perfectly than an electric guitar.”

While, going by this statement, there are no prizes for guessing Rise Against’s amp of choice, their go-to guitar brand is a natural bedfellow of the iconic Marshalls. Tim and Zach wil happily admit to being Gibson loyalists, with Tim favouring SGs and Zach favouring a Les Paul, and a particular hot-rodded 70s JMP he owns has appeared on every single Rise Against record to date. Again, there is a constance to this choice as well, and a sense of reverence to the bands from whom the pair learned their political punk craft. “I was so obsessed with the iconic duo of Gibson and Marshall when I was a kid,” professes Zach. “I would hang pictures of Goldtop Les Pauls up and draw them. I was always like, ‘One day, I’m gonna own one of those.”

It’s a custom that isn’t likely to change. “Some people reinvent themselves and they’ll try out a different guitar company with different records and they’re constantly searching. But Tim and I have found what we like and for what we do, I just don’t think you’re going to be able to do it any better [than with Gibsons and Marshalls]. It’s one of these things that isn’t broken, so we don’t ever really try to fix it.”

Naysayers may ask how much political protest bands can really do with loud guitars and strong words. Can they change the hearts of the people bound to a policy in government? No? Why bother? They, however, would be missing the point. Bands like Rise Against work at a granular level, but one that is no less important, by reaching into the hearts and minds of individuals.

Tim hears countless stories from the fans he meets at shows. One fan he met told him that his bands music put him on a path to become a civil rights lawyer. Another said he was inspired to become an engineer working on designing things to use in sustainable energy projects. Several have become teachers in the hope that they can enrich children’s lives. He estimates there must be thousands of others.

“It’s a beautiful, full-circle kind of thing,” he concludes. “Music might seem like this silly endeavour in the grand scheme of things, but data will back up the fact that music has a bigger influence on a young person’s life sometimes more than their parents, their religion, their friends, their teachers or schools. If you are someone who engages in music, it has the potential to change your life. Zach and I are evidence of that. So many of our fans are evidence of that.”

Nowhere Generation is out now on Loma Vista.