Russ Chell is bridging the worlds of rock and rap 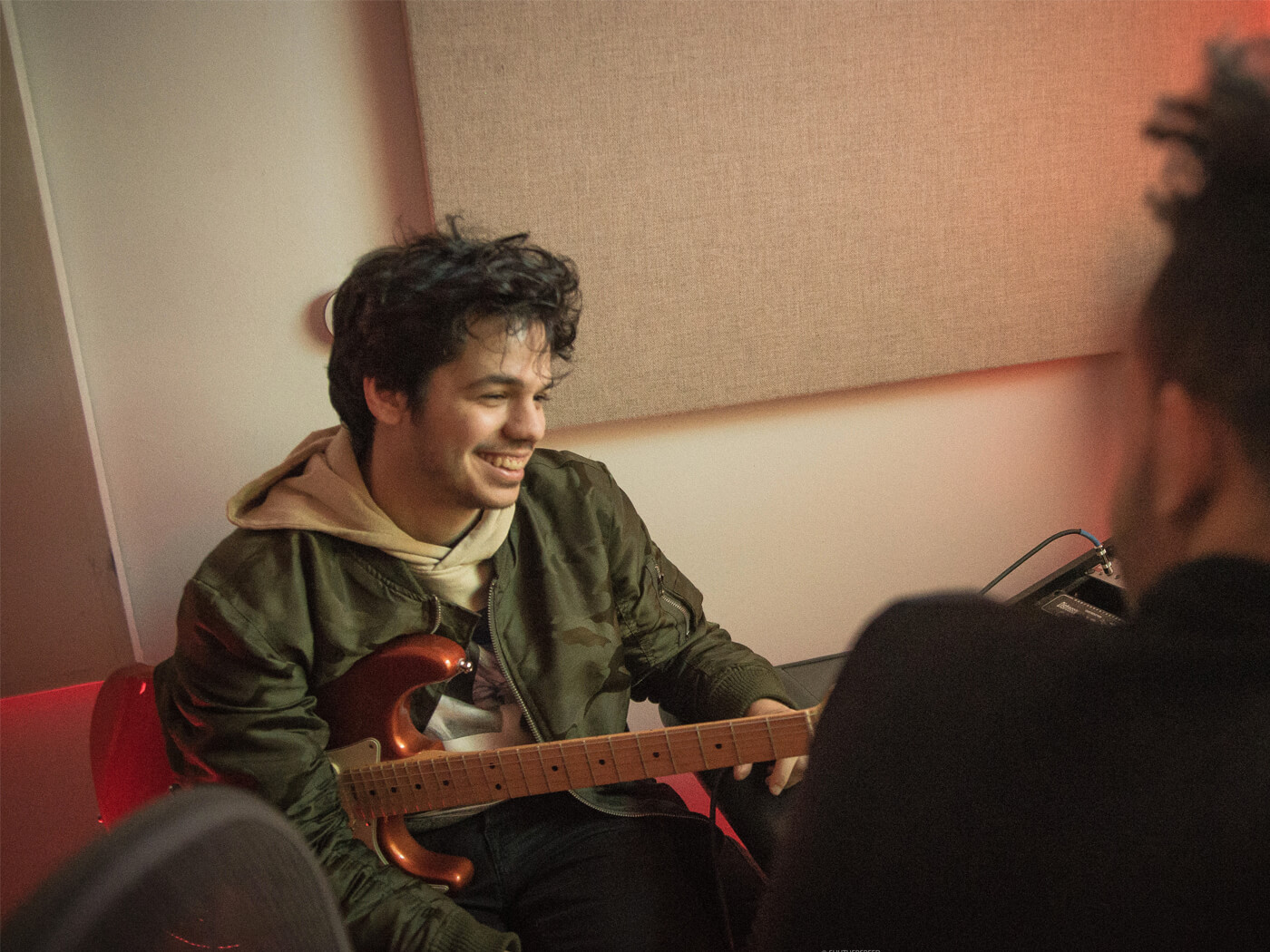 It’s 2019, and genres are more porous than ever before. The line between rap and rock has been blurry ever since the Beastie Boys came straight outta New York City, and even contemporary hip-hop artists such as Post Malone, Lil Uzi Vert and Juice WRLD are wearing their rock influences with pride.

Enter Russ Chell, a rising New York-based guitarist who’s bringing those worlds closer together. He got his start almost a decade ago as a member of buzzy Brooklyn group The Skins, a band that showed an interest in rap when they brought the Virginia rapper D.R.A.M. on board for their 2016 single Bury Me.

The Skins were signed by Rick Rubin – the man who produced Run-D.M.C. and the Beastie Boys – to Republic Records, and Chell started to dabble in production and immerse himself in the world of hip-hop. Fast-forward to 2019, and he’s contributed to the work of hyped-up rappers Juice WRLD, Lil West and YBN Cordae. Chell was also recently credited on the debut EP of Lil Nas X, whose viral country-rap song Old Town Road is 2019’s biggest genre-bending experiment so far. And the Dick Dale-esque guitar lines that open Lil Nas’ Rodeo? That’s all Chell.

We caught up with the guitarist, who told us how he fell into hip-hop production, what guitar sounds young rappers favour, and why he loves virtual amps.

How did you first get into music? Did you have any formal training?

I started getting into music around 12, especially Nirvana. I loved Kurt Cobain’s guitar sound on the Nevermind album and became obsessed at that point. I bought myself a guitar and at first was teaching myself a lot of classic rock and metal like Metallica. As I got more serious, I took up lessons because I wanted to be a more technical guitarist and learn music theory.

Can you tell us a little more about your experience with The Skins?

We started in 2010 or 2011 and I was actually the last member to join the band. My best friend Daisy [Spencer] knew these three siblings – Bayli, Kaya and Reef [McKeithan] – and together they started a rock band. Later deciding they wanted a second guitarist, she reached out to me to audition and the rest is history.

It was a really great learning experience and I definitely built my chops on guitar from playing live shows, which The Skins did a lot of. We played just about every venue in New York City and slowly built up our fan base.

What was it like to get signed by Rick Rubin? Can you shed more light on your music production journey after that?

It was a great learning experience for all of us about the music industry. We were actually discovered by one of his A&Rs [while] playing a showcase at SXSW, then we were flown out to California the next week to perform for Rick before getting officially signed to American Records.

The Skins went into development after that with guidance from Rick and his A&Rs. To help us hone our sound, I taught myself Logic Pro. Later, when we were gearing up for our first major label release, we were paired with an incredibly talented production duo called Take A Daytrip. Working with David [Biral] and Denzel [Baptiste], I learned so much about hip-hop production and pushing the boundaries on music production. Take a Daytrip and I now work together today – so things have come full circle.

What drew you to hip-hop?

I actually fell into it. Rick Rubin guided The Skins into more of a hip-hop/R&B/rock fusion while we were in development. I predominantly work in hip-hop production and love it because you can be more outside the box. There are also so many sub-genres in hip-hop too, which really gives a producer freedom to experiment.

Was there a specific moment you saw this style of hip-hop guitar get popular?

I think it really started to get popular with Post Malone and Juice WRLD. The catalyst was probably Lil Uzi Vert taking inspiration from early-2000s pop-punk.

You incorporate live guitar in your rap productions. What kind of edge do you think that gives your work?

It gives me a different perspective to how I approach production. A lot of people are using the same beats and samples; for me to actually be making my own music helps set me apart. It also helps to make a song sound entirely new and fresh.

Some believe that the guitar is dead. What do you make of that?

Guitar definitely is not dead and this is very evident through the popularity of guitar-driven hip-hop. Guitar will always be a prominent instrument, but it will evolve and grow with music. It’s already showing the directions it’s going with the rise in rappers performing with live bands, rather than a full backing track, which audiences seem to really appreciate. I think it’s going to keep growing and evolving.

What guitars do you use at the moment? Do you have a favourite?

I use a Fender Elite Stratocaster and a Suhr Custom Classic. I love the Suhr. It’s everything I want in a guitar: roasted maple neck, stainless steel frets, and great pickups. I also have a custom Music Man Cutlass RS on the way – so excited to start playing that one!

What kind of effects do you use, and why?

I use a lot of virtual amps like the Universal Audio “Fender 55” and their “Marshall Plexi Emulations”. I also love the Kemper Profiler. All of them are really good for recording something quickly at the highest quality and sound the same every time. If I was to mic up an amp, I might not be able to recreate the same sound. For example, if I needed to change a part of a song or it needed tweaks, I would need to recall the exact sound.

In terms of effects, have you seen any trends in what rap artists prefer?

For rock guitarists, a lot of the time, effects/amps are the key in achieving tone. What is this ‘key’ for hip-hop guitarists?

Through production effects, making it consistent, making sure you’re recording and compressing it properly, and – importantly – getting it mixed well.

You’ve worked with a few big names. Which would you say has been your favourite collaboration so far?

My favourite collaboration has been [with] Lil Nas X. He’s not afraid to experiment. When an artist is down to try new things, that’s always exciting to me. It feels like the possibilities to what we can create are endless.

The riff for Rodeo gives off major surf rock vibes. What was the inspiration for it?

It was actually Spaghetti Western-inspired. I was listening to a lot of Spaghetti Western music at the time we made Rodeo. Instead of going with a super authentic Spaghetti tone, I used more of a surf rock tone – which actually was an accident. It just turned out sounding that way. None of us even noticed the surf rock vibe until we saw fans and the press mention it.

What’s next for you on the music front?

I’ve got some music I’ve produced in the works, which I’m really excited about, that’s coming out over the summer. It’s a good mix of hip-hop and pop.