Ahead of their fourth studio album Bent, the stoner rock band tell us about their meteoric trip to one of the biggest stages in music. 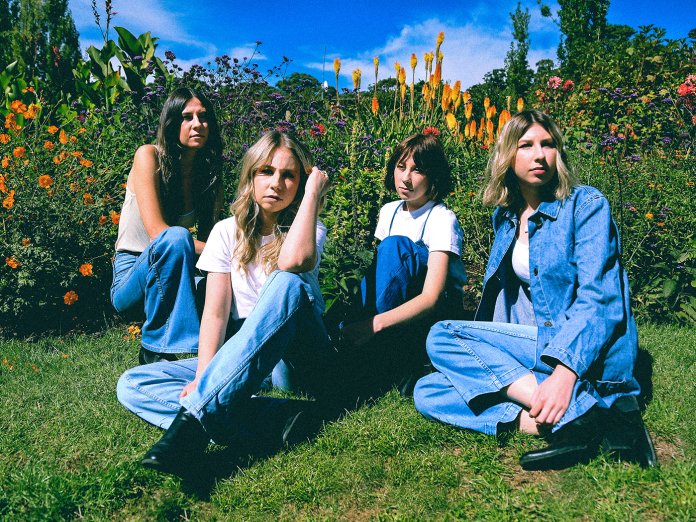 The Findlay sisters Amy, Hannah, Sarah and Holly are the quadruple dose of stoner rock we’ve come to know as Stonefield. Laced with mind-bending, psychedelic riffs, the Aussie band’s tunes will fling you back in time – not surprising, considering they grew up on the likes of Led Zeppelin, Jimi Hendrix and Frank Zappa.

The siblings have come a long way since commandeering their parents’ farm shed in Victoria’s Macedon Ranges for rehearsals. As teenagers, they won a contest held by radio station Triple J for unsigned artists, shining a national spotlight on their music. Then, after a gig in Perth, Stonefield were approached by a scout for Glastonbury Festival, leading to their sensational performance at the 2011 show which culminated in an incendiary cover of Led Zep’s Whole Lotta Love.

Between then and now, the band have released an EP, three studio albums, and are on the cusp of another full-length. Titled Bent, the upcoming project will be released via King Gizzard and the Lizard Wizard’s independent label, Flightless, just like 2018’s Far From Earth. If the new album’s lead single Sleep is any indication, it looks like we’re in for another glorious sludgefest.

Ahead of album’s 14 June release, we caught up with guitarist Hannah Findlay to chat about the band’s gnarly brand of psych-rock, her love for her Gibson ’62 Reissue SG and curious recording processes.

We all have quite similar tastes in music and grew up listening to the music that our parents had brought us up on, which was a lot of Frank Zappa, Zeppelin and Hendrix. During our high school years, we all got into slightly different stuff but we’ve always had a common love of rock music.

You all grew up in a small town. Did that make music an escape for you?

I don’t think it was necessarily an escape but it definitely gave us something to do, which I guess is probably part of the reason we stuck with it. There were fewer distractions and not much else to do.

What’s the songwriting process like for Stonefield? You seem to put out albums at a fast pace – As Above, So Below in 2017 and Far From Earth in 2018.

We have a habit of writing a whole heap of songs and ditching them before getting to a point where we’re happy to put them on an album. We generally jam on a little riff or idea that someone has and the song is created from there. Once we’ve written and ditched a few songs, we all eventually get an idea of the album we want to create and it becomes a lot easier from there.

Bent was recorded by Joey Walker and Stu Mackenzie of King Gizzard and the Lizard Wizard. What was it like for you to work with two guitarists on the album?

Recording with Stu and Joe was a completely different experience to anything we’d done before. They stood back completely and let us make the decisions without influencing us too much. It was refreshing working with people who had faith in what we do and enabled us to achieve exactly what we wanted to without second-guessing ourselves.

We read that the album was recorded in between tours over five days. How did that affect the process and the atmosphere of the sessions?

It helped us to achieve a much more “live-sounding” album that wasn’t over-produced or overly thought about. All the songs still felt fresh and exciting to play which made it a very enjoyable process.

Amy has said that Sleep is about the experience of floating in the “in between”, but many fans see that song title and think of the band, Sleep. Is it an homage, and was it intentional?

It wasn’t intentional at all, however, we are fans of Sleep so we don’t mind the association! It came purely from the storyline of the song.

This is going to be Stonefield’s fourth album. Has what you wanted out of a music career changed since you embarked on this about a decade ago?

I don’t think what we wanted out of a career has changed but I think the way we wanted to achieve it and how we go about it has changed. We have learnt so much and have so much more belief in our knowledge and decisions that we are able to navigate things much better these days.

In terms of guitar tone, did you know what you wanted for this album?

Nope! Generally when recording an album, whoever we’re working with tends to get deep into experimenting with different amps and sounds, but a lot of the time we end up going with something very similar to my live setup. For Bent, I went in knowing what works and how we wanted the album to represent our live sound, so I didn’t spend too much time messing around.

Last April you guys were in Los Angeles for what you called a “residency”. How long were you there for, and what was it like?

We were there for a month. It was quite a different experience being in the one spot for so long as we’re generally in a different city every night, but it was a lot of fun. We had amazing bands play with us each week so it was cool discovering so much new music.

Let’s move on to gear for a bit. Has your setup changed much over the years?

Not drastically. My pedals are the main thing that has changed. I used to use my amp as the main overdrive but I’ve been using a Big Muff for quite a while now. I used one a lot on As Above So Below and went and bought my own straight after recording that album.

What are your main guitars right now, and what do you like about them?

I use a [Gibson] ’62 Reissue SG. Besides loving the shape and colour, it’s a fat-sounding guitar and has been solid and reliable to tour with.

Noise is a big part of your sound, how do you achieve it?

I rely a lot on my Big Muff. I have my amp on clean with the Big Muff on top of that. That [setup] paired with my SG, is my favourite combination.