We speak to the MC5’s Wayne Kramer about Old Glory, Fender and what became of his unique Stars and Stripes Stratocaster. 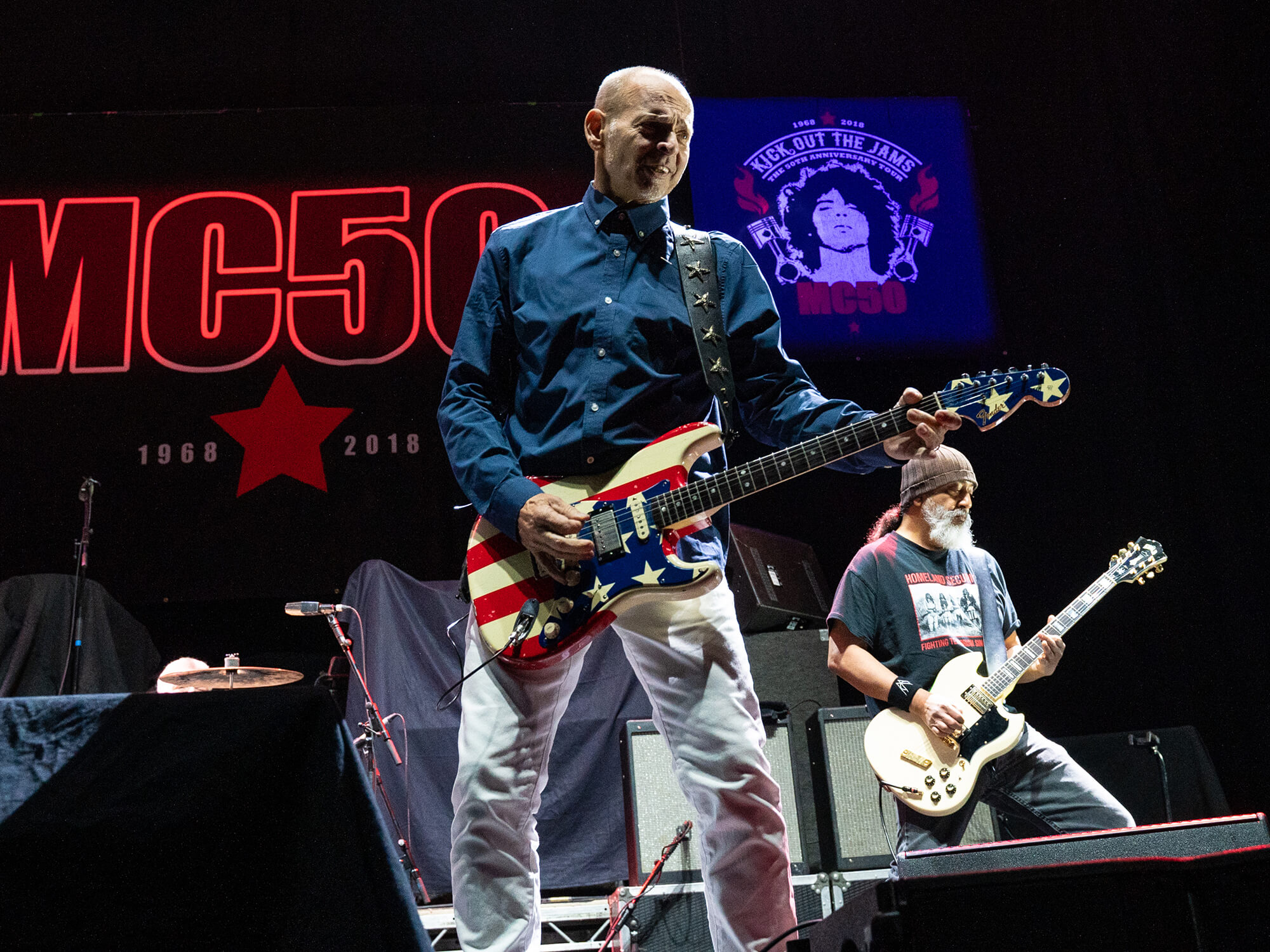 Guitarist Wayne Kramer is best known for being a founding member of Detroit power-quintet the MC5. Despite only putting out their live debut and two studio albums during their incandescent stint in the late 1960s and early 1970s, before their ultimate implosion in ’72, the group’s ferocity has been an inspiration to generations of bands that came after. Today the Motor City Five are nothing short of rock ’n’ roll legends.

The MC5 were a radical left-wing group who draped the Star-Spangled Banner over their amps at live shows – and occasionally destroyed the flags too. The band’s adoption of Old Glory also extended to Wayne Kramer’s Fender Stratocaster, painted with a Stars and Stripes motif.

Kramer’s Strat was used on the band’s debut LP, the live album Kick Out The Jams. The record’s cover, however, shows Kramer playing an SG, which had only been borrowed for the soundcheck. Fender began working with Kramer on what would become his signature Stratocaster in 1995, though it wouldn’t come out until 2011.

The story of Kramer’s original Stars and Stripes Stratocaster has never really been told – until now.

“I’m a huge Pete Townshend fan,” says Kramer. “When [The Who] first emerged, I just loved them. I thought they were fantastic, and I noticed that Townshend had this kind of pop-art sensibility in his clothes. He had a jacket that was made of what looked like a British flag. I thought, ‘That’s a cool idea but I’m not British, I’m an American’. So we had the Stars and Stripes motif, and we would hang them over our amplifiers.

“I decided to have my guitar painted with that motif. The idea was, it’s my flag too. It’s not just the right-wing flag. In my coming-of-age years, that was the Vietnam War period. The Hawks [those who supported the US’s involvement in the Vietnam War] tried to co-opt the symbol of the flag. And I said, ‘Hey, not so fast. This is my flag too, and I disagree with this war.’

“Democracy requires participation. So I’ve just continued with using that symbol to represent the fact that we live in a pluralistic culture with differing views and differing ideas. It’s messy sometimes but it’s the symbol of the American experiment, which I support. I don’t think it’s the greatest system in the world. But it beats the pants off of whatever is second.”

Wayne Kramer has been a long-standing supporter of Fender, including the brand’s amplifiers. The new MC5 record, due for release in October, was recorded almost entirely with the Strat through a Hot Rod DeVille. “I love them because they build a good product,” Kramer says of the brand. “That’s why I stand behind Fender. I stand behind anybody that builds a good product.”

Kramer’s Stars and Stripes guitar started out as a white Stratocaster. He painted red stripes on top before painting the pickguard blue with white stars. He also added a humbucker in the middle position, an interesting choice done to broaden the MC5’s sonic palette and best capture the band’s live intensity.

“I wanted to have just a little bit more output for my solos, so I could get my level up above Fred Smith,” says Kramer. “I thought, ‘You got a two-guitar band and both of you are playing through Marshall 100-watt amps, it’s almost impossible to get one part to jump out’. So I put the humbucker on there so my solos would break through a little bit louder. I also liked that Stratocaster bridge pickup. It’s got that biting, slashing, Stratocaster sound, and the neck pickup has that deep effect to it, with a little edge to help it cut through.

They’re great tones, there really is a lot you can do with them. Now, I’ve got a selector switch so I can combine the bridge pickup with the humbucker or the neck pickup and the humbucker. It’s a five-position switch, and it doesn’t go out of phase. I removed the phase aspect of it.”

With the MC5 such a revered act, you might think that Kramer’s original Stars and Stripes Stratocaster would be worth some serious money today. Unfortunately that’s not the case.
“I was so broke, and I was in the throes of my addiction,” says Kramer. “I had a few other guitars and I thought, ‘Well, I should sell it…’ and nobody wanted to buy it! That was in Detroit in the 1970s. Nobody wanted to buy it. So I took it to my local music store and he said, ‘Oh, Wayne, you’ve ruined the guitar with that Stars and Stripes paint job. If you repaint it, I’ll buy it from you.’ So that’s what I did. I’m not proud of it. But that’s what happened.”

The guitar was later sold and never recovered. “I suspect somewhere in Michigan there’s a Stratocaster in a case under the bed that nobody’s seen in 50 years. And that’ll be it. And it’s purple. It’s Candy Oriental Purple with a humbucker in the middle.”

The MC5’s influence is still felt among rock bands today. For Heavy Lifting, Kramer reunited with one of the original MC5 members, Dennis Thompson, who plays on two songs, as well as a host of collaborators that includes Tom Morello, William DuVall and Don Was.

Meanwhile, Kramer continues to fight against injustice, linking social activism with rock music and uniting people through the power of art and rock ’n’ roll. He also runs the non-profit Jail Guitar Doors, which supplies the incarcerated with much-needed therapeutic musical instruments.