Anderson’s metal guitars were truly unique, but he got side-tracked building Space Shuttles, missiles and drum triggers for Def Leppard, meaning just a few dozen of these fascinating instruments were ever made. 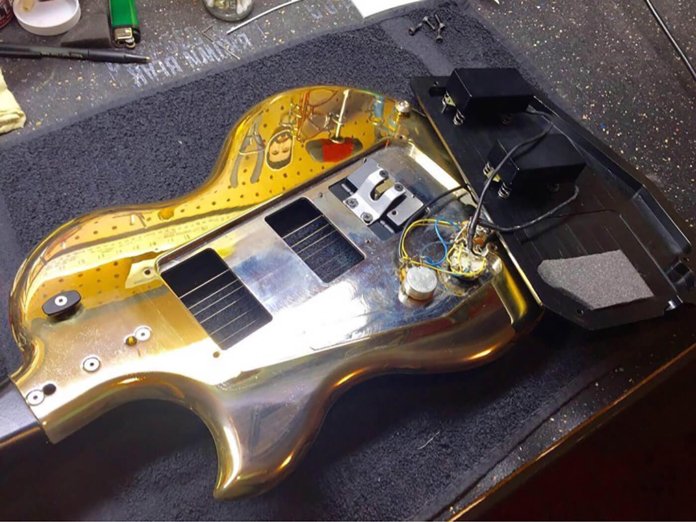 Some of the most innovative ideas in the guitar building industry come from people who are experts in other fields of study – those who haven’t constrained themselves to the conventional guitar production paradigms laid out by previous builders. Arndt Anderson is a machinist and mechanical engineer who started building guitars in Chatsworth, California in 1981, at the time, the builds were done under the banner of Magnesium Guitars. He later moved operations to Spokane, Washington in 1989.

Anderson’s guitars were much different than other orthodox guitars in that they were built [almost] entirely out of metal. The first guitar he made was comprised entirely of aluminum. By that time, Travis Bean had made some aluminum necks and John Veleno [also a machinist by trade] had made some guitars entirely out of aluminum. In fact, Anderson notes that Veleno was an inspiration and he had contacted him at one point early on in his career to get his blessing in making metal guitars. But Anderson noted that aluminum did have some drawbacks. 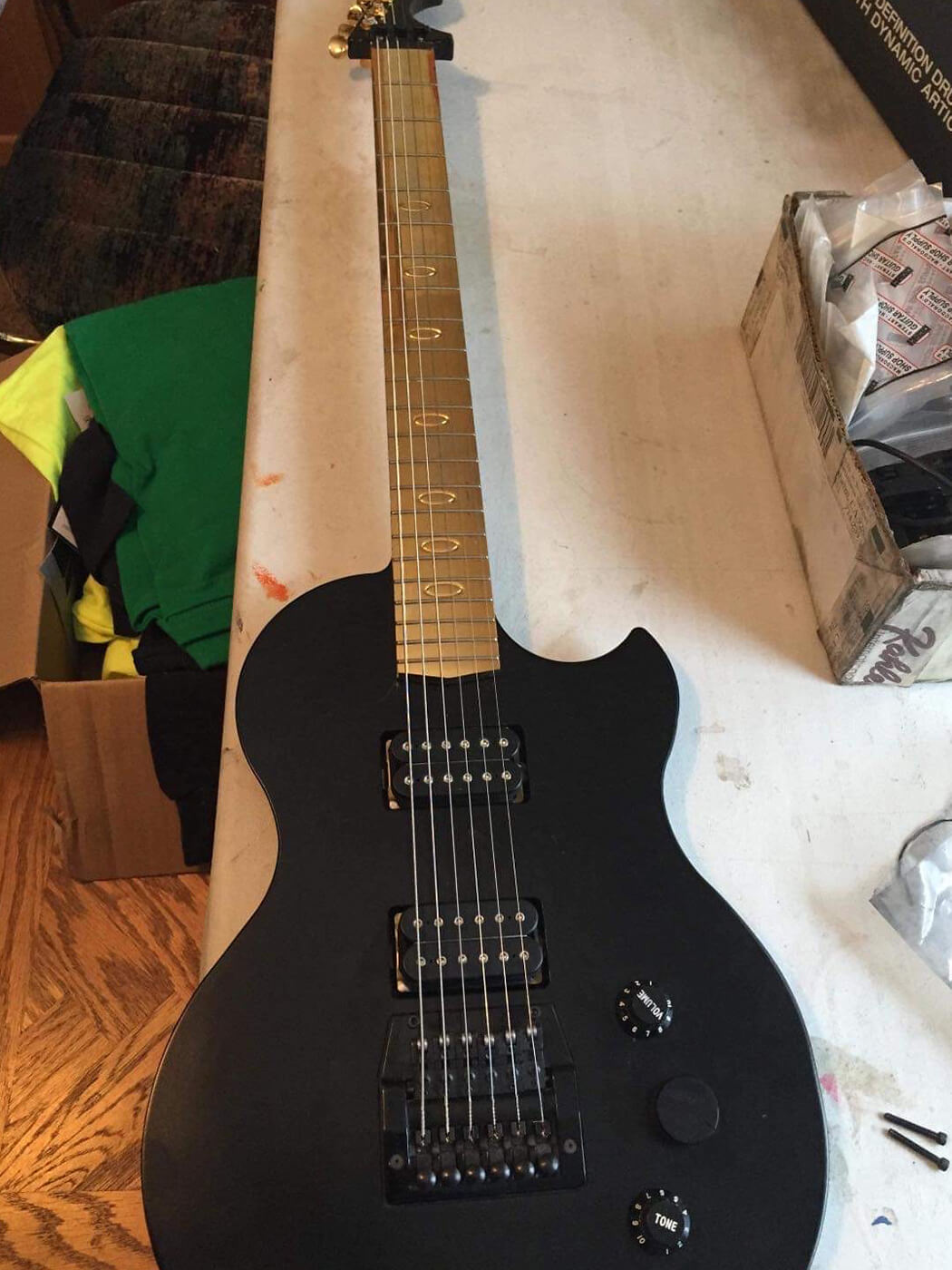 The strength-to-weight ratio of magnesium is superior to aluminum. Magnesium is a third lighter than aluminum, which means your guitar won’t tend to hang low at the headstock [which is often the case on guitars like the SG, which tend to be somewhat neck heavy]. Structurally, magnesium has a better memory than most other metals. In other words, when the metal is stressed or bent, it will return to its original form better than most other metals. Magnesium also is said to have a “warmer” feel to it than aluminum, which can feel a little clammy when it is cold.

Magnesium is an unconventional choice for a guitar neck, but it makes sense when you consider how rigid and strong magnesium is. Originally, Anderson’s guitars also had bodies made out of magnesium too, but later builds switched to aluminium here, as it turned out the weight of the aluminum helped to balance out the guitar almost perfectly. It also enabled Anderson to employ additional finishing options that may have not been available with other metals. 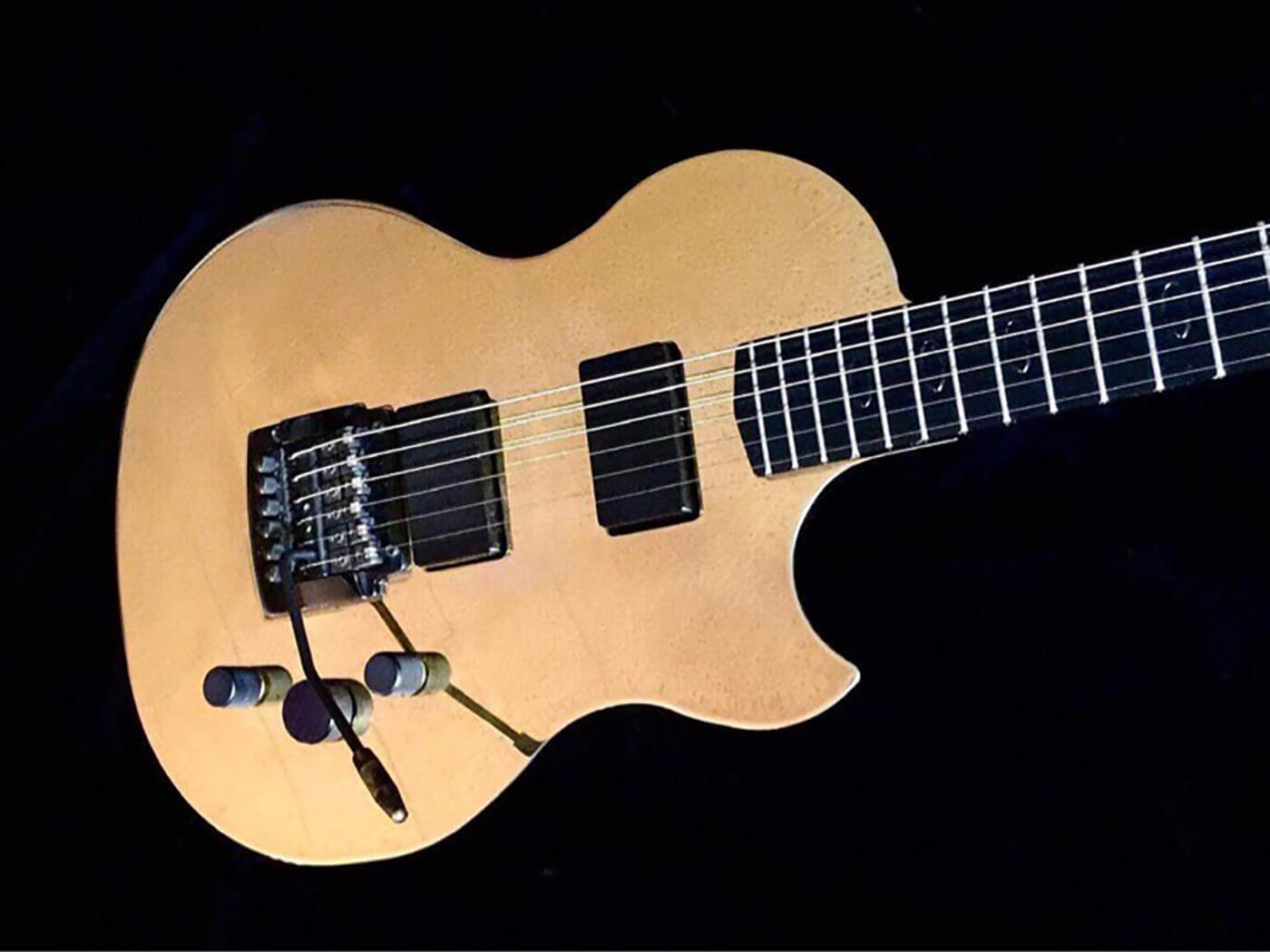 Anderson built the guitars one by one in very small quantities. He brought his guitars to NAMM in 1984 where he met Thomas Nordegg who was working with a band called Missing Persons, which featured several former members of Frank Zappa’s band [Nordegg was Zappa’s longtime tech]. Anderson’s guitars were featured in the Missing Persons music video for the song Give.

Production of guitars stopped toward the late 80s when Anderson started producing a piezo-electric drum trigger pedal known as The Shark. The Shark was used by everyone from Neil Peart to Phil Collins, but perhaps most notably, it was The Shark that allowed Rick Allen to complete his drum tracks on the landmark Def Leppard album, Hysteria. The pedals used by Allen on Hysteria currently reside in the Rock & Roll Hall of Fame Museum.

While Anderson was producing The Shark, he was also doing precision prototype machining for various contractors – he would machine parts that would wind up on NASA space shuttles, as well as projects that would lead to the Stinger Missile and the Patriot Missile for the Department of Defense.

During this era of Anderson’s life, he ceased production of guitars but ended up making another run of them in the year 2000 – a batch of 16 guitars featuring aluminum bodies and magnesium necks. They are carved out of plates of raw aluminum and magnesium using CAD software and CNC machines. 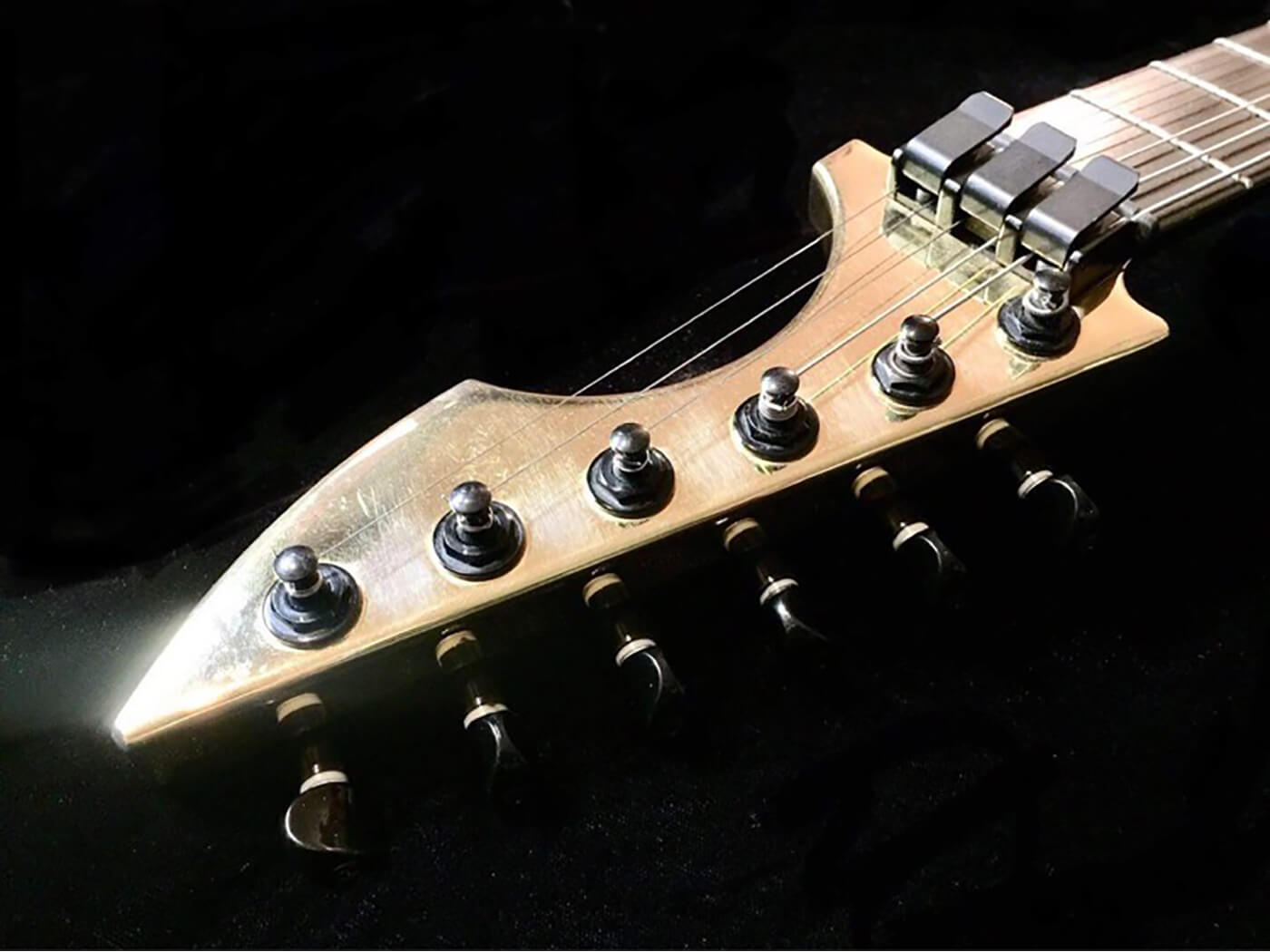 In addition to the precision and stability offered by Anderson’s axes, the magnesium and aluminum construction offered a lot of tonal variances compared to their wooden counterparts. First of all, it is incredibly sleek – the body is 7/8″ thick, and the neck is 3/4″ thick. One might think that an all-metal guitar would be heavier than a wood guitar, especially one that is chambered or employs some sort of weight relief – but Anderson’s guitars feature a solid body construction and weigh less than a typical Stratocaster.

The sustain is impeccable – after all, tuning forks are not made of wood, they are made of metal alloys. The stability is second to none – magnesium is the lightest structural metal on the market and is often used in automotive and airplane framework. The guitars used a Kahler bridge and a locking nut [even on those made with non-trem bridges].

Many options were available for pickups, which were housed in a Delrin enclosure on the back of the guitar. Anderson still holds the patent for the guitar, which alludes to another interesting feature – essentially, the entire guitar functions as a ground, so no shielding is ever required. 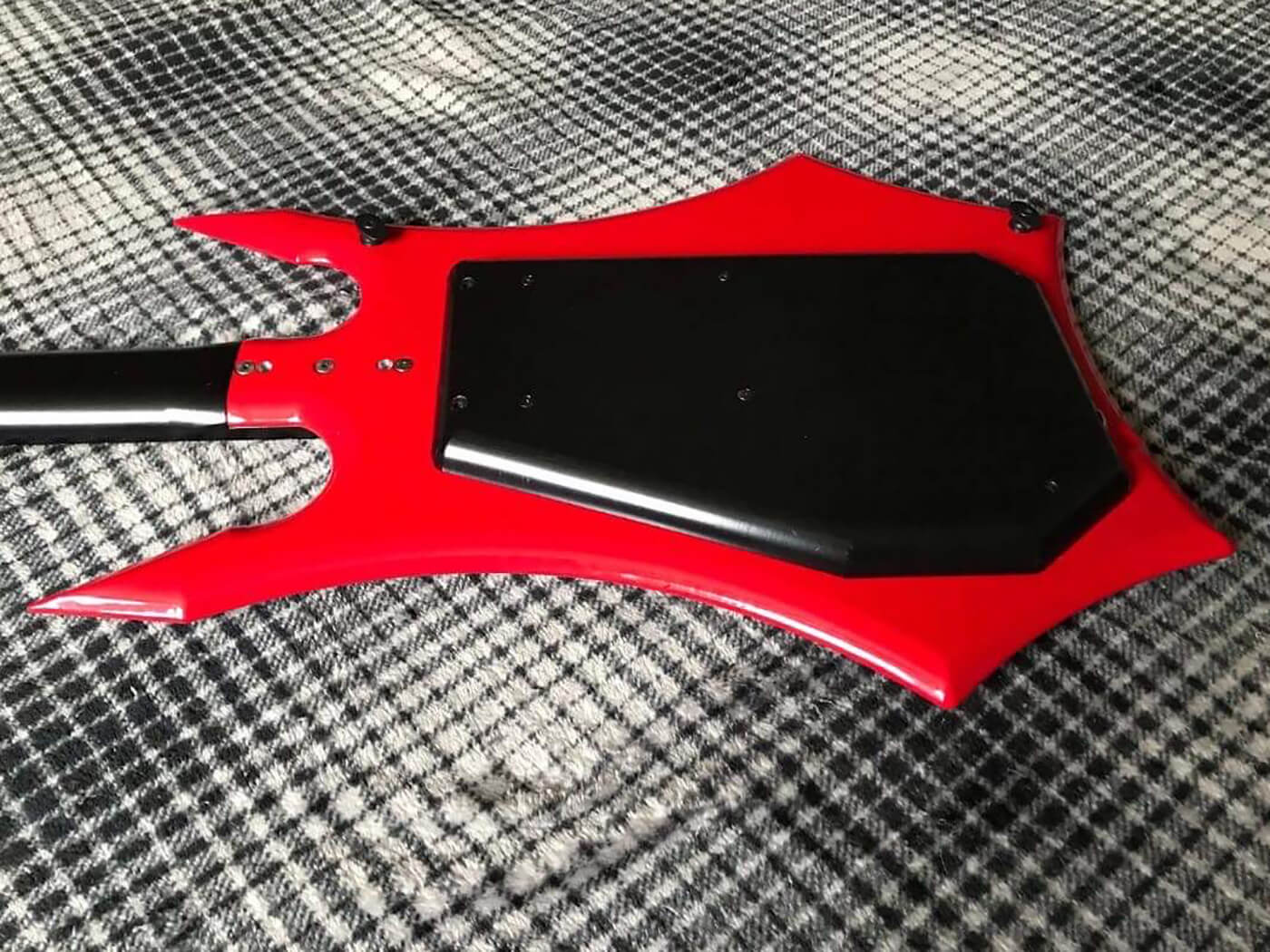 There are “around three dozen” Arndt Anderson guitars out in the world right now. Although they were all custom instruments, their construction was very similar aside from variations in body shape. The guitars continue to occasionally surface on the secondary market but have become a very rare item.

After the batch of guitars in the early 2000s, Arndt ceased production of guitars until a couple years ago when he started building them again, this time, under a new name as there is a company that is using the name Magnum. Today, the guitars are being built under the banner of ASA Metal Guitars [A.S.A. are Anderson’s initials]. Just as in the early 1980s, Anderson builds are done individually in very limited quantities.

We tip our collective caps to Arndt Anderson for his contribution to the music industry and his fearless disregard of convention.