Meet The Winstons and their retro psychedelic world

The Italian band’s latest album, Smith, sounds like it grew out of the blooming garden of 60s British psychedelia. 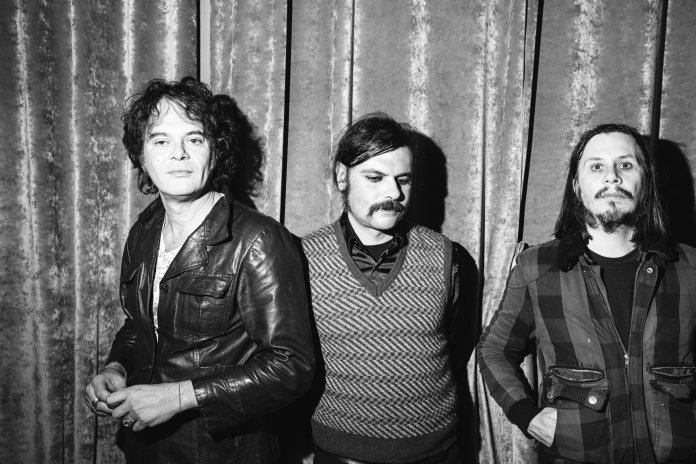 The Winstons’ latest album, Smith, sounds like it could have fallen out of the blooming garden of 60s British psychedelia. Despite the retro aestheticism, however, there’s a distinctly new feeling to the music. The Winstons’ live performances and writing are centred around improvisation, and it’s this – and their refusal to be assigned into a single category – that keeps them exciting. Both the band and the album take their name from 1984’s protagonist, but far from indicating a concept album approach, the Orwellian nomenclature represents a rejection of rigid musical structures.

With its eclectic mix of jazz, psychedelia and Soft Machine-esque proto-prog, Smith isn’t really focused on guitar. Instead, the keyboards drive the riffs. Unlike bands that harken back to the late-60s explosion of hard rock and even early metal, there’s little to no distorted electric guitar on this album. Rather, perhaps refreshingly, the guitar on this album exists more as a textural element, as it did in the Canterbury scene that so inspired the band.

The sense that they exist in a different world entirely to the rest of the music scene is exacerbated by their arrestingly strange music videos, and the fact they all go by Winston Smith-inspired pseudonyms.

Despite their attempts at a more left-field approach to guitar on this album, their equipment of choice stays in line with their vintage influences. Roberto Dell’era – better known by his stage name Rob Winston – has a penchant for old-school guitars, particularly his 12-string Italian-made REX, which he refers to as being made during the golden age of Italian guitar making. His REX is accompanied by a 1968 Gibson EB2 which was bought in New York over a decade ago while on a North American sojourn with the band Afterhours. His amplifiers come in the form of a 1970s Selmer, used for the guitar parts that were recorded at Mike Oldfield’s studio, and an Italian-made FBT amplifier, also made in the 70s.

Speaking to Guitar.com, Lino, Rob, and Enrico (Linnon Winston, Rob Winston and Enro Winston respectively) told us about how they approach creating their strange psychedelic world and why they enjoy playing in The Winstons so much.

What sort of tone did you seek to evoke with Smith?

Rob: “I don’t think we really plan things like that. Even for the first album. We wanted something really acoustic, a bit of a 60s sound – even if it’s not the time anymore to call it a 60s sound. It’s adopting the mixture between tape and digital, so we went in with the songs and they came out like that.”

Each of you take on a lot of different instrumental roles in the band – how did you go about writing tracks with this in mind?

Rob: “We jam out songs, especially at sound checks before gigs. We don’t actually go to rehearsal rooms. We’ve only been [to a practice room] a couple of times in three years. We don’t have time or money to invest in rehearsal, so the process is everybody is writing at home, or improvising things at soundcheck. We start with the instruments, so keyboards and recording drums and bass. Or get an acoustic guitar in there. There’s not a time where we sit down and think about it. It’s very fast.

“That’s why, I think, we’re enjoying this period of the band. We’re all playing in different bands, bigger bands – when there’s a bit of money going around, it turns into a little factory. The Winstons are not at that stage. The magical thing about this band is that it’s all on ourselves. It’s like that garage band you’re in when you’re younger, we do that.”

There’s a lot going on, sonically, on the record – when performing live, how do you approach recreating that?

Enrico: “Normally it’s an improvisation. Sometimes the song is open – the same the song as on the record. The instruments are free. So it’s easy to do almost the same that we have recorded before.”

The title of Smith, and your band name imply some pretty strong themes. Did you approach this record like a concept album, or was the name just a way to tie it all together?

Rob: “It’s not a concept album – the lyrics don’t go around the story or the book 1984 – it’s a play on words. Simple as that. It’s about playing these songs in a completely free way, reminding us and everybody else that we are all Winston Smith in a way. Wherever you live, we’re all part of a system – I don’t know if it’s good for us as human beings. You know, I’m a white Caucasian – I’m poor, but if my situation is precarious, I wonder how everybody else’s situation is. So we’re all a little bit Winston Smith. That’s the box we put the record in.”

As an Italian band playing 60s-styled prog, The Winstons are a bit of an outlier, as Italy’s charts have recently been dominated by trap music. How have you felt the country’s music scene change over the past few years?

Rob: “Well, we’re connected to producers who make trap – being open to what’s going on is a way to stay in touch. Even if it’s difficult for us to understand what the hell is going on in our own country. There’s rock and roll, and there’s trap, R&B, folk. But trap is a bit of a strange occurrence. I think it’s the most punk thing we have at the moment, you know, it’s the most surreal thing, even if the content is nil. That’s what going on for loads of kids in the country, you know, it’s, it’s describing their void, fulfilled by a new way of expression in language. Now it’s free to talk about drugs. It’s not that the times have changed politically or anything, in fact we’re going backwards in this country, it’s just fashion – just allowing things to happen. Like every genre of music, there’s serious music, and there’s some bullshit.”

Enrico: “I think it also is a political act to play real instruments because nobody plays them now. Especially in trap, everybody plays electronic stuff with computers and production. In a strange way, we are out of time – but there’s always a demand for real instruments. Some people can’t play analogue instruments, they just don’t like the sound of them, but some people love them.”

You recently took two of your music videos to the Milano Film Festival – what was that experience like?

Lino: “It was a good experience. It was good to see the films on a big screen, and it was a good atmosphere. There were a lot of famous Italian directors there, and some stayed for a while just to see. We joined together the clips to get a 20-minute short film.”

Rob: “The showing of the video was actually specifically for us within the film festival itself. In a private VIP cinema, upstairs at a historical theatre. We used the format of the clip before for something different, so it was a strange visual experience. We did that video in the hot summer in Italy with a lot of very heavy dresses. And a lot of mosquitoes it was very hard to do that and you can see in the video – it’s not acting, it’s something real.”

Watch The Winstons’ short film, A Visual Poem, which debuted at the Milan Film Festival above with the help of Ipnos Studios. The Winstons are currently touring in support of Smith. Find out more here and follow their Instagram page here.

Enter here to win The Winston’s Smith on 180g vinyl.