Interview with Scottish rockers plus exclusive premiere of new video, Bull By The Horns. 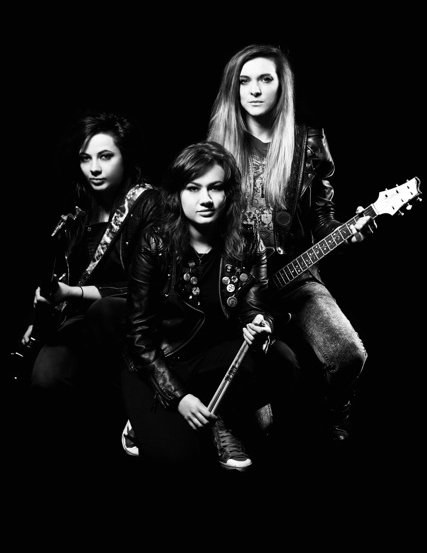 Who are you and what is your role in the band?
“I’m Heather, bassist in The Amorettes. Then theres my sister Hannah on drums and Gill on guitar and lead vocals.”

How did the band get together?
“Hannah and Gill met at music college and decided there was a distinct lack of girls playing rock ‘n’ roll so decided to form a band based around a shared love of AC/DC. After a couple of line up changes, they decided to get me on bass just as I left high school… I wasnt a bassist but I had a bass guitar and they needed someone to fill in for a gig the following weekend. And then five years later here I am!”

Tell us about the equipment that you use…
“I use a variety of different basses, my first bass was an Epiphone Thunderbird in alpine white, I was attracted to this purely because of how awesome it looked. My main bass I use now is the Epiphone Explorer in black, I managed to track one down after much searching; it has that retro look about it that seems to fit well with who we are, and sounds heavy and dirty which makes up for the lack of members in our band.

“I’ve also recently started using Rotosound strings, because I like the fat, chunky sound that you get from them. I use the Orange AD200 bass amp, initially intrigued by the outrageous colour of this amp, it stands out and demands attention. After trying it out once I was hooked on the sound it creates, big, loud and dirty. A bit like us!

“Gill uses a range of Vintage guitars from JHS, Blackstar Series One amps and D’Addario strings. She has such high gain at the front end, the guitars balance that with their chunky midrange, the oversized Blackstar cabs reduce the possibility of high end feedback and the strings stay nice and crisp, ensuring that the signal stays sharp when it’s being driven hard, rather than muddy. It’s a great combination. We both use Line 6 Relay wireless systems, which are great and don’t drop the signal very often, and InTune guitar picks.”

Where did you record the new album?
“We recorded our album Game On, in Dover at Chris Tsangarides’ Ecology Rooms. It was an incredible experience, probably the most relaxing and natural way to record with your band. He wanted to keep the raw, live sound of an Amorettes concert so majority of this was recorded live with all three of us playing together. It was amazing how quickly it all came together and how each song started to come alive at the hands of a rock ‘n’ roll professional. Chris understood exactly what we wanted from this album and delivered it perfectly.”

Who are your biggest influences?
“For me personally as a bassist, I am particularly inspired by eccentric on stage performers. I fell in love with glam rock and ’80s heavy metal whilst a teenager and this has stuck with me throughout my musical career. Performers like Pete Way and Steve Harris are my main bass idols. That intensity and the way they command the stage and really play their instrument is something that I try to do with my own performance.”

What’s been your most Spinal Tap moment to date?
“We are Spinal Tap in female form! Everything from getting lost backstage, being frisked by security, moaning about olives… it’s happened to us. Everything except the undersized stage scenery, we’re not quite at that level yet!”

Where can we hear more from you?
“You can find us on Facebook, YouTube and Twitter for the most up to date information on gigs, videos and music. Keep your eyes and ears peeled and you’ll find us!”