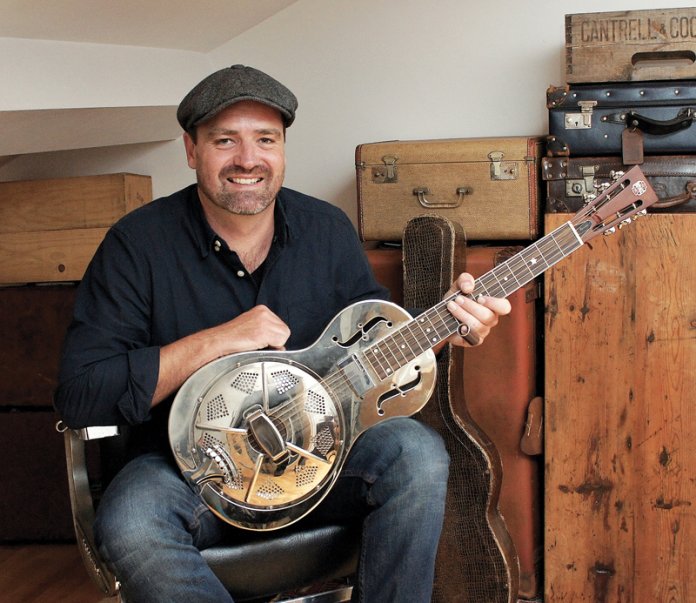 After years of touring the UK and abroad as a solo artist and fronting The Martin Harley Band, Cardiff-born Martin Harley has built himself a reputation as one of the UK’s finest lap steel slide players and singer-songwriters. Harley is a great lover of Weissenborn guitars, and has an enviable collection. He has five albums under his belt, has played all over the world and even has a place in the Guinness World Records. His music is beloved of a diverse range of followers, from blues purists to members of the UK surfing community.

“Ah yes, I Iove surfing and all the vibe that goes with it, but I can’t do it,” he laughs. “I’m the world’s worst, but I am trying to improve in-between playing solo and band work. I enjoy both concepts, the band has the harmonies and I get to play about with my amps and pedals, although a lot of the lap steel technique I have with my thumb gets lost. I do enjoy solo work, where I’m free to hit combinations of licks with space to improvise, and to take the ball and run and feed off the audience.

“I had an interest in early blues music as a youngster, slide followed after being transfixed by Ry Cooder playing the soundtrack from the 1984 film Paris, Texas. I was just a 17-year-old lad who loved the blues, but was sucked into wanting to be in a guitar gang, play the gigs and impress the girls. Guns N’ Roses were a big influence and I was banging out seven bells on a Les Paul Classic 1960 reissue, as a Slash wannabe. I still have that very guitar here. I used a Les Paul all over my Mojo Fix album, released in 2013 and recorded in Texas, even though it was Delta blues-influenced, using Weissenborn acoustic lap steel guitars.”

It wasn’t until on one of Martin’s many ‘adventures of the road’ that he finally put a slide on his finger, however, as he recalls: “My road trips are becoming a talking point. I decided to travel around the dusty back roads of Australia in the mid-90s, living out of a beaten-up old station wagon with a couple of guitars. The heat in the vehicle was so intense, they both had warped necks in no time. So I reverted to open tuning and used them to develop my own style. When I wasn’t surfing, I was playing out the back of the car in some completely uninhabited places.

“By the late 90s, I was well into original resonators and acoustics, and heard one of the best places to find them was in the Mission District of San Francisco. So off I went again, but upgraded to a hired Pontiac Firebird Convertible, driving east from LA into the desert and back up to San Francisco. Sure enough, I found this 60s Gibson LG-3, which is a great fingerpicker and one that I leave in the kitchen when I’m waiting for the shepherd’s pie to cook, and this L-1 archtop built in the Kalamazoo factory between 1915 and 1920.

“I was heading back through Death Valley, California, the hottest area of North America, without the slightest thought of the L-1 cooking in the boot. The glue around the body had started to melt; luckily, the repair job back home proved to be worth every penny.”

“The little Framus archtop is from the late 50s. I believe it’s a 5/51 Studio. It was gathering dust in the corner of a guitar builder’s workshop. I’ve not recorded with it yet, there’s quite a brashy sound here, so I’m waiting for the right song, really.

“I have several big-bodied acoustics here, which include a couple of Guild J30s from around ’84. The black one appeared when my father arrived home from a trip to the USA. He bought it with the idea of me teaching him to play. Well, I failed, and eventually through gritted teeth he sold it to me. It became my first choice for live work for years, until it was smashed by Virgin Atlantic. I performed at the airline’s own festival in Barbados, then it got smashed on the way home. I had it repaired, but it’s never been quite the same.”

“I bought this OOO-size Blueridge as a back-up to the black Guild. I wanted a good fingerstyle model that wouldn’t break the bank, would play and sound great, and also handle extreme temperatures, as I had something special in mind for this one… a climbing trip.”

“I took part in what has been recognised by Guinness World Records as the world’s highest gig. It’s not good on the fingers playing 21,000 feet up mount Kala Patthar in the Himalayas, but it was worth it as it helped raise money for a kids’ home in Nepal.”

While many world-famous explorers and adventures work together as a team, it would seem that when working alone on such missions, Martin has the ability to pen some deep and meaningful songs, as he explains.

“I must admit, I’ve undertaken a few challenges and returned with a book full of songs,” he says. “For example, in 2010 I embarked on a solo 27-date tour over 31 days, from Gateshead in the Far North East of England to St Austell in the far South West, with all my gear, including my Blueridge BR-41 Baby and all my daily essential needs… loaded on a bicycle.”

“It was a feat to say the least, pedalling over 1,200 miles and gigging nearly every night, but I’m OK if I get beer in the evening and tea during the day – tea is the elixir of life for me. The guitar gained a war wound, as you can see. It’s all documented on my website.”

Over the years, Weissenborn lap steel guitars have played a major role in the Martin Harley sound, as he acknowledges: “Oh without doubt, you can hear them all over my new album, out late summer 2015, called Live At Southern Ground, recorded in Nashville, Tennessee, featuring Daniel Kimbro on upright bass. I used this Kona Style 1 Weissenborn, which dates from the 1920s, which I bought after some heated haggling from Norman’s Rare Guitars in LA.”

“My highly prized and probably most played instrument of all time, that’s appeared on all my albums, and certainly my main squeeze for solo slide guitar live, is this model built in the Weissenborn style by the German luthier Andreas Cuntz, using the finest koa, and it’s a killer. I don’t really have a favourite pickup, but this guitar, fitted with an LR Baggs M1 Active, is the perfect combination, it’s incredible.

“Here’s another one built in the Weissenborn style by Cornish luthier Kif Wood, who can make guitars out of driftwood if need be; he built this one from an old rosewood table. He’s also worked out a very innovative way of producing a contact pickup, which sounds extremely good. I was having difficulty in a full-band situation with the Weissenborn models, especially with monitoring, so I asked Andreas Cuntz to build me this solidbodied hybrid-version, again in lap steel format.”

“It’s loaded with a pair of humbuckers with wider-spaced magnets to line up with the strings, a five-way switch and phase control. It still retains some acoustic properties, as it’s chambered, and this time an added acoustic Piezo under the bridge blends really well. The output is massive, and sounds amazing through my Peavey Classic 30 combos, which I’ve used for the last 12 years.”

Stacks of well-worn vintage suitcases are a fitting backdrop for many of Martin’s guitars.

“Yeah, I just love the old concept here, and this mid-30s, solid mahogany Radiotone lap steel is ideally placed. It was actually made by the Oahu company, so maybe it was sold under licence. I’m not sure, but I love it and use it a lot live. The pickup is wrapped up in material, which moves about in the body. I’ve no idea what make it is, but it’s very loud. I’m reluctant to improve anything – I’m thinking ‘if it ain’t broke, leave it alone’. I like the fact that the volume control goes past 10 – way up to 150. 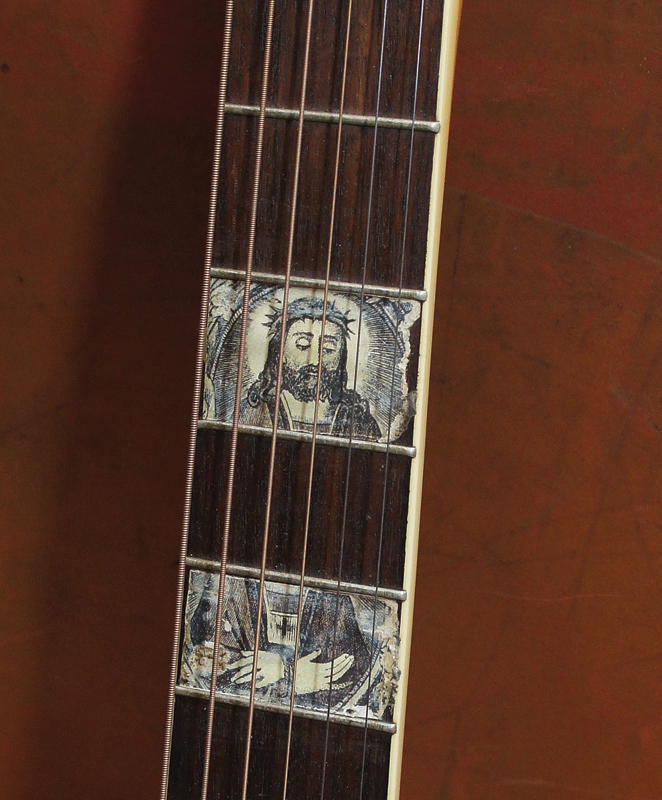 “There’s probably a special rung in hell reserved for people who cut up images of Jesus to make fretboard markers, but this Alvarez Artist acoustic didn’t have any. I got fed up struggling to see where I was playing in lap steel position at a soundcheck, and a couple of postcards of him were all I had. This guitar was originally a 12-string, and one of the guitars that warped on my trek around Australia. By now, it’s apparent to you that I travel a lot under various means of transport, so a guitar that’s relatively unaffected by temperature, is lightweight and indestructible, is essential.

“So far, my parlour-size resonator, built by Republic in Austin, Texas, USA, and fitted with a Lace pickup, has proved invaluable. I love this guitar, it’s certainly expanded my bottle neck playing, using open G and D tuning. 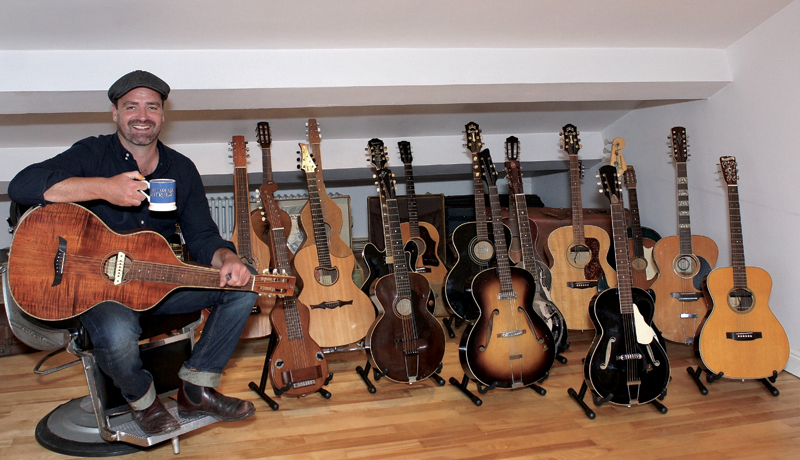 “I have a family of car boot fanatics, who just keep arriving with guitars! Here’s a £10 Hofner 522 they found, which sounds very authentic with a slide. I personally feel that within the style of slide, it’s not that necessary to own very expensive guitars. I think the argument with a lot of these older, cheaper guitars, like the Hofner 522, is that we are familiar with that sound because a lot of the early blues players were playing budget student guitars. For me, every guitar has a song in it, regardless of the price.”