Ride’s latest album Weather Diaries – their first for 21 years – is a welcome evolution of the band’s storm of melody, noise and songwriting savvy. Richard Purden speaks to guitarist Andy Bell about gigging, gear and his career… 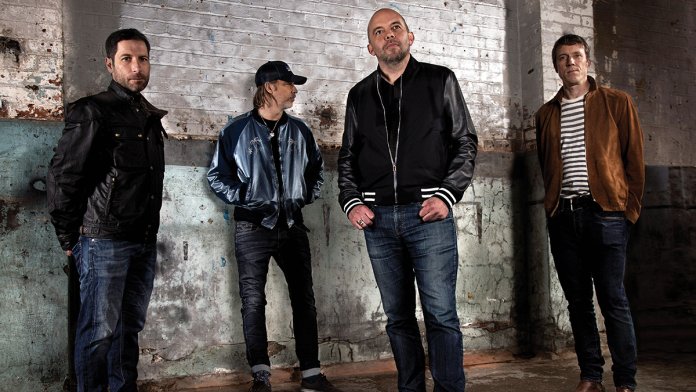 Creation Records boss Alan McGee once suggested that “it took Primal Scream six years to become a genius band. Ride have managed it in six months”: and when the band fast-tracked themselves into the indie-guitar-band movement at the end of the 80s spearheaded by The Stone Roses, My Bloody Valentine, Primal Scream, Sonic Youth, The Smiths and others, Ride’s Andy Bell was a new kind of guitar hero in an already vibrant and varied scene.

His success continued at the tail-end of the Brit-pop era with Hurricane #1, and he gave Oasis a vital shot in the arm by taking on the role of bassist and occasional songwriter for a decade, before a two-album stint with Beady Eye. Most recently, the rumblings that he was returning to “his first love” came to fruition when Ride announced a series live dates at the end of 2014.

At the time of the band’s original breakthrough, 19-year-old Andy Bell was a rising star in the indie ‘shoegaze’ fraternity, releasing euphoric waves of effects-laden noise. When discussing his pre-Ride influences, the guitarist says music had become all-consuming by his early teens.

“When The Smiths came out, I was still a bit young, I was 13 and obsessed with Johnny Marr and a bit of a copyist. By the time The Stone Roses came along, I was old enough to play gigs; they were my Beatles. With Ride, myself and Lawrence [Colbert, Ride’s drummer], were obsessed by John Squire and Reni, which added so much to our musical style, there was that and a bit of Kevin Shields thrown in. I was like a mini Squire for a while; it was the same with Lawrence, Reni just took over. Eventually, I chilled on that and found my own way.”

Bell and vocalist/guitarist Mark Gardener were boyhood friends who formed Ride in their hometown of Oxford with Colbert and bassist Steve Queralt. A love of abstract visuals and art informed their sound, as well as how they set out their stall after signing to Creation. An arresting image of an uncrested wave by surf and skateboard photographer Warren Bolster on their acclaimed debut long-player Nowhere was a sublime accompaniment to the music.

“Myself and Mark were schoolmates, and on one of the reading lists was Ways Of Seeing by John Berger, which we really liked. That one really connected with me, it was about simple but profound ideas that make you think about visuals and how you see them. We began making our own posters and record sleeves at art school. The bands we liked were into the same mentality; we wanted to make a visual as well as a musical statement – we were very in control of the artwork.”

The experimental soundscapes they created in the studio proved to be a challenge live. But since reforming, Bell suggests he has – for the first time – been able to bring that to the new shows. “I’ve got so much more at my disposal now. Even when I was playing bass, I never stopped being a guitarist and kept up with guitars and pedals, which have changed a lot since the first time round – it’s a different stratosphere now. When Ride started, I had a few pedals – fuzz, wah-wah, distortion and the Roland GP-16, which had about eight effects. Alan Moulder, who produced and mixed a lot of our early work, would put the guitars through an Ultra-Harmonizer unit on stuff like Leave Them All Behind; there’s now a guitar pedal that can do that, so I can take that sound into the live environment.”

As well as keeping the original four piece intact, the band also reunited with Moulder, who mixed 2017’s Weather Diaries and the recent Tomorrow’s Shore EP. “Catch You Dreaming from the EP was originally part of Weather Diaries. We were able to go out to the far corners of the sound, it’s more into the electronic side,” says Bell of the recent work. “Pulsar is in the zone of early Ride, but there are touches of synth which add some fairy dust.”

While the band were lumped in with the shoegaze scene, their infectious West Coast-influenced melodies and Bell’s ability to write hooky anthems helped set them apart. “The idea with Like A Daydream was to write an early Beatles kind of song, but make it sound like My Bloody Valentine. When you write a bunch of songs, the ones that stand the test of time often don’t stand out to you when you write them. Vapour Trail was one of the easiest and quickest to write. I threw it out in an afternoon – sometimes you don’t feel like you have worked hard enough to make a classic. There was a guy living in my house who wrote this message to his girlfriend about being a vapour trail – I said: ‘Mind if I nick that?’. With something like that, it’s quick and more from the heart, maybe?

“It was the same with Step Into My World [Hurricane #1]. We had recorded about four tracks and Alan McGee kept saying: ‘Play that again, turn it up!’ and that became the one.” Like early Oasis, it seemed to have a very Celtic feel. “Our singer Alex [Lowe] thought that one was a bit like Runrig. I always thought Big Country were a cool band… with a twin-guitar line there’s only two ways you can go: Big Country or Thin Lizzy.” 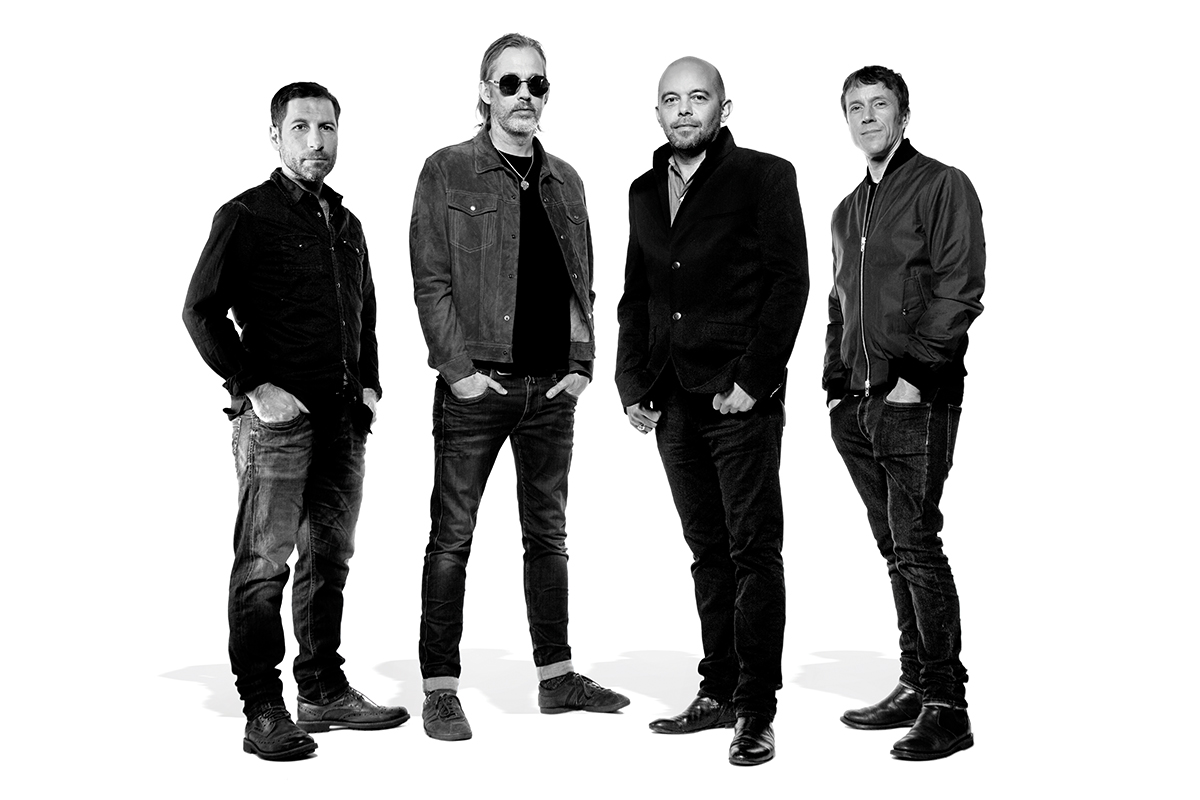 Ride’s reunion shows in the summer of 2015 proved to be a cathartic experience as much for the band as the fans. The Glasgow Barrowlands gig was a particularly emotional evening. “It was simply amazing.

I always loved Barrowlands; it’s one of the best venues in the world to play in, and one of the best crowds as well. It’s always good to be there connecting that music with people again – we weren’t sure if it was going to go off in the same way, you’ve got to take into account everyone is getting a bit older, even the fans. We had a healthy amount of older and younger fans going for it, it’s been wicked.”

Ride’s more recent visit to the city as special guests of Mogwai found them filling the 13,000 capacity Hydro with their familiar wall of sound and psychedelic noise. “That was mindblowing, I’ve seen Mogwai before while we were doing reunion dates. We did some festivals and I saw them in some faraway hot country, which was weird, because you want to be seeing them in the cold. So to play with them in Glasgow with a home crowd and this incredible sound system was amazing. They are such a great band and just the bass sound alone was enough to send you into a coma of pleasure. It was great to be invited by them, because there’s definitely a thread of music and influence that’s gone through and I missed them when they came out in the 90s, around the time we were finishing.”

It was in the last breath of that decade that Bell joined Oasis on bass and remained with the band for a 10-year stint until their eventual split in August 2009. Notably, he contributed album and set-opener Turn Up The Sun from the band’s Don’t Believe The Truth album in 2005. Their final LP, Dig Out Your Soul, a decade ago, was a dark slice of psychedelic rock ’n’ roll which also featured Bell’s Nature Of Reality.

“It’s a song I like a lot,” he says. “It was conceived almost as a White Stripes thing, with the guitar riff, drums and vocals. The guitar riff contains the bassline, in a way – it was meant to be very simple, elemental and loud like that. I don’t know whether we captured it that way and it maybe became more full sounding on the recording, the song itself was kind of was me stating my atheist case. I really liked that album. It was done at Abbey Road – the coolest memory was a Monday morning. Over the weekend, Noel had written three tunes and all of them ended up being on the record. He had Falling Down and two others. We sat there while having cups of tea as Noel banged out drums, bass, guitars and vocals on three tracks.

“The whole thing took him a couple of hours, and he put down working versions of three tunes that ended up being on the album, it was one of those special moments you look back on. That remix of Falling Down [by Amorphous Androgynous] is brilliant – it’s about 20 minutes long, with lots of meandering sections, it’s a great listen and I still play it.” For now, a reinvigorated Ride continue to be a going concern. “We’re taking it as it comes, we just had a cool trip to Japan and it was my first time in China. We’re still touring Weather Diaries at mainly festivals now and beyond that, we’ll see how we feel. I love being in the band, it’s a really cool time in my life.”

“I have three more records in the can” NOFX’s Fat Mike on why the band’s final tour is far from the end for the...