Using the finest Californian tonewoods, Ronin Guitars has built up quite a list of celebrity fans. Dave Hunter plugs in the Stormcrow.

Yeah, it’s tough being the guys at Ronin Guitars. You need a sweet piece of thousand-year-old tonewood for a new project? Just hike out on the Reed family land in northern California and take your pick of felled old-growth redwoods. Not to belittle the skill that luthiers Izzy Lugo and John and Jack Reed put into the process, but hey, it’s a pretty cool way to get the ball rolling. 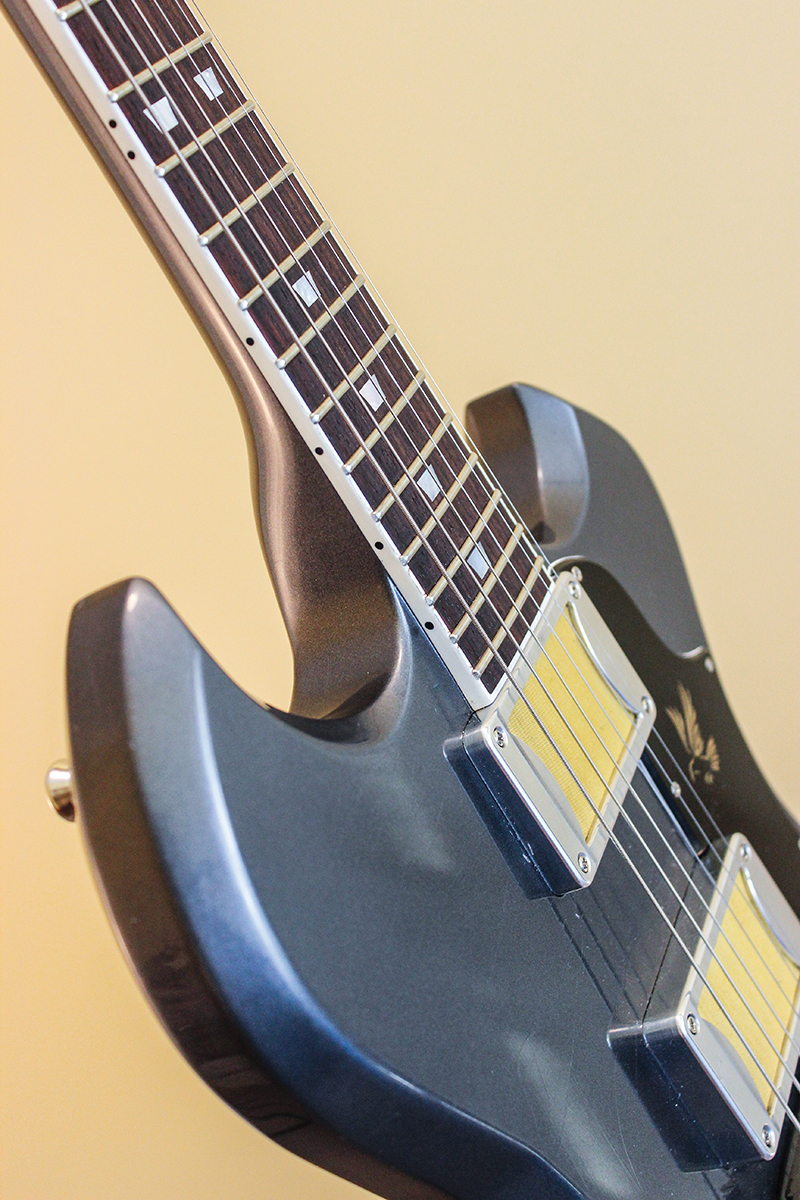 For several years now, the guys at Ronin have been building a stellar reputation on the back of interesting and original designs such as this Stormcrow, their newest model. A few of their guitars have more directly traceable inspirations, but the majority boast a large portion of originality, in looks, woods used, pickups and appointments – all of it.

This is the third Ronin guitar I’ve had the pleasure of playing; each has made a unique statement, and has done so boldly. Clearly, I’m not the only one impressed by Ronin’s work, either: Phil Lesh, David Torn, Keith Urban, Oz Noy and Jimmy Vivino have taken up the cause, and these guitars from the redwood rainforests of Humboldt country seem to be establishing themselves as a primary place to turn for those seeking inspiringly outré tones.

That being said, each of the Ronins I have tried can also rock along old-school, no problem, and this Stormcrow is no exception… but I’m getting ahead of myself. Lines-wise, this guitar comes at us a little bit Gibson SG, with perhaps a smidge of Gretsch Corvette and a pinch of non-reverse Firebird in its back-angled six-a-side headstock, but the result is something entirely other.

What the photos might not immediately reveal of this luscious and creative two-tone Iridescent Grey and Bimini Coral finish (in custom-mixed, un-catalysed nitrocellulose lacquer) is that the oval coral section at the lower bout is actually routed from the wood of this one-piece rosewood body. The effect, which is set off beautifully by a strip of white binding front and back, is of some bright, raw ‘inner self’ emerging from the darker outer shell of the guitar. Nifty – and rather beguiling.

The glued-in neck is made from korina (white limba) with a bound rosewood fingerboard inlaid with ‘miniature trapezoids’, a cheeky touch. The entire guitar (other than the fingerboard) has been gently hand-aged, and whichever side of the ‘relic’ debate you land on, personally, I feel that the light finish checking and subtle tarnish suit the Stormcrow’s ethos very well.

Likely also to be beguiling to many readers are those overly large pickups. They are, in fact, Ronin’s next-generation Foilbucker SCII, humbuckers made in the sonic image of the old DeArmond gold foil single coils of the 60s, a pickup that this maker has long favoured.

They exude a quirky class in their custom stainless-steel covers with gold foil inserts, and Ronin’s John Reed tells me they were voiced specifically for this set-neck, 24.5-inch scaled guitar with ABR-1 bridge. “The sound field is tighter and more powerful than our previous Foilbucker,” Reed adds, “but with exceptional clarity and nuance. These will have a stronger fundamental and more output.”

The pickups are routed through a four-knob control section with a three-way switch, which is fairly traditional other than in its reversal of the positioning of each pickup’s controls; the thinking being, apparently, that you’re more likely to ride the bridge pickup’s volume knob while soloing, so that’s the one placed nearest your little finger (and what groovy old-style radio knobs they are!).

The CTS tone pots carry NOS vintage paper-in-oil tone caps, while the CTS volume pots are wired with treble-bleed networks to keep the tone crisp as you wind them down. The remaining hardware is quality stuff, and includes a Pigtail aluminum ABR-1 (aka tune-o-matic) bridge and stopbar tailpiece combo, and open-back Hipshot tuners.

The neck reveals itself in the hand to be a formidable creation. I like it. The rounded-C profile is beefy and full, a very mid-50s Gibson feel that lends weight to what is otherwise quite a light guitar. This results in just a little bit of neck dive when playing seated, but not so much that it’s any kind of nuisance. In any case, the guitar plays superbly, and the smoothly sculpted neck heel is a real pleasure to encounter.

Unplugged, the Stormcrow is resonant and lively, with a woody richness at its core and plentiful vibrations running right through the entire construction and into your sternum as you lean into it. A good start. 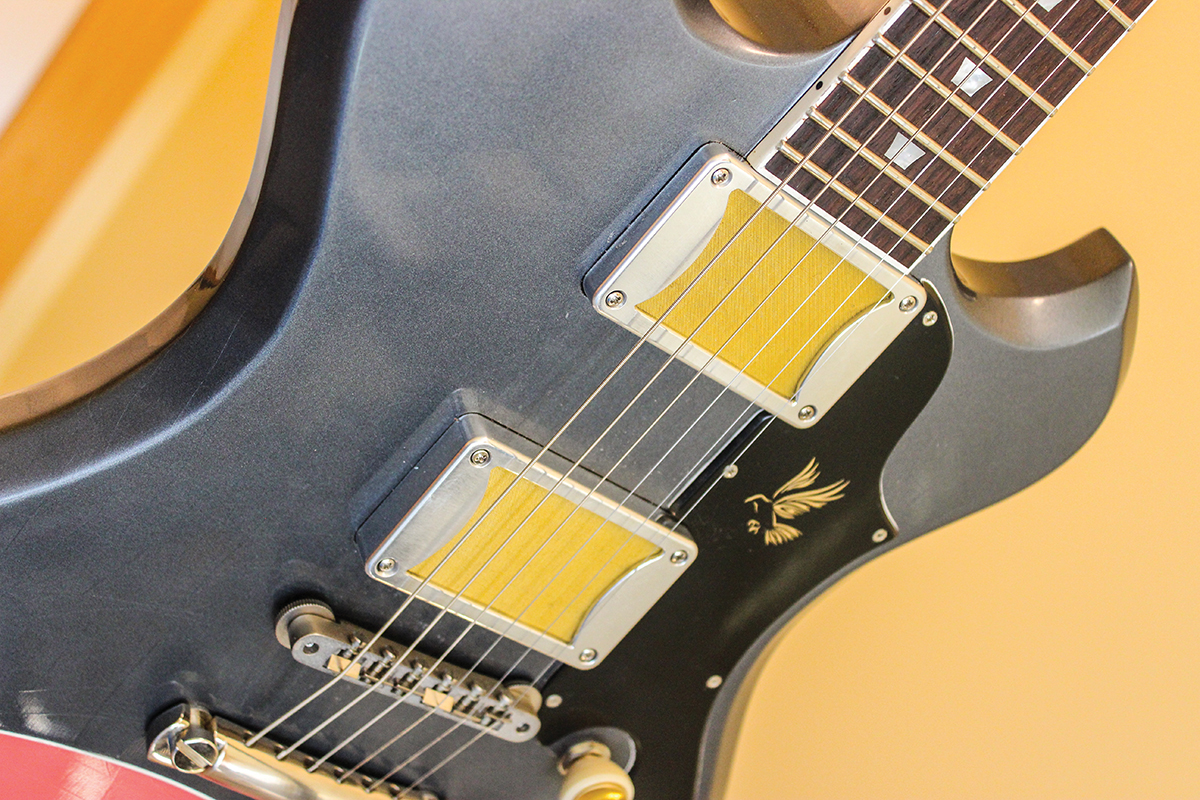 Plugged in alternately through a custom JTM45-style head and 2×12 cab with Celestion G12-65s, and an EL84-equipped Dr. Z DB4 combo with a Celestion Gold, the Stormcrow revealed chameleon-like capabilities that made it a lot of fun to spend time with.

Dive into any standard classic-rock inspired antics that you might expect a set-neck, dual-humbucker, mahogany-bodied guitar to tackle and the Stormcrow acquits itself very well. There’s enough power in these humbuckers to get a pushed amp grinding, and great sustain from the guitar itself. The Foilbucker-and-redwood combination most definitely has something all of its own going on, though, and that uniqueness of the voice inspires you to explore beyond the usual boundaries.

These pickups yield great clarity and crispness, yet with a thickness and body that you don’t usually associate with ‘clear, crisp’ humbuckers. That, and they deliver the elusive combination of edgy attack and toothsome compression that has won so many fans for the original 60s single-coil gold foils. Through clean settings, they deliver equally luscious jazz or country moods, both with a certain high fidelity that should not be equated with ‘cold’ or ‘sterile’.

Give them some overdrive, though – whether by cranking either of the amps or adding, for example, an Xotic BB Preamp to the chain – and they gush a raw, gnarly and utterly enjoyable voice that’s beautifully at home with alt-rock and grunge-blues alike. Fuzz? Oh yeah, they are utterly hairy yet never entirely out of control through a Blackout Effectors Musket in ways that few traditional pickup designs can manage – and right at home in more ambient noisescape excursions.

All in all, the Stormcrow is a righteously cool guitar offering a refreshingly minty basket of tricks, and although it’s not cheap (especially with the exchange rate at the time of writing), it’s definitely one to explore if you’re looking for something inspiringly retro-original, both in sound and in looks.