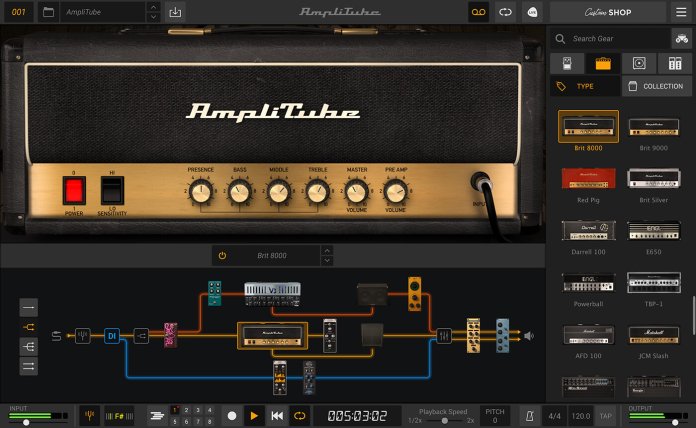 Sure, having a massive collection of classic amps, speaker cabinets, effects pedals, microphones and studio outboard in your spare room would be great… but where would you put the sofabed? On balance, you’re probably better off with AmpliTube 5.

IK Multimedia’s flagship software is a shortcut to all the gear you’ve ever dreamed of playing through – with the added benefit that you can own the whole lot instantly, without having to lug a load of 4×12 cabs up the stairs, and without having to sell all your worldly goods plus assorted bodily organs to pay for it.

Whether you’re an experienced shredder or a technophobic novice, AmpliTube 5 includes everything you need to create pro-quality guitar tones inside your Mac or PC. This is an all-in-one recording and performance studio that nails the sounds and vibes of some of the most legendary kit out there.

So, what makes it different to all the other software amps and effects systems on the market? Plenty, as it goes.

Firstly, the sheer range of virtual gear you’re getting here is immense. From timeless tweed combos to modern boutique and high-gain heads, not to mention a comprehensive array of stompboxes, the sounds of over 400 pieces of top-class guitar and bass gear have been captured. That also includes virtual speakers, cabs, microphones and recording spaces, all of which can be mixed up at will so you’ll never, ever run out of options.

What’s more, many of those sounds have been developed in collaboration with big brands (such as Fender, Orange and Mesa Boogie) and big names (such as Slash, Brian May and Joe Satriani) – the kind of star roster that rival products can only dream of. If you’re looking to recreate the tones that defined some of your favourite records, you know you’re in good hands here.

Of course, just as important as the range of sounds on offer is their realism – and here again AmpliTube 5 has the edge, thanks to impeccable attention to detail in the software’s development process. IK has refined its Dynamic Interaction Modelling (DIM) technology to reproduce the exact sound and feel of each piece of equipment, while Volumetric Impulse Response (VIR) tech has captured over 2,400 impulses per speaker cabinet to create a tweakable 3D sonic picture that’s so close to the real thing it’s uncanny.

And it’s not just about the sounds themselves. This is a superbly well-designed app, with an intuitive user interface that keeps everything simple and lets you focus on the fun part: actually playing. Hopping between different amps, effects, cabs and microphones is a simple drag-and-drop process, while you can move mics around, swap out individual speakers and even switch rooms much more easily than would ever be possible in a real studio. The choice of spaces ranges from dry studio rooms to an extra-vibey garage and even a tiled bathroom (random background toilet-flushing noises not included).

You can create multi-amp rigs using up to 57 bits of gear at the same time, and it really does take just seconds to create a completely new signal path by picking out the goodies you want and dragging them to where you want them. Signal routing can be just as complex as you want it to be, from a simple chain of stompboxes and a single amp to a wet-dry-wet rig that would take hours to set up in the hardware realm – and let’s not even think about all the cables you’d risk tripping over.

It’s as customisable as amp software gets, and new to this version is the ability to load up any speaker cabinet impulse responses (IRs) you already own.

You’re also getting bonus features like a looper, an advanced tuner and a built-in eight-track DAW – so you can start getting those killer riffs recorded as soon as you come up with them, as well as using AmpliTube 5 as an AAX/VST/AU plugin within your usual multitracking software.

If all this sounds complicated, don’t worry: it’s a supremely easy piece of software to set up. After a quick download and install, this is a genuine plug-and-play experience – you won’t have to waste half a day fiddling about with preferences before you can enjoy those classic tones. And naturally, you can count on instant integration with other IK products such as AXE I/O, iRig Pro Duo I/O and more. There’s even a live performance mode, making this a perfect partner for the iRig Stomp I/O.

Already been introduced to the joys of AmpliTube? There are special deals for crossgrading or upgrading from other versions of the app. Never tried this kind of thing before? There’s an absolutely free version, AmpliTube 5 Custom Shop, that retains the essential features of the full-fat software with a stripped-down selection of kit. Best of all, if you want to use the CS version as your starting point and add more amps and pedals later, you can try each one for 72 hours before buying.

See what we mean about it making more sense than a room full of real classic amps? Might as well leave that sofabed where it is and just buy a couple more guitars to lean against it…

In the meantime, find out more about AmpliTube 5 here.