Beginner or pro, a good practice amp can be a great addition to your collection. 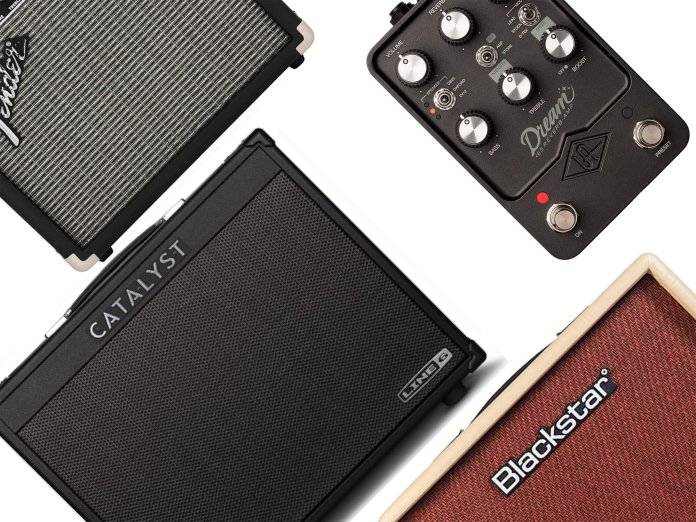 Are you a beginner looking to dip a toe into learning guitar? Or are you a seasoned player who just doesn’t want to have to power up a 100-watt full-stack to run through your scale exercises?

Either way, a good practice amp is what you need. Let’s take a look at the best.

What makes an amp good for practice?

Most practice amps focus more on connectivity and convenience than they do on great tones or in-depth tone editing. You’re less likely to see parametric EQs and effects loops on this list; instead, things like battery power for practice on the road, headphone jacks for silent late-night sessions and a compact design so as to not clutter your desk are more common selling points.

The actual sound of the amp should still be a consideration, however, but not as much as for an amp for performance or recording. Most practice amps have some good bog-standard clean tones, but depending on budget you might want to take a listen to the on-board overdrive sounds if you’re planning on playing a lot of rock and metal.

Onboard effects might seal the deal for you, as they mean if you just want to plug in for a quick practice session you won’t need to set up your pedalboard, but don’t expect studio-quality reverbs or five different kinds of harmonic tremolo here. Instead, the amps that do have onboard effects focus on covering the basics well, which is ideal if you don’t want menu-diving or parameter tweaking to get in the way of actually practising guitar.

The best practice amplifiers to buy in 2022, at a glance: 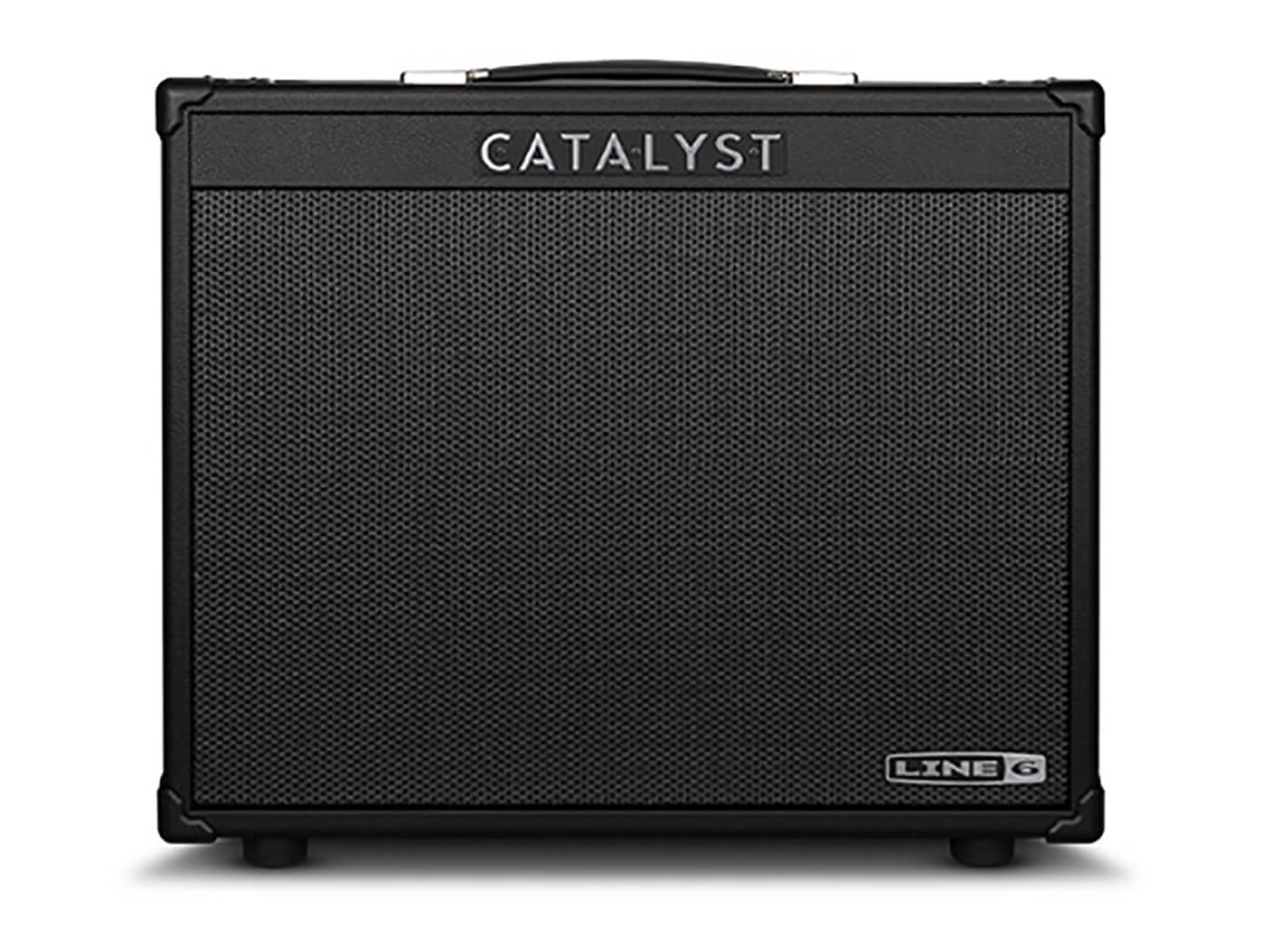 The Catalyst 60 is Line 6 making a stand for its place in the modern modelling amplifier market. It’s a very fully-featured combo amplifier, especially given how affordable it is. There are six preamp models with a huge range of gain levels, all the way from pristine clean to full-bore metal. There’s also a whopping 18 on-board effects, drawn from Line 6’s excellent HX library – but if you’d rather use some pedals, there’s an effects loop so you can do just that.

The amp is controlled by a set of physical knobs, which is good news for those averse to diving into menus. Practice-friendly features include an eight-inch auxiliary input for plugging in your own music, direct output via a headphone jack and an XLR socket, and a power reduction switch that can drop the amp down from 60 watts to 30 watts, to half a watt, to zero watts – perfect for keeping volume levels under control.

And if you’re ready to move from the bedroom to the stage, then the Catalyst 60 has more than enough power to play live with – and some great tones to boot. 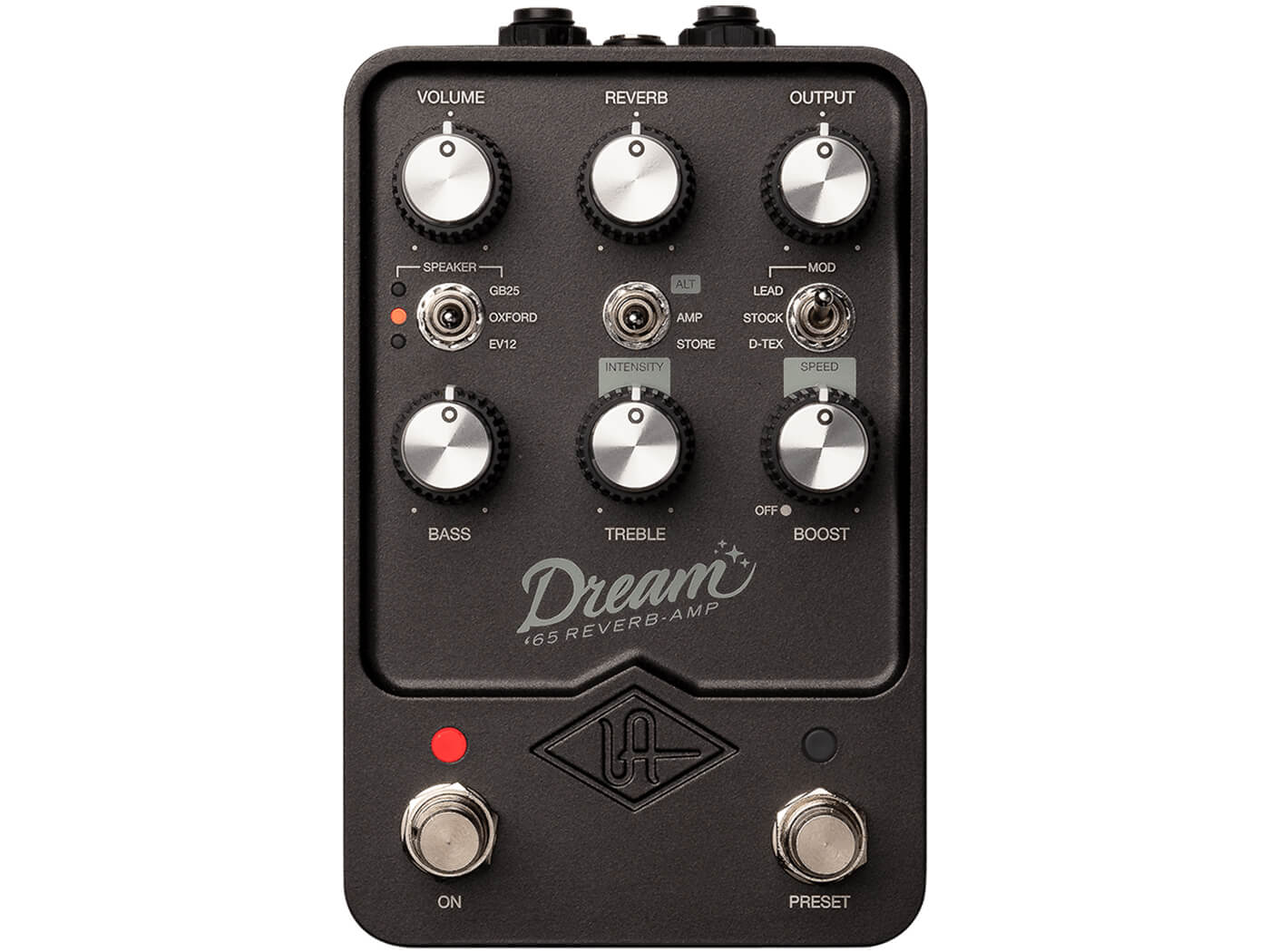 The UAFX Dream ‘65, you might notice, looks a lot like a pedal rather than an amplifier. But in this little box you’ll find an exacting digital replica of a 1960s black-panel Fender combo amplifier, complete with tremolo and reverb, a preamp boost and some incredibly precise speaker simulations.

The Dream ‘65 is perhaps not an ideal practice solution for a beginner: converting the pedal’s dual-quarter-inch jacks to a stereo headphone connection requires either an audio interface or a bespoke converter, there’s no auxiliary input, and for the price, you’re getting just one amplifier model. But if you’re a tube amp aficionado, and know exactly what sounds you want, and need them accessible via a small, portable box with stereo outputs and Universal Audio’s brilliant speaker simulation, there’s no better solution. 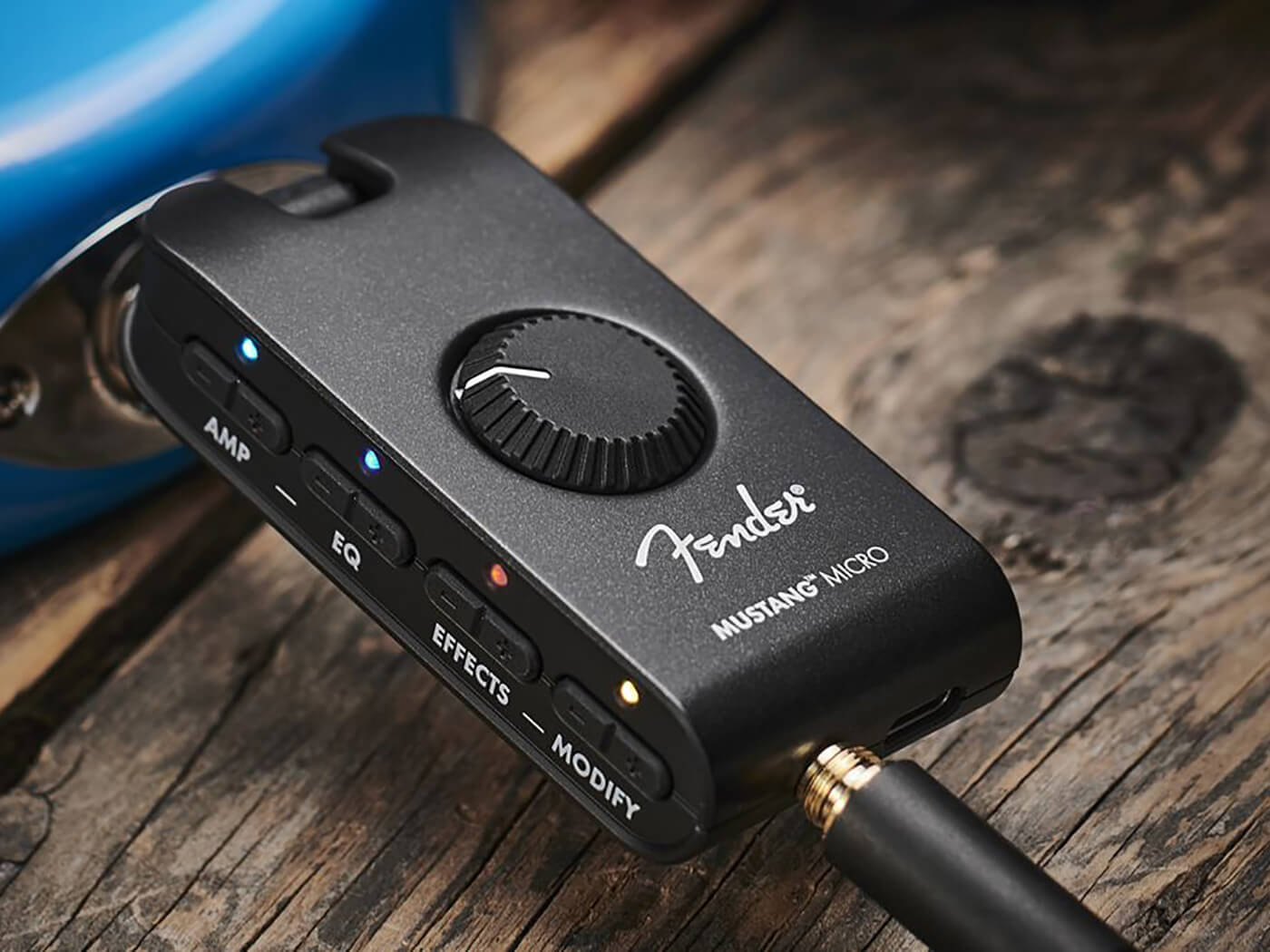 + Supremely portable
+ Sounds great, especially for a headphone amp
– No gain control on the amp models

The Mustang Micro is the most modern reinterpretation of the pure “headphone amp” concept: like those that came before it, its form factor is a small unit that connects directly into your output socket. You can then connect a set of headphones for silent practice. But that’s about where the similarities end, as the Mustang Micro sounds a lot better than basically every other unit of this style, offering a range of digital amp models and effects borrowed from the Mustang GTX combo amplifiers.

Effects comprise combinations of delays, reverbs and modulations, while amps run the gamut from classic Vox and Marshall to modern Mesa, EVH and Bogner-inspired models, with a healthy smattering of bona fide Fender emulations thrown in.

Connectivity is very “2022”, too – alongside a headphone jack, there’s a USB-C port to charge and record directly from the unit, and bluetooth connectivity rather than an AUX jack for backing tracks, especially handy in this case as it reduces the number of wires dangling straight off your guitar. 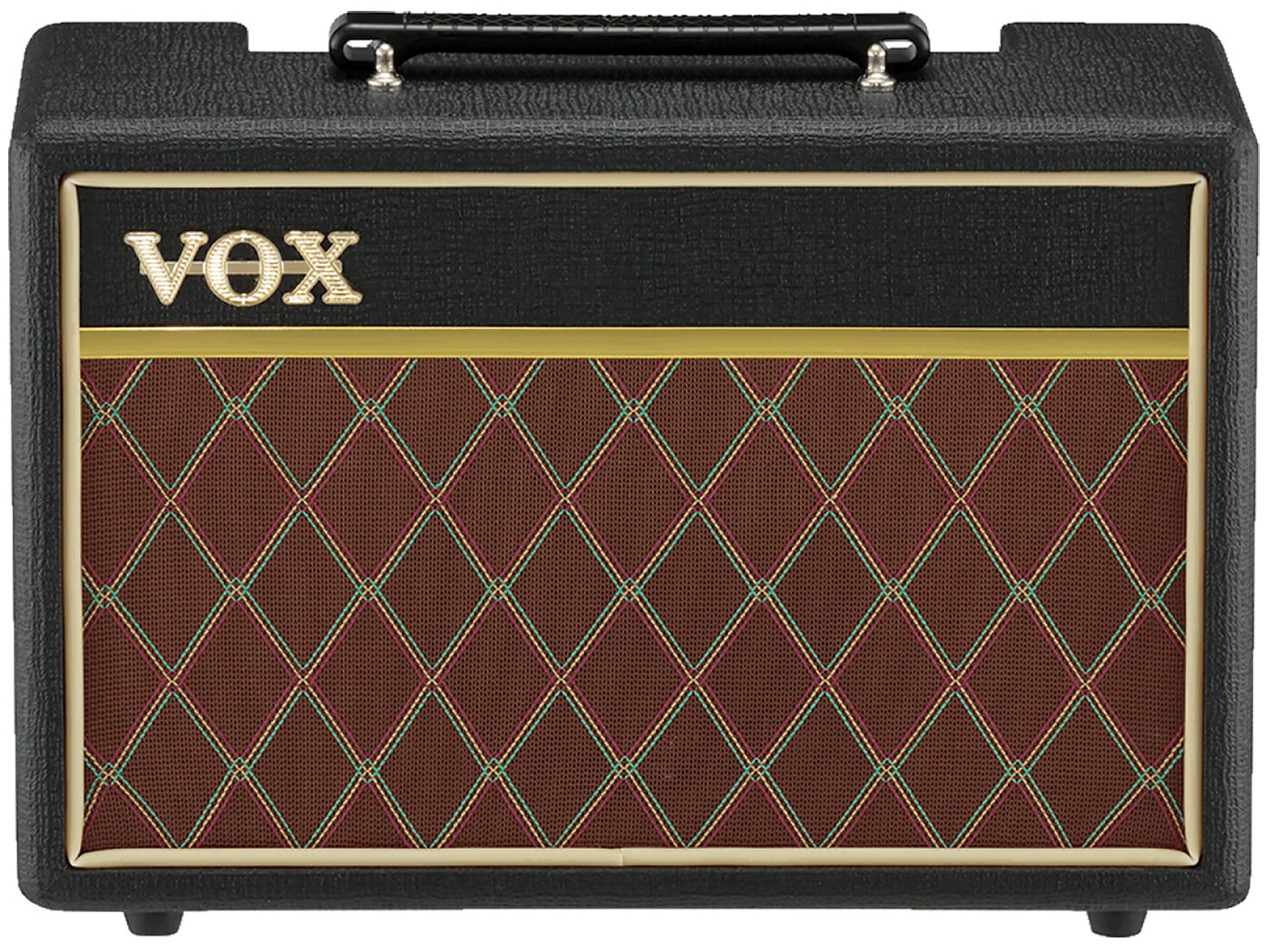 A more “traditional” practice amplifier, the Vox Pathfinder 10 is as straightforward as it gets when it comes to compact combos. It boasts both an overdrive and a clean channel, controlled by volume and gain controls, as well as a two-band EQ. There is a headphone/line-out jack, however, there is no auxiliary input – to practise along to your own music you’ll have to run the line-out into a mixer or interface to blend in your own tracks to headphones, or just play out loud.

What it lacks in connectivity it makes up for in sound. Both channels are voiced after classic Vox amps, so don’t expect crushing high-gain, but it’ll handle crunchy rock tones just fine. The solid-state circuitry does a great job of creating a responsive, characterful sound (especially given the price), rather than the flat, sterile and fizzy tones that can be common in amps like these. Given the 10 watt power rating it can also double-up as your first foray into recording mic’d up amplifiers. 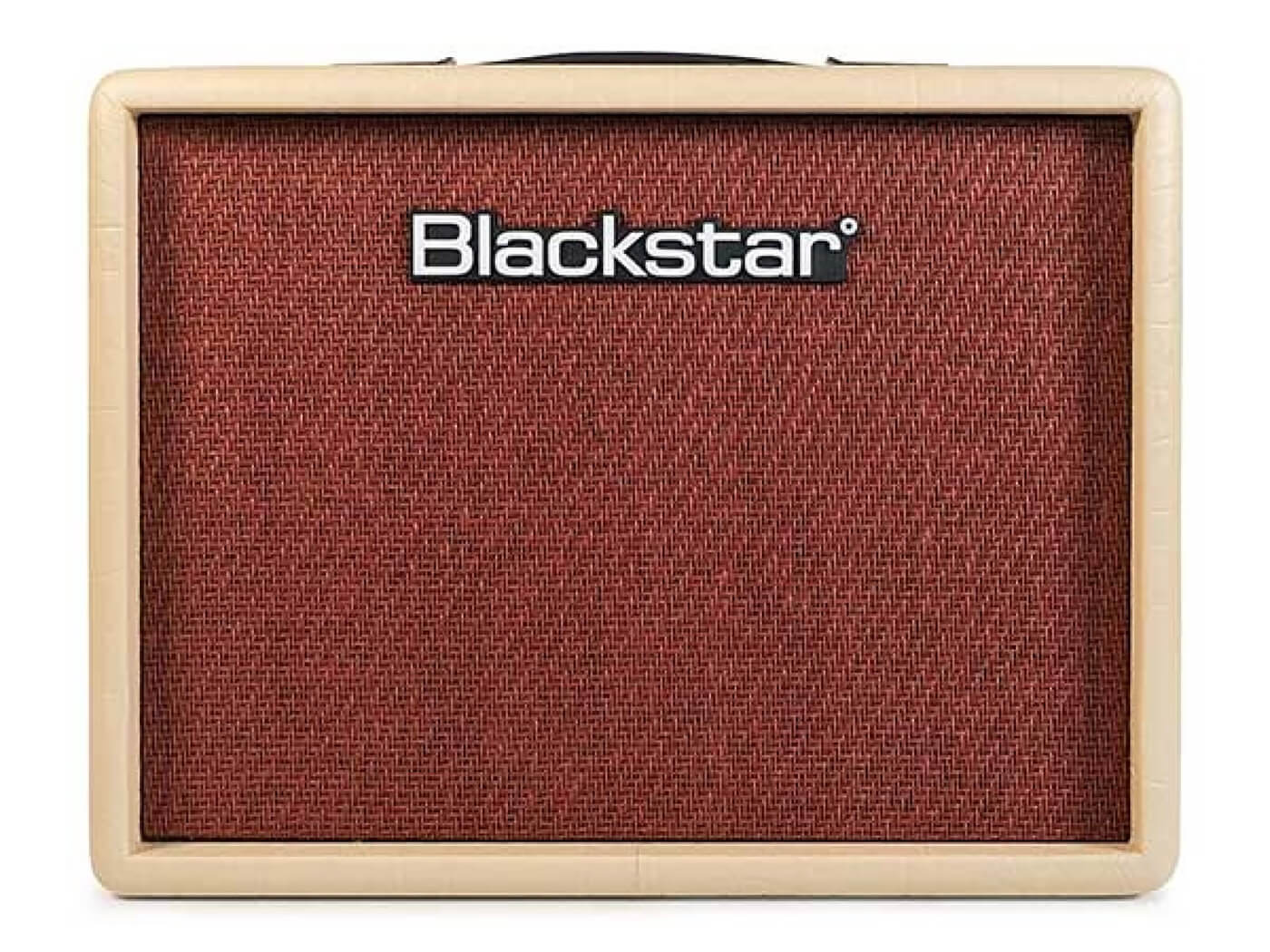 Blackstar has a great reputation for tiny little practice amplifiers: its Fly 3 (further down on this list) is undeniably the best-sounding battery-powered amp you can get for under £100. The Debut 15e is a more powerful amp that isn’t battery powered, but does have some extra punch to make up for that.

The amp’s sounds are just as great as the Fly 3, and there’s a similar on-board tape delay. There’s also Blackstar’s ISF control, a single knob that adjusts the whole EQ character of the amp across its sweep, changing from traditionally American to traditionally British amp tones. The amp has both a clean and a drive channel, and thanks to the ISF control and a healthy range of gain, it’ll offer up everything from scooped chugs to hairy rock overdrive to sparkly cleans. Connectivity-wise, there’s an eighth-inch headphone jack as well as an auxiliary input for your own backing tracks. 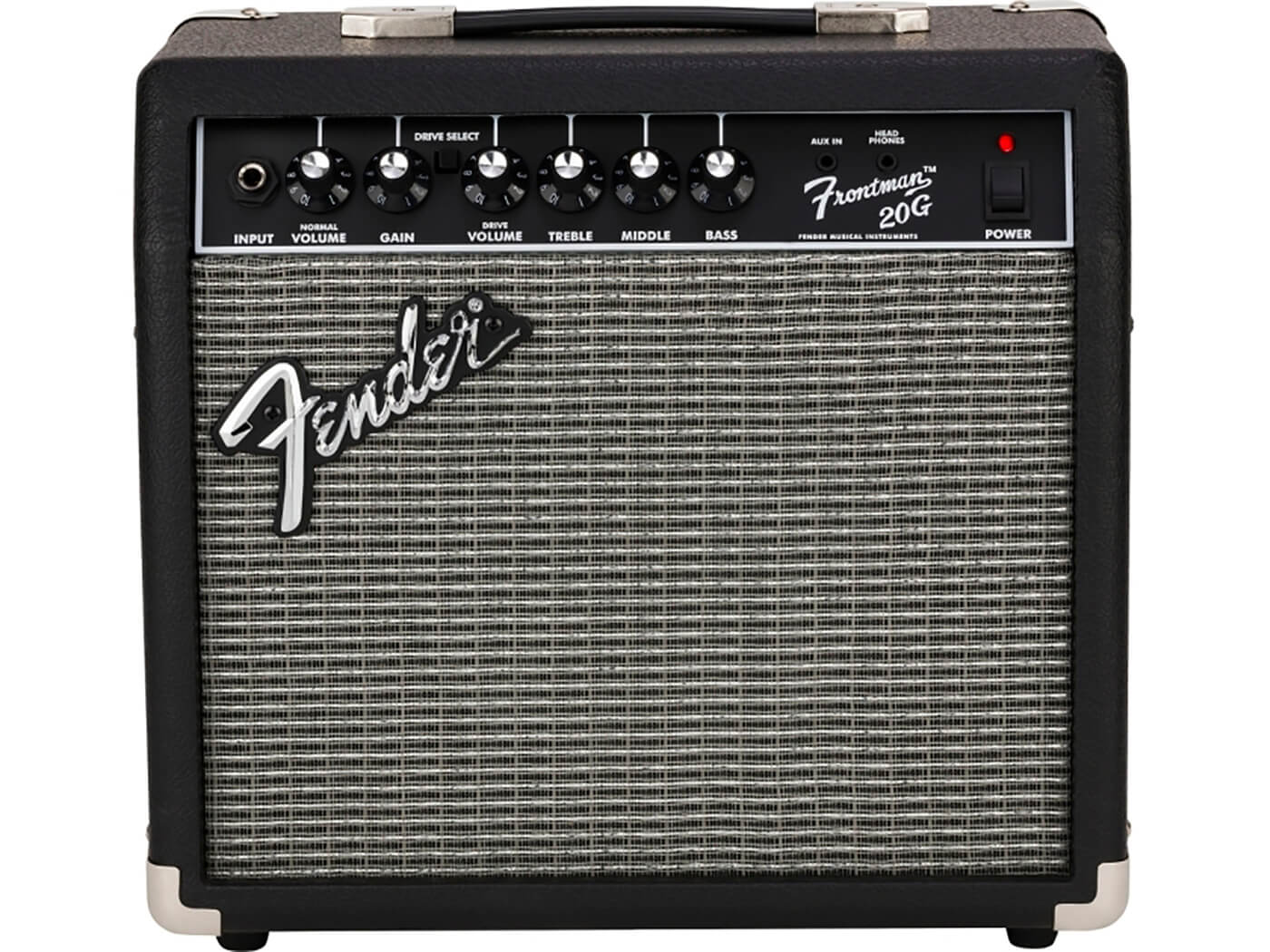 Does Fender’s Frontman 10g sound intriguing, but perhaps a little underpowered? The Frontman 20g is here to solve that. As the name implies, it’s a more powerful iteration of the 10g and 15g practice amps, boasting an eight-inch speaker driven by a 20-watt

There’s a good amount of control over your tone, with both a driven and a clean channel (each with their own volume control) and a three-band EQ, and a gain control for the drive channel.

It’s not a revolutionary spin on the formula, but it’s a well-executed one, and one backed by Fender’s heritage as an amp designer. As with Vox’s Pathfinder 10, the brand’s iconic visuals are on display here, making the amp a welcome addition to any living room. 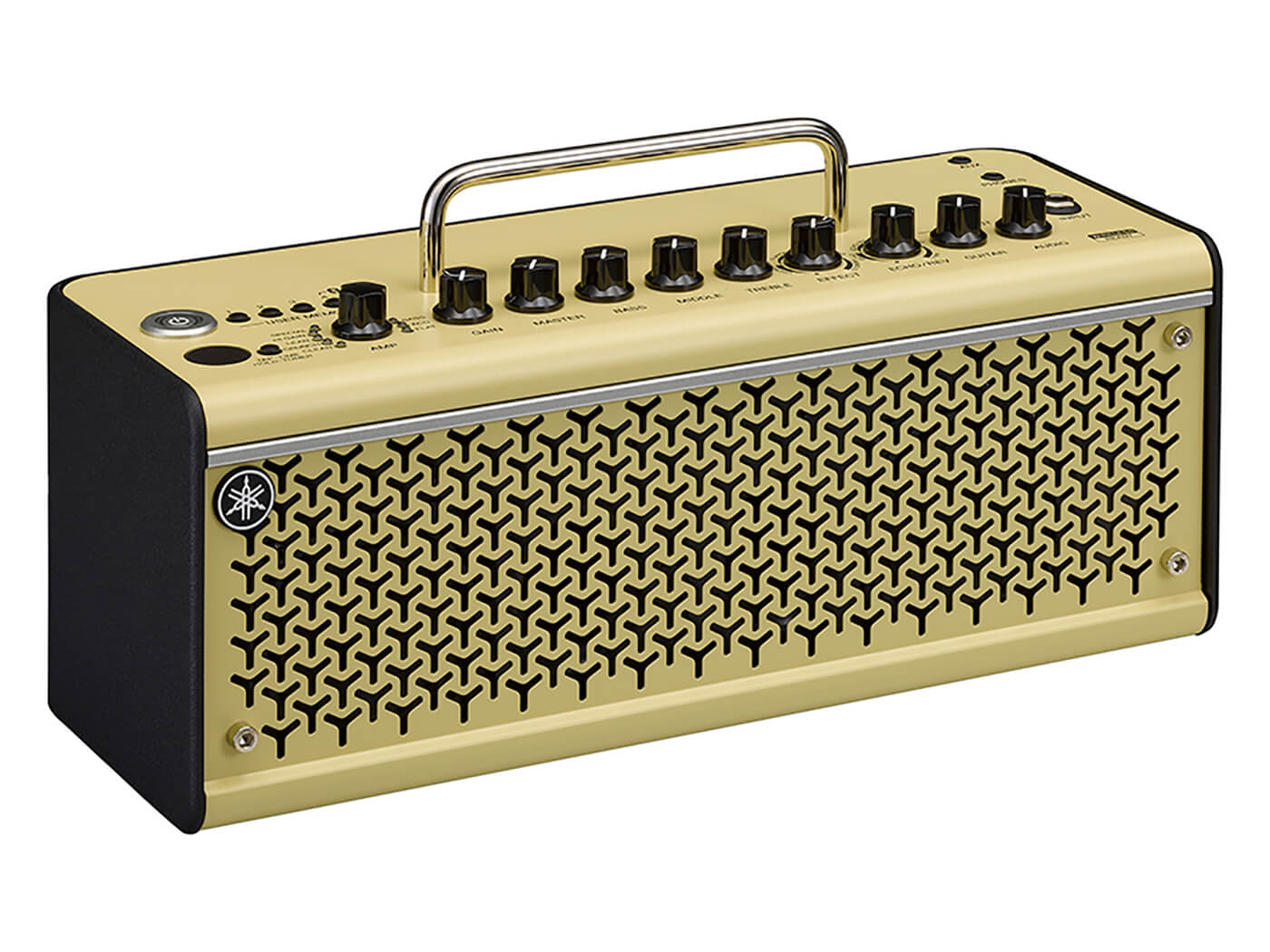 Controls on the amp are fairly standard, but you also have the option of controlling the amplifier through the THR Remote app via Bluetooth. This functionality also allows playback of music through streaming services. To top it all off, the amp boasts wireless capability, so you won’t have to deal with cables. The caveat for this feature, however, is that the Line 6 Relay G10T transmitter is sold separately. 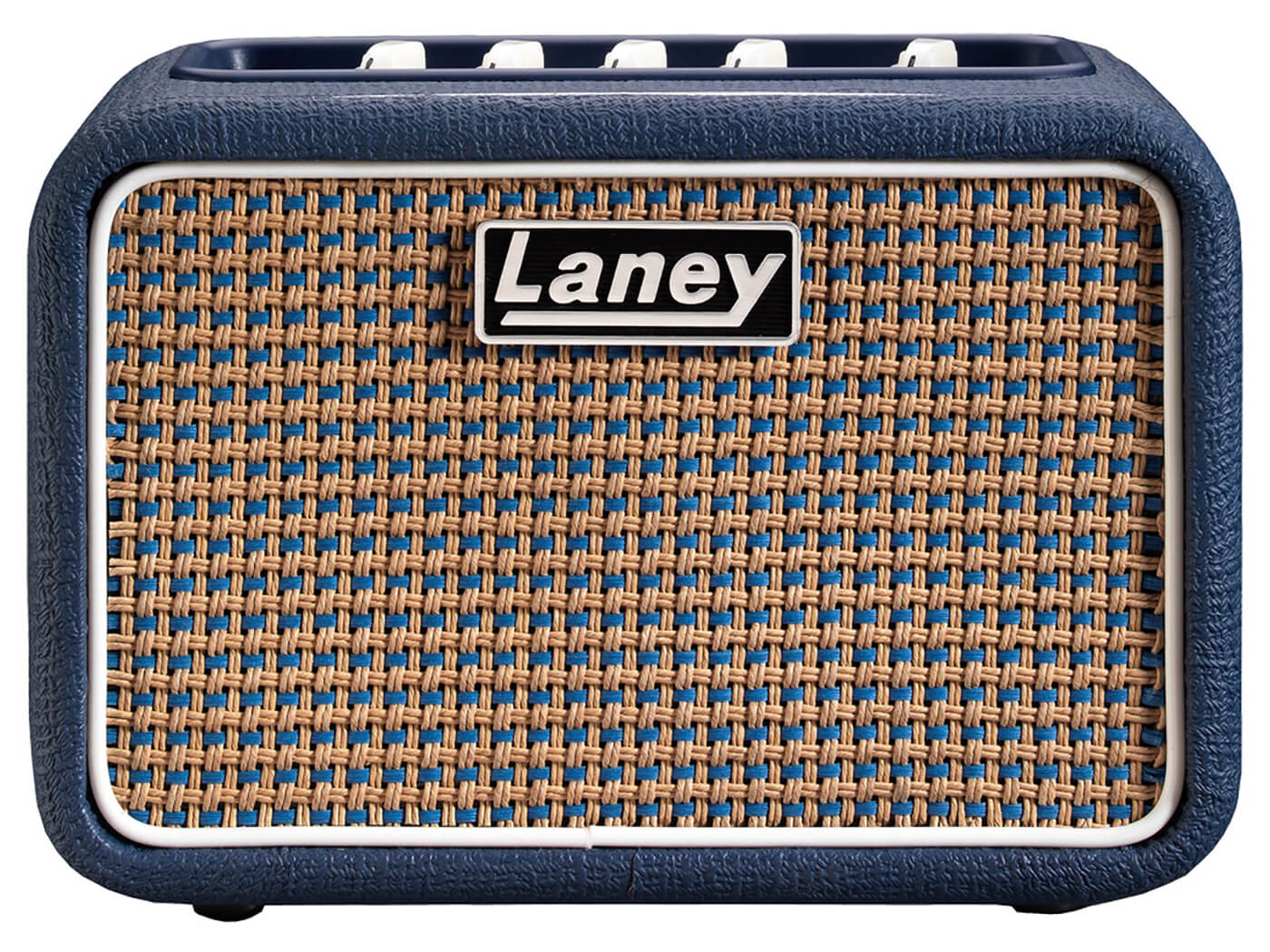 + Affordable
+ No-nonsense design but good connectivity
– Could be louder

If you’re in the market for an affordable, no-frills practice amp, the Mini-ST Lion may just be it. It’s a three-watt, battery-powered amp featuring a pair of three-inch drivers and two channels: Clean and Drive. Controls are as straightforward as they get, with dials for gain, drive, level, tone, delay, delay level and volume.

The most “superfluous” addition to this amp is the Laney Smart Interface socket, which allows you to connect the amp to a phone or tablet. This lets you tap into tones offered by a variety of apps, including Ultimate Guitar’s Tonebridge, which offers over 1,000 guitar and bass tones. As a nice bonus, purchase of this – or any Laney Mini amp – comes with a free three-month subscription to Tonebridge. 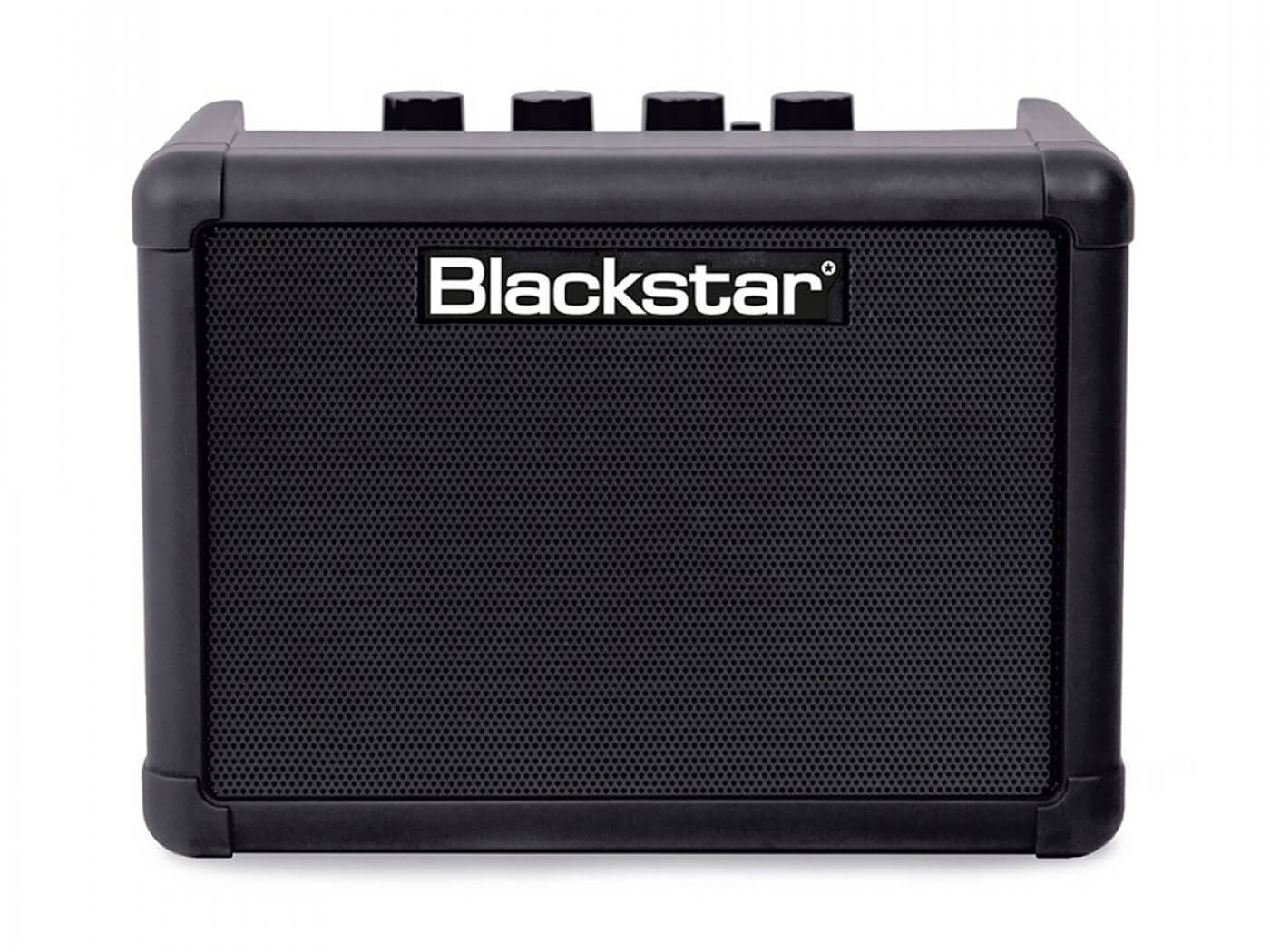 Quite possibly the most value-for-money option on this list, the Blackstar Fly 3 is a three-watt mini combo that features two channels, an emulated tape delay, an MP3 / Line In and the brand’s patented Infinite Shape Feature (ISF) tech. The latter gives you access to both British and American voicings, while the MP3 / Line In is perfect for guitarists who want to jam along to their favourite tracks. In terms of power, the Fly 3 takes six AA batteries or DC, if bought as a Stereo Pack (comes with a FLY 103 extension cabinet and power supply). 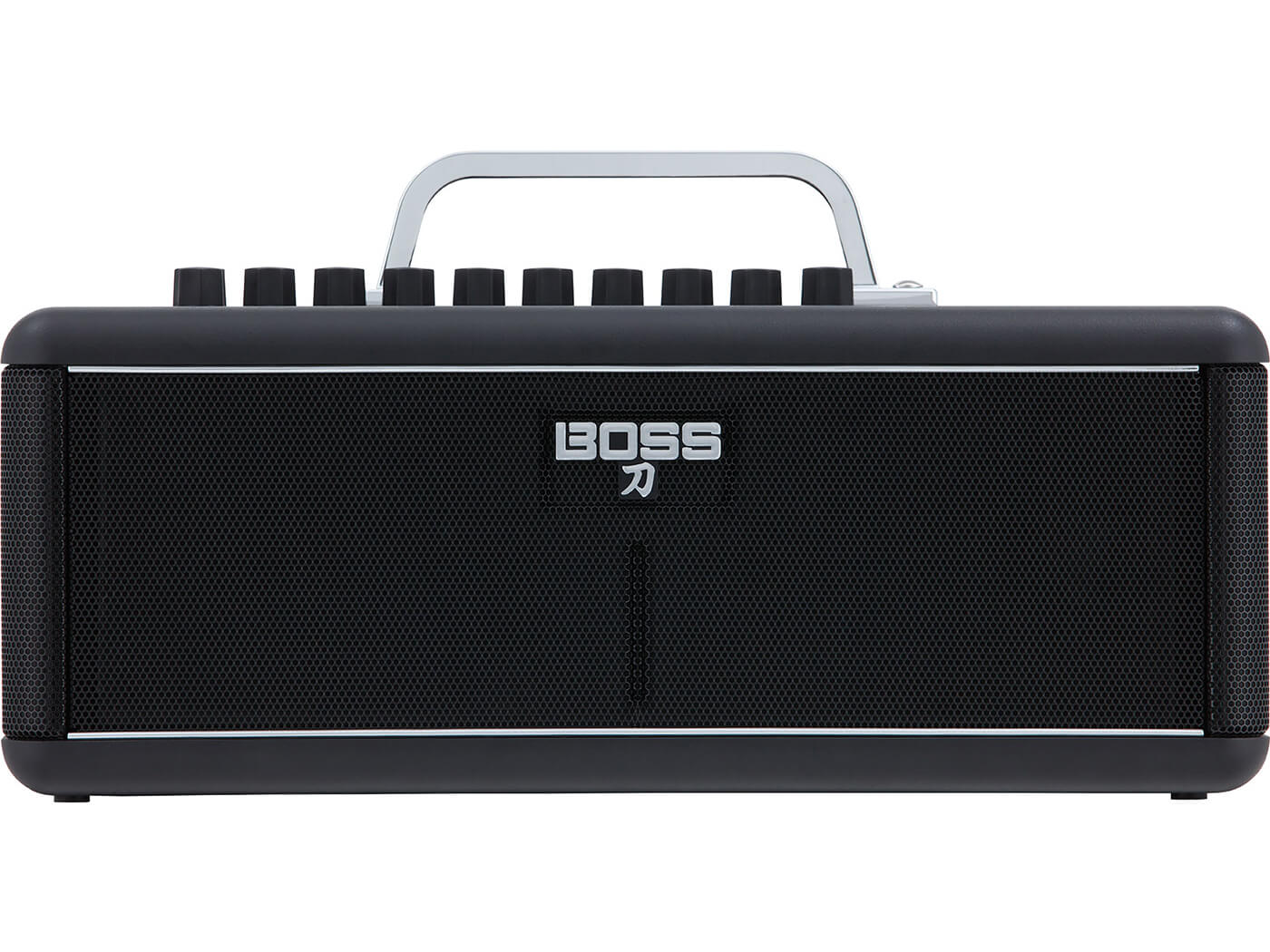 It’s not enough to have the title of “world’s first wireless amp” – you also need to have the substance to back it up. Boss’ Katana Air packs 30 watts of output, five amp models and over 50 Boss effects into a simple handheld format no bigger than a guitar tech’s toolbox. A single full charge powers the Katana Air for 12 hours, but you can also use eight AA batteries to provide 20 watts of output for seven hours.

The standout feature on the Katana Air is its stereo headphones/recording output, which lets you record directly into a DAW or practice silently with full stereo sound. There’s also the option of playing along to music streamed wirelessly from a mobile device via Bluetooth. 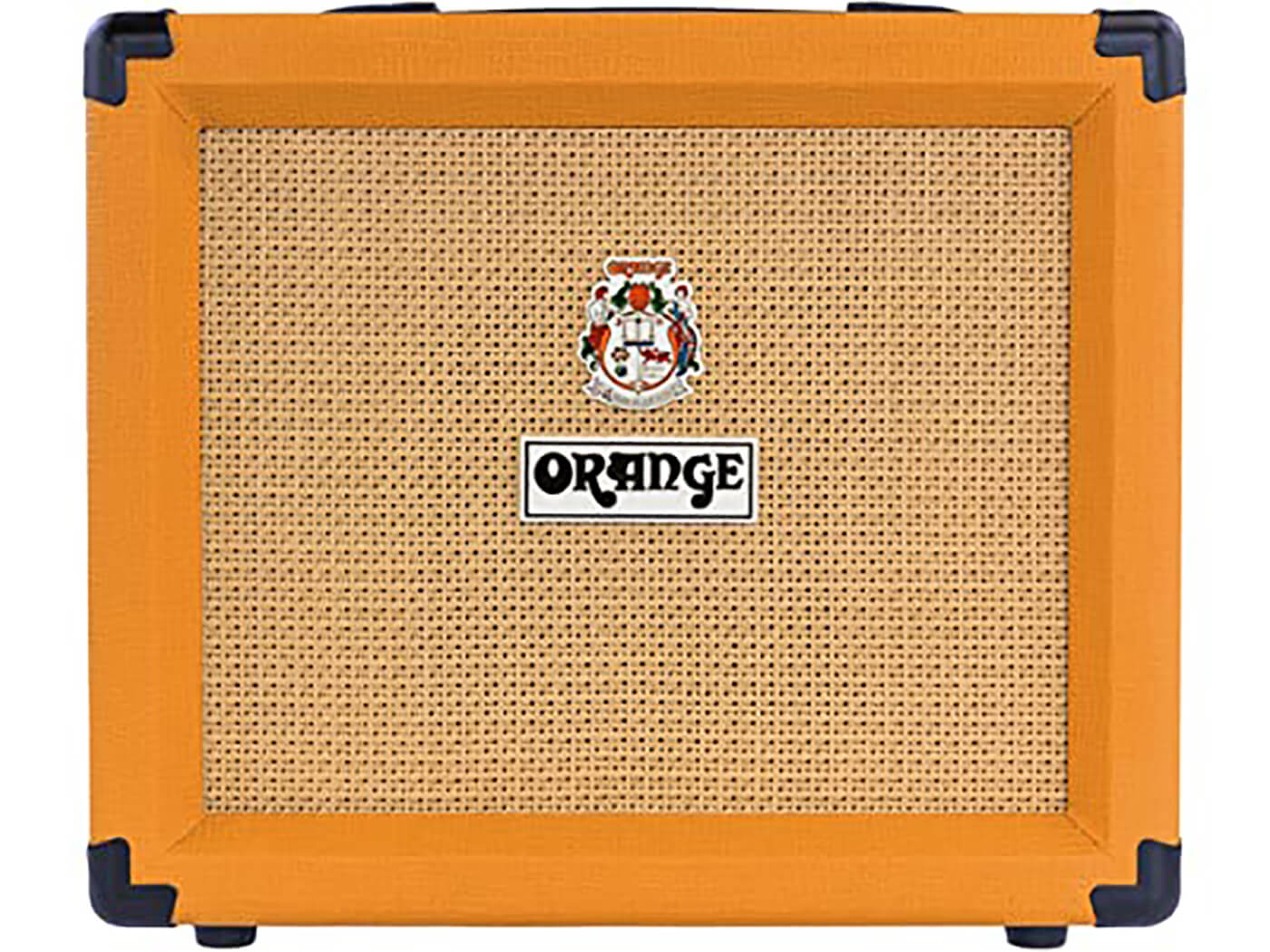 The Orange Crush 20 is perfect for bedroom distortion addicts thanks to its high gain preamp design. The amp features four stages of gain, taking it from chimey cleans to classic bluesy crunch to full-bodied metal distortion. You can also switch between the clean and dirty channels seamlessly with the Orange Crush 20’s optional footswitch.

The amp’s headphone/line output does more than it lets on. Plugging in allows guitarists to take advantage of Orange’s CabSim feature for silent practice and direct recording. This offers a faithful emulation of a mic’d Orange 4×12” cabinet loaded with the brand’s flagship Voice Of The World speakers. 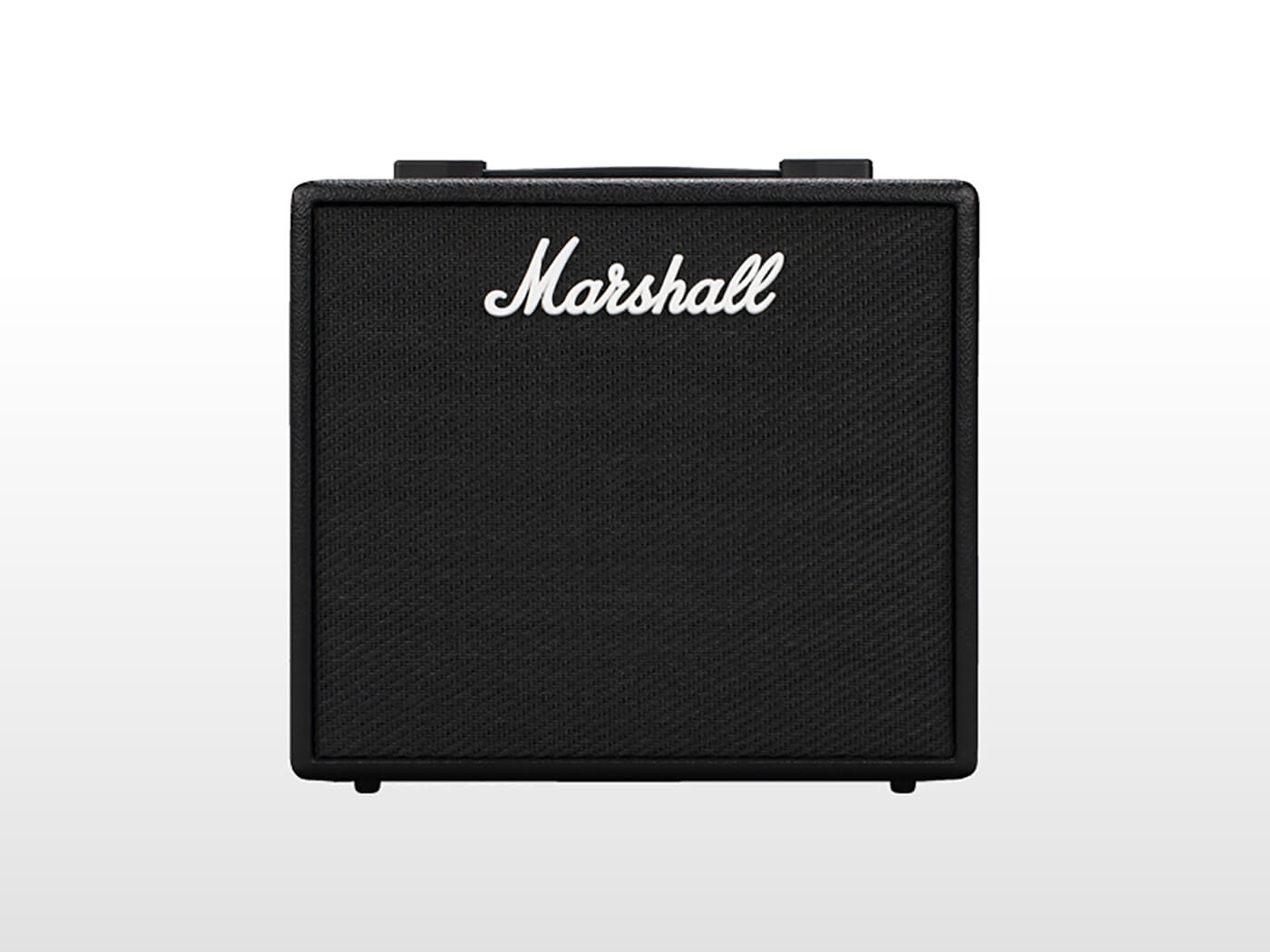 With 100 pre-loaded, fully editable presets, it will take a lot to get bored with the Marshall CODE25. The 25-watter comes with 14 Marshall-Softube (MST) preamps, 4 MST power amps and 8 MST speaker cabinets – perfect for tone experimentation. User-customised presets can then be uploaded to the global library using the MyMarshall cloud service for storage and easy retrieval.

The CODE25 also comes with 24 different built-in effects, five of which can be run simultaneously. Additional amp controls can be retrieved with the Marshall Gateway app, available for both iOS and Android devices.