Let’s just say this Eric Clapton Stratocaster arrived in kit form with no guarantee that the electronics are working. There’s only one way to find out.

Like all the best Clapton Strats – going back to 1970 – this instrument is a collection of disparate parts. It has been in bits for the last few years, however, and it was pretty wrecked when the owner, Mr Chris Buck, bought it. Chris got a bargain because it came with a non-original body that looked like it had been routed “with a dessert spoon”. Happily, this was recently replaced with a near-mint Pewter-finished genuine Fender body found on Reverb.

The neck dates to 1993 and has extensive playwear. Unfortunately, the electronics have been playing up but, having found the body, Chris decided it was time to put this guitar back together. Or to be specific, it was time for me to do it. After all, we share some history with derelict Stratocasters.

Besides the soft V neck profile, Clapton signature Strats are best known for their distinctive electronics. There are two main components to this: Lace Sensor pickups and the onboard preamp/active equalisation.

The volume control operates as usual, but the tone control has a centre indent to mark the null point, and provides treble boost as well as treble cut depending on which way you turn it. This control acts on all three pickups. The second ‘tone’ knob actually controls the preamp and adds up to 25dB of midrange boost.

All Chris can tell me is that he’s not sure if the electronics are working. Besides a flat battery, I figure it could be either the pickups, the preamp or both. This project begins with a bit of troubleshooting.

If you plan to do regular work on guitar or amp electronics, a multimeter is essential. Rather than assemble everything straight off and hope for the best, I decide to test the pickups first.

Although they look fancy, Lace Sensors are simply passive pickups with three lead-out wires. Here the orange wires are connected to the five-way selector switch, and the white and green wires are soldered to the volume pot casing – all except the neck pickup, which isn’t connected at all.

Setting my multimeter to its 20k resistance range, I get a 5.7k reading from one pickup, but nothing from the other two. As fault-finding goes, it’s an encouraging start, and Chris has provided a set of brand-new Lace Sensors just in case.

You shouldn’t work on projects like this without referring to a circuit diagram and a Google search usually produces the necessary results. Here, Chris is a step ahead of me, and the diagram he provided shows a stereo output socket with three solder tags.

Chris’ pile of parts includes an unusual switching socket with four tags, but there’s a new stereo socket attached to the socket cup. I decide to use the new one and temporarily solder the circuit ground, audio output and battery negative wires as shown on the schematic.

With the new Lace Sensors mounted on the pickguard and soldered in, I connect a healthy battery to the battery clip and connect the output to a guitar amp. It’s all quite noisy, but when I tap the pickups I discover they’re working and the controls all appear to be behaving as expected. I attribute the noise to a grounding issue and decide to press ahead with installing the electronics into the new body.

The preamp circuit board is only attached by the solder joints that link it to the controls, so the whole assembly needs to be handled carefully. Although the board has a screw hole at each corner, Fender only used two, arranged diagonally with plastic spacers placed between the body and the board.

I find a couple of self-tapping screws that seem about the right length and diameter. Although it’s a bit fiddly to keep the spacers in position, I manage to reinstall the board in the hole that’s routed just beneath the pickup cavities.

The board’s lead-out wires pass through a channel into the control cavity, where there’s a hole for the battery clip. The battery is mounted at the rear of the body, in a recess that’s added to the side of the vibrato spring cavity. It wedges in tightly and is held in place by the cover plate.

Finally, there’s a small indent to the side of the control cavity with a screw used for another ground wire that has a metal connector soldered onto the end. Presumably there’s conductive paint lining the cavities and this adds a further level of noise shielding. It certainly seems to work because when I perform a final check before fixing everything down, the only noise I can hear is coming from the amp. The guitar itself is completely noiseless.

Inspecting the neck closely, I notice that it has been refretted and the fret ends are protruding from the board, along with several hard Super Glue bumps. After giving the neck a good clean with naphtha, I use my fret-bevelling tools to smooth the fret ends and then tidy up the bevels on both sides.

I round the bevels over with a needle file and polish out any scratches with wet and dry paper followed by 4000-grit Micro-Mesh. The Micro-Mesh also restores the frets to a nice shine. Normally, I would protect the finish with masking tape, but the lacquer Fender was using during the early 1990s can be very brittle and tends to pull away when protective tape is removed. 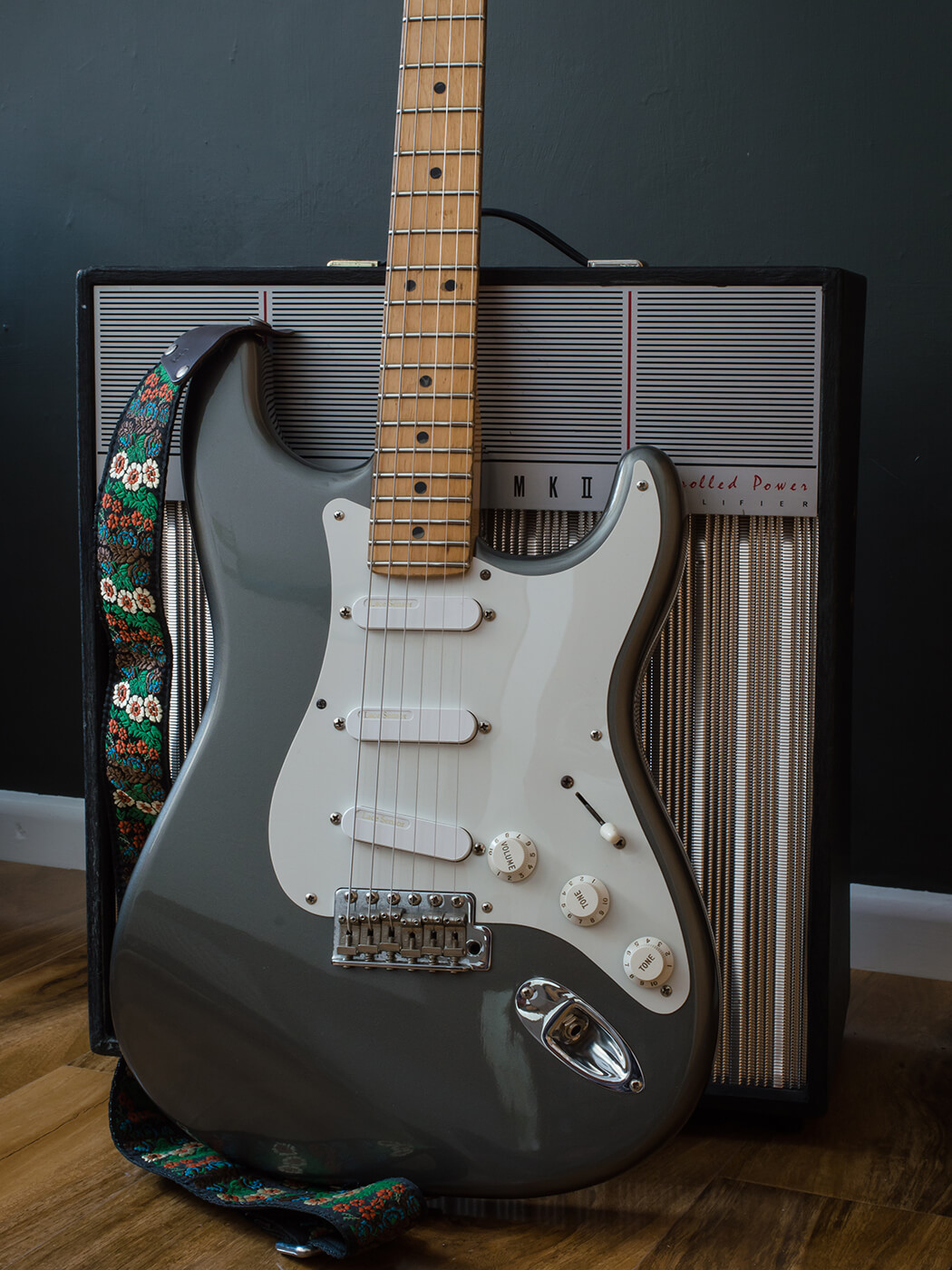 With the neck looking and feeling a lot better, Chris’ guitar gets a fresh set of strings and a setup. It might benefit from a fret levelling in the future, but for now it’s good to go.